the 1960s, the Bay Area’s repertoire of Chinese dishes has continued to expand beyond its Cantonese roots. You could eat at Bay Area Chinese restaurants every night for a month, devoting each meal to a different region of China, ethnic group, or international community, and never repeat a restaurant or style.

I’ve updated the original post to reflect changes since May 2021: lots of closures and nearly 100 new restaurants.

As a lame and inaccurate placeholder, I dumped a bunch of regionally diverse and/or chef-driven dumpling/bao/noodle focussed restaurants into the “Other Northern and Jiaozi /dumplings or bing” category. These include places anchored by XLB and SJB but which have no other Shanghainese signatures; and chains like Dumpling Time, the 4 Sisters group, etc.

Geez, this project will soon enter its tenth year… and its age shows, both conceptually and technologically. Chowhound, where the project originated, is kaput and there hundreds of dead Chowhound links in the original post. I’ll either point them to backed up pages on the Internet Archive, or delete them… I’d like to preserve/credit community members who helped inform this list, but I’m not sure how useful 8+ year old restaurant advice is.

A few closures to report:

Momo Chang just posted an updated Guide to Chinsee Regional Restaurants in the Bay Aea at SF Eater. Momo and our own Hyperbowler with others worked on the award-winning series five yeears ago at the SF Chronicle, Many Chinas, Many Tables. 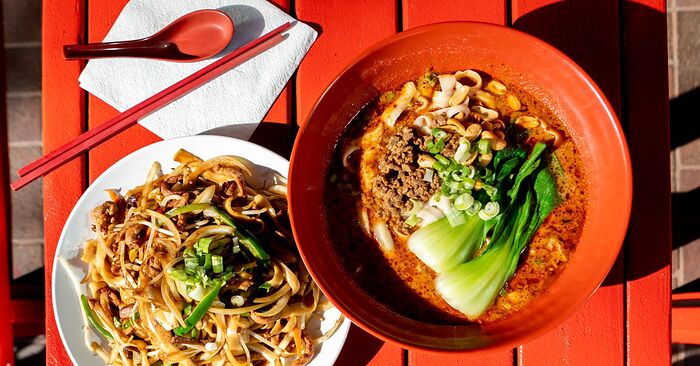 A Guide to Chinese Regional Restaurants in the Bay Area

I stopped by a place in the Sunset, on Noriga, called SoHoMei. They used to be called Pho Sure, but instead of selling pho, they mostly sold Chaozhou (Teochew) cuisine, and I think they recently rebranded their name to match what they were actually selling.

Their Chaoshan beef balls were some of the bounciest beef balls I’ve ever had, and their Chaozhou pan fried oyster cake and Shantou rice rolls were also dishes that were very unique to that region of China that I’ve never seen anywhere else in the Bay Area. Overall they were excellent.