The late-night hours and array of grilled skewered meats brought me to BBQ King last week. My priorities switched when I saw “stir fried chicken rac” on the menu, a dish of fried chicken bones resembling a dish I’ve been hunting since eating at Shen Yang in LA.

The young woman who works at the front of the house confirmed that both she and the chef are from Shenyang, a city in northeast (dongbei) China, close to Korea. I asked her to point out the Shenyang specialties, and in addition to the ones I ordered, she was enthusiastic about the candied sweet potato, the fried tofu pepper, the north east wonton, the pork dumplings, and the shrimp vegetable dumplings (shrimp, chives, egg).

Their “cold noodles” are a version of Korean Naengmyeon. The noodles had a tremendous amount of elasticity, like rubber bands, and were pleasant to chew. Fun to eat— the concentration of flavors varied in different places in the bowl (tart vinegar, sesame oil, kimchi, and meaty broth), and managed to stay distinct through most of the my meal. The “mix cauliflower” was very refreshing. The dish does not contain cauliflower, but strips of potato (crisp like radishes), chunks of cucumber, 1 inch lengths of bean curd stick (tofu bamboo), and peanuts in a spicy vinegar sauce. The chicken ribcage version of the “chicken rack” I had in LA was a sodium and umami bomb, intense with cumin and taut from crisped up fat— a delicious bar snack that left me with an insatiable thirst for hours. Unlike that, presumably traditional version, the server at BBQ King told me that their chicken bone dish is a wok-based adaptation of a dish that is typically deep-fried. What their preparation lost in skin and crispness, it gained in meat content. They use bones from all over the chicken, and the small bits of dark meat, sinew, and crevices soaked up the sauce and had good gnawing value. The sauce had a faint cumin aroma, and was flavored more by chile powder and black vinegar. There’s a little sugar in the sauce, and I stayed clear of pieces of white meat, which were dry.

The awning says Smiling BBQ, but that closed in 2013. 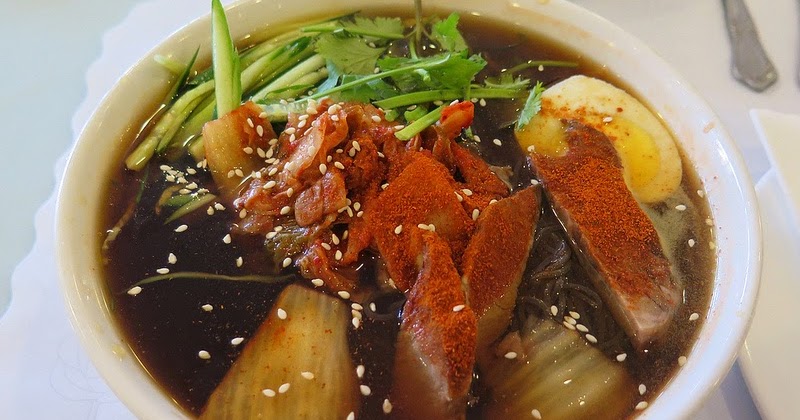 Made In China Restaurant is one of the new kids in town, having planted its flag in the fertile soil of the 19th and Taraval vicinity jus...

Actually, I’m wondering if there is any connection between the two, since Made in China was originally located in San Bruno. Could be a spinoff.

FWIW, I think that is the same address as the late lamented Sunny Shanghai.

Hmmm…i don’t think the noodles were buckwheat-- they seemed too lightly colored and not grainy enough in flavor. I could be wrong— the server simply said they were “Korean”. The soup was cold, but not icy.

Oh! The color difference between my and your soups got me wondering about vinegar. BBQ King says elsewhere on the menu that they use 陈醋 “mature vinegar”, which is dark and made from sorghum. That’s different from Zhenjiang vinegar, the rice-based black vinegar used in Shanighainese cuisine, the dip for xiao long bao. I’ll have to pick some up-- I use Zhenjiang vinegar at home, and have been wondering why some simple dishes don’t taste the same as at restaurants.

As I hemmed and hawed about what to order, the server, who throughout my meal would stop by my table with a tip translated on her phone, convinced me to get the candied sweet potatoes. They come as a plate of browned sweet potato chunks coated in molten sugar. The technique for getting them from plate to mouth is fun, up there with xiao long bao or fondue. You use your chopsticks to yank a chunk from the molten mass, ooh and aah at the floating sugar threads, dip it in a water bowl to crystallize the sugar, then put it on a tray to finish cooling. The server demonstrated the technique and then handed me the chopsticks— I was by myself, so had to work fast before the sugar seized up— it was the culinary version of the movie Speed, only without the bad actor taste.

I’ve never had a vegetable dish before that was flavored like cotton candy-- very tasty. Fun for the whole family, but watch out for severe burn injuries.

The BBQ A-vegetable (A choy) : I’ve liked versions of this preparation when charring brought out romaine-like flavors, and the leaves got crisp. I wasn’t a fan of their version, which was saucy and had limp leaves. Lots of cumin seeds. But greens are greens, and for $1.50, I’ll get it again.

Shrimp and vegetable dumplings : chive, egg, and shrimp filling was pretty good. Dumpling shape was odd, with a fin so big the dough didn’t cook all the way through. 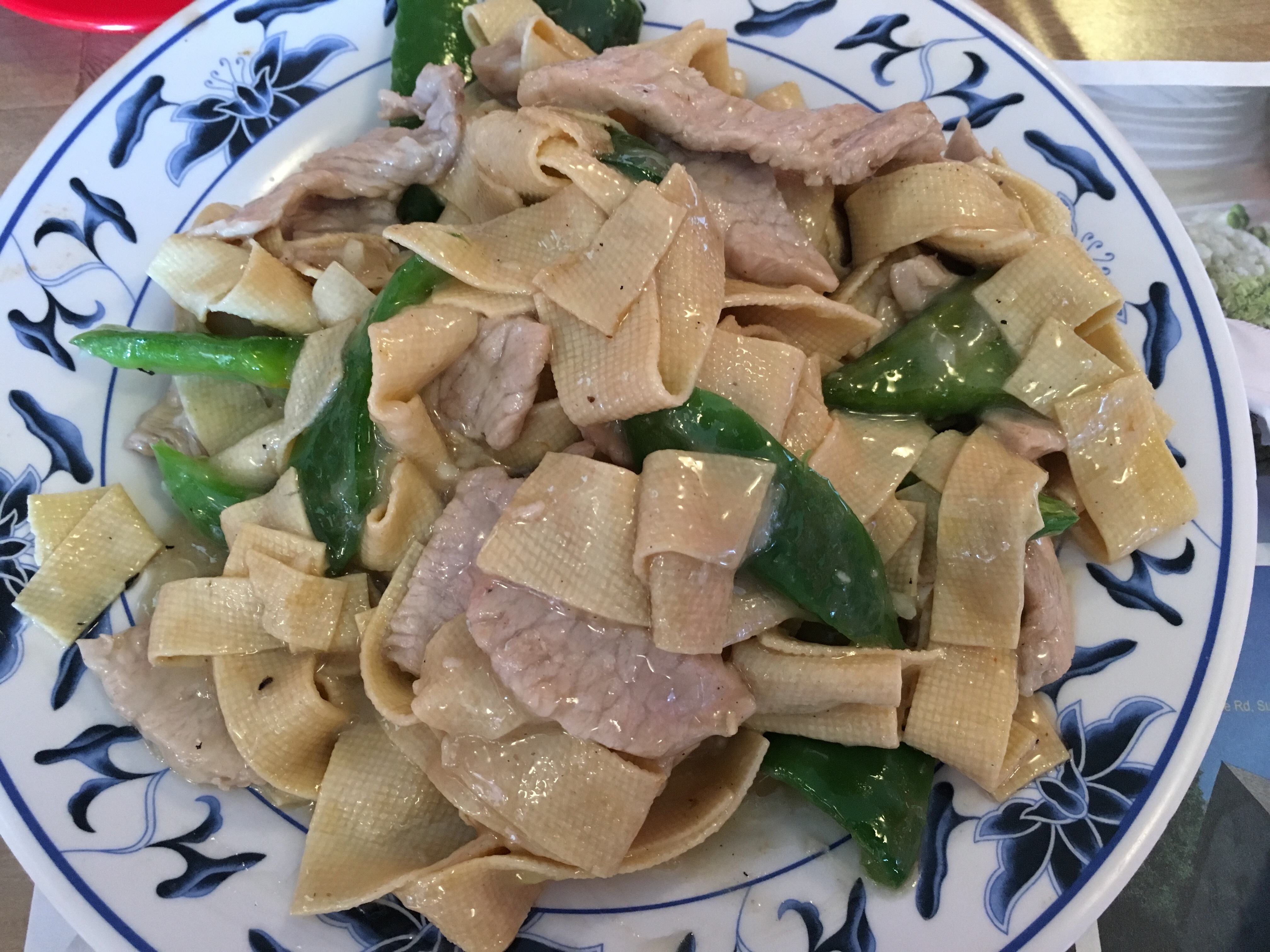 Tofu skin and peppers (and pork) : Green chilies added some heat, but this was a mellow dish that paired well with the aggressive cumin/chile seasonings in the BBQ items. The sauce tasted brothy.

Actually, I’m wondering if there is any connection between the two, since Made in China was originally located in San Bruno. Could be a spinoff.

Smart observation! The chefs (or maybe owners) of BBQ King and Made in China are brothers, but there’s no business connection.

I got the Harbin sausage tonight, which is housemade. It tastes like a mild Russian or Polish sausage, moist, smoky but not as smoky (or dry) as kabanosy. I’m glad I went shopping this weekend—tomorrow’s lunch is this on whole grain bread with a side of kosher pickles. 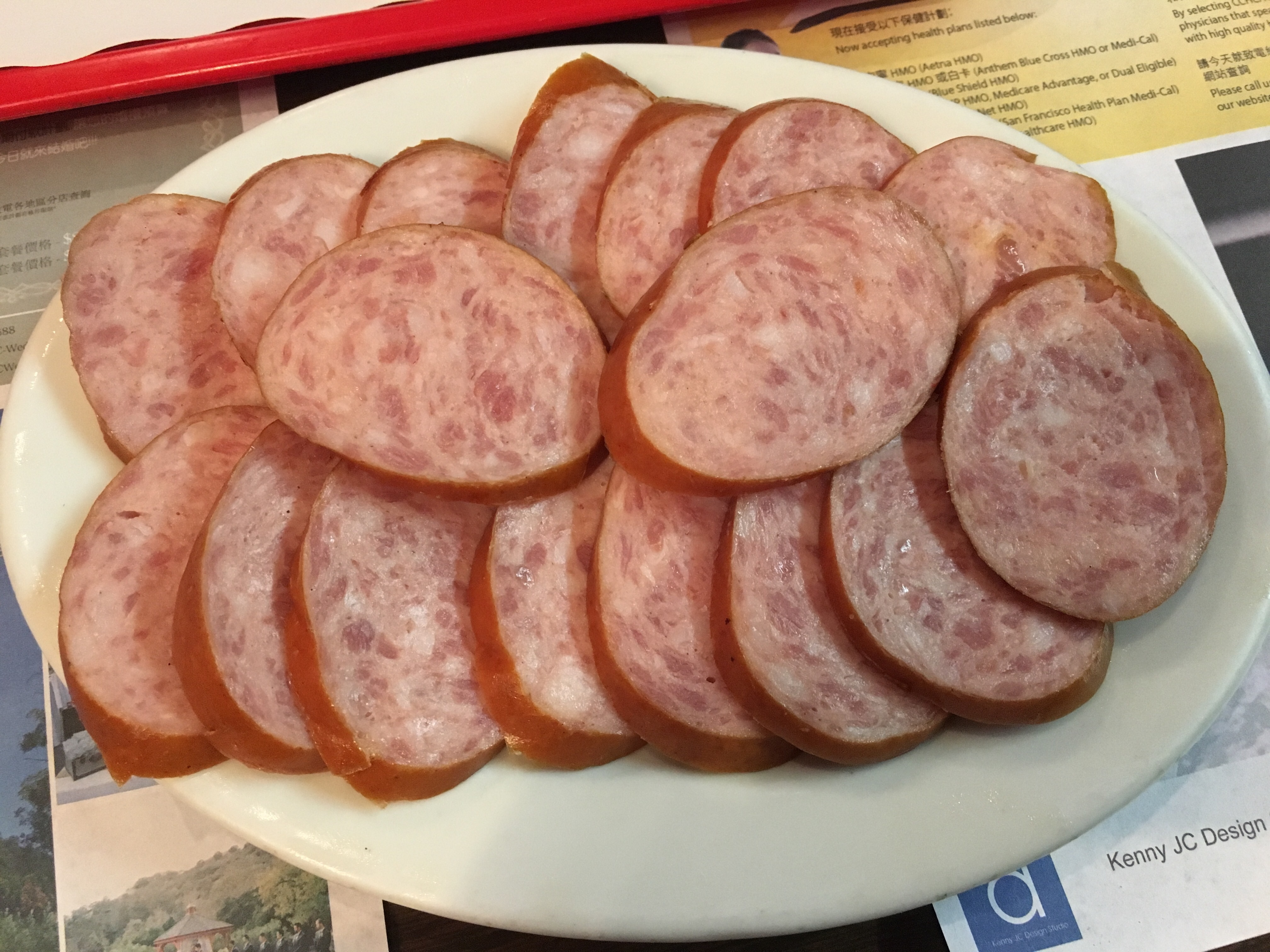