Z&Y has changed the menu a lot over the past two years. The menu is tighter, with less distraction from non-Sichuan items. First, here’s what’s new: 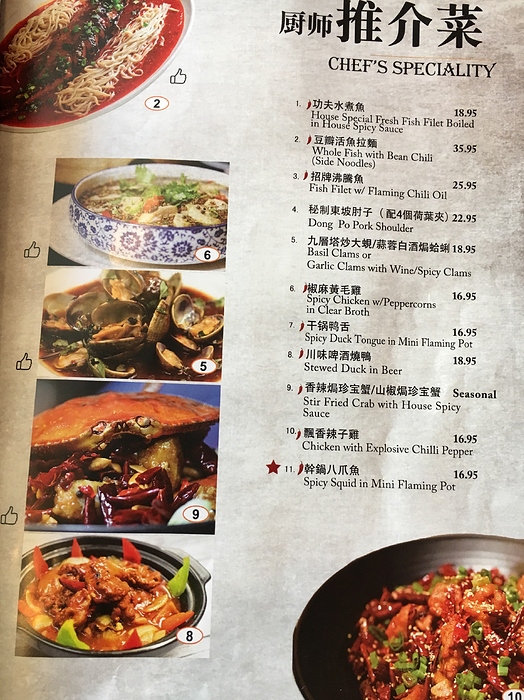 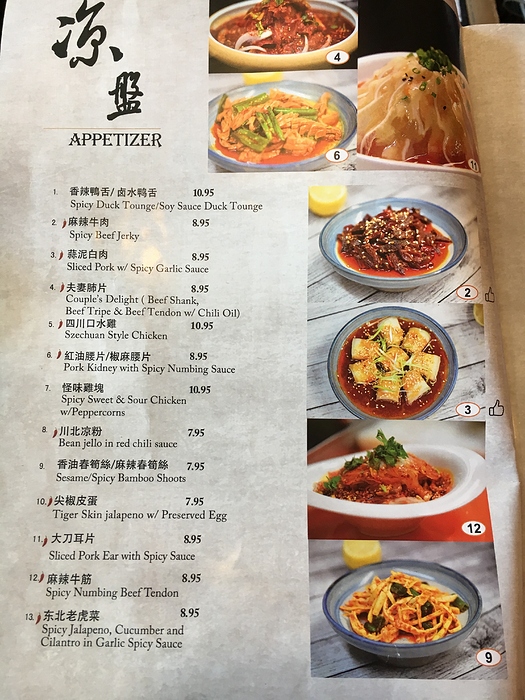 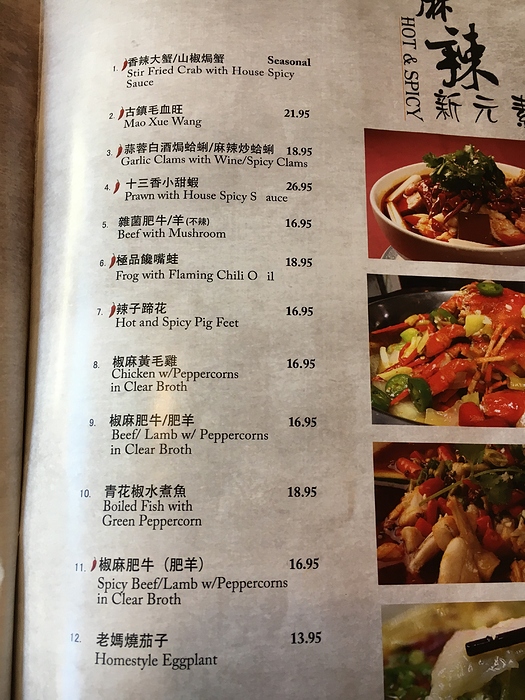 On website as “New Dishes”, but not the menu

They got rid of: 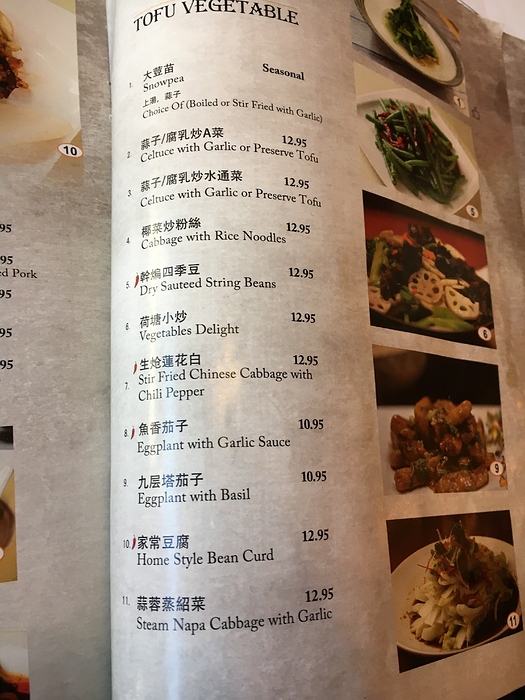 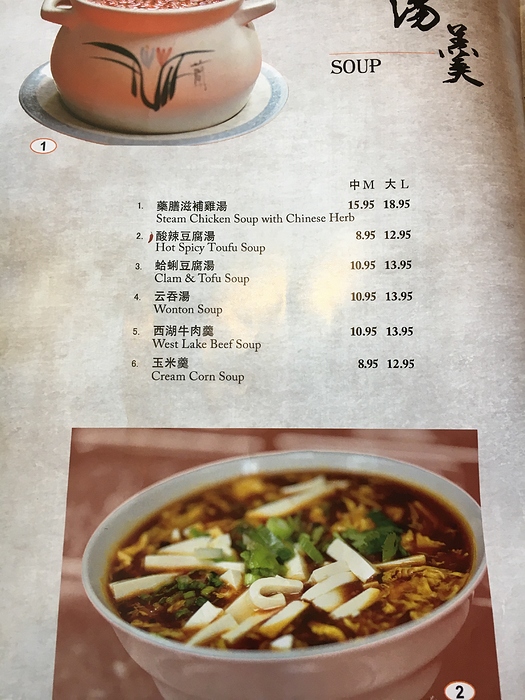 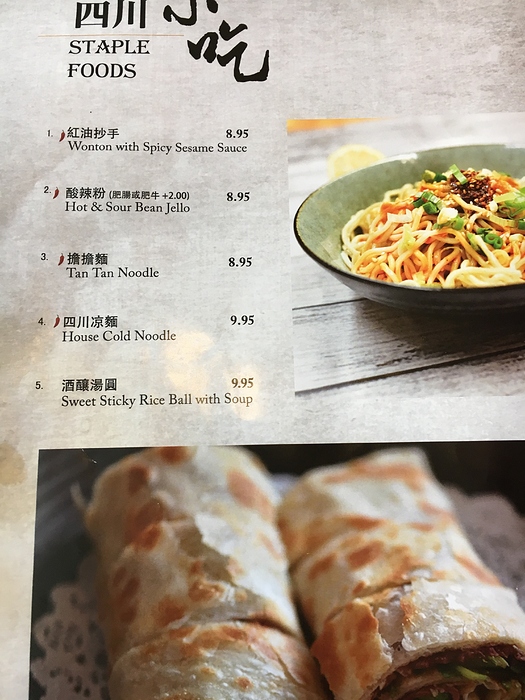 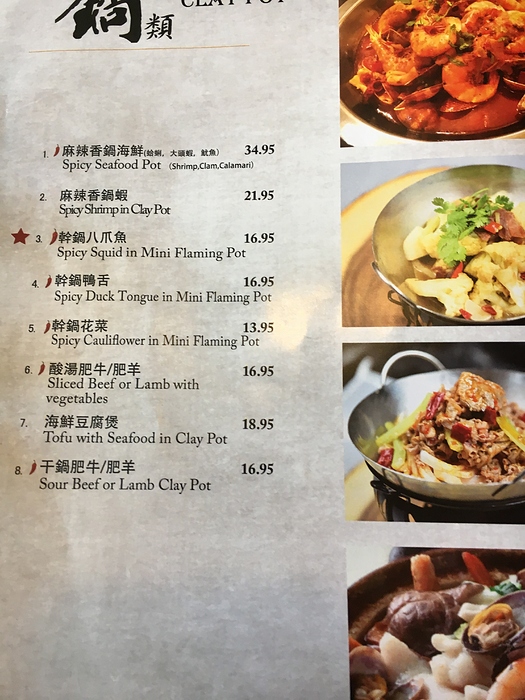 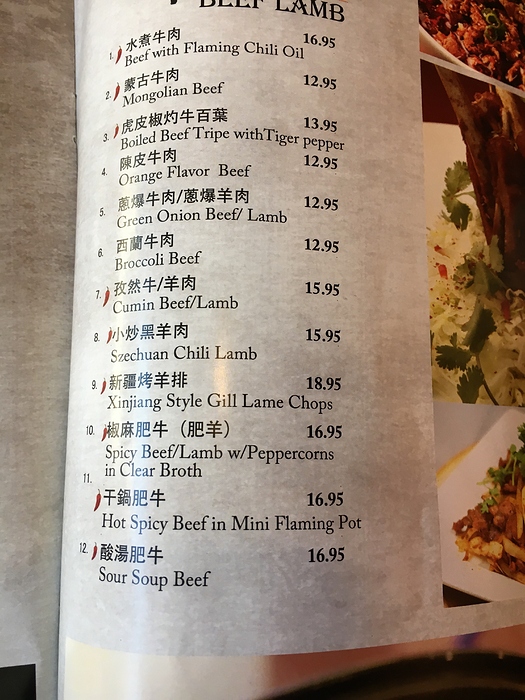 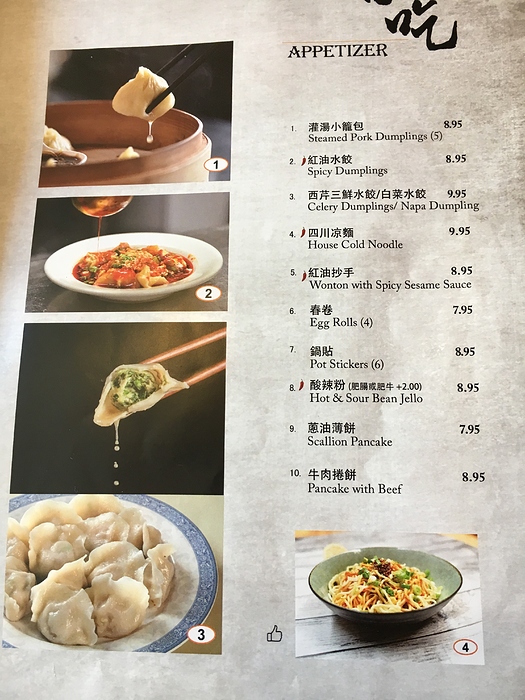 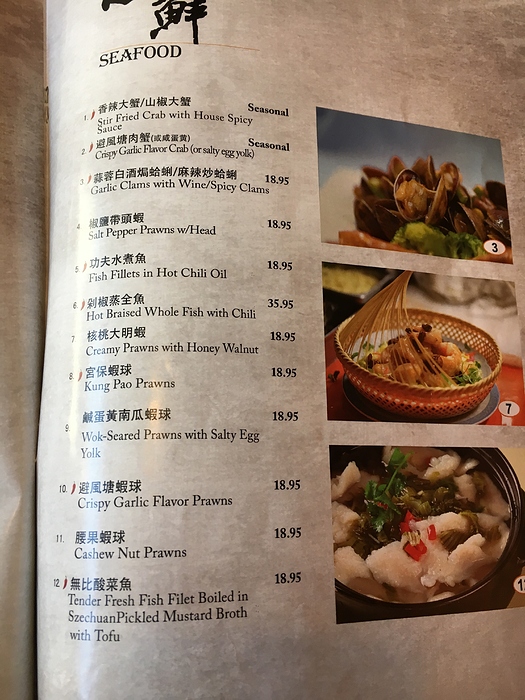 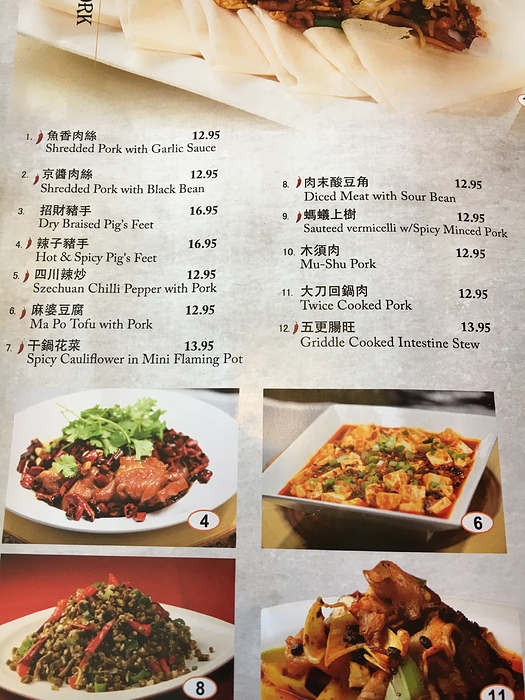 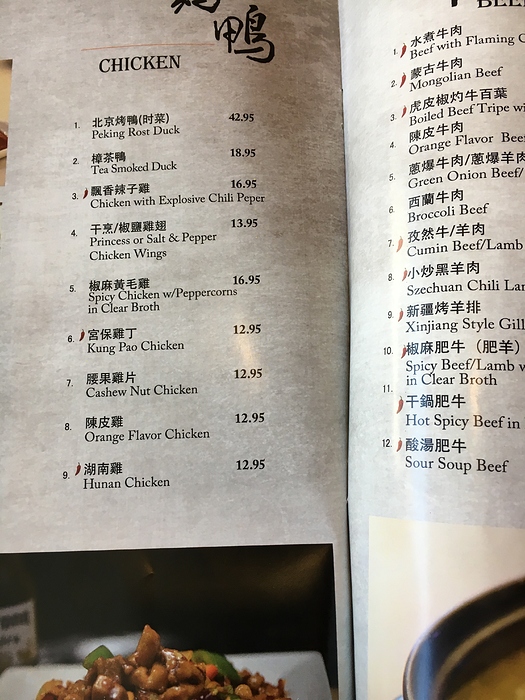 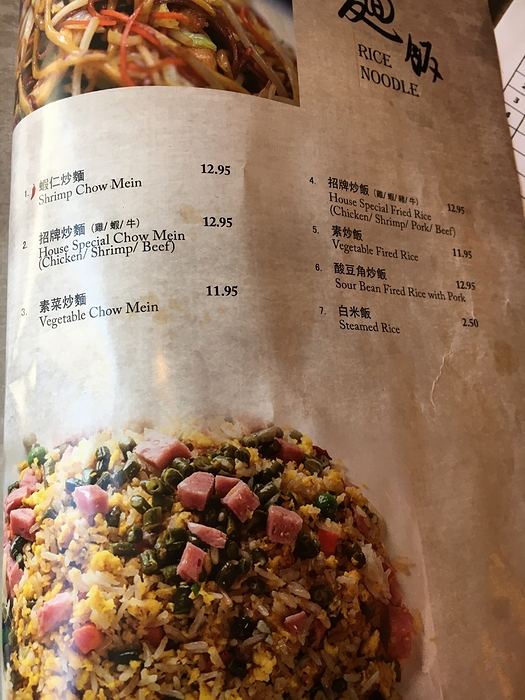 Did you go recently? How’s the food?

We tried to walk in a few months back during CNY but there was a long wait so we ate something else.

We ate at Z&Y a few weeks ago. We ordered dishes we had tried in the past and overall we felt they were not as good as past versions. Here is what we ate:

Beef roll- I believe on the menu it’s called “pancake with beef”. I thought this was not as good as versions we have had in the past and I am not sure why. It seemed drier and not as flavorful.

House special fish filet from the Signature dishes. This was fish in a spicy numbing broth with spicy oil on top. Not as good as previous versions we have had. The broth was watery. Except for spicy and numbing it lacked other supporting flavors (garlic, ginger etc.) to round out the flavor profile and it tasted very one dimensional compared to previous versions I have had here and similar dishes at other restaurants.

Pork with sour bean. This has always been one of my favorite dishes but as with the other things we ordered was not as good as previous visits. The sour spicy bite seemed muted. Overall a disappointing version of a dish I usually love.

Funny thing. I are there last Friday and stopped in on Thursday to photograph the menu. The two menus were slightly different, the Friday one seeming like the beta of the one I photographed above.

Good meal all around. $42/person, including the eight dishes pictured below, four beers, a beef roll and string beans. A few of us noted that nothing was particularly heat spicy, so we confirm @geo12the’s comments. I was curious whether to lack of heat that was based on the palette of dishes chosen (e.g., nothing with fermented fave bean paste, doubanjiang) or the kitchen’s default. Even though flavors were balanced and enjoyable, I regret not sampling of dish or two before putting in the full order, and then requesting the heat to be adjusted accordingly.

They have crab right now, but the crawfish dishes they advertise in their windows are unavailable. 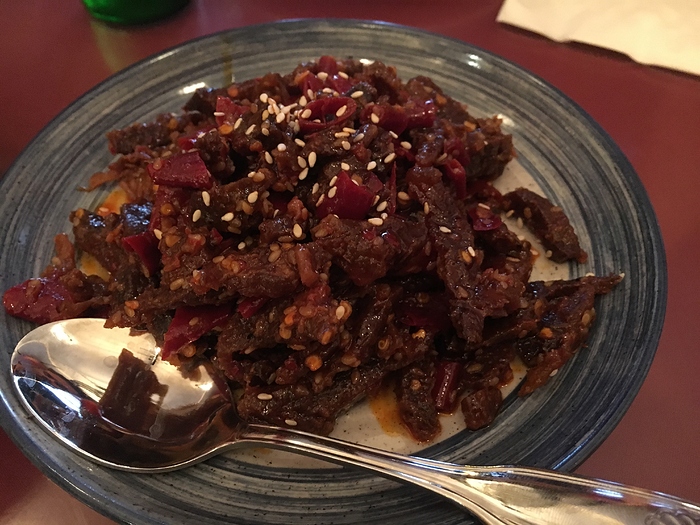 Spicy Beef Jerky. I’ve read about this in Fuchsia Dunlop’s Land of Plenty, but never had this dish in a restaurant. She describes the preparation as involving boiling with spices (star anise, cassia), marinating, deep frying, and then cooking simmering in a spicy, sweet, and aromatic liquid. Z&Y’s version is delicious, and another beast altogether from the processed items you get in a supermarket. Lots of seasonings to ponder, rough exterior and softer insides, a bit sweet. 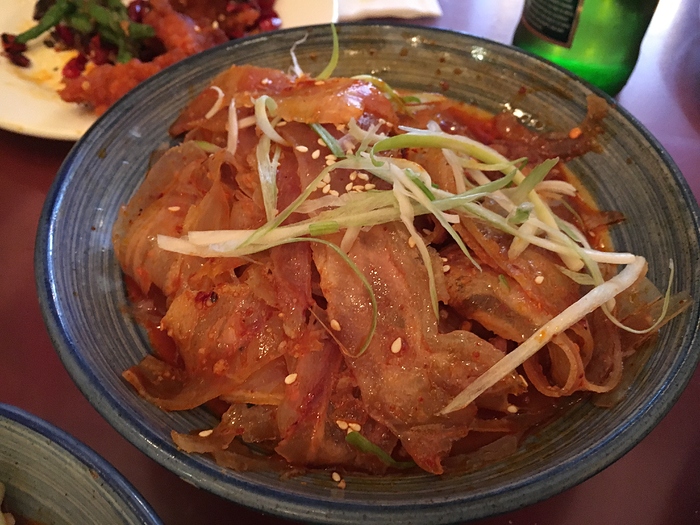 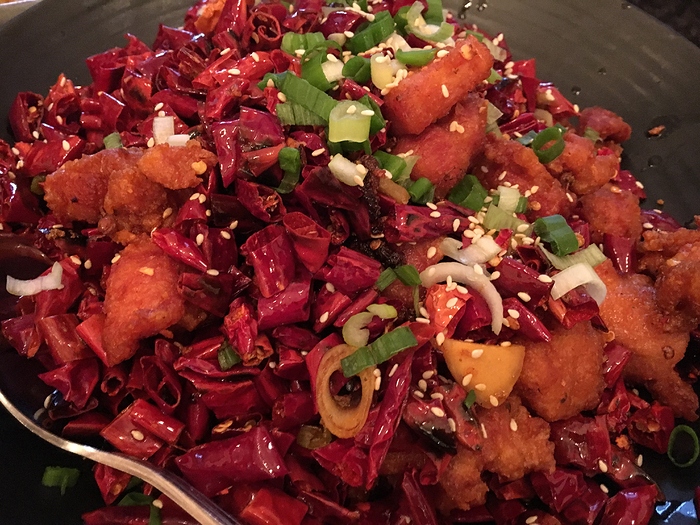 The chef didn’t light the fuse on the Chicken with explosive Chile pepper. Succulent, not-oily and very tasty boneless deep fried chicken, but a disappointment for one of their most popular dishes. Note the color of the chilies— bright red, none of the char necessary to impart the chicken with chili flavor. I didn’t get much numbing. 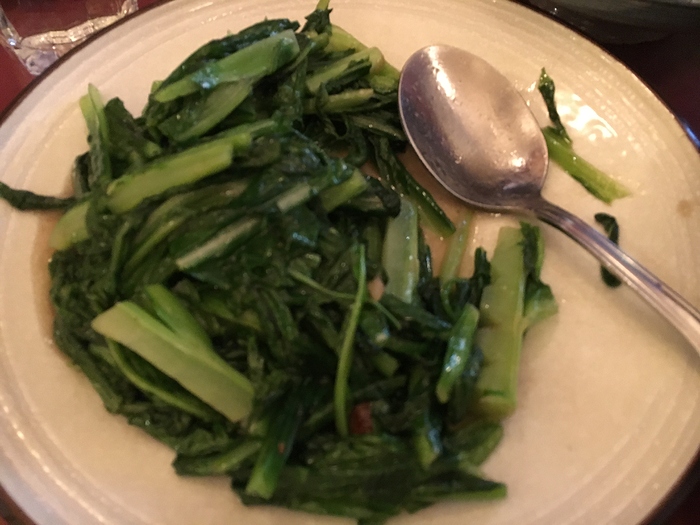 A choy (off menu seasonal green) with garlic sauce. 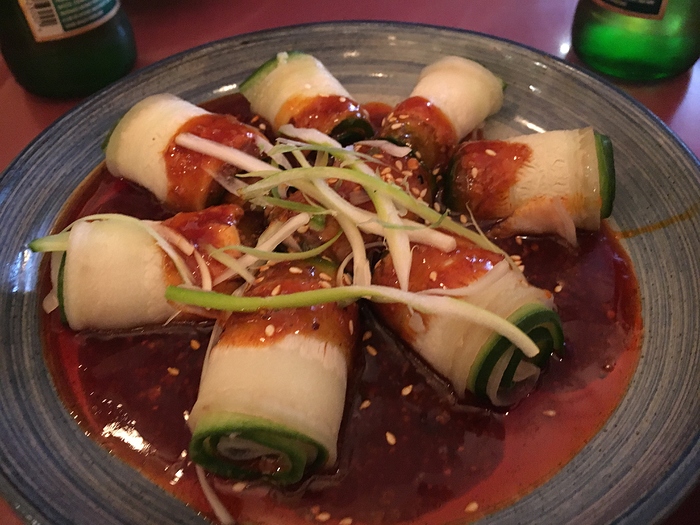 In Royal Feast’s version, pork belly slices are rolled up and the cool fatty pork contrasts with the aromatic “garlic mud” sauce. Cucumber is on the plate as a garnish. Z&Y’s version puts the cucumber garnish front and center, draping the pork on cucumber slices, and it weakens the dish. The pork was barely noticeable against the watery crunch, and the sauce was difficult to dip into given the lack of cucumber’s pliability. 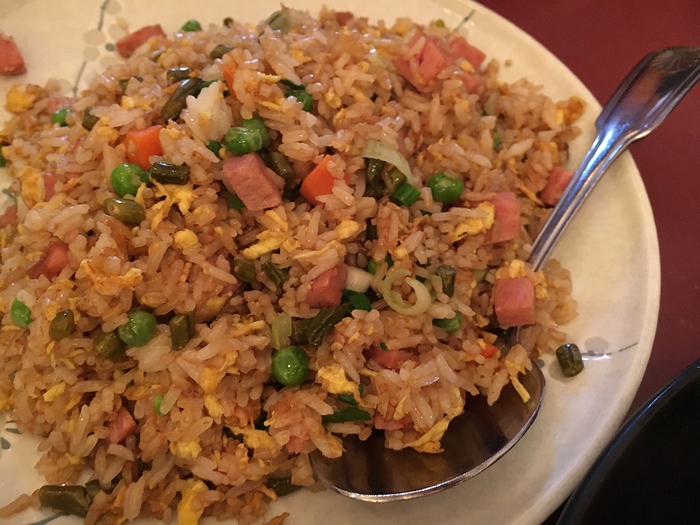 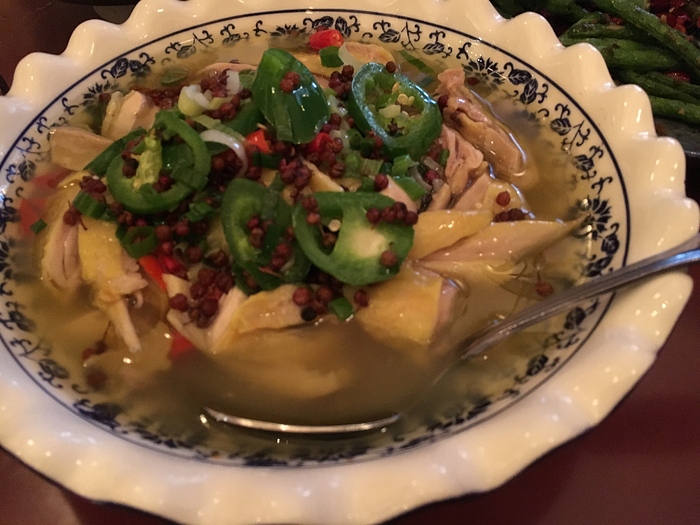 Spicy (yellow feather) chicken w/ peppercorns in clear broth. Wow! Minimal heat or numbing in the chicken, but oh man if that’s not the juiciest chicken ever. The server said not to drink the ‘clear broth’ ( I asked) and its viscosity suggested some kind of oil poaching liquid. I took a sip and it tasted faintly of Sichuan peppercorns. 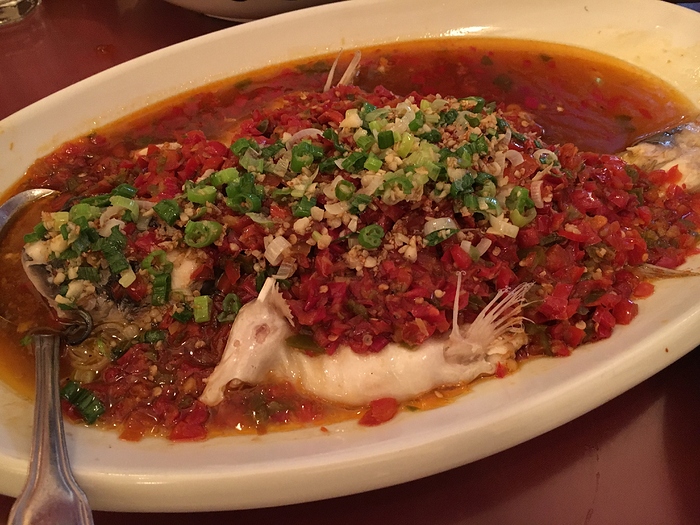 Hot braised whole fish with Chile (duo Jiao). Catfish, firm yet creamy texture in my first bites, lovely cheeks and head to finish, covered in red and green pickled chilies. In general, do Sichuan and Hunan versions of this dish’s toppings differ? Z&Y’s was more fermenty, Wonderful’s version is sweeter and zestier.

I looked back at photos and stand corrected about Royal Feast’s version of pork with garlic sauce. Chef Liu of Royal Feast does have cucumbers inside the pork, but there’s more pork than cucumber. Note also in the picture below of RF’s version all the minced garlic, for which the dish is named, and which is largely absent in Z&Y’s version. 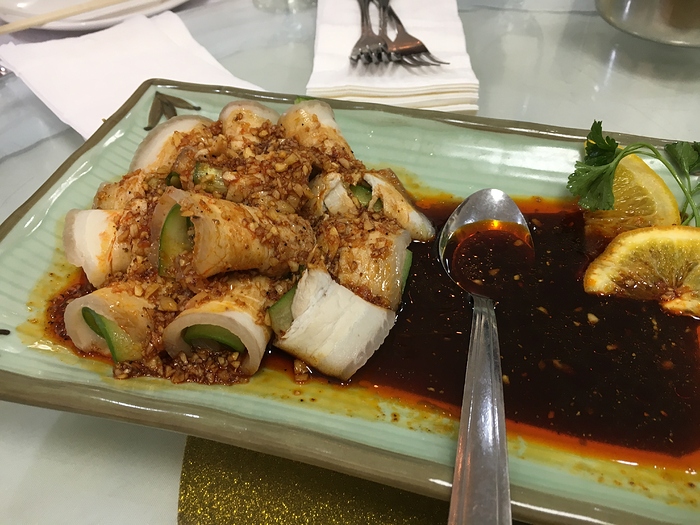 Chef Liu at Royal Feast also gets more spicing into his in-bone Chongqing style chicken, but not so much to distract from the chicken’s flavor. Z&Y’s has more chili’s and is more Instagramworthy, but their flavors don’t add much. 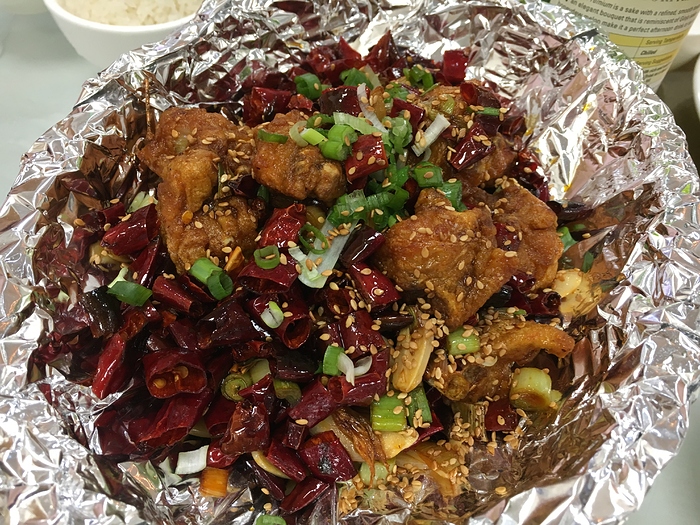 No pics because I had to scarf it down while trying to meet a deadline, but I had Ma Po Tofu takeout for lunch yesterday and can report that it was righteously spicy with a generous dose of numbing Szechaun peppercorns. I see the menu lists it as having pork but I didn’t discern any in the dish.