Dumpling City replaced the VAM Asian Fusion Restaurant in Palo Alto in a space that has been a revolving door for eateries. There is no foot traffic along that stretch on El Camino, and signage is easy to miss for that building, and the space is small for any eatery. Dumpling City is the latest entry in that space, and if they got a good deal on the rent, they may actually make it.

The space is small, with a few small tables in the middle of the room. The dumpling making operation is curiously in a west- and El Camino- facing window near the door (Isn’t it kind of hot in the summer?)

There is talk that Dumpling City is affiliated with Dumpling Depot in Sunnyvale, which in turn may be affiliated with Kingdom of Dumpling, etc. in San Francisco. I have not had the chance to ask about the relationship. But evaluated on its own, Dumpling City certainly makes some dumpling that easily stands out in a stretch south of Redwood City and north of Sunnyvale that doesn’t have strong entrants in the dumpling area.

They run out of stuff all the time. Its a must to call ahead and ‘reserve’ your freshly made and unfrozen, or freshly made and frozen dumpling. My wife called mid-day to order uncooked dumplings to go, and they are almost out of everything (where did they all go then? A pilgrimage to the Kingdom of Dumpling in the North?) She managed to negotiate a couple of trays of dumplings, just made, room temperature- chives and pork, and bok choy and pork. The dumpling skins are not very thick. The dumplings are sized a little smaller than some large renditions I’ve seen. The fillings are fresh, clean-tasting, and seasoned just right. More delicate and better than I Dumpling in Redwood City, which in turn is better than Panda Dumpling in the water boiled dumpling department. 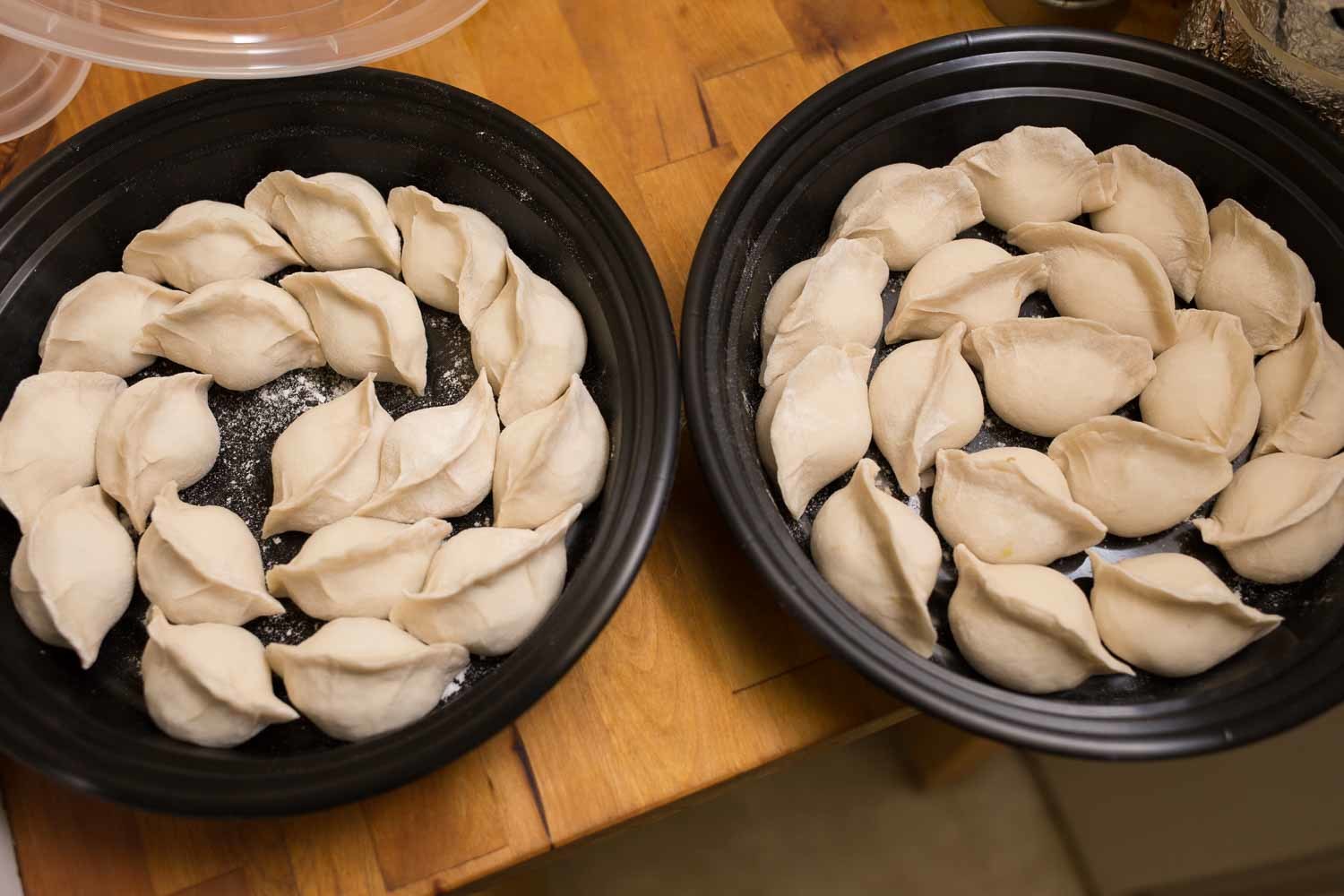 One of the reasons we got the dumplings to go was because dining in is on paper plates and plastic utensils. So we see no reason to haul the family there, wait for a table and eat the same thing that we could easily boil ourselves at home (6 minutes for unfrozen ones, btw), and for cheaper. I didn’t ask the price, and I only stopped for 1 minute. But I think unfrozen ones are 18 dumplings for about $8. There are other appetizers available.

Handwritten eatery sign on a piece of paper out front.

Wanted to get some dumpling but hours changed to Tue-thur over the weekend, and today it became Tue-Sun. Best to call ahead to confirm they are open.

What makes you say that? The XLB have that same weird triangular shape.

Ah, the owners appear to be different, but Dumpling City and KOD have a registered agent at the same address on Wawona in SF. 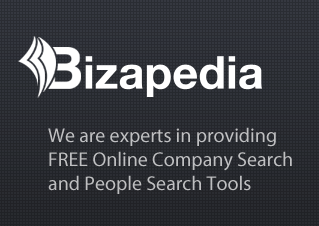 Discover Company Info on Kingdom Of Dumpling LLC in San Francisco, CA, such as Contacts, Addresses, Reviews, and Registered Agent.

What makes you say that? The XLB have that same weird triangular shape.

Just hearsay. But you confirmed the same ownership. Put Dumpling Depot in Sunnyvale in the same camp also.

How do you feel about the dumplings at Bamboo Garden on Rengsdorf ( very north mountain view )? My chinese friends like them very much, I think they’re pretty good. Or the XLB at Chef Zhao, which are not boiled I know.

Better than iDumpling certainly rates a stop, I’ll put it on the list.

I don’t get to go to Bamboo Garden these days. My wife vetoes it on the rare occasions I bring it up, so I don’t even bring it up any more. And its in the same general hood as Kumino, which I thought was the most competitive in its price range around there.

Its worth making the distinction between the steamed dumpling (e.g. XLB) from the Shanghai/ Jiangnan area versus the boiled dumpling from Dongbei. Panda makes a nice XLB, but less strong on dumplings. iDumpling is the other way round I think. I am not sure if Dumpling City has XLB. But if they do, its probably going to be similar to Kingdom of Dumpling’s in SF.

A post was split to a new topic: [Sunnyvale, CA] Dumpling Depot

@bbulkow I think the dumplings at Dumpling Depot were one of the best dumplings I’ve had in years, better than Bamboo Garden and Chef Zhao. Definitely worth trying!

Called to ‘reserve’ some fresh dumplings in the morning. They said they had nothing made so far and asked us to show up later, e.g. 12pm. Showed up at 12pm and they hadn’t started making the dumplings. So I waited while they made them on the spot. They got plenty of frozen available in the freezer. Freshly made and frozen are the same price. Freshly made has 18 in each tray while frozen has 20.

Freshly made tasted noticeably better- the skin was more ‘al dente’ versus frozen was more mushy. So if you care about the last 10% of the quality, call in early to reserve the freshly made. Be prepared for them to tell you they don’t have anything and don’t want to sell you freshly made, but be insistent, ready to talk them into changing their mind, and possibly waiting for them to finish the job. Mid-afternoons are possibly better for snatching those freshly made dumplings.

The owner is from He Bei province. So is one of the workers. English is spoken. 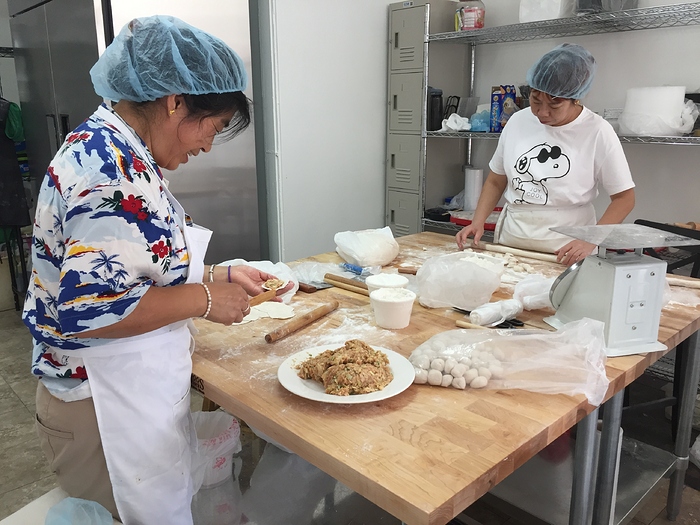 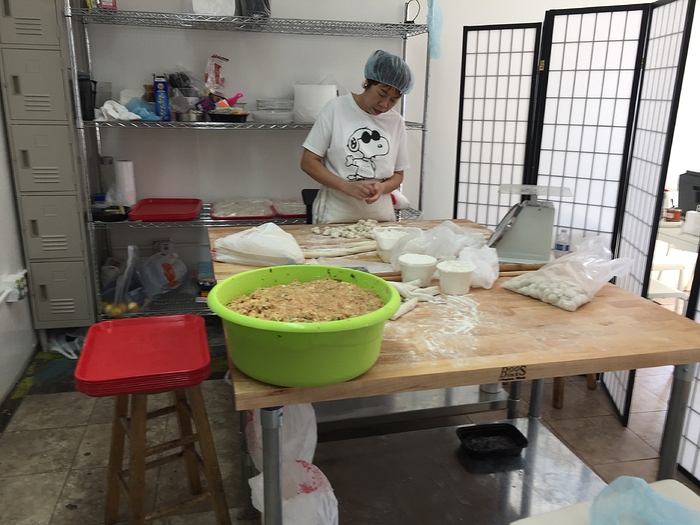 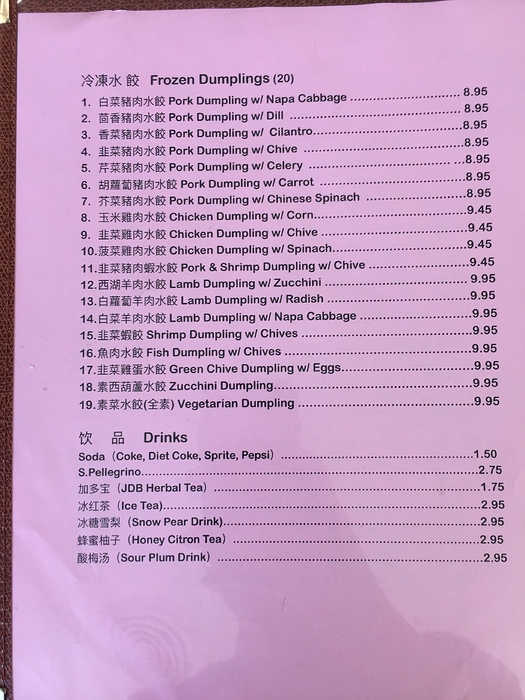 Don’t know how relevant these are for the time being: 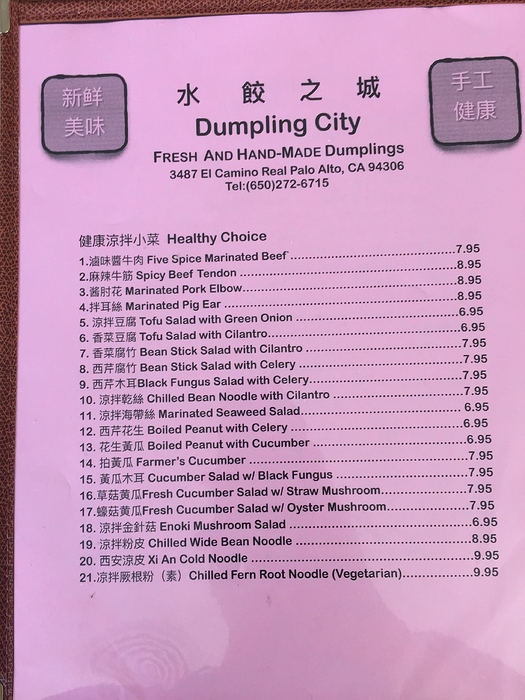 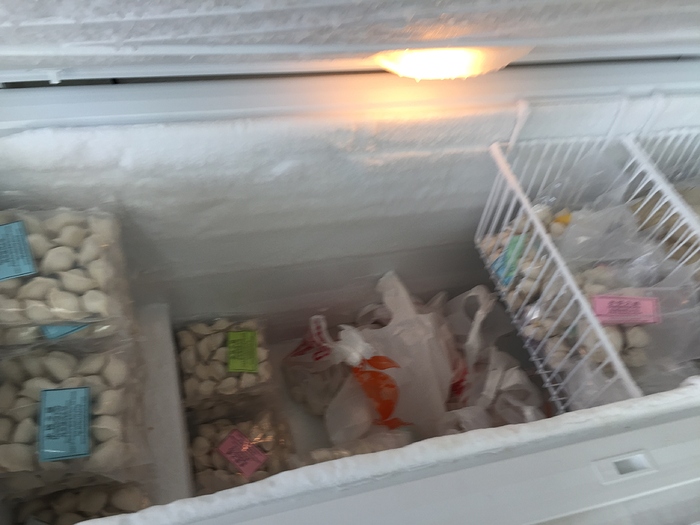 Blink and you will miss the shop from El Camino. I pass by it almost every day and even I have a hard time in spotting it from the street. 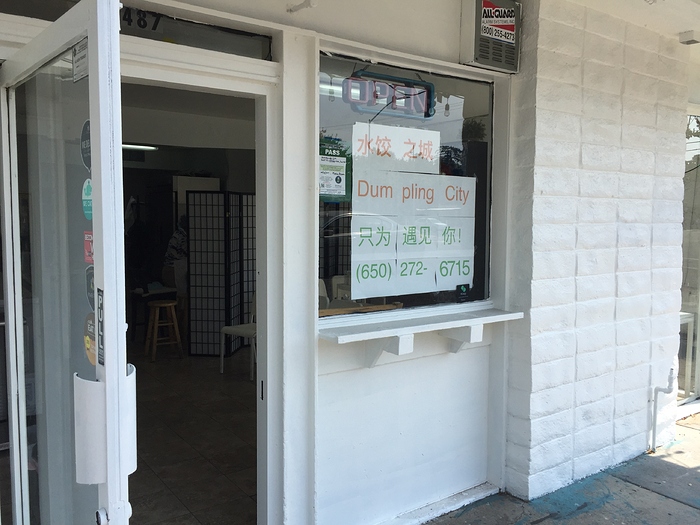 Dumpling City is now only selling frozen and freshly made uncooked dumplings.

That was our experience too. We bought some frozen which were good, but it did turn out a little mushy. I wonder if thawing them would be better. I will have to try the freshly made ones!! Thanks for the tip @sck!

I wonder if its because boiling frozen ones longer in the water cause the skin to be cooked for longer than it should, making it mushy.

That’s a good guess. I think it’s possible. Will be interesting to experiment fresh, frozen,and thawed to compare. I know my husband and I wouldn’t mind taste testing.

I should also add that the worker said that half of the dumplings made at Dumpling City get shipped to Dumpling Depot.

[Mod note: split from Dumpling City discussion] Husband and I visited both Dumpling City and Dumpling Depot, because Dumpling City only had frozen dumplings for sale, so they referred us to their sister location Dumpling Depot. When we arrived at Dumpling Depot (which used to be a Chinese vegetarian joint decades ago) at 7pm, we were starving! Unfortunately, we had to wait outside with a half dozen other people who were also clamoring for some dumplings. The restaurant was a pretty standard C…

The word from the employees is that they did some renovation of the space and didn’t pass the city’s requirement. So they stopped selling cooked food. No idea if they will resume doing so in the future.

On the other hand, lamb dumpling with zucchini was very gamey, and required a large dose of vinegar to cover it up, for me. Preferred the other dumplings.

Is it better to steam and eat, or are these intended to be boiled and eaten?

Here’s an article that discusses the textural difference and how to do it. I don’t have steamers so I never tried steaming at home. 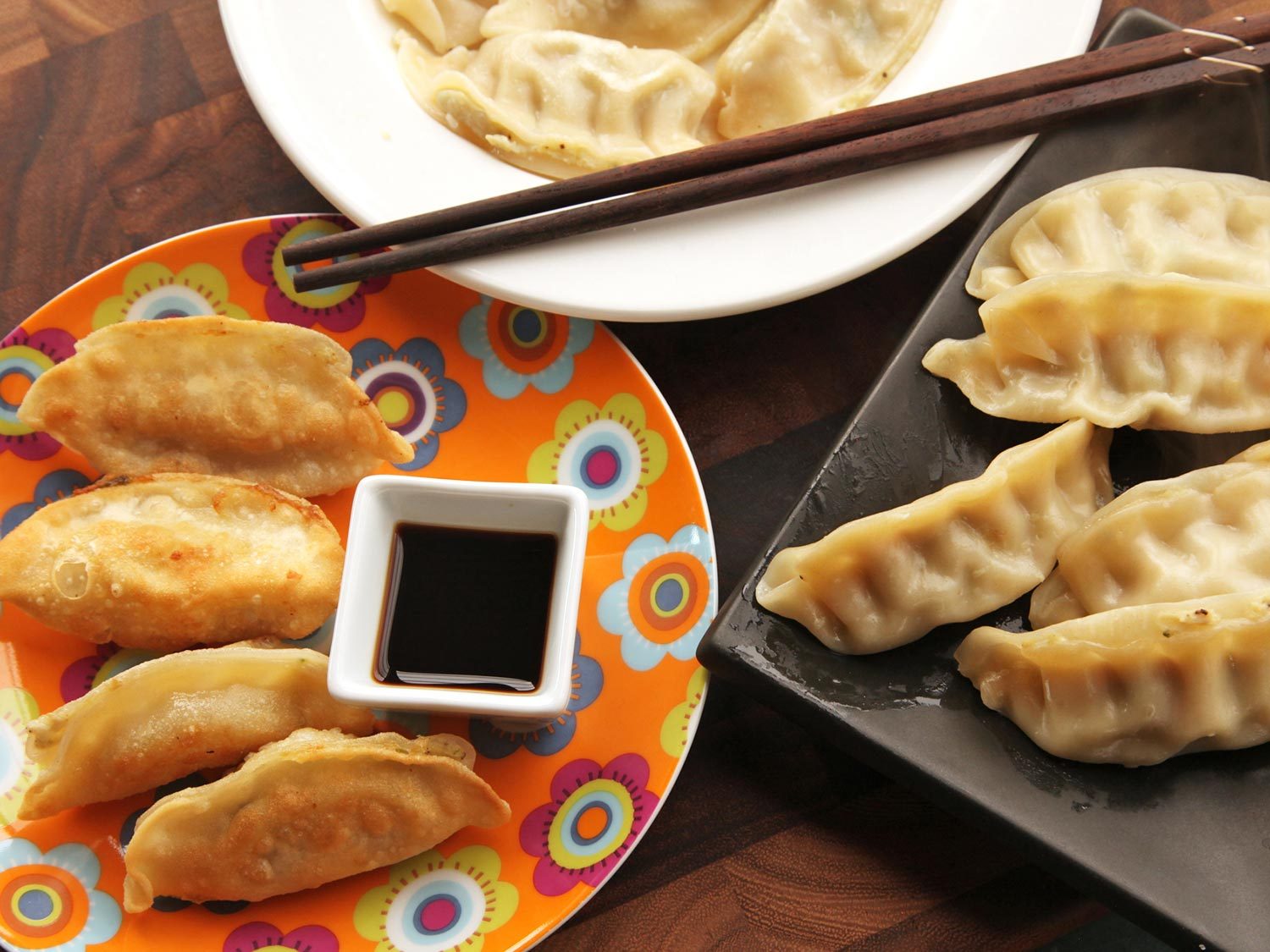 How to Cook Frozen Dumplings

My wife Adri and I have stocked out freezer with frozen dumplings since before we were husband and wife. After years of experience, I've figured out the easiest, fastest, and best ways to cook them from frozen. Here's how.

I didn’t know you could microwave dumplings!

I must try today… I conveniently have a bag of frozen dumplings from I Dumpling… mmmmmm dumplings for dinner tonight!

I have been buying my frozen from 99Ranch and using the directions on the bag. They tended toward the “classic pan fry” with some variations. Great to know my options ( and now have an even better frozen source )

Okay, just tried the microwave method in the article. It totally works! Just make sure to use a non-stick pan… I forgot to and it was sticking like crazy, but other than that, the dumplings turned out well. I can’t believe how fast it is!

I have been buying my frozen from 99Ranch

Hi Brian! Which ones do you get? Can you share a picture? I’m so curious! Thanks!