Its the week of Yunnan for me. And this day its eating at the newly opened 575 Yunnan Eatery.

I forgot how expensive their cross the bridge noodle was until I showed up at the restaurant. At $20 (chicken), they simply have to deliver. They also have a wagyu version at $26 and a lobster tail version at $35. I call that the Bay Area hipsterized versions since Yunnan is not the land of wagyu and lobsters.

You can see all the components of the noodle below. The chicken is a Cantonese empress chicken, skin on. For the rest, clockwise from top left- peanuts and cashews, green scallions, bean sprouts, cooked egg slices, quail egg, chives, tomatoes and wood ears. Tomatoes are foreign to this noodle dish. They all go into a gigantic bowl with a broth that is made from chicken, duck and pork bones.

The range chicken is of great quality, and the milky broth is tasty, but not hot enough. After adding in all the cold ingredients, the broth is merely lukewarm. The whole bowl is incoherent- the total is somehow less than the sum of its parts. Its a decent bowl of noodle soup, but it feels more like a bowl of noodle soup with ingredients cobbled together after rummaging through my fridge late at night. With the two Cantonese-speaking servers speaking Cantonese to a gentleman that looks like the chef, I wonder if that’s the reason why.

This bowl of noodle is the most expensive bowl/ plate of noodle I’ve ever eaten without abalone, lobster, etc. in it. Now suddenly the ramen at Ramen Shop in Oakland doesn’t look so expensive any more. 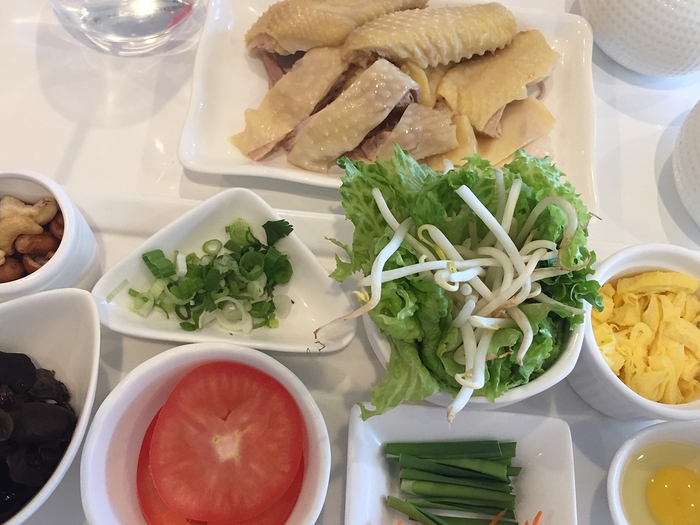 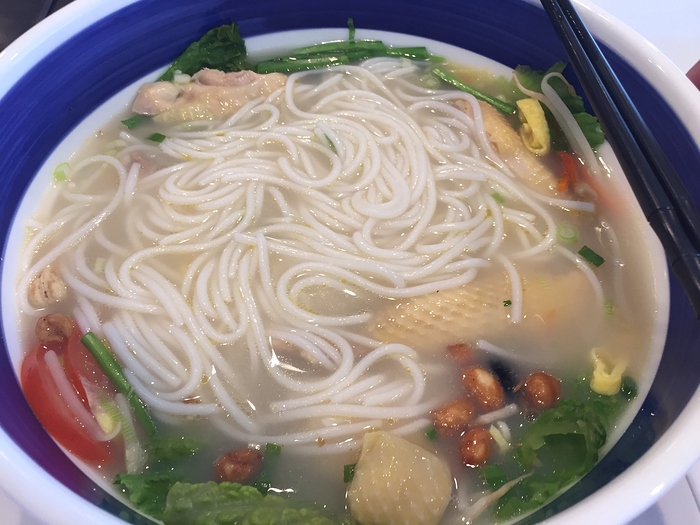 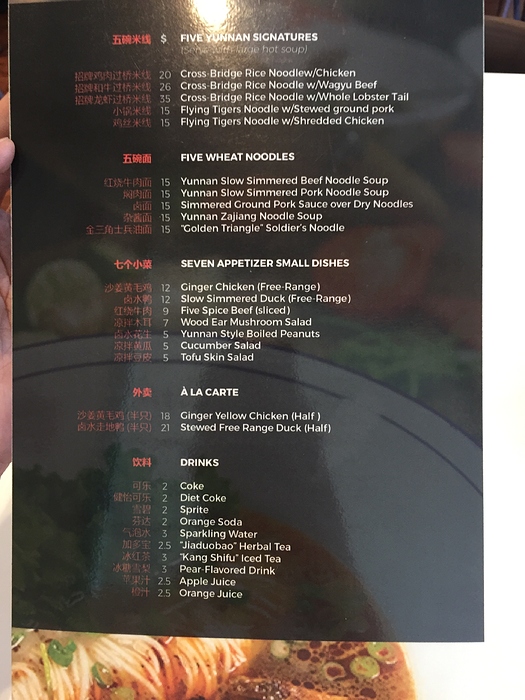 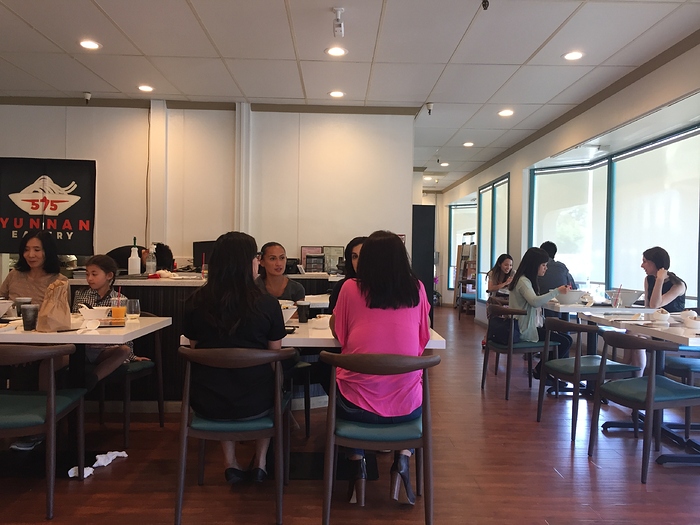 Discussions about the restaurant’s name here. The description of a better bowl of Yunnan noodle soup here.

Thanks for taking one for the team. Sucks that the “piping hot noodles” they describe on their webpage didn’t pan out. Do you think that had more to do with the dishware or the kitchen’s timing?

Did the tomato add anything to the dish? How were the accompaniments?

I’d speculate both. Its a gigantic bowl, so there’s a lot of ceramic to heat. They also precooked the noodle. I didn’t feel it before the serve dropped the noodle into the broth, but I suspected that was cold. The chicken was not thinly sliced either, and there’s a lot of accompaniments to heat. I didn’t try the broth before everything was dropped in, but there was not that cross-the-bridge layer of oil on top, AND there was no steaming from the broth when it arrived. So I’d guess the temperature was not ultra high to begin with. It cooked the quail eggs though, since I dropped it first into the bowl myself and let it cook for like a minute before everything else went in.

I’d say that the tomatoes didn’t add much. All the veggie condiments were raw. For the tomatoes to add anything to the dish, it’d have to be cooked into the broth, or harvested during the peak of the season all juicy, and with that it’d have to alter the character of the broth such that its not ‘cross-the-bridge noodle’ any more. That’s how I do my tomato-y broth when I try to doctor up a ‘broth’ without stock late at night.

To give you an idea the size of the bowl. From Yelp: 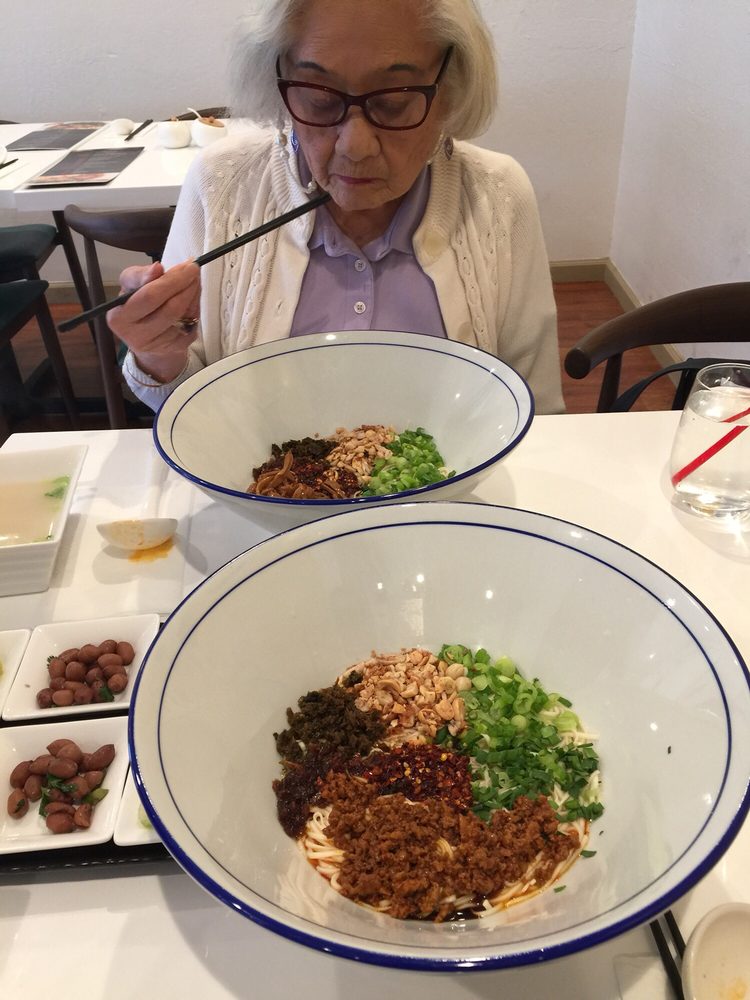 Its almost as wide as the woman’s shoulders!

That’s either a giant bowl, or Peter Jackson’s at it again with forced perspective.

Or did you mean because Cantonese speakers made the noodles, they’re not as likely to be “authentic”

Nothing wrong with speaking Cantonese.

Yes, that’s what I meant. According to a Yunnan acquaintance, the owner tried quite a bit to figure out how to do the cross-the-bridge noodle, but didn’t get it entirely right.