Has anyone tried the prix fixe yet, or sampled anything on the bar bites menu?

I became a fan of Brandon Jew’s cooking when he was at Bar Agricole, and I’d been eager to try Mister Jiu’s since it was announced. The restaurant aims to deliver a Cantonese style banquet menu using California ingredients and sensibilities.

I enjoyed a 3+ hour meal there last week with a group of five others. The restaurant menu has 5 sections, and your table chooses a dish from each section to share family style. There’s also a few add on dishes (better for larger groups), a cocktail menu, and desserts.

There’s an open kitchen, and acoustics were good enough that our party could hear each other at our rectangular table. My future visits will likely be at the bar, where’s there’s a separate menu, but there are round tables with lazy susans that I’d try to snag if I were going with a group again.

The concepts behind the dishes were strong and the ingredients were used with purpose. Fermentation was put to good use, and I understand ingredients like oyster sauce are made in house instead of imported. Execution was off for some dishes in terms of seasoning or heat control, but the ideas behind them came across and there were always good parts. They’ve only been open a month, so I would expect quality control to get better.

The meal began with an exploration of different types of crunch with salty, sour, sweet tastes. The complimentary snacks included : housemade shrimp chips (regular and mung-bean, which had a bumpy surface and were like rustic Munchos), pickled carrots and long-beans which was our first taste of their fermentation skills, and candied walnuts with puffed rice.

Salt-and-pepper dishes have a deep-fried item that’s seasoned with some combination of salt, ground black or white peppercorns, sliced fresh green chilies, and a generous dose of MSG. Mister Jiu’s gives the salt and pepper treatment to a trio of items (Monterey squid, frogs legs, and fennel) and shifts the heat spice and umami components to a chili pepper and soy dipping sauce. Each item was greaseless, and the rice powder shell kept crisp after being dipped in the sauce. The coating was light enough that I was still able to appreciate the quality of the items inside. My favorite of the items were little nests of fennel, cut into ribbons to look like squid tentacles. The fennel exuded freshness, and dipped in the soy sauce, seemed like a riff on dishes that pair five spice power with soy sauce. Frog legs were a good proxy for chicken wings, which would have been too heavy for a multi-course meal.

Serving this dish family style would’ve broken up the composition, so this was the one dish for which everyone received a bowl directly from the kitchen. The server placed a block of sizzling rice into each person’s bowl, and we enjoyed watching the steam come up. Thin slices of water chestnuts were suspended throughout the bowl, and it was a treat to crunch on them after they passed through the schmaltz floating at the top of the bowl. The last I checked, shrimp are a difficult item to source sustainably, so I’m curious how they get theirs. Either way, the shrimp in my bowl were small and lovely.

This was an add-on to the prix fixe menu. Despite the description “serves 2-3”, the fish was plenty for our group of six.

This was my favorite dish of the evening. The trout meat was juicy and sweet. Lotus leaves separated the salt from the fish, and imparted a light earthy flavor.

The other vegetable dishes sounded more exciting, but we felt a simple dish would help keep the meal light. The pleasant range of fresh greens included fiddlehead ferns and hollow stems of water spinach (ong choy), all crisp. We had the option of eating the greens by themselves, or enriching them with a paste at the center of the plate consisting of fermented tofu, roasted garlic, and Meyer lemon. The fermented tofu, not to be confused with stinky tofu, was complex and tangy. I like jarred varieties of fermented tofu, but, after eating Mister Jiu’s version, I feel as enlightened as when I had homemade gefilte fish for the first time.

Unlike the rendered chicken fat in Mission Chinese’s schmaltz fried rice, which comes across as oily without depth, the rendered beef fat in Mister Jiu’s fried rice makes the dish full on beefy. However, instead of wok hei, the ephemeral “breath of wok” chefs strive for, there was a burnt flavor in the background.

Lion’s head meatballs, so-called because greens draped against the meatballs approximate a lion’s mane, are typically baseball sized or larger. Lightly cooked greens offer a contrast to braised Lionshead meatballs. When the meatballs are cooked in a stock, so are the greens, which wilt and exchange flavors with the soup. Mister Jui’s approach the dish by pairing fermented mustard greens with small meatballs in a broth. The mustard greens are stunning— bright and acidic, and bold enough to balance a fatty meat. Their contribution to the dish promised to be an eye opener, but the meatballs didn’t meet the challenge— they were overcooked with no hint of fat, and white pepper dominated their flavor.

Tea-Smoked Liberty Farm Duck pancakes, peanut hoisin, chopped liver, 8-spiced duck breast & confit legs
This was another add on and we opted for the half rather than the full duck. Well executed. Some organs were left whole on the serving platter— wow. I’d recommend bogarting these while everyone’s distracted with assembling a pancake.

Thanks for the detailed report.

Salt-and-pepper dishes have a deep-fried item that’s seasoned with some combination of salt, ground black or white peppercorns, sliced fresh green chilies, and a generous dose of MSG.

I wonder if a California style meal like this has a place for MSG at all…Higher end Cantonese cooking usually have minimal MSG, and what little there is usually comes from premade sauce from elsewhere.

I’ve been thumbing through my copy of the Barbara Tropp’s China Moon cookbook, which records the recipes from her casual California Chinese restaurant founded in 1986. She promoted farmers market style California ingredients and aimed to “introduce Chinese home-style cooking to a city that adored good food.” She disavows MSG in her intro, and cooks some dishes which would be welcome today like cumin lamb fried rice, and have similarities to Mister Jiu’s offerings, like Chinese duck confit and tea smoked duck breast. 30 years later, it’s funny that before Mister Jiu opened, the most creative bridging of Chinese and contemporary American cuisine in SF, Mission Chinese, puts shakers of MSG on the tables.

I’m not a Mission Chinese fan (what you consider “creative” I consider drunken dorm hacks) but they are right that MSG deserves a place on our tables as much as Sodium Chloride does. The racist canard known as “Chinese Restaurant Syndrome” has been put away by science despite what Barbara Tropp (a Flower Child-era Jewish girl from New Jersey) would have had you think.

“Farmers market style” ingredients? Tropp didn’t bring that to Chinese cooking. She got it FROM Chinese cooking. Chinese cities have (official or unofficial) “farmers’ markets” on nearly every street corner, and home cooks typically shop there twice a day. They ALSO use MSG (even if they think they are only using “chicken essence”).

I haven’t eaten at Mister Jiu’s, my impression from looking at their pictures and price point is that this place seems to be going for an upper end of the quality/ price spectrum. What I was trying to get at was whether places like this needs a generous dose of added glutamate to achieve the umami effect, to the point that one may need to drink lots of water to process the added glutamate afterwards.

Not that Hyperbowler said they added a lot of salt, but I’d probably make the same argument that restaurants like these should seek to achieve a taste and sensory balance by not overloading their dishes with salt as well.

An analogy- a person doesn’t typically walk into a typical Cal cuisine restaurant like Zuni Cafe and expect dishes with lots of MSG.

My question for Hyperbowler- how do you tell that the dish had MSG?

I’m not a Mission Chinese fan (what you consider “creative” I consider drunken dorm hacks) but they are right that MSG deserves a place on our tables as much as Sodium Chloride does. The racist canard known as “Chinese Restaurant Syndrome” has been put away by science despite what Barbara Tropp (a Flower Child-era Jewish girl from New Jersey) would have had you think.

My choice of words “most creative” was intentional— there’s not a lot of experimentation with Chinese flavors nowadays, drunk hacks or not. Meanwhile, even neighborhood restaurants are playing with Korean or Japanese flavors (kimchi reuben at Dark Horse Inn). The interesting newer Chinese stuff is inspired by dishes overseas (yes, there are more interesting traditional dishes than anyone can possibly eat, but it’s nice to have something with a local identity). Some newer dishes at Benu and State Bird Provisions and the underwhelming clamshell bao fad. No restaurants specializing in creative Chinese except the divisive MC, which is inconsistent and has dishes that are often not as good as the source material.

Right, Tropp’s goal seems to have been to challenge American conceptions about Chinese food. I don’t get a sense from her writing that she was trying to bridge the cuisines in a bi-directional manner, which Jiu is in a position to do (I’m curious what he’ll serve (and charge) when he rents out the banquet hall above the restaurant).

I agree— I have no problem with glutamate, just its overuse, the same way I don’t like too much salt or sugar. I like it in salt and pepper squid, and would find Jiu’s dish bland if the soy dip weren’t there (fennel was good on its own).

I was quite happy with my stop by the bar the other night–I’d definitely stop by again, and like the news I read today that they are offering more flexibility in the dining room, including a 3 item menu for $45, http://sf.eater.com/2016/7/27/12260704/mister-jius-chinatown-san-francisco-menu

The bar menu is substantial enough to make a meal out of, with enough choices and menu changes to make it worth coming back relatively frequently. I really enjoyed the Devil’s Gulch Pig Head, which was some of the best cured pork I’ve tried in quite some time. It was delicious on its own, but also played well as served with a very thin amaranth cracker, french green beans, a bit of radish and sunflower seeds, some hints of five spice, and a “tea egg” which was a quail egg encased in a tea gelee. I enjoyed the pan fried buns well enough, but found the bamboo, mushrooms, kale, and tofu filling to be the sort of thing that sounds just like what it is–your vegetarian friend made a healthy dish, which tastes fine but not exciting. Since the buns had a nice spongy texture and were well crisped on the bottom, and partially crisped on the sesame-studded top, I wished there were some delicious pork juices to soak into the bun. Or some creative take.

Ha! I regretted not ordering the shrimp toast, as it’s one of my favorites from childhood Chinese takeout. I assume it involves deep fried bread, though.

No, surprisingly it’s like the pan fried bun you described 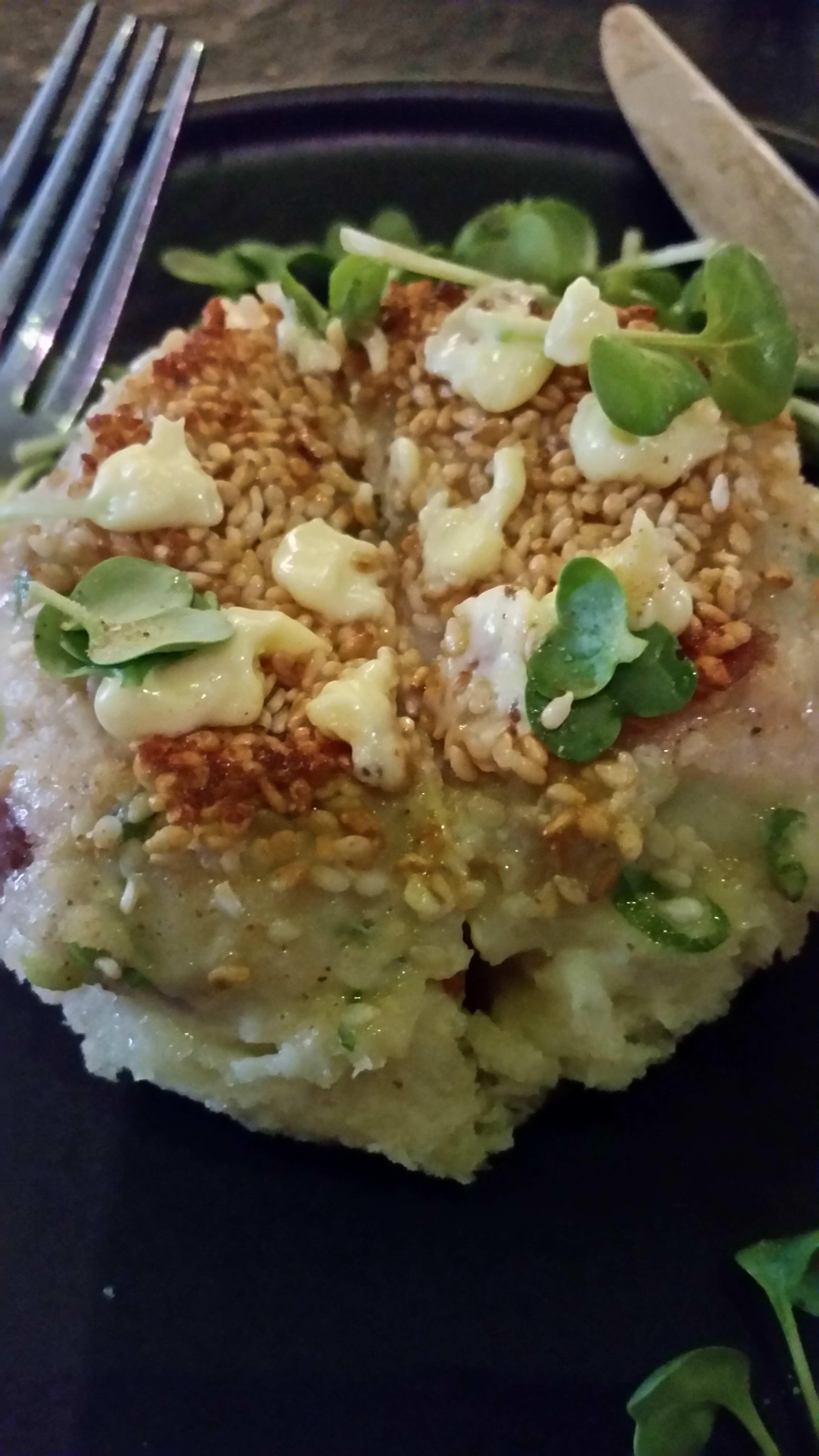 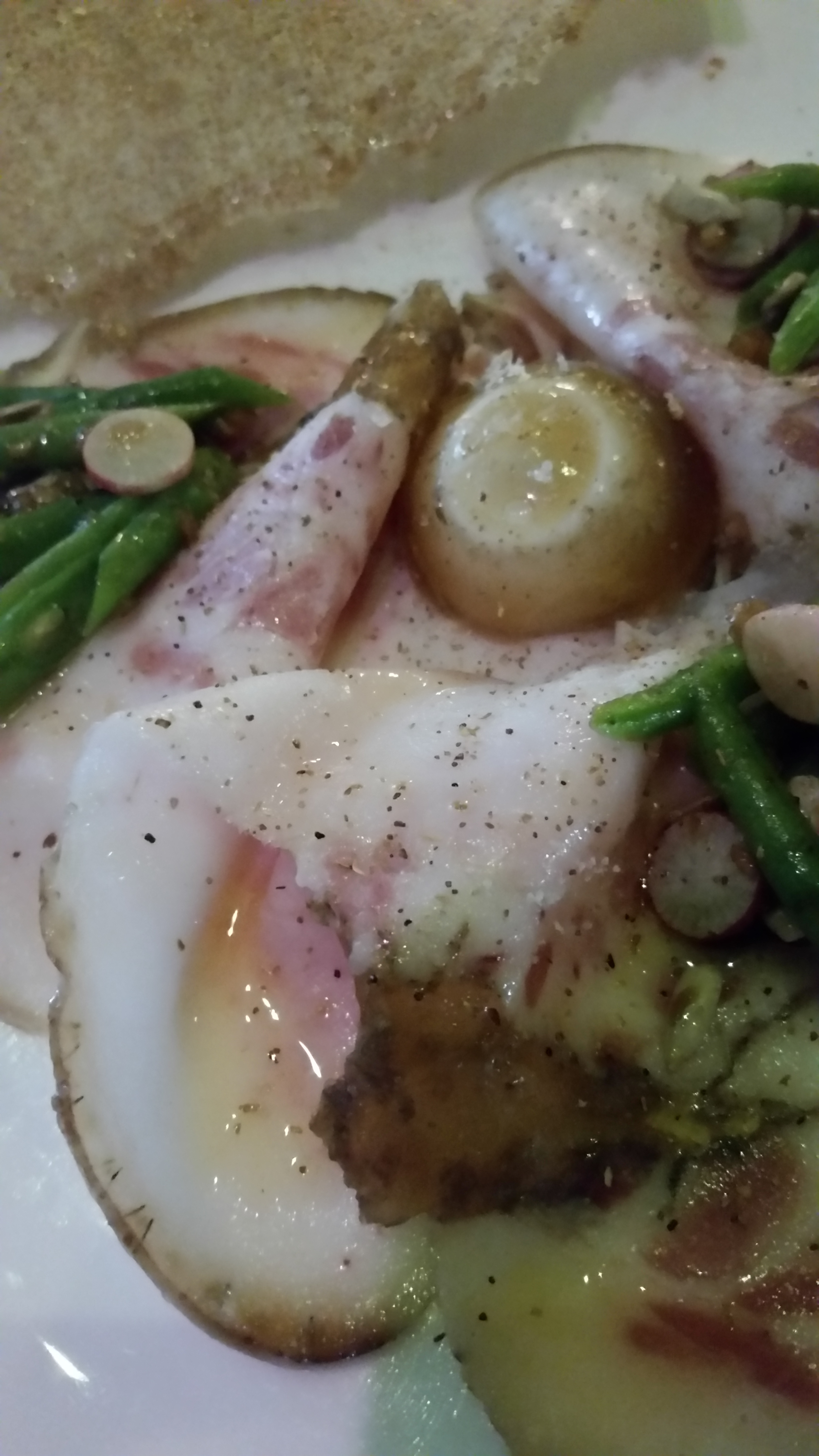 Yes, very fatty of course! might be nice with a scallion pancake wrapper, bun or crepe

Tried the salmon and the salt baked trout, while both were tasty, I wish they had been cooked just a bit less.

They got a star. Now they can go raise prices.

Are they star material?