As a companion to a discussion of hand-pulled and hand-stretched noodles, let’s talk about other Chinese wheat noodles made in-house without machines. In some of these types of noodles, rolling pins flatten out the dough to a uniform height, and knives cut individual noodles. In other noodles, scissors, knives, or special tools chop off noodles straight off a mound of kneaded dough. These noodles contrast with hand-pulled and stretched noodles, which the hands themselves stretch mid-air to the desired size.

Where do you like to eat these types of noodles, where else can they be found, and which noodle-types and preparation are your favorites? I’m also hoping the entire Hungry Onion community can guide us about noodle-theory (see also a Home Cooking thread).

Except for jook sing noodles, which contain both egg and and possibly an alkali substance to make them hard and springy, my impression of the noodles listed here are that they are soft and chewy and they stick to your teeth. These noodles mostly contain just flour and water. This makes them very different from most Italian pastas, which get an al dente texture either with hard semolina wheat or eggs.

Search here on Hungry Onion or Chowhound for other opinions of linked restaurants and their noodles. Restaurants are in SF unless otherwise noted and y*lp links are provided for addresses, hours, and photographs. 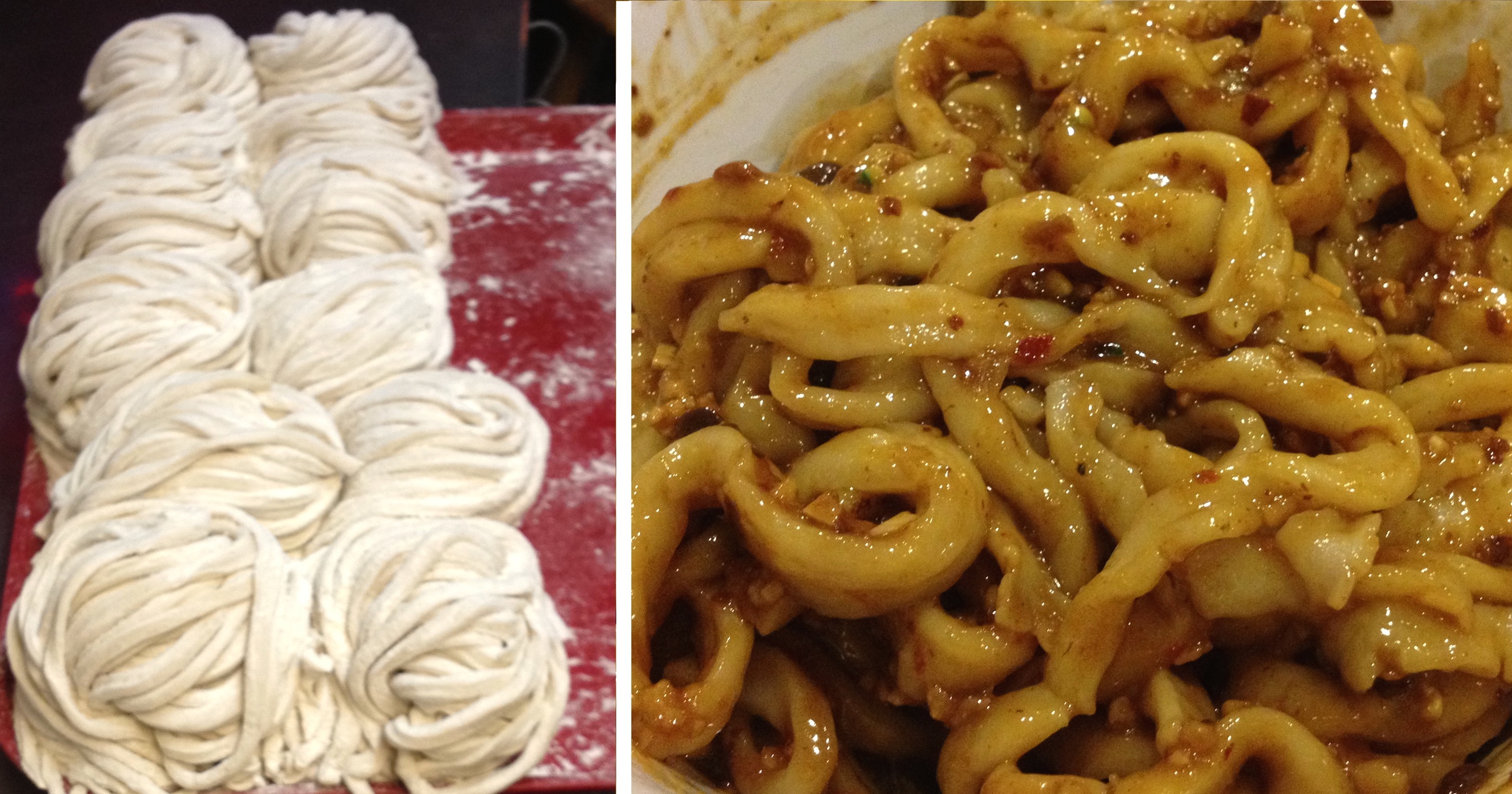 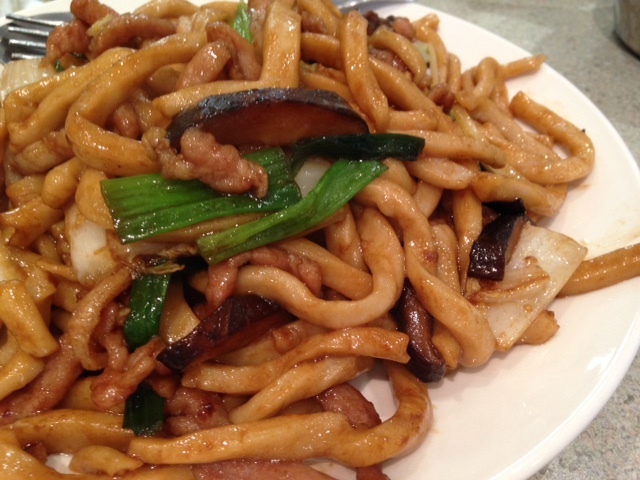 Shape : long and thick, flattish rather than square, dimples along the length
Origin region : Shanghai
Ingredients : wheat flour, water, salt, oil
Technique : roll dough into a large rectangle, and cut into strips. For extra effect, one hand feeds a strip to the other hand, which leaves indentations as it flattens and tugs it, and then does a final waving motion for extra stretch. I’m not sure whether any local restaurants do that last step, in which case, other than shape, I’m not sure what distinguishes Shanghai noodles from generic knife cut.
Video : Hand made noodles, shanghai style fried noodles, soup noodles. 拉麵 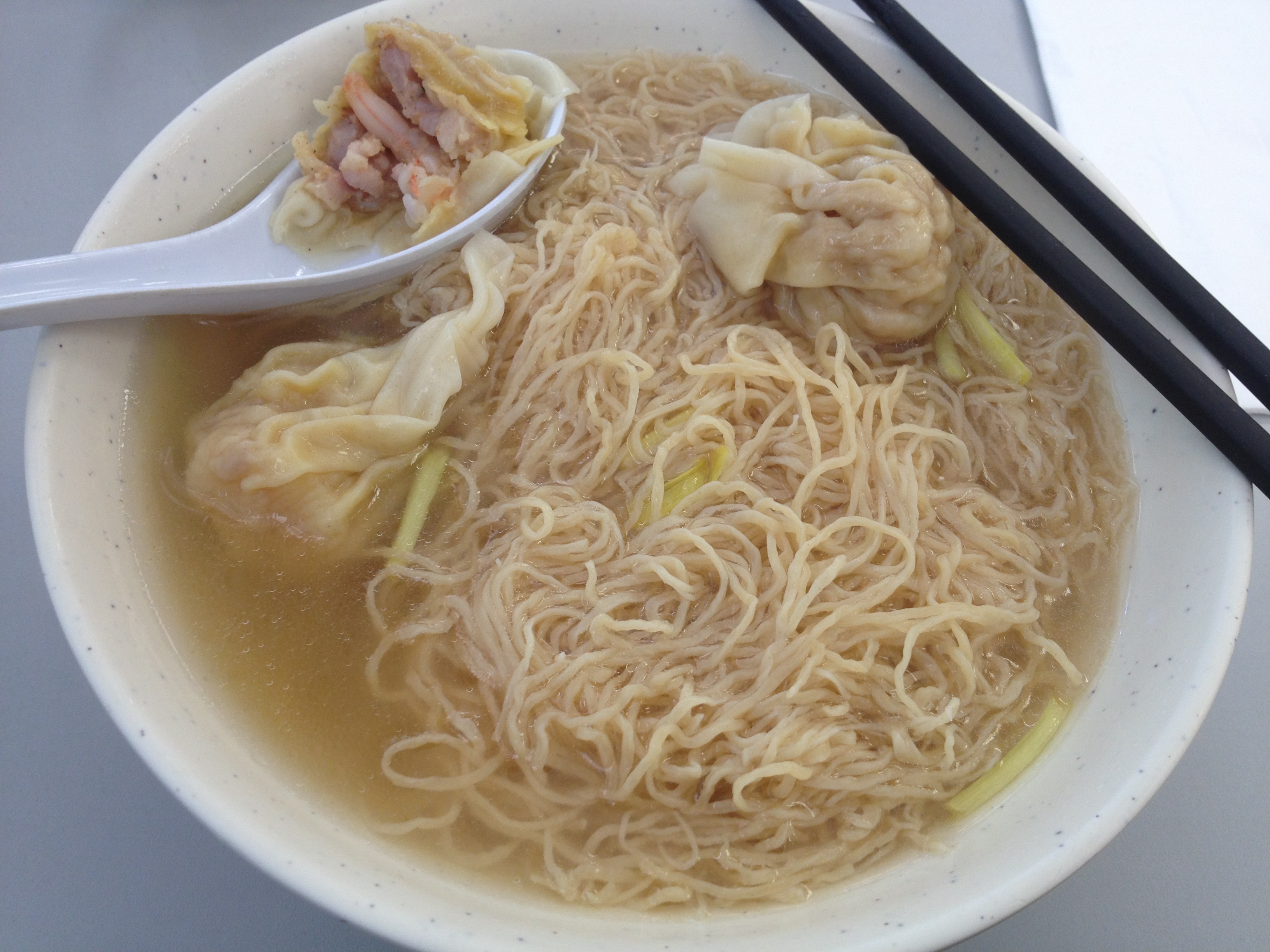 Restaurants (soup) : allegedly at King of Food Garden (formerly known as King Won Ton), but not made on site.

Shape : thin, long strands
Texture : good bite, springy
Origin region : Guangzhou, Guangdong
Ingredients : wheat flour, egg, alkaline?
Technique : the mixed dough is kneaded with a bamboo pole that’s controlled by a man riding it up and down. Sheeting and slicing into noodles may be done with a machine.
Video : Bamboo stick noodles and another video
Other : Richard Sun, owner of Tong Kee in Daly City, told me he would make jook sing noodles back when he owned five Bay Area restaurants. He said the noodles did not require alkaline (kansui) because the technique ensured a stable dough. Like most, if not all Cantonese places that make noodles in house, he currently use a machine to roll and cut their wheat noodles. The fresh egg noodles in the wonton soup use a high-gluten dough. He used to put kansui in the dough, but stopped using it because the noodles are made fresh every day and didn’t need kansui to preserve their texture. They also make fresh noodles for Hong Kong Style chow mein, and house made Shanghai noodles, which are thick and use all-purpose flour. If you know of Cantonese places that roll and/or cut their dough by hand, please let us know. 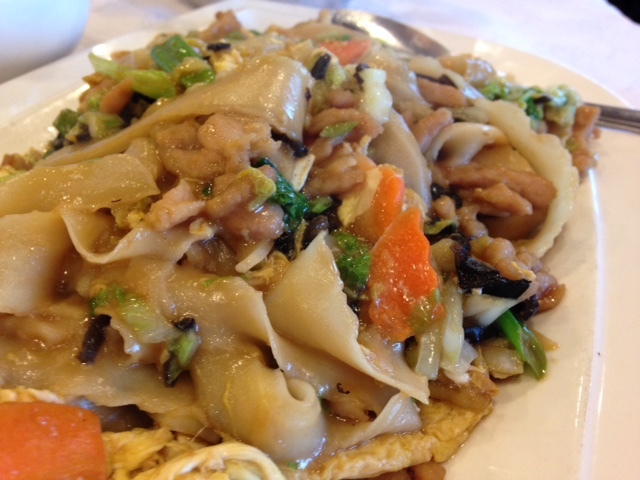 Restaurants (stir-fried) : M.Y. China (unknown if they use cornmeal) 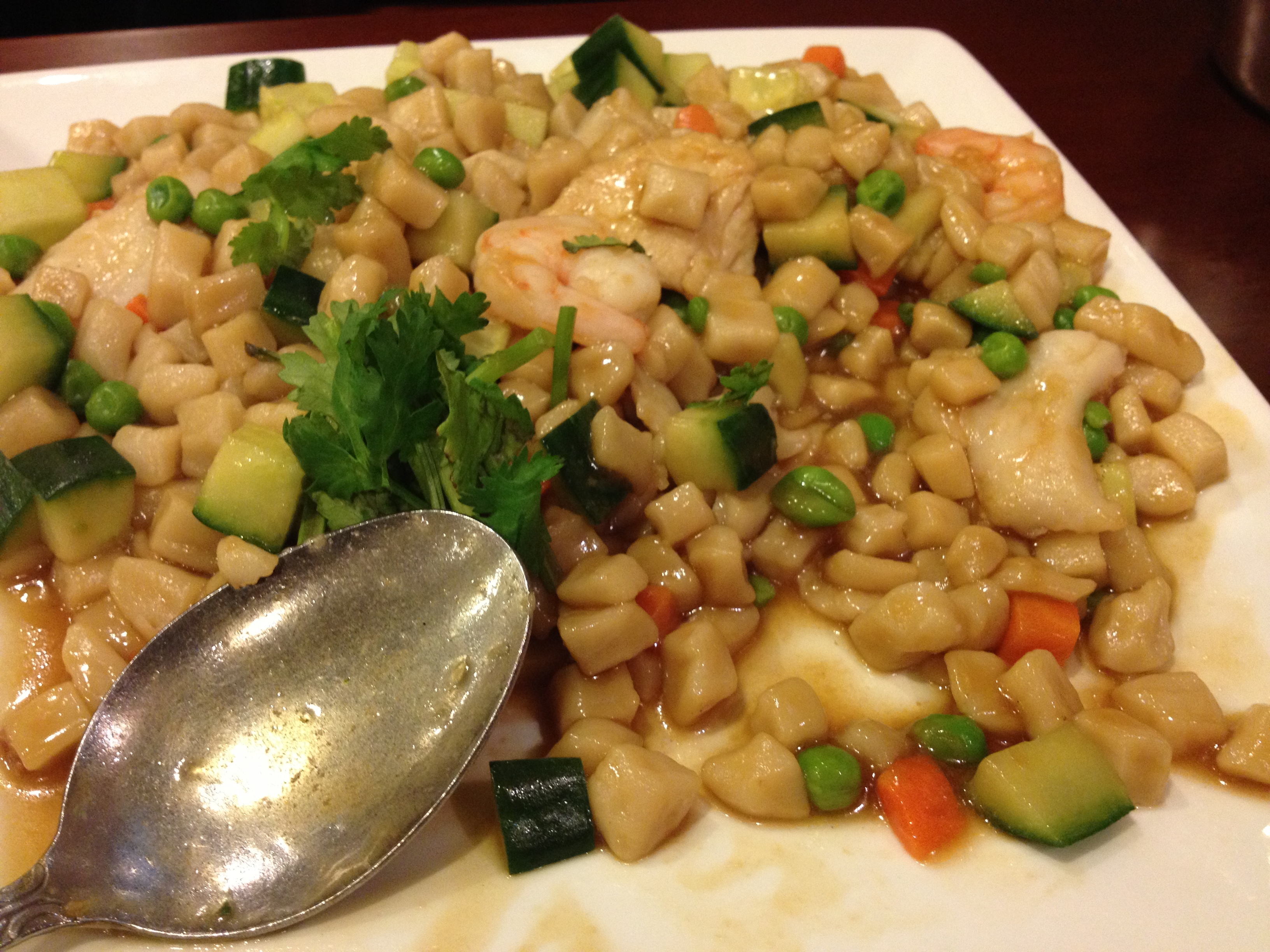 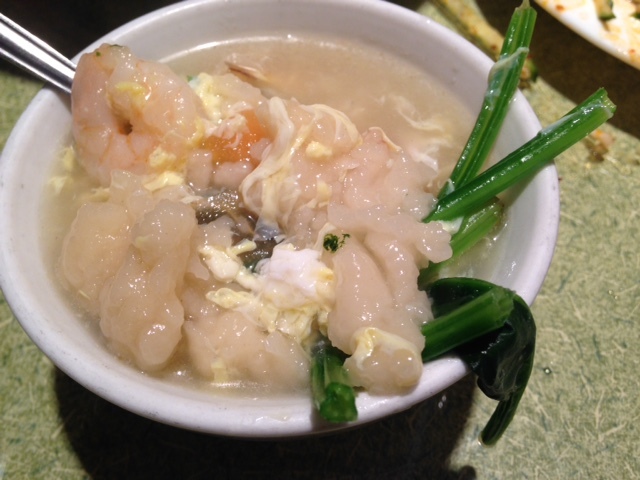 the mixed dough is kneaded with a bamboo pole that’s controlled by a man riding it up and down.

Women hold up half the world (and ride half the bamboo poles). 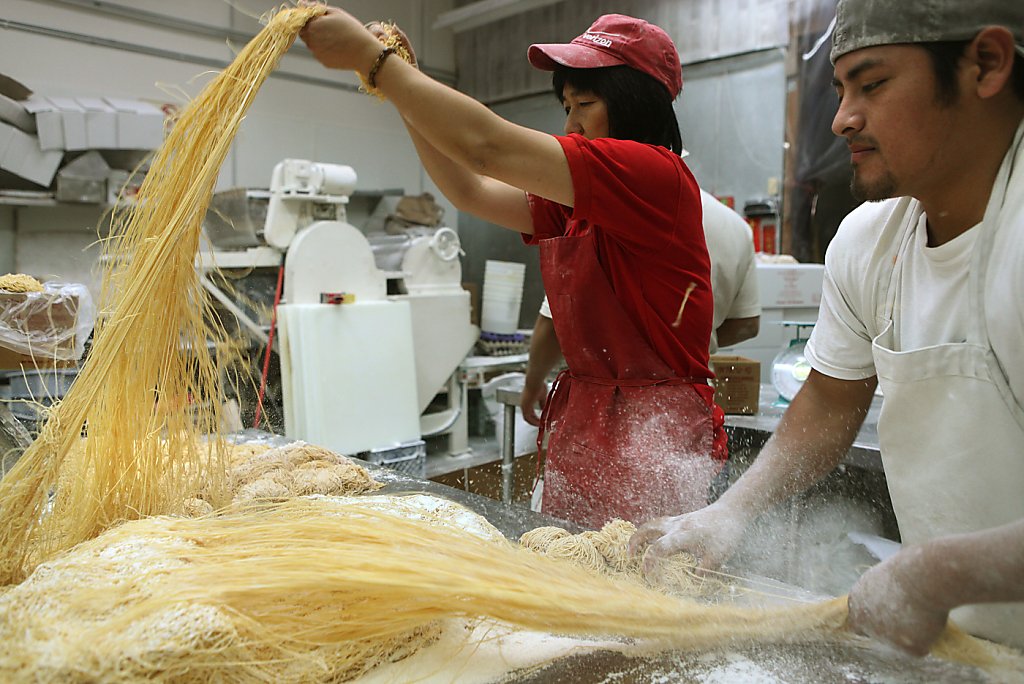 In large part that's because much of this square is dominated by the remains of the...

Xin Feng Liu, the woman in the picture, was “Previous President for King of Wonton & Noodles (U.S.) Inc.”

Good point about who shares the workload!

Thanks for that video too— I’ve been wondering what local noodle operations look like. It also suggests that they use chicken eggs instead of duck eggs.

Wow, thanks for all this great information! I haven’t tried 90% of the places you mention, I must try more.
My favorite so far are the XO sauce knife cut noodles at Joy, for the incredible texture and non-generic soy sauce flavor. I like that the noodles aren’t too uniform, so you will get some noodles that are chewier than others. I’ve had the same noodles in their beef noodle soup but I can’t eat it fast enough before the noodles soak up the liquid and lose their texture.

XO sauce noodles? Whoa, that sounds fantastic— I like their knife shaved noodles, but found their mu shu preparation too MSG heavy. I’ll stop in next time I get supplies at nearby Marina Food (btw, is it the knife shaved or knife cut that you’ve had there?)

Yeah, there are so many places in the South Bay to try— I’m hoping Hungry Onion can attract more people who live there to share tips.

Yes, knife shaved, not knife cut, my oversight. It’s XO sauce with seafood. Even if it’s not on the menu you can ask for it. I haven’t checked to see if it’s on the menu in recent years but it certainly was the last time I checked. Never had the mu shu version.

Last night I asked if they make the hand cut noodles with fish. They do and it’s on the specials menu, though I forget now exactly what they call it. The version with fish is different than the combination version. The fish I believe is fried basa fillets. The dish has more sauce and is spicier. It had lots of onion, leek and bok choi. The sauce was spicy and gingery with some Sichuan pepper as well. The combination of the tender and crispy fish with the toothsome noodles and spicy sauce was excellent. I recommend this dish. 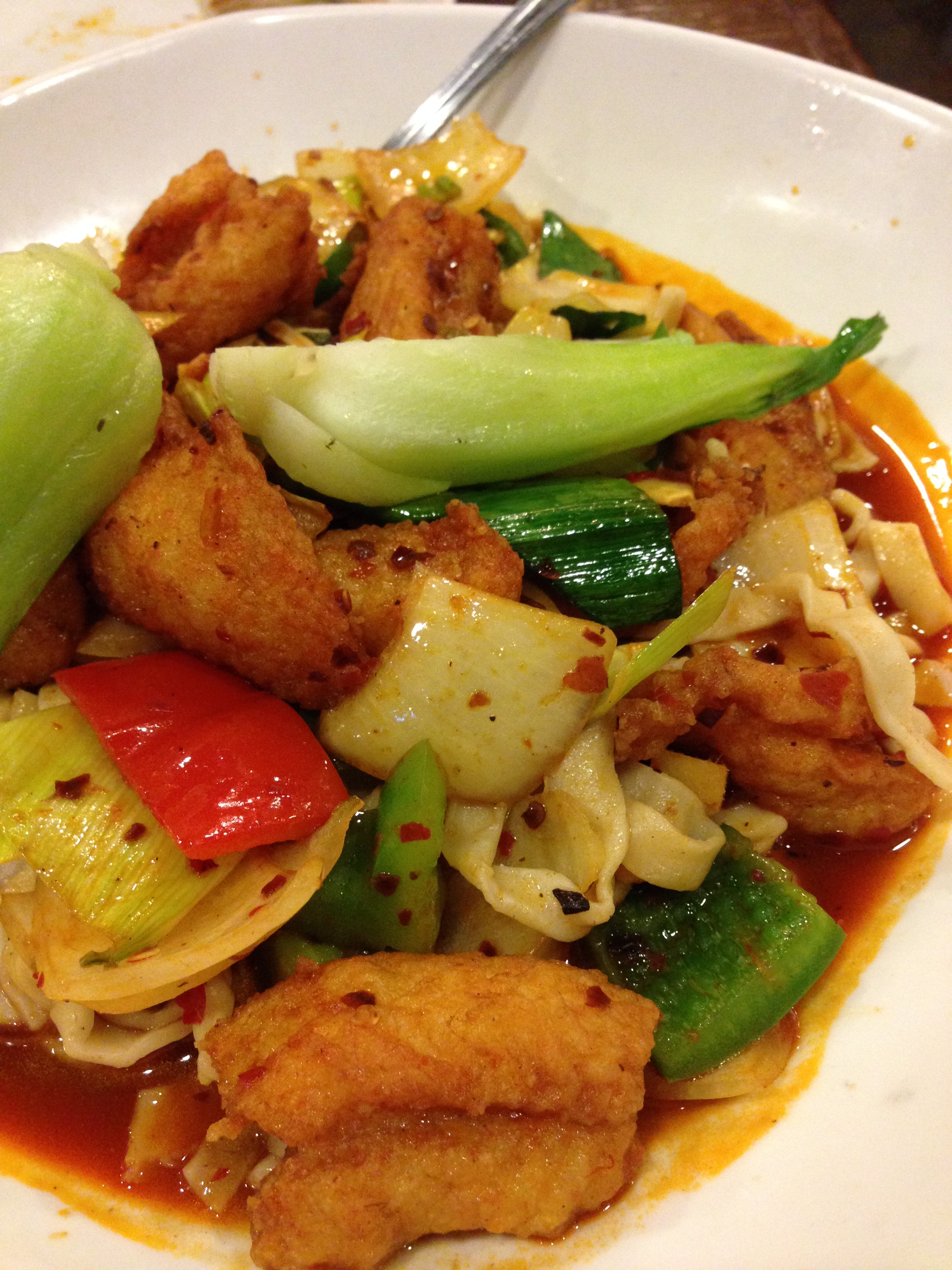 I had that last week with an old friend, and can attest to its wonderfulness. They changed it recently–the fish used to be stir-fried (“boiled”?) with the veggies, not fried separately. They still have the “boiled” fish version someplace on the lunch menu.

Jook sing noodles are common in cantonese restaurants around here if they serve wonton noodle soup (not to be confused with wonton soup) and lo mein, which is the same noodle, on a plate, with the broth served on the side for one to mix and combine.

Examples of places that serve these noodles- the caveat is that I have no idea whether they are made the traditional way of having a person riding up and down a pole. But given the time and effort involved with handmade noodle and the generally low cost noodle dishes at these places, not many, if any, are likely to be handmade. Also this is not an endorsement of quality. I think they are ok, but not transcendent.

This one is fantastic, but alas it is in Mak’s Noodle in Hong Kong, with the bowl kept purposely small to prevent the handmade noodles from getting soggy: 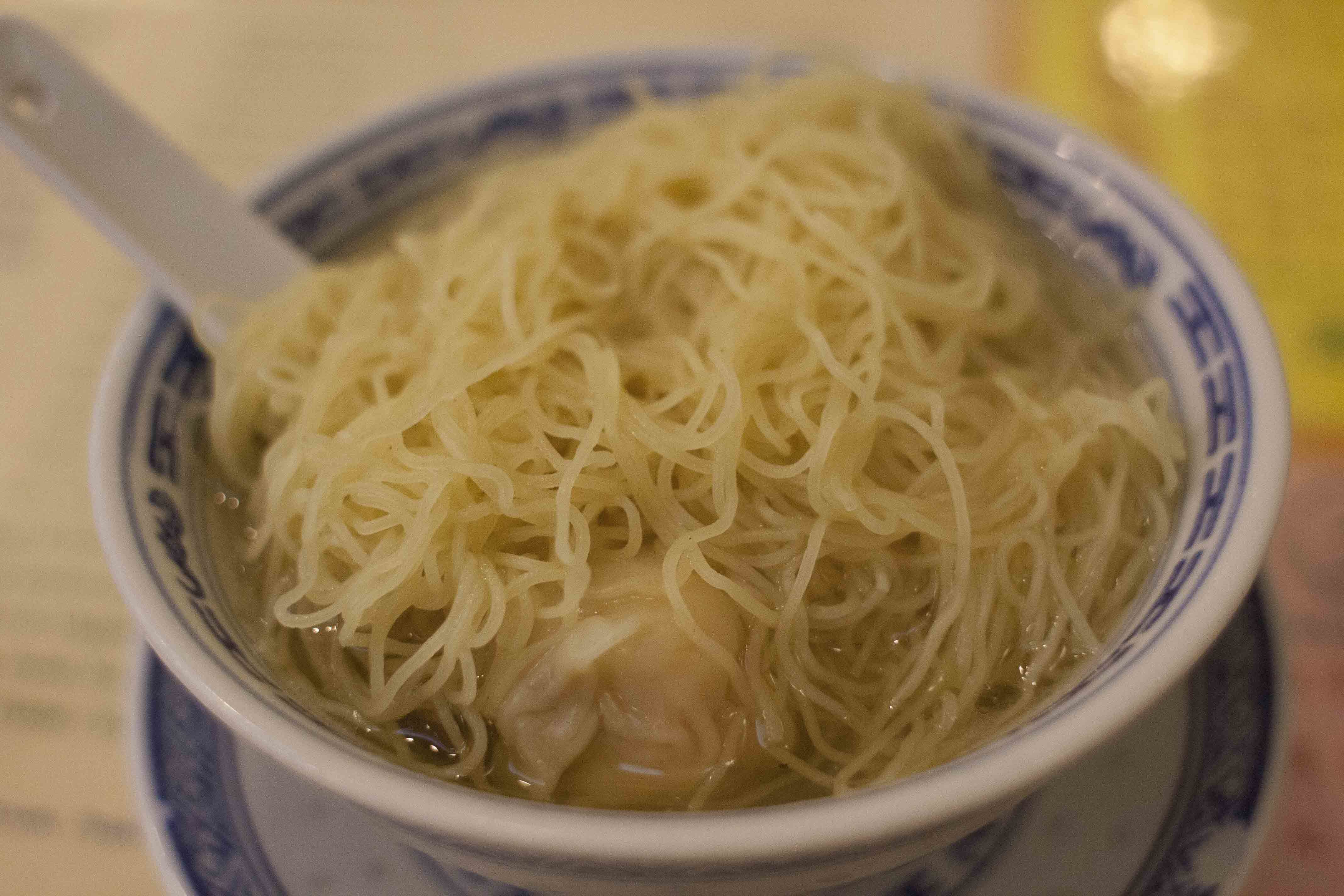 It’s quite possible they are made the traditional way by San Francisco’s North American Noodle Company.

In large part that's because much of this square is dominated by the remains of the...

aha! totally unaware of this place. There’s hope after all that machines haven’t replaced all the poles! Thanks for sharing.

MY Dumplings in Milpitas makes their Shanghai thick noodles in house.

I’ve had the hand cut noodles at China Village a few times and haven’t been thrilled with the noodle texture, as the lunch dishes are generally a bit soupy, and the noodles seem a bit soggy to me. I went recently with friends who are terrified of spicy food, and one ordered the chow mein with handmade noodles from the regular menu and I really enjoyed this preparation–the soggy gumminess is more of a springiness when wok fried. 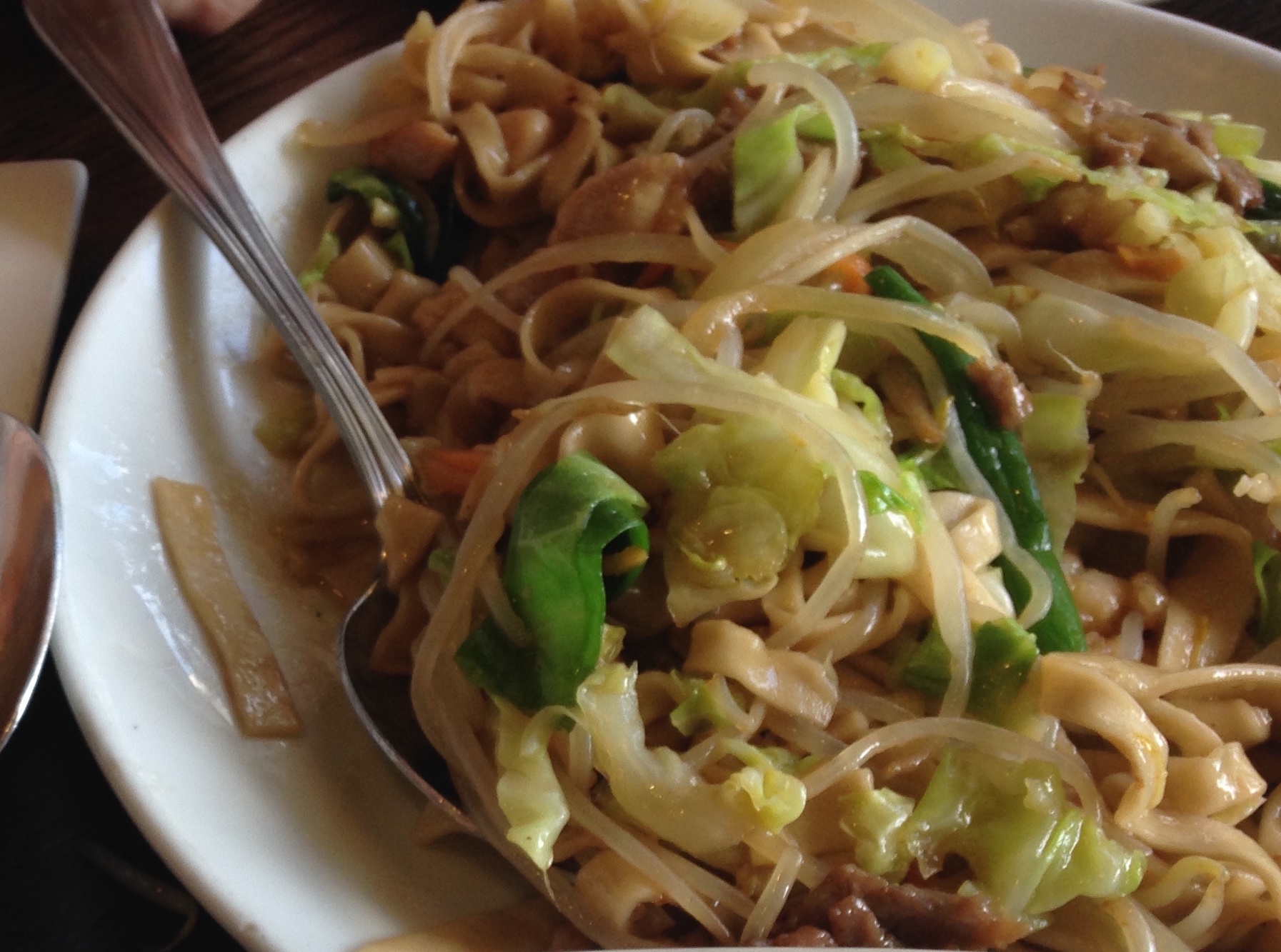 I think a lot of wheat based handmade noodle soups suffer from gumminess, especially as I get toward the end of the bowl. I usually order my handmade noodles stir fried to avoid this. Other types of noodles don’t seem to suffer in soup.

Where would you put rice noodles as a category?

There is a new place in Santa Clara that serve Changsha (Hunan) style rice and regular noodles (Yum Noodles). I have not been and am not familiar with noodles from Changsha, besides being told that its very spicy. A search of the regional specialties or Changsha noodles didn’t turn up anything.

Noodle Talk (Sunnyvale), Yum Noodles (Santa Clara), and Hometown Noodle (San Jose) are three Hunan noodle places that opened in the past year. I hope someone knowledgeable about this type of noodle can chime in about what distinguishes these noodles (do they use fermented rice like in guilin noodles?), and how these restaurants rank.

I liked the noodle dish I had at Noodle Talk (see my Chowhound post http://www.chowhound.com/post/noodle-talk-hunan-sunnyvale-1015883 ). IIRC, those noodles were round and therefore extruded (fresh or dried, I don’t remember).

My impression of the noodles there and at the Guilin noodle places (there are a bunch now) is that the noodles are made off site. Is that accurate, and is there any advantage to making rice noodles on site? There’s certainly a difference in quality between tired supermarket fresh rice noodles and the ones you can pick up for $1/lb. at Kun Wo in the Mission, which they cut for you to order.