Within the same large seafood restaurants that serve serve dim sum during the day, the banquet halls open up at night and have an entirely different menu. Tanks full of live seafood are on display such as fish, shrimp, crab, lobster, and other shellfish. One notable local delicacy, the dungeness crab, is often found in tanks especially around winter to spring times. Beyond just the seafood delicacies, these large Cantonese restaurants also provide a plethora of non-seafood specialities from suckling pigs, double-boiled soup, veggies served over superior stock, and yes, even sweet and sour pork spareribs. Wedding banquets, holiday celebrations, or just a get together in a large round table with numerous dishes brought throughout the night makes these restaurants a fun (or depending on company… a torturous one) and enjoyable event.

Where to eat? Well, the restaurants tend to be quite similar to the places that serve dim sum.

These Cantonese restaurants are in some ways more of your hole in the wall restaurants or neighborhood go-to places. Compared to the large seafood banquet halls, the menus are a little more truncated and typically have less seafood options.

@Night07, for basic steamed seafood, do you notice a big difference in quality among the top places? (also, which are your current favorite places for steamed seafood

. What are other people’s current favorites? @vlo?

Hmmm… sometimes I can never tell if its the season or when I’m ordering the fish or type of fish. For the basic black bass I found most of the purveyors to be relatively consistent. I could have sworn that I read in some article there are only two or three main distributors for seafood in the bay area. Also note, half the time I could’ve sworn I’ve seen a certain bass called something else before so I really kinda gave up on figuring out what is what at times.

However, in the bigger/fancier (i.e. more expensive) places there are often bigger selections of deep water fish. I recall HK Flower Lounge had a large selection.

But mmm… I usually just try to rotate restaurants and hope that this place does better than the last place. For ease of access I usually go to Tai Yuan but they tend to have usually a 3/4 fish selection (the typical black bass, some sort of rock cod, maybe a grouper, and probably a flat fish of some sort).

Buy your live seafood from one of the stores before they close around 6 PM, and take it to Imperial Soup in Oakland Chinatown at a $5/dish prepping & cooking charge! Also don’t forget the newer steam hot pot places which specialize in live seafood.

Actually, vlo do you have any good guides or info on all the fish that’s seen in the bay area? Half the time I’m never too sure on whatever grouper the servers mention is the actual fish that’s from Asia.

Anyone know of a good viet/chinese house lobster in the style of newport seafood in socal somewhere near sunnyvale?

Oh yeah, I second this request or something similar. I believe Newport Seafood’s lobster specialty is a Teochew style preparation. Pic from last summer. 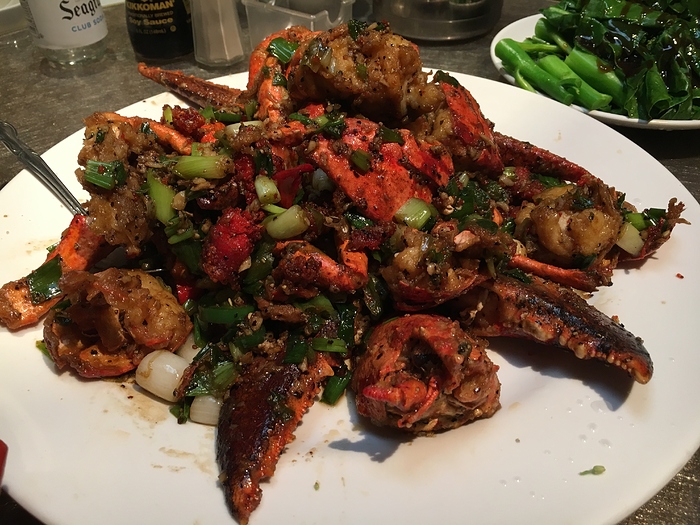 The 4.75 lb. beast was chopped and cooked so that the meat was enhanced, not overpowered by, ginger, scallions, chili, and sugar.