Cheung Hing in San Mateo just opened and we stopped by for dinner. Cheung Hing also has branches in SSF and Millbrae.

Since Cheung Hing has a reputation with roasties, we had the roasted duck/ roasted pork combo plate rice. The duck was pretty good with a glistening layer of skin, though the skin was on the rather salty side. The roasted pork looked to be a slab of belly, had a good combination of fat and lean, and also a bit on the salty side. 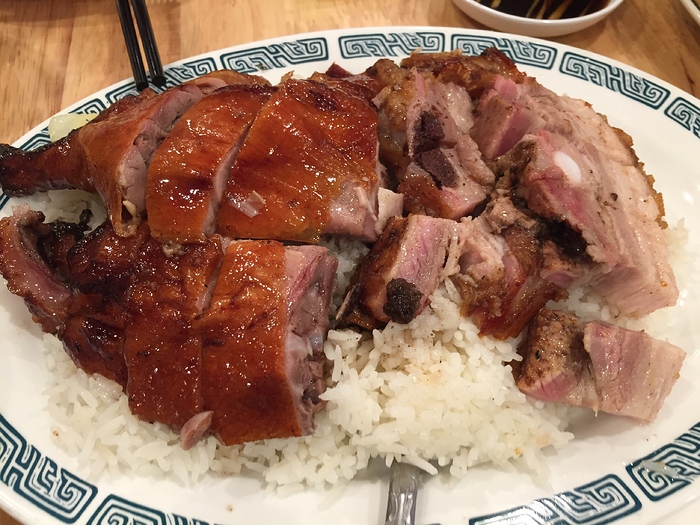 The claypot rice with salted fish and minced pork. With it being a claypot dish, it took a while to come out, but the amount of soccarat was minimal. The layer of rice next to the pot was a little dry, that’s it. Needed a bit more fire and heat to add to the dry layer. 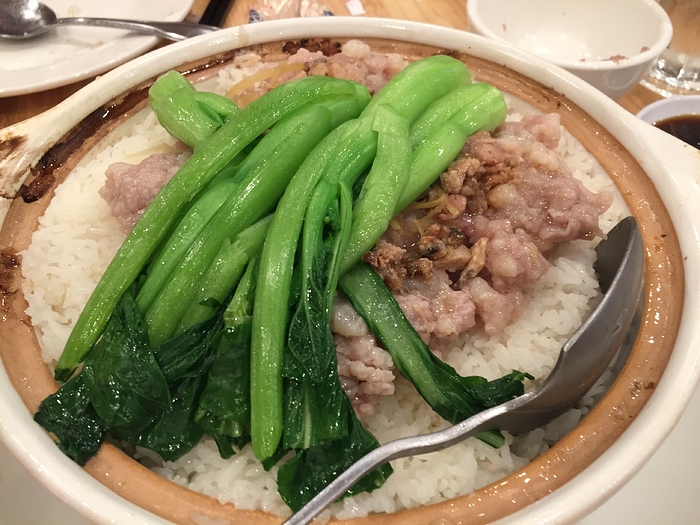 They also recommended the Shanghai xiao long bao. I asked why and they said they have a Shanghai chef who covered the Shanghai side of the menu. These were decent though I preferred Panda Dumpling’s version in nearby San Carlos. 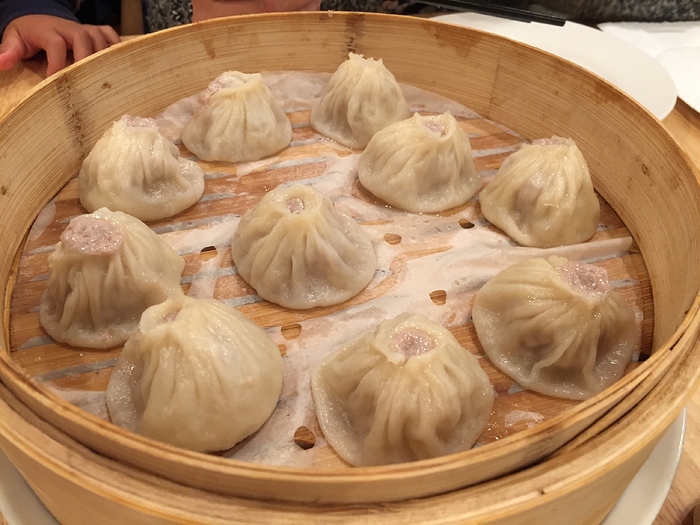 Also got a plate of sauteed pea sprouts. Pretty standard, a bit fiberish with the weather being a bit warm.

Overall, I think Cheung Hing fills an all-purpose decent Cantonese void along El Camino in the lower Peninsula for those who don’t want to venture into Foster City or trek down to Mountain View/ Sunnyvale. Though I prefer Cooking Papa in general, though not the specific dishes in question. Business was pretty brisk. As in the case of many general purpose Cantonese restaurants, they covers many areas of Cantonese food that normally each be covered by a specialist restaurant in Hong Kong- like a claypot rice shop, a roastie shop, etc. But this being San Mateo, I doubt a specialist restaurant would survive.

How’s the other Cheung Hings in Millbrae and SSF? @Night07 have you been? 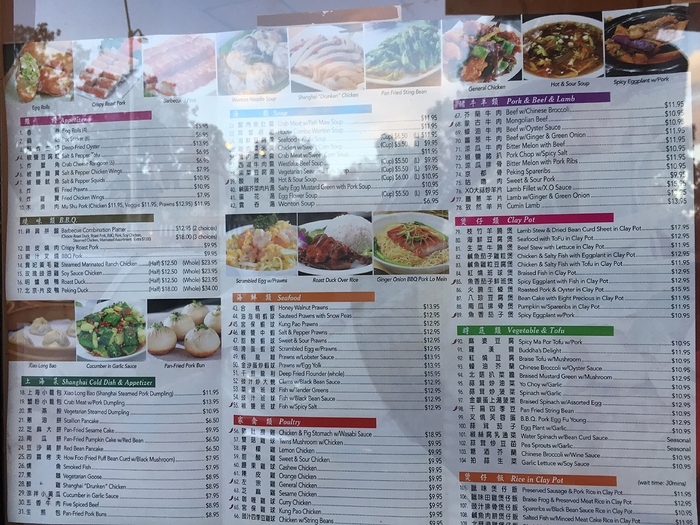 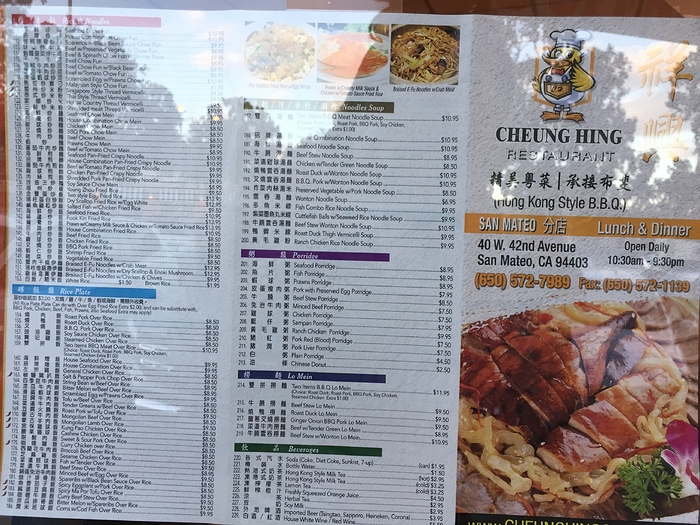 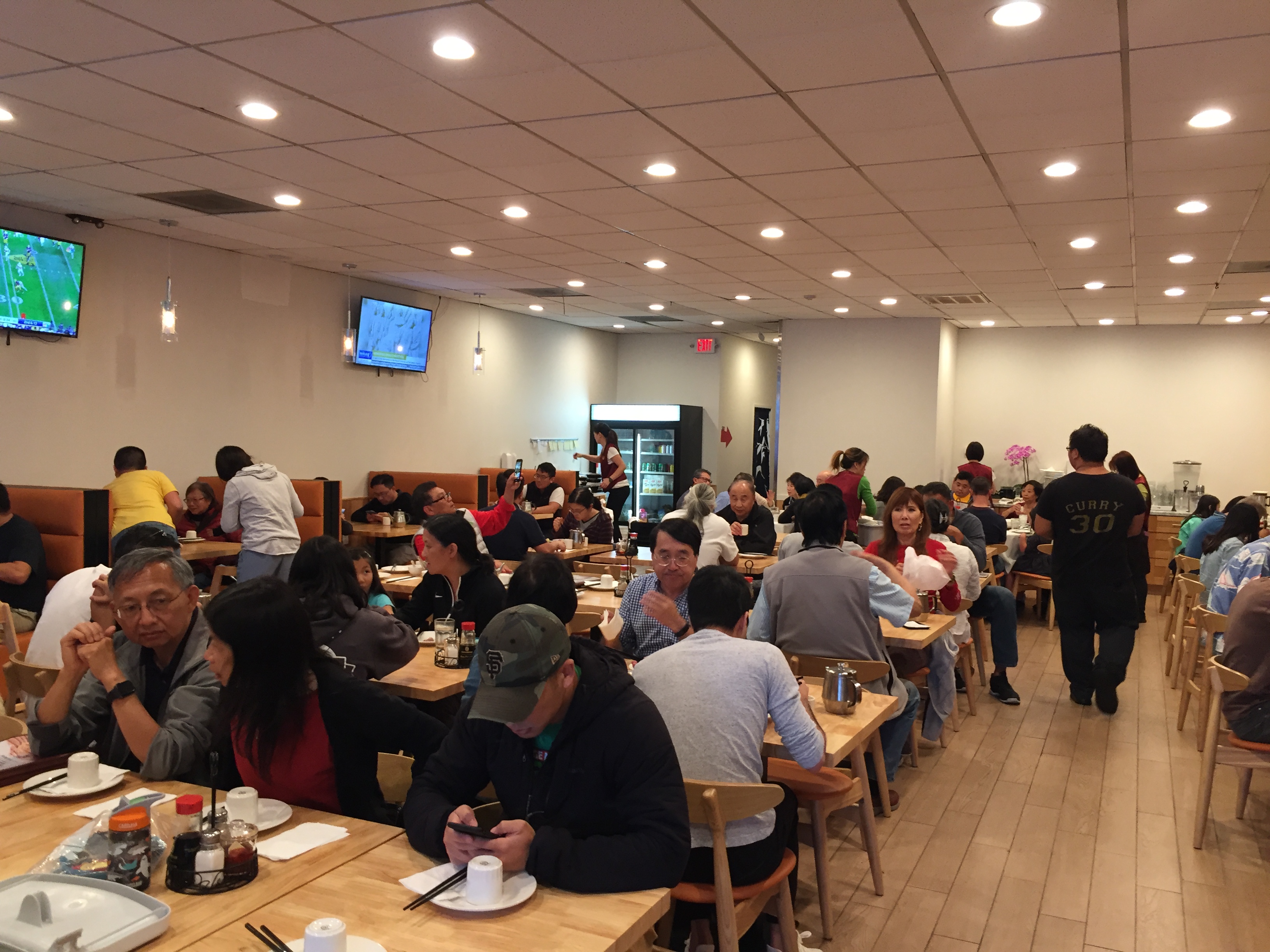 And what’s Hoodline doing highlighting all the wrong items? @hyperbowler I can now see what you meant when you said they autogenerate many of these pieces without a byline.

Cheung Hings in Millbrae is good. Have fun.

Huh, I never knew they were opening one in San Mateo.

Regarding the Cheung Hing in SSF, I’ve haven’t gone recently. I usually do the set family meals that you can choose like four options and it comes with soup, etc. And the food quality just seemed to be getting lower and lower (didn’t feel fresh) hence why I stopped going. The Milbrae location use to be really dead for dinner though, but I’ve noticed that there’s a brisk crowd. I ate at the Milbrae location about a year ago and I thought they were better than the SSF branch but I wouldn’t say its a fair comparison since I didn’t eat at them around the same time period. I do like their soups though.

What do you eat in Cheung Hing Millbrae?

Mainly because I was a little curious at how the Milbrae branch was doing, I went and tried it out for dinner.

Starting off our dinner was their double boiled soup (I heard the waitress mention that its underwater seafloor variant but… I’ve yet to figure out what exactly that entails). 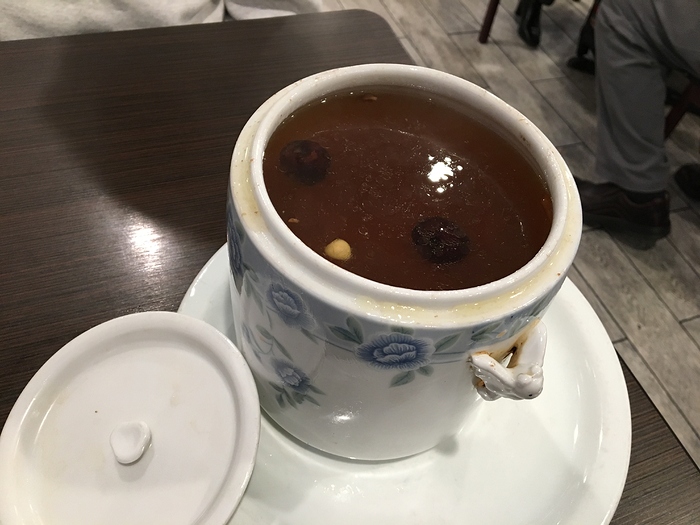 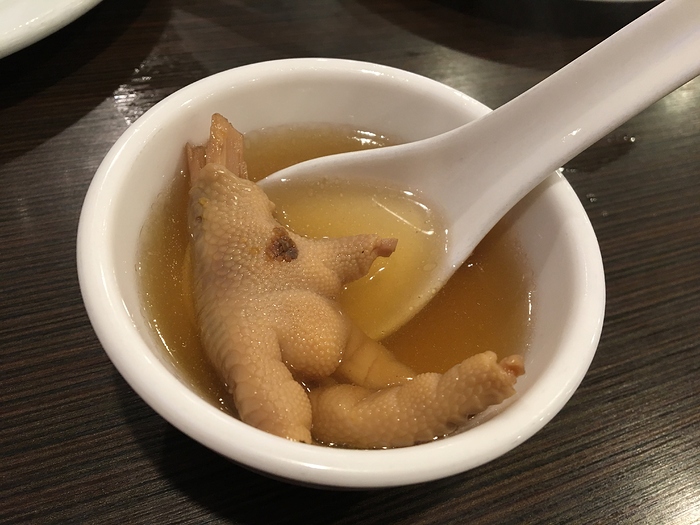 The broth with the nice golden hue warms you right up on these chilly nights. If you couldn’t guess from the giant chicken’s foot sticking out already, the soup has a lip smacking large amount of collagen. I didn’t take a picture of the ingredients but aside from the chicken feet, there were chunks of pork, chicken wings, drumsticks, a few cordyceps, compoy/dried scallops, and a few yellow beans. I actually like their broth quite a lot, quite savory and that collagen lip feel. I had plenty to take home and you can see the soup jiggle out of the container post-refrigeration. 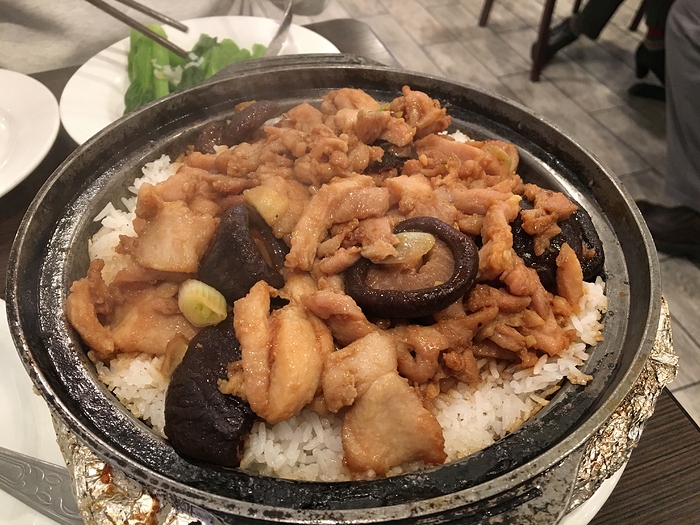 Next up, we had their medium-sized clay pot rice; this time with the shitake mushrooms and chicken variant. I was surprised that the claypot rice came out so fast (we did order it after sitting down and then figuring out the rest of the meal); guessing it might have been cooked in a less traditional manner. However, it had actually a quite nice socarrat bottom without any burnt bits–nice and crunchy. Personally I’d probably order the spare ribs or the traditional preserved meat version of the claypot rice though since I’m not a fan of the thinly cut chicken slices. The mushrooms were still juicy but I found the chicken on the dry end. Note, there are vegetables along with the clay pot that you can sorta see in the picture (they were removed before I thought of taking a picture). 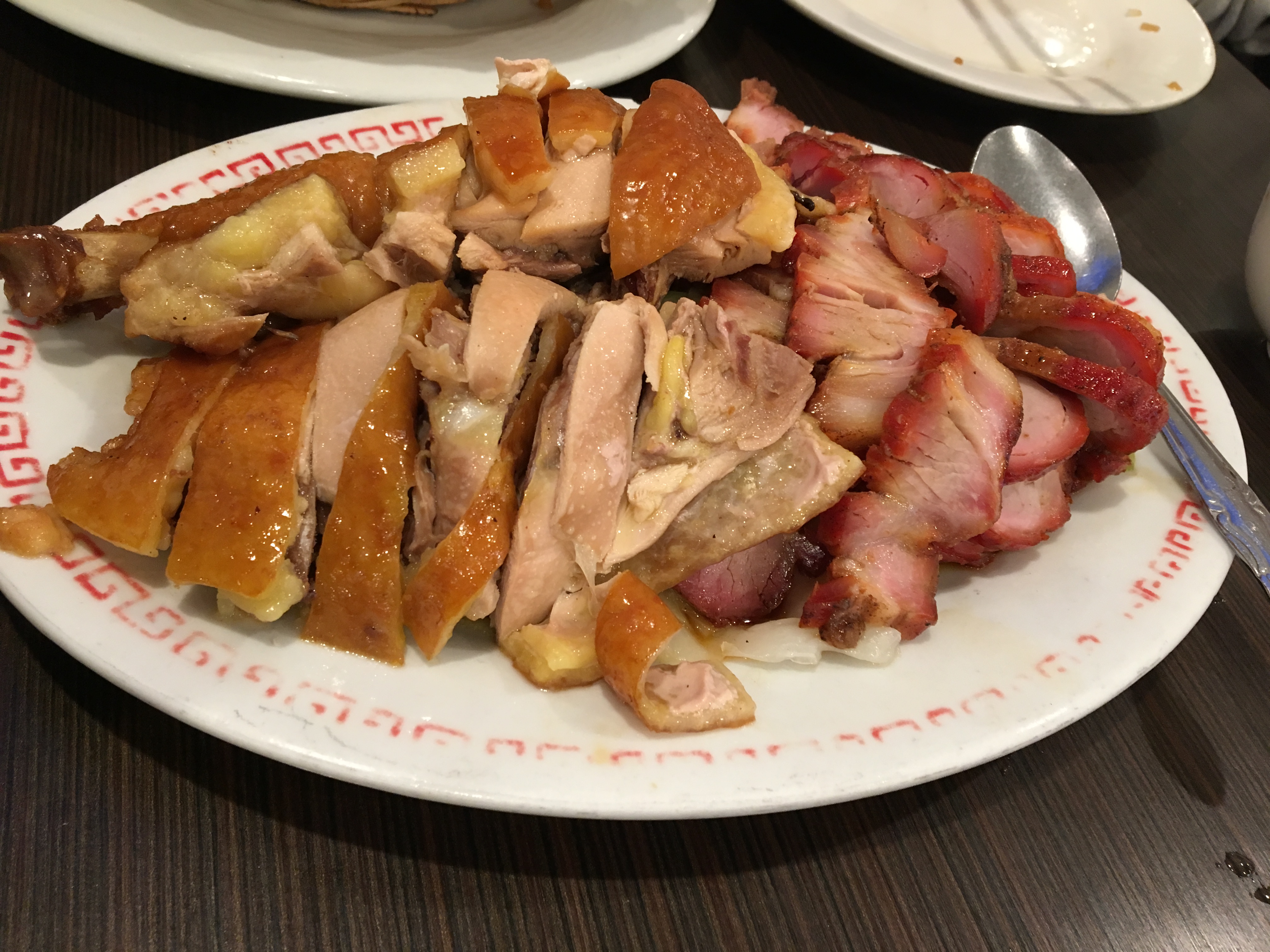 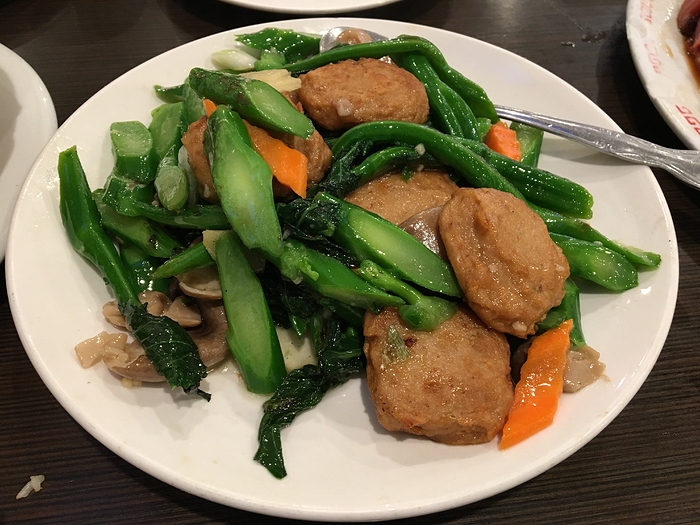 Lastly we got the gai lan with fish cakes. I was pretty disappointed in the execution of the vegetables. Unsure if you can tell from the picture, but gai lan was overcooked and on the softer end. The fish cakes were okay but I found them slightly fishy so eh… I wouldn’t order this again.

Service wise, there really wasn’t a large wait staff so it was a little problematic with getting tea refilled etc. I definitely will come back on the soup alone, but probably try a different set (or do the soup + item and choose an additional 4 dish combo).

Nice! Is their double boiled soup the soup of the day? Or did you have to preorder?

I am also wondering about the underwater variant…

In contrast, the last time i ordered claypot rice in the San Mateo branch, it took more than half an hour for it to come out.

Nice! Is their double boiled soup the soup of the day? Or did you have to preorder?

Yeah soup of the day.

I am also wondering about the underwater variant…

Well… that’s what they said, but the only thing from the sea was the dried scallops lol. So I’m not sure what they meant.

In contrast, the last time i ordered claypot rice in the San Mateo branch, it took more than half an hour for it to come out.

Huh, weird. I mean I still enjoyed the rice, wonder if I just got someone else’s clay pot maybe…

Well… that’s what they said, but the only thing from the sea was the dried scallops lol. So I’m not sure what they meant.

LOL. I think then lots of these double boiled soups can be called underwater variant then! I have a hard time thinking about soups where I can’t throw a few of those in!

So we went to Cheung Hing again since the weather is pretty terrible and we wanted a nice bowl of soup. 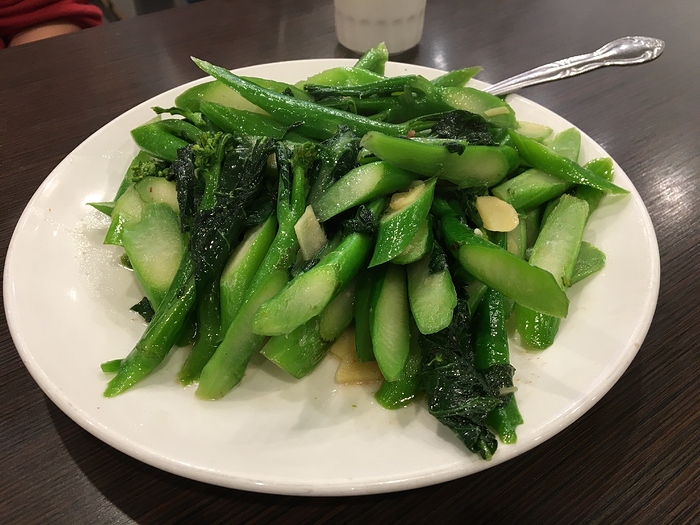 Starting off our order, we got the Chinese broccoli with wine sauce. I was quite disappointed in this dish. I’m not sure if looks apparent, but the vegetables were definitely too soft and overcooked. To me, they seemed to have blanched the vegetables for a prolonged period then stir fry the veggies. Whatever method truly occurred, it was not a good outcome. I initially thought they may have overcooked the veggies when we ordered the gai lan with fish cakes since it was a combo of seafood and vegetables. Alas, the vegetables were not cooked well. 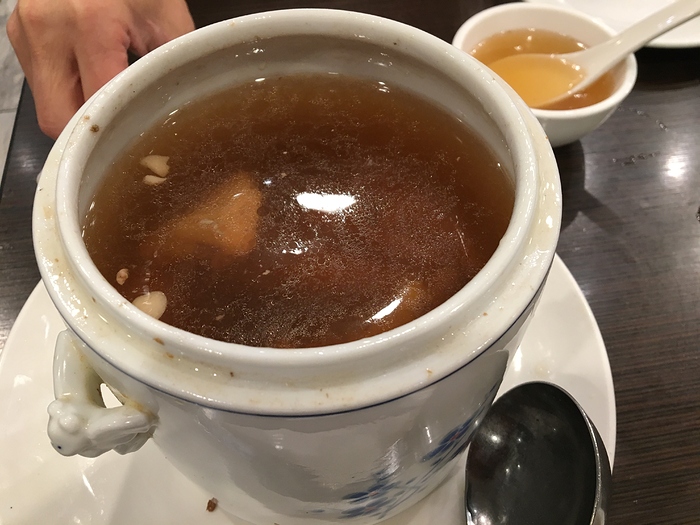 However, their double-boiled soup is rather well made with very savory undertones. This time this is the under-sea variant (I’m pretty sure last time was the cordyceps). Though the under-sea variant seems to just be the sea-coconut. Anywho, extremely hot and satisfying in these wintery nights. 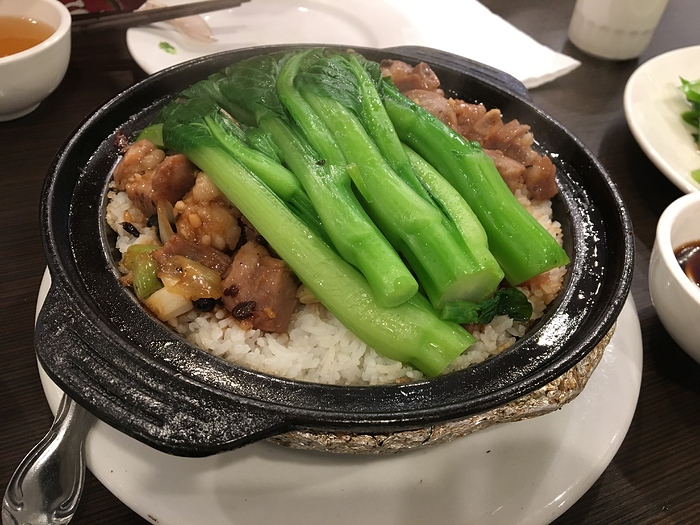 Next up we got the black pepper sparerib clay pot rice. The veggies again were more towards the overcooked side but I thought the clay pot rice was nice. The soccarat at the bottom wasn’t charred and burnt but had the nice crackly brown overtones . The spareibs had a little boney gristle, but overall it was a good combo. 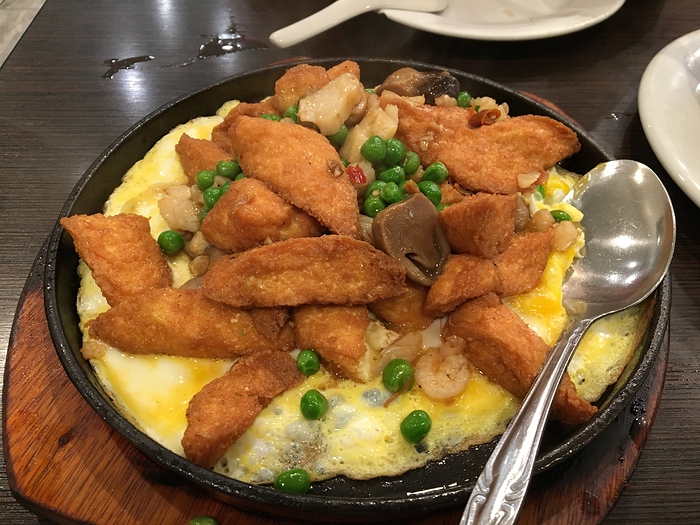 We heard sizzling platters at a large table and decided that seemed like a great idea as well (Isn’t this the Fajita effect?)! We opted for the seafood and egg tofu sizzling platter which was… uhm… interesting. I didn’t expect to see an actual egg layer on this dish, and initially the egg was nicely cooked, but the heat from the cast iron plate continued to cook through the egg making it more rubbery than desired. I’m not certain about the peas but they do add a little more texture, but the seafood (little shrimp and bits of scallop) was a little anemic. The dish was mostly egg tofu which was good just… I expected more seafood than tofu. 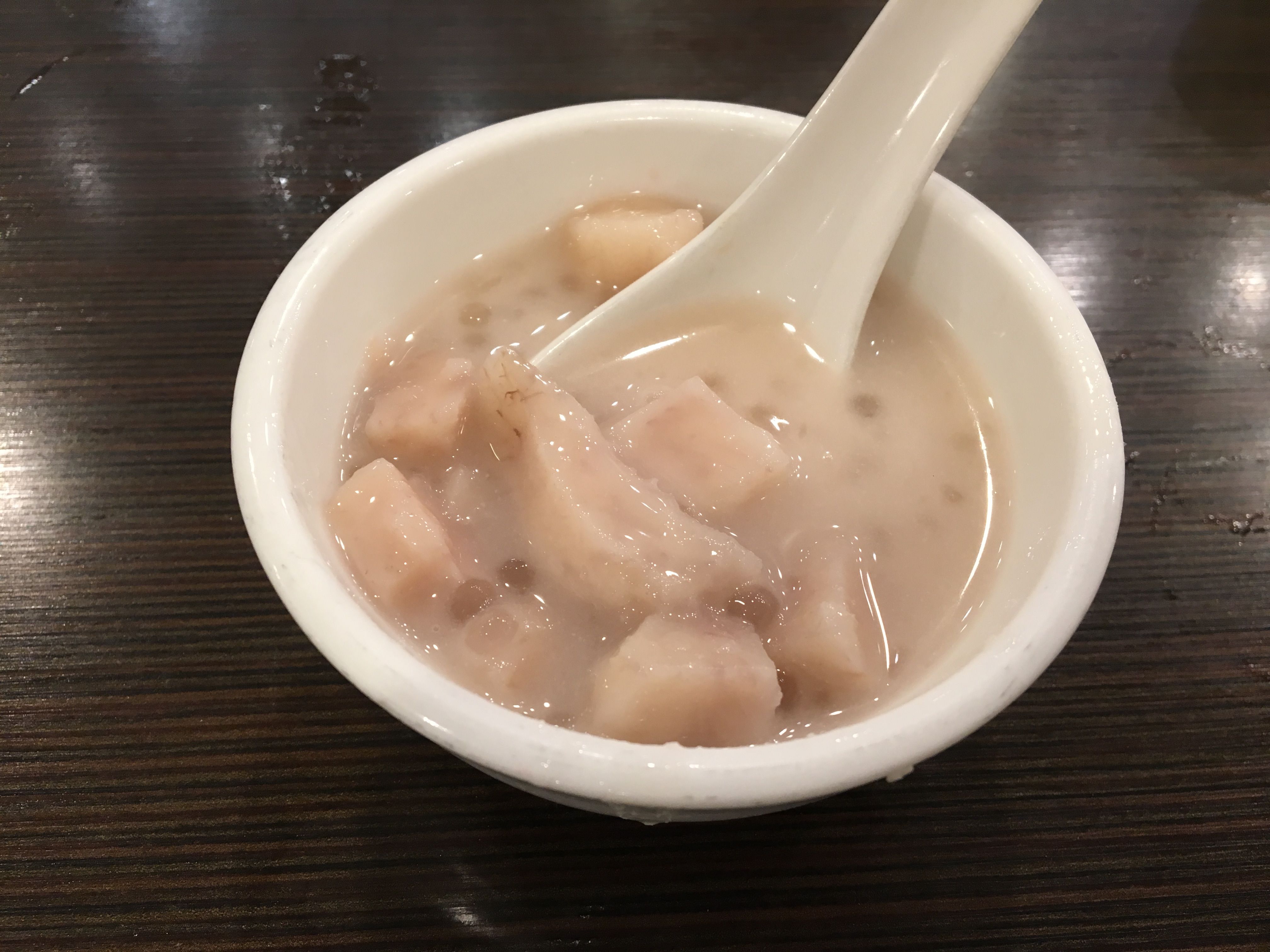 To end our meal, the complimentary soup was taro and small sago.

Overall, I am always happy with the double boiled soup here and enjoyed the nice crispy soccarat for their clay pot rice. I’m rather dreading how their veggie dishes are turning out, and I’m a little dismayed at the sizzling seafood platter. I’ll probably hold back from coming for a while unless I bring a big enough soup container to grab the soup to go…

It’s been a while since we went to Cheung Hing in Milbrae so thought to check it out again. 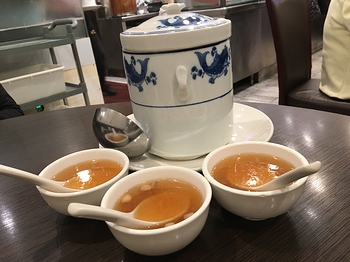 I really don’t think they have any other double boiled soup variety lol, but its still the sea coconut variant with scallops and lots of pork and chicken. Quite nice. 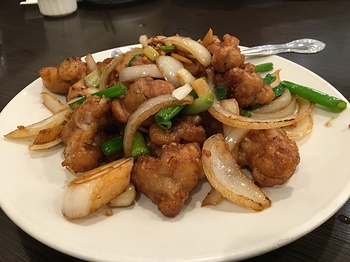 Got the onion and scallion fried frogs. The frog meat appears to be fried rather than stir-fried/sauteed so a more crispy exterior. 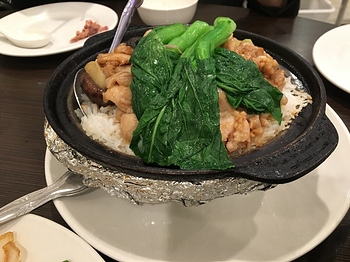 For this winter environment, we opted for the chicken and shitake mushroom claypot rice. There was a nice soccarat at the bottom though if we opted for the preserved meat one I think the rice would have been even better due to fat drippings. Only knock on this one is that its really chicken meat and not the random boned chicken parts that results in a drier chicken. 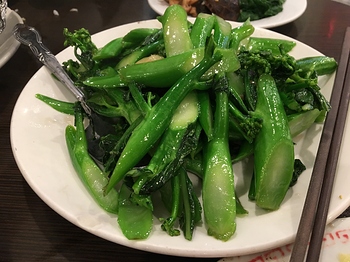 For the veggies, we got the gai-lan/Chinese brocolli with rice wine and sugar. I think they did a better job on the veggies this time, the past few times I went here the vegetables were more overcooked. 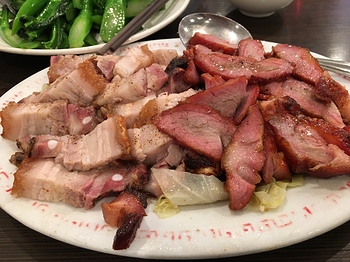 Lastly we got some of their other signature items roast pork and bbq pork! I enjoyed the roast pork over the bbq pork this time. Dunno, maybe its the cutting of the bbq pork, but I just thought it was too thin. 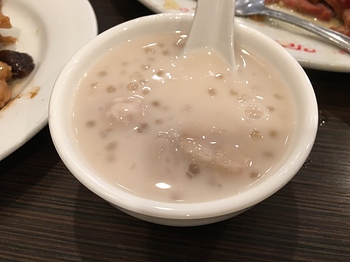 As for dessert, got some tapioca with taro soup.

Still a nice meal at Cheung Hing. Not sure what’s going on with the SSF location though. Walked by and they also offered pho?

Still a nice meal at Cheung Hing. Not sure what’s going on with the SSF location though. Walked by and they also offered pho?

Interesting! The San Mateo location now has a Shanghainese section of the menu.

I’m wondering if they’re partering up with different people. I know the one on Noriega hasn’t had any such additions.

I have just been to the Millbrae one. Is that a different one than your San Mateo one or were you referring to the same thing? I had a clay pot. Very large size and reasonable price. I thought it is a little too large, but over it is fine.

It’s a different one—- locations are in SF on Noriega, South SF, Millbrae, and San Mateo. Is the one on Clement in SF the same group?