My first time at Hakkasan, lunch or dinner. Since I parked two blocks from Hakkasan on the day of the New Year Parade, I figure I might as well give their dim sum a spin finally.

Long story short, most I have spent on dim sum in the Bay Area. The dim sum were all executed ok. Given the prices, most of them lacked that sparkle to set them apart from other high end dim sum places in the Bay Area, and they didn’t reach the lofty heights of top dim sums. The extra price probably pays for the scene-y decorations and the rent on Market Street.

First batches of 5 dishes, all arriving at the same time:

Scallop shumai- Its not bad. The roe on top was tastier than the scallop. So the scallop was not very additive to the ordinary shumai. As we found out throughout the meal, steamed dim was the kitchen’s weak link. Sticky rice wrapped in lotus leaves- pretty good. Measured use of soy sauce in the filling. 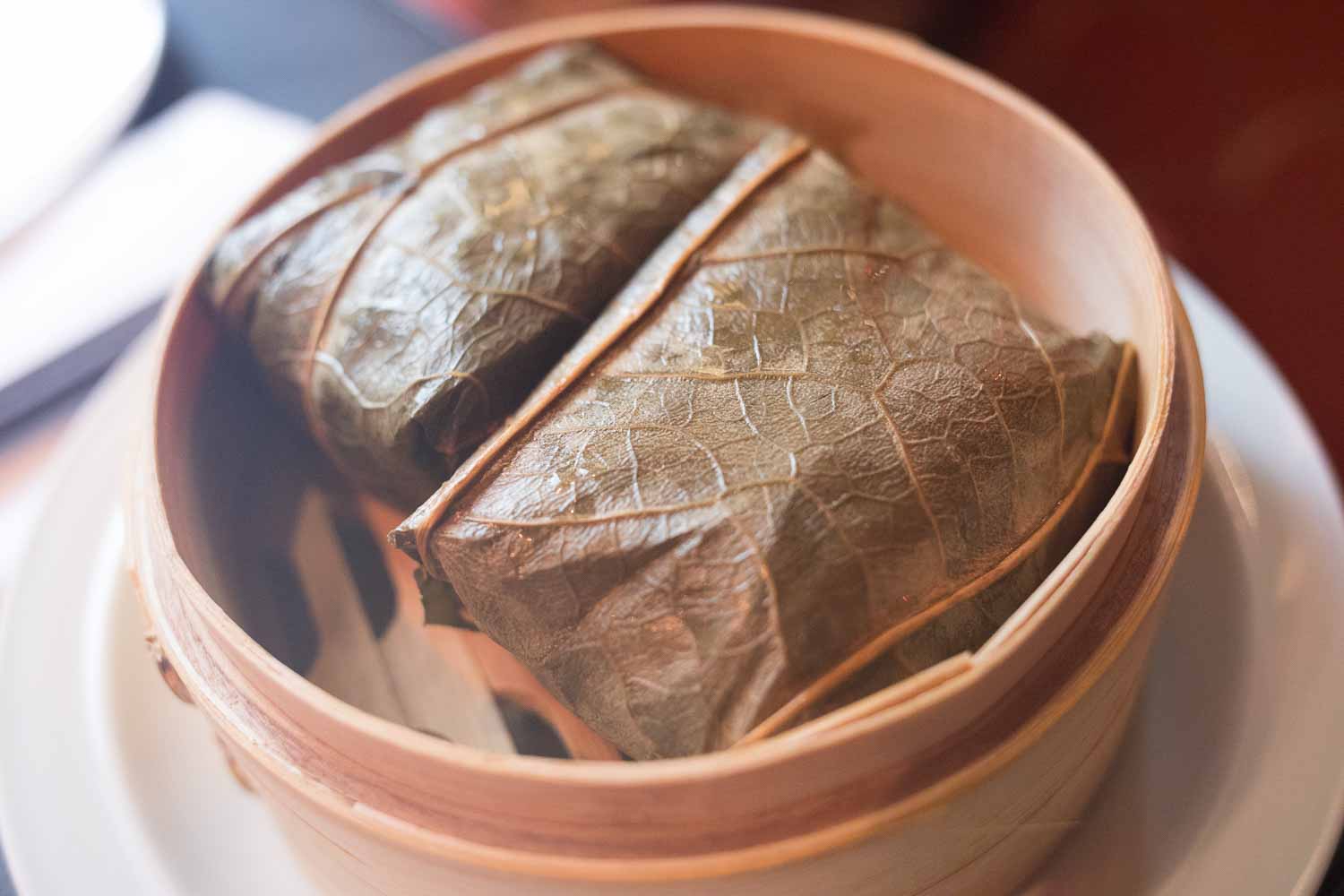 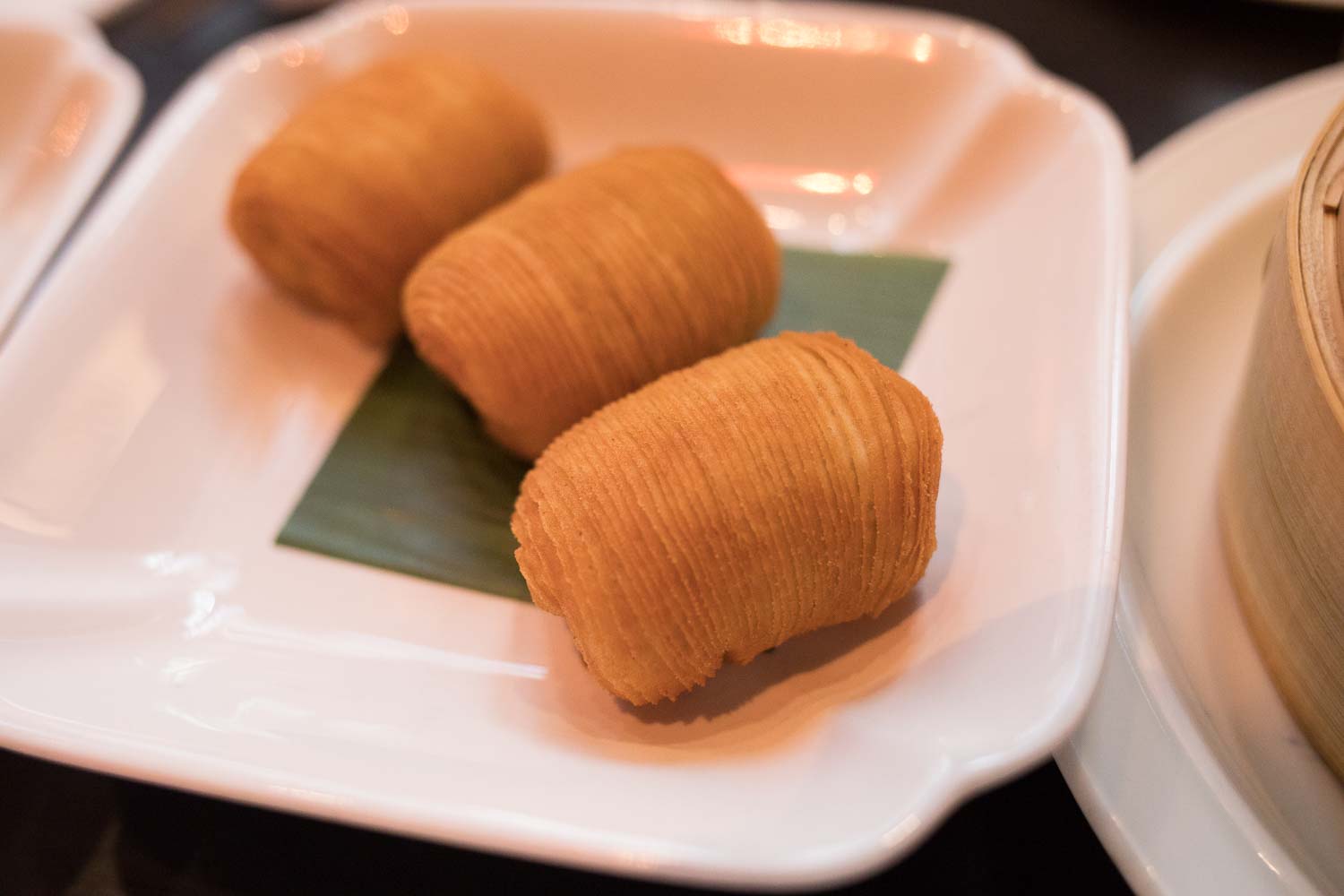 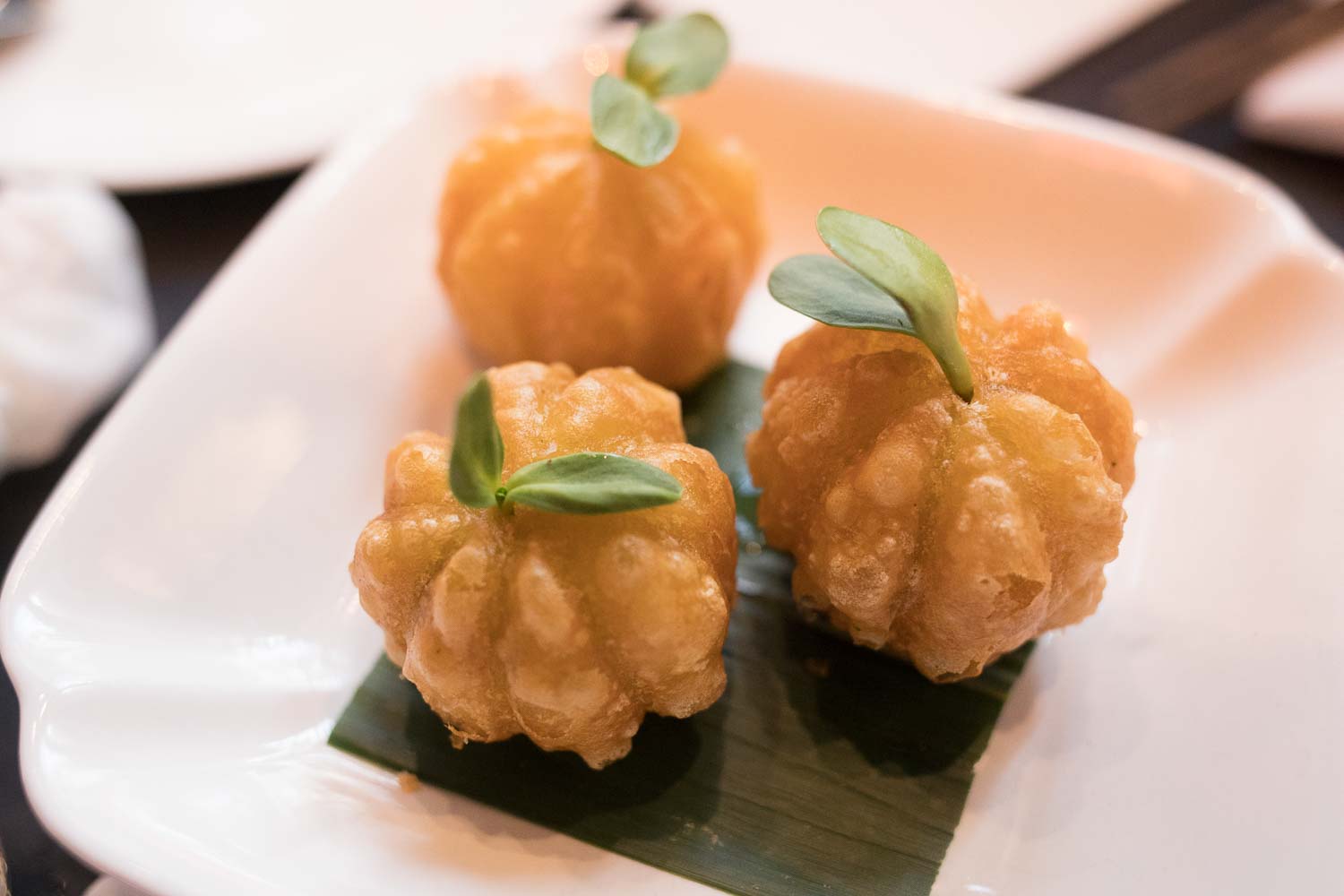 Bamboo dumpling- Unmemorable. Bland and didn’t taste of much of anything. 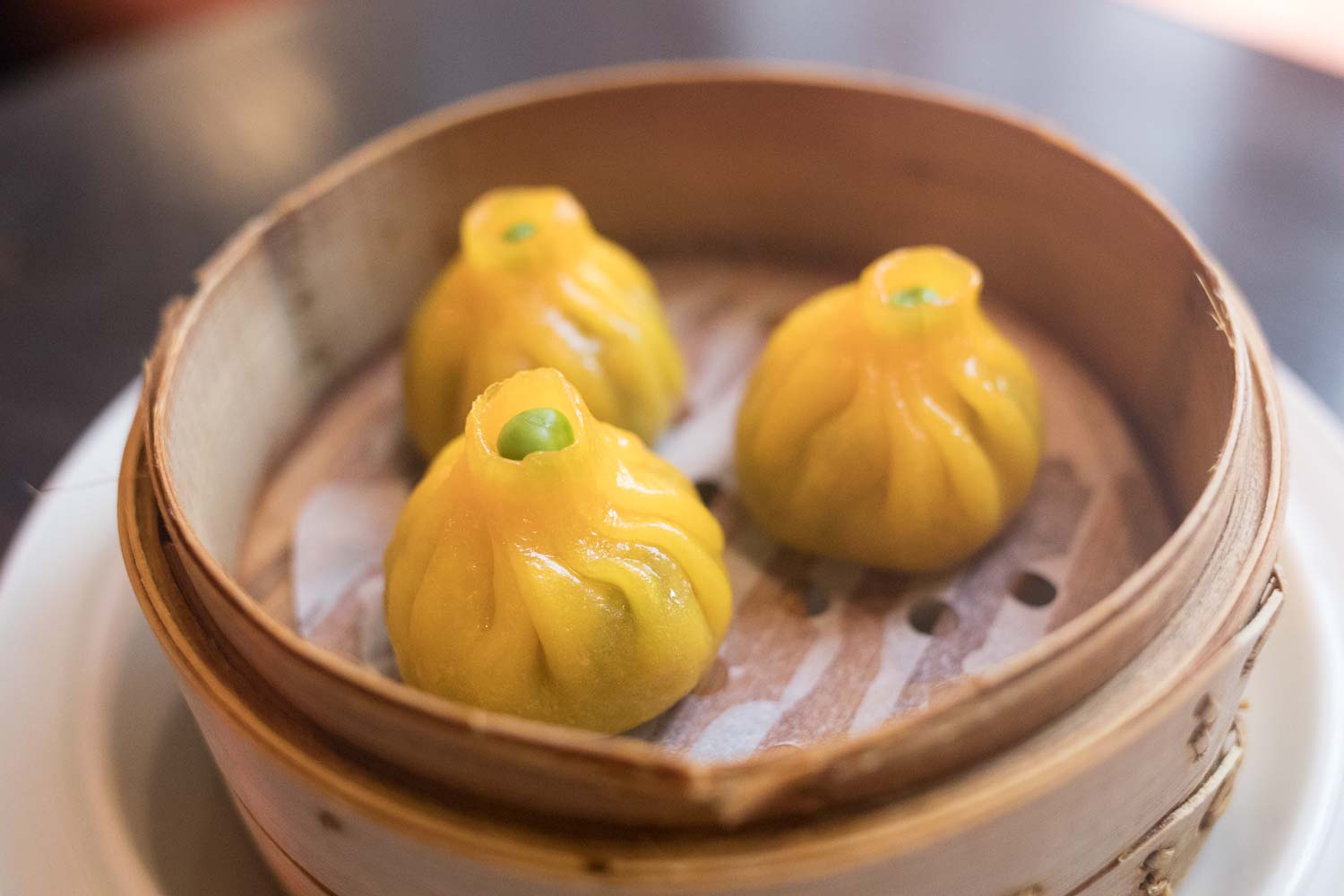 Daikon puff- Unmemorable. Also bland and didn’t taste of much of anything. Should have gotten a second serving of the XO scallop puff. 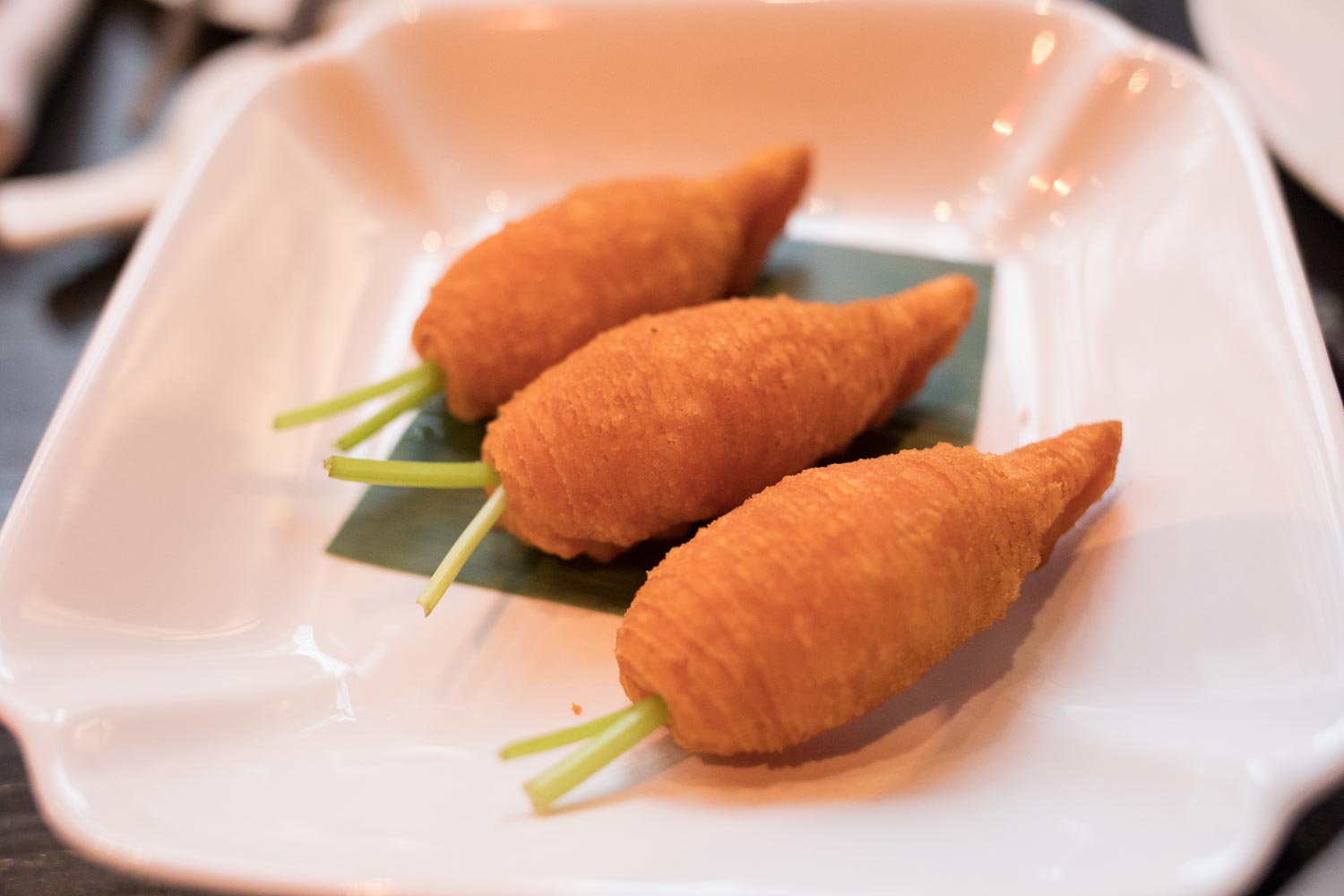 Prawn dumpling. The sauce was not my thing but the fried dumpling itself was fine with nice shrimp filling. Looked more dramatic than it tasted. 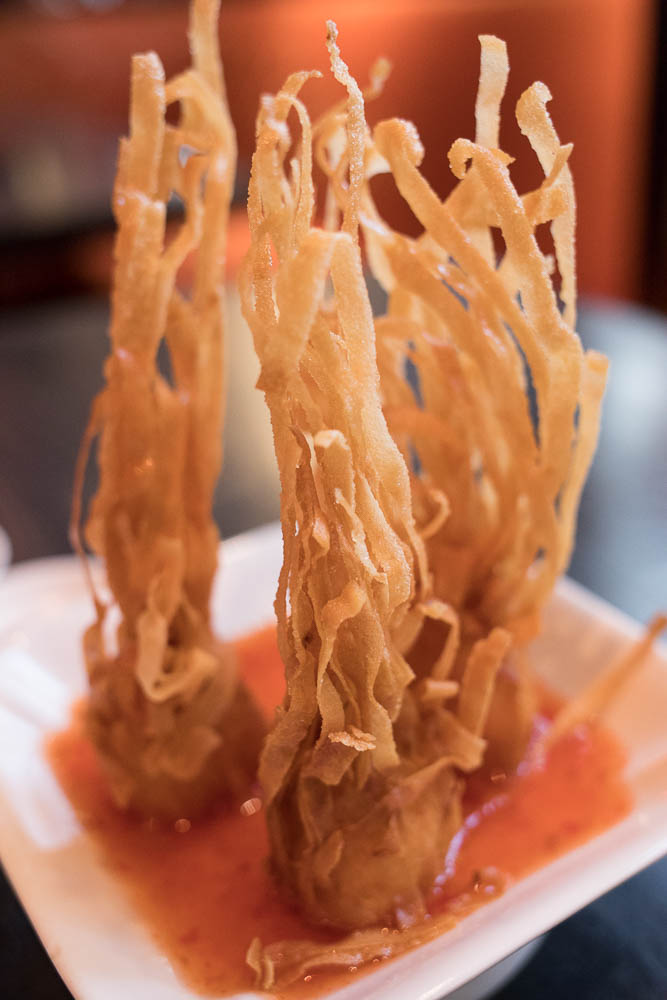 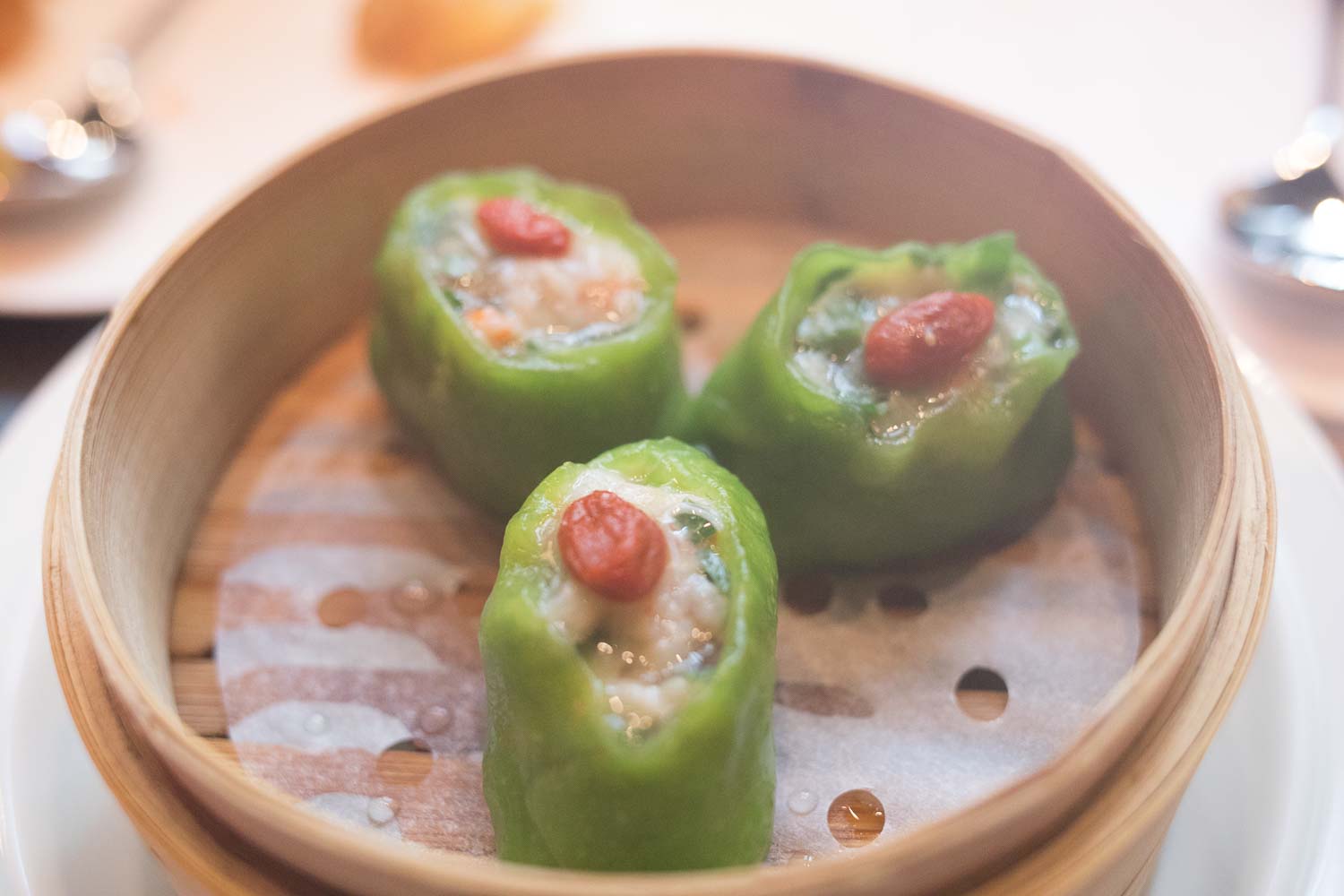 Sauces. The one on the right with dried little shrimp was better. That said, why not just give me XO sauce? 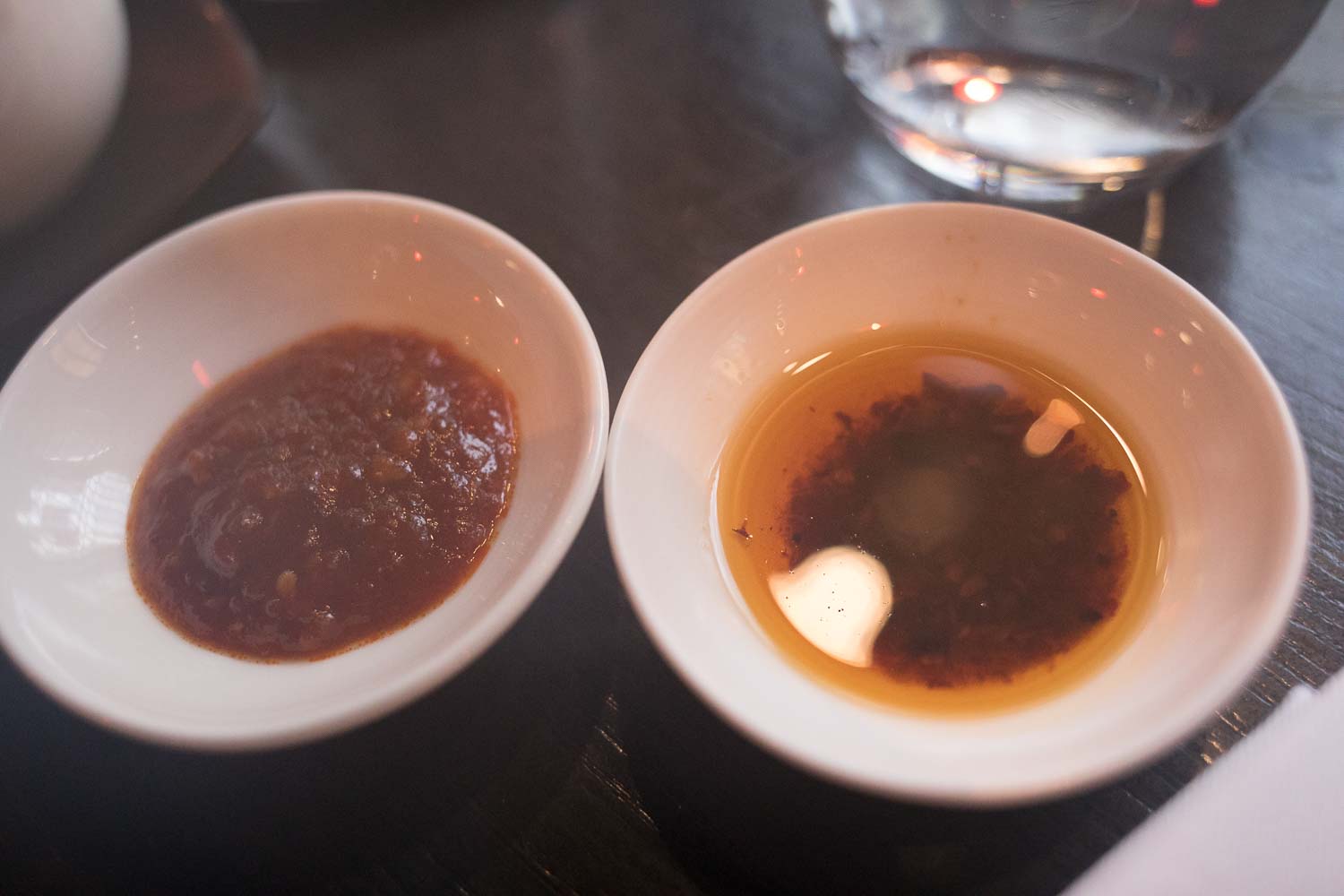 Overall, an okay dim sum meal setting price aside. But somewhat average dim sum meal for what we ordered relatively to the price. Not strictly Cantonese dim sums on the menu for those who are looking for the classics.

I brought up that the first 5 dishes all arrived at the same time, because I believe they were going for the Western style of bringing every dish to the table at the same time, versus the typical Cantonese dim sum way of bringing dishes as they are ready. The problem was, our steamed dishes in the first batch probably had been sitting at the pass longer than necessary, and the temperature was lower than preferred by the time it got to us. Coordinating the cooking time 5 dim sum dishes is very difficult, in my opinion. The steamed dishes in the second batches of 3 dishes came hotter, likely because coordinating 3 dishes was easier. 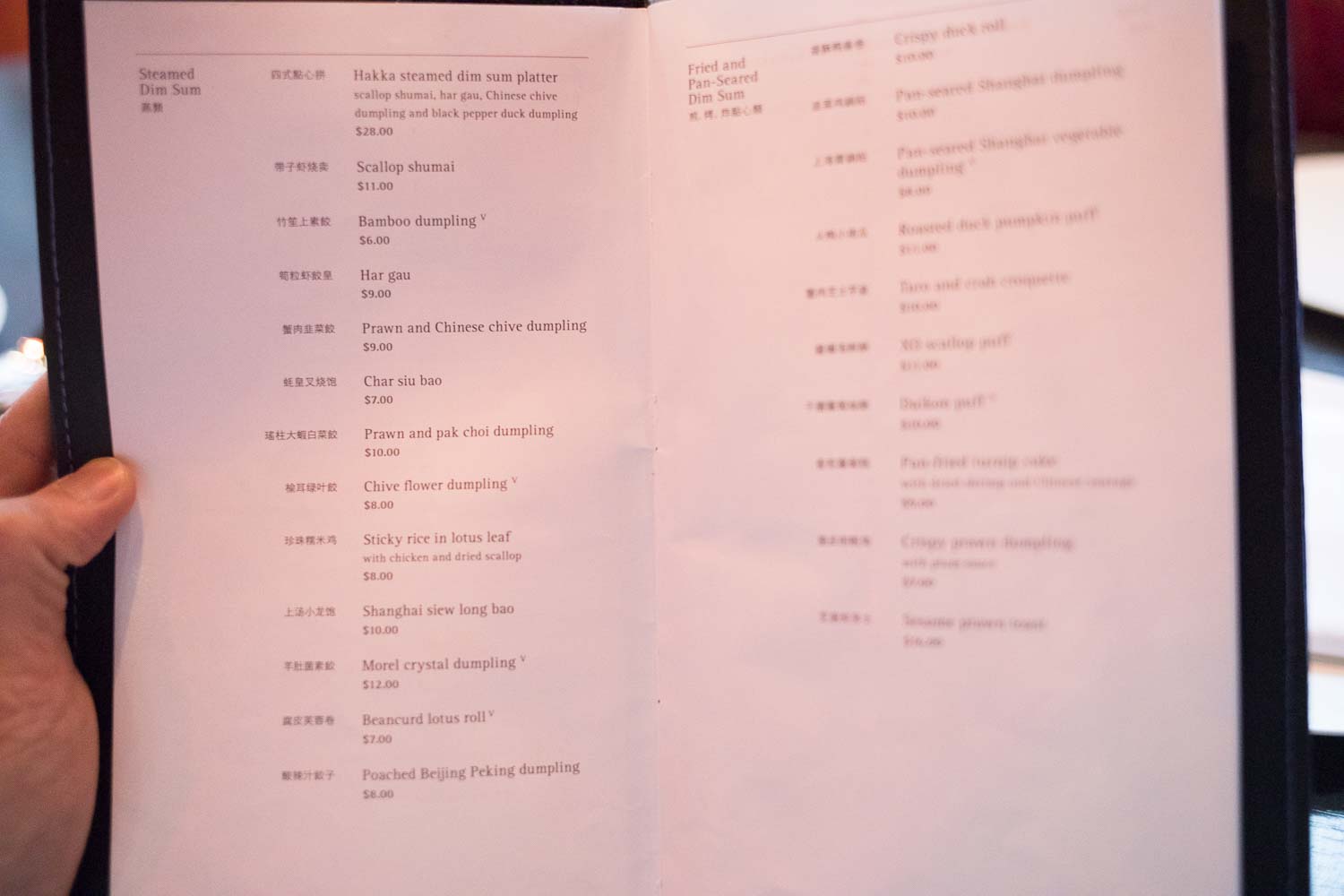 Fancy, but poorly designed table with legs that got in the way. Come on, Hakkasan… 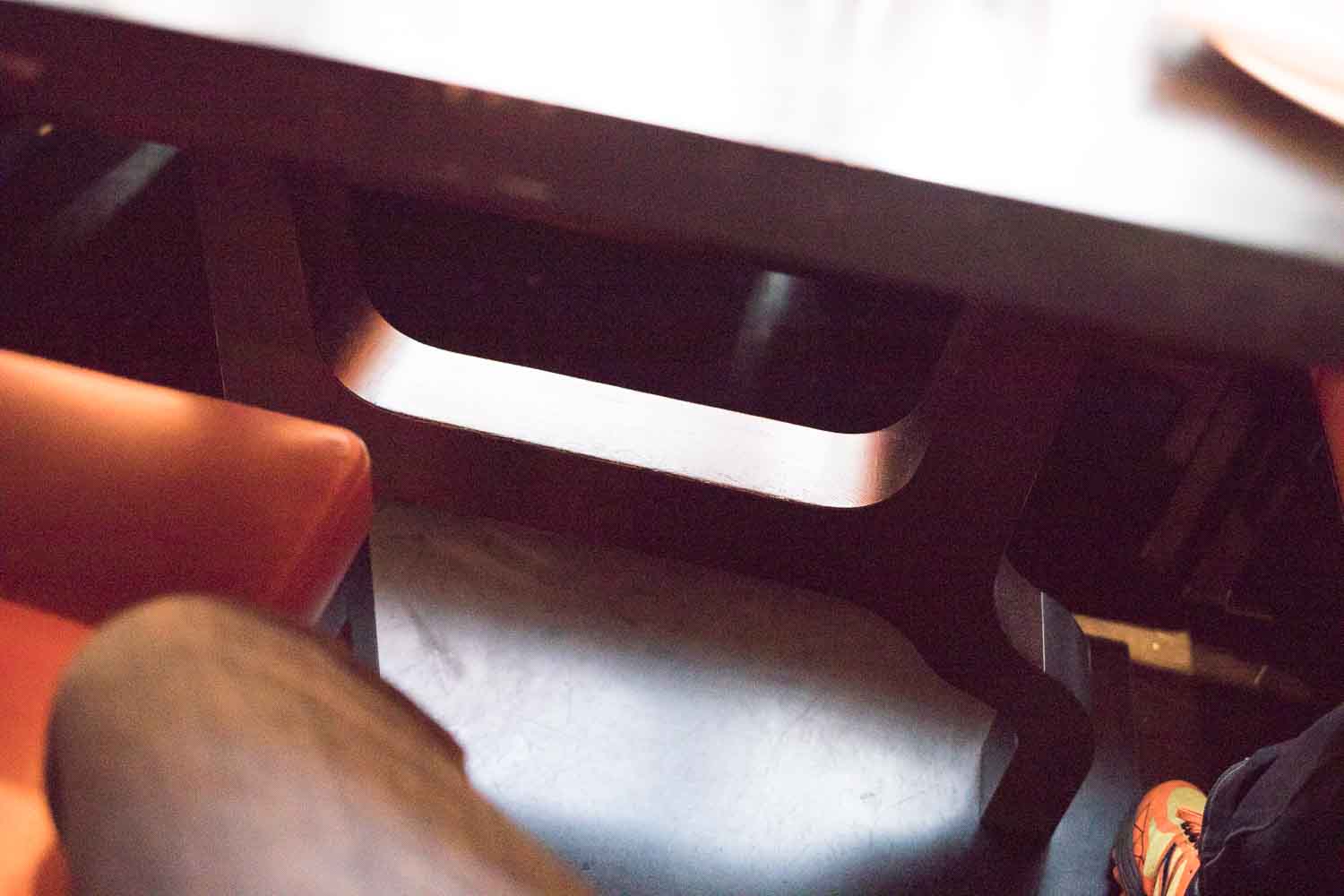 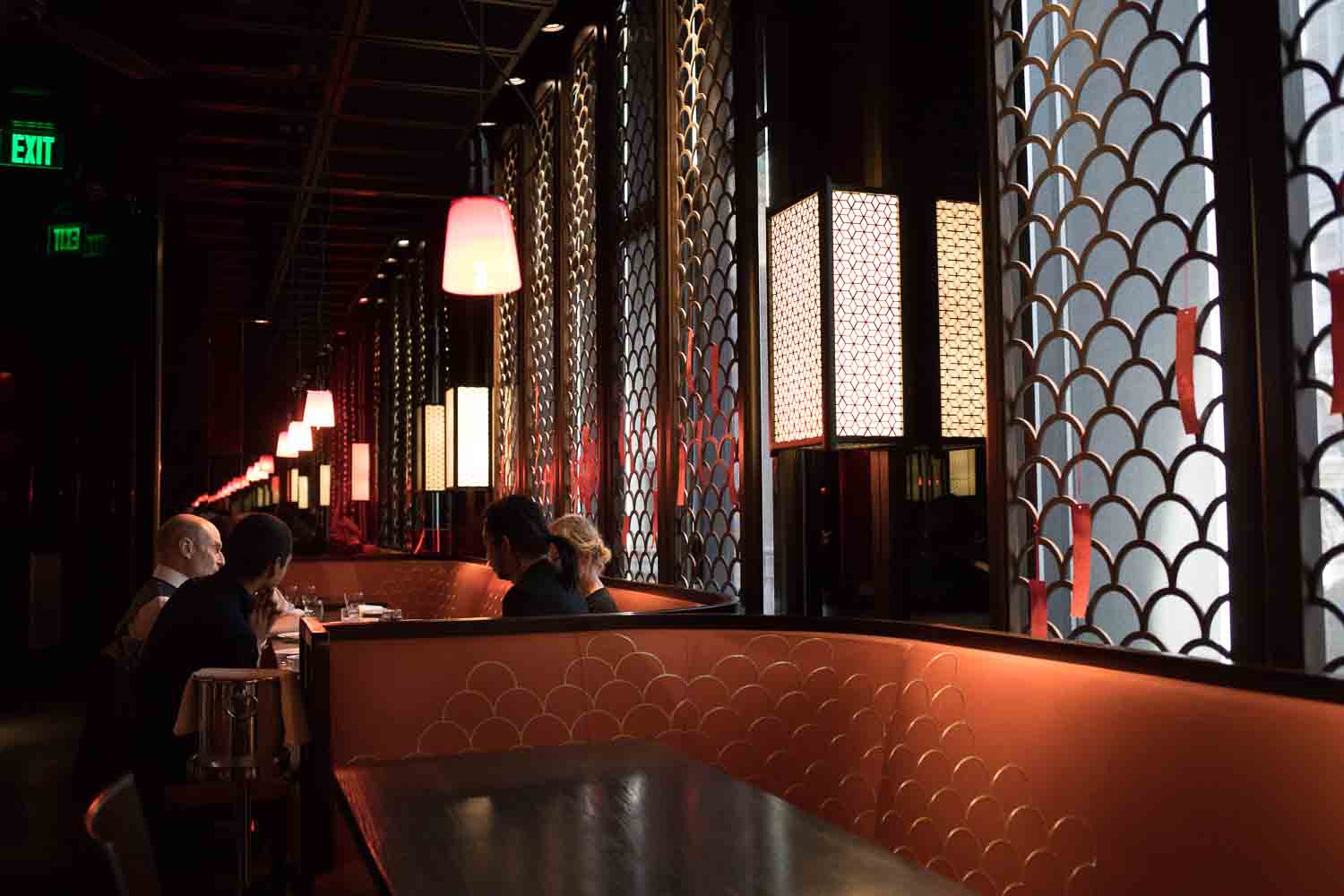 My favorite things there are the desserts, like the chocolate filled tang yuan in a sweet soup with finger lime.

Huh, interesting article. I recall this one from 99 percent invisible: 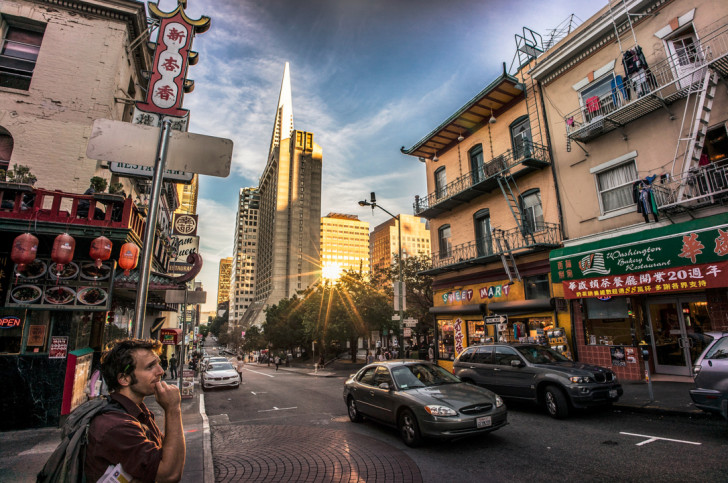 For Americans, the sight of pagoda roofs and dragon gates means that you are in Chinatown. Whether in San Francisco, New York, Los Angeles, or Las Vegas, the chinoiserie look is distinctive. But for those just arriving from China, the Chinatown...

about how SF’s Chinatown gradually got rebuilt with certain stereotypes that are now in mind that is greatly different than actual cities in China. I wonder if that thought process kinda causes a divide in how we perceive Chinese restaurants.

LOL. ‘The sleek darkness of the space always gives me the impression that the restaurant is trying to have sex with me.’ In SF’s case, I didn’t feel its so dark, but definitely darker than the usual brightly lit Cantonese banquet hall places. The restaurant felt like though that its designed as a soft introduction to Cantonese-Chinese food for a crowd who typically spends their money in sleek looking restaurants but not necessarily overly familiar with such food. (I haven’t been, but I guess you may be able to make a similar argument about Eight Tables.) Our servers are definitely trained to handle diners who are used to showing up at e.g. One Market, versus Koi Palace. None of our servers are the usual curt/ efficient Cantonese types. Nothing wrong with that, just different.

I’d be curious to know how their food at dinner is.

I’m sad to hear that another restaurant in SF is closing: 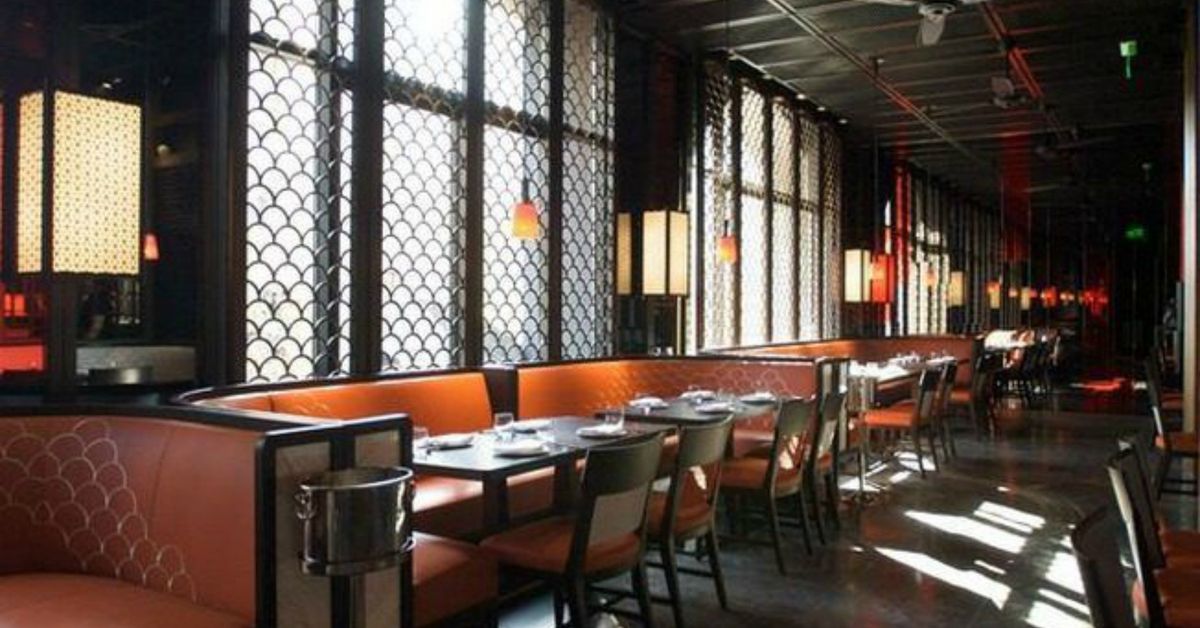 The least I can do is a quick recap of my dim sum lunch around last October. Honestly, the only reason why I gave this place a shot was I had a $20 off $100 deal… I… uhm exceeded that amount easily haha… Anywho… onward! 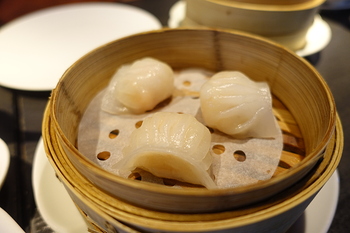 We started off with some steamed har gau. These shrimp dumplings were pretty juicy actually and the skin didn’t break though I did think they could have been just a little thinner. 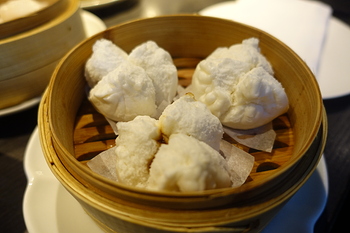 We got the traditionally steamed char siu bao. Nice and fluffy dough and sweet and savory interior. 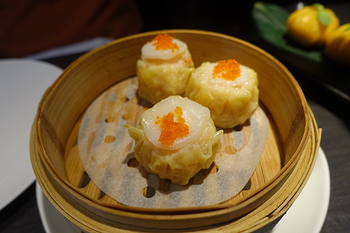 Following that, we got the scallop siu mai. I think Hakkasan does a good job on these as well though I don’t find them too different from the ones at Dragon Beaux though I think DB is actually cheaper (and well, remains open now I guess). 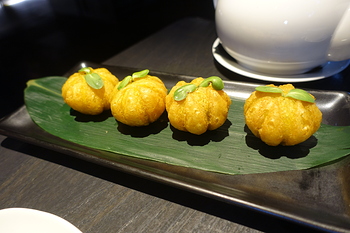 These are the adorable roast duck pumpkin puffs. Nice and crispy on the outside with some roast duck meat in the middle. I honestly couldn’t taste the pumpkin and I think its more for the color effect. The pumpkin shape is just great, reminds me of the delightful items I recall seeing in Hong Kong’s Yum Cha. 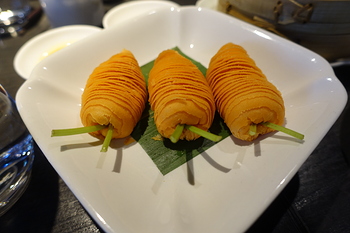 Following the plump pumpkin puffs we get these fun looking daikon puffs (though… … its shaped like a carrot but daikons are white… but…). Very crispy and flaky exterior with some shaved daikons and meat mixture in the middle. 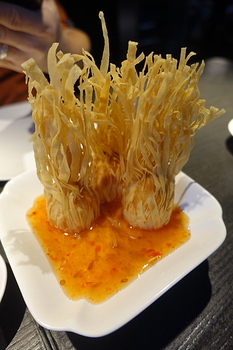 These crispy prawn dumplings remind me of those inflatable air dancers at the car dealerships… but uh… hot and crispy exterior. I suggest to eat these pretty quickly as they’re sitting in a pool of sweet and sour sauce. 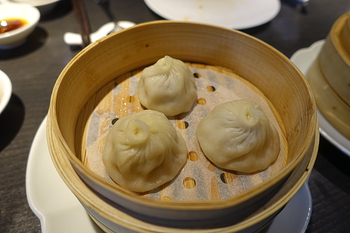 I wanted to give their XLB’s a try and I thought they tasted okay, probably the least favorite item out of everything we ordered. The middle was a little juicy but… I still think it could’ve been more juicy. The wrapper was on the thicker end as well. 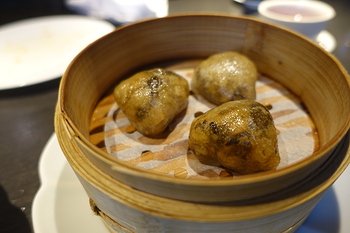 These are the morel crystal dumplings. I thought they were excellent if you love mushrooms since it has a strong morel flavor. 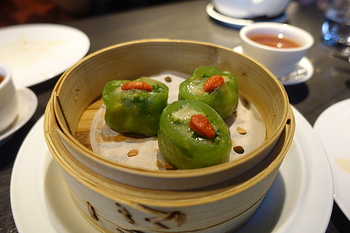 And for the final main course, we have the shrimp and chives dumpling. The goji berry added a nice sweet touch to the savory dumpling. 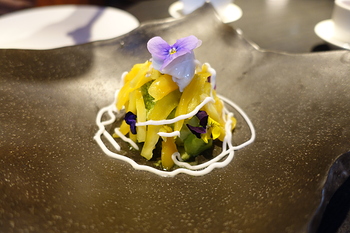 To end our meal, we got a little jackfruit sorbet thing (I… forgot to take notes… oops).

Overall, I thought everything tasted great. The main issue is probably the price. From my estimate, it cost more than the other high end dim sum dining places and I think I was gobsmacked at the way tea was served. There are no tea leaves in the pot, but rather it is brewed in the back and poured into your pot. I think we got around 9 cups of tea from that one pot and that was pretty much it. You’re charged per pot, but one of the servers was probably taken back by my cringe at that answer they refilled it on the side without further charge (I really hope that wasn’t the final straw for the place to close).

I really wonder how the future of the higher priced dining places will work though. If there are less and less business expensed lunches and dinners would these be around? Alas

We started off with some steamed har gau. These shrimp dumplings were pretty juicy actually and the skin didn’t break though I did think they could have been just a little thinner.

The problem is there is little business travelling and office workers are working remote right now, so all the expense account dining is for now going away. I can’t see higher end dining coming back any time soon either. Like Nite Yun observed, fast casual is probably the way to go for the short term.

I’m also curious what’s going to happen in Hong Kong. Wonder if there might be a second wave of emigration and if SF might be apart of the receiving end of the diaspora…

Nice as it would be to think that more HK chefs might arrive in the SFBA, with the current administration trying to shut immigration down I think it’s unlikely we’ll see many of them.

Articles in the foreign press indicate COVID-19 is complicating HK emigration. The UK has already offered to take HK residents, although the specific details of that aren’t known yet. Australia is debating the issue. Canada expects to see a good number of applications from HK wealthy (investments in business are one of the requirements now) and skilled worker visas.

Almost all middle-class HK Chinese I’ve met came through family ties (including my many in-laws), as did many SE Asians. With the elimination of that loophole, I can’t see much hope for any revivifying energy from HK into our declining food scene.

Nice as it would be to think that more HK chefs might arrive in the SFBA, with the current administration trying to shut immigration down I think it’s unlikely we’ll see many of them.

Assuming the world doesn’t implode before the end of 2020… I’m hoping November will have a wind of change haha.

But yeah, I presume a lot more movement among the Commonwealth countries if the security law and its sorts goes into effect.

I’m curious what some of the restaurants that goes back to Asia and see their culinary scenes will do. I recall reading in some articles that Koi Palace sent its chefs back a few times to pick up new trends and tricks.