I decided to check out the newishly opened H.L. Peninsula in Burlingame. This is the sister restaurant of the one found in South San Francisco: HL Peninsula (South SF)

At first glance, you’ll distinctively note that the housing of this building was from an old Spanish restaurant: 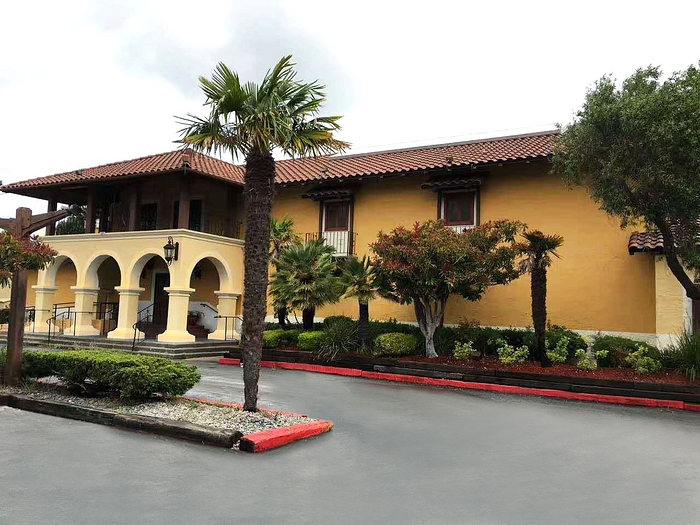 I believe that it use to be El Torito.

In any case, the place is pretty neat as it has similar (closer actually) views of SFO as planes descend. HL Peninsula is located right near [Burlingame] Grand Harbor so I’m curious how either survives. 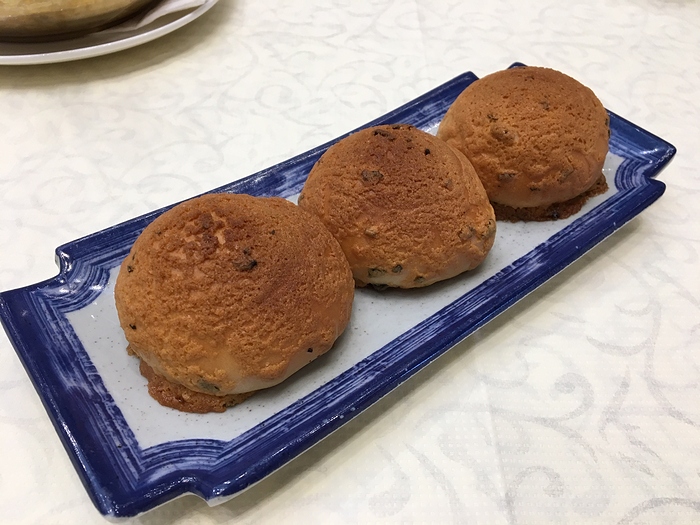 The first item that we arrived was the baked bbq pork buns. They were crispy and a little savory on the outside (you can kinda see the green onions baked into it) and the filling was a semi-warm mixture of bbq pork but the inside could definitely be hotter. 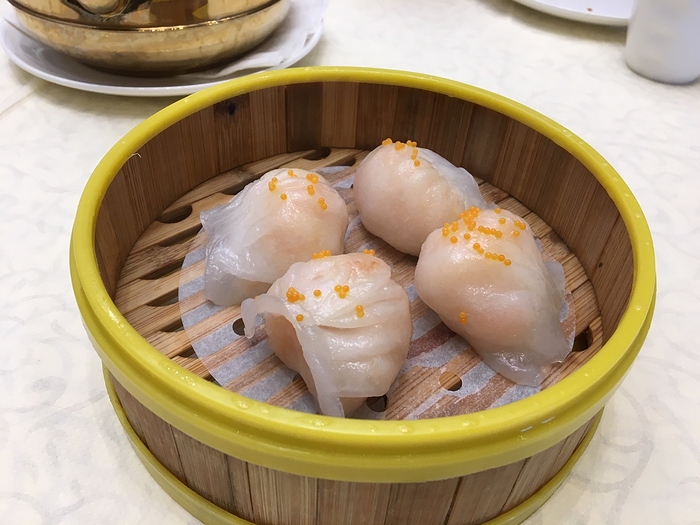 Next up is the har gao. They look… sorta nice. A few roe sprinkled on top, but the inside seemed to be oversteamed. Not very juicy 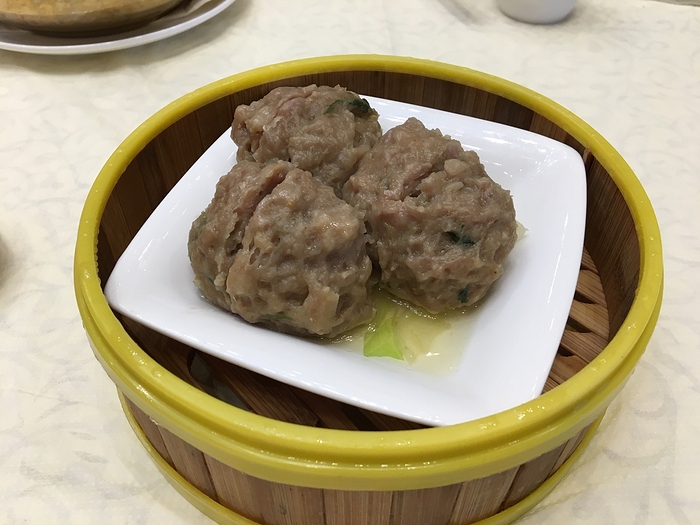 We got some beef balls next, and I found the meat to be a little too… solid. Not sure what the best way to describe it, but it didn’t seem too bouncy, just … meat. Other than that, taste wise its perfectly fine, but the texture just wasn’t quite there. 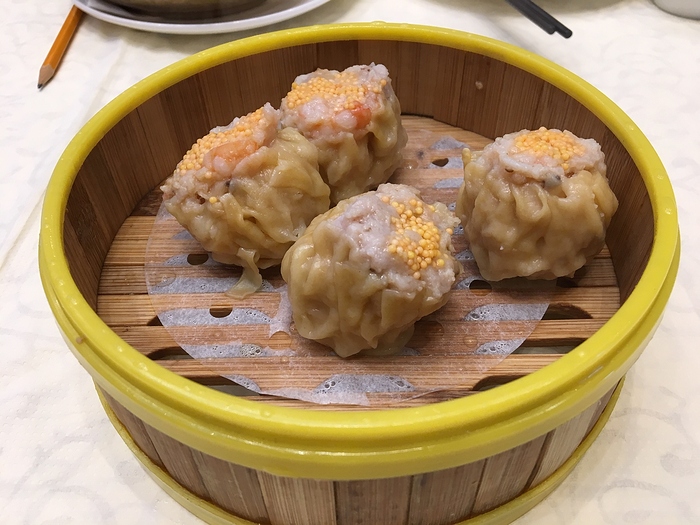 Next up was the siu mai. They were pretty good though I still think the meat seemed a little too solid. Is this from longer refridgeration? Its been a while since I reviewed the science on protein formation in chopped meats but I think that’s one of the key points. Taste wise, everything was good, just texture for me. 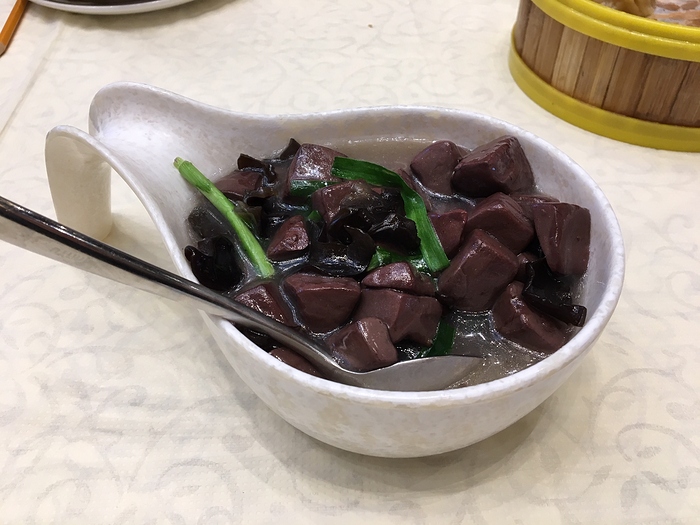 My parents wanted to try the pig blood and chives dish and they thought it was okay. I’m not a huge fan and just tried a bite. Texture wise, the pig’s blood seems just fine. The sauce was good, just nothing really stood out from it. 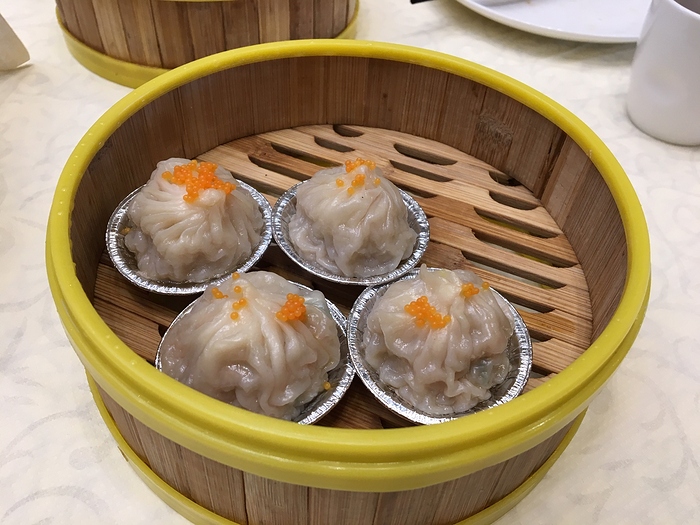 Just wanted to see how the XLBs tasted and taste wise…they seemed okay. As before with some of the other meat items, the texture seems a little more on the solid end. 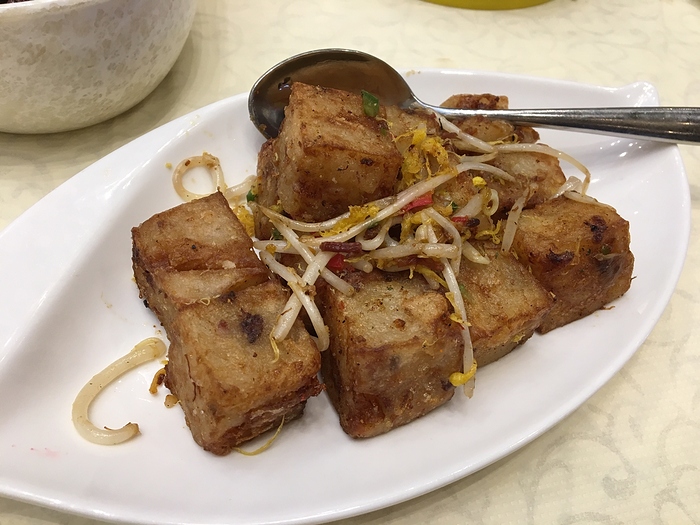 Next up is the XO deep fried turnip cubes. I really liked the additions of the bean sprouts as they give a nice crisp sweetness to the dish. The turnips were crispy with a slight crunch on the outside while being nice and soft in the inside. Coupled with the XO sauce (on the spicier end), the dish was nicely done. 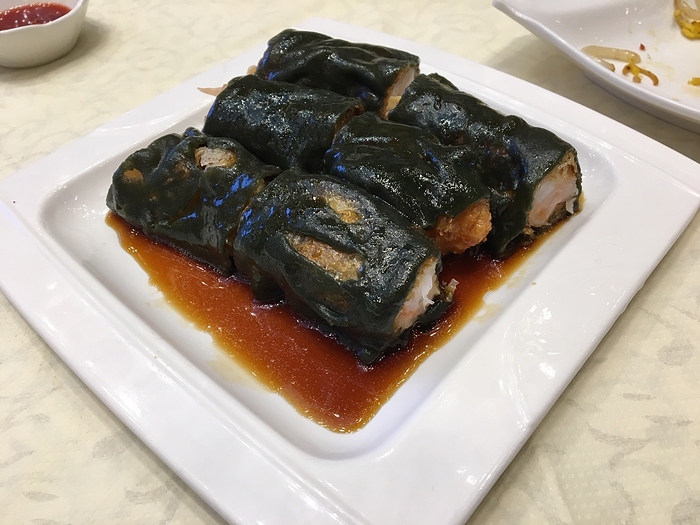 This dish here is the wormwood shrimp rice noodle roll. Honestly, it… doesn’t look that appetizing haha. The shrimp inside was deep fried giving a nice juicy crispness to the softer rice noodle roll. I couldn’t really taste that much of the wormwood, but it gives it an intensely dark color. 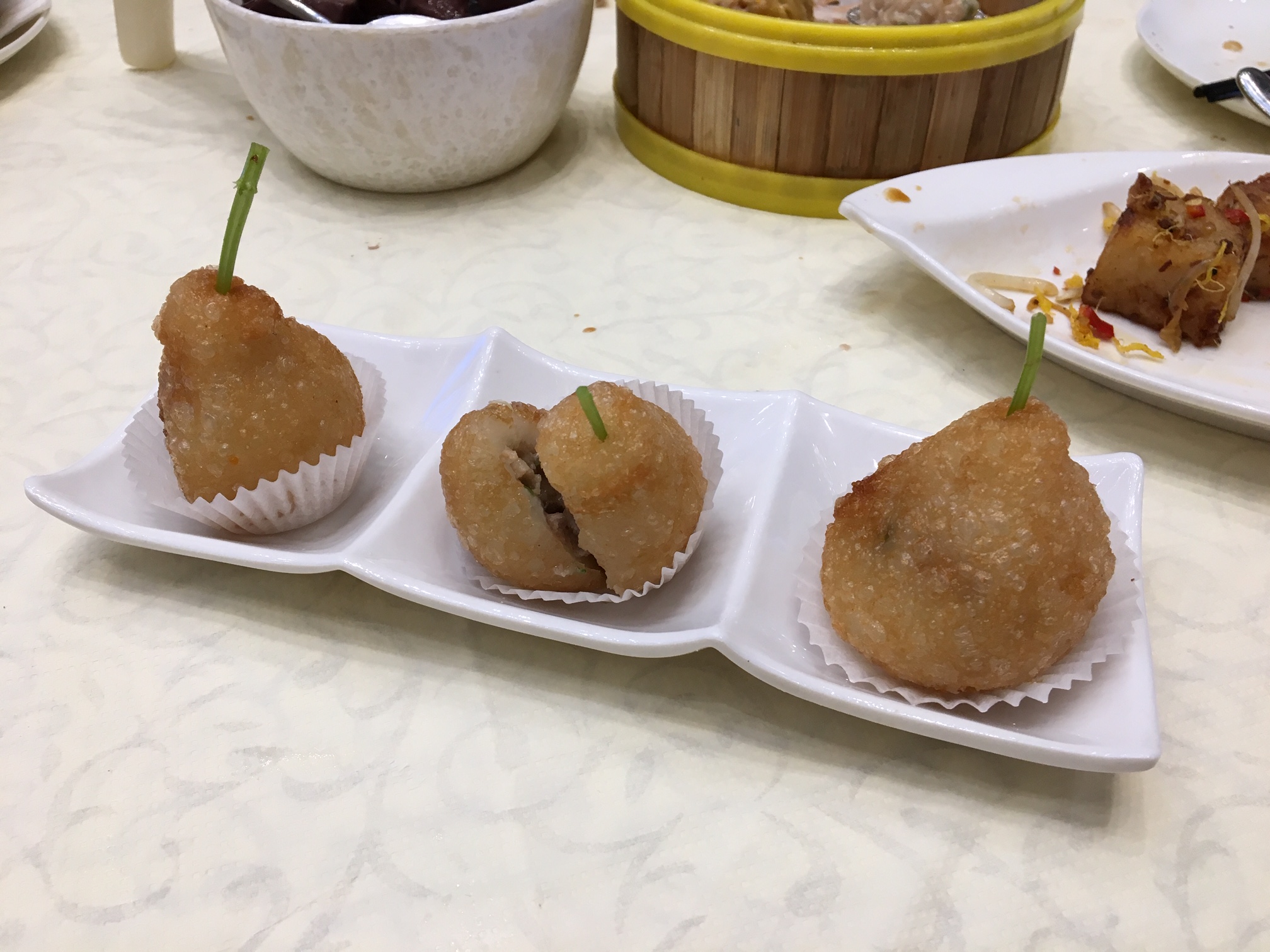 This here is their fried sticky rice pork dumpling shaped as a pear. I thought they did a fairly good job on the filling, but wish the skin was a little thinner. 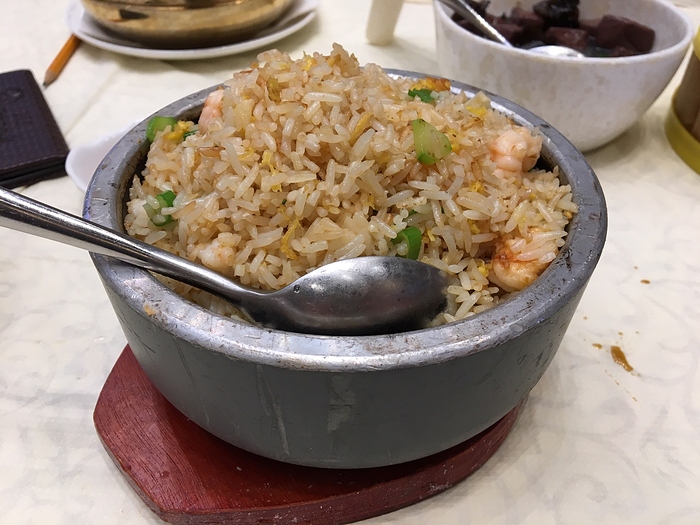 Lastly, we were curious about the stone pot seafood fried rice. Turns out it is fried rice placed in a hot dolsot. The rice has a somewhat nice soccarat as it continues to uh crisp up in the dolsot; however, since its already cooked and then further heated up with the dolsot the rice gets a little on the dry end towards a second serving.

In any case, H.L. Peninsula at Burlingame is pretty much like the H.L. Peninsula at South San Francisco. Prices aren’t low, and food quality seemed good but not stellar. I’m hesitant to really say anything since they’re just newly opened and probably working out kinks, but at the same time, this isn’t their first branch. Dunno, further eating is required.

Great photos. Terrific observations. Thank you for your report.

Thanks for the report! What’s that brown color on the baked bbq bun?

I guess they really like their meat solid then.

Had no idea that the artemesia outside is edible! I wonder which part of the plant the black color comes from.

What’s the deal with those pear shaped sticky rice dumplings. Grand Palace (on Grand in SSF) also has these, and also had dense dry dim sum. I am getting the impression that a lot of these places are getting there food from a central kitchen somewhere and reheating it on site.
Anyone know if that might be true?

What’s that brown color on the baked bbq bun?

It was sweet and savory, reminded me more of an over baked Mexican bun haha.

Had no idea that the artemesia outside is edible! I wonder which part of the plant the black color comes from.

I never knew that the plant could be eaten like that actually. Though it really didn’t give that much flavor, more of a color imo.

Mmm… haven’t compared this Peninsula’s dinner yet, but I will say either places dim sum is still good. Just I expect an extra oomph at their price point (there’s still some odd things on the menu that’s somewhat novel). In regards to amount of people, H.L. was getting crowded when I left . I tend to arrive shortly after it opened since I don’t quite like standing in line (gah, do I really fit into SF?!). I haven’t checked on Grand Harbor recently so no idea on that.

What’s the deal with those pear shaped sticky rice dumplings. Grand Palace (on Grand in SSF) also has these, and also had dense dry dim sum.

Huh, I just thought the pear shapes were cute. I wouldn’t be surprised if there was a central kitchen for dim sum. On HL’s website: http://www.hlpeninsula.com/ they show a picture of their Guangzhou factory: 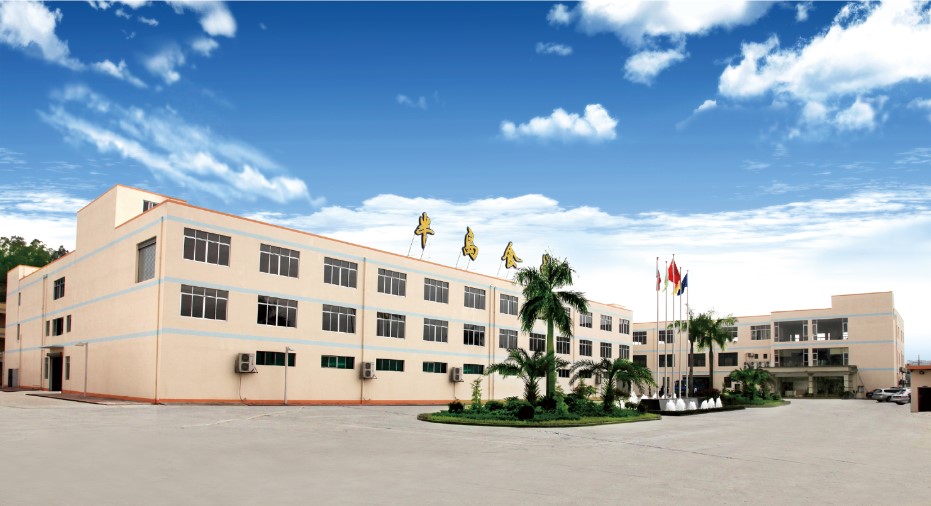