Hey everyone just had a pretty nice meal at Dragon Beaux for lunch over the fleet week/Columbus day weekend. As some are aware, Dragon Beaux is affiliated with Koi Palace though there is a slight difference in approach. I consider KP to be more of a traditional dim sum parlor while DB tries to go for a more modern twist. There are definitely some unique dishes that I have not seen elsewhere in the bay area.

Anyways, I’m still unsure if you can actually call for reservations, but definitely get there roughly when it opens and you should be fine. 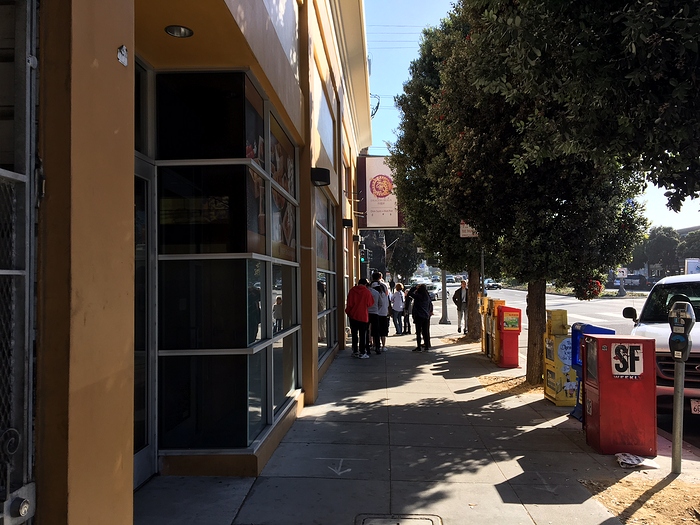 2/3 of the line already inside the restaurant right when it opened… eesh. Note, parking can be a pain as well. 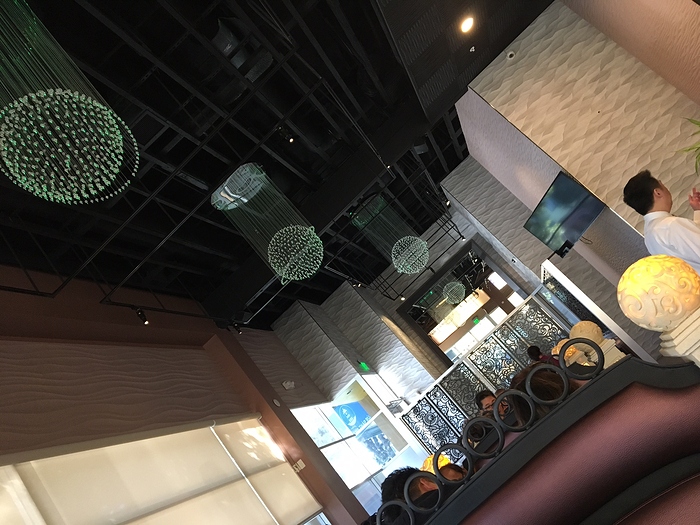 I find DB’s decorations to be… eclectic at the least, but the tables and such are still very clean. Note, the dining section is partitioned off in roughly 3 areas; larger tables are available and in the other areas, but size wise it still would not compare to Koi. 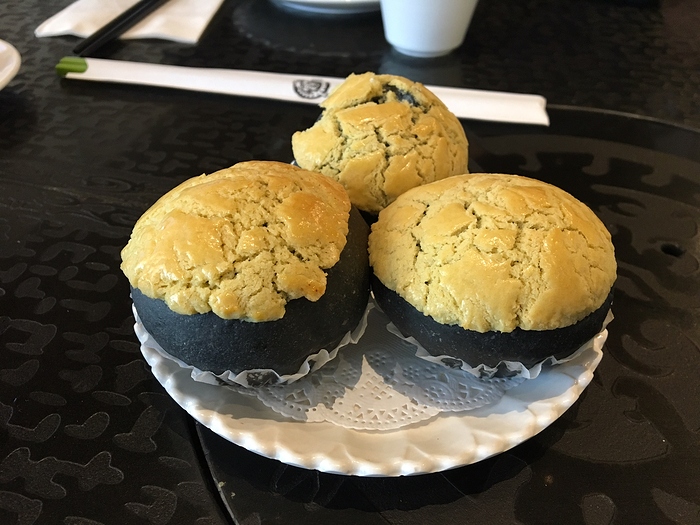 Launching off our meal, we saw these intriguing looking buns. Turns out they were the baked charcoal curry chicken baos! A slightly sweet and crunchy top (a la pineapple bun) mixed nicely with the curry chicken. 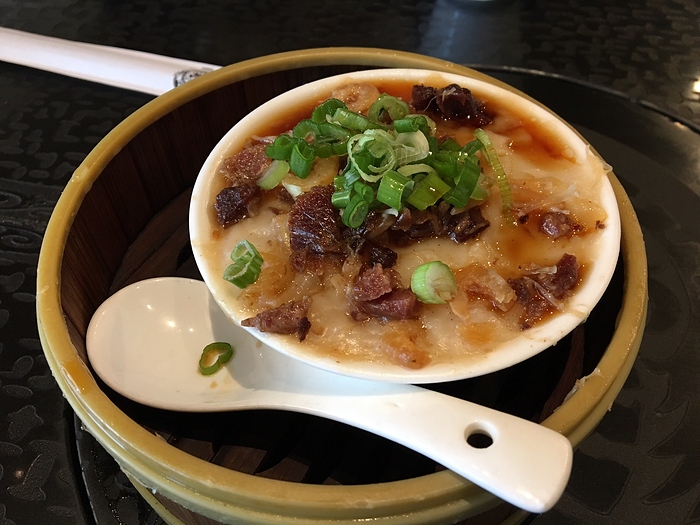 Following that, our steamed daikon custard arrived and I personally thought they did a fantastic job. They also had the XO stir fry version but for today the steamed version was picked and had a nice texture throughout. A mix of the sweet radish julienned with a bit of flour interspersed so it wasn’t one giant puck of softness. 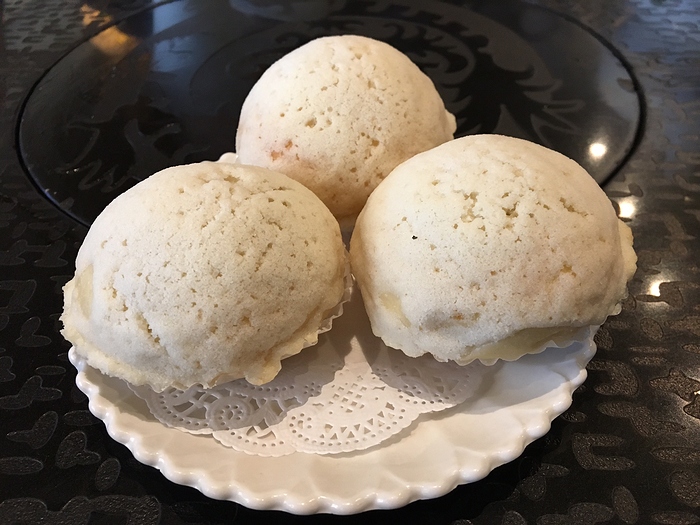 Next, we got the snow mountain baked bbq pork buns. Not quite matching Tim Ho Wan but probably 80% of the way there. Though they were warm to the touch, I wanted that pipping hot baked goodness. In any case, quite excellent with a great filling (no random fat glob with stringy meat). 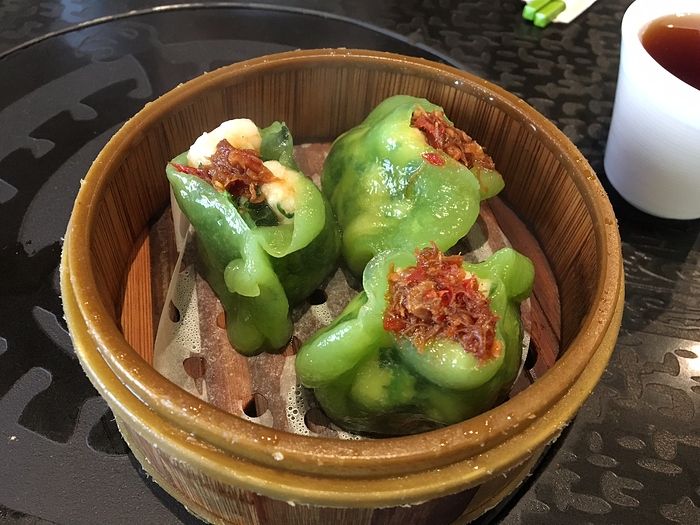 This was the XO spinach dumpling and was pretty great as well. The XO sauce is still delicious and the shrimp filling was quite juicy despite the dumplings being openly steamed. 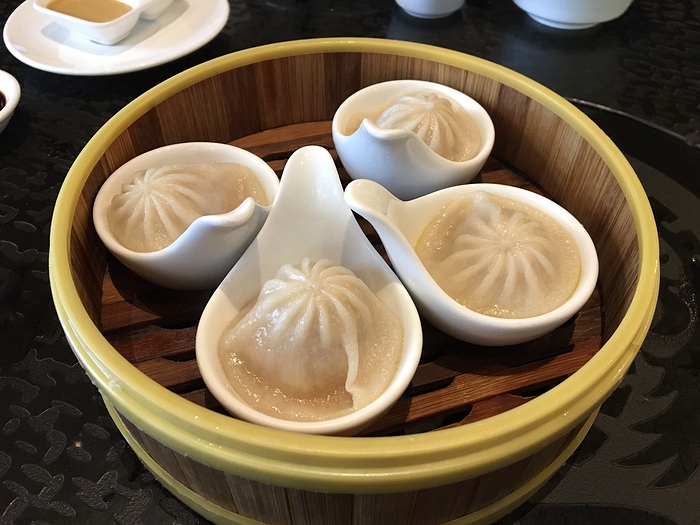 Yes yes, XLB in a Cantonese dim sum restaurant, but I still find their execution to be sufficiently delicious. Note, spoons are ridiculously hot and slippery, so wait a while. There’s a slice of carrot underneath the dumpling as well to avoid it sticking too much. Dragon Beaux also offers other variations including a five colored version but I never quite liked their flavors (reminiscent of the 8 color XLB that I’ve seen at Crystal Jade overseas) as the original. 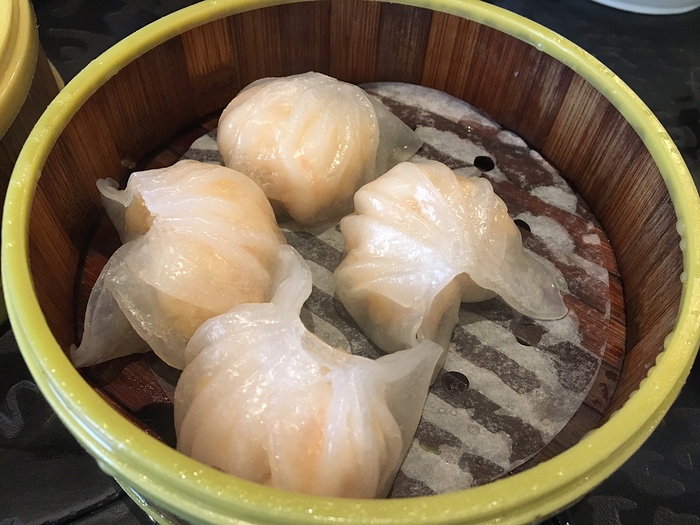 A simple classic, the shrimp dumpling had a nice translucent wrapper with juicy filling. With my fantastic chop stick skills, I’ve managed to puncture and mangle the dumpling, but everyone else was able to grab it without breaking the skin… 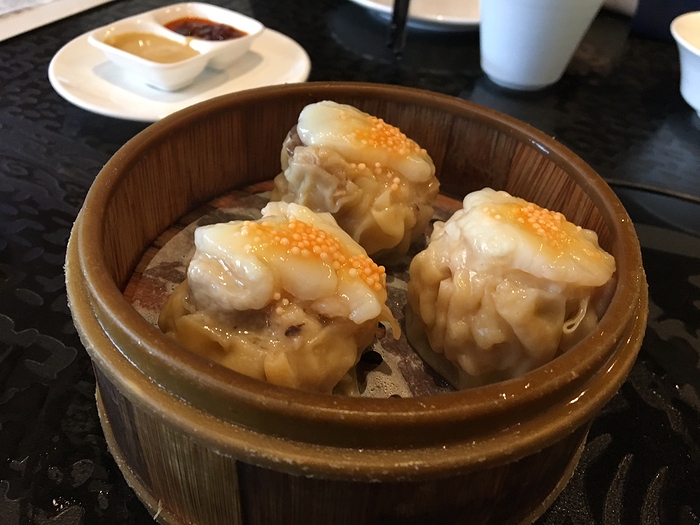 Up next, we got the jumbo scallop siu mai which was frankly quite good. Scallops were still juicy and not overcooked, pork was nicely diced and didn’t feel super solid (usually that is evident with food processors) combined with nicely sized shrimp and I couldn’t be any happier with their execution. 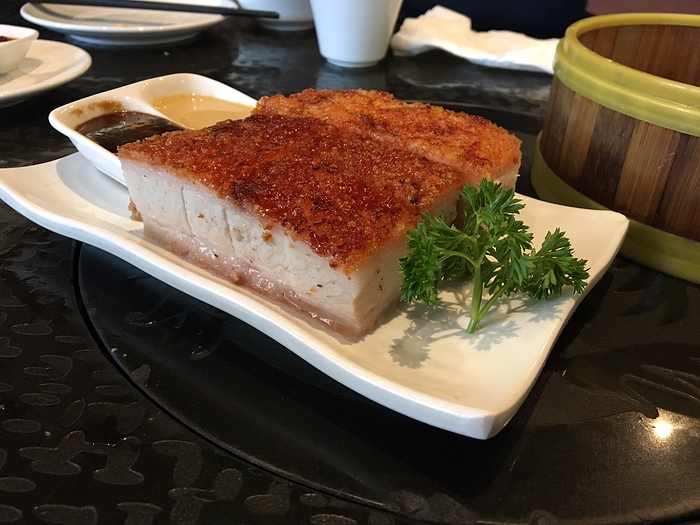 Everyone else was ordering roasties and I couldn’t help but to join in as well. Their pork belly was nicely done, with a nice crispy pork skin on top. The meat was layered but there was definite separation of the fat and the meat. So not quite in the same league as HK’s five layer goodness but for my tastes it was very good. 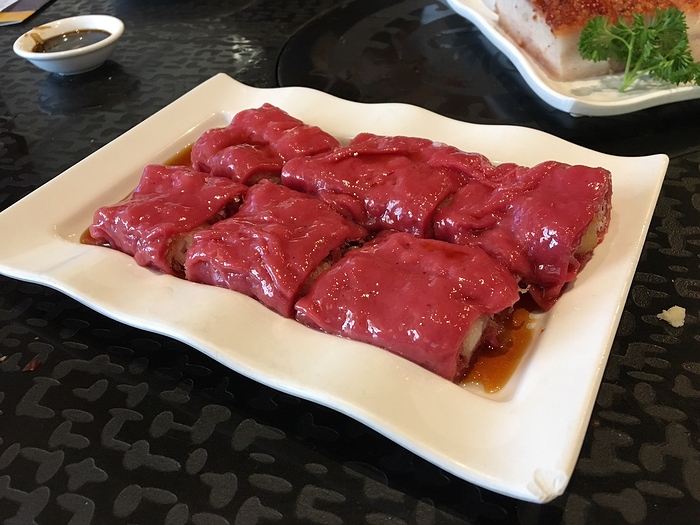 An intriguing variation on the rice roll/crepes. This was the fish chip rose red rice crepe. Within each roll, visualize a vertical separation in the roll where one side is the fish deep fried with this taro like exterior and the second half is just the crispy taro mixture. I personally prefer just a normal rice roll with shrimp, but there was nothing really intrinsically wrong with the dish. 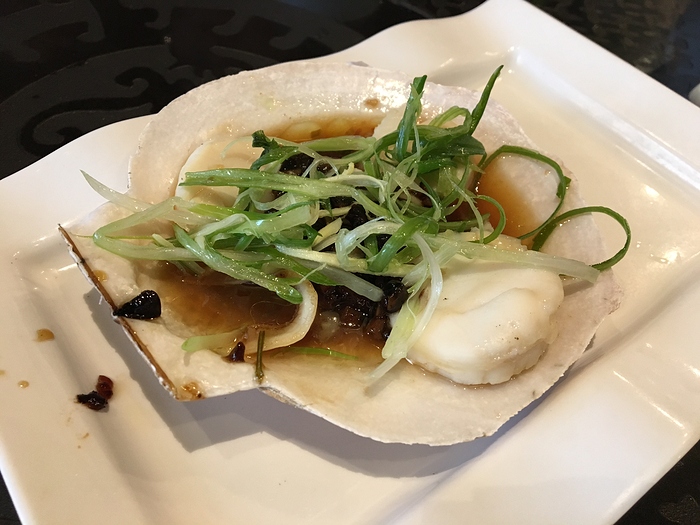 Part of the daily special, I just couldn’t help myself and tried a black bean and scallion steamed scallop. Very fresh scallop and steamed on point. 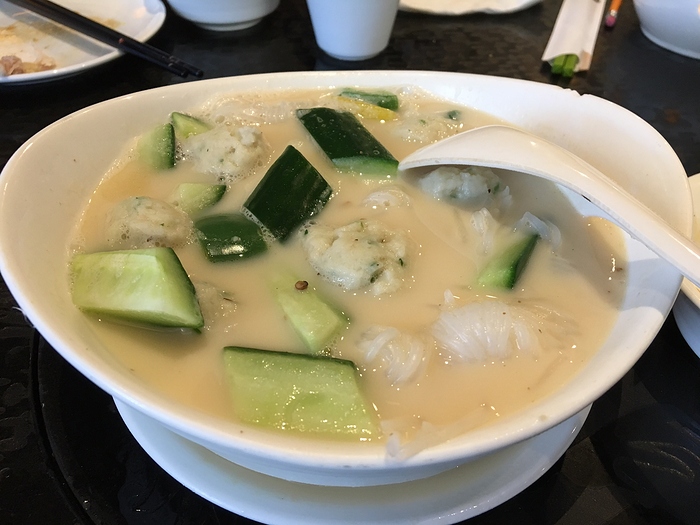 Tried out the black pepper fish paste soup and I enjoyed the broth, the fish paste, and the shirataki noodles. Not quite a huge fan of zucchini and bell peppers but that’s more of a personal thing. 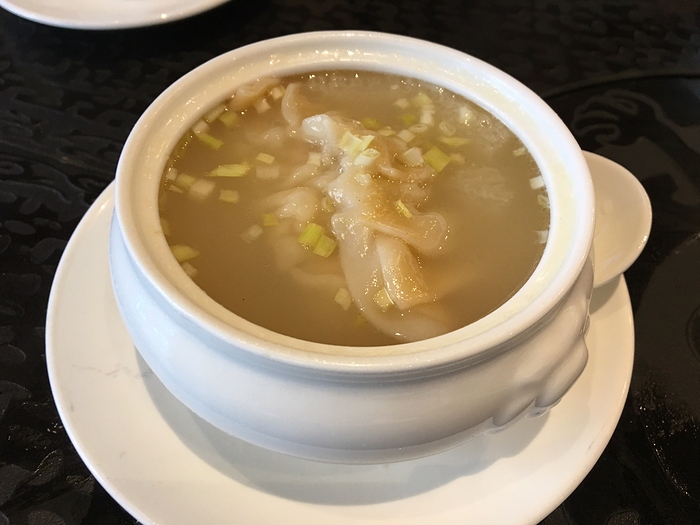 And the finisher to our meal is a personal favorite. This is the dried seafood dumpling soup. Within the dumpling was abalone, sea cucumber, fish maw, and dried scallops. With some golden chives on top and a fantastic broth, easily one of my favorite variations in the bay.

Overall, Dragon Beaux still has one of the more innovative dim sum dishes within the bay area (and probably the rest of California). Price point was on the higher end (meal was roughly around 100 dollars) but sadly approaching a normalization in the area. Quality was very good and there wasn’t really any major missteps.

I haven’t had dinner there in over two years so I cannot comment on it recently, but I do recall that their hot pot was pretty good (they also do regular dinner as well) as noted by @souperman : A Satisfying, Bargain Hotpot Meal at Dragon Beaux [San Francisco]

Turns out they were the baked charcoal curry chicken baos! A slightly sweet and crunchy top (a la pineapple bun) mixed nicely with the curry chicken.

Hmmph, any idea what the black outer layer is made of?

They also had the XO stir fry version

LOL When I was at HKL2 this weekend I was thinking that if they are able to add the XO sauce to their regular pan fried version I would order that… Do they sell their XO sauce in a jar there?

Contrast Dragon Beaux’s XLB to those of HKL2, they are so machine-made uniform…

So not quite in the same league as HK’s five layer goodness but for my tastes it was very good.

Not quite a huge fan of zucchini and bell peppers

They look quite raw in texture, no?

Hmmph, any idea what the black outer layer is made of?

I’m thinking activated charcoal. Mostly for that all black look.

LOL When I was at HKL2 this weekend I was thinking that if they are able to add the XO sauce to their regular pan fried version I would order that… Do they sell their XO sauce in a jar there?

Contrast Dragon Beaux’s XLB to those of HKL2, they are so machine-made uniform…

Mmm… I think Koi Palace has XO sauce on sale at their counters, but I never paid much attention to the counter area at Dragon Beaux.

Haha, yeah the XLB are definitely more uniform. I forgot who, I’m thinking hyperbowler? but they mentioned they had an XLB machine.

Ah, this would be at Lei Garden and had it twice. But they did a great job there (I can’t recall the prices since I didn’t pay… haha…).

They look quite raw in texture, no?

Yeah quite crunchy, but for me, I just never liked bell peppers.