What is meant by “cook until the oil separates” in Indian curry recipes?

I am making my beloved Hot and Spicy Hyderabadi Tomato Chutney, and intrigued by this step, which is not always men, but seems to make a difference.

Here is a discussion on stack exchange .

I think there might be a name for this. Bhunao? 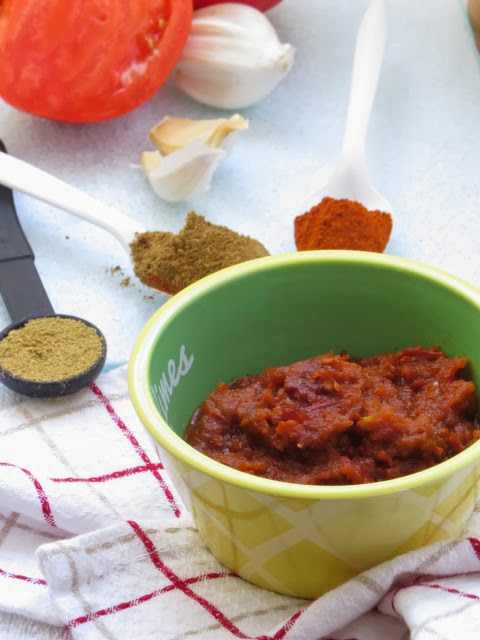 “Until oil separates/leaves, cook it…” is an attributed statement you will find in the instructions of many North Indian gravy preparation. Being a south Indian who was raised in coconut and tamarind base dishes where everything was simmered and if,...

“…the next important step is that you have to fry (bhunao) the masala well. Keep sautéing them until the moisture gets evaporated and it thickens and you would see trace amounts of oil in separating and oozing on the sides of the masala.”

On reddit I read "Maggi’s website mentions a ‘pecah minyak’ which basically means to cook until the oil floats to the top, "

Does anyone have any insights?

I have zero Indian cooking experience. Hopefully @Saregama can explain what exactly it is. (And we all learn something, too.)

Based on your description, I wonder if it means to cook the dish until the liquid is reduced?

Some of Marcella Hazan‘s Italian recipes include an instruction to cook “until the oil floats free of the tomato” and I always thought it meant to cook down something until that point.

Now I am curious, too.

"…a classic Malaysian chicken curry, splitting the sauce is such a key step in the process that we even have a culinary term for it: pecah minyak, literally meaning “breaking the oil.” 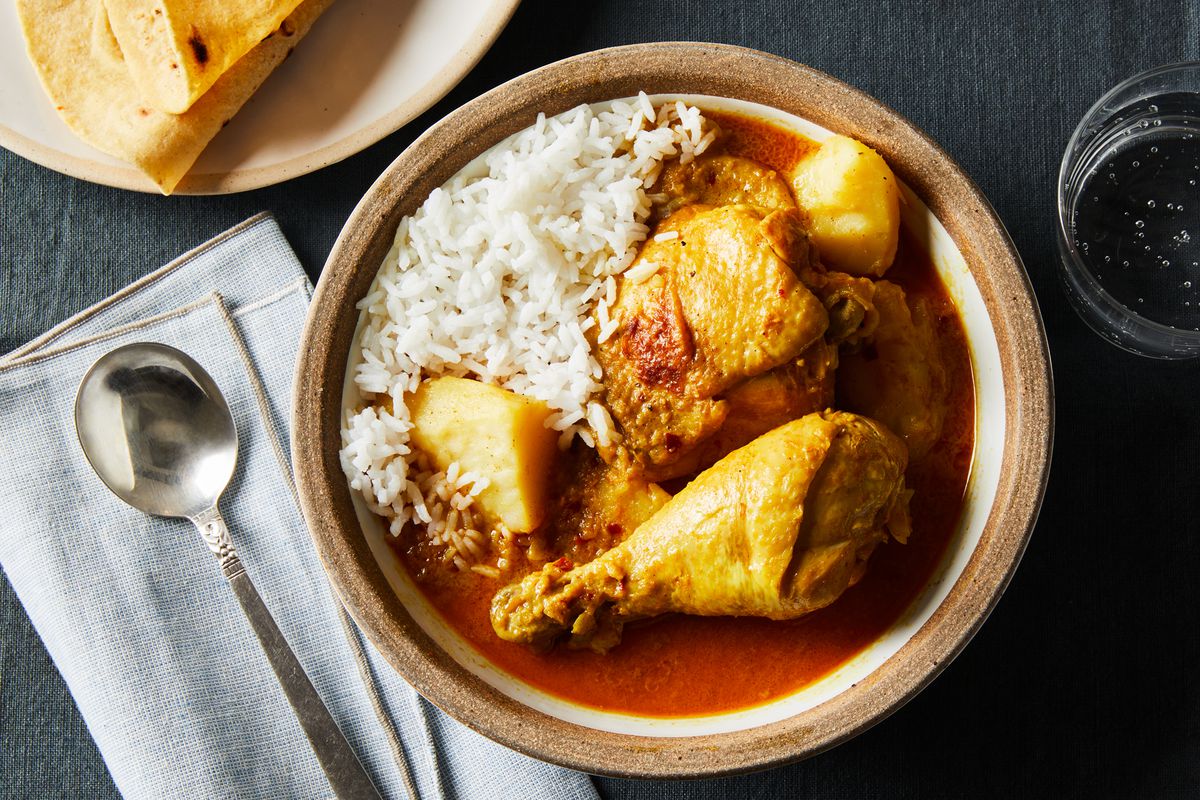 Walk into any curry house in Malaysia and you’ll often find a sea of curries on display. There are chunky, hunky beef rendangs, turmeric-tinged hunks of ayam masak lemak (literally “fat-cooked chicken”), crimson fish curries that make your brows...

""In my household what you just described is “naik minyak”…oil rises to the top…“pecah minyak” is …curdles, breaks down and releases oil. "

There is also a comment about “Taek man” in Thai. 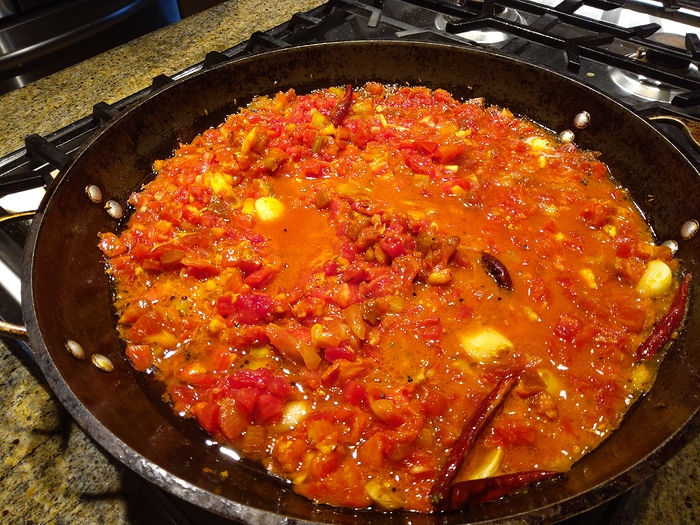 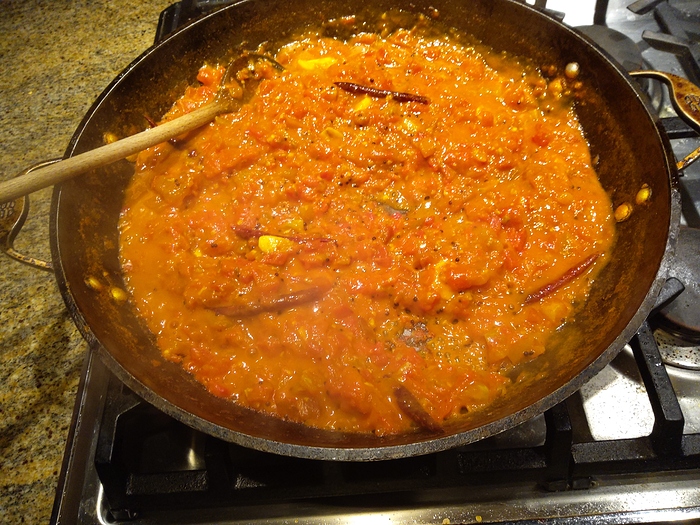 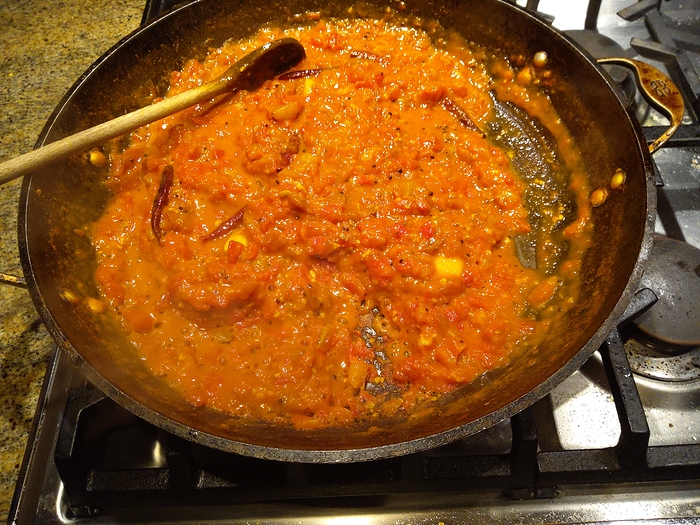 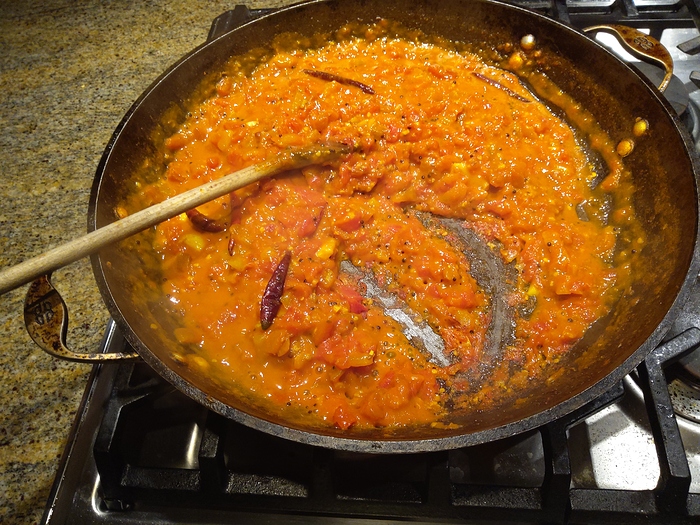 This is where I usually worry about messing up vs doing better. Cook faster, slower or stay the course (with regard to how much heat on a gas burner)?

I stayed the course. 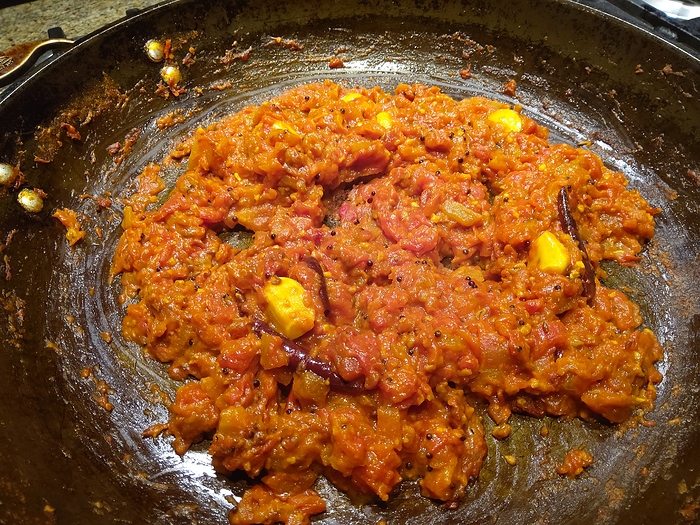 Usually I add a bit of salt now, and it loosens up a bit. Added salt, and a bit of sumac, wondering about my almost year old Za’atar from Turkey. Time is flying.

Cook slowly, stirring, till oil separates. This can take a long time and requires patience. It is also the difference between correctly cooked spices and gravy bases and not - what we would refer as to “raw” or “kaccha” masala - meaning it’s not cooked long enough / correctly.

The water from the tomatoes and onions cooked off and they reduce to a jammy consistency. There is an assumption that you used enough oil for it to separate at the edges / on top. If you didn’t, or are in doubt, and the paste starts sticking to the pan, add a tbsp of water to loosen and continue to cook.

The other way you’d know is by smell - but that’s a harder cue if the cuisine is not one you are used to cooking. Eventually, you can tell the smell of cooked masala from one that’s not quite done yet.

Keep in mind that oil separating is not synonymous with browning the onion/tomato base. You can have a bright red paste that oil separates from - and you should, unless the recipe calls for brown.

You “bhuno” the masala, and it becomes “bhuna” masala (bhun-na - the verb - is to slowly roast/cook/sauté/pan fry). “Bhunao” is a funny (wrong) anglicization into “hinglish” - I “bhunao-ed” the masala - instead of I “bhuno-ed” the masala.

I think it means, as to food chemistry, that enough water-content has evaporated so that the ingredients can go above the water boiling point, which is low (211 or so Fh), into actual frying temperature, which is a good deal higher and makes new things possible.

Thank you! That makes sense .

I always thought of it as a double fry technique. You fry/saute/brown your onions,etc to start. Then, after the whole process is done and all the water has evaporated, the oil separates and you fry again. It’s one of those things that if someone is standing next to you and shows you, you can learn right away, but otherwise it takes some time to figure it out. Especially for beginners, I don’t recommend reducing the oil in a recipe for this reason. I will often cook one day ahead, then refrigerate. The next day I will skim all the oil off the top and reheat.

@Saregama, we say bhoon (“Masala bhoon lee ya?”), but I wonder if that’s a Punjabi dialect thing.

@bmorecupcake yes it about tense and person as with any verb, just funny to translate / “hinglish”-ify

I think the multi-step vs single step depends on the recipe, right? Meaning do you want caramelized onions first, then you add tomatoes and whatever and reduce again so the additional water evaporates, or is it a non-brown onion recipe where you start with everything together in a paste (we make seafood and other coconut curries this way) that’s fried all at once.

My mom’s trick to reduce oil needed for the masala to be properly cooked is to chop and sauté aromatics first, then add chopped tomatoes and fry those down, then grind, and then sauté to finish. The chopped step enables some caramelization without the amount of oil that starting with a paste needs. It works, and you can get away with skipping the last step even.

Hi, in India we make a lot of curries or gravies by adding many dry spices in oil and if the spices do not cook properly in oil they give out a raw taste… Therefore after adding the spices, we usually cook the whole gravy for few minutes until we see oil separating or releasing at the sides.This makes the gravy tasty and helps us in knowing whether the gravy is cooked well or still it needs to be cooked on low heat…We usually use gas cook tops and this is the method we usually go for to let us understand if the masala or the curry is cooked perfectly or not…
You can refer to this blog below where I use these phrases… 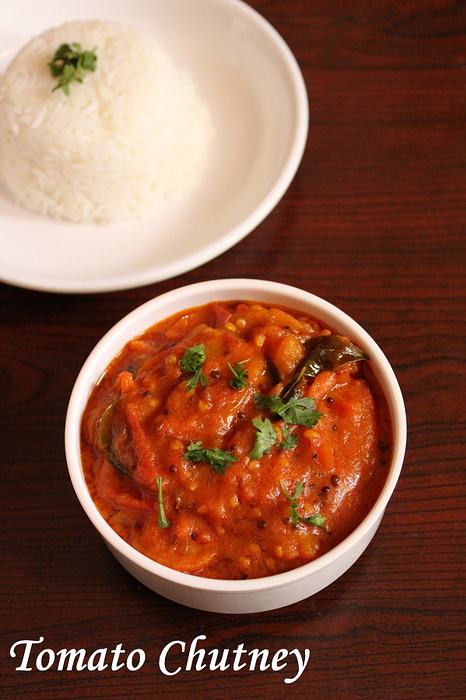 Tamatar ki chutney, a chutney kind of semi gravy dish made by cooking tomatoes along with some tempering and also by adding spices.

So helpful comments; thank you!

By George, I think I’ve got it! 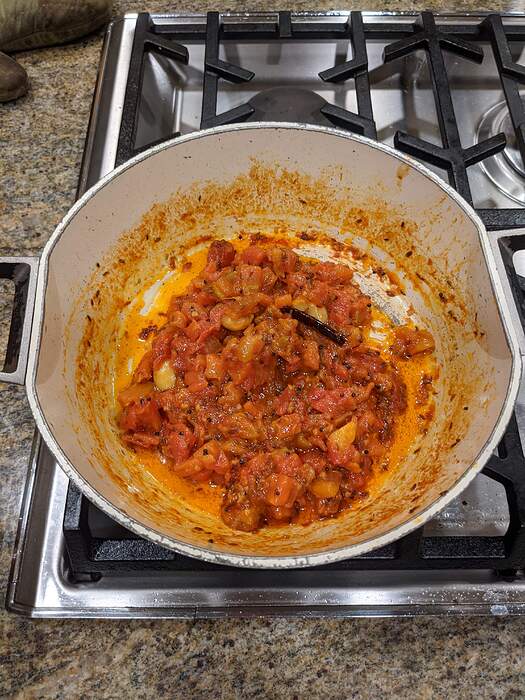 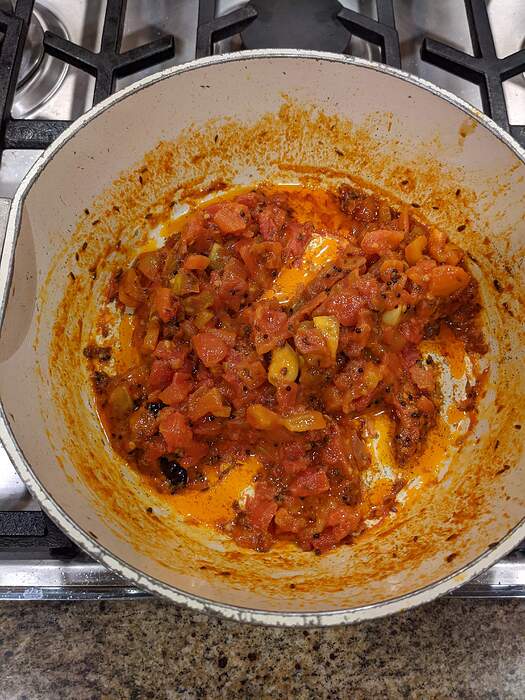 Looks good to me.

Thank you. I reviewed this thread, and actually followed the recipe which was for a smaller amount in a smaller pan. It’s a coarser chop on the tomato, but otherwise I think I understand the process, and I like it!