Houston, we have the end of Daylight Savings Time (as of Saturday night/Sunday morning here in most of the U.S.).

We start the “It’s dark in the morning!” and “It’s dark when I leave work!” wails and laments. I call it hibernation season. And probably soon to be “turn on the damn heat, Linda!” season.

So, what’s cooking in your warm and cozy homes this month?

I really wasn’t in the mood to cook tonight. Shitty day.

But, like an idiot, I had taken out a second chicken breast to defrost a couple of days ago. So I had to cook it.

So it was seasoned with olive oil, and a mixture of Penzeys’ Ruth’s Muskego Ave. seasoning, dried lemon powder, dried thyme and paprika. Pan-seared in more olive oil, then I poured in a combo of Better Than Bouillon chicken stock, lemon juice and white wine, covered and simmered until done.

A coupla Yukon Gold taters were chunked up and steamed, then buttered, salted and peppered. Peas and summer corn off the cob was cooked and buttered. 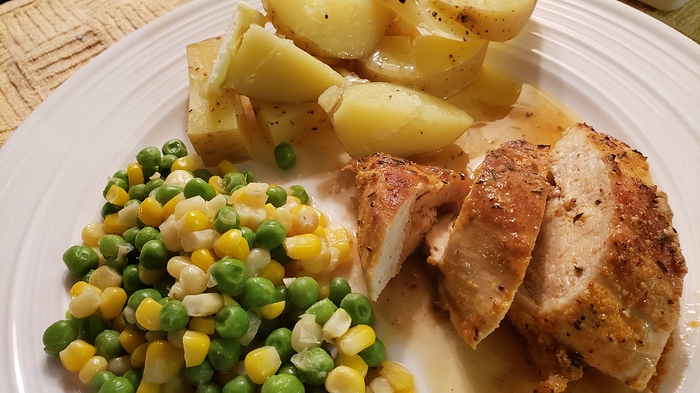 Some stupid, cheesy, mindless movie from Amazon Prime on the screen.

Today, It was Motherless Brooklyn (great film) Followed by burgers and fries at the nearby pub for dinner. My burger was a delicious mushroom onion with a curry aioli that worked well. Fries were crispy and dipped in more aioli. Came home and watched The Peanut Butter Falcon ( another winner) with a mug of mocha java and butterscotch pudding.

What’s worth watching on Netflix?..

I call this time of year " The dark ages. " Italian sausage and beans for dinner . And a stow . Shit ton of wine
Cheers.

We had another fabulous dinner at Bloom. Details and pictures are in the link below in case anyone is interested.

We had another fabulous dinner at Bloom. They recently came out with their new awesome Fall menu. We shared several excellent appetizers including spicy marinated pork tacos with wasabi coleslaw; assorted wild mushroom risotto; kabocha squash salad with roasted apples, candied pecans, and endive in an apple cider vinaigrette. For entrees I had a wet aged ribeye steak with grilled vegetables and Mrs. P had grilled branzino with wild black rice, and mushroom with saffron cream. [image] [image] […

Tonight was a version of chicken shawarma based on the Serious Eats Halal Cart recipe. The marinade is made with fresh oregano, plenty of garlic, olive oil, fresh lemon juice and some spices, which I amp up – cumin, coriander, garam masala, turmeric. Because it’s what i had on hand, I made it with BLSL chicken breast. To go with I made some roasted cauliflower and chickpeas, tossed with EVOO, garlic, curry powder. separately roasted some broccoli until crispy on the edges. Also made some brown rice pilaf in the rice cooker – added diced onions sauteed in garam masala, turmeric and a bit of cumin, a clove and replaced half of the cooking liquid with chicken stock. It hit the spot after a long week, kiddos loved it and was relatively hands free (everything went into the oven), so that I could continue to do other things while the cooking finished.

Tonight was a version of chicken shawarma based on the Serious Eats Halal Cart recipe.

Milk Street Za’atar Sheet Pan Chicken
I got a Milk Street Magazine in the mail, and I liked it! 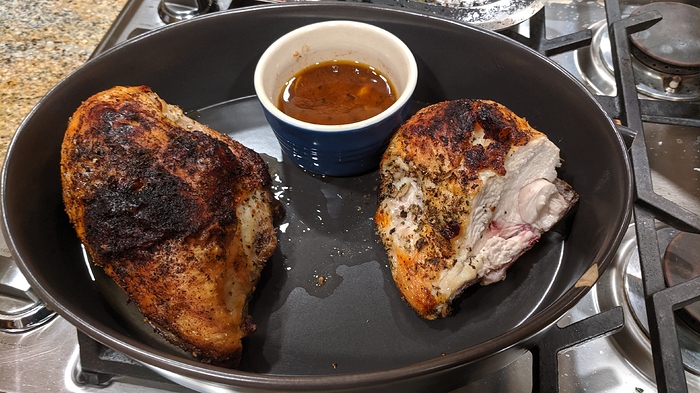 I’m thinking I might subscribe to the digital version! I know how some folks feel about CI subscriptions, but I don’t know how HO’s feel about sheet pan dinners. Is there a thread? I’m thinking there has got to be something worth sharing.

I know; right? Sheet Pan dinners AND CI subscriptions
Full disclosure; I’ve kept a CI subscription going for most of my adult life, and that’s starting to seem like a long time!

I have never been a fan of Cooks Illustrated - too OCD and fussy for me. I recently picked up a copy (July-August 2017) of Christopher Kimball’s new magazine, Milk Street, and was pleasantly surprised that I enjoyed it. It’s doesn’t just list recipes but talks about the context of the recipes, including Piri Piri Chicken in Capetown, ceviche in Peru, and Beef Suya in Nigeria, with lots of color pictures. I haven’t tried any of the recipes and probably won’t end up subscribing, but it’s fun learn…

You know that if you start a “sheet pan” or any other topic, we will all jump all over it…
The core posters here really display real interest in anything any one posts here, present company included…Perhaps you want to start one…
For me many Shabat (Friday) diners consist of a simple whole chicken with some root vegetables on a sheet pan… and then of course some wine, appys first and desert…
But why not…I have even done sheet pan roasted beef and veggies…

The current season tv and radio recipes are free on the website (for a while) - in case you want to give those a test drive before subscribing. They also have a couple of cookbooks out.

I really liked one recipe for faux-pinchos morunos using pork tenderloin, and really disliked another recipe for chicken musakhan (sumac chicken, which I had made before I tried their recipe, maybe that was the problem). So, mixed bag.

Sorry you had a crappy day. Hope your dinner (and wine) helped. It looks delicious! Sometimes all you need is a good dinner, wine, and a stupid movie…

DW oven baked a few chicken legs after a bath in a wet breading. This pic was all we took: 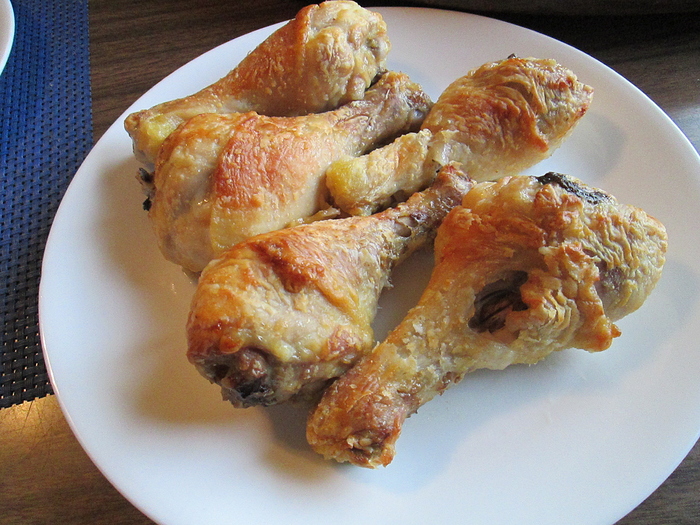 DW oven baked a few chicken legs after a bath in a wet breading.

Leg of lamb roasted in the fireplace 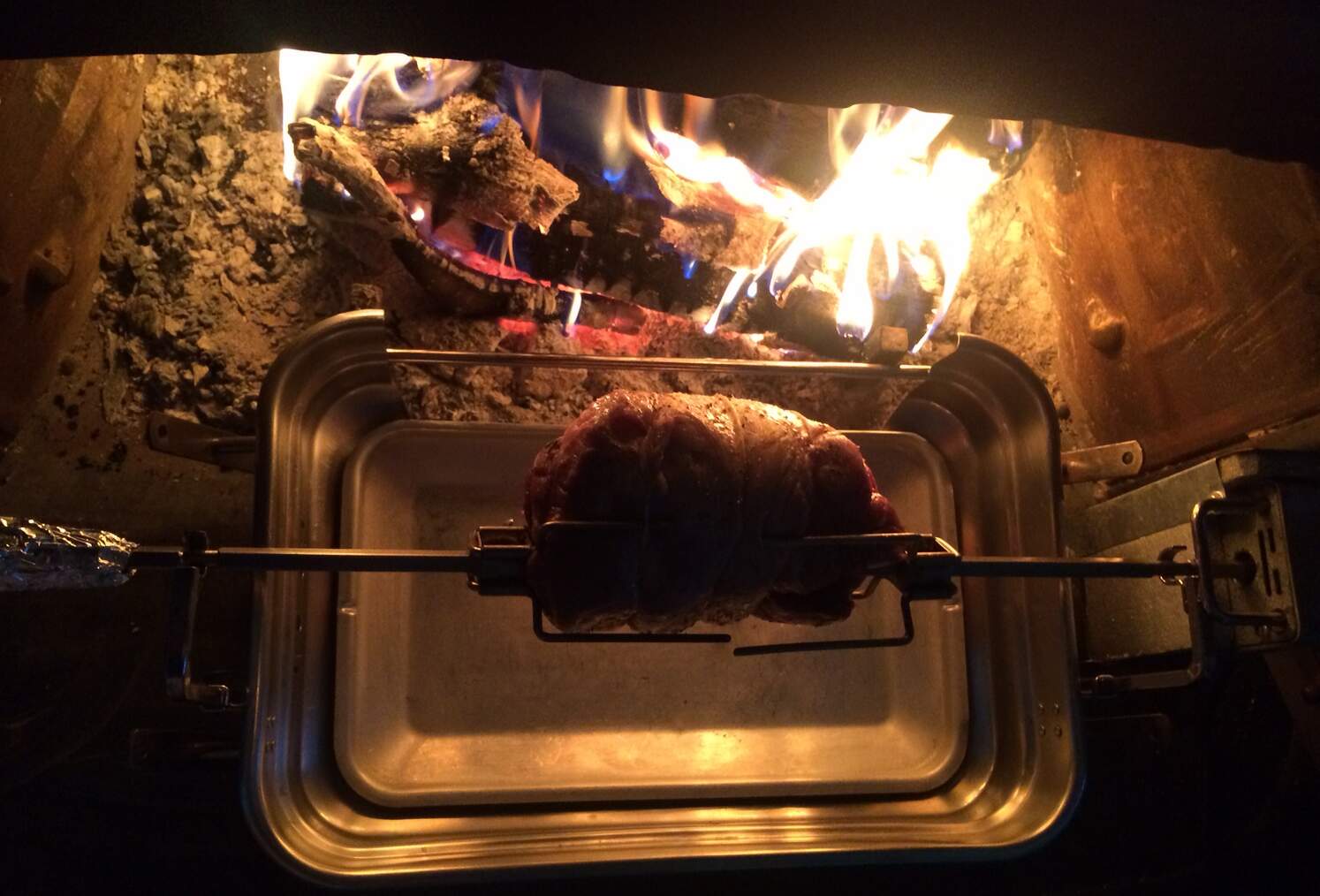 Leg of lamb roasted in the fireplace

Holy CRAP I WANT THAT!!!

How long did it take? Doesn’t matter, just have a few glasses of wine in the meantime.

I stayed at a villager’s house in the Albanian Alps who made me a simple dinner and breakfast in the fireplace whilst drinking booze (also with her coffee early in the morning).

Didn’t take notes but think it was just under an hour. Pulled it at 125F; could have left it to 130 but there were no complaints.

We have also roasted chickens but they seem to take longer -> too much wine! -> back to Judy Rogers’ oven method = in and out in an hour.