What will you be cooking this month? Squash and pumpkin comes to mind instantly. Food in season includes mushrooms, sweet potatoes, pears, chestnuts, duck or game… What’s your favourite autumn food?
Bon appétit! 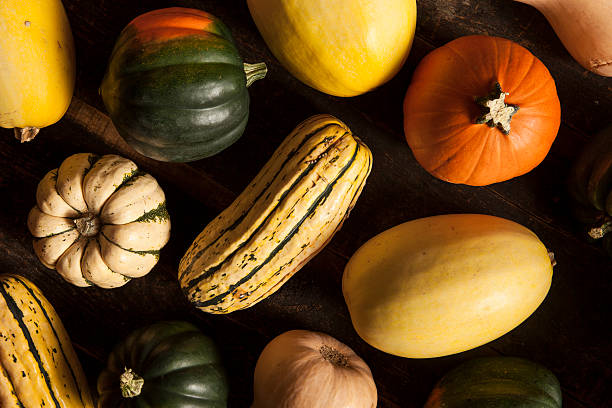 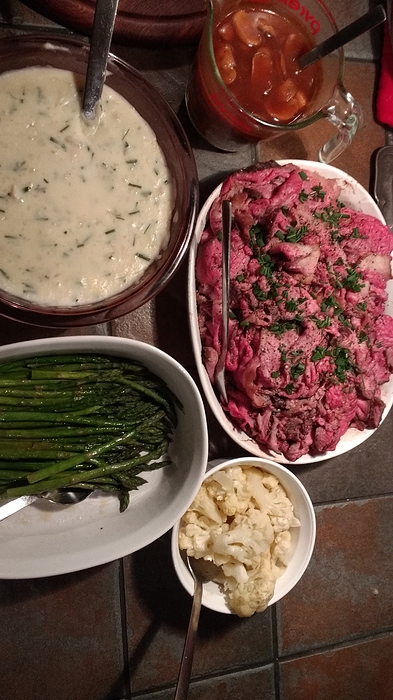 I guess you’ve been to Trader Joe’s…

Last night’s dinner turned into tostadas tonight. Fried corn tortillas, smeared with black beans, topped with the pork, and then some cheddar cheese. Under the broiler for the melting action and then topped with lettuce and another late season tomato from the garden. 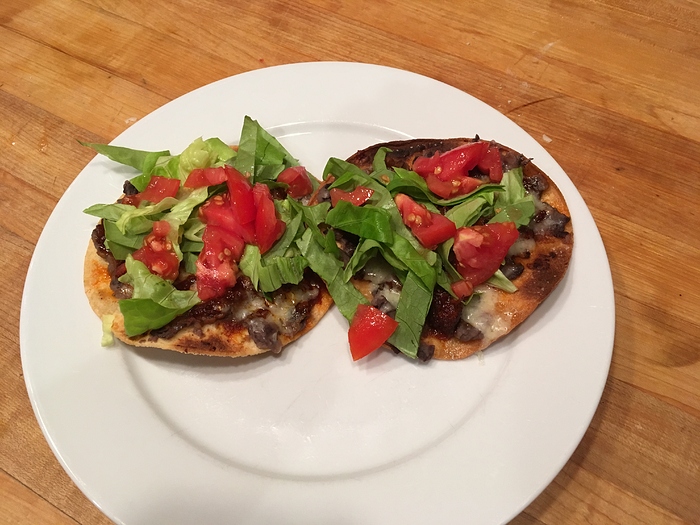 I did some cooking this morning to bring my friend and her family - a big batch of the “life changing” crackers seasoned with just nutritional yeast, a tiny bit of rosemary, and a hefty amount of black pepper. Also made a batch of the vegan tomato soup i make that she loves (includes tomato paste, sun dried tomatoes, v8, cashews, and white beans) it gets very creamy after blending together.
I kept a serving of the soup for my dinner and had a side salad of just mixed baby kale and arugala with a lemony vinegrette
Also bottled my new batch of kombucha, hopefully i fixed the issues from last batch and will get more fizzy bottles! https://www.mynewroots.org/site/2014/07/the-life-changing-crackers/

I went to Mario Leon-Iriarte’s wake early this afternoon. Mario was the owner of Dali Restaurant in Somerville, MA. I’ve been going there for about 20 years now, although not as often recently - but I’m still considered family.

Met several of his sons and daughters-in-law. One DIL regaled those of us who were there early with stories of Mario about his life we didn’t know as customers of Dali. His was a life well lived with family, friends, and many strangers who became friends as he traveled around the world.

It has been too long since I was last at Dali. I will endeavor to go there next Friday night to lift a glass of sangria (and probably a glass of Licor 43) to Mario’s memory, and enjoy his restaurant’s tapas and the company of the staff.

had late lunch, Ledo Pizza , not aware that guest cannot eat meat. He was here for or labor’s day party but we had crabs, oysters and smoke pulled pork.I did not keep tab of what he ate then but h e did eat my spring rolls that day as he was one of the last to leave and I served spring rolls for the guests who left late as they had a 2 hour ride back home. He told me he ate the spring rolls because there was not that much meat in them.

We went to visit my pomeranian breeder as they had fallen in love with my babies, had been on the waiting list… The breeder called and told them to visit the 6 weeks old last week. She will be available after 8 weeks. They did not want to leave the baby as she is very cute. They already named her. We had a ball there as my poms met their brothers, cousins etc. They will be returning in 2-3 weeks as soon as the breeder says the baby is ready and weaned from her mother. I want another one!!!

So, Pizza was half bacon and pepperoni, half mushroom and vegetables for him and his wife.
there were 2 tenderloins in the package but only cooked one
So, not too hungry after eating that pizza so late.
seared pork tenderloin with coconut and grapeseed oil, finished in the oven , rest for 8 minutes
just warmed up small amount of espinosa con garbanzo, the left over biscuit from red lobster, and some gravy ( defrosted stock from freezer, chicken and pork adobo gravy)
Picture is my portion. Son already started to eat. The espinosa con garbanzo was cooked yesterday, warmed up 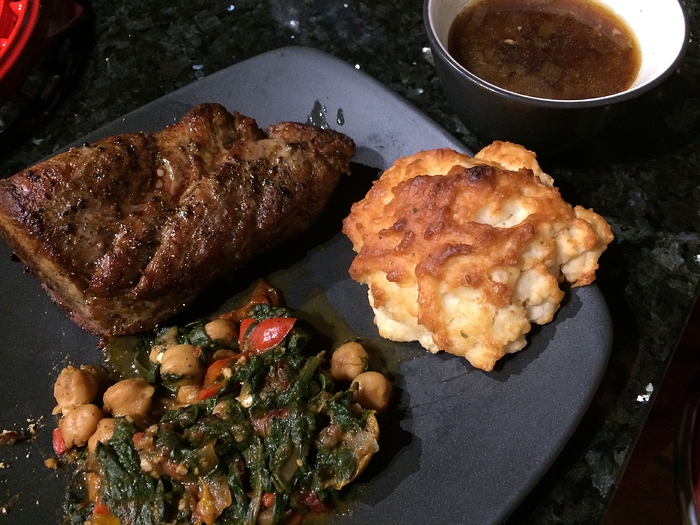 Thanks for moving my last “WHAT’S FOR DINNER”
Pumpkin comes to mind.
I love Pumpkin pie, with cream cheese an evaporated milk.

Another one of my favorite which I have never found here in the US, is Chinese savory pumpkin cake called KIM KUE KEH
Here is a recipe but I have never attempted making it. I do not know how good this recipe is but someone commented that it is too soft.
Just like the turnip cake, you have to leave it overnight.
Then, we pan fry it often before serving. 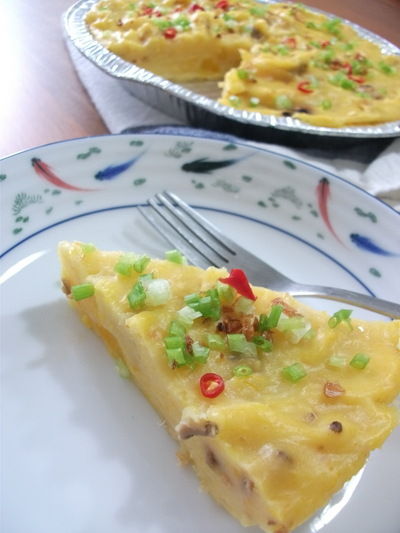 Fennel & sausage stew in a saffron sauce with heavy cream and a small garden salad. 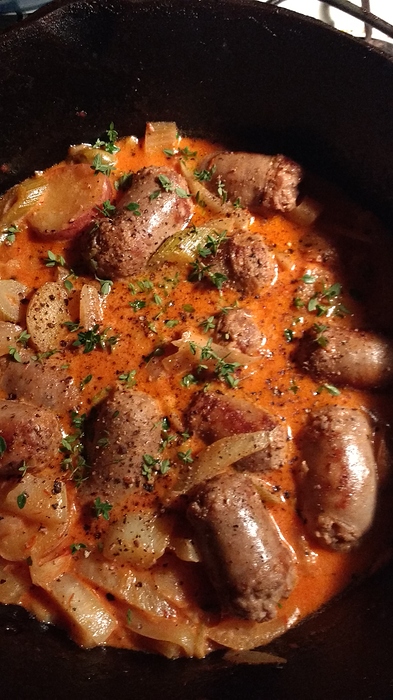 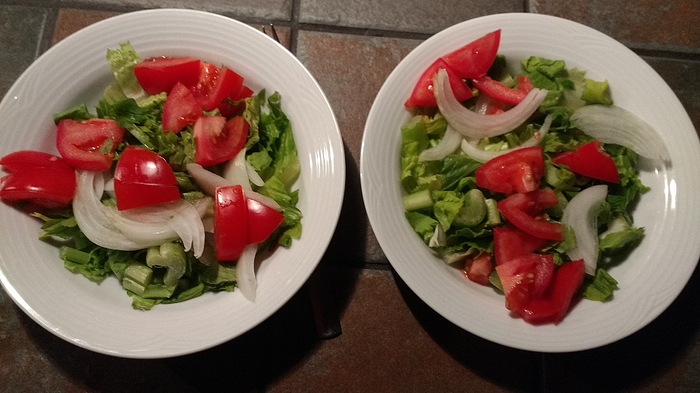 Some sous-vide brisket from the freezer, defrosted and finished in the oven, with some broccolini. 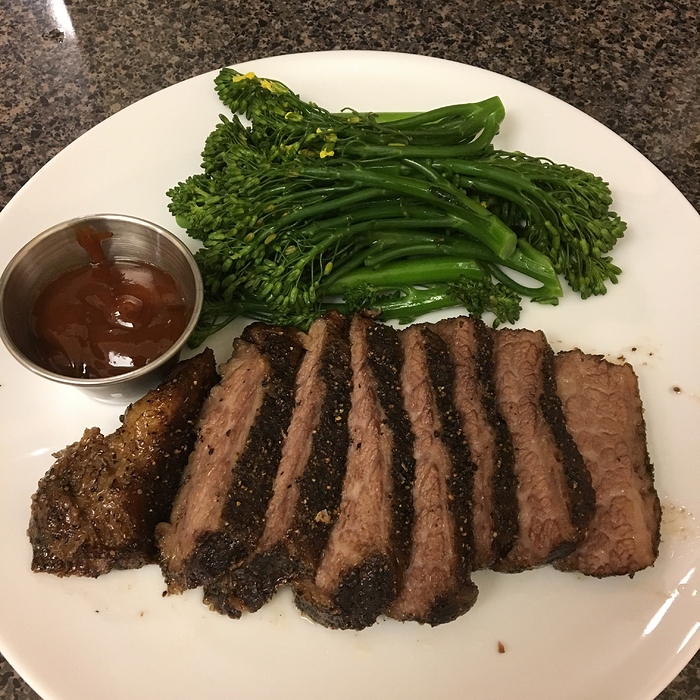 The crackers sound great! I’ve been making flax crackers recently and never thought to put nutritional yeast on them.

My coworker has recently started eating low carb so I’m the go to for ideas except we have different low carb eating styles. She wanted to try mini tacos with cheese shells Sunday so I obliged. Fail! She was bummed but I just tossed everything in a bowl with salsa and sour cream and enjoyed a taco salad I could’ve enjoyed an hour earlier

I’ll spare you the fail pictures. 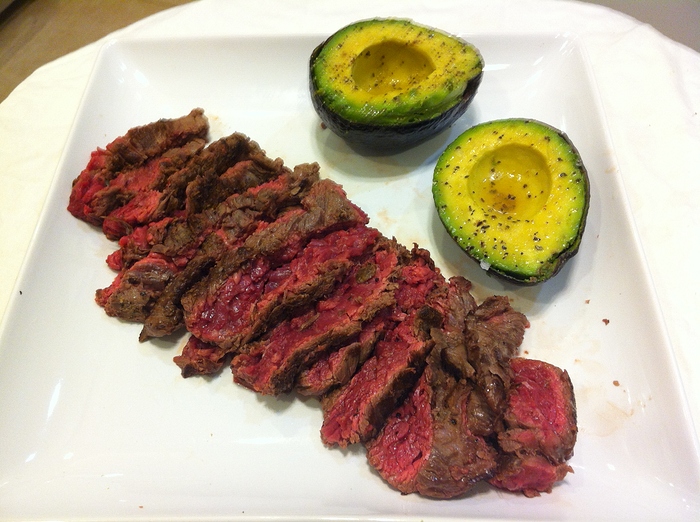 There’s supermarket pate de campagne to use up. Some homemade soda bread to accompany. And homemade “Christmas” chutney (so named because I made it for 2015 Xmas).

To be followed by lamb chops. And something using flageolet beans - probably heated through in olive oil, with diced tomato and finished with basil and parsley (as both are on their last legs).

There’s supermarket cheddar if we need something to help finish off the soda bread.

I think you would love these actually- waaaay more tasty than just flax crackers. Don’t use the figs they always burn for me anyways. I prob add 1/4-1/3c of nooch per batch and sometimes a splash of water to help it mix in better.
It’s a really flexible recipe, i just use more flax instead of the psyllium husks. And SO much cheaper to DIY than buy the Dr Krackers or raw vegan crackers i love from WF…! 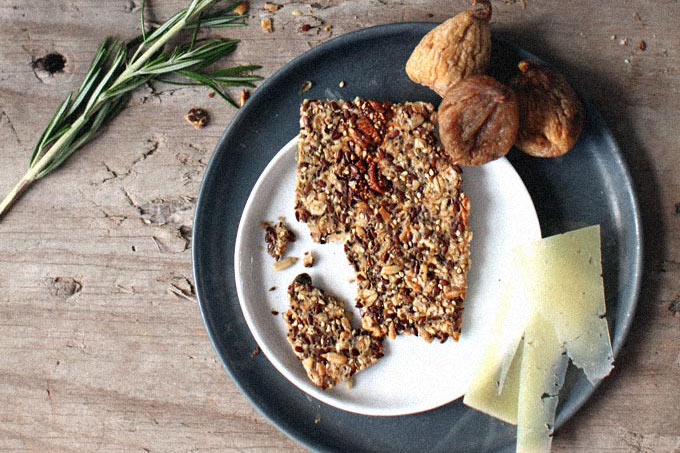 The funny thing about writing a blog, is that I never know how popular my recipes will be. Often, I think I have a real zinger and no one really seems to appreciate it on the same level as I do. Then I post something …

Thanks! I started making my own because $6 a bag was getting outrageous.

Yesterday was my actual birthday, although i had celebrated sat with friends at the ballet (swan lake) and bubbly afterwards as well as some afternoon bubbles and newborn cuddles on sunday.
Last night a friend took me for a casual dinner at an ethiopian restaurant not far from my neighborhood, we shared a sampler plate (platter!) and we both generally giggled at how uncoordinated we are trying to eat using the delicious injera.
Work was a special kind of crazy today and i was there late dealing with what i could. I made myself a bowl of smacked cucumbers and added in enough extra firm tofu that it qualified as a meal. Or close enough. Kombucha a la carte. I wanted to make sure i wasn’t too full for dessert! One of our factories sent these special korean pastries they make for celebrating mid autumn festival (which is happening this week), coincidentally they are vegan! It’s a sticky rice pastry in the shape of a tiny muffin filled with sweet red bean and 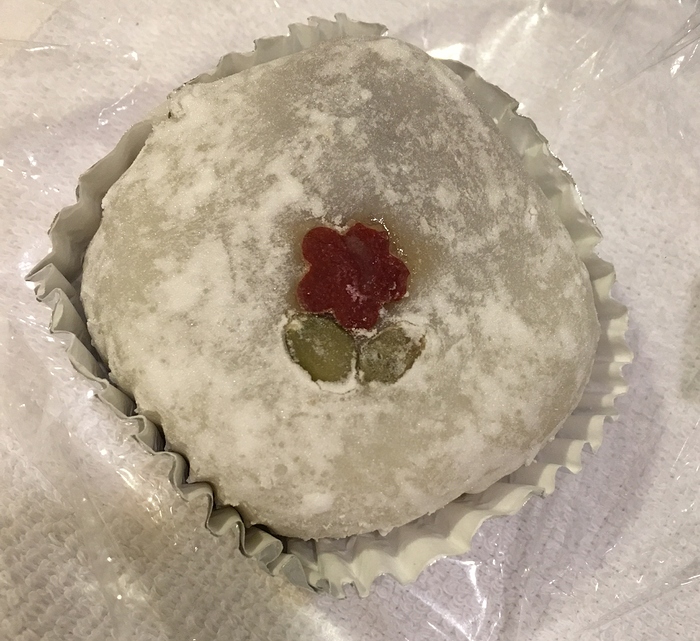 Today, in normal times, I would have started the next cycle of chemo today, but Dr. C is worried about toxicity, a word she uses way too often, and so I get an extra week! Since returning from Santa Fe I have lost way too much weight. I can already hear Dr. C saying the word “Boost” so, my job is to fix this.

Yesterday while Granddad took the young scallion to the park, I browned some flap steak and started a simple beef stew. Old School. Brown meat and remove, brown onions and carrots and a bit of garlic, deglaze with a red wine, add meat back to the pot and add a bit of water. Cover with parchment, and throw into a 325º oven for a few hours. Time for more potassium, so mashed taters and petite peas 'cause I like them.

I made an optimistic plate, and ate most of it! 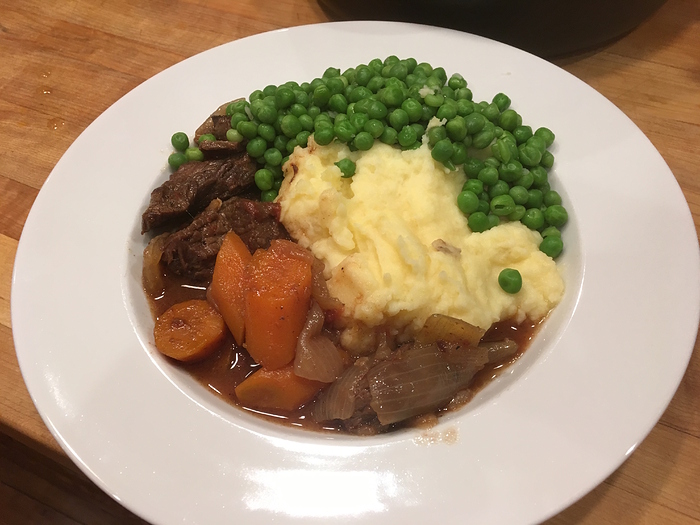 Today I met a friend for lunch at a local Thai place. I was still full at dinner, so I just had a slice of homemade rye bread and some Emmanthaler cheese. Mr. SMT had the leftover Pork and Pickled Mustard Greens Noodle Soup and the satay and rice I brought home from my lunch.

Yesterday was my actual birthday

Happy Birthday!!! Celebrate each and every one of them in the best way you can.

Fried eggs with soondae and some kimchi: 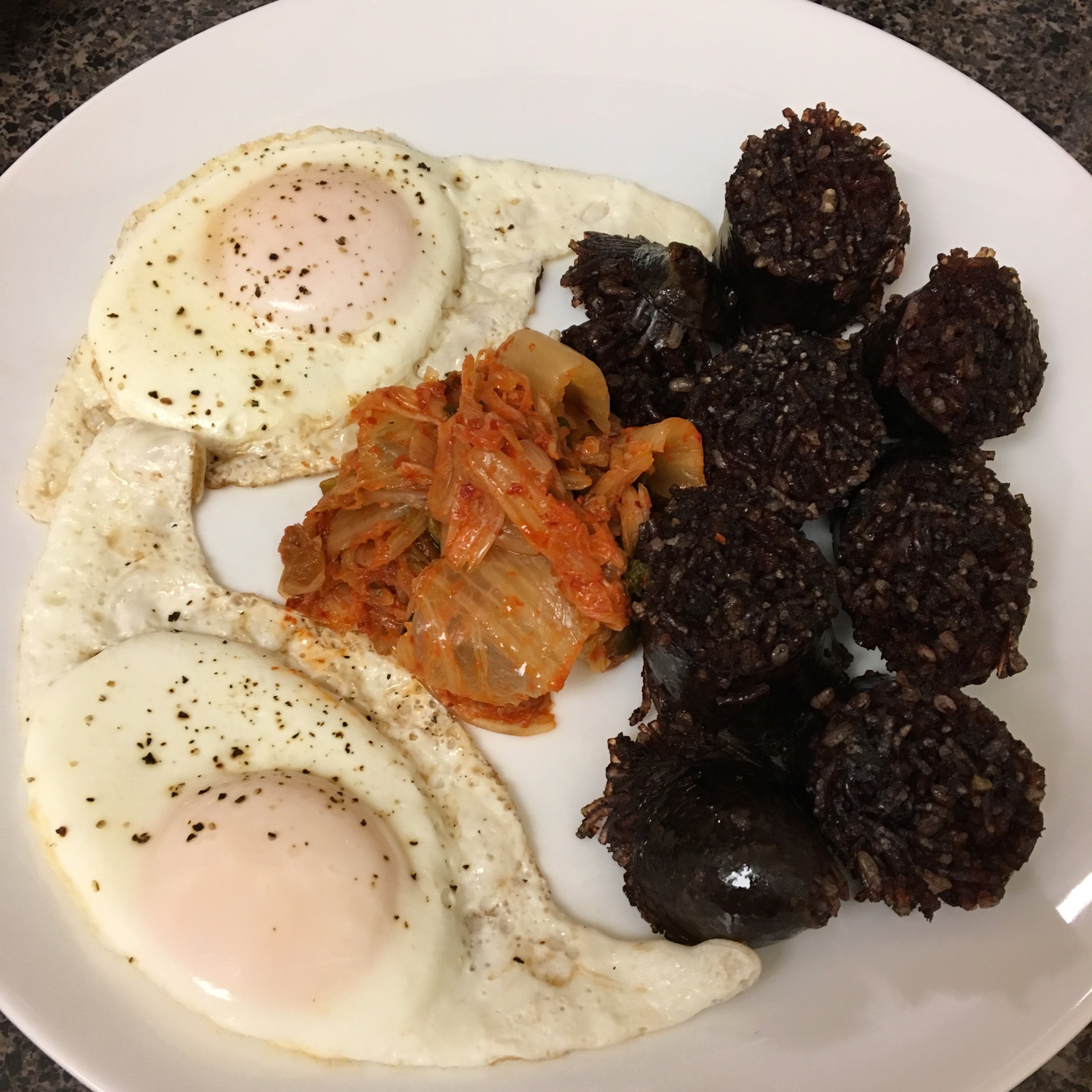