We’re going down south this quarter - to South America, that is! The HOs have spoken and PERUVIAN will be our COTQ for Fall 2022. I know very little about Peruvian cooking so I look forward to learning along with all of you. Happy cooking, eating and posting!

I’m looking forward to this.
My favourite dishes:
Lomo Saltado 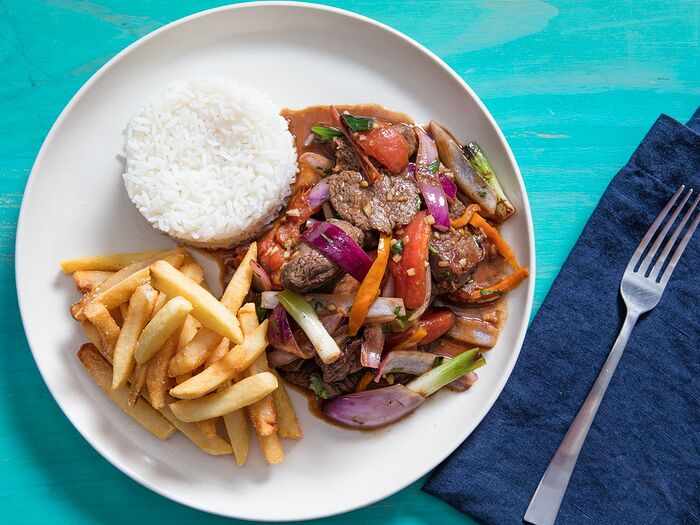 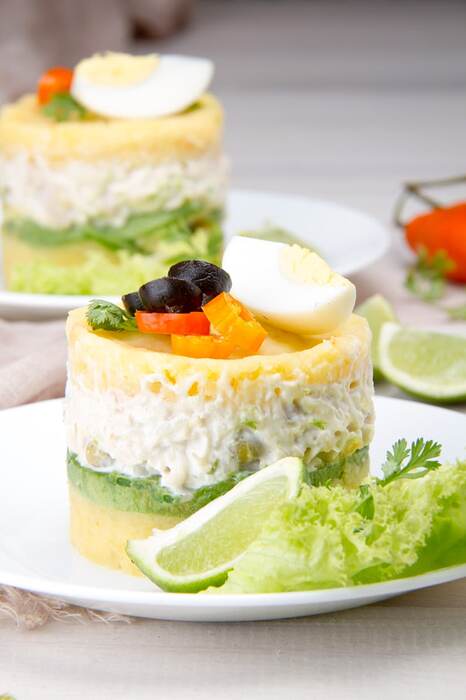 Yes, maybe this will be the quarter when I finally unlock the secret to that addictive green sauce that comes with the chicken! 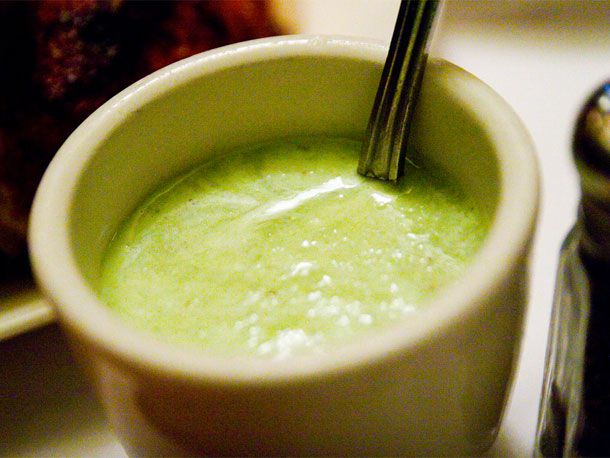 My Search for the Green Peruvian Aji Sauce Recipe

This green Peruvian dipping sauce has been an obsession of mine for years. It can be slathered onto anything for some creamy, vibrant heat. But do I have to rely on the restaurant? What if it's so addictive, I need to make it at home? And they won't... 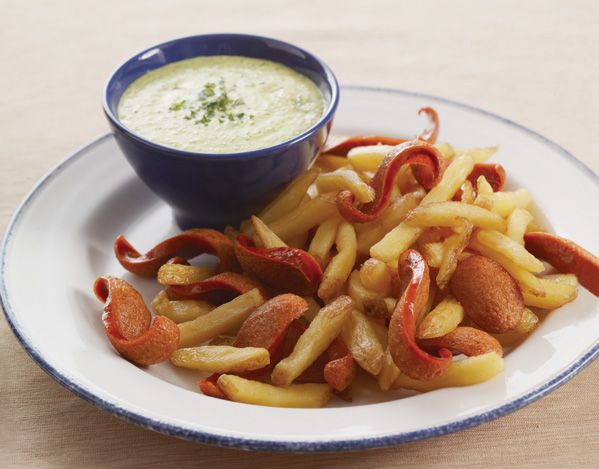 A fiery, creamy green sauce made with jalapeños and aji amarillo. Perfect for fries and grilled chicken. 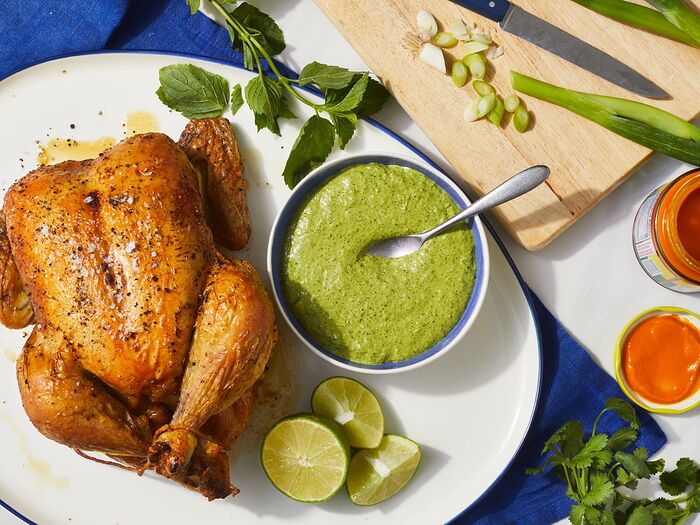 This iconic creamy sauce for roast chicken gets its robust, luscious flavor from fresh chiles, lime, scallions, and plenty of cilantro. A hit of fresh mint brightens the flavor even more.

Yea! Perfect timing! I am going to be traveling through Ecuador and Peru starting at the end of October. Now I am already off to a great start on suggestions about dishes to start with! I have already fallen in love with the green sauce that comes with pollo a la brasa/rotisserie chicken, the green Aji sauce is the perfect condiment for it. So I can not wait to taste in its ‘home country’.
I am a bit of a carnivore so the charqui should be interesting as well. Sangrecita could go either way. I love lomo saltado but it is so filling it takes me a day to recover from a meal of it. Some day I will need to learn that I do not have to eat everything on my plate. I can take some of it home with me. I really can. LOL!
Causa Limena de Pollo is intriguing, this is the first time I have heard of it. Ocopa sounds interesting too. I wonder if saltenas are often served north of Bolivia, say around Puno or Arequipa? Another dish I will love to try in its home territory/country.

I wonder if saltenas are often served north of Bolivia, say around Puno or Arequipa?

Make sure you eat Salteñas in Bolivia. Every single day, every version available, check out every Salteñaria!

But get to the shops in time. They usually run out of Salteñas in early afternoon. 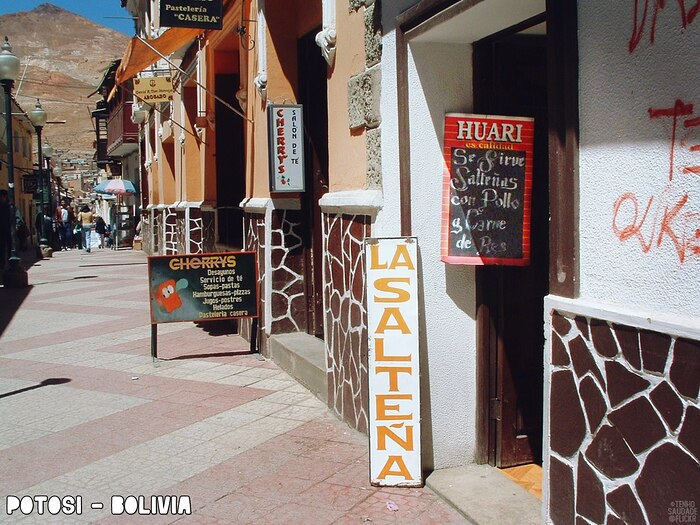 1280×960 297 KB
But you can always get them absolutely anywhere, including from these sellers by the roadside. The baskets are full of them. 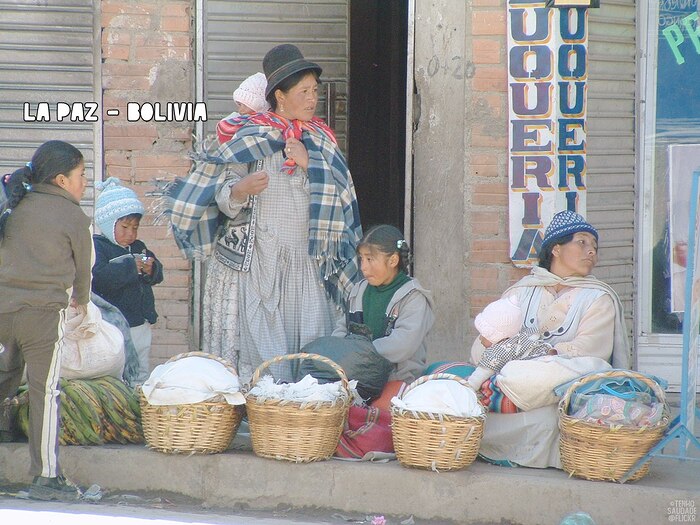 Not only do I have a bunch of frozen aji amarillo pepper puree, I am also trying to make Lomo Saltado with hangar steak. Anyone know if thats a good choice?

I think the serious article goes in to some detail abut choosing and cutting the beef.

I’m craving Lomo Saltado but I have too many leftovers on hand to make it tonight. Please post photos, @shrinkrap

Will do! Maybe Sunday. I believe @bogman is a fan of Peruvian food. Perhaps he will see this thread.

I believe @bogman is a fan of Peruvian food.

Oh Yeah! So far, Gaston Acurio’s cookbook “Peru the Cookbook” is my favorite. However, the Peruvian names for dishes is lacking in the English version’s index; so, if you look up Lomo Saltado, it doesn’t appear in the index! The Peruvian names do appear on the recipe pages, but it’s harder to locate a recipe this way. I started a spreadsheet/index with the proper names, which is what everyone uses.

Hanger steak should work fine in Lomo Saltado. Tenderloin is typical, but hanger steak is one of the best cuts.

Aside from fresh ingredients, the “secrets” in Peruvian cuisine often are specific seasonings which are uncommon outside of Peru. Huacatay/Black mint, Aji Amarillo, and Aji Panca (an odd, dried brown pepper) are central. Some vegetables, like Olluco (Ullucus tuberosus) and even Papa Amarilla (THE Yellow Potato) are nearly impossible to find in the US and other countries. These tubers need a very cool climate and are grown at high elevation. Another hot pepper, Rocotto, also needs very cool growing conditions, or it goes pollen-sterile.

Ceviche in Peru is top-notch. When there, I have it daily, at least once. Giant freshwater shrimp are caught in the Urubamba river, which is a cold, churning and oxygen-rich waterway. Aside from “Chupe de Camarones”, a delicious soup made with the shrimp, fantastic trout, which feed on the shrimp, appear on local menus.

During certain months, (Dec.-March?) Cherimoya (Annona cherimola) fruits come into season and should not be missed. Peru has many varied climates and can grow a staggering variety of fruits and vegetables, many unique to Peru. There are over 3,000 varieties of potato alone! This is remarkable, since the ancient Peruvian farmers started with wild potatoes, which are toxic.

These days, Peruvian chefs are creating new, fusion-style dishes which are amongst the best anywhere. I’ve spoken with more than one food critic/writer who echoed this sentiment. The multicultural makeup and a long history of great cuisine is bending dishes in new directions. It’s one of the most exciting places to dine, whether a beachside ceviche shack or fine restaurant.

There used to be a shrimp escabeche and causa limena recipe on FoodandWine.com, but they seem to have swiffered it from their site at some point. But, I know I am not misremembering, because it shows up on Eat Your Books (although the recipe link redirects to a different recipe with potatoes for some reason) - https://www.eatyourbooks.com/library/recipes/1347563/peruvian-potato-salad-with-shrimp

But, I made them both and they were very good. It was my first time working with aji amarillo paste. The causa was a nice twist on potato salad. I made these in July of 2017: 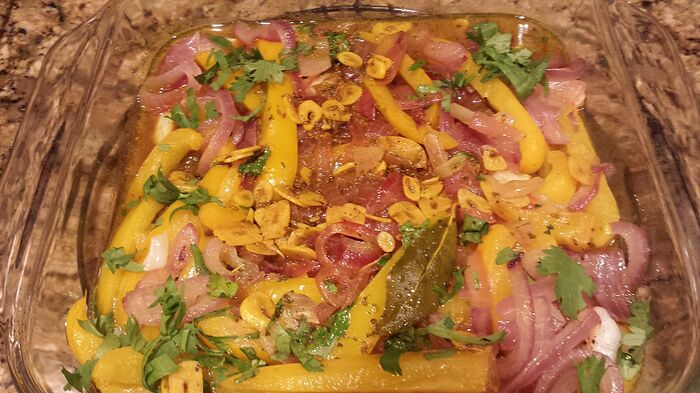 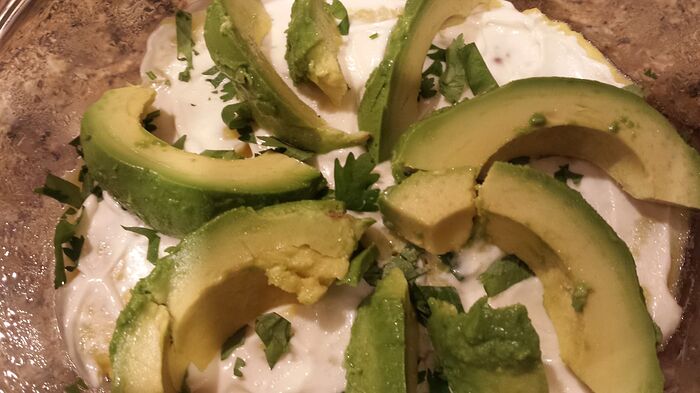 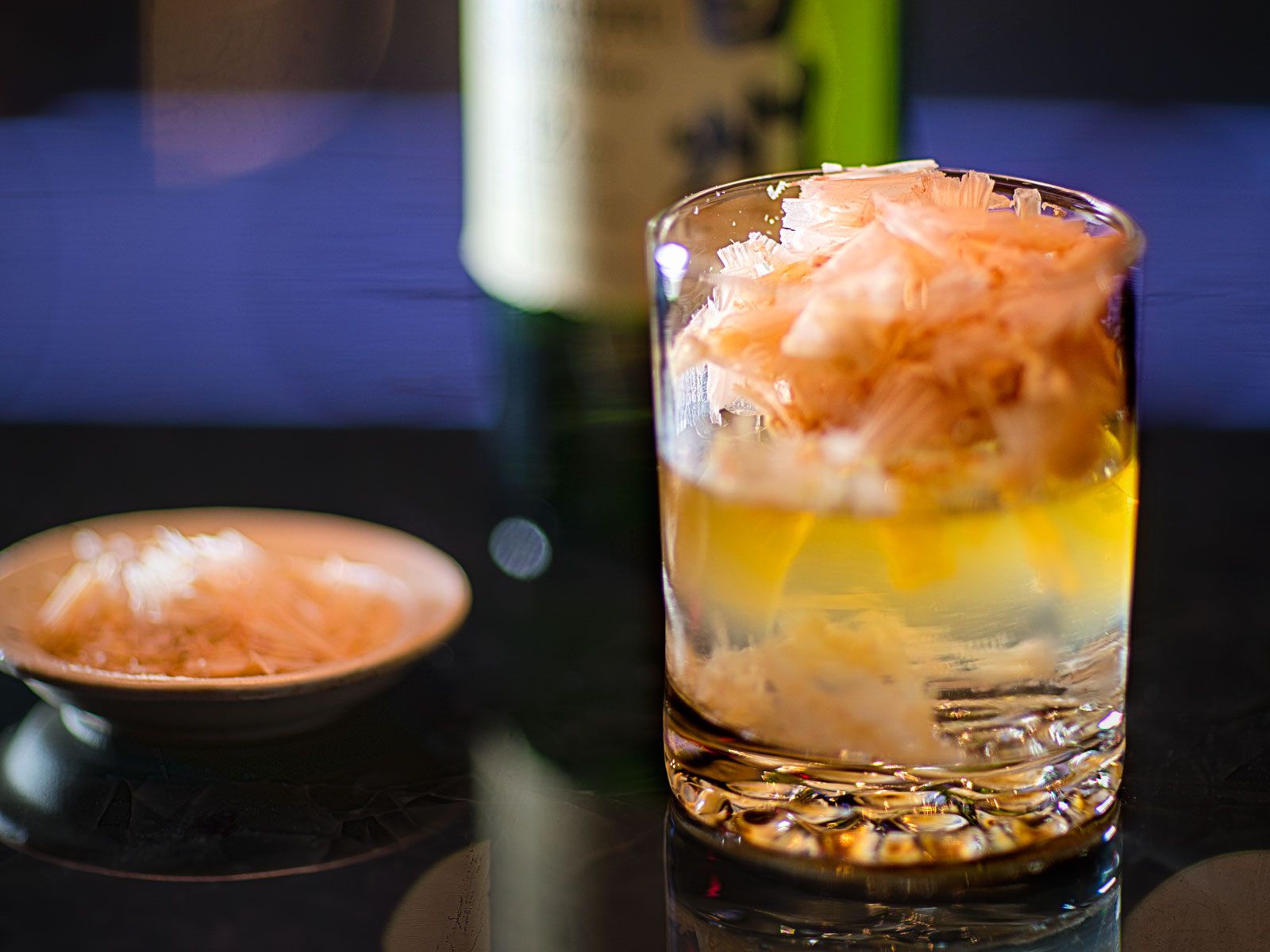 Nikkei cuisine is woven through Peruvian standards from jalea to ceviche. And don't you dare call it fusion.

Just caught an episode of Steven Raichlen’s Project Fire on PBS. The subject was Chino-Latino. I get the concept but, even having what I think is quite a bit of exposure to different cuisines, have never heard of this before. Obviously some kind of Asian-Latino fusion, but is this really a thing?

I have butchered my hanger steak 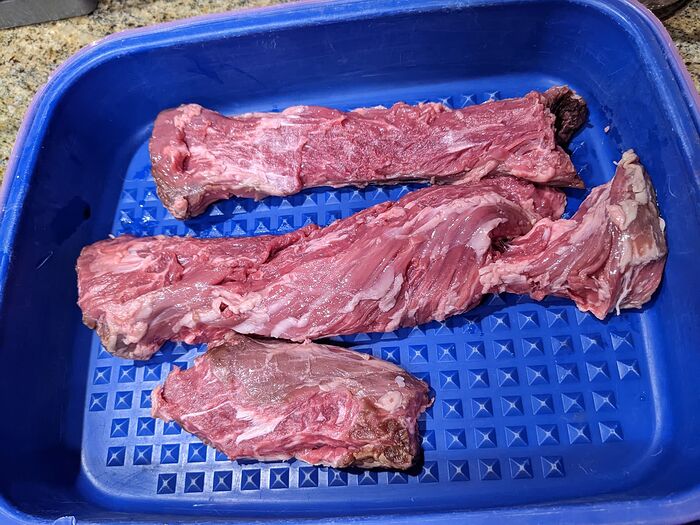 And plan to slice and season it shortly.

I have sliced up peppers and onions. I have just one fresh, ripe aji Amarillo today, but lots of other peppers, and some frozen paste. 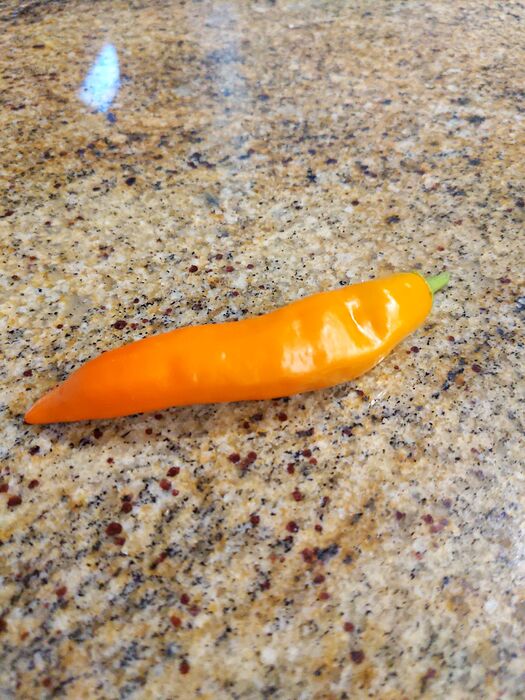 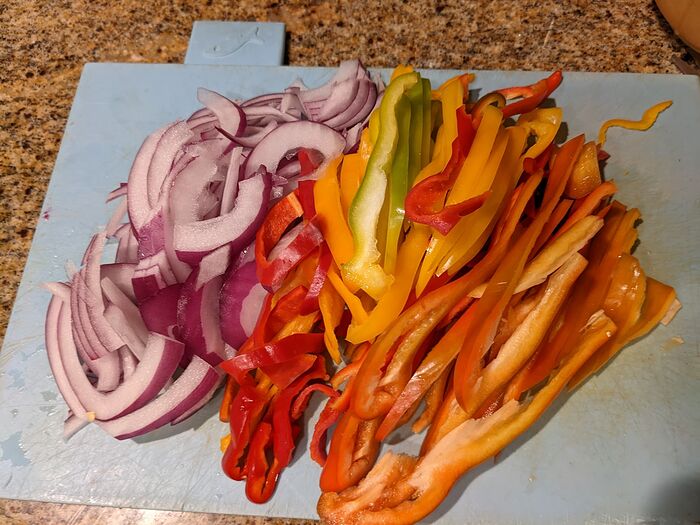 I am boiling stock for the rice, using my pernil left over to season 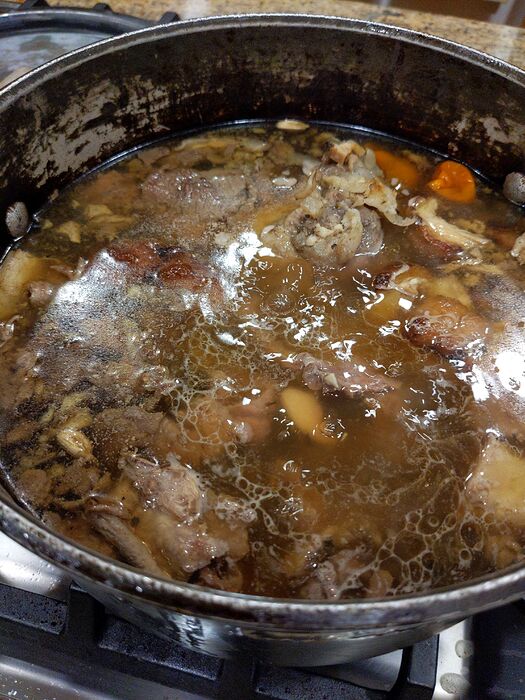 which might end up being more arroz con gandules 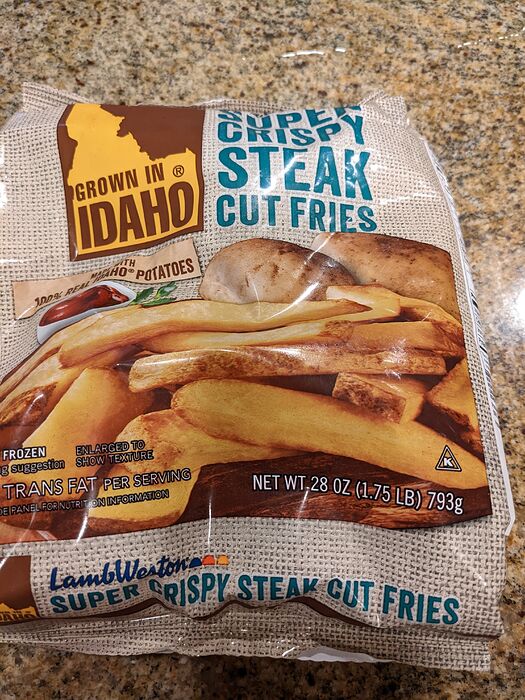 while I try to wrap my head around serving air fried potatoes AND rice!

It’s not so complicated, but this is going to be an all day Project .
Beef is sliced, hopefully across the grain, and seasoned. 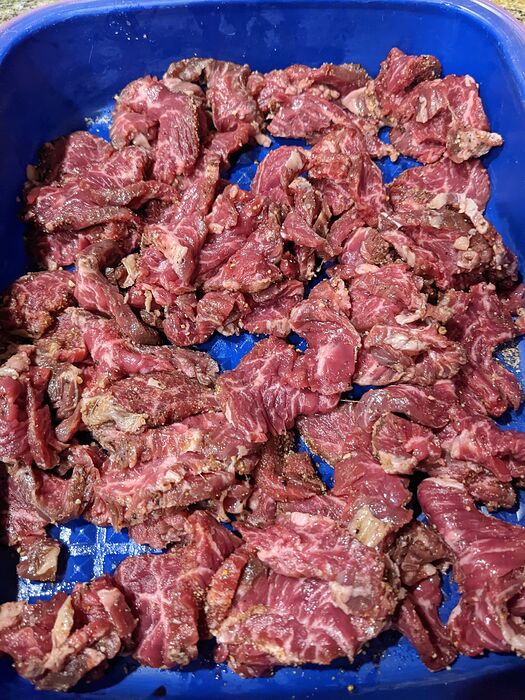 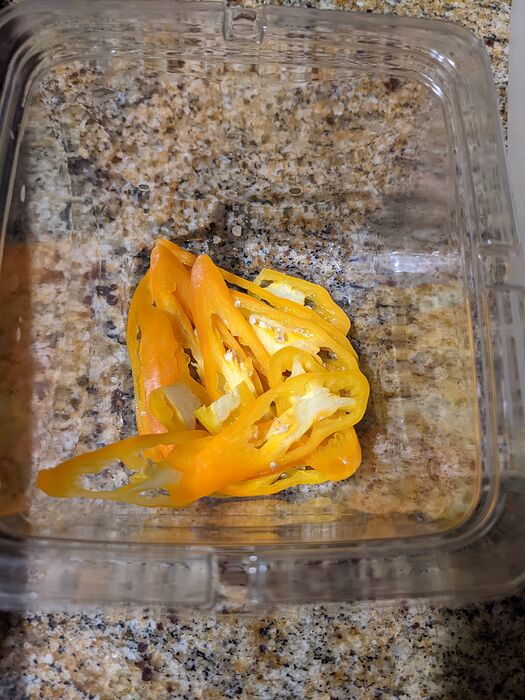 Frozen paste is ready if needed. I have no idea how I will know if it is needed. 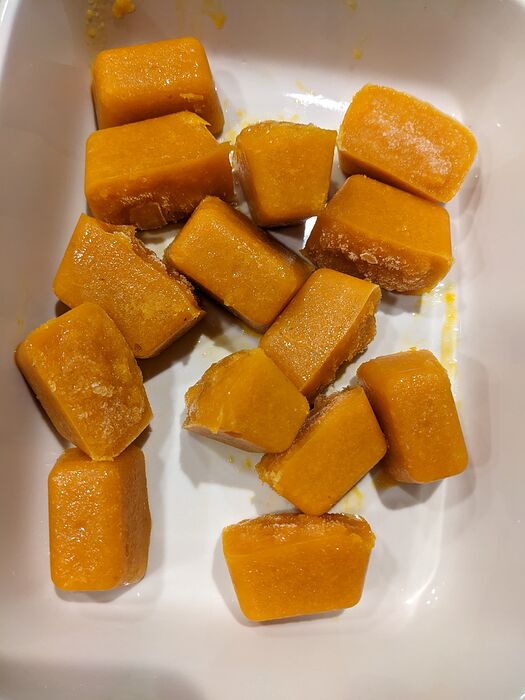 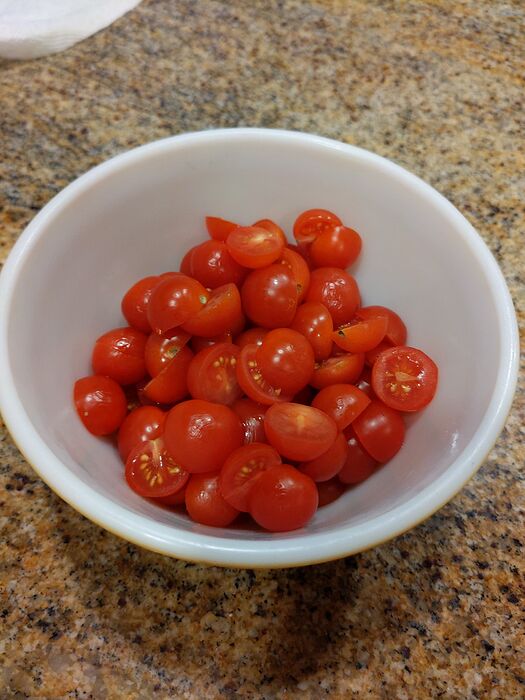 Never have I ever… okay, sometimes.

Gandules are cooking in the pernil stock, for peas and rice. 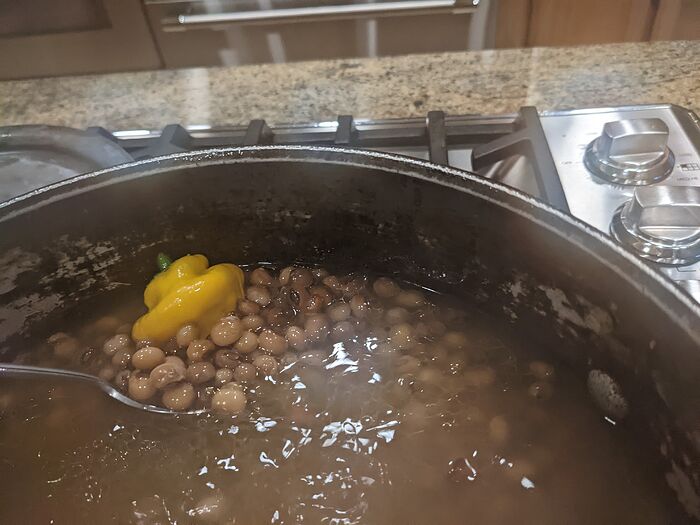 Still trying to wrap my head around the fries. Maybe tommorow. 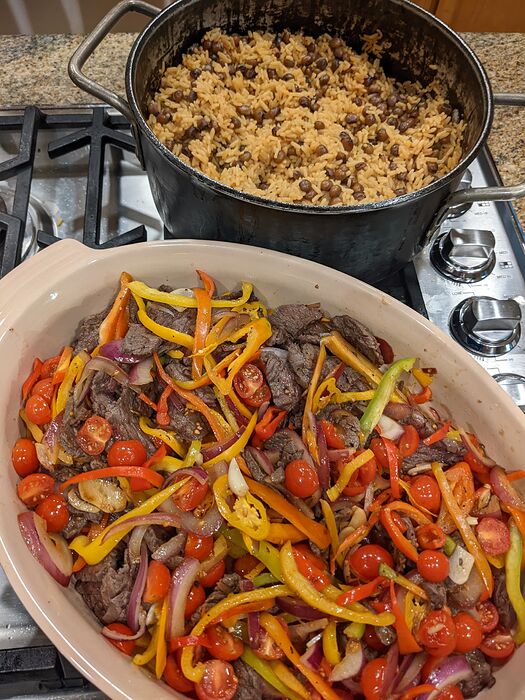 I will try the fries with the leftovers.

Looks great @shrinkrap - please let us know how you liked it! Colorful with a lot of antioxidants too!

I liked it a lot! Tender, perhaps just a bit unctuous (don’t tell the hubs!), and flavorful, with crisp tender peppers and onions.

I forgot soy sauce and vinegar! Adding it now.

I’m sure it would be better if i could say more., but that is my best.

Of course we didn’t eat it all, so I’m hoping it can handle a re-heat,maybe with fries.

It should be able to stand up to reheating well, I think. Yum, enjoy for upcoming lunches!

YUM! Life is too short to avoid unctuous!

I read somewhere, maybe in Cook’s Illustrated, that the best fries were started in cold oil and brought to high/med-high. Been a long time since I made fries, but they can be so good! 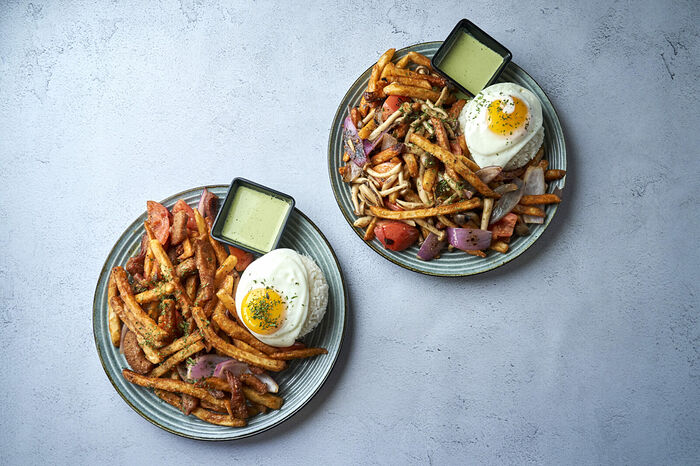 More Than Your Favorite Peruvian Dish: Exploring the Dark History of Lomo...

And where to find the best lomo saltados in Los Angeles and Orange County.