On a recent Saturday morning, we decided to re-explore Kensington Market and try places we hadn’t been to previously. We have had longstanding favourites: Jumbo Empanadas (have been going since she just had a cart near the egg store), Wanda’s (still remember the cranberry, pear, ginger pie that she never makes anymore), Blackbird, Seven Lives, El Trompo, Egg Bae, and Perola’s. We skipped all of these to have room for new experiences.

We started at Fika, which we had heard about for awhile and never had the chance to try. 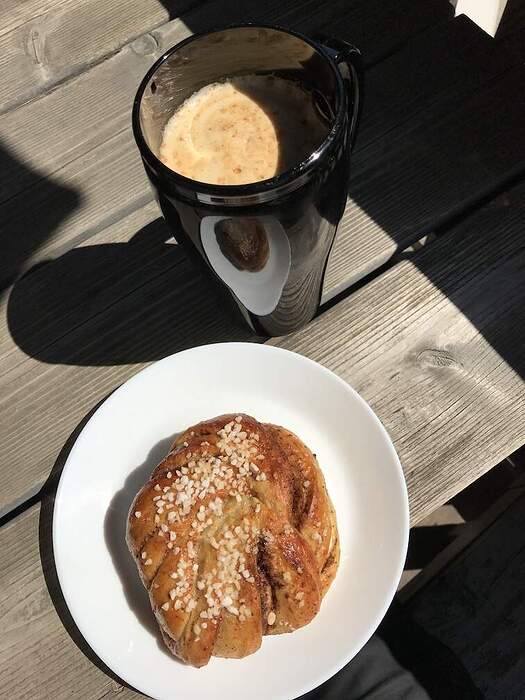 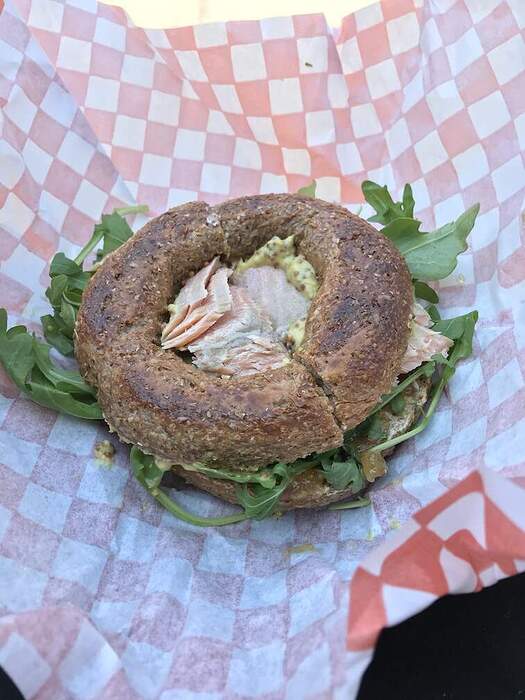 Then we went to Segovia: 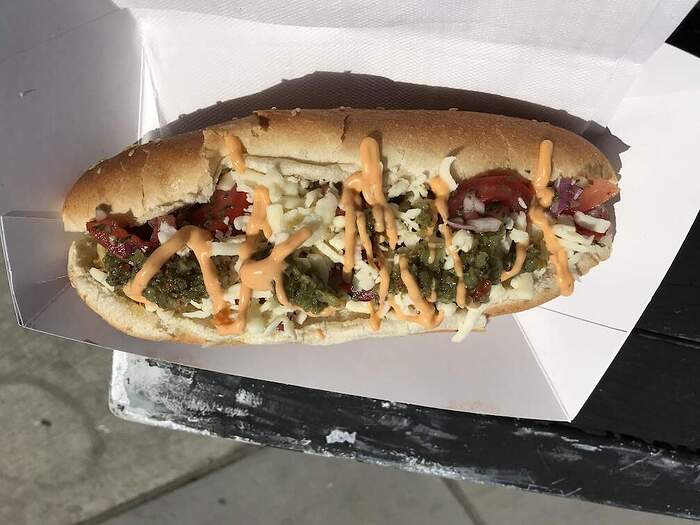 Next up was Chung Chun, which prima covered in another location: 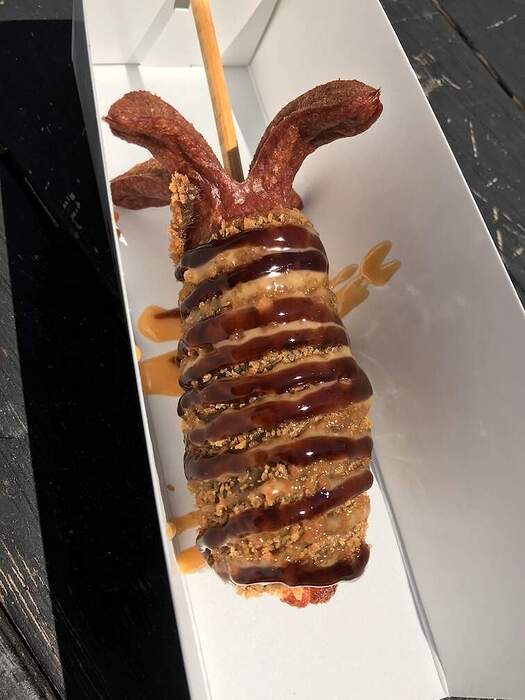 We heard Crumbs had good patties. We got one and upped the starch quotient by getting it wrapped in a coco bun: 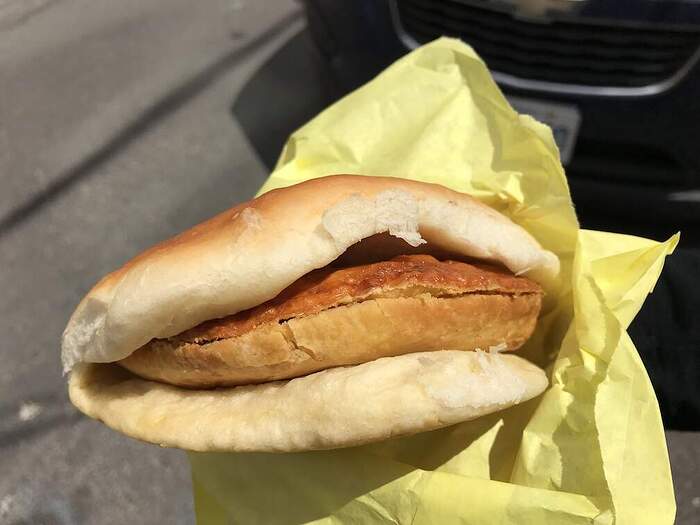 Lastly (we were getting full), we had dessert at Dipped: 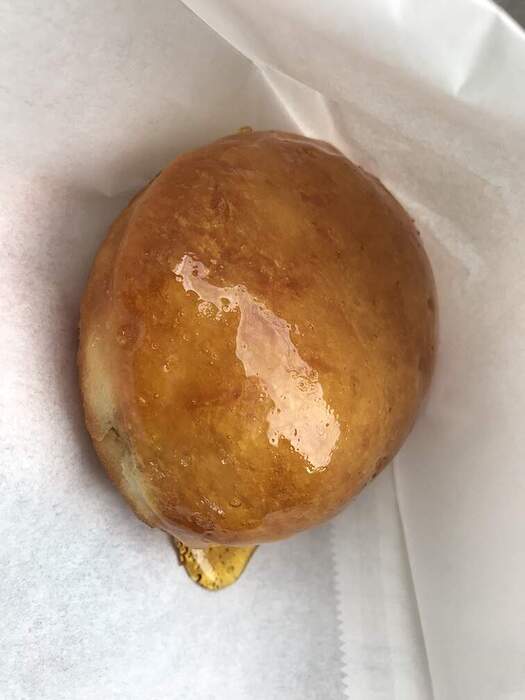 We will head back for another Saturday morning as we skipped the entire Latin food court at 214 Augusta.

My friend likes Fresco’s fish and chips which I haven’t tried.

I visited the Good Egg shop (cookbooks, other books, kitchenware, gifts) yesterday, which has a new location. 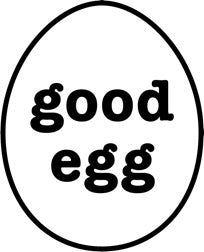 Second Fresco and the Egg shop. I also would like to add Lekker for Liege waffles as probably one if few if not the only spot that has waffles of that style. Blue Banana also has a good selection whimsical items.
Takoyaki Six looks good though I have yet to try.

I stopped by Kensington today.

- I only like it on hot dogs and cheeseburgers), lentil-pear salad with almonds and tarragon, beet-orange salad with feta, and a carrot remoulade.

Seeded bread including nigella from Blackbird, and 2 slices of strawberry shortcake and a slice of Basque cheesecake from Little Pebbles.

Little Pebbles now has some waffles. Not Liège, but interesting looking.

OK I tried Little Pebbles via UberEats and once via Yelp event. Hmm didn’t enjoy both tries. First time was the Square Croissant which more of an Instagram gimmick IMO and the side of desserts being very small portions as well not to mention mainstream grocery store level!

The Basque cheesecake slice was small today. The strawberry shortcake was a regular-sized slice.

I haven’t tried their croissants. ( I don’t eat any croissants- I buy almond croissants for my relatives)

I had the basque cake which is serviceable. Strawberry shortcake was quite bad.

I guess our mileages vary

Let me know if you find a Strawberry Shortcake or Fraisier you like a lot.

Haven’t tried Fresco’s, though thought about it watching people go in and out while we dined at Grey Gardens last summer. Also haven’t tried Little Pebbles. Latin Taste was on our to-try list, but we got full. Takoyaki Six was also a consideration.

Noticed that the Suya Spot has opened a location on Baldwin - we liked their food from the Scarborough location. Pow Wow Cafe is closed until mid-fall as they are out on the road. Also haven’t tried Dirty Bird and Rasta Pasta.

I had some of the strawberry shortcake this morning, and it wasn’t as good as chiffon cakes I purchased in 2018 and 2019. I wouldn’t say it was bad, but it wasn’t worth a detour. The sponge was a heavier denser sponge- which is more similar to some American shortcakes, which can be dense.

Went back for another Saturday morning exploration: 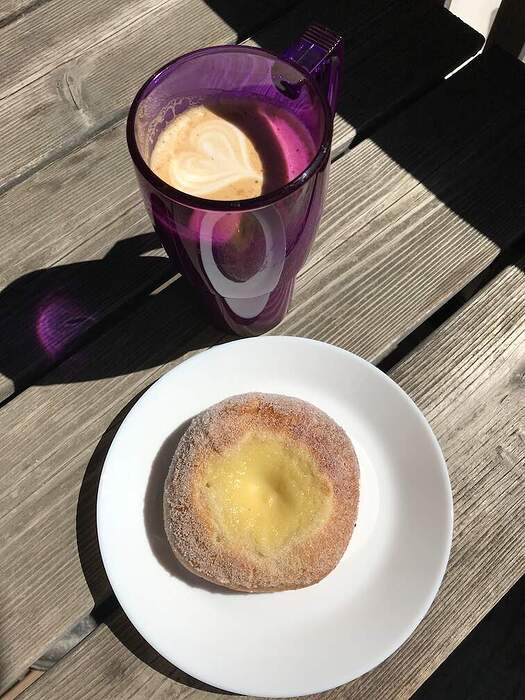 Next on to Patty King: 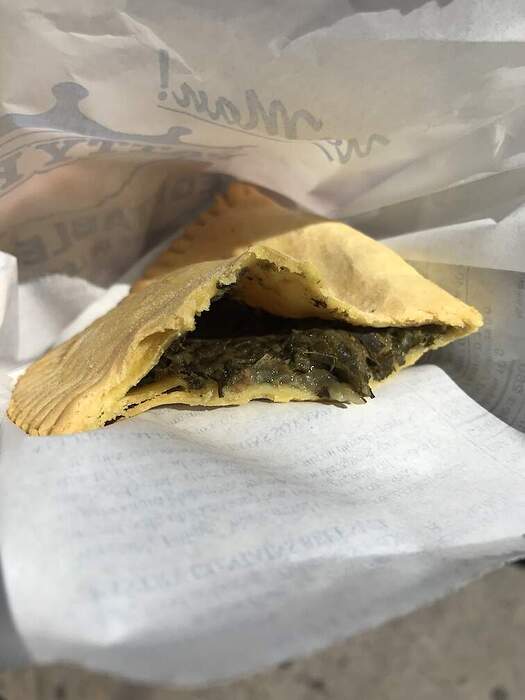 Then took out a chicken tamale from Latin Taste (no pic), a Peruvian place. It was moist and richly flavourful. A really good tamale.

Then sat on the patio of the Film Cafe: 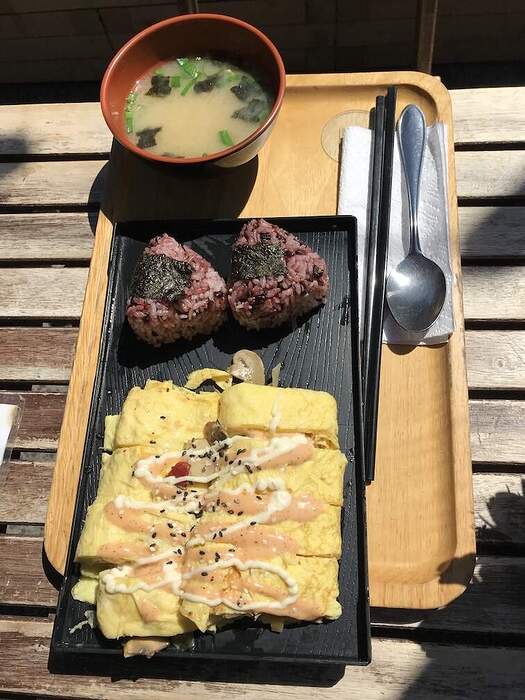 Then we entered the Latin American food court at 214 Augusta: 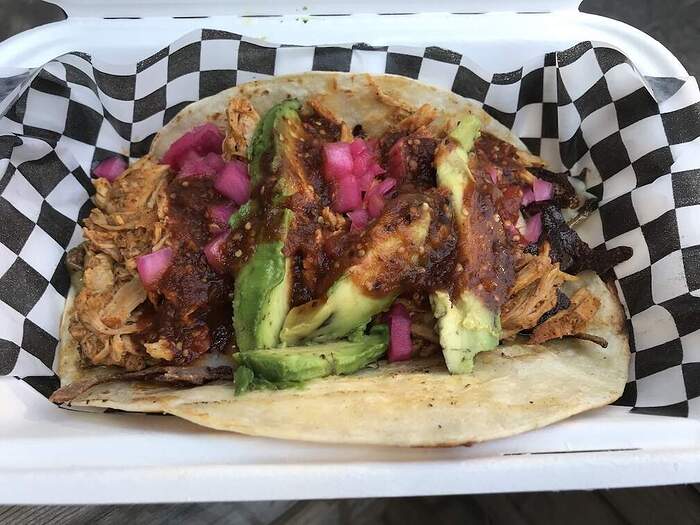 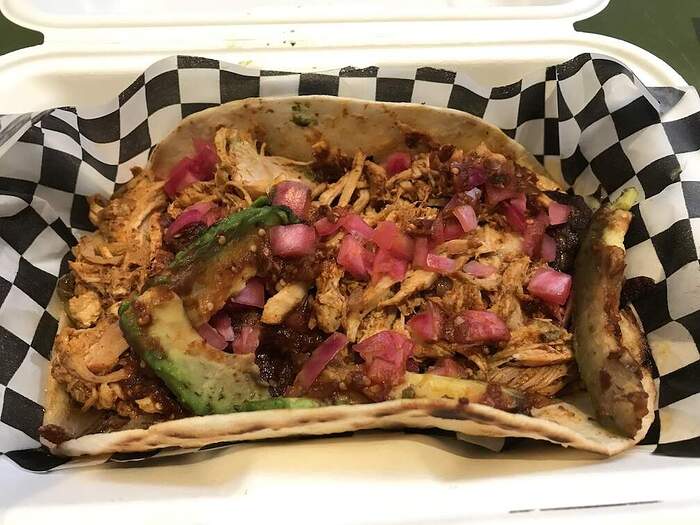 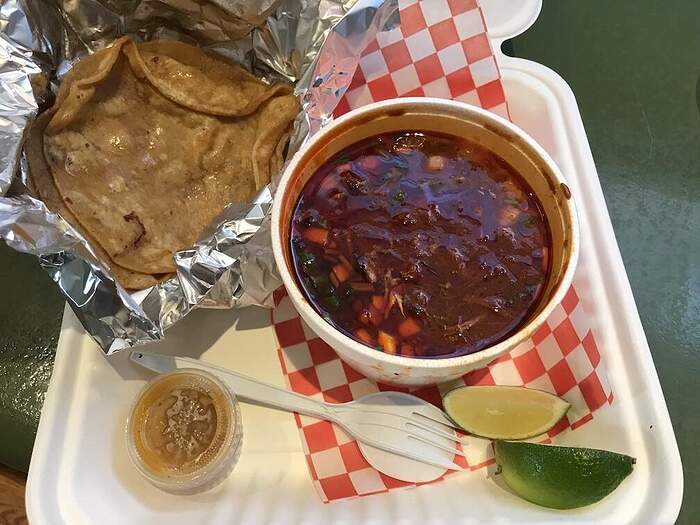 Lastly we took out from Rasta Pasta: 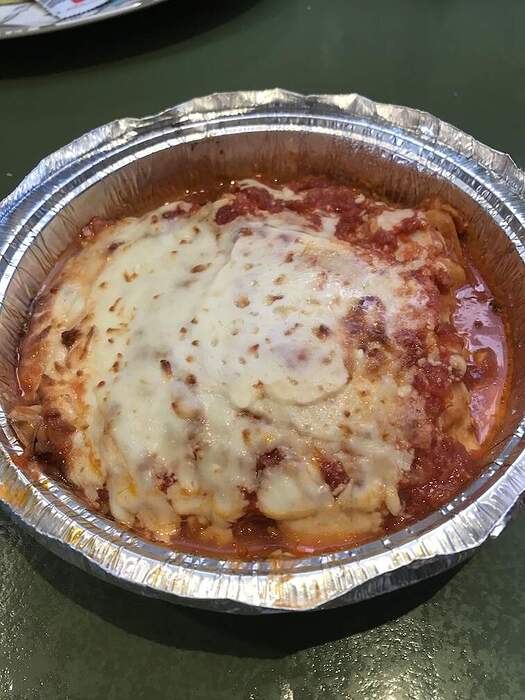 Still have other places to try…

Stopped by Kensington yesterday, for a cardamom latte & Sunshine bun at Fika, and groceries from Sanagan’s, including this Scotch Egg. 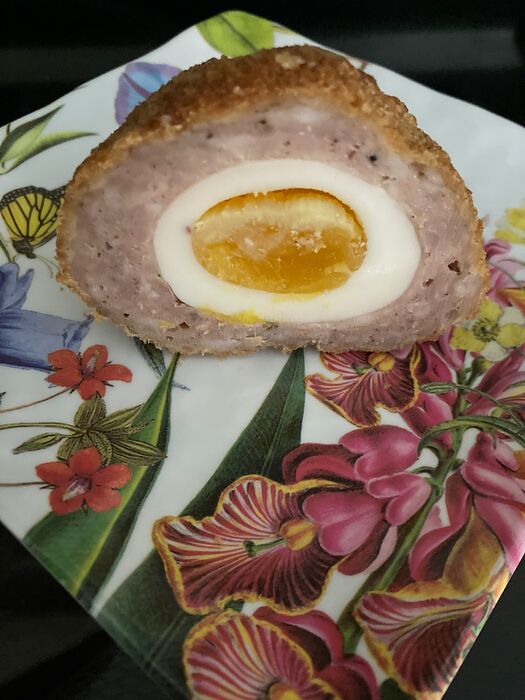 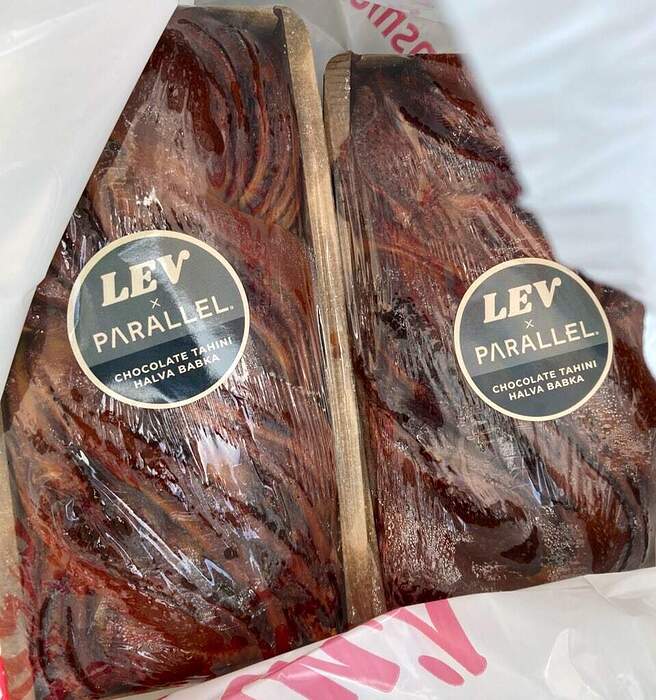 , and a choripan at Segovia.

Segovia’s choripan ($8 plus tax- cash or debit) was delicious. It looked like this, with more tomatoes on top. I ordered mine medium-spicy. 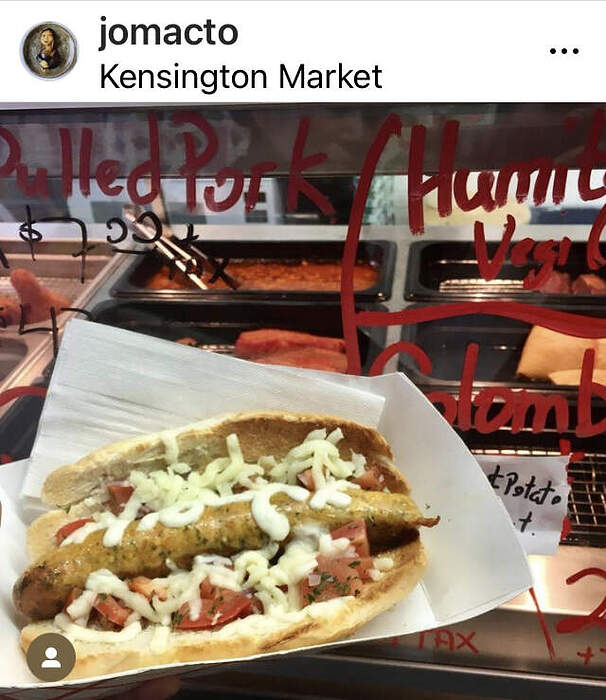 Glad you liked the choripan. We loved it also.