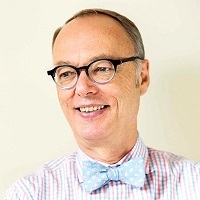 Christopher Kimball’s new project is Milk Street Magazine, named for the Boston address of his new venture, which also includes a cooking school and media studios. The magazine has no ads, a global outlook and color photography for recipes and techniques often tweaked by the staff to improve or simplify them. He is also working on a new television show to be carried by American Public Television.

Christopher is the founder and the former editor, and publisher of America’s Test Kitchen, Cook’s Illustrated and Cook’s Country magazines, and former publisher of the Cook’s Magazine. He is the author of The Cook’s Bible, The Yellow Farmhouse Cookbook, Dear Charlie, The Dessert Bible and Fannie’s Last Supper.


Hungry Onion Drooling Q&A is a place where you can interact with your favorite cookbook authors, food critics and chefs and ask them in-depth and thought-provoking questions about their areas of expertise. It is a great venue that lets us explore the interviewees’ thought processes, how they approach their professional work, and what drives their passion.

Got a question for Christopher? Click ‘Reply’ and ask! Christopher will join us on Dec 7


Don’t forget to also check out our great Q&A lineup as well as our community members’ knowledgeable discussions on restaurant recommendations and cooking techniques!

1- Register a user account to ask questions. Its free.

2- One question per post. More than one question? Put each question in its own reply.

Highlight the text. In this example- “My favorite…eaten it”. Then click the grey Quote Reply button.

Thank you for doing a Q&A, Christopher! It’s been cool to hear you embrace Yotam Ottolenghi’s cookbooks on the ATK Podcast. Ottolenghi’s recipes are revelatory and tasty, but often require time-consuming flourishes or obscure ingredients. What lessons of Ottolenghi’s cooking do you think are best suited for the busy home cook, and are you incorporating into your new ventures?

Any chance you can entice Bridget Lancaster to join you on some podcasts for Milk Street? Will miss her so! But I’m enjoying the podcast so far anyway. Good luck!

Hi Christopher, thanks for doing the Q&A! I guess there are certain things you won’t be able to comment on the ongoing case. What would you like to say about it to your readers and viewers/ neutrals?

I have heard that Milk Street Kitchen will take on a more global focus, and I have read your first issue. What is the direction you want to over time take your new venture to? Best of luck with it!

I watch your shows on PBS. What prompted your original decision to do the show on PBS, versus other food/ cooking media outlets?

There are a couple of alum from your previous work on the Q&A series here- Mark Bittman and J Kenji-Lopez Alt. How’s it like working with you?

Hello! What are your favorite stores/shops/vendors?

Have you ever tweaked a traditional recipe and gotten a lot of pushback from readers/ viewers who prefer the traditional take? If so, any tricks you use to ‘ease’ people into being more receptive?

You have a degree in primitive art, why eventually a career related to food?

Christopher, since you are a hunter, what is your favorite game meat and how do you prepare it?

Do you still raise pigs? Can you tell us the difference between the tastes of store-bought pork and pork that comes from small family farms? (I don’t have access to the latter.)

Since you just went to Thailand, are there any tricks in the Thai cooking repertoire that are useful for American cooks?

What are some of the most memorable and spectacular recipe failures in your career?

Does the recipe testing process change at Milk Street, with Milk Street being a new venture?

The Internet, food blogs, homemade cooking videos, etc. have been popular for more than a decade, and we have food-themed social network groups, Instagram, chef twitters. What are the good and bad things these new technologies brought to home cooking, and how do they impact traditional cooking media ventures, especially a new one like yours?

Since Milk Street is going in the direction of incorporating techniques and flavors from other countries into American cooking, do you think readers/ viewers who are familiar with you, and are used to seeing you tackle classic American recipes, may be more hesitant?

The New York Times article said you were letting go the bowtie for Milk Street. I haven’t seen that happened. Are you really going to do retire the bowtie after all these years?

You obviously have strong opinions about food, the cooking and recipe testing process. Do episodes like your comments on Gourmet Magazine affect the way you present these opinions?