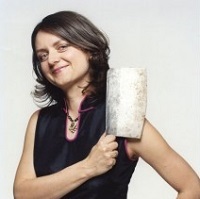 Fuchsia Dunlop is a cook and food-writer specialising in Chinese cuisine. She is the author of Land of Fish and Rice: Recipes from the Culinary Heart of China (a collection of recipes from the Jiangnan or Lower Yangtze Region in eastern China), the award-winning Every Grain of Rice: Simple Chinese Home Cooking; Shark’s Fin and Sichuan Pepper: A Sweet-Sour Memoir of Eating in China, an account of her adventures in exploring Chinese food culture; and two critically-acclaimed Chinese cookery books, Revolutionary Chinese Cookbook, and Sichuan Cookery (published in the US as Land of Plenty).

Fuchsia’s work has appeared in publications including The Financial Times, Lucky Peach, Saveur, The New Yorker, Observer Food Monthly and Gourmet. She is a regular guest on radio and television, and has appeared on shows including Anthony Bourdain’s Parts Unknown (2016), CNN’s On China, Gordon Ramsay’s The F-Word, NPR’s All Things Considered and The Food Programme on BBC Radio 4. In the United States, she has won four James Beard awards, including International Cookbook (2014) for Every Grain of Rice and three for articles published in Lucky Peach and The Financial Times. She has been nominated/shortlisted for four additional James Beard Awards. She was named ‘Food Journalist of the Year’ by the British Guild of Food Writers (GFW) in 2006, and has also won GFW awards for three of her books. Her memoir, Shark’s Fin and Sichuan Pepper won the IACP Jane Grigson Award in the US, and the GFW Kate Whiteman Award for Food and Travel in the UK.

She is a consultant to the popular Barshu Sichuanese restaurant in London, as well as its sister restaurants Bashan and Baozi Inn, and has also consulted and taught Chinese cookery for companies including Williams Sonoma, Sharwoods and Marks and Spencer. Fuchsia has spoken and cooked at conferences and events in China, Barcelona, California, New York, Sydney and Singapore, and as part of the Transart festival in Bolzano, Italy.

Fuchsia grew up in Oxford, and studied at Magdalene College, Cambridge University, Sichuan University, and later at the School of Oriental and African Studies in London. She first became interested in China through a sub-editing job at the BBC, which led her to take evening classes in Mandarin, and eventually to win a British Council scholarship to study for a year in the Sichuanese capital, Chengdu. She speaks, reads and writes Chinese.


Hungry Onion Drooling Q&A is a place where you can interact with your favorite cookbook authors, food critics and chefs and ask them in-depth and thought-provoking questions about their areas of expertise. It is a great venue that lets us explore the interviewees’ thought processes, how they approach their professional work, and what drives their passion.

Got a question for Fuchsia? Click ‘Reply’ and ask! Fuchsia will join us on Nov 29.


Don’t forget to also check out our great Q&A lineup as well as our community members’ knowledgeable discussions on restaurant recommendations and cooking techniques!

1- Register a user account to ask questions. Its free.

2- One question per post. More than one question? Put each question in its own reply.

Highlight the text. In this example- “My favorite…eaten it”. Then click the grey Quote Reply button.

A couple of months ago I tweeted you about my meal at the reopened Tasting Court in Hong Kong, the private kitchen that you and Susan Jung dined at earlier in the year. In my meal, there was an extensive use of huadiao wine across multiple dishes. They highlighted that they used 25 year huadiao for example, for the crab noodle dish (versus 10 year huadiao in The Chairman, a restaurant where some of the Tasting Court staff came from, I believe). Given huadiao is used extensively in Jiangnan cooking, do you think there is a substantial differences when extensively aged huadiao is used in cooking, or high-end cooking? At what age does the age become overkill?

Thoughts on the Chinese restaurant scene in London- varieties, ingredients, techniques? What are the Chinese places you enjoy eating in the capital?

Firstly thank you so much for your books, they are wonderful and I have learnt so much!

You’ve mentioned there are a lot of Chinese ingredients you can’t buy here. If you had space in your suitcase to bring back only one thing from China, what would it be?

Most of my otherwise open minded friends can’t get past their “yuk” factor and won’t try foods westerners don’t normally eat (e.g. pigs ears, chicken hearts, trotters, century eggs, etc). I’m really glad I don’t have this reaction, as I’ve come to love the textural variety from these sorts of ingredients.

I’m guessing you’ve probably encountered the same reaction from people you know. Do you have any tips for introducing people to unusual ingredients, or do you find it best just to stick to “safe” options when cooking for others?

Thank you so much for inspiring us to cook, travel, and learn more about Chinese culture!

It must be challenging to leave out some beloved recipes to keep your books concise! Are some of your recipes more popular in one country or another (e.g., UK vs. US), and if so which ones and has that impacted which dishes made the cut into Land of Fish and Rice?

I tend to follow recipes to the letter, so I’m grateful when you offer up alternative ingredients or say that it’s cool to skip a meat ingredient to make a dish vegetarian. Based on tips from others or your own experimentation, are there any post-publication variations to your Every Grain of Rice recipes that you’d like to share with your readers? (if it’s not too early to hear new Land of Fish and Rice variations, those are welcome too!)

After reading your reportage on the private kitchen Tasting Court and some members posting their meal, I got interested and on my last trip in Hong Kong, I was able to secure a table for a dinner. My meal was quite similar to @sck 's dishes, he has pointed out, at least 3 dishes used the aged wine, I noticed in other dishes too, the chef love to emphasis on bitter taste (such as the use of the root Dong Guai). What do you think of bitterness , is it an important taste in Chinese cooking? Since you travel widely, is there any regional cooking embraces bitterness (in Chinese or other cooking)?

Can you name the restaurants in China that are the most impactful in shaping your understanding of cuisines in China?

I would love to go travel and eat in China, but the food scandals in the news concerned me, e.g. gutter oil, rotting meat. From your experience eating there, are these incidents widespread or isolated? Should I even be concerned, or is there precaution one can take?

What other regional Chinese cuisines, or other cuisines, are you interested in exploring at some point during your writing career?

Many people in the US think Chinese food is only chow mein, kung pao chicken, hot and sour soup, fortune cookies, etc. I am sure it is intimidating to people unfamiliar with Chinese cuisines to figure out how and what to order. Besides introducing them to your books that make Chinese cuisines accessible to the non-native speakers, how do you nudge people to get out of their comfort zone, recognize the vastness of the Chinese culinary landscape and explore more?

China has undergone vast changes in the last 20 years. What are the observable changes in the cuisines during this period. And specific to restaurants, how has the dining scene evolved?

Is there any regional Chinese cuisine that is not as well known in the U.K. or U.S., but is a hidden treasure just waiting to be unearthed?

What’s your next book project?

Is it safe to eat street food in China? If there is no recommendations, how do you choose your food in the stall?

I think you started in the Sichuan area as a BBC analyst. How did you decide to write about Sichuan, Hunan, and Jiangnan cuisines in that order? Is it the flavor profile, public demand, or something else?