We had an excellent dinner at Fin Raw Bar and Kitchen. We haven’t been here in over a year since they got their liquor license. However, I just found out that they allow you to bring your own wine on Sundays with no corkage fee. On Friday and Saturday nights they charge a very reasonable $20 corkage fee.
We both had a sensational 7 spiced big eye tuna with an addictive side dish of soba noodles with stir fried vegetables in a soy and scallion vinaigrette. This has to be one of my favorite seafood presentations. It has a nice little kick to it. 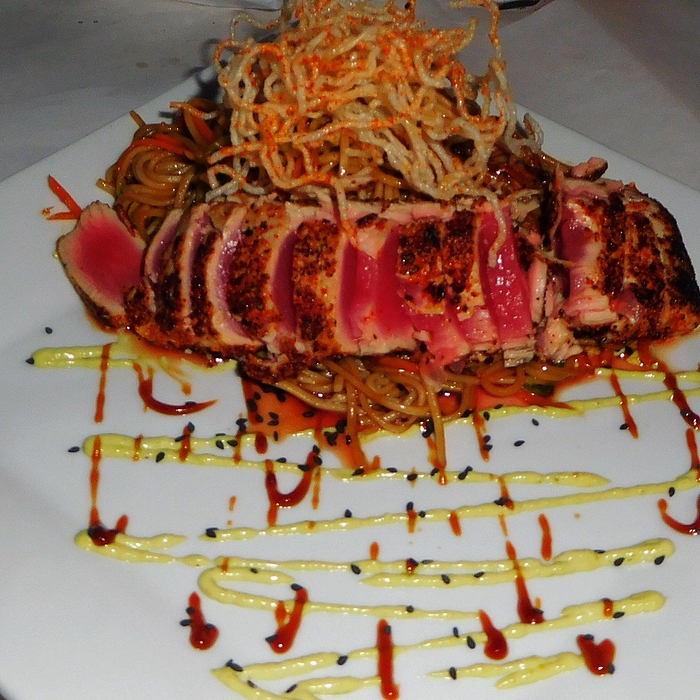 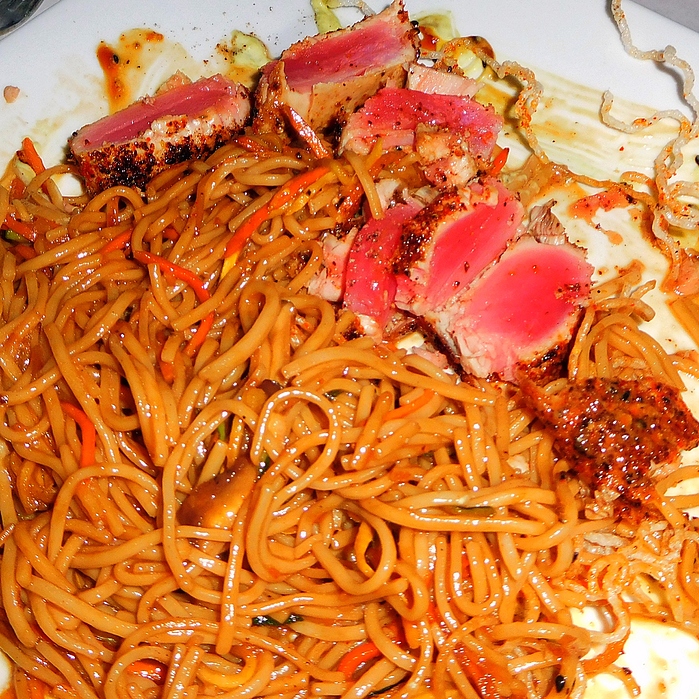 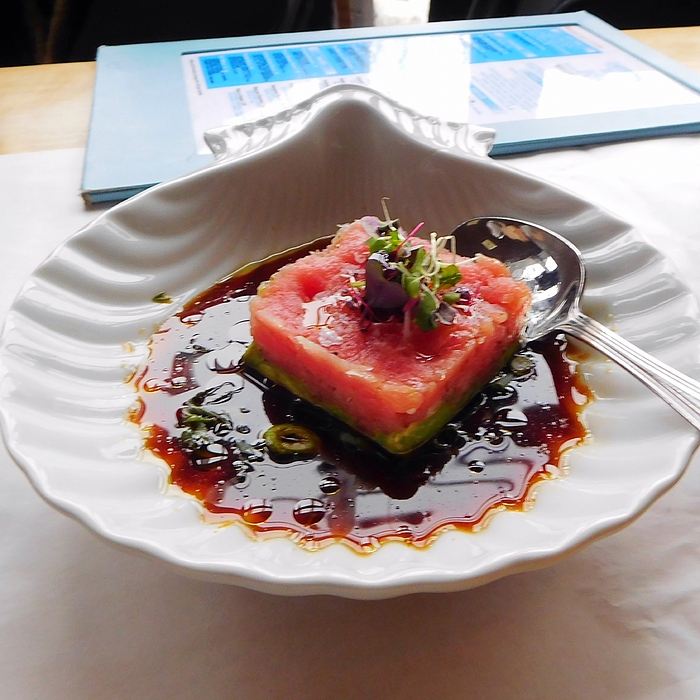 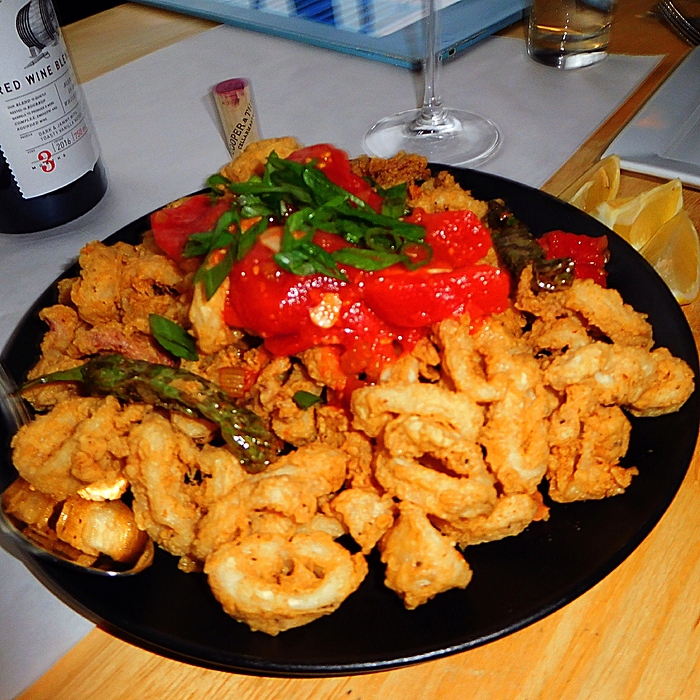 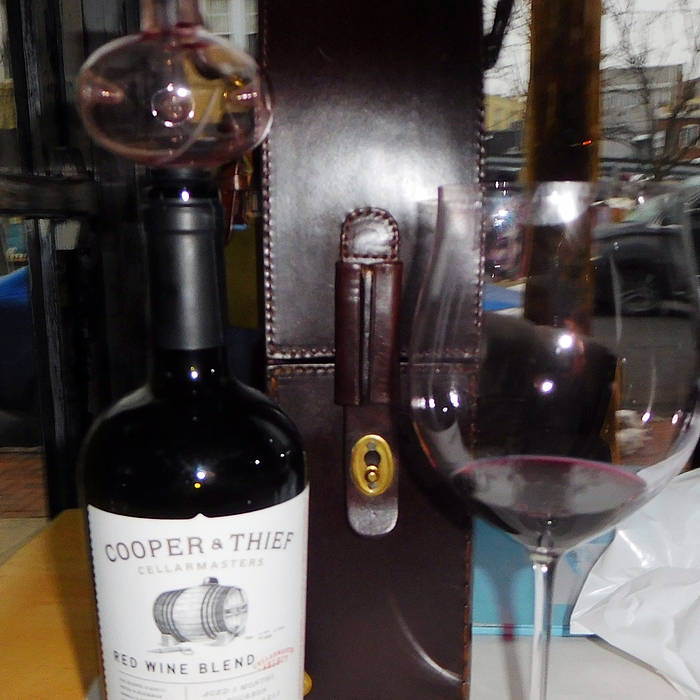 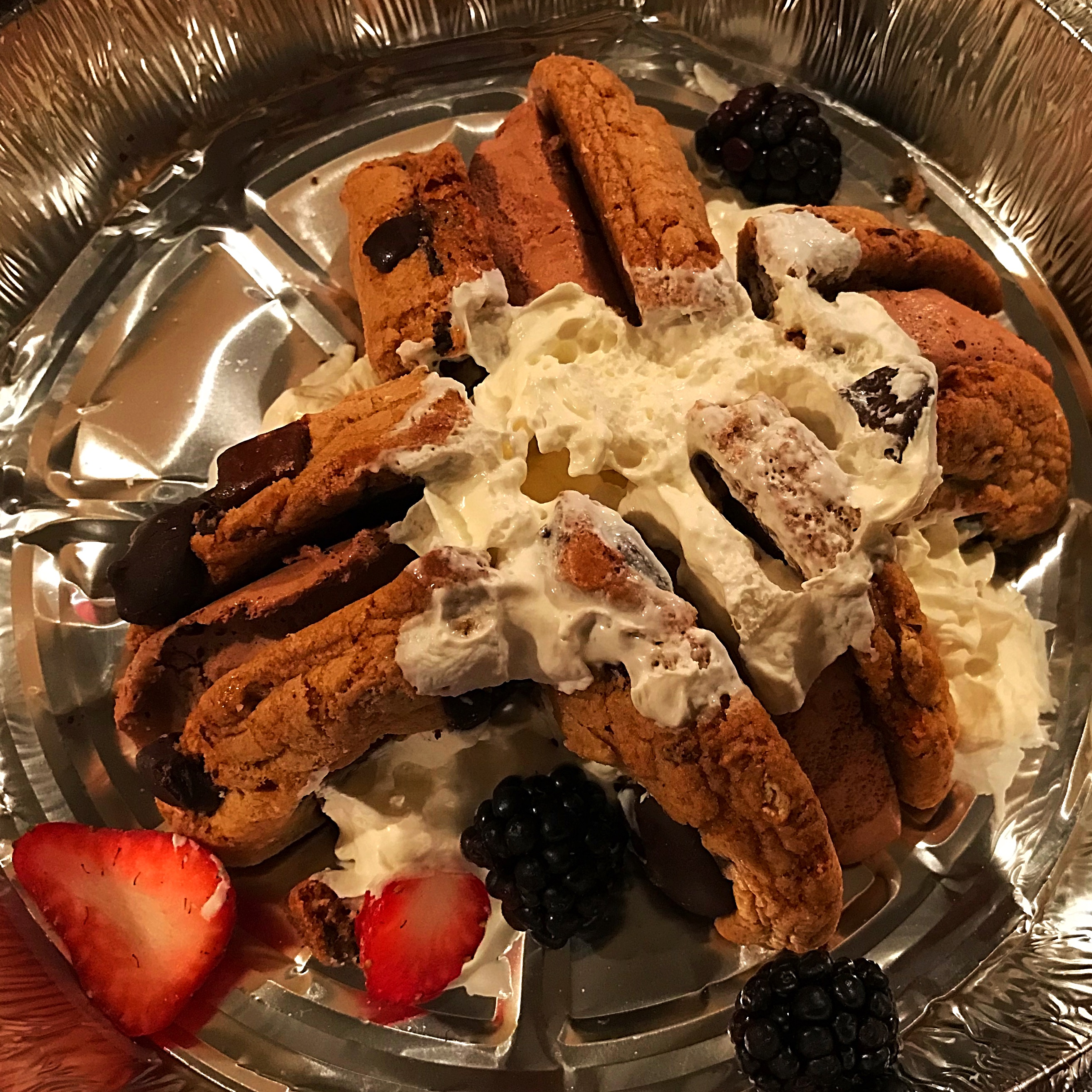 Own3d! That looks great. I love bigeye! I wonder if they would do that tartare with bigeye for you?

The tuna was awesome. I’m not sure if they would do the tartar with the big eye. You might have to request it ahead of time. They currently make the tartar with ahi tuna.

Yeah I saw the coloring and you know it is yellowfin. I think bigeye is a little more flavorful imo and I like the higher fat content. I know you know some chefs so maybe give it a shot

…and invite me lol

We had another excellent dinner at Fin Sunday night. We started off with a semolina crusted crackling calamari salad with radicchio and frisée, in a honey lime balsamic dressing. Below is a split portion. We also shared a lobster and shrimp spring roll with a spicy mustard dipping sauce and an order of blistered shishito peppers with sea salt and lime and a soy dipping sauce. For entrees Mrs. P had lobster and shrimp Shanghai style in a ginger curry sauce with sautéed baby spinach, and crispy shoestring potatoes. I had the awesome 7 spiced big eye tuna that I had last month. It all went great with Le Plan Cotes Du Rhone. We took home a chocolate ice cream sandwich for dessert. 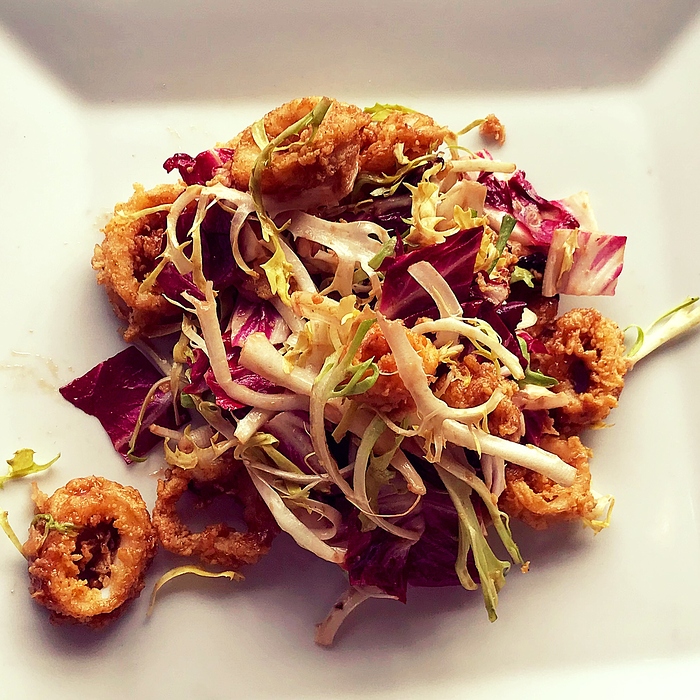 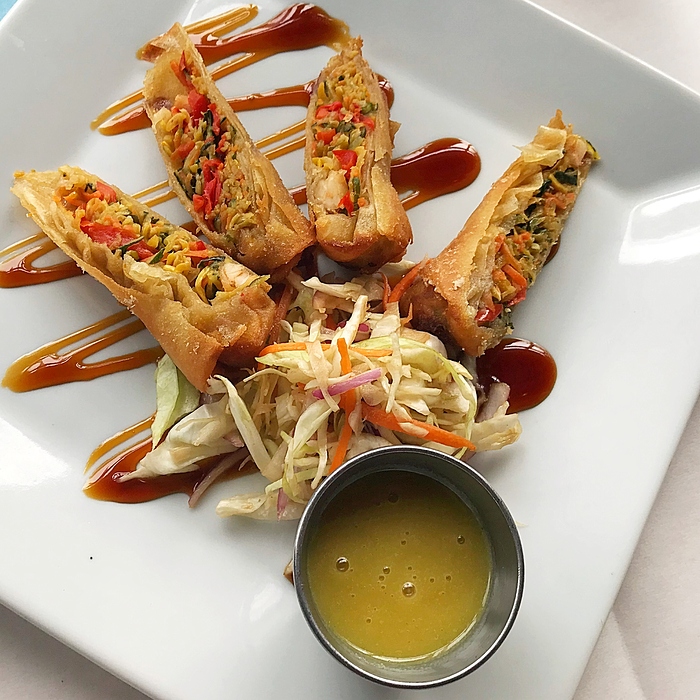 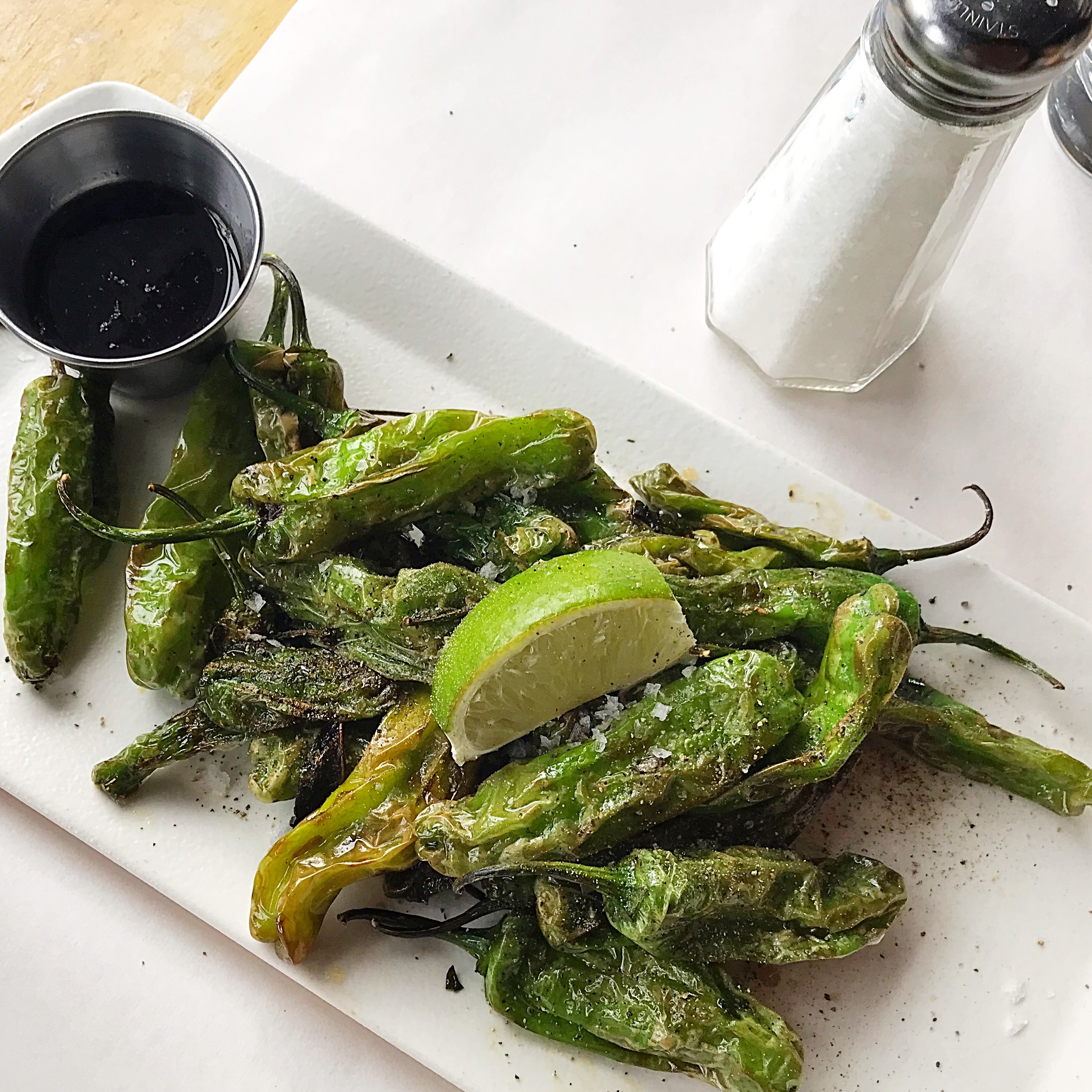 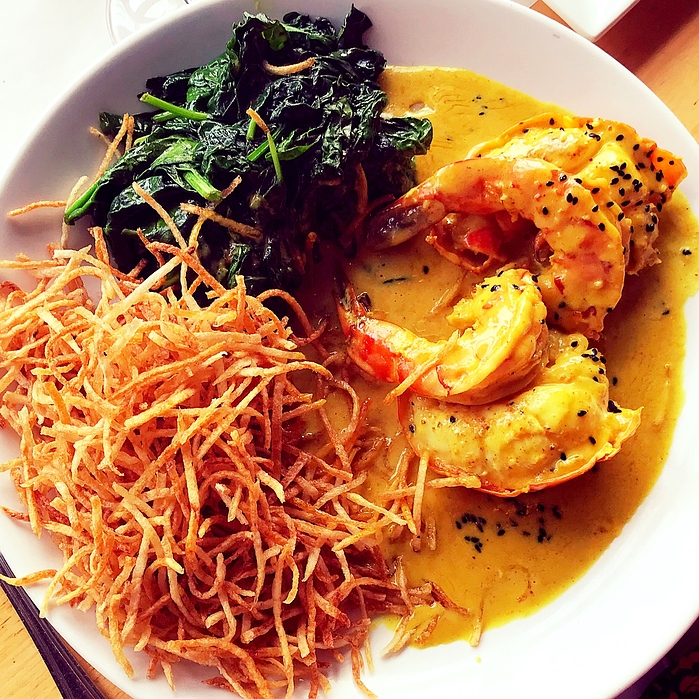 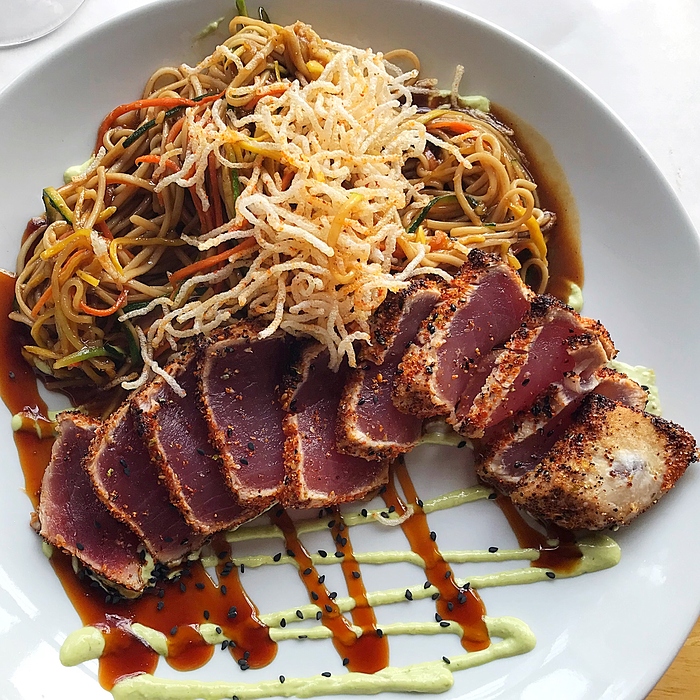 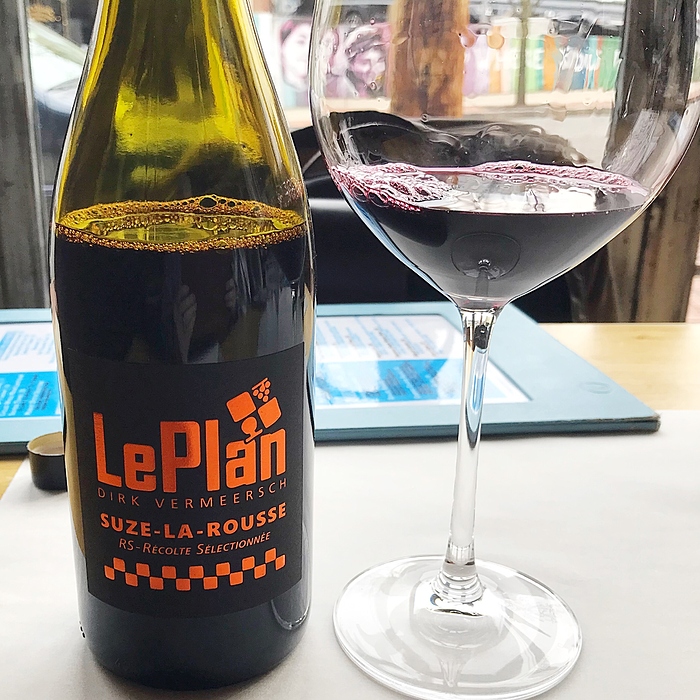 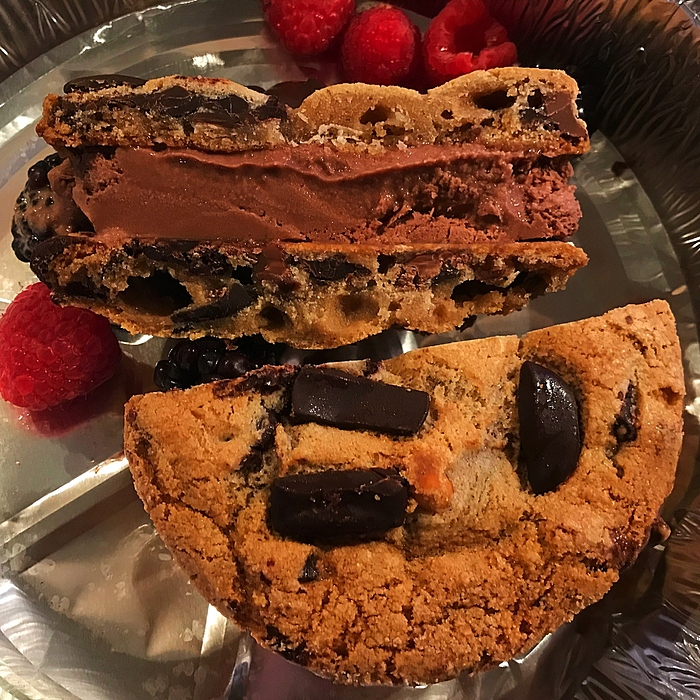 We had another excellent dinner at Fin. Below is a link to the details and pictures in the main WFD thread.

What's for Dinner #46 - the June Is Busting Out All Over Edition - June 2019 Cooking, Cookbooks, Ingredients

We had an excellent dinner out at Fin Raw Bar and Kitchen in Montclair. We shared several appetizers of crispy edamame potstickers with scallion aioli and a citrus ponzu dipping sauce; Yellowfin ahi tuna tartar with avocado, scallions, in a citrus ponzu sauce; crispy calamari with shishito peppers, and chunky tomato relish. For entrees Mrs. P had the Lobster and shrimp Shanghai in a ginger curry sauce, with sautéed spinach and shoestring potatoes. I had a beautifully charred 24 ounce wood gril…

We had another great dinner at Fin. Below is a link to the details and pictures.

We had another excellent dinner at Fin Raw Bar and Kitchen in Montclair. We shared several appetizers including steamed bao buns containing slow braised short ribs and spicy kimchi. It had a nice kick to it. The bun was a little hard, so I just scooped it out of the bun. Less calories

We also had an excellent special of Thai green curry mussels, with coconut milk, ginger, basil, and toasted peanuts. Our 3rd appetizer was crispy spring rolls with shrimp and lobster, with …

We went to Fin in Summit for the first time today. It is recently under different ownership than the one in Montclair. The one in Montclair has been going downhill over the last year or so. The owners have been focusing on the Crosby next door, and the quality of the food has suffered. A few people have recommended the one in Summit, and I’m glad they did. The 2 restaurants have similar menus, but the execution and service is much better at Summit (like it used to be at Montclair).
We shared a couple of appetizers of swordfish tacos with guajillo marinade, pineapple pico de gallo, radish, and avocado cream, and Asian shrimp bao buns with sweet Asian chili sauce, pickled onions, and chili peppers. For entrees I had the bronzed Atlantic swordfish, with avocado, cucumber, tomato, onion, lump crabmeat, with a cilantro lime vinaigrette. Mrs. P had the 7 spiced big eye tuna, soba noodles, stir fried vegetables, in a soy and scallion vinaigrette. For dessert we had an excellent chocolate retro cake - mini bundt came with warm vahlrona chocolate center, vanilla ice cream, and raspberries. It all went great with a 2016 Emilio Moro Tempranillo. Thank you for the recommendation @Barca! 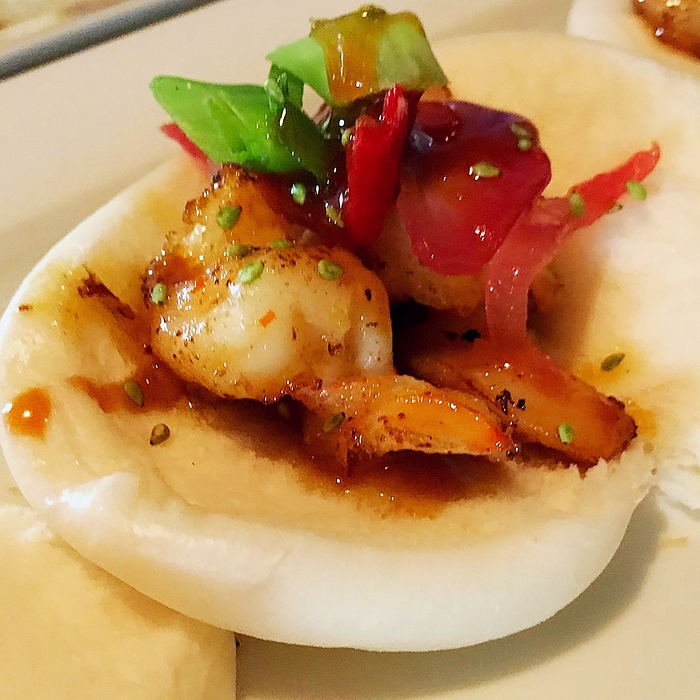 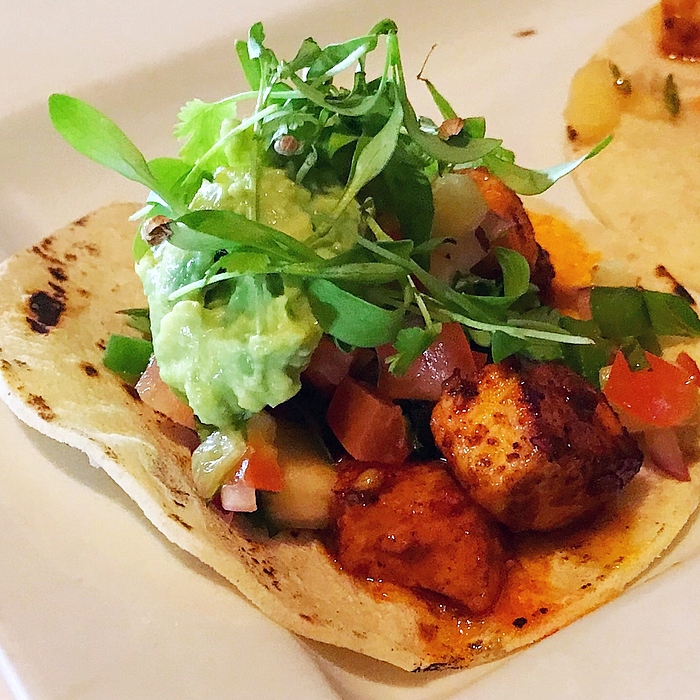 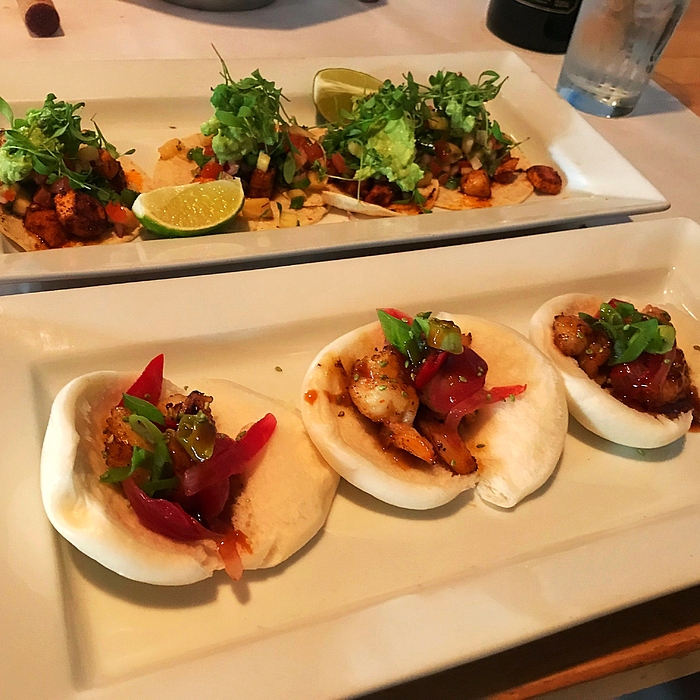 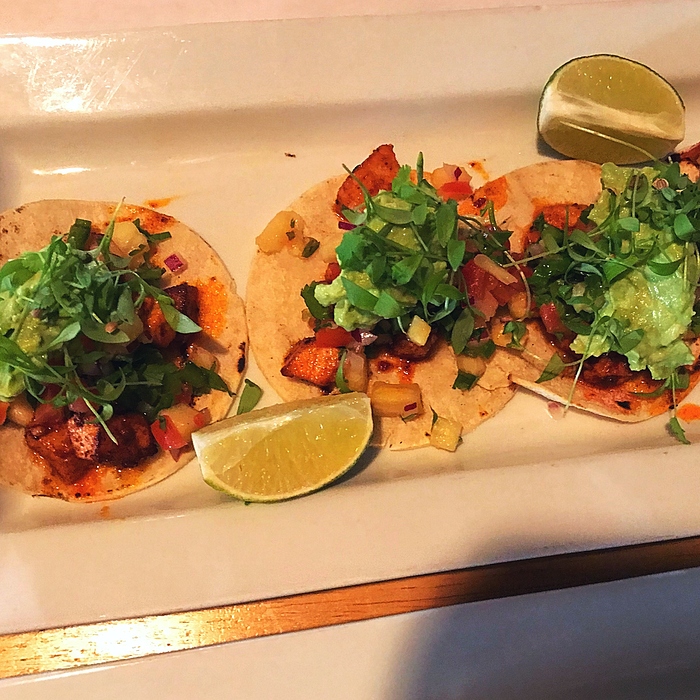 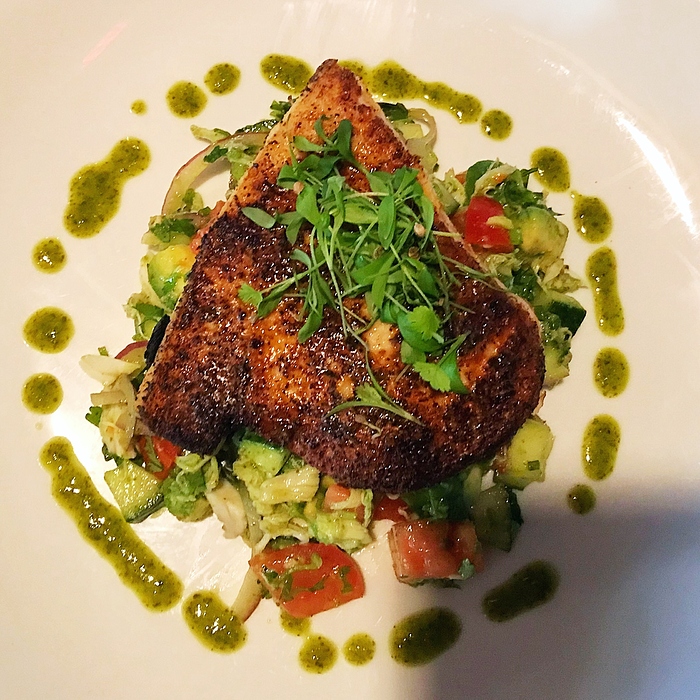 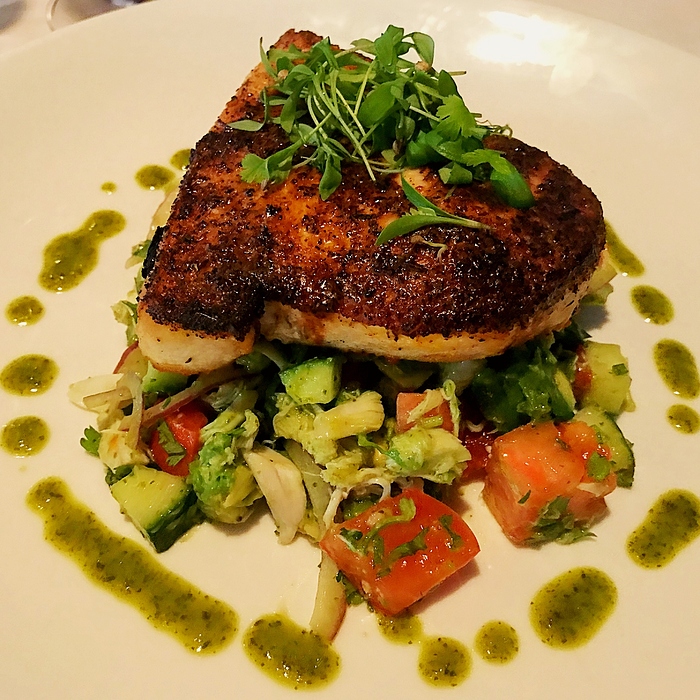 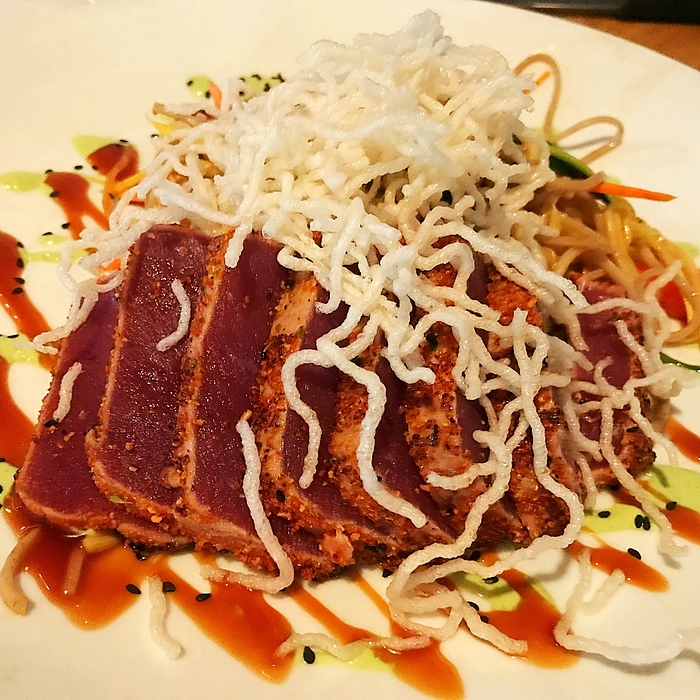 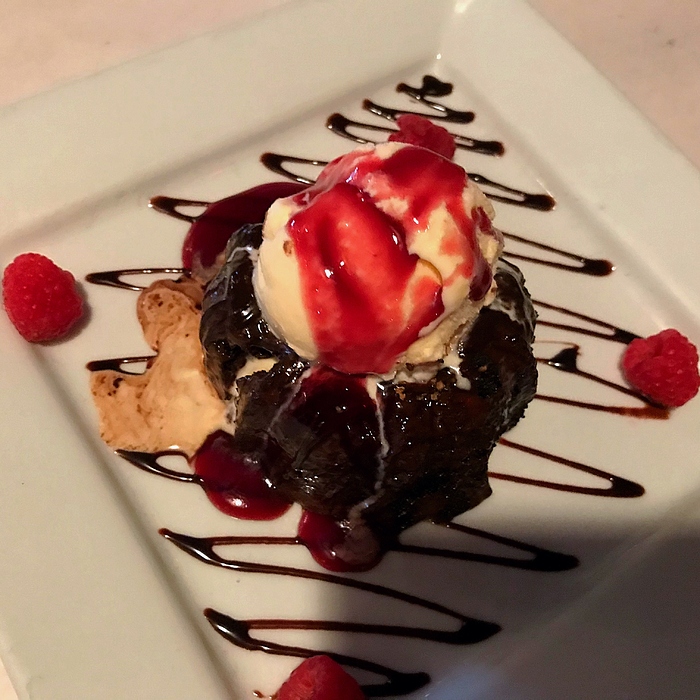 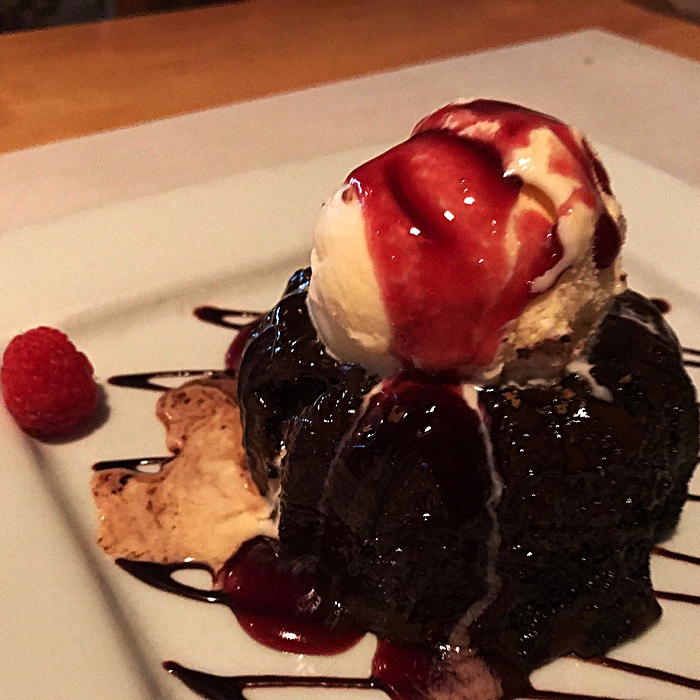 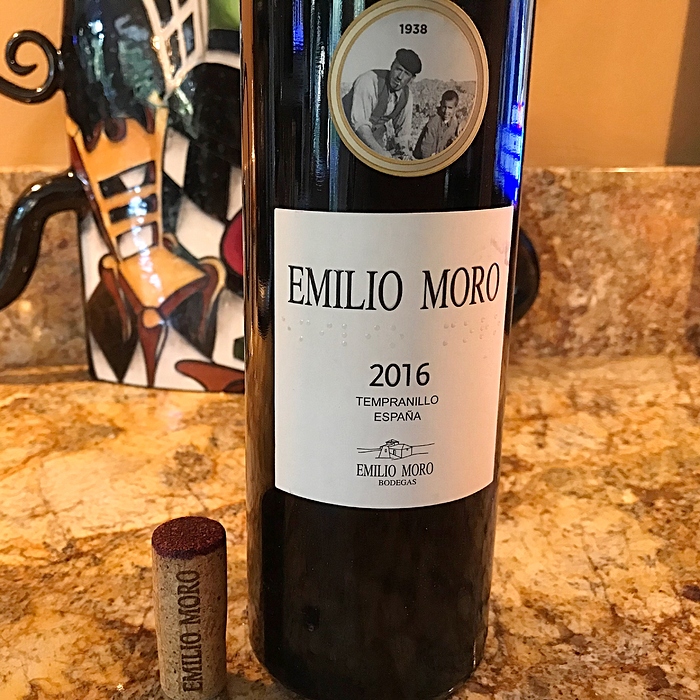 We had another great dinner at Fin in Summit. Besides the awesome 7 spice tuna and chocolate retro cake to go I had a special of barramundi cilantro lime shrimp and roasted Brussels sprouts with crispy applewood smoked bacon. We also had blue shell mussels with Thai coconut sauce and potato sticks, as well as swordfish tacos. 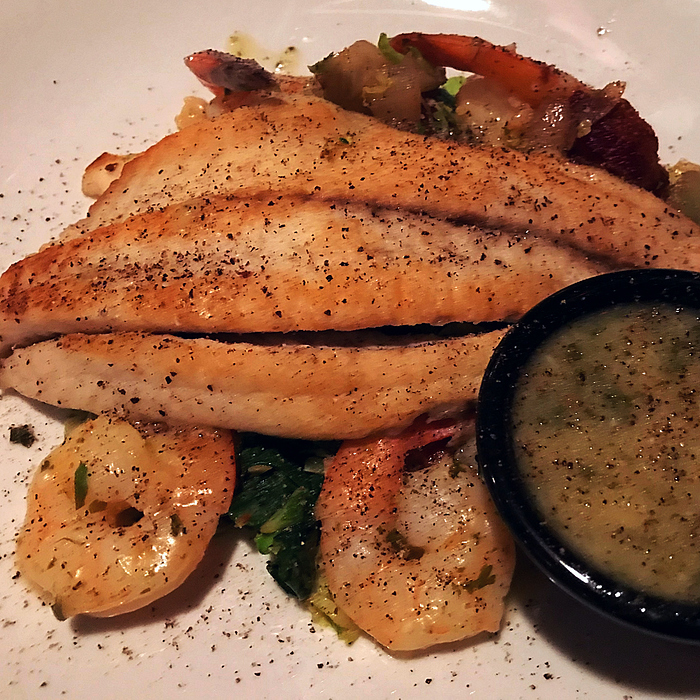 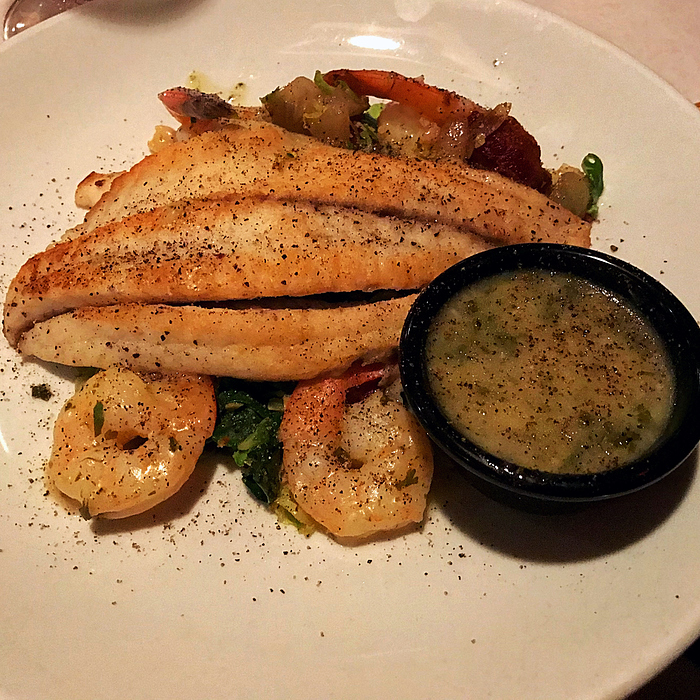 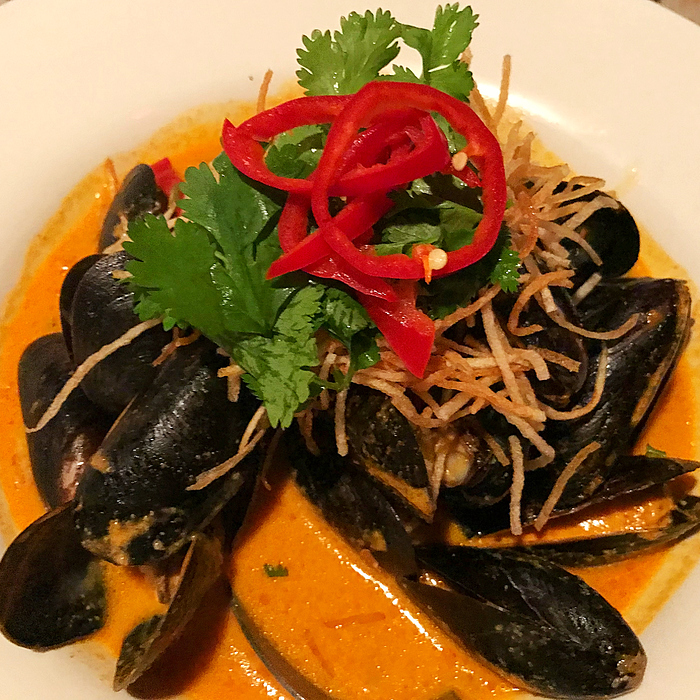 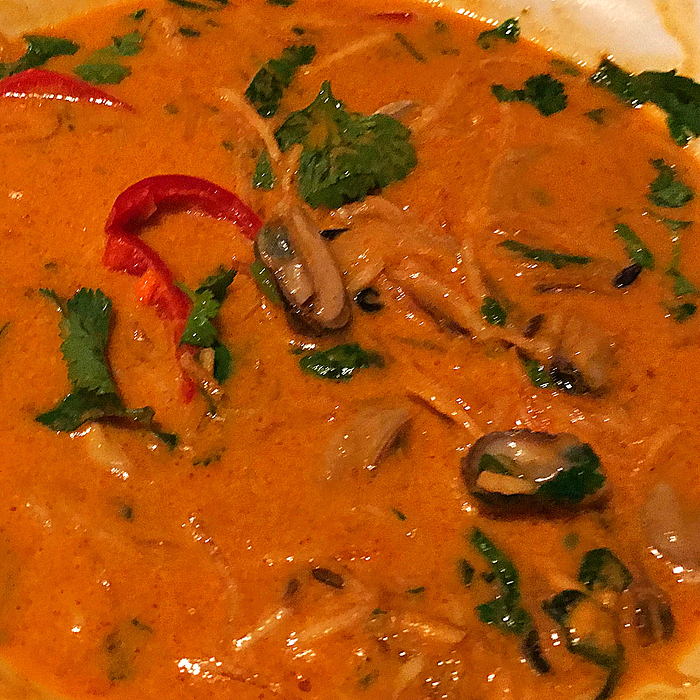 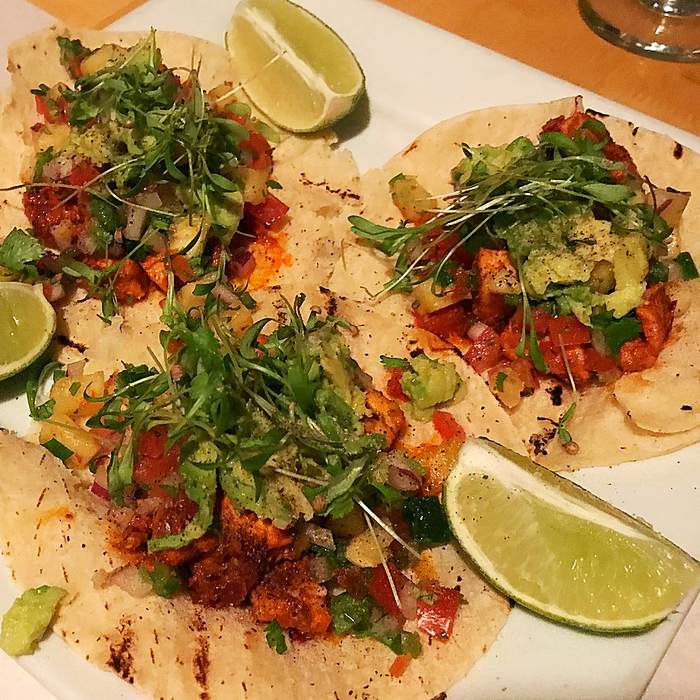 Wow. What an outstanding sounding meal.

We went back to Fin in Summit for the first time in nine months. We had a great dinner outdoors under a tent. I heard that the original Fin in Montclair has permanently closed. Details and pictures in the main WFD thread below.

We had an excellent dinner outdoors under a tent at Fin Raw Bar and Kitchen in the quaint little town of Summit, NJ. They closed off the whole street and filled it with tables for a few restaurants to share. We enjoyed Shanghai shrimp in a curry ginger sauce; 7 spice tuna with soba noodles; an excellent spicy tempura battered tuna sushi roll; fried calamari; and an awesome chocolate retro cake for dessert. It all went great with an excellent California red blend. [image] [image] [image] [im…