I too use grocery store Thai pastes (Maesri brand), and also Patak Vindaloo and curry pastes. They all work for me.

Re: your country, we should also mention Kedgeree and Mulligatawny.

we should also mention Kedgeree and Mulligatawny.

I have it in mind that these were both dishes developed in India for the 19th century colonial Britons and later imported into the UK. Kedgeree was a Victorian era breakfast dish here but is now a dinner dish (features periodically at Casa Harters). I havent seen mulligatawny for years, not that I’ve particularly looked for it. I used to see it amongst the tins of soup in the supermarket. Tried it once but didnt enjoy it.

(Edit: soup is still available at my local supermarket - one from Heinz and one their own brand. The Heinz one says its been in production since 1910. - https://www.sainsburys.co.uk/gol-ui/product/heinz-mulligatawny-soup-400g )

My mom almost always orders the Mulligatawny, when we dine at an Indian restaurant . Every version is different. 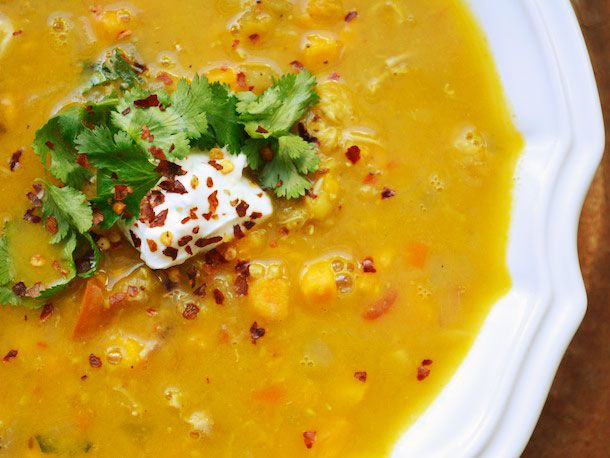 An Indian-influenced lentil soup that hits all the right notes.

My first kedgeree was made my my cousin’s Geordie husband. I also ordered kedgeree at Simpsons -on -the- Strand once. Posh version .

Re: your country, we should also mention Kedgeree and Mulligatawny.

Balti originates in the UK from the curry houses in what’s now known as “Balti Triangle” in Birmingham. Like most curry house food in the UK, it’s an Anglicised style based on North Indian dishes. What’s funny, to my mind, is that you will now see “Indian” restaurants in other parts of the country offering “authentic” Balti curries, with the implication that it is traditional Asian food.

OK, time for the emergence on the thread of the UK’s most significant contribution to the Western enjoyment of “Indian” food. Yes, you got it. Chicken tikka masala. No-one really knows its origins here, although the best claim to have invented it goes to the Shish Mahal Restaurant in Glasgow - https://shishmahal.co.uk/tikka-masala/. Yes, of course, it has a resemblance to butter chicken - murgh makhani. But this is our murgh makhani. Don’t let anyone tell you different.

But enough of this bastardised food. Here’s a link to my favourite Mumbai street food restaurant. A rare thing in the UK - an “Indian” restaurant owned by a Indian (and an Iranian). And one of a slowly growing number of places which are serving more traditional or regional food, rather than the standard offerings. http://www.bombaytomumbai.co.uk/

Speaking of “standard offerings”, let me take you to Manchester’s “Curry Mile”, although changes in ethnicity means it is now more the “Kebab Kilometre”. It’s actually only ever been about half a mile long but it used to pack in around 70 curry houses, pretty much all of them serving identical menus of “any protein with any sauce” dishes. It’s not what it once was but is still a fun place of an evening but not really somewhere to go for the best Asian food. 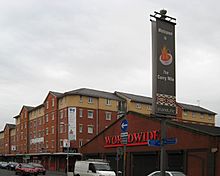 The Curry Mile is a nickname for the part of Wilmslow Road running through the centre of Rusholme in south Manchester, England. The name is earned from the large number of restaurants, takeaways and kebab houses specialising in the cuisines of South Asia and the Middle East, thought to be the largest concentration of South Asian restaurants outside the Indian subcontinent. Within a length of half a mile there are least seventy establishments of this kind. The Curry Mile is notable for its ...

Come with me for a walk down the Curry Mile. Google for “Toro’s Steakhouse Rusholme”, which you’ll see at the northern (city centre) end. And go to Google Maps and Streetview. Use Streetview to go south along the Mile. In due course, you’ll reach the end of the Mile at the Wilmslow Road Medical Centre, on the right.

Extra knives and forks for John’s @Harters walk down the Curry Mile. Lots of places of ethnic and pseudo-ethnic communities. Manchester is my first exposure to a Curry Mile. Bravo.

Dinner tomorrow is a lamb curry in a slow cooker. Quick Google search for “Manchester food” compared to our stock means potatoes with the curry, probably Hasselback for us. Something green or perhaps orange yet to be determined.

Our only kedgeree was for breakfast at Brown’s. Brown’s might be considered posh, but not knowing anything – let alone better – we thought it was just darn delicious.

Do any fans of The Crown series remember the scene where Maggie Thatcher was whipping up kedgeree for WC, and the rest at her house? I thought it was pretty funny/quaint, definitely added an interesting touch.

No, missed that detail in spite of being such fans that we can hardly wait for Imelda Staunton (real life spouse of Downton Abbey’s inimitable Mr. Carson) taking on the ERII role.

More real life admiration: like Chancellor Merkel, Mrs. Thatcher too was a chemist.

@BoneAppetite - I too eagerly await the upcoming season(s)! I’ve yet to watch Downton Abbey, so there’s that to look forward to also. Thankful for excellent entertainment during this pandemic.

You’re in for a treat if you’ve seen Shakespeare in Love and My Week with Marilyn. Jim Carter (Downton’s Mr. Carson) just has that way with his lines.

I remember this discussion of “curry”.

That’s plenty of lamb. If you have decently fresh Indian spices, I think Keema is great and could be portioned for freezing (just don’t use potatoes for freezing). If the spices are not so fresh, I’d go for lamb chili, likewise good, or meatloaf. This seems a worthy keema recipe:

Interesting! I’ll have to check the dates on my cumin and corriander seed, but I know I don’t have fresh Garam Masala. Have several other fresh “curry” blends, including a few from Africa. Maybe I’ll order some and use it with some of the lamb that I freeze. I don’t suppose I should freeze it again… should I? Probably should use what I have first. Speaking of using what I have, I’ve had some sumac, or maybe that mix you MAKE with sumac (edited to add zatar) , for more than six months. Still w…

If you’re familiar with South Asian cooking, then you’ll find it interesting to make comparisions with the recipes of the community from that heritage who lived in East Africa before they were, basically, ethnically cleansed from countries such as Uganda and Kenya. You’ll find differences in the spicing and, of course, some differences in, say, vegetables used. I’ve not cooked it but have eaten in a couple of restaurants owned by folk with that heritage and there are definitely differences wi…

Wow! That took an interesting turn! I sorta thought twice about writing “African curries”, some are not technically curries, but here are the ones I have. African Curry Powder Ethiopian Berbere Bahrat Spice Charmoula Seasoning 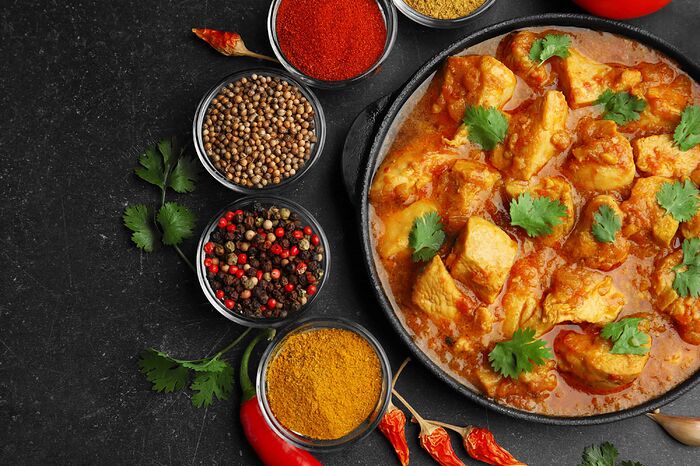 What is Curry? Your Comprehensive Curry Guide - Sukhi's

This curry guide breaks down curry's origins, what curry powder is and how it differs from curry, the most popular types of curry, and more!

I really liked that. How often is that blog about food?

That reminds me of this thread;

What is meant by “cook until the oil separates” in Indian curry recipes? Cooking, Cookbooks, Ingredients

I am making my beloved Hot and Spicy Hyderabadi Tomato Chutney, and intrigued by this step, which is not always men, but seems to make a difference. Here is a discussion on stack exchange . I think there might be a name for this. Bhunao? “…the next important step is that you have to fry (bhunao) the masala well. Keep sautéing them until the moisture gets evaporated and it thickens and you would see trace amounts of oil in separating and oozing on the sides of the masala.” On reddit I read…

Lol my assumption too

Making a lamb curry for dinner tonight and already a crushing disappointment. Special at my grocery on diced lamb stew meat and what showed up with bone-in chunks. Ugh. Boning was fruitless so I tossed it all in a slow cooker and will see if I can pull it off the bone later. Not hopeful. Thai curbside take-away is our backup. Nothing really to do with the curry part - disappointed by the grocery.

Dave - it should work fine. Bone-in is fairly common in traditional South Asian dishes particularly for a handi such as this one: 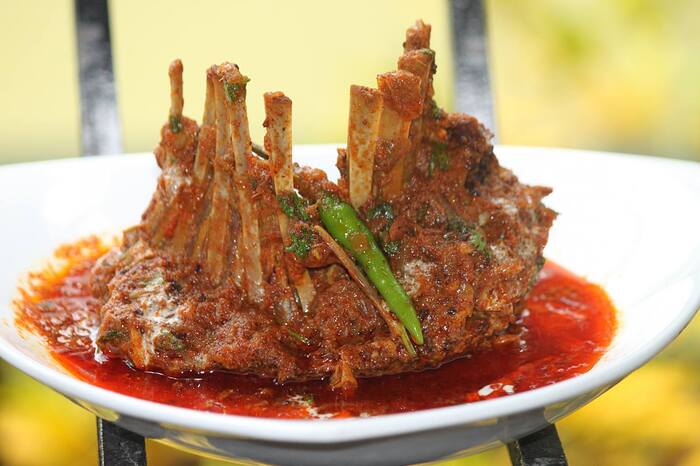 A royal Hyderabadi lamb dish, Laziz Lamb Handi is an extremely rich and delicious prepared with assorted spices, cream, tomatoes, onion, ghee and chillies. Here the fun is to make this recipe in a handi, that definitely adds up the extra flavor...

After several hours the meat all fell off the bones and I fished it all out with tongs. Unfortunately 0.5 kg of meat yielded 0.3 kg of bone and the curry is horribly overspiced. I’m letting that cool and planning to stretch it with potato for lunch tomorrow. Thai curbside take-away it is for dinner tonight.

I double checked the grocery online ordering and it does say diced lamb stew meat. The label on the package says bone-in. We missed that as I ordered, my wife put it away, and then I pulled it to cook. Grocery failure to communicate and failure between my wife and me.

Absolutely amazing amount of bone. The professional butcher who taught me how to break down primals would be shaking his head.

I think the potatoes will save us from throwing away good if overspiced food. I think there is some leftover roast cauliflower in the fridge also. I may toss that in as well.

I think the potatoes will save us from throwing away good if overspiced food. I think there is some leftover roast cauliflower in the fridge also.

Ahha. Aloo gobi gosht. One of my fave Punjabi dishes.