I’ve tried Rao’s arrabbiata, vodka and marinara. All better than most cheaper sauces.

Last week, I browned a pound of ground veal, added the Rao’s Arrabbiata, and we liked the result.

Lidia’s (available at Eataly), and Dave’s (I think that’s the name) , also in the $8-$11 range up here, are equivalent for me.
For cheaper sauces, the Cirio and De Cecco work for me. I usually choose to buy Arrabbiata, Sicilian, Napolitana or Norma .
I’ll head back over to the sauce discussion. 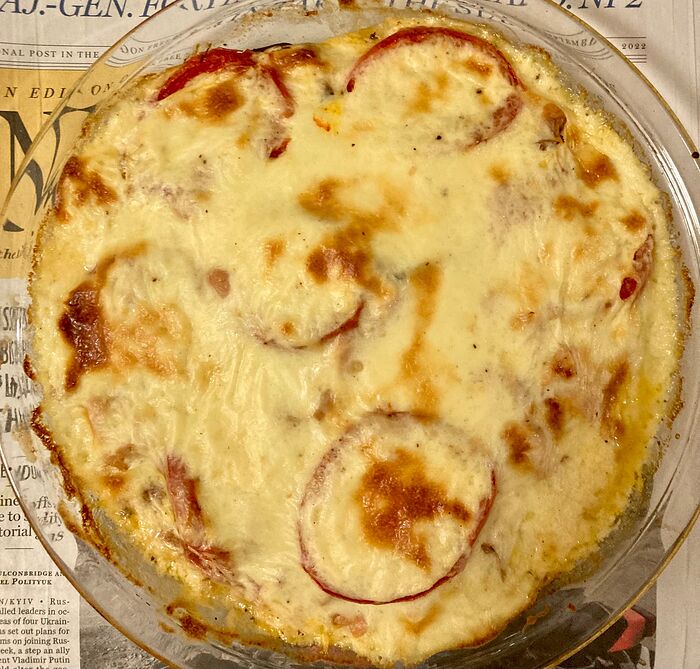 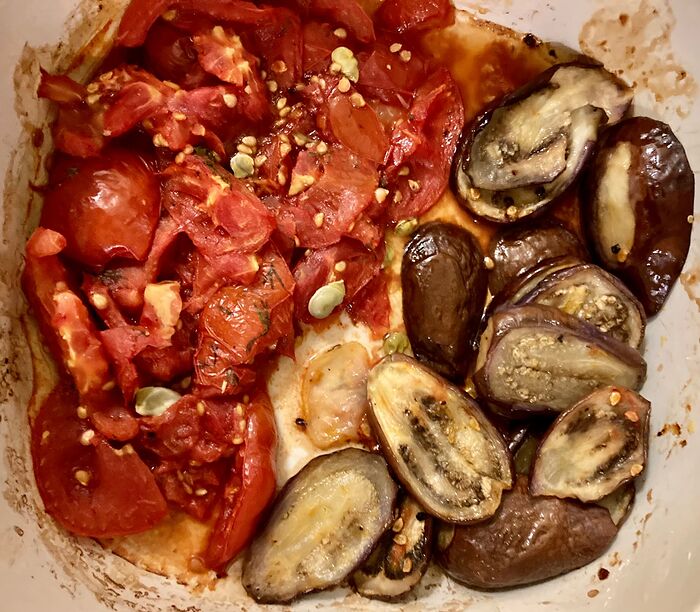 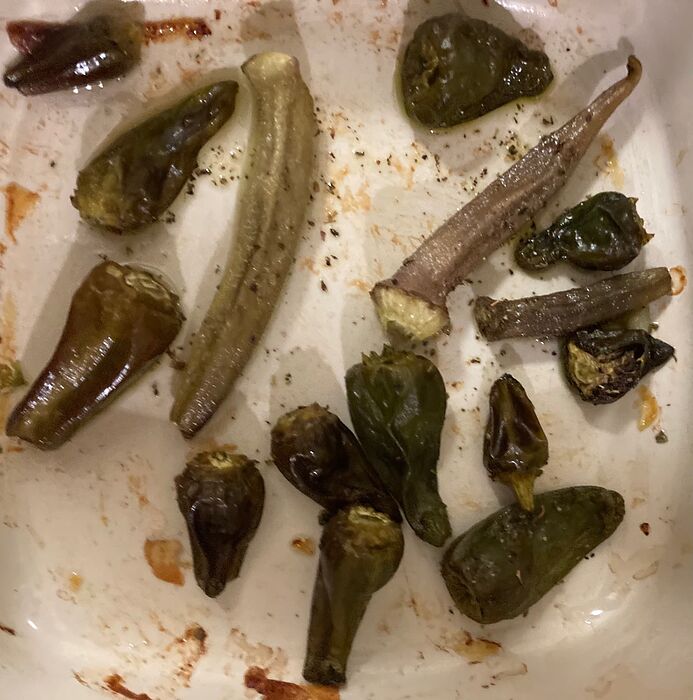 Here’s the recipe for the harissa eggplant. It’s an Alison Roman recipe: 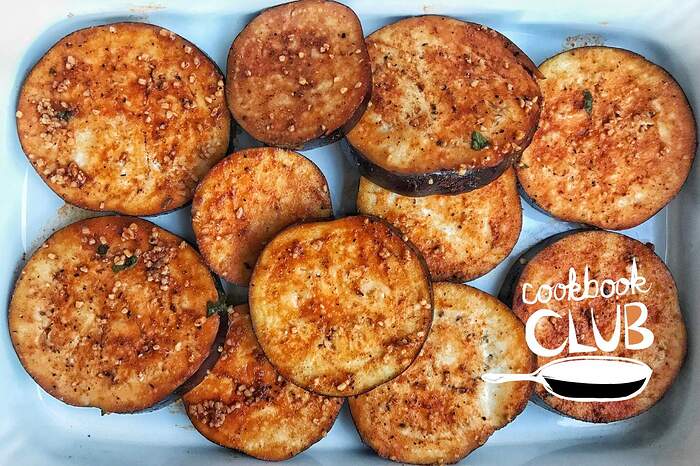 It’s fried, spiced, garlicky, tangy, and so delicious that I dream of it nearly every day. I eat it on toast, with eggs, over hummus, chopped up in salads, as a side dish for literally anything, and, probably most frequently, by itself, right out of...

Thank you! I look forward to trying this.

The recipe calls for a great deal of oil, so when I make this I will try some hacks to reduce the eggplant’s oil-drinking qualities without sacrificing taste.

This one uses a little less oil, maybe you can adapt the spicing. 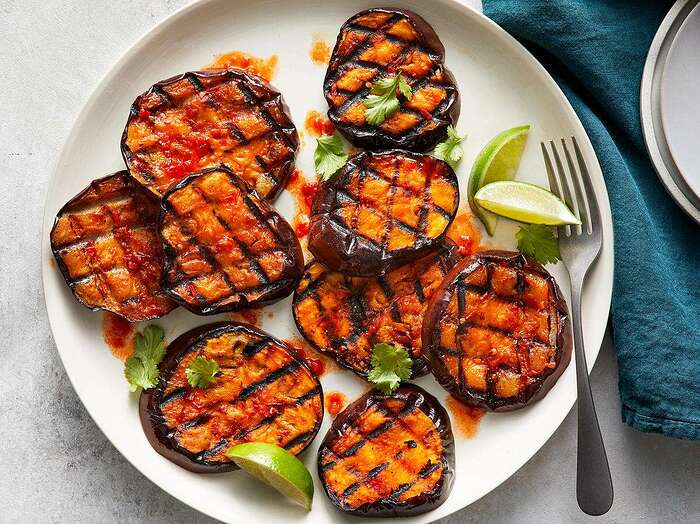 Tender, charred eggplant makes for a satisfying side dish that pairs well with any protein. Harissa is great for basting—a...

WFD folks: In case you’d like to cook along with other Onions, there are a few different cooking themes getting going for the month and the quarter in case you haven’t seen the threads for nomination and voting:

It’s that time again - a change of season and a new Dish of the Quarter to dish about! Please nominate your choice in ALL CAPS below. Nominations will remain open until Friday, Sept 23. Thanks HOs!

The year has flown and the autumn quarter is fast approaching - time for a new Cuisine of the Quarter! Please nominate whatever tickles your fall fancy in ALL CAPS below. I’ll close this thread on Friday, 9/23, so we have a full week for voting before October starts. Thanks HOs!

Welcome to our reporting thread for our September Cookbook of the Month, COOK EAT, REPEAT, by Nigella Lawson. I’ll admit to not being particularly enthusiastic about this one, but I’ve checked it out from the library and been drawn in by the writing. I even bought some organic bananas today to use in that curry that infamously calls for banana peel. In for a penny, in for pound, as they say. If you are the first to report on a recipe, post your report as a reply to this topic. If someone has …

Clearly you HOs have grilling on the brain, because KEBABS were our big winner for this quarter’s DOTQ. Thank you all for your participation - let’s get those skewers out!

Get ready to head to the tropics, because CARIBBEAN was our big winner this quarter! Looking forward to learning more about the region and its diverse cuisine with you HOs. Thanks to all for your participation in COTQ!

I haven’t made the fried eggplant dish above but I’ve had to use some for other dishes and I agree eggplant soaks up a lot of oil when fried. I have an olive oil spritzer in my kitchen so I can slice the eggplant then spritz both sides of each slice then cook under the broiler. It cuts down on a lot of oil being used. It works well with sliced zucchini too

Maybe you can broil the eggplant while making the sauce?

A day off to deal with a medical procedure. Driving in pouring rain down to south of Boston (I’m full-on north) is never fun. But got it done. AND I stopped in the next town over to pick up more bottles of my favorite Ballymaloe steak sauce on my way home since I had run out a couple of weeks ago.

When I realized last night that today/tonight was the start of Autumn, and it was going to be cool enough, I pulled out a boneless chuck roast last night to defrost for Mom’s Lemon Pot Roast. And I was actually able to start it at 3:30 to be able to eat dinner at a reasonable hour. Bonus!

Boiled Yukon Gold potatoes and one of the mega-carrots I picked up this past weekend for the veg side, along with my favorite red blend Silk and Spice. Back to work tomorrow. 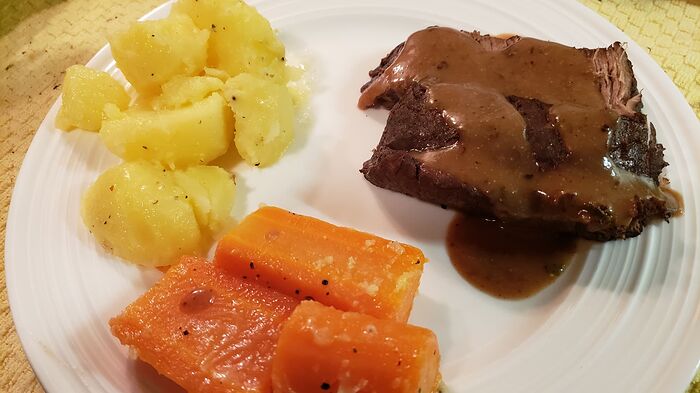 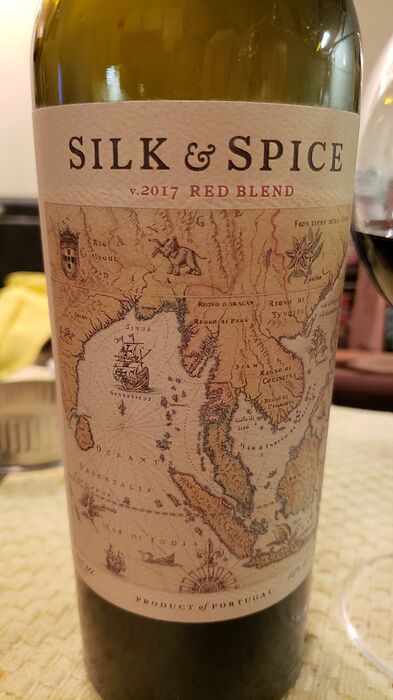 That looks super-comforting, and I hope you’re doing ok!

The last of the zukes, which aged well since Sunday. I’m pretty bummed they’re gone now, as temps are realllly cooling off, and I don’t enjoy grilling when it’s cold out.

Aldi’s Calabrian pepper/smoked mozz ravs were good, texture of the pasta itself very tender – but I can’t say much about the filling, bc my sauce might’ve been one of the best I’ve ever made

I sweat a small diced shallot & 2 chopped cloves of garlic in olive oil, added a lil bit of tomato paste, let that cook a bit, added a splash of red wine, reduced, added the fresh grated FM tomatoes, s&p, and 2 healthy spoons of TJ’s Calabrian peppers. Reduced some more, added a little pasta water & a coupla spoons of crème fraiche to finish it off, plus chopped basil.

I’d only ever used the peppers as a spicy topping for pizza, but they’ll be a standard addition for arrabbiata or when I just want to add a little heat to my sauce, but not RPF. Super-satisfying & easy dinner. 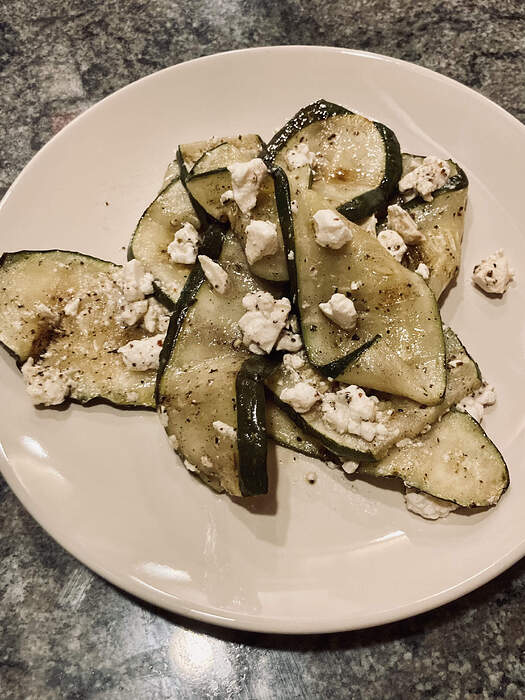 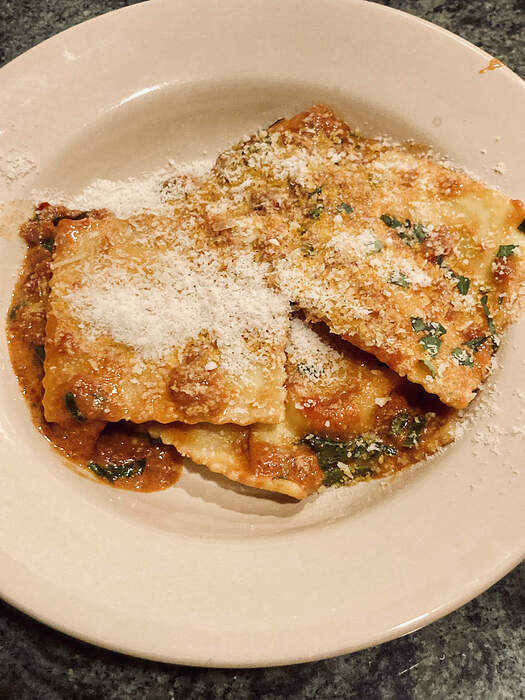 I made a variation of this, using chuck roast and peach jam, cranberry sauce, omitting the tomato sauce and the beef broth. I didn’t do the rub part, just seared the roast, then braised it in the sauce in the oven at 300 for almost 3 h. 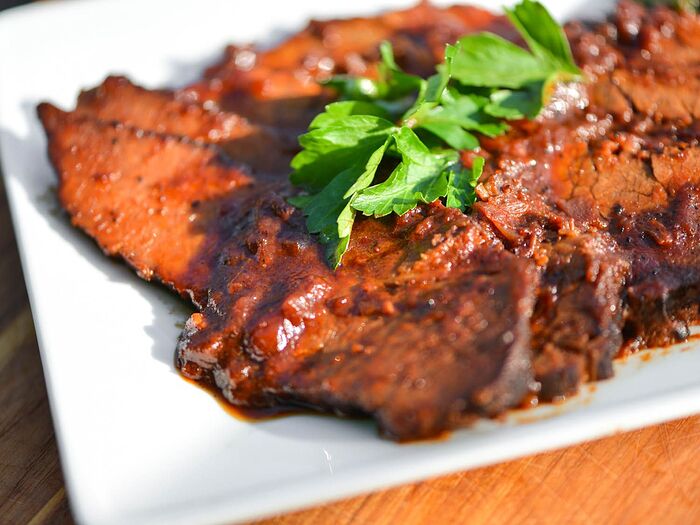 A beef roast worthy of a holiday centerpiece, this flavorful and moist brisket point is simmer in a barbecue-inspired sauce that's given a seasonally fruity touch by way of apricots and cranberries.

Last night I made a MarleySpoon kit, shrimp curry mee goreng with bok choy. I changed up some of the technique (velveted the shrimp, added ginger, garlic, white pepper, and shallot, and resequenced). It was very tasty! Smacked cucumber salad alongside. 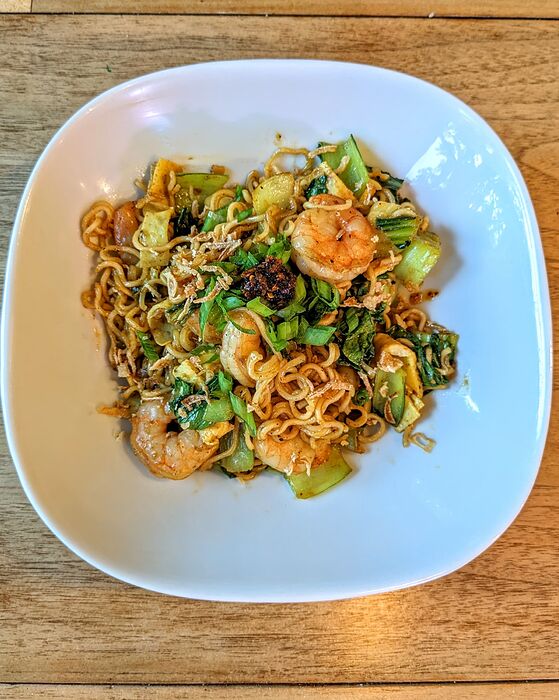 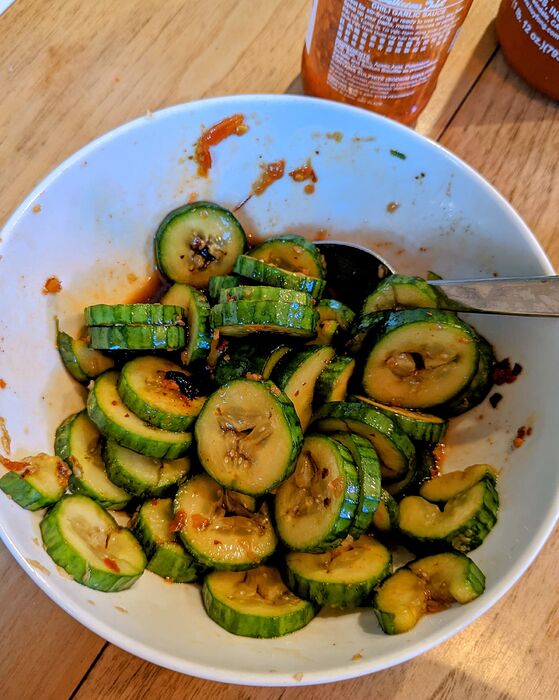 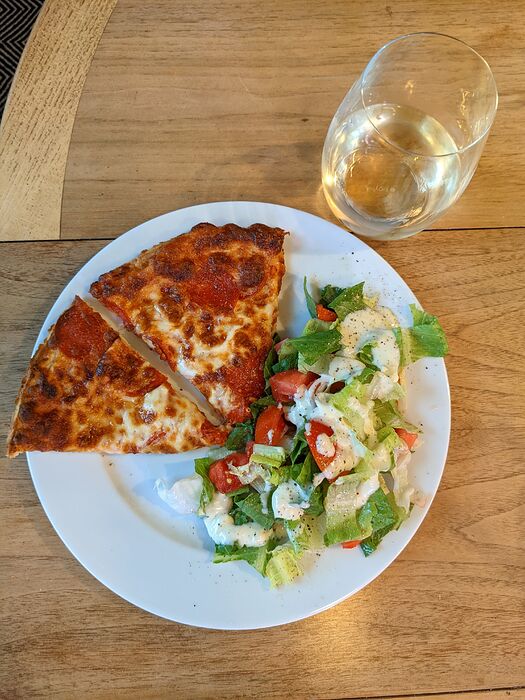 Leftover scallion chicken with mushrooms and peas in cream sauce. 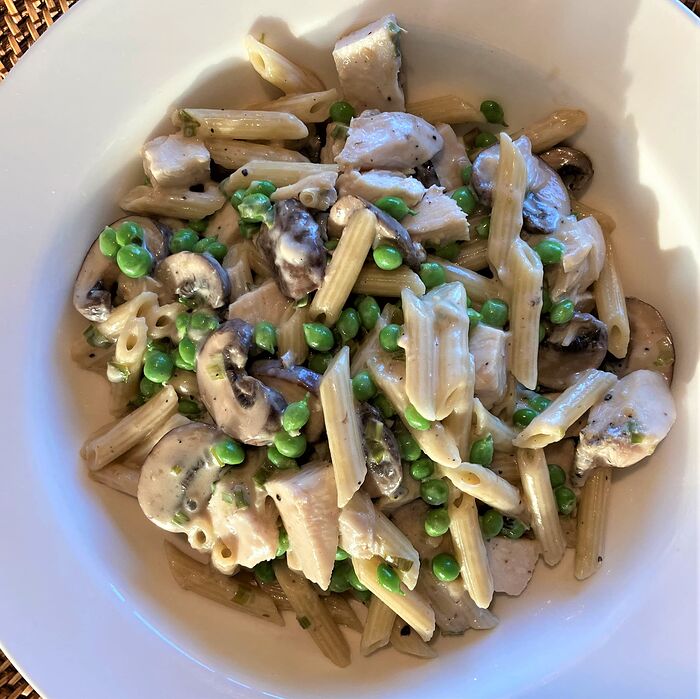 Today was a rough day financially for me. Costco AND Trader Joe’s. Shouldn’t be allowed within 24 hours.

Dinner: Eggplant Parm Stacks. There was no pasta on the side, but there was bread. This is what happens when you’re tired of chicken and beef and not feeling seafood. Eggplant was on the seedy side. Started scraping but finally gave in. Ended up not being bitter at all. 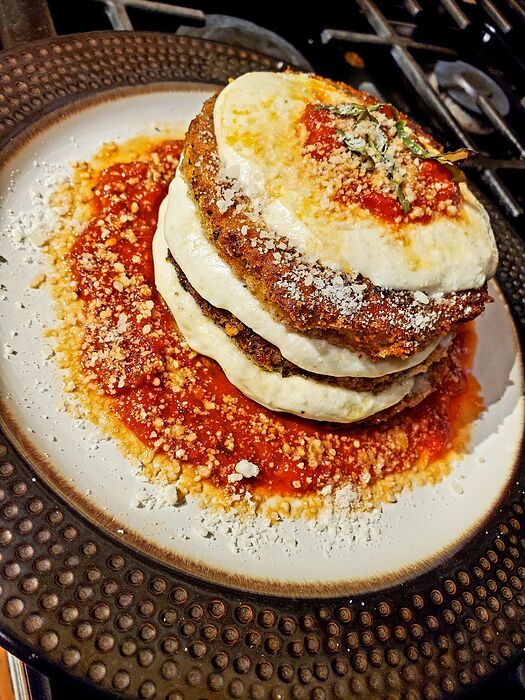 Drinks: vodka martini for me, pumpkin martini on rocks for BF. Beautifully brisk evening outside with torches and candles…and a jacket! 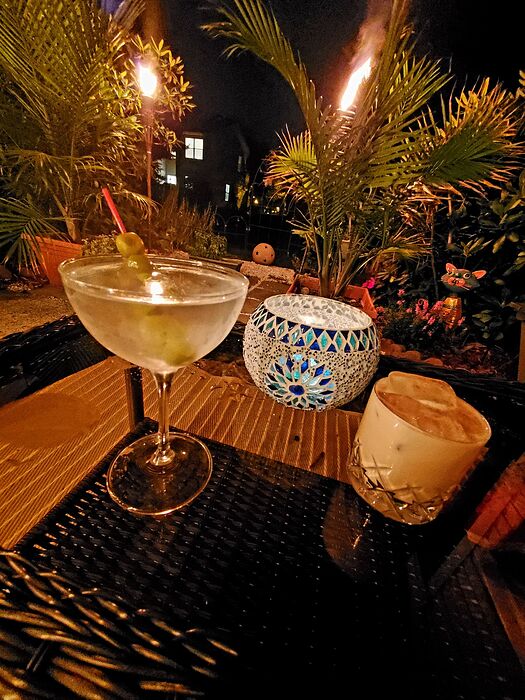 Found this packet of dry rice noodles at 99 Ranch Market. They came with the spice/veg packets shown - the veg consisting mostly of radish, pickled mustard greens, Pixian watercress, and most of all, chilies - pretty spicy! BF wokked up thinly sliced pork with various soy/sesame, etc., to go with, as well as little salads of cukes, tomatoes, and tofu. all delish. I really liked the noodz, BF liked them a bit less. Wikipedia tells me that Nanchang is the capital of the Jiangxi province, and their cuisine is known for being hot. I bought a pack for my sister but they’ll be too hot for her, so we get to have them again sometime. 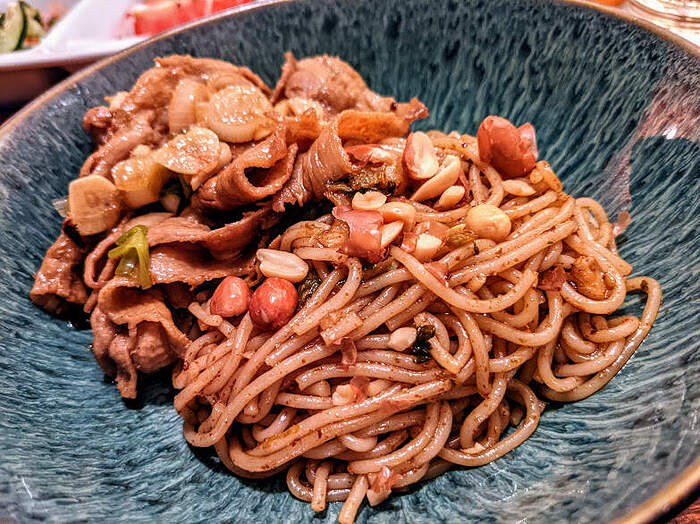 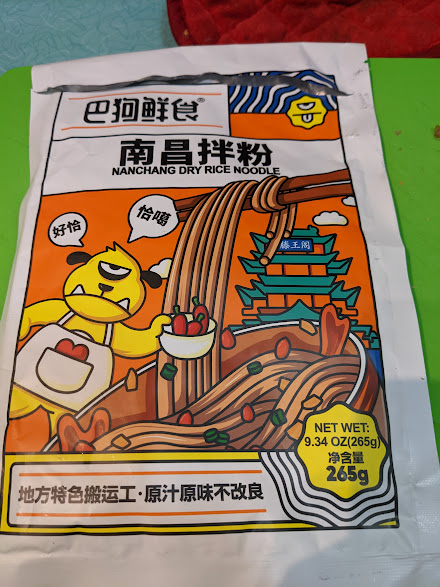 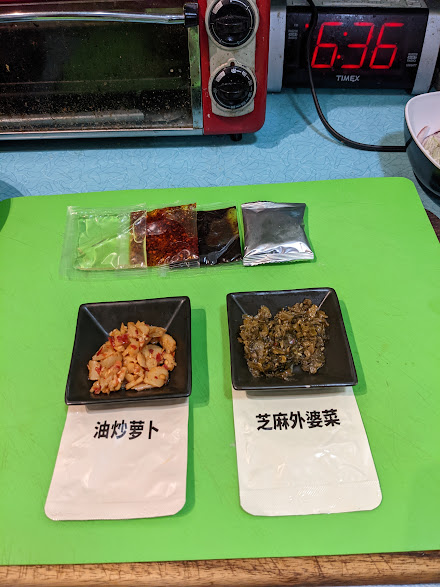 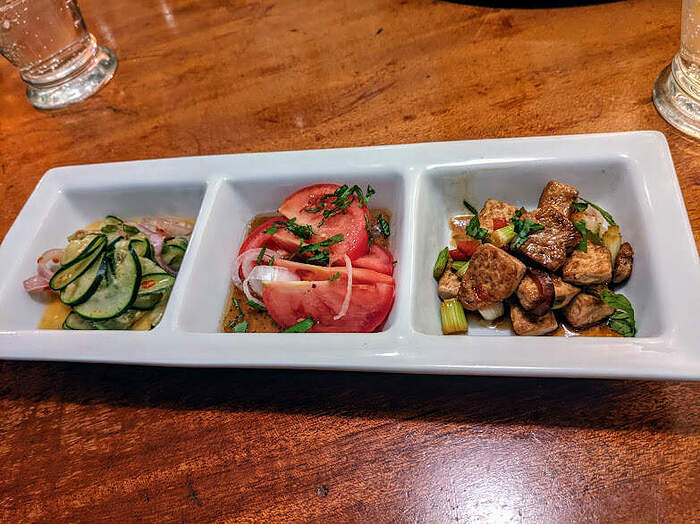 WHAT is a pumpkin martini?

WHAT is a pumpkin martini?

Okay, so it can be made in a variety of ways:

Start with 3 or 4 ounces of pumpkin pie or pumpkin spice liqueur (in NJ we have brands such as Pennsylvania Dutch and Fulton’s Harvest). I then add a splash of 100 proof vodka (what they don’t know won’t hurt them

) and a splash of Scotch. Dusted with pumpkin spice.

You can also swap the vodka/Scotch with white or dark rum and/or bourbon. And we were just discussing this today that the first time I made this drink years ago, I could swear I used Licor 43. And it was amazing. Haven’t had it on hand in too long.

If served up in a martini glass (how I normally would), it can be rimmed with cinnamon sugar or crushed Graham Crackers. Endless possibilities.

I don’t do sweet creamy drinks personally but I’ll make gallons of this for my BF, mom, if we have people over, etc, in fall. Usually I take one sip to make sure its okay, but that’s it.

We went to Dalí tonight with some relatives. We had Jamón Ibérico de Bellota, Patatas Bravas, Gambas al Ajillo, Mejillones en Vino Blanco, Pulpo A’Feira, Albóndigas de Cordero, Chuletillas, and a Paella Valenciana. We liked everything, but the standouts were the Ibérico ham and the lamb meatballs. No cocktails. We had to go easy on the alcohol, because both couples were driving.

The only unfortunate feature of the place was the noise level, which made it difficult to talk. Can’t have everything!

Farfalle with shredded carrots in a creamy sauce - first sautéed the shredded carrots then added several
cups of water and cooked the farfalle directly with the carrots. Once al dente just added some cream, butter, capers, parsley, parmesan, sautéed pancetta and nutmeg 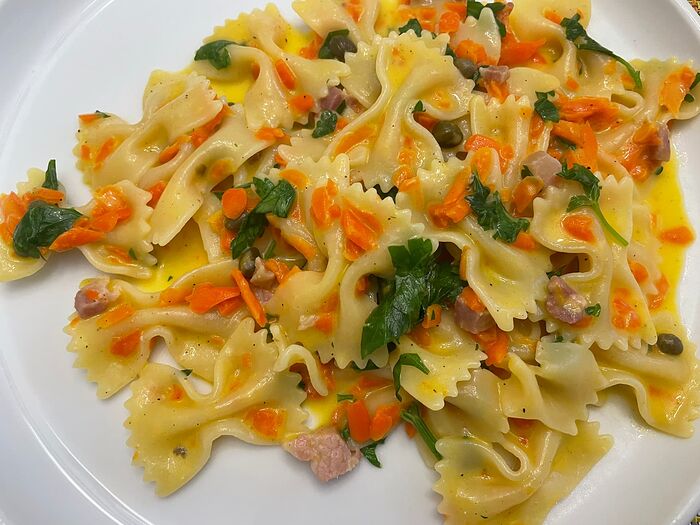 Hi WFD gang - voting for Cuisine and Dish of the Quarter is live. Come join us!

Hi HOs! Big thanks to all who participated in the nominations thread this quarter. We had a long list of nominees, but only a few got more than one mention. The three finalists are below - cast your votes by clicking the knife-and-fork icon on your choice below. One vote per HO, please. Voting will end on September 30 at 5pm. Thanks and happy voting!

Clearly you HOs have hearty cooking on your minds this fall - lots of great, rib-sticking nominations for DOTQ this quarter! So many, in fact, that I had to narrow it down to the three that received the most mentions. Cast your vote by clicking the knife-and-fork icon on the appropriate post below - one vote per HO, please. Thanks and happy voting!