Ohhhh, who am I kidding? They go together like bacon & bacon!

July - a hot month. Ice cream, enjoyed while relaxing on the deck, at the pool, or while sitting on the curb after getting it from the passing ice cream truck, is a good way to cool down. And flavors? Too many to count, but it’s time to enjoy as many as you can!

So - pull out the grill (or grill pan if you can’t grill outside!), enjoy the anticipation of an ice cream cone after a fun summer day and evening, and tell us what’s cooking where you are.

Last night’s dinner, so technically still June, but whatever. 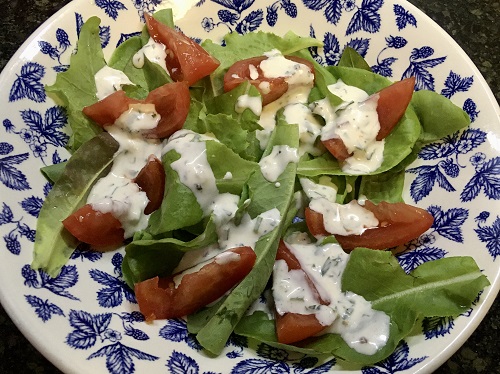 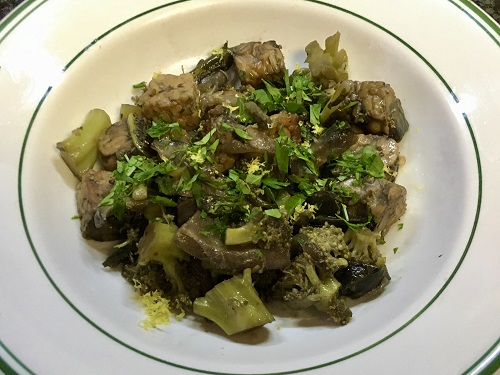 For about a half cup:, combine

add 2 T sour cream and 3 T mayonnaise. thin with buttermilk until it looks right to you.

Got really lucky at the local market today, where I was hoping to find the first chanterelles of the season. And wouldn’t ya know it? There they were. Beauties, and a whole (metric) pound of them, too. 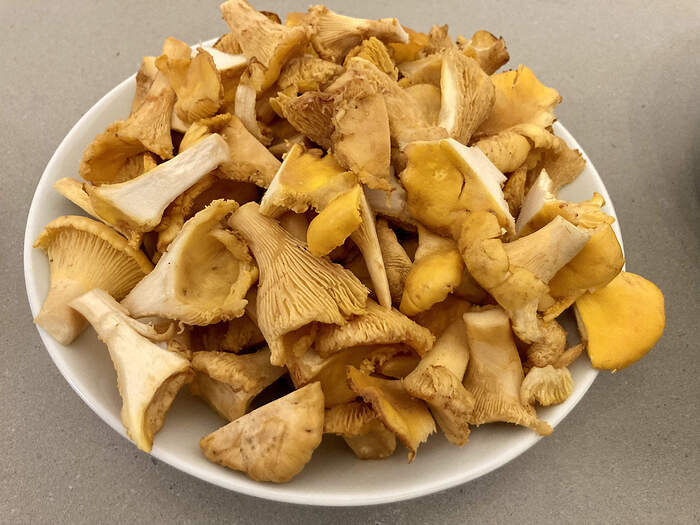 Picked up Molisana pappardelle at the Italian market even though I still have 3 half packages of other pasta shapes, but these were simply perfect for the dish.

I melted some butter in a big pot while the pasta water was heating up. Fried up a bunch of diced bacon, almost burning a few dice, but not quite. Took out the crispy bacon, poured off the extra grease, then added 1.5 finely diced shallots & probably 2/3 of the chanterelles (yay for leftover shrooms!).

When they started to release their liquor, I scraped the tasty bits from the bottom of the pan & added a splash of Riesling, some chili flakes, s&p, and a big fat spoon of crème fraiche & chopped fresh parsley. Added the perfectly al dente pappardelle to the pot, added the crispy bacon, mixed it all up & served.

Might just have been the best I’ve ever made. Taking out the bacon and adding at the end so it stays crispy was brill. A tiny bowl leftover for later tonight… we know how it goes 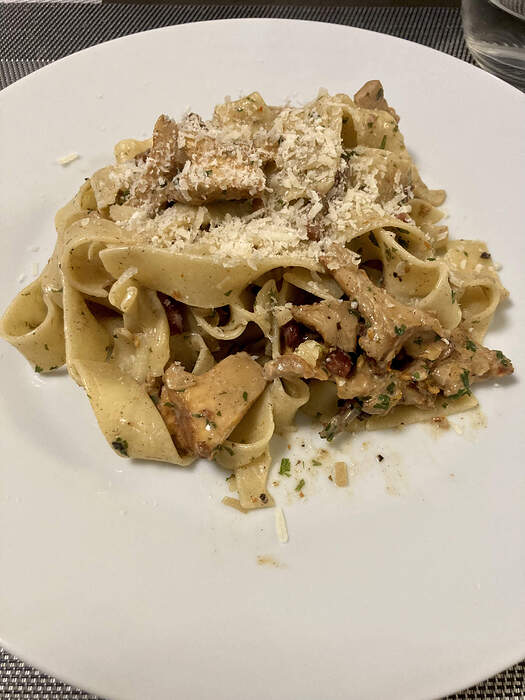 Burrata caprese was the antipasto. 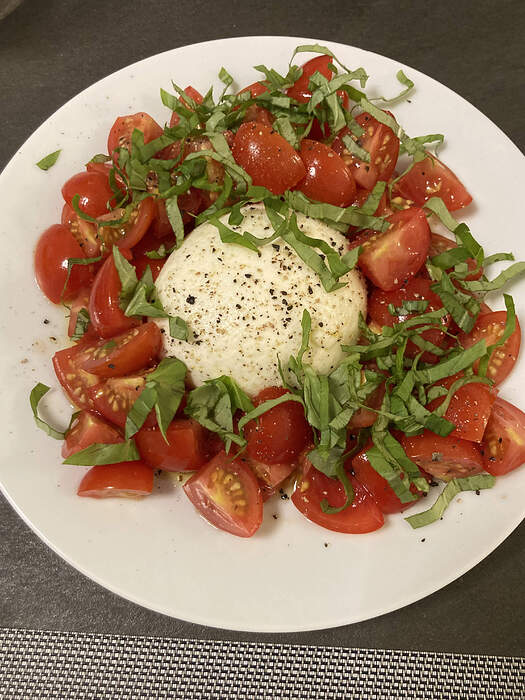 Sounds delicious! Can’t go wrong with chanterelles and pasta! I have some more burrata and tomatoes for later on today as well. Tis the season!

For a variety of boring reasons it’s been over two months since I did much cooking beyond a fried egg on toast. But I went to a farm store today and was inspired by the absolutely gorgeous produce there. Freshly-dug baby new potatoes, sugar snap peas and the tiniest shell peas I’ve seen in a very long time. Super delicious with TPSTOB. 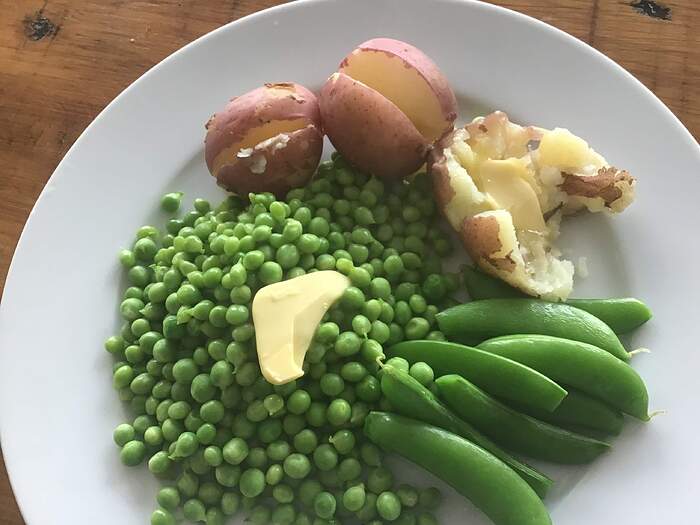 Tonight I made nutty umami noodles with scallion brown butter, haricots, and spiralized zucchini. I also made some baked teriyaki tofu cubes and omelette strips that were stirred through. An off-dry Gewüztraminer to go with. 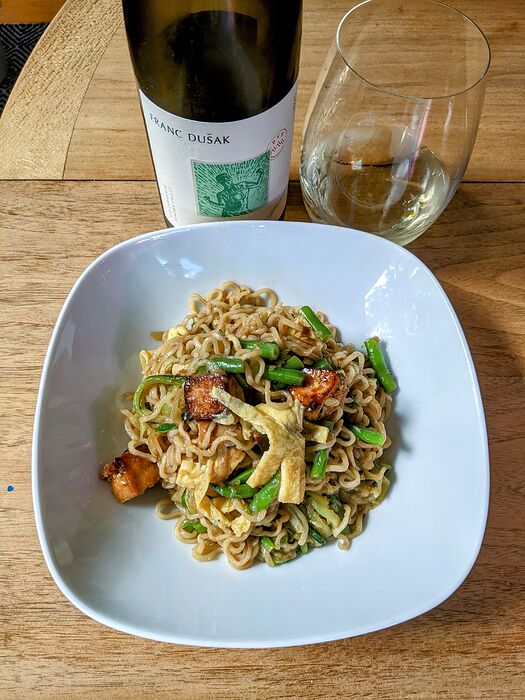 This was yummy but I still prefer this recipe with my tweaks: 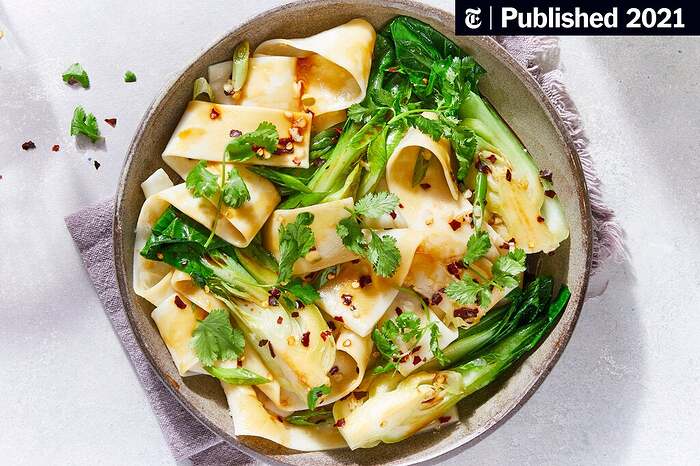 A staple dish from the Shaanxi Province in China’s central northwest, yo po mian literally means “oil sprinkled noodles.” It’s traditionally made with biang biang, or hand-torn flat noodles, but wide wheat noodles are used here for a quick weeknight...

I still prefer this recipe with my tweaks:

Looks and sounds amazing. What are your tweaks?

No local strawberries at my local farmstand, despite there being plenty in the fields for U-Pick-Em a couple of towns over from the same farm that feeds the farmstand.

I guess the truck never got to the farmstand. Maybe I’ll try again tomorrow.

For dinner, I went salad, because I’ve got WAY too many veggies in the fridge. 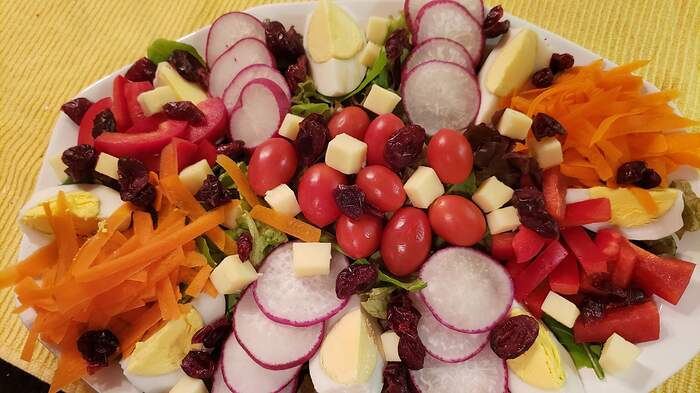 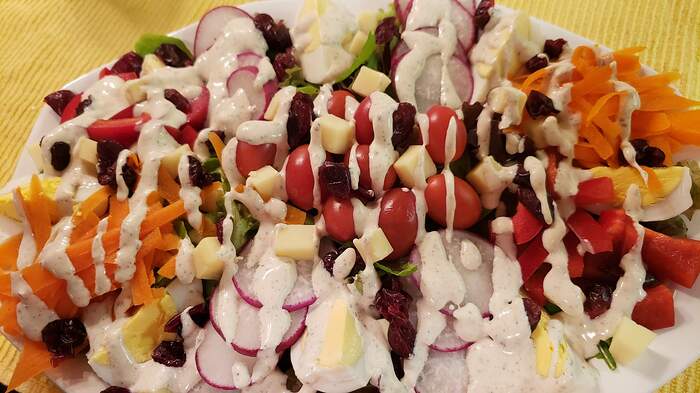 Wine. And the salted caramel cupcake from yesterday’s farmer’s market for dessert.

And it looks like I’ll be making pesto tomorrow. 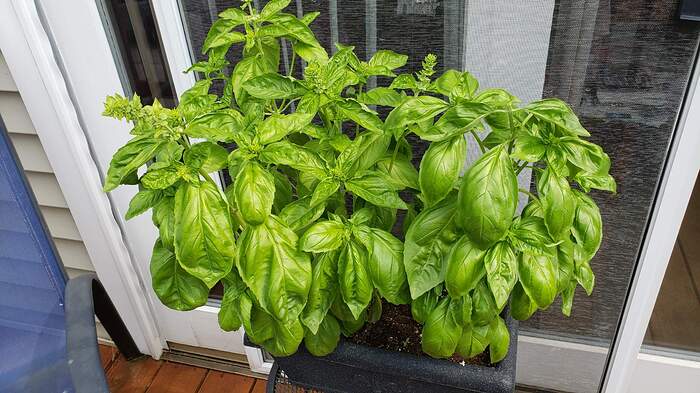 Pickerel for dinner , with potato salad 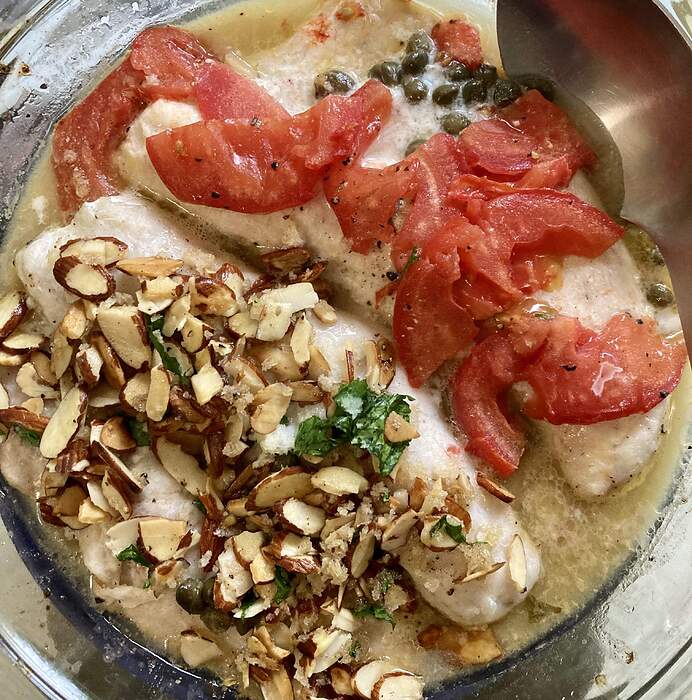 Got to cook for the first time in awhile, had a few frozen pizza crusts from the new Italian deli in the area, Patosa’s Ravioli of Brooklyn. 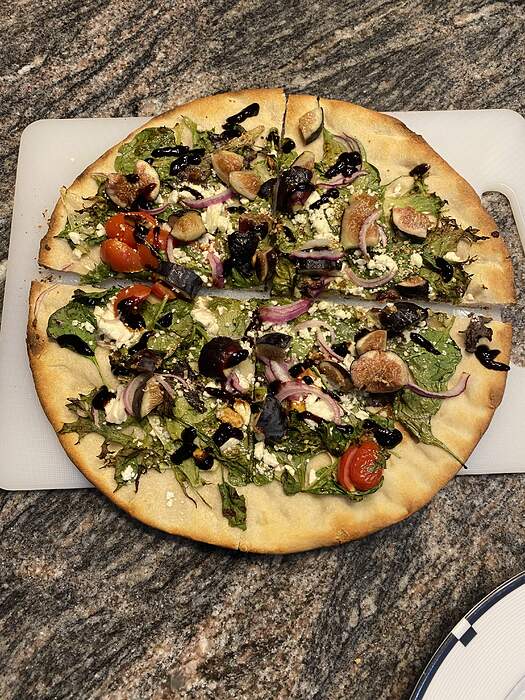 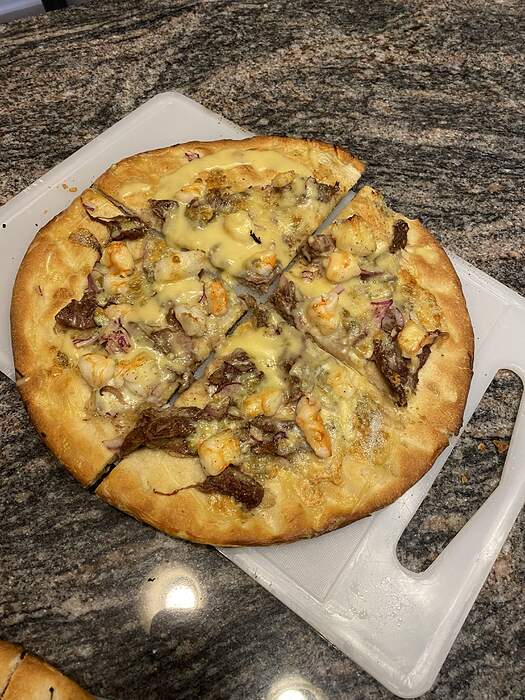 So f’n good! I created this pie as a signature app at a restaurant of mine a dozen years ago. Really love the combination, I use to actually make it with crab meat vs shrimp.

Crust was good, certainly got crisp. Might try to tweak my preparation next time but it was good.

Obligatory corn on the cob for 4th of July.

Happy 4th to Everyone!!!

Looks delicious! Sometimes the best meals are the simplest.

How was the salted caramel cupcake? Better than the key lime one I hope?

Too bad about the strawberries. They are plentiful where I live in Ottawa Canada. I got a big basket in my CSA yesterday. If we lived any closer to each other I would share…

( if you notice your post was modified I fat thumbed the knife and fork button for my moderation edit button. I didn’t make any changes and restored the post. My bad! )

Like @ChristinaM i also made (the unfortunately named) Umami Noodles - I started with Andrea Nguyen’s recipe and made a few adjustments.

Used some of the produce I bought in Chinatown last week (got in a little grocery shopping before the HO group dinner) - fresh shiitake mushrooms, bok choy, garlic scapes, scallions, and cilantro.

The fish was lovely as that prep always is. The noodles were fantastic. Taking all my willpower not to eat through the rest. 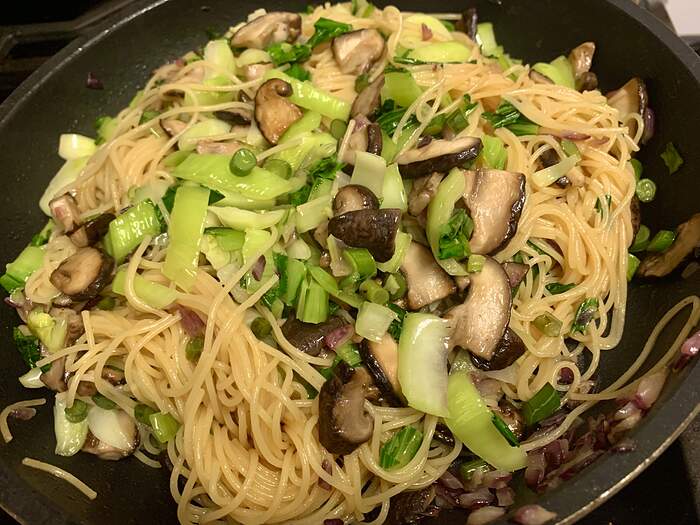 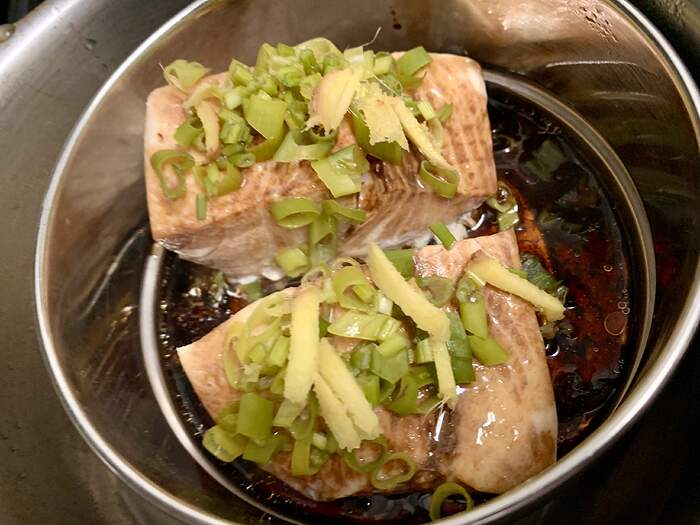 That all looks so good @Saregama! I’d be picking away at the leftovers too…