What would you do with "Lamb shoulder blade roast!" 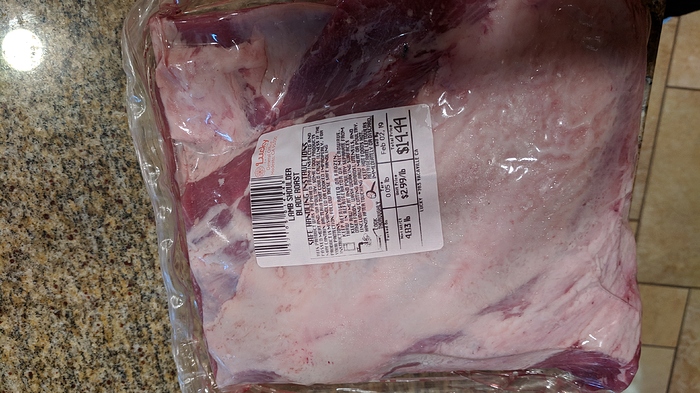 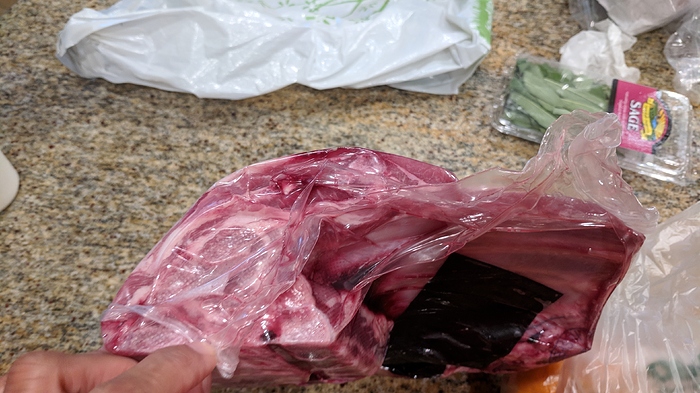 Not sure what this is, but I love lamb and it was on sale. I was at the store and to get fresh sage to for the BOGO pork loin.

Firstly, what it is: There are two commonly roasted “joints” of lamb: leg & shoulder. You’ve got a whole shoulder. These are sometimes cut in two to produce two smaller joints, blade half and knuckle half. Shoulder is fattier than leg, and awkward to carve, but it’s generally cheaper, and the meat is sweeter IMO.

I suggest just roasting it plain. Place it cut side down in a roasting tin on a bed of roughly chopped root veg. Carrots, celery, onions, leeks, potatoes, a couple of garlic cloves etc. Whatever you’ve got really. Maybe have some rosemary, thyme, bay in there too. Sprinkle with a little salt. The conventional timing would be 20 minutes, plus 20 minute per pound at about 375, so 2 hours for your 5 pounder, but I’d be tempted to go rather longer. 2 1/2 or maybe even 3 hours. There’s little merit in just-cooked shoulder; the longer time will render more fat and soften the connective tissues a bit more.

Allow to rest (in turned off oven with door cracked open, or out of oven, covered) for 15 to 30 minutes before carving.

Straining and removing most of the fat from the roasting dish juices will give you the basis of a good gravy.

Serve with roast potatoes, some of the mushed-up under veg and something green. Steamed shredded Savoy cabbage would be good.

Incidentally, that 5 pound shoulder is quite a large one (should feed 6), but what a great price! Here in the UK that would be double.

It’s 7.15 a.m. here, and my mouth is watering! Please post pictures of whatever you do with it.

I’m with Robin on the roasting idea, as a first preference. The extra fat makes it more succulent than leg. A low/slow roast would be my way to go. I snapped up a supermarket bargain the other day - a 2kg shoulder reduced from £18 to £12. There’s much too much for a single meal for the two of us. Our most recent thing to do with leftovers is to cut it into smallish pieces, having trimmed most of the fat and freeze it. It then gets reused either as sharwama or for the likes of shepherds pie.

As an alternative, you could get the meat off the bone (not a particularly easy task) and cut it into chunks for cooking in any casserole/stew type dishes, such as curries, tagines, etc.

I concur with Robin & John on a slow roast. Although I do a leg or shoulder about once or twice a year, I sometimes set it on bed of wild rice, but first marinating the roast overnight in some white wine, sliced garlic, Rosemary, some salt and pepper.
When it comes out of the marinade, I spread about 2 cups of the rice on the bottom of a roasting pan, add the marinade liquid , and about 2 cups of water and perch the roast atop. Cover loosely with foil for the first 2 hours. I do half hour per pound at 325 degrees, (until an internal temperature of 140 degrees), during which I add water as it is absorbed into the rice. I keep checking the amount of liquid in the pan until the rice is cooked. Un-cover and turn up the heat to 425 for the last half hour to get nice color on the meat and a nice crust on the rice.
When finished give it a 30 minute rest period re-covered loosely, wherein the internal temperature of the meat should creep to 150 degrees. As the fat and collagen melts during the cooking the rice picks up all of that flavor.

Or, you can always stab it all over and insert garlic slices and tiny springs of rosemary into the holes. Flavours get right into the meat.

And, of course, the stabbing is very therapeutic in dealing with thoughts of the evil boss, neighbour, etc.

Not that I’m inciting violence against anyone. Just saying.

If not with the whole roast, perhaps with leftovers 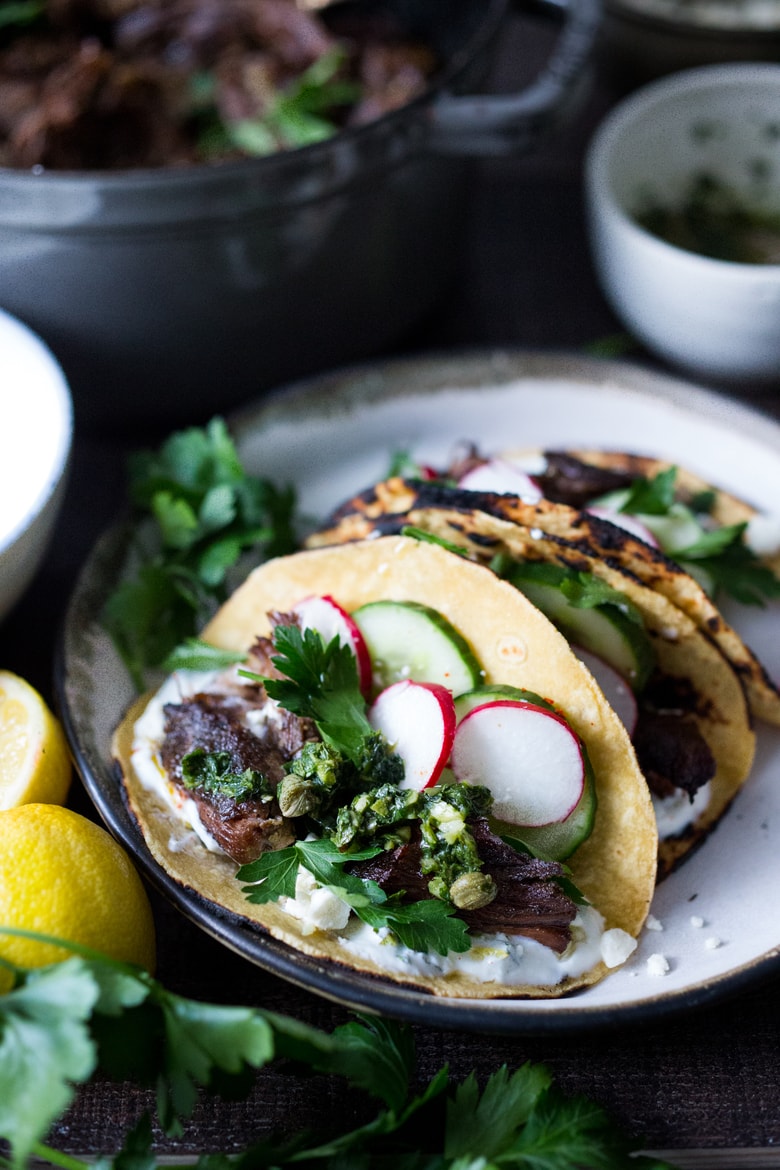 Celebrate Cinco de Mayo with these delicious Greek Lamb Tacos with Minted Yogurt Sauce- a feast for the senses. In this recipe, lamb shoulder is rubbed with a fragrant herb paste and braised in the oven until tender and falling apart. When it's done,...

This is a popular cut for indian preparations. You can cut it into pieces for a curry, or make a one (or two, to fit the available pans) piece roast preparation.

Ovens were a rarity in homes, so for roast, step 1 is pressure cooking the large pieces with aromatics and whole spices (which also yields an amazing broth). Then the meat is dried/browned/finished on the stovetop with the desired flavor profile

There are the many preparations - search “Raan” - both the front and hind legs are called raan when whole; the front / shoulder is preferred.

Thank you all! I’m theoretically working,but taking a peek every once in a while.

Youvetsi. Traditionally made with lamb shank but that roast should work just as well.

Parking recipe, but chickpeas and pasta are going to mess with the old glycemic index.

thoughts of the evil boss

Unfortunately, (or fortunately) I AM the evil boss!

I appreciate all of the ideas, and am seriously considering the Zahav, but I believe it’s described as a three day process, that includes smoking, braising AND roasting. I DO like complicated procrastination!

I also like the idea of “roasting it plain”, but am seriously considering the first recipe I linked, but rubbed with “store bought” harrissa, THEN I can “roast it plain”.

THEN I can chunk it up for tacos, flat breads, or lettuce wraps, or that Korean dish.(bossam?)

I’d prefer something with a personal thumbs up from you guys, but that recipe boasts more than 2000 ratings! Can that be real? 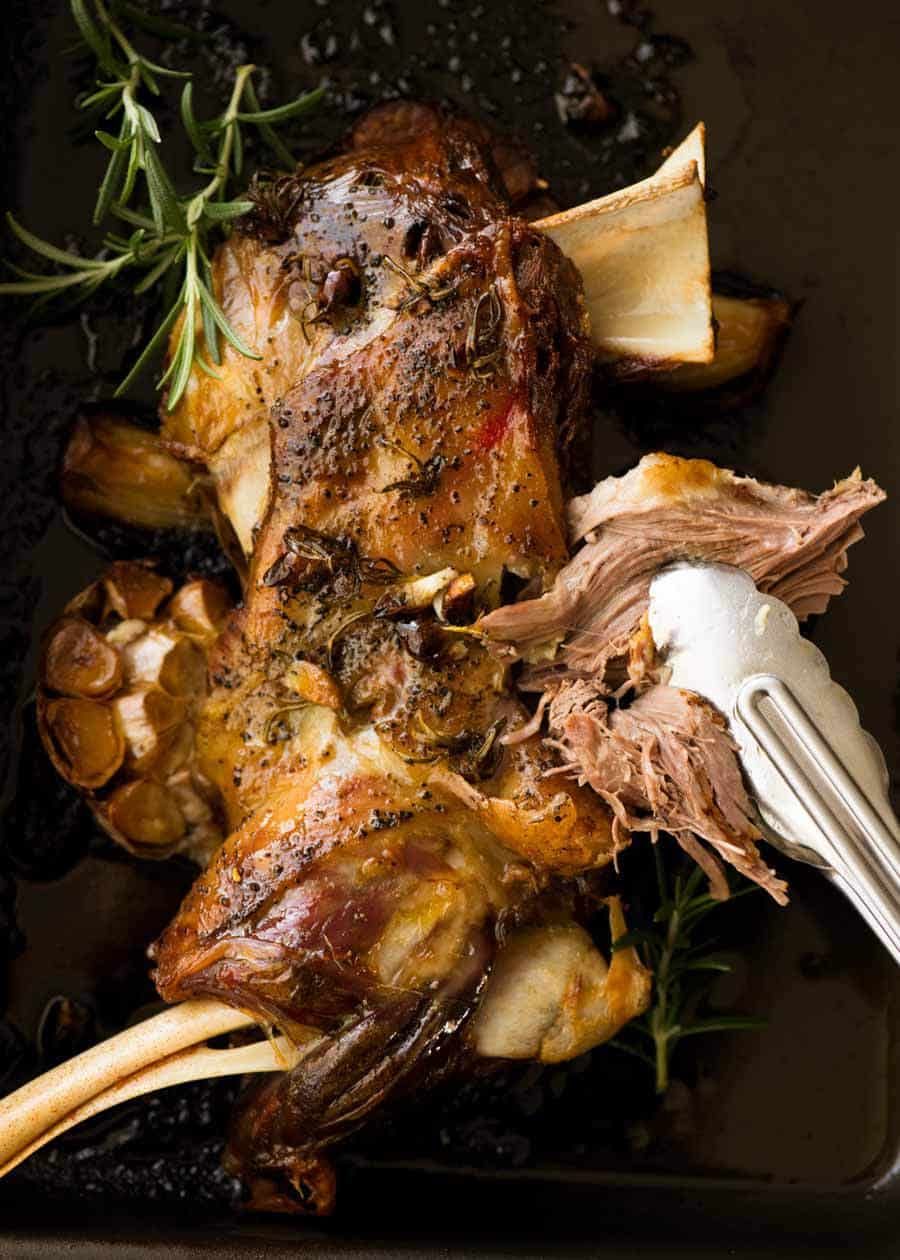 This slow cooked lamb shoulder infused with rosemary and garlic is so tender you don't need a carving knife. Super easy, tastier & cheaper than lamb leg! 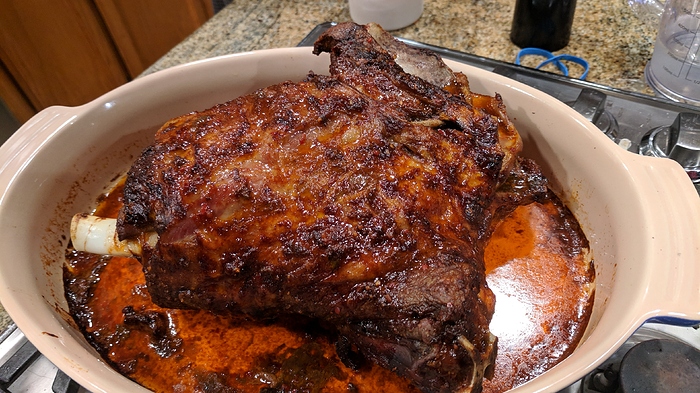 Wow! That picture almost looks like it was lifted from a cookbook. Fantastic.

Awww; thanks so much for your help. Don’t believe I’ve seen a lamb shoulder before. Not pulling apart as planned. 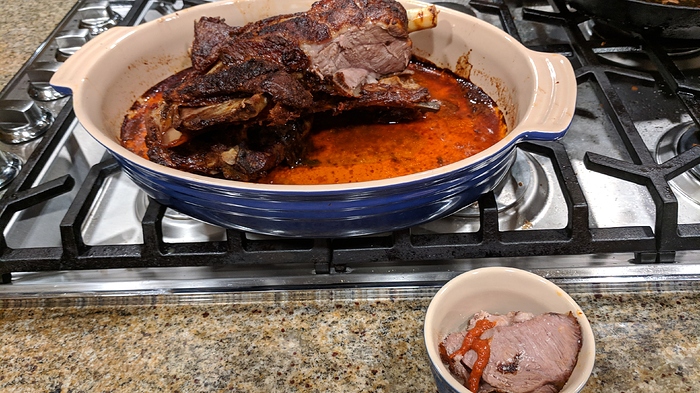 Yes more time and perhaps part of the time covering.
What temperature did you cook it at? How long?