Spring is arriving early this year. My pinocchio orchid is so pleased and is blooming now, when this flower will wither, another bud will appear with another flower, anther bud…the blooming cycle will go on for a while. 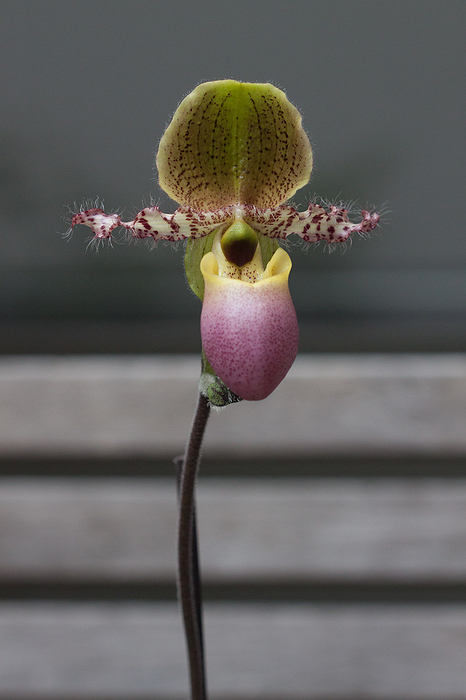 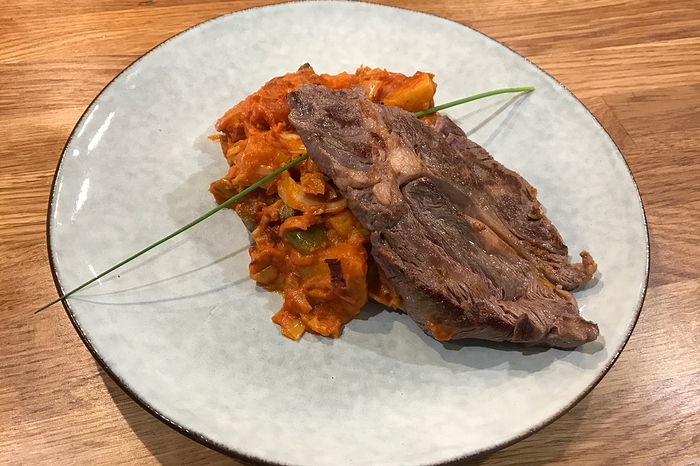 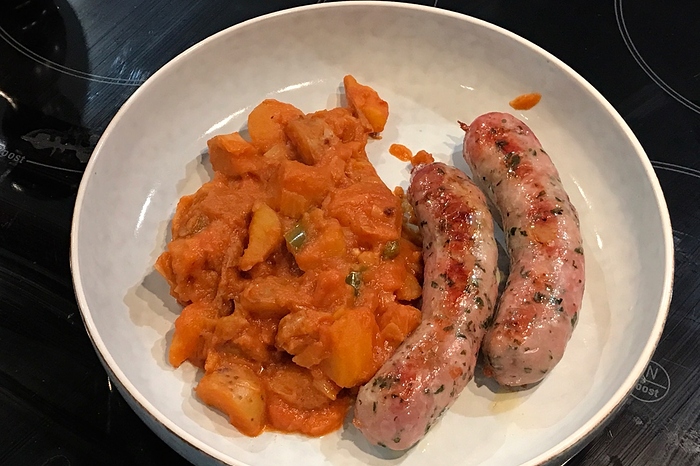 WFD actually they were march meals…(will write the description tomorrow, can’t write when it’s 3:45am in the morning. Need to zzzz now.)

dinner tonight was a freezer-dive - rosemary pork shoulder stew, that wasn’t half bad. over riced cauliflower that i’d steamed in the a.m., then sauteed in a little olive oil when i got home, and seasoned with Penzey’s dried shallots, poultry seasoning, and Maggi. Pretty yum, too.

BF made a nice salad. hah - he’d also made some potatoes, before i told him i wanted to use the cauli - gorgeous crispy fried potatoes - and ate them all right after dinner! i had a bite - i could have eaten the whole pan too, so thanks to him for saving me from myself.

last night was a wonderfully luscious bbq pulled pork sandwich out. soooo good.
night before that was take-out sushi with my sister - ankimo, hamachi sashimi, escolar, amaebi & sake nigiri, and a 49er roll.
night before that was leftovers from a dinner out - Vietnamese. BF added more greenery to the pho tai, and made fried tofu with a sweet chili sauce over sauteed cabbage. really good little gingery cuke salad too. 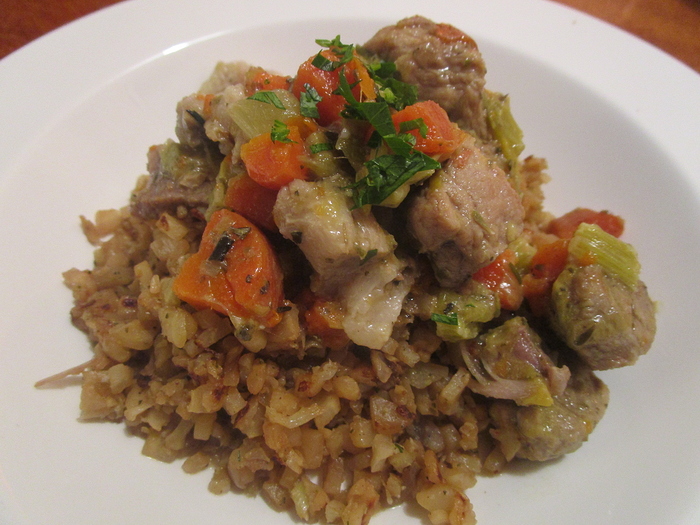 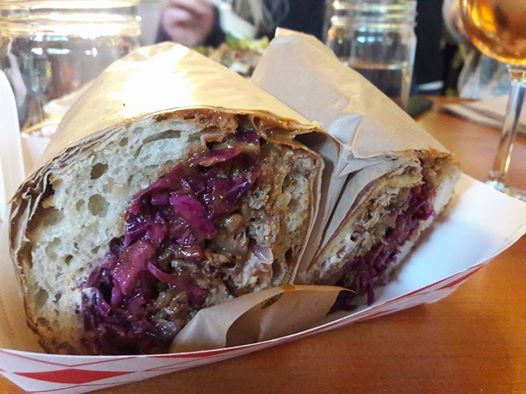 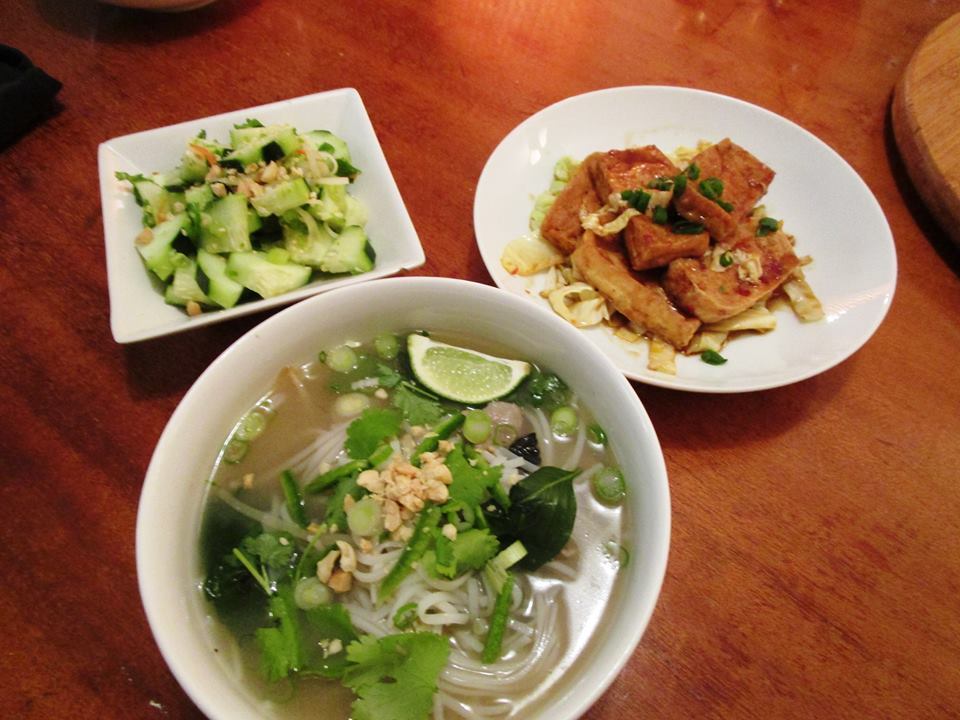 Love especially your pulled pork sandwich ! Love the fact that you both cook, so sweet! 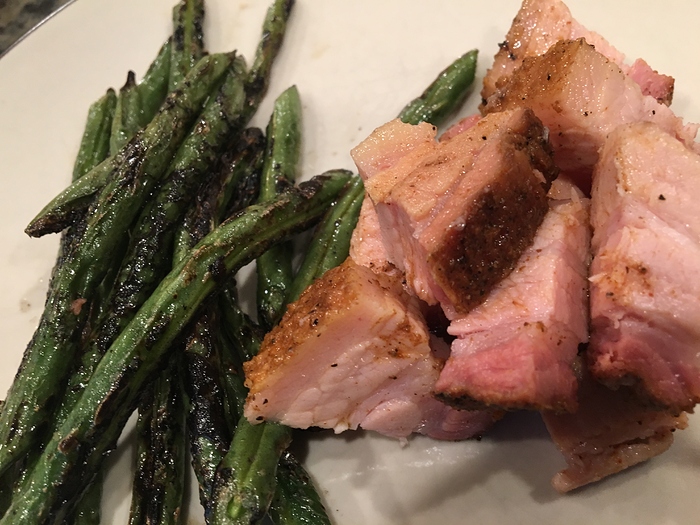 looks like I am grilling a boneless lamb sirloin roast . Mashed potatoes , and peas . Bottle of wine to drink .

And I spent the day watching a “Say Yes To The Dress” marathon. Even though I’ve never been married, and don’t expect to be, I was stupid-happy watching women be happy. I’m a weirdo. :-o

Dinner was a mish-mosh of flavors, but it actually all worked.

Frankenchicken breast was cut in half lengthwise and slathered with a combo of olive oil, salt, pepper, minced fresh rosemary, thyme, and garlic, as well as some ground sumac. Then baked. The chicken was removed from the pan, some white wine was added, and then a Tbsp. or so of fig-pear jam that was in the fridge. Weird. But it worked. 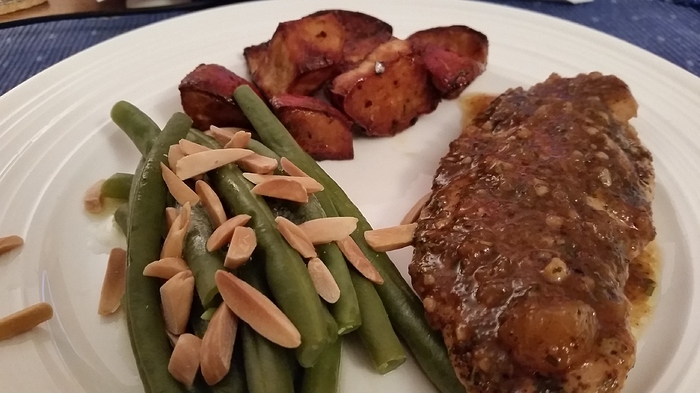 No idea what’s on TV tonight. I’ll watch whatever intrigues as I click “up” on the remote. 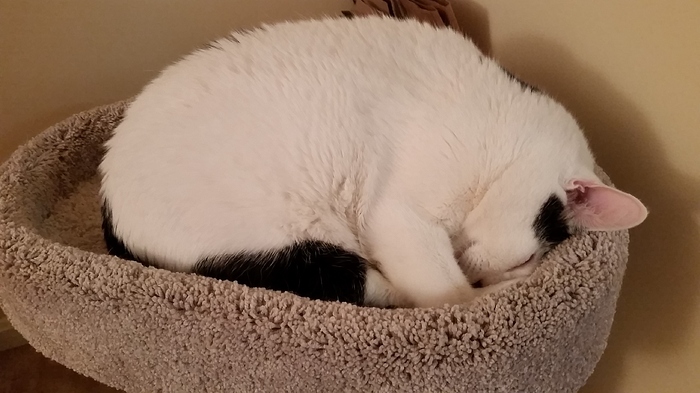 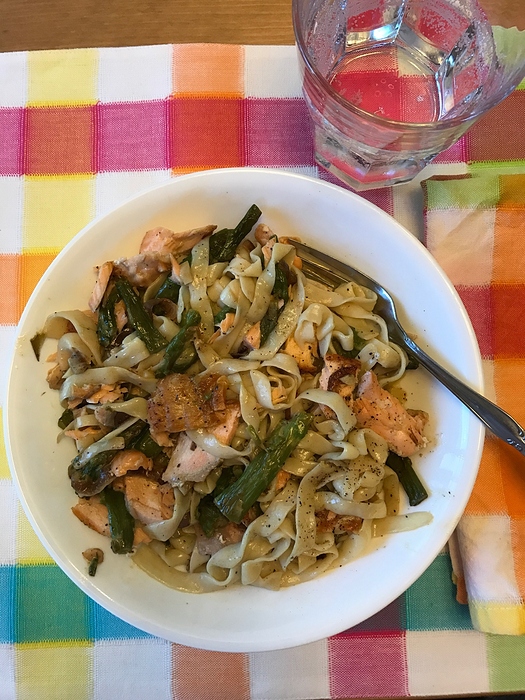 It was really warm today here & I didn’t want to cook much. Welcome to Leftover Supper. Sautéed leftover red onion and last of the garlic. Tossed in a splash of fish sauce, dry vermouth and cream. Added leftover pan seared salmon & leftover roasted asparagus. Served over tofu noodles. Fizzy water to drink. Pretty darn good. Small girl child ate a quarter of it before she decided it was “icky”. BTW this is my first food picture.

Nice food shot . Looks great . My pictures are nowhere near yours . I want that .

thank you! we do both love it… his plates are always so much prettier than mine, with his art-school background!

and a nice job you did of it! i like the idea of the fish sauce with the vermouth and cream…

Thank you for the compliments. Fish sauce & dry vermouth/ruby port are my secret weapons. Even Hubby hasn’t figured it out yet, which is a good otherwise he wouldn’t eat it.

What type of tofu noodles do you use? They look delicious! 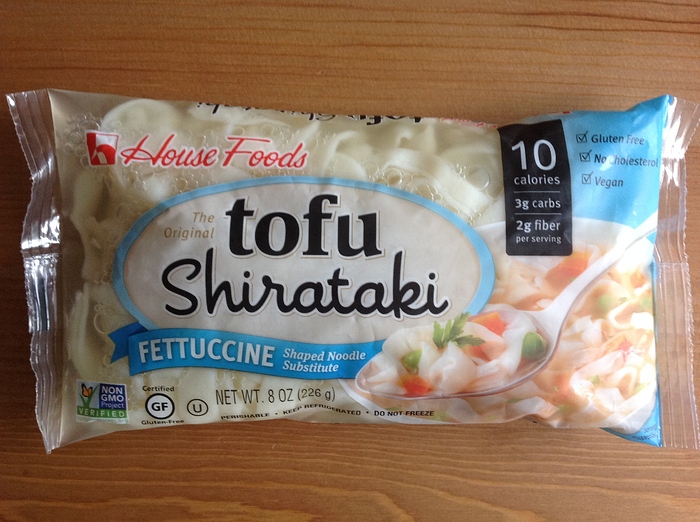 Here is a picture of the package. They also come in angel hair, spaghetti, & maccaroni shapes. I try to follow a low carb lifestyle & noodles are my downfall. I’ve found them at Whole Foods & Safeway in the refridgerator section all over the country. You can also order them on Amazon. The key to using them is to first drain off the “brine” & rinse very well. Then saute in a hot non-stick pan (no oil) for 2-4 minutes (it dries them out & give a small sear). When your sauce is done add them to sauce to heat through.

@Redheadcook, glad you have joined us. Your first food photo is fine. I cringe when I look at my old(er) food photos. Have to look through my archive to find my very first one. Well, go on.

@LindaWhit, on the same channel I like watching “Secret Eaters” (I think that’s what it’s called, no?) and “OCC” (obsessive compulsive cleaners). The latter makes my stomach churn OMGOMG

Remain your weirdo self!

@Scubadoo97, I like it. We are the few who still enjoy eating pork belly these days. And carbs.

I’m a low carber too - glad to see a compatriot on the board! I have used the shirataki noodles before but hadn’t seen that shape - I’ll have to keep an eye out.

Tyrolean style dumplings with too much cheese (Comté and aged goat’s), chard and Speck. Meat was venison steaks. Stir-fried more chard in the same pan with some garlic. 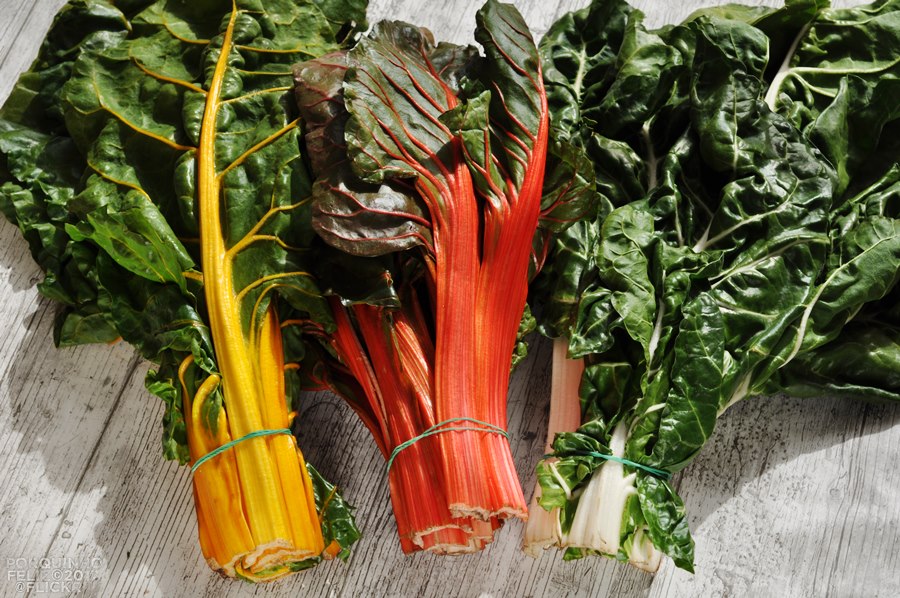 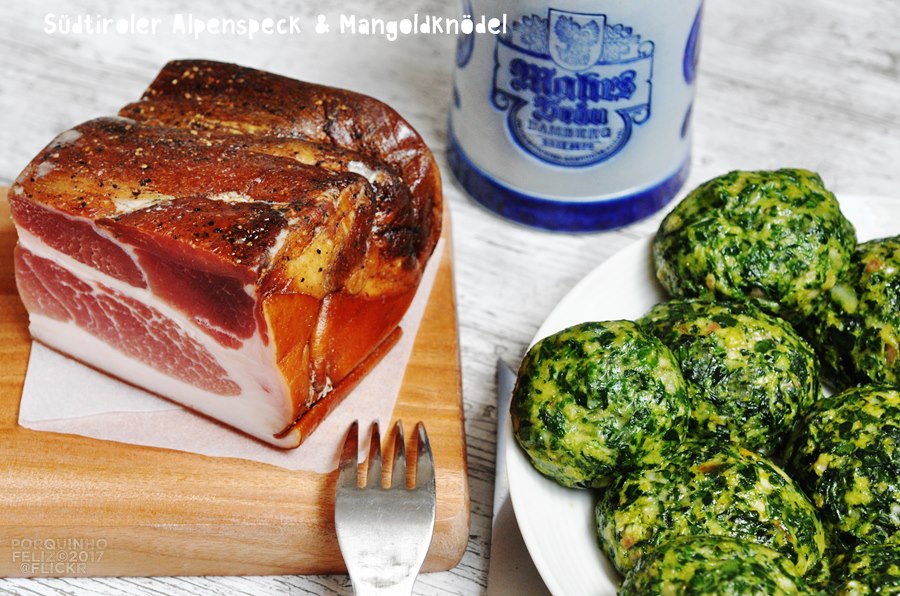 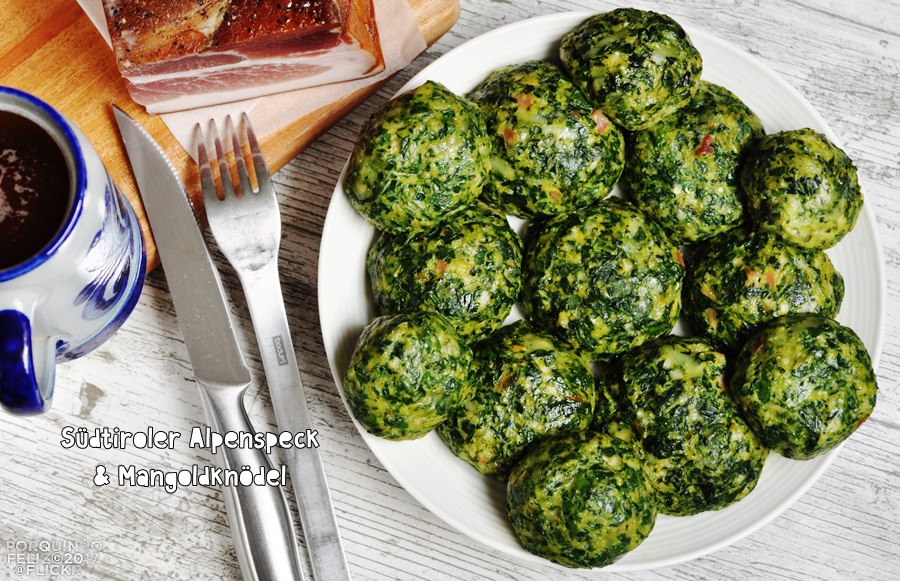 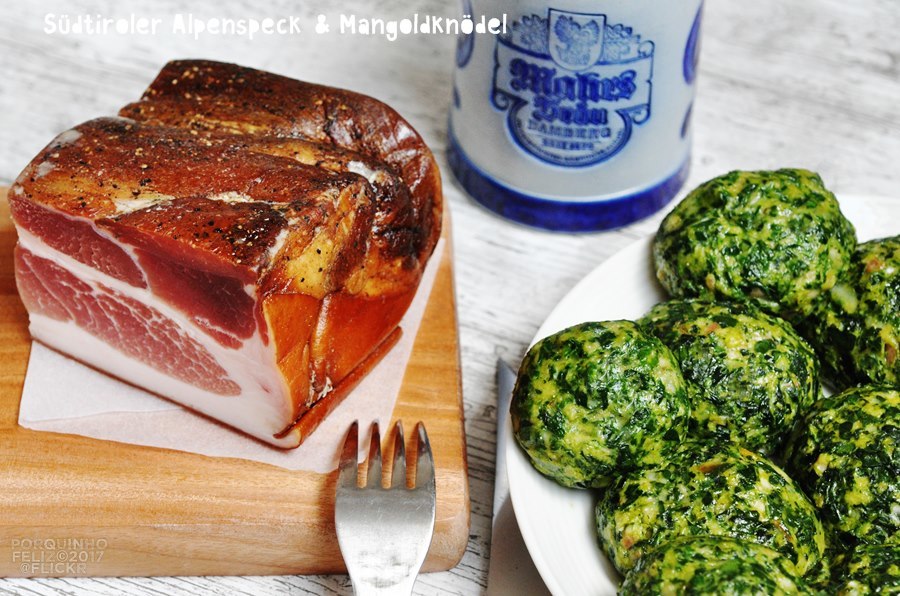 Now, this is something to sit down to!

Driving till 9 tonight, so I got all the prep work out of the way & my man will only have to deal with putting the taters in the oven and the pork on the grill.

5 Likes
next page →
“Food is a pretty good prism through which to view humanity.”
― Jonathan Gold
Market stall in Lima
Credit: TXMX 2