Restaurants DOING IT RIGHT in the pandemic

Not restaurant-related, but Walmart, Home Depot, and CVS have announced that they will serve customers who refuse to wear masks, so I guess I won’t be going into them real soon.

Look, I understand that staff in these stores are being threatened and even shot at, but that doesn’t change the fact that this decision makes those stores less safe for other people. If they decided not to stop people from firing guns in the store, I’d understand, but I wouldn’t go there either.

And the same applies to sloppy restaurants: they can cater to those who are careless, but they’ll lose the careful.

We’re following the safer at home recommendation and haven’t been out for dinner since February. And, we used to go out on average once a week. I do need to grocery shop but have crossed off those markets where I’ve found staff and customers too casual about masks, social distancing and so on. Once this pandemic ends, I won’t be in any hurry to return. Lately, I’ve noticed an enormous disregard for mask wearing which means I’ve gone back to on line ordering, delivery and curbside pick up. Seems once rules were relaxed, many people went back to how things were in 2019.
I’m a pretty decent cook and baker. Can work with that’s on hand in the pantry, fridge and freezer. In that respect, I suppose that sums up HO. But, what do people do who can’t cook? Eat out? Take out? Microwave frozen meals? Live on chips and salsa? Dunno.
Could be worse. I’m grateful for and inspired by this group. WFD chez moi tonight - bacon cheeseburgers on the Weber. Country captain tomorrow night.
Beer and wine every night with an occasional A&W root beer thrown in.

Before the pandemic, we ate out five or six times a week. The only sustained cooking I did was for Passover. Now it’s like Passover has never ended (but without all the additional rules).

We have done some take-out and prepared foods from the supermarket, and use Indian pouches, and I have a couple of dozen meals I’m cycling through. We have our big meal at lunch and often skip an evening meal all together. We miss eating out, but are not eager to brave the crowds.

We had dinner outdoors at Piccola Italia in Ocean tonight. They go in the doing it right category.

All servers (and the Chef when he came out to visit) always masked, tables spaced correctly and menus and payment option by phone.

The cocktails and food were excellent as always.

We ordered takeout from Kenko Sushi in Lincoln Park for the first time. They were voted one of the best sushi rolls in NJ. They have no phone number, so you have to download their app and place your order and pay through the app. They message you when it’s ready. By the time I got there my food was ready. I went indoors and picked up my order. The person was masked and they had a shield by counter where they hand you the food. It’s a small place and they only allow one person in at a time. The other customers waited outside 6 feet apart and were fully masked. Details and pictures in the main WFD thread below.

Thanks! It was too hot and about to rain, so we ate indoors

Back pre-CV The Sprout and I would occasionally go out to lunch during the week, something we haven’t done since early March. Until now. As it is local summer and we saw an amazing picture of their Carbonara pizza we decided to head over to Port Pizza (AP location). We got there just as they opened at noon and there were already a few people waiting. Everyone wore a mask and were spread out while waiting. I imagine there may more of a crush later in the day/evening.

Though there were a couple of people sitting at the bar we opted to sit outside as we are still not ready to eat inside and it was a beautiful day. They led us to a table in the back - it looked like they were filling tables back to front. All the tables were well spaced out and each was probably at least 6 feet long so you could conceivable to go with a friend and eat together while six feet apart. All staff members had on masks. We try to keep our masks on while sitting unless eating. I think its the polite thing to do though not every one there did the same.

I took a quick peek inside and everyone I saw had a mask on. There are only maybe 12 tables in the main room and they were well spaced. I didn’t get a chance to see into the private rooms.

The pizza was delicious as always. 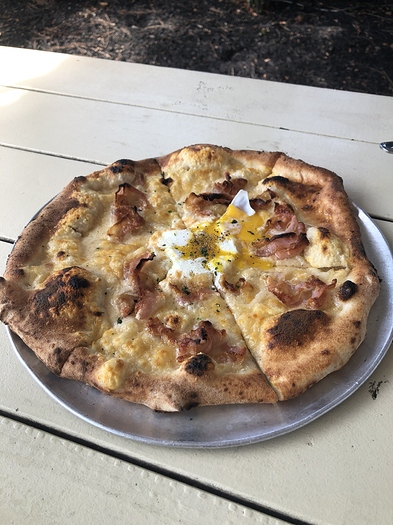 We tried to go to Porta Sunday evening around 6, turned the corner and there were a good 30 people waiting and not a lot of masks.

Went Monday for lunch after the beach, and we actually ate inside at the bar. They only allow people at each corner of the bar and we sat at the corner closest to the open garage doors.

Everyone working had masks and we did see some customers leaving the restrooms heading back outside without their masks on.

You were bold to try on the “last” Sunday of summer. Even in the best of times I stay home holiday weekends! It looks like Porta is taking reservations now so maybe we’ll try that at some point.

My “quick peek” inside was on my way to and from the restroom but I didn’t see any other customers walking around so can’t comment on the masks. There was a very chatty and maskless group sitting outside though. They were having a whole lot of trouble understanding the menu but our server remained amazingly professional.

We live around the corner so it’s not much effort to walk and check it out. I knew better but the wife wanted to give it a shot.

I might guess that walk afforded benefits other than pizza.

11 posts were merged into an existing topic: Surf BBQ, in Rumson, NJ

Hey folks, we did have a sub conversation going on that was a bit off topic for this thread, so I moved it to the thread I believe it was more appropriate for. So if you have any more comments regarding Surf BBQ and any other observations or experiences there please share them on that thread.

As always thank you for your participation and understanding! If anyone has any questions or concerns please PM me, thank you and stay safe!

It was me, my son and nephew last night for dinner. Given our current circumstances there is no way in hell I"m going to NYC for a boys night out, so off to a local alternative Gabriella’s. They build a very nice out door patio and bar, with 1 massive umbrella which covers about 4/5 tables and smaller umbrella’s along the parameter of the patio. Tables are well spaced and they had several electric and gas fueled heaters out there which made the mid 50’s temp bearable for the night. All employee…

3 Likes
← previous page
“Food is a pretty good prism through which to view humanity.”
― Jonathan Gold