Let me suggest “Expense Account Chinese” or “Hella haute” as a category name.

I still remember when I first arrived in the Bay Area years ago, when I worked in the financial district in SF. A coworker told me that Yank Sing was a favorite of an Italian boss. And he’d order all the expensive stuff when lunching with my coworker and the bill would came to $90 a person. That was astounding to me at the time who considered paying $30 for a meal to be extravagant, and $5 pork chop rice plates were the norm.

A different boss took me and our group to Yank Sing. We were a bit more restrained and it still came to $50 a head. I don’t think I’ve hit the $50pp dim sum threshold since then in the Bay Area.

Of course, I haven’t visited Hakkasan or Crystal Jade.

Yank Sing has this, um, policy that when you’re seated, someone comes over with a glazed Chilean sea bass “special”. They don’t tell you that it costs $35 (ISTR).

Once we were finishing up a security audit at a colocation site up the street. We were going to celebrate with dim sum at Yank Sing. The auditor (from a business partner) tagged along, and promptly ordered two of the sea bass dishes, as well as several other expensive ones. Our company paid the bill, around $250 for four of us. We thought it odd that the auditor let us treat him. When we asked his boss about it, she said, “Oh, he always does that.”

I haven’t seen full menus of these yet. If their menus reflect the early word on Yelp and elsewhere, I’ll integrate them into their respective categories above.

Why Hunan? Chang’an is the ancient name for Xi’an, and the Yelp reviewer mentioned that the best dish to order was biang biang noodles with cumin lamb, so 2+2=??

Ha, I got distracted while posting. Thanks for the correction.

Hunan got into the mix because of a report on Chowhound that Hunan Home in Chinatown has new owners. ABC records confirm. It’s owned by Louis Kuang, who owns (primarily Sichuan) Grand Hot Pot Lounge and Hunan House in Chinatown. Current Yelp menu pics from the business owner in Nov. 2017 show Hunan Home as having the same menu from before, Hunan smoked pork and mostly Chinese American dishes.

That would be the former Hunan Home’s (sic) It had good food but you had to cherry-pick the menu.

If Kuang makes it a real Hunan joint, that will be one spicy block, with it joining 3 Sichuan restaurants on Jackson St. and Chong Qing Xiao Mian around the corner.

I reclassified Yiping under Chongqing based on the current menu and owner’s origins.

Also, anyone know what the deal is with Apple Green Bistro in Cupertino village? They started as a sushi/Dongbei/Sichuan place and now are mainly Sichuan, and I recently received a private message that their cooking is excellent. Some notable dishes that weren’t part of the Bay Area repertoire until recently:

I can find no record of an association with Z&Y/Chili House, but their web page has the same style and even some verbatim sections about Z&Y owner “Chef Han’s recommendations”. 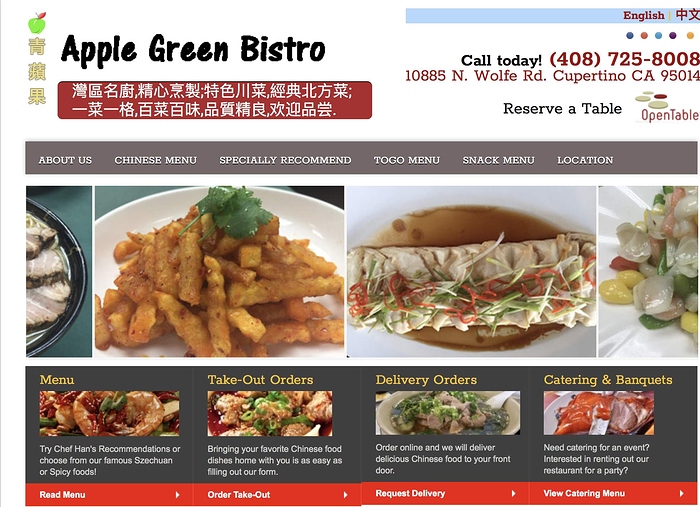 Thanks for a Herculean effort (or should I say Sisyphean effort, the way restaurants keep opening and closing and changing menus).

A couple of notes:

I believe the dumplings from Happy Dumplings are Tianjin dumplings, not Shandong dumplings.

The last time I was there, Gourmet Noodle House had spliced a Wuhan menu
onto its Shanghai menu.

Are the “round noodles” at Xiang Xiang buckwheat or naked oat noodles? I’ve been looking for the totally tubular noodles, maybe you mean something else.

Thanks again for your feedback and careful eye. I’m grateful for your and everyone’s continued feedback and tips— aside from the openings/closings I have scripted, the substance of this project is grounded in the community knowledge of Chowhound and Hungry Onion, and thrives on their continued participation to grow.

What’s a signature of Tianjin style dumplings, and is it just the dumplings that are Tianjin style, or is it the pan fried bao as well? I put Happy Dumplings as Shandong because they have described their Shui Jian bao as Shandong style pan-fried bao.

I’ve not eaten the buckwheat noodles at Xiang Xiang, but descriptions are that they are round in the sense that spaghetti is round (presumably via extruding). I’ll clarify above— I recently enjoyed the oat noodles, the ones presented like a honeycomb, at China Poblano In Vegas and hope we get something similar here soon! (In the meantime, I’ve been tossing chili oil in my steel cut oats

It’s funny that Gourmet Noodle House, with their new Wuhan specialties is just a few doors down from General Tso’s, which is more Wuhan focused. I’ve seen Wuhan duck all over the place, at Sichuan and other places in the South Bay, so I’d like to keep the Wuhan/Hubei section restricted to places with a broader range of Wuhan/Hubei items. Edit: oh, they have “Wuhan Sesame Noodles (presumably regan mian)” according to your post— lemme find out their current menu and reconsider.

I believe James’ wife and extended family are from Tianjin, and I’ve always associated the pouch-shaped uumplings (as opposed to crescent-shaped) with Tianjin.

Kudos to @DrJimbob for launching a Regional Chinese project for the Boston Area! Based on a some useful tips from him, I tweaked the format of the Google map in the original post.

I might as well take this opportunity to discuss highlights and disappointments from 2017. I’ll open up a discussion about dish-related trends at a later time.

Closures
As eloquently reported by @sck, Wenzhou Noodles didn’t survive the year and will be missed. As for other 2017 closings, two of the four Guilin/Guangxi restaurants closed.

Openings
Of about sixty openings that made it onto the list, twenty-three were from the stretch encompassing San Leandro/Newark/Fremont/Union City/Milpitas. To my knowledge, all are independently owned. In contrast, only six mom and pops opened in San Francisco.

Some notable openings in 2017 (in alphabetical order):

Of eleven Michelin recognized Chinese restaurants (1 star for Mister Jiu’s, 10 bib gourmands), six are non-Cantonese. Me thinks the inspector prefers spicy, or thinks our other offerings are not up to snuff.

Of eleven Michelin recognized Chinese restaurants (1 star for Mister Jiu’s, 10 bib gourmands), six are non-Cantonese. Me thinks the inspector prefers spicy, or thinks our other offerings are not up to snuff.

Me thinks if @night07 keeps writing about Cantonese restaurants, then the Michelin inspectors will visit more of those places and give some of them Bibs and stars!

Me thinks the inspector prefers spicy, or thinks our other offerings are not up to snuff.

But I also think that many Cantonese restaurants simply can’t be bib restaurants. Cantonese meals are social occasions involving at the very least, a family, and at the most, multiple families. The good stuff-the soup, the seafood, etc. are large in size and meant to be shared. Michelin inspectors, showing up maybe in pairs, wouldn’t know what to do with the ordering and can barely get anything to eat. Someone like Brandon Jew gives them a manageable menu and smaller dishes that fits into the French mold, then they know what to do.

Me thinks if @night07 keeps writing about Cantonese restaurants, then the Michelin inspectors will visit more of those places!

Indeed! We need to organize some group meals to follow up (or join) @Night07 ‘s recommendations.

I hear you about the conflict between Michelin Star criteria and Cantonese dining. My point was geared toward the Bib Gourmand category being split between spicy and Cantonese. Four of their selections are pan-regional (MY China) or dim-sum/Cantonese (Yank Sing, HKL 2, Lai Hong). Of the six-remaining, only Great China isn’t Sichuan/Hunan. Their guide https://www.viamichelin.com/web/Restaurants/Restaurants-San_Francisco-_-California-United_States?sort=price also mentions Koi Palace, Yummy Szechuan, and DTF (San Jose search).

But I also think that many Cantonese restaurants simply can’t be bib restaurants. Cantonese meals are social occasions involving at the very least, a family, and at the most, multiple families.

That got me thinking about possible bib gourmand places. What about those three trifecta of carb goodness restaurants? Congee, fried rice, and noodles? I’m thinking cooking papa in foster city could fit the bill (don’t they have a michellin mention? I recall seeing a poster there). I’m not sure the HK style cafes will ever make a Michellin mention in SF guide’s though I do honestly miss Our Court Cafe (it may have been a bit msg-filled but I loved their macaroni and ham in soup and their baked rice dishes.

With @sck, I think Chinese food in general (not just Cantonese) is at a disadvantage in the Michelin sweeps because it is best experienced family style, which conflicts with Michelin’s individual diner approach.

I also believe Michelin reviewers favor Thai because they can use a fork without embarrassing themselves.

That got me thinking about possible bib gourmand places. What about those three trifecta of carb goodness restaurants? Congee, fried rice, and noodles? I’m thinking cooking papa in foster city could fit the bill (don’t they have a michellin mention? I recall seeing a poster there). I’m not sure the HK style cafes will ever make a Michellin mention in SF guide’s though I do honestly miss Our Court Cafe (it may have been a bit msg-filled but I loved their macaroni and ham in soup and their baked rice dishes.

There are a few such restaurants that got recognitions in Hong Kong. Ho Hung Kee got a star, Tasty I think is a bib. I eat at Cooking Papa, but I think there is still a large enough gap in quality between CP and these, and CP doesn’t stand out significantly enough over other local congee-fun-noodle-rice houses that I found it hard to justify a Bib recognition. With that said, I will continue to eat at CP, knowing what they are good at (and not so good at).

I think CP got profiled in the guide.