The two Xi’an dumplings, Pork and vegetarian, sound appealing as do several bao. Their XLB section has a few novelties: an $10 XLB and a Tom Yum XLB. A few of us tried a version of the latter at Tai Wu in Millbrae which is where one of Dumpling Time’s chef’s, Do Leung, used to work.

They open next week. Let us know if you have a chance to go there.

Anyone brave the lines? There was a 10+ person line out the door at 1pm on a Friday afternoon and their webpage says, “Our dumplings are made fresh daily with limited quantity. ITEMS CAN SELL OUT AT ANY TIME.”

Our dumplings are made fresh daily

One would hope so.

My friend was gonna take me to Thai place on the opposite side of the street but since this was open and new we tried Dumpling Time out.

It’s a busy and Noisy place. Small and tight space. Big screen with videos on and loud music so everyone was shouting to be heard.

Food I tried was just so-so. Dumplings were tiny and tasted ok, gyoza was good, but tiny. Green beans salty. Pickled veggies were ok. Sweet buns 3 different ones were mild with some cream inside.

Kinda pricey. I might go back, but not in any hurry.

I liked it well enough. It was about an hour wait for three of us on a Wednesday night, about the amount of time I’d spend on public transportation getting to the dumpling spots in the avenues. We managed to get beers while we waited in the outdoor patio, and I studied the stuffing and pleating technique of the cooks through the window to pass the time. I made air dumplings.

Chicken bao were tasty enough. I wanted the char siu bao but one of us dislikes how sweet they tend to be. Pork gyoza came lukewarm. I liked the pork xlb better than my friends. They come in little aluminum cups, and theirs stuck and ruptured. The skins are quite thin. Mine were more agreeable and did not make a fuss when I extracted them. But I suppose I ruptured when I accidentally spilled the broth from my second one on the table. I did not care for the Beijing noodles, or zha jiang mian. The noodle texture was fine, but the ground meat sauce was meager and flavor shy. Maybe I’m just too Korean to enjoy Chinese style zha jiang mian.

I know I don’t sound very positive about my meal but I did mostly enjoy the above items. My favorite, however, was the xi’an pork dumplings, simple and satisfying by themselves but garnished with shaved raw fennel, chile, radish, and tender young greens. It was a nice contrast. Last was the har gow with shrimp and cilantro. Large pieces of fresh shrimp in somewhat thin skin. Unfortunately two came with burst skins. They were a rushed order near closing because the kitchen sent us the wrong dumpling.

The place was and will be packed for sometime. The staff seemed overwhelmed and still finding their legs but they were very friendly. I’ll go back to try the shrimp toast which appears to be stuffed into a you tiao or Chinese cruller, and maybe the off the menu siu mai we saw being brought to a table after we’d paid. We asked about them and got a sheepish “uh…they’re…new?” response. So ask about them! Maybe they’ll put them in the menu.

I feel silly for being intimidated by the stories of lines – – it was empty at 11 AM on a Friday, and packed by noon. The ingredient quality carries many of the dishes, and I like the creativity, but I felt like the b-team was cooking the dumplings. 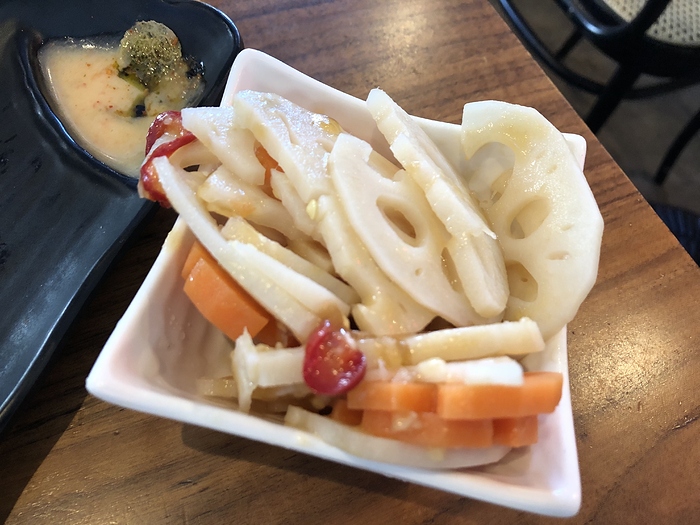 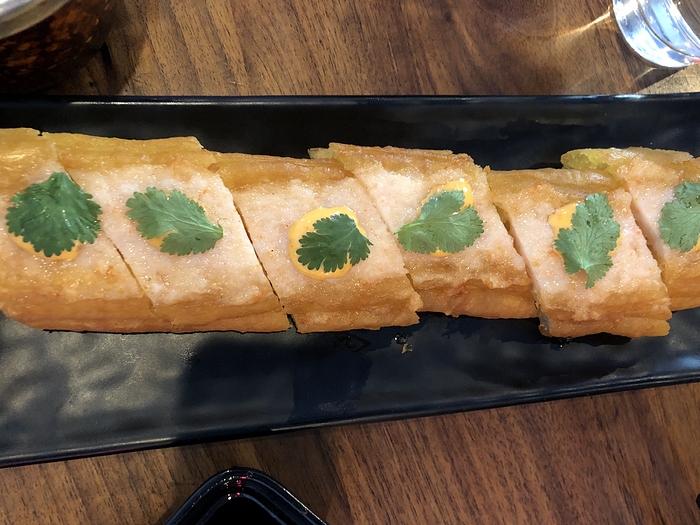 Shrimp toast made with a you tiao (Chinese doughnut). Components all good, but I would have enjoyed a higher ratio of shrimp filling to doughnut. For two people, and an already carb-heavy meal, this wasn’t a good choice. 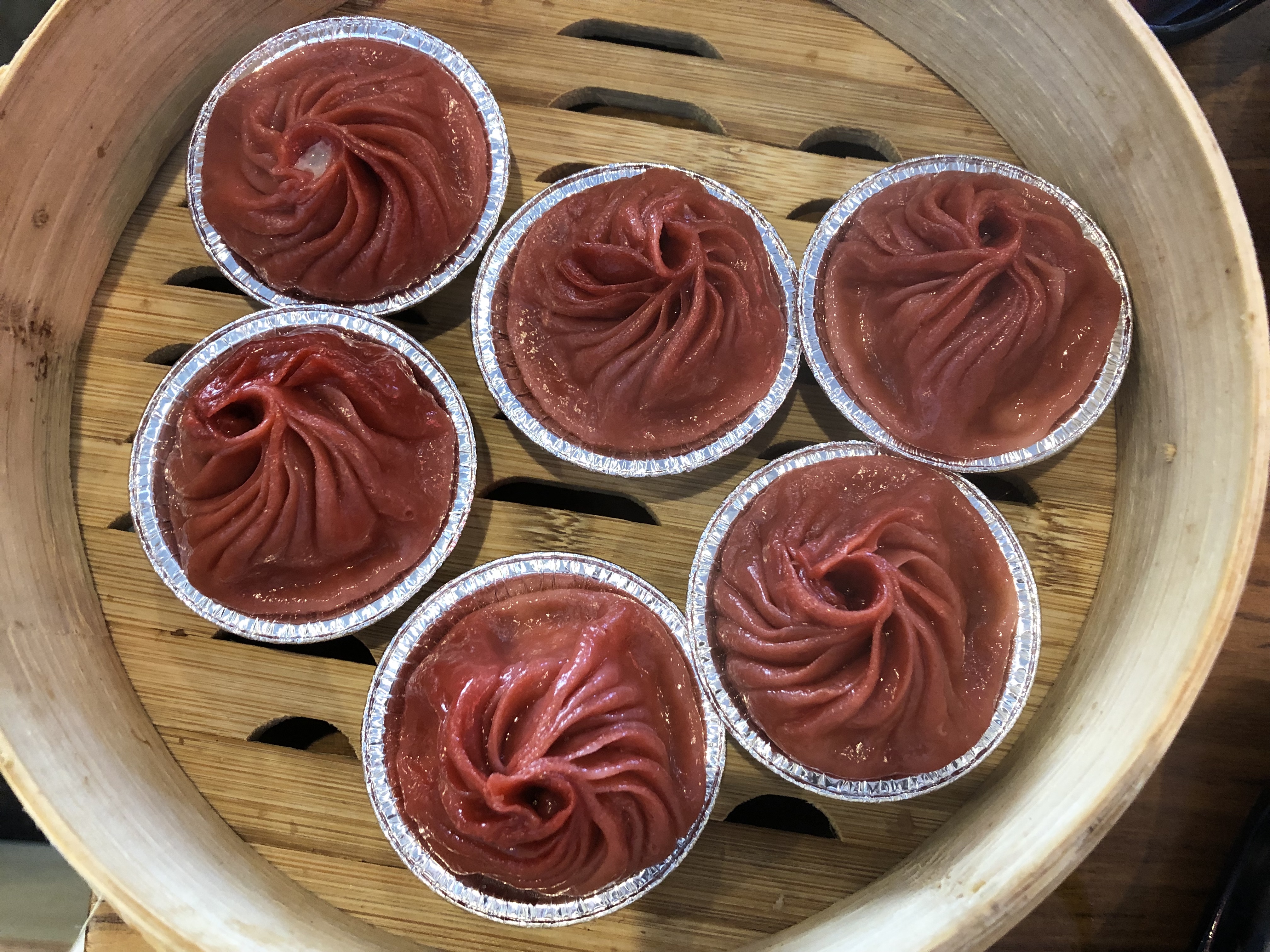 Thom yum Xiao long bao. My thoughts are similar to when I had these at Tai Wu in Millbrae, where chef Do Leung, used to work— soup is good, pork meatball is overshadowed by soup, and the bottom of the dumplings were a soggy, but held together, mess. 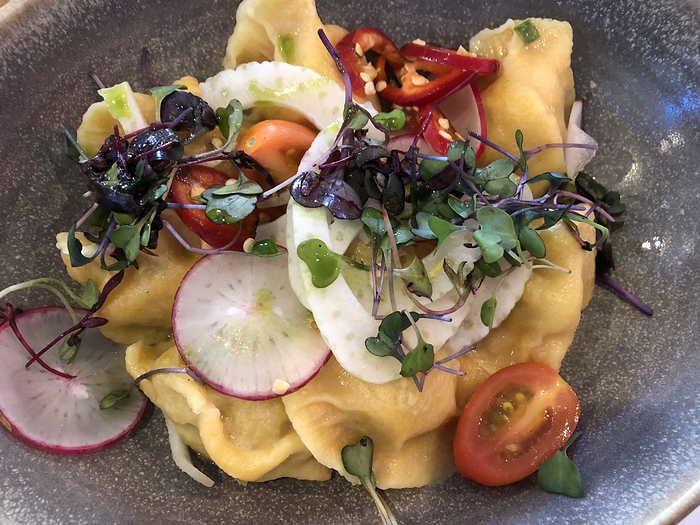 Lovely presentation for the lamb boiled dumplings. Lamb quality and seasoning were as good as I’ve had in a lamb dumpling. Dumpling skins were a bit overcooked, but the whole package was still tasty. 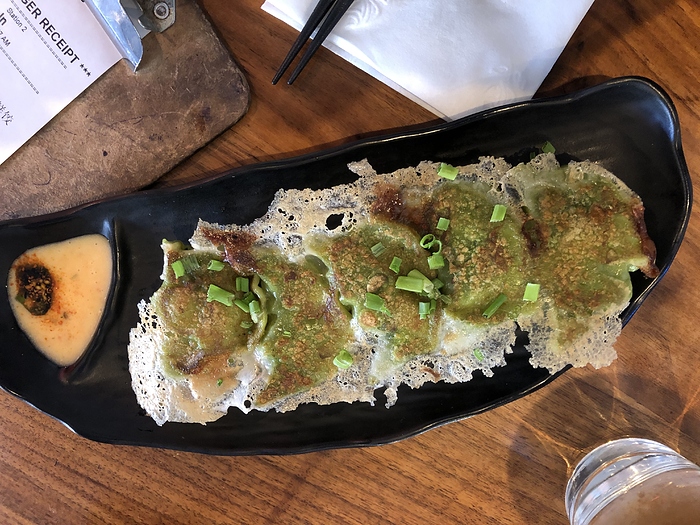 Seafood gyoza nailed the filling-- juicy crab, scallop, shrimp filling didn’t need to be paired with spiced chili butter, but was a pleasant fusiony touch. It didn’t diminish my enjoyment of these much, but I’ll note that the crispy looking bits were actually soft.

I felt like the b-team was cooking the dumplings.

Dumpling skins were a bit overcooked, but the whole package was still tasty.

That’s a bit concerning. Boiling dumpling in water is one of the easiest cooking skills, and overshooting half a minute usually doesn’t change the texture much. Maybe they forgot.

True. They seemed fresh (not frozen) and weren’t waterlogged, so perhaps my perception of it being overcooked had more to with the texture being more toward dense and sticky than elastic. I’d have to eat there a second time to see if that’s more a stylistic thing—- I can’t recall having encountered that exact texture before. They are ample and drained properly.

Overcooked dumpling skins should feel a bit mushy. Like when you boil a frozen dumpling versus a fresh dumpling. The frozen one would need more time to cook all the way through, and the longer time will make the dumpling skin mushy, versus the fresh one can be cooked thoroughly and still retain an al dente skin texture.