It takes a special type of personality to completely renovate a rundown historic building in Japantown/ the former Chinatown, introduce a cuisine little known even in China and virtually unknown in the Bay Area, and rely on a highly laborious technique to produce their signature fish noodles. The owners could easily have gone the easy route and opened a Hunan or Sichuan restaurant. They easily could have found a dingy little dining room to serve their food like many other Chinese restaurants. They easily could have chosen more profitable food that’s quick to make. But they didn’t. Instead the idealists in them probably went the hardest possible route for a family restaurant. Bay Area got a taste of the Wenzhou specialties on the menu, though not for much longer. The restaurant is closing its doors at the end of the year.

As the owner explained, its hard to sell people $13/ $14 bowl of noodles when the food was little understood and the effort that goes into making these noodles were under-appreciated. The Wenzhou fish ball, or the knocked fish noodle is highly laborious. A chef has to pound the grouper repeatedly into strips for the knocked fish. And unlike the Chao Zhou fishball, the Wenzhou version is relatively obscure as a food item.

The owner also commented that the Chinese population from the coastal provinces from Shanghai to Guangdong appreciated the mellow and nuanced flavors of the cuisine, but the population from interior provinces thought the dishes were bland. More familiar dishes got added to the menu to broaden the restaurant’s appeal, but its not quite enough.

I don’t normally comment on the decor, but Wenzhou’s dining room, particularly the upstairs (2nd picture of the dining room) is tastefully done in modern Chinese design that retains elements of the traditional Suzhou/ Jiangnan architecture style. (Of course, Wenzhou is technically just outside Jiangnan geographically.) That is appreciated and should, in my opinion, be considered in diners’ assessment of the price/ value of the dishes.

I asked the owner what Wenzhou specialties she recommended. Here’re her suggestions. 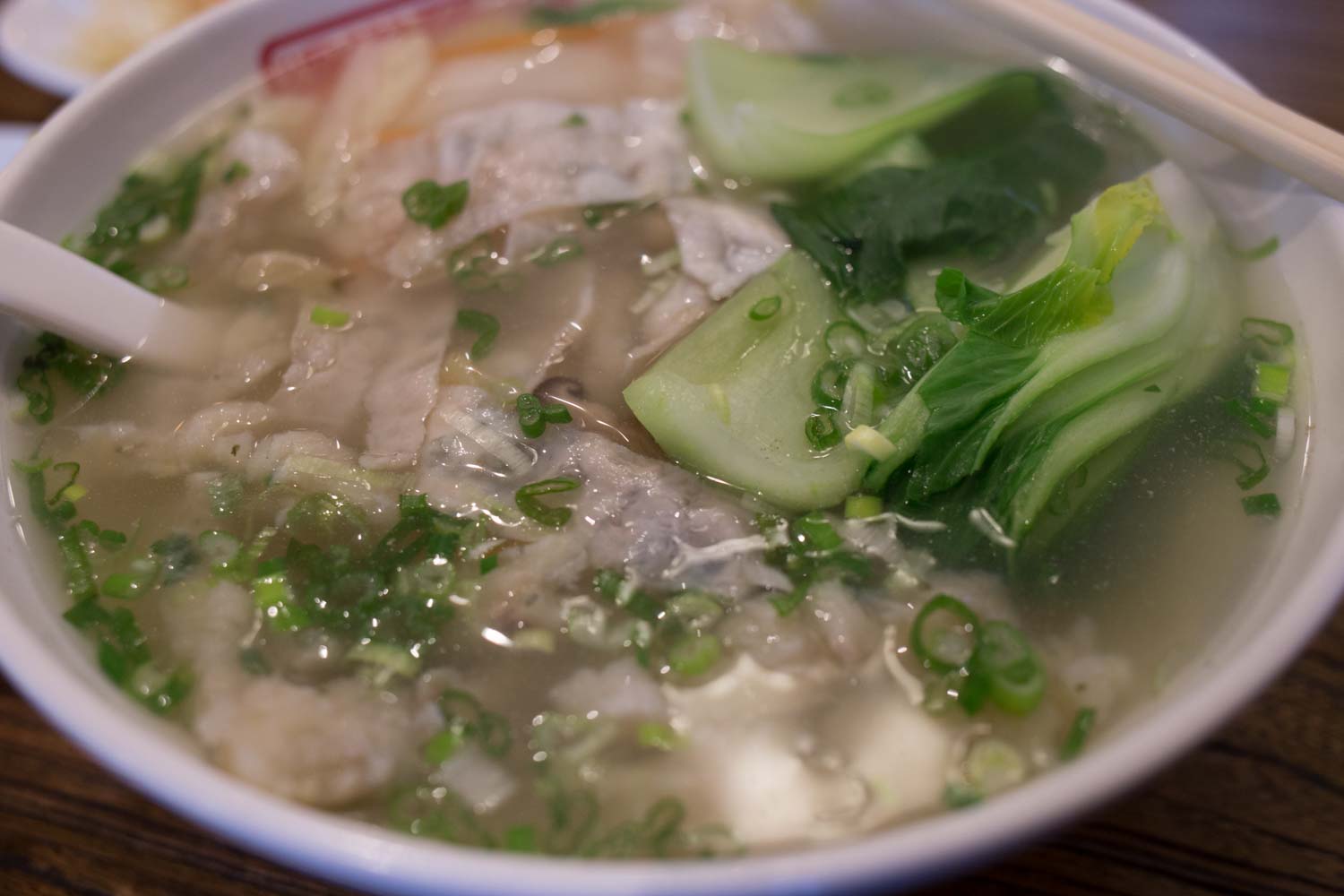 The Wenzhou knocked fish/ fish meatball noodle soup 温州敲鱼/鱼丸面. This was actually a combination of the two classic Wenzhou noodle soups on the menu, and was a large size. I chatted with her long enough and asked her enough questions about the differences between those two noodles that she offered to do a mix and match for me. The pictures are not very clear. But the flat strips were the knocked fish, and the granules were the fish meatball. Unlike Chao Zhou fishballs where fishes are pounded into pulp before forming into ball along with things like starch, Wenzhou’s version contained visible chunks of grouper hand-‘knocked’ into flat strips and then formed into wide ‘noodle’ strips. The fish meatballs were chunks of pounded grouper formed into a oversized vitamin pill shape and is distinctly fishy in taste. Don’t look for Chao Zhou’s bouncy texture because that’s not the goal. The hot soup base was chicken simmered with a dash of vinegar. Strips of pickled mustard (zha cai) added a bit of unami and slices of carrots and baby bok choy added some color. Its recommended that one stir the soup to distribute the vinegar evenly in the bowl. Enjoyable bowl of noodles. 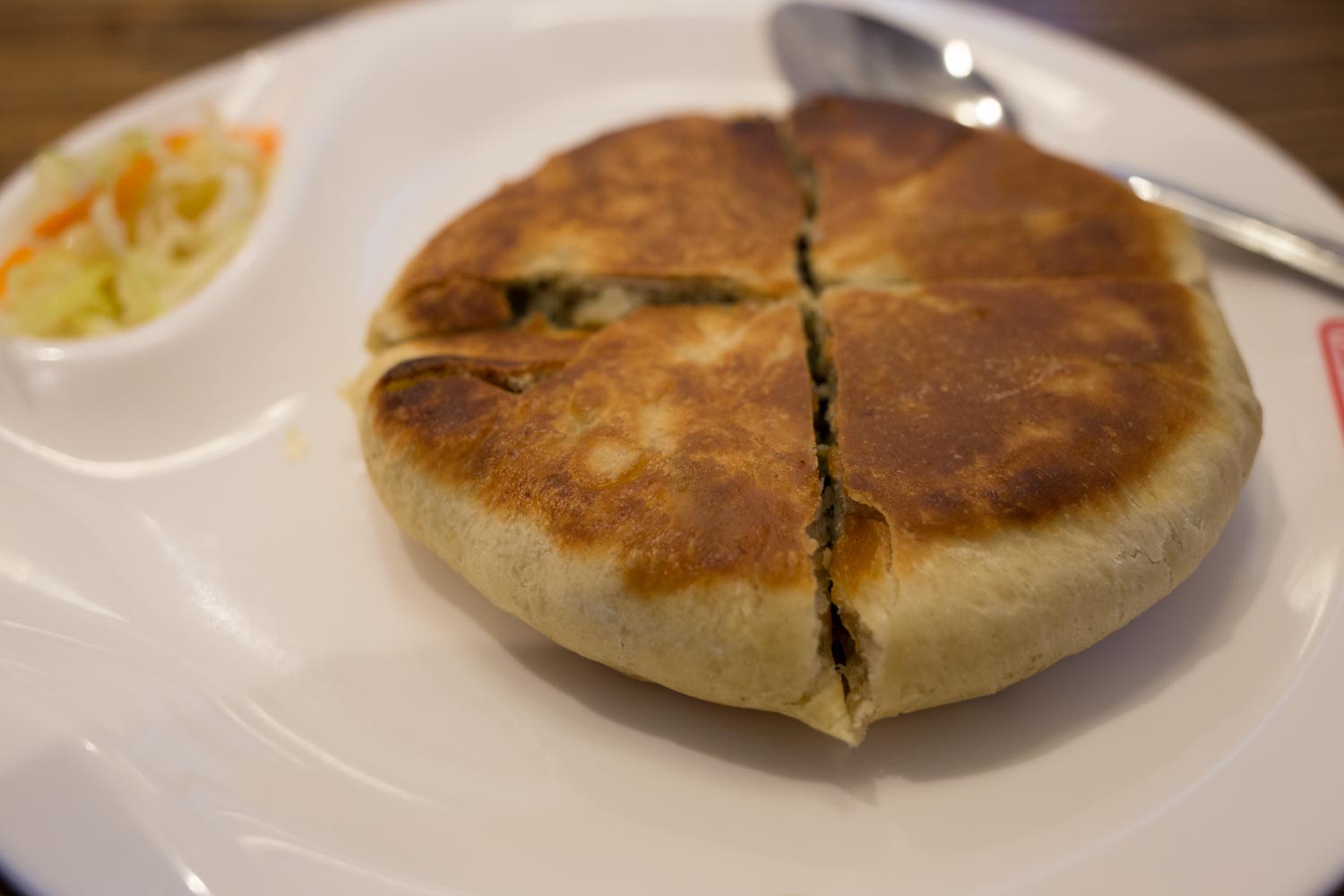 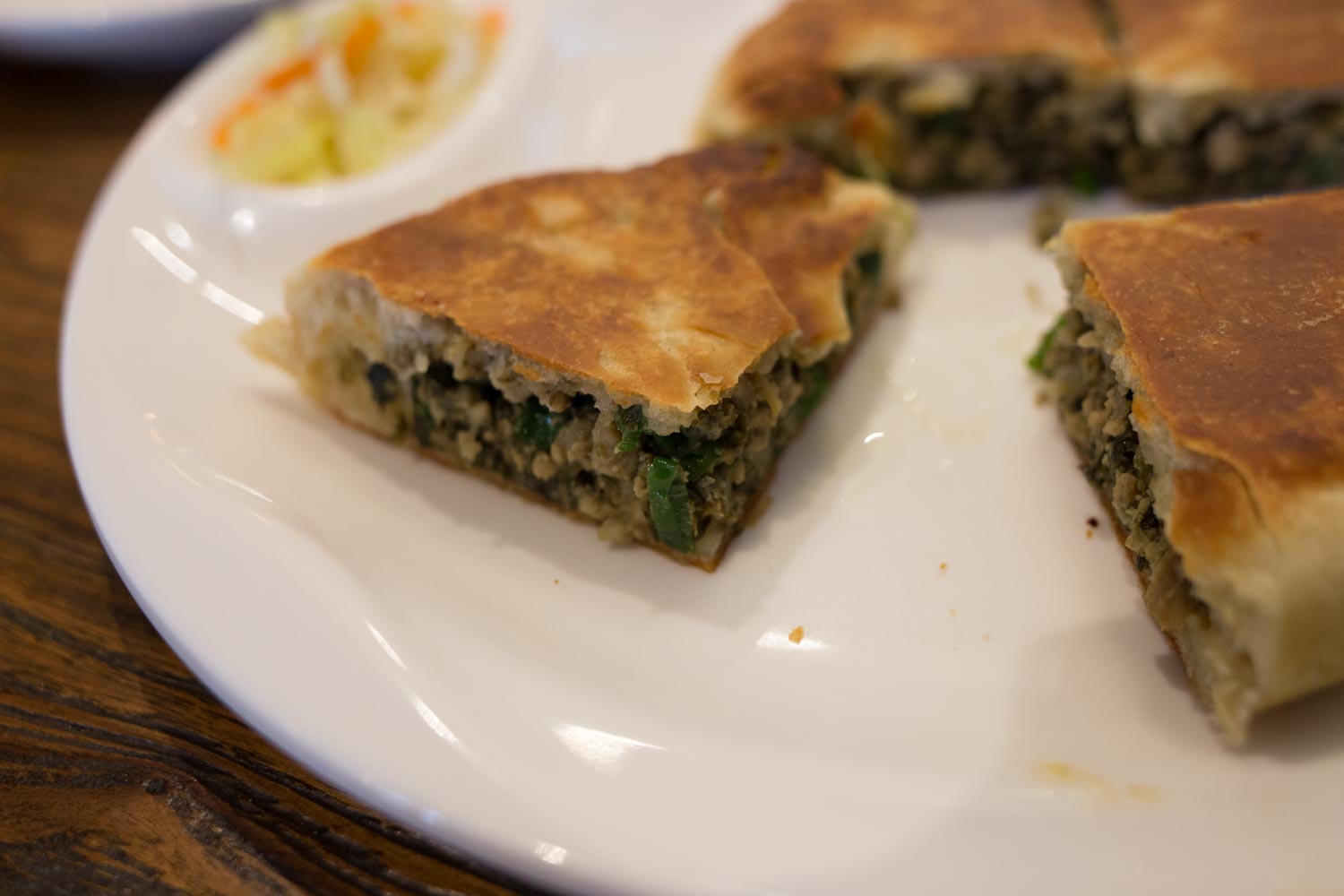 Wenzhou pita 梅菜干麦饼- the classic Wenzhou street snack. I was worried that mei cai, the fermented vegetable and the main ingredient, may over-dominate the taste. In fact, they could probably dial the mei cai taste up a notch. The mei cai- minced pork combination was not bad.

Black sesame mochi. Not necessarily Wenzhou dish but was recommended as a handmade dish. The gluten rice ball with black sesame filling and black sesame powder sprinkled all over was mildly sweet and luxurious in texture when it was served warm. Could certainly give Shuei-Do, the mochi shop around the corner, and its mochi some stiff competition. Enjoyable. 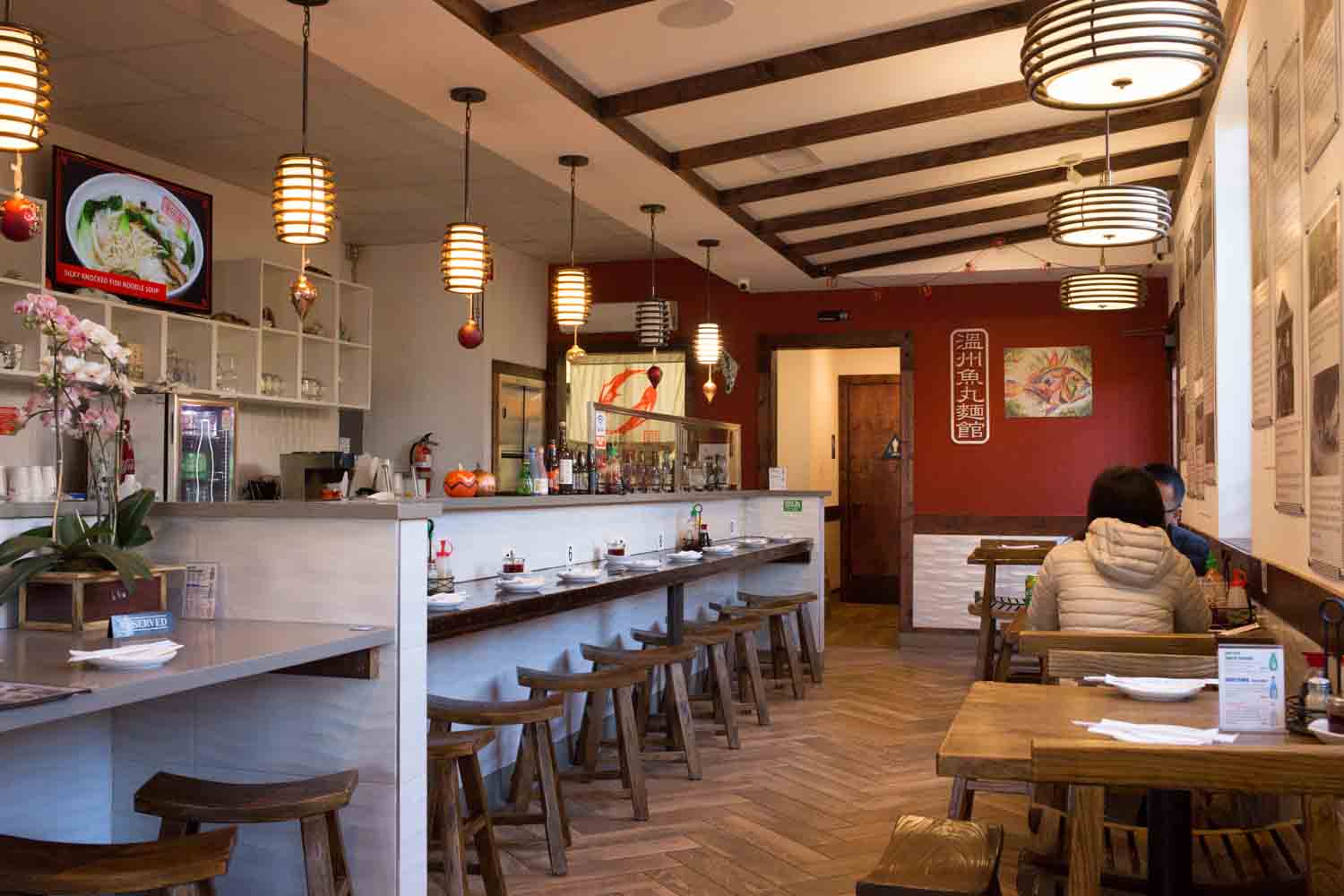 The attention to detail in the dining room was noticeable- look at the chairs all neatly arranged at an angle. The cleanliness in the dining room and the restroom was impeccable. Those backless chairs probably aren’t that comfortable, however. I got one with a back. 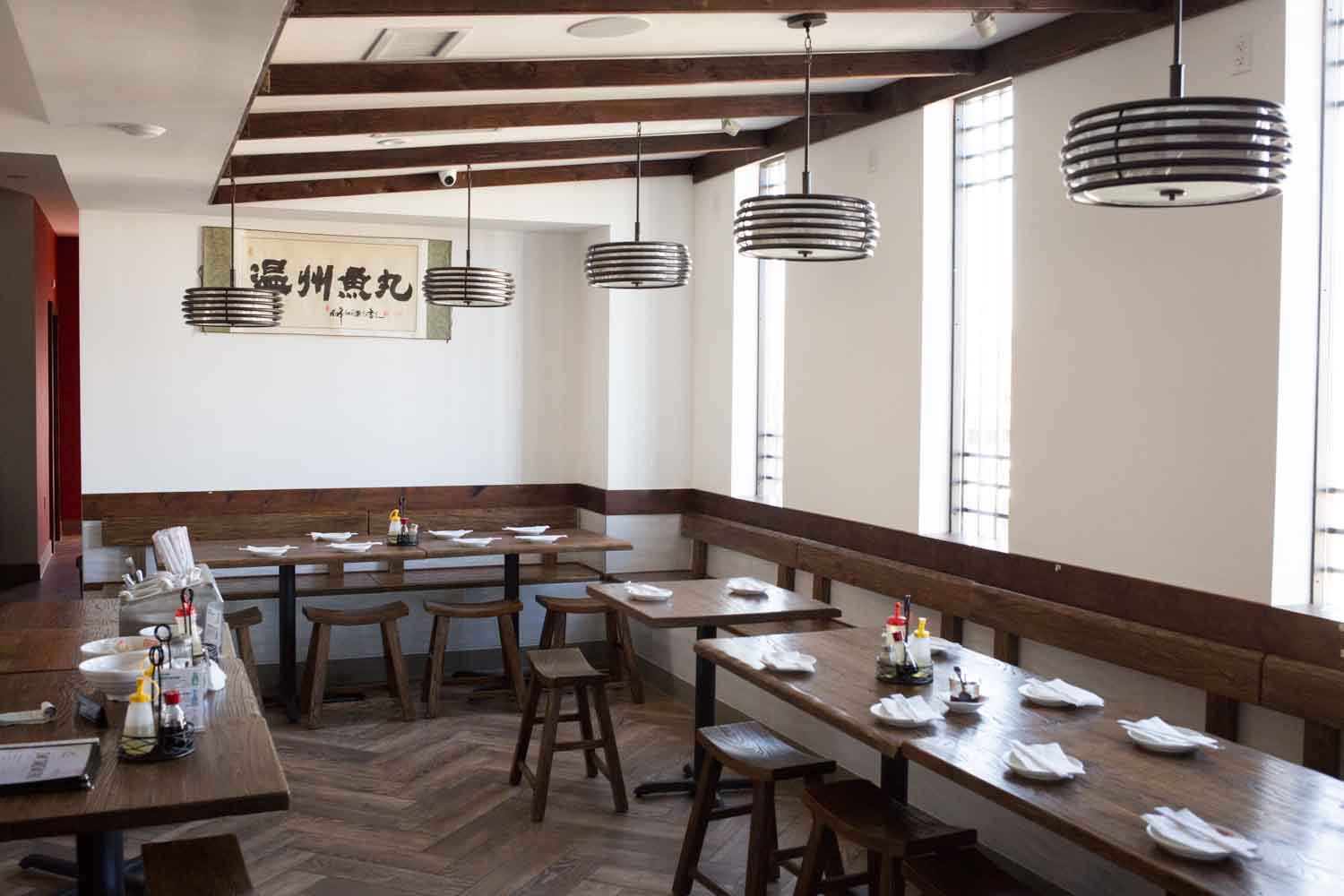 Upstairs. Nice calligraphy too. One would be forgiven to think that he/she is eating in Jiangnan. 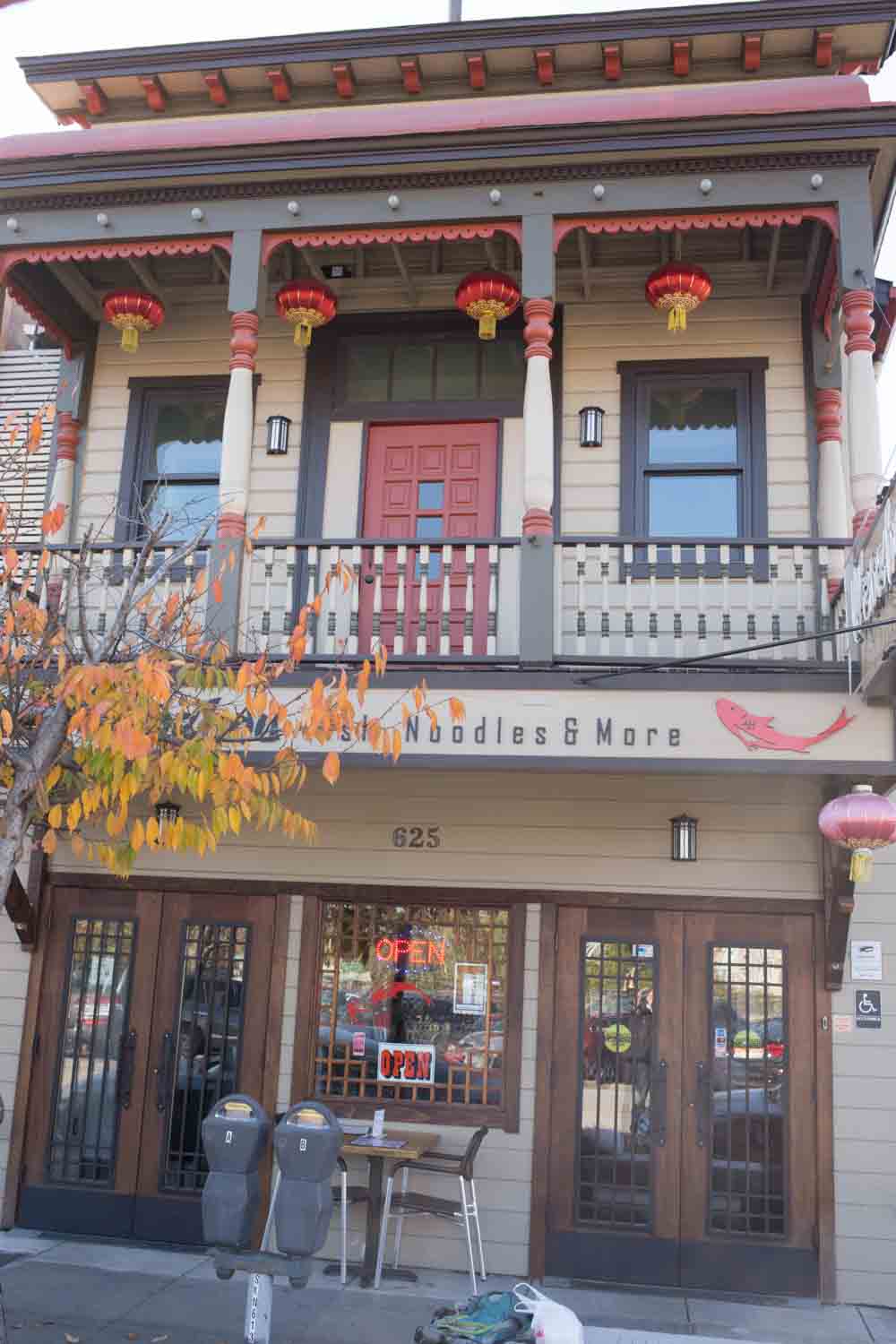 Not a fan of the faux-Chinese brush font used in the English logo, though that’s a minor quibble.

The old menu from the long-shuttered Ken Ying Low Restaurant, in the same building in what used to be San Jose’s Chinatown.

If I sound a little melodramatic, that’s because it sucks to visit two places on the same day that’s closing soon and does things the old-fashioned way- Wenzhou, and the 71-year old San Jose Tofu Company nearby. 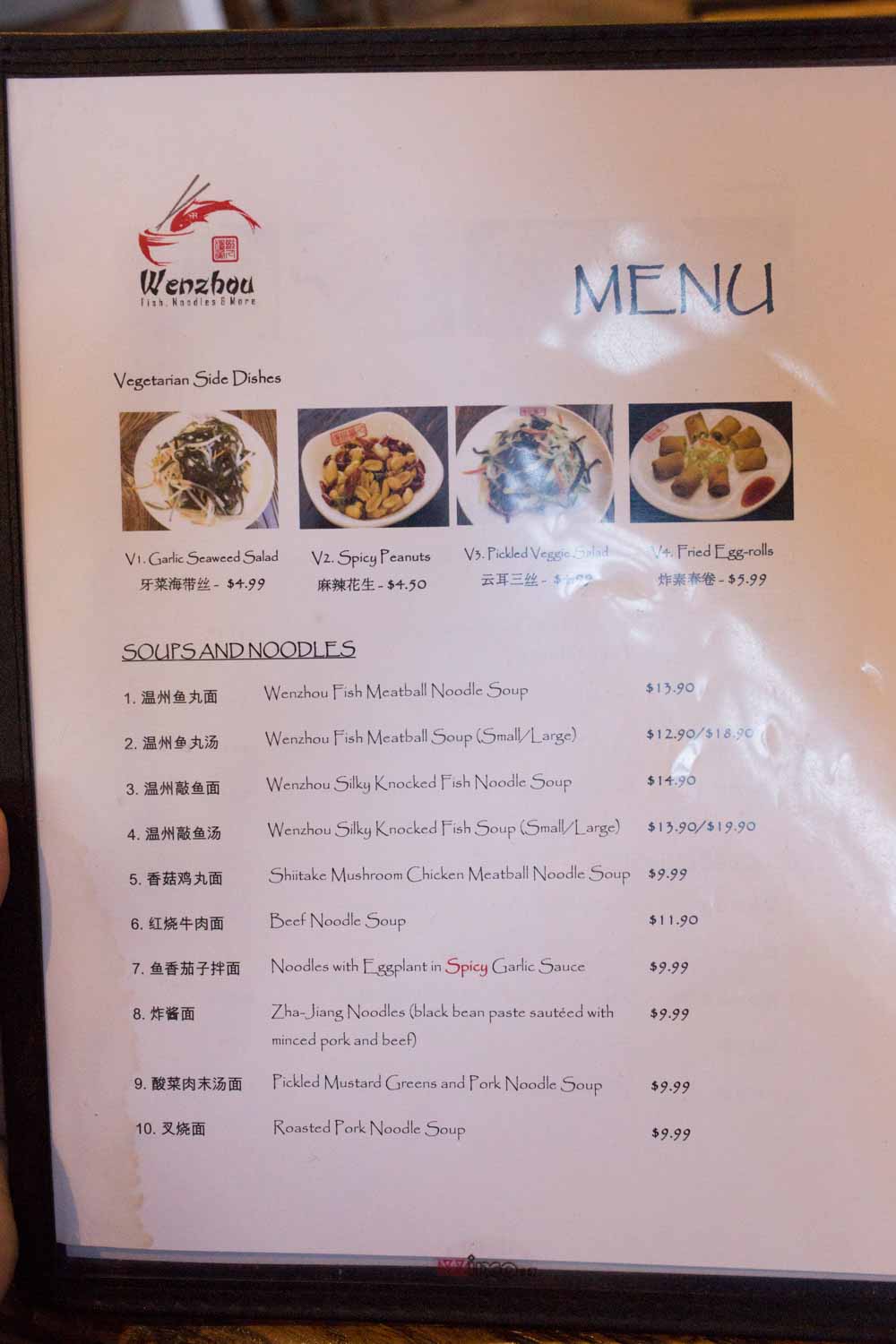 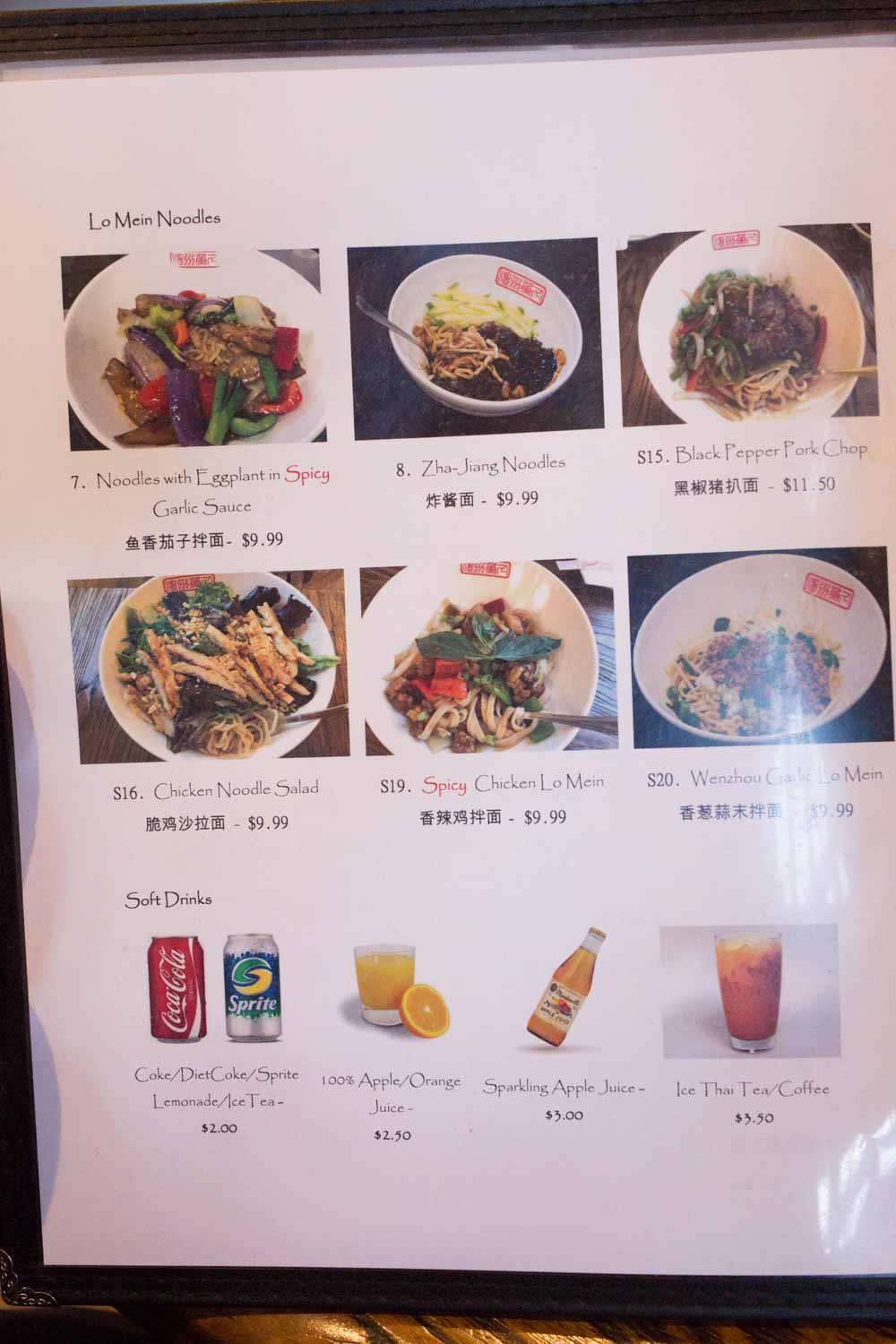 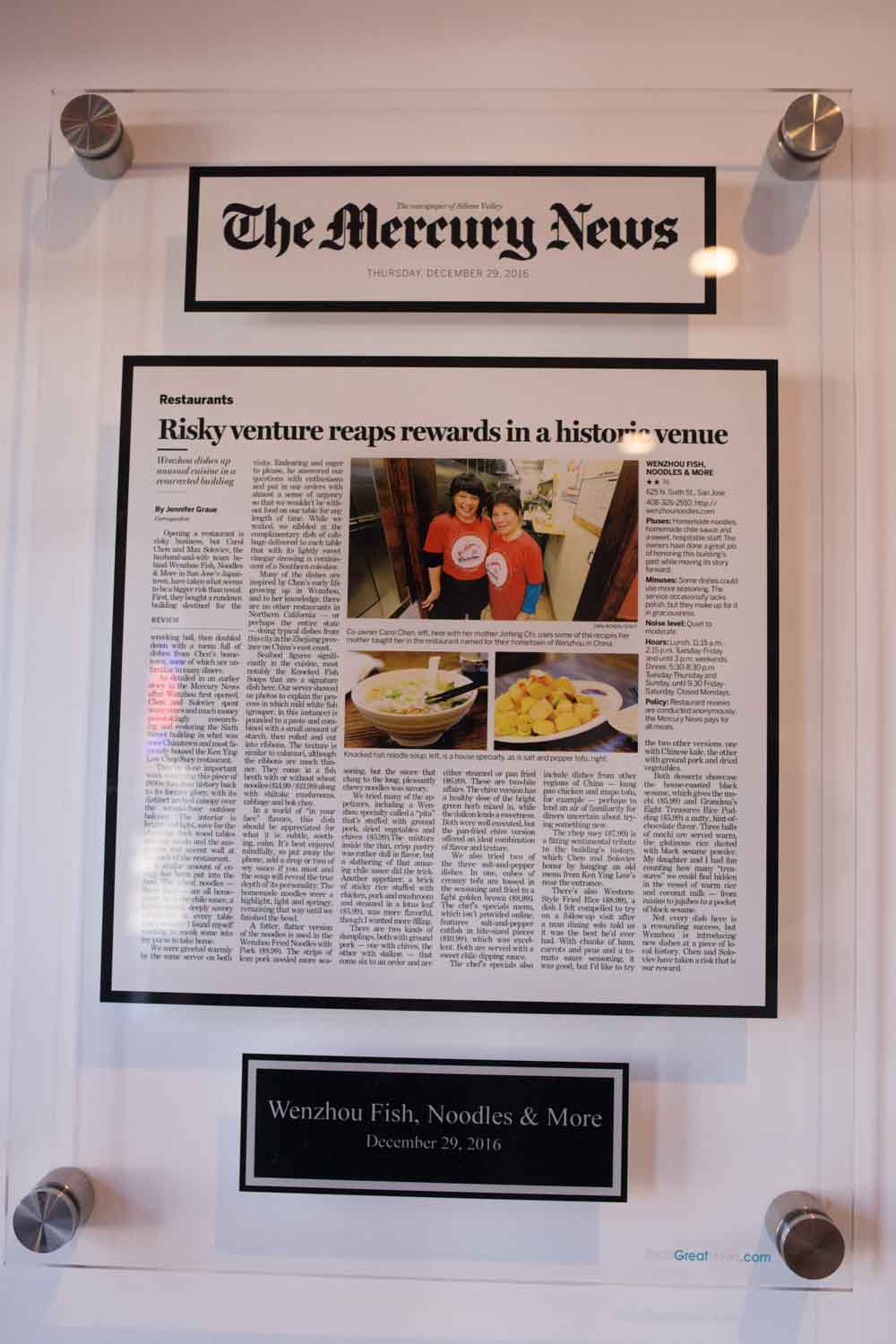 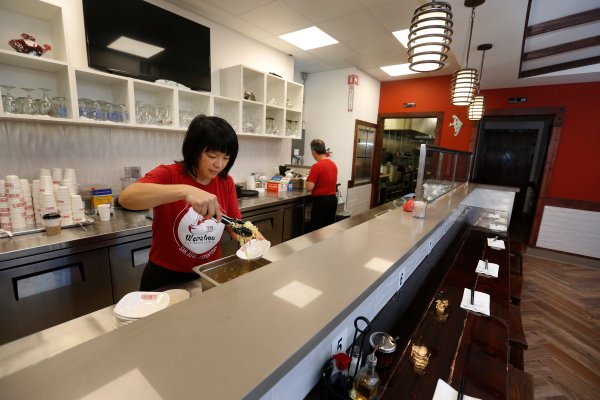 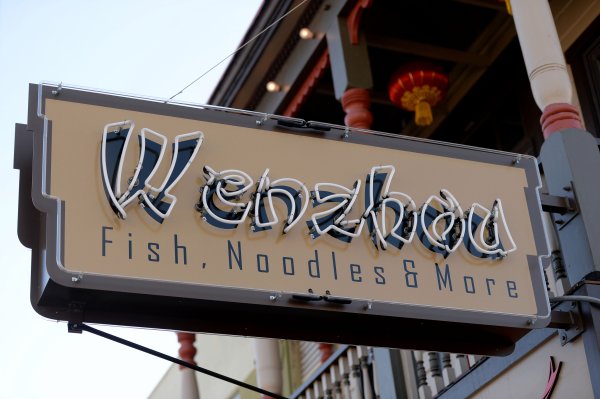 This restaurant, meticulously restored, is the only one in Northern California serving this type of Chinese cuisine.

Wow. This might get me to San Jose for about the 3rd time in the 55 years I’ve lived in San Francisco. Is it close to Caltrain?

Google Maps says 1.6 miles/32 minute walk from College Park Caltrain. I could probably do that distance in more like 25 minutes and it looks like there’s a pleasant section across a park, but it’s still a hike with a section that requires one to somehow cross the 87 freeway…

Thanks. That’s a bit of a stretch for me (I’m 76 and walk with a cane) but I may get there when my daughter visits from NY and has a rental car.

Nice review and great pictures sck. Off topic but do you have any idea what “chow yuk” would be in the old Ken Ying Low menu?

I am not really sure, Google suggests sauteed vegetable.

Interestingly, back then, chicken seemed to be the luxury ingredient- even more expensive than abalone.

Good to know, thanks. Checking Google Maps, it seems like the fastest way from SF would actually be to take BART to Warm Springs/South Fremont and then take the bus from there to SJ. Alternatively if you’re lucky and catch a Baby Bullet you could make it in about the same time by changing to the bus at Diridon. Either way, a 100 minute one-way is longer than I’m willing to travel for noodles.

nterestingly, back then, chicken seemed to be the luxury ingredient- even more expensive than abalone.

I just listened to a podcast about this very topic! It’s neat to see it reflected in an old menu. Thanks for pointing it out. I didn’t notice it at first.

I found an old thread from 2006 about chow yuk:

If you do go, make sure you grab some tofu and soy products from the very closeby San Jose Tofu before or after!

The trip to Japantown in San Jose was originally prompted by this Mercury News article that San Jose Tofu Company, a 71-year-old 3rd generation tofu shop and one of the very few places that still make tofu by hand, was closing at the end of this month. http://www.mercurynews.com/2017/12/05/san-jose-tofu-co-to-close-a-gem-a-landmark-in-japantown/ Like many food, machine-made have gradually replaced hand-made. For food, we benefit from those who provide their manual labor to give us items that…

There may be light rail station near by the Caltrain station, which should get you much closer to SJ Japantown and then the walk will be much shorter.

There is a bus stop a block away that connects to Diridon, though it’d be hard to argue for spending 2.5 hours one way in transit to eat here.

I made it to Wenzhou Fish, Noodles and more yesterday for lunch. My full reaction is below.

I talked to co-owner Carol Chen. She said they were looking for another venue. She said someone in San Francisco had asked about opening a franchised operation, and they were thinking about a possible central kitchen to support more than one location. 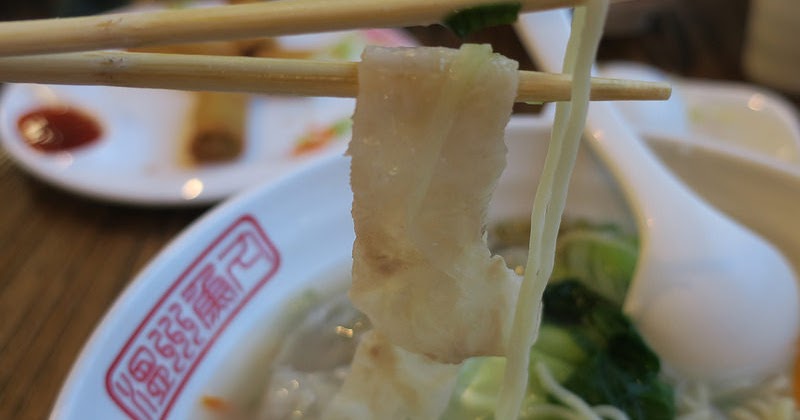 Knock Knock, who's there?  Knocked Fish Noodle Soup. As I write this, I know of only two restaurants in the U.S. serving the cuisine of...

That is serious dedication on your part to rent a car and drive an hour plus for the meal. Hats off to you. I don’t think I can do that, even though I have good personal reasons to show up earlier, and its closer to me.

Good for them, I hope they can find a different venue and make the restaurant work this time. I think the menu may benefit from actually a few more Wenzhou items, together with some descriptions and stories about those items to educate the diners.

Hi, can some confirm WENZHOU FISH in SAN JOSE has closed?

YELP has a warning up: 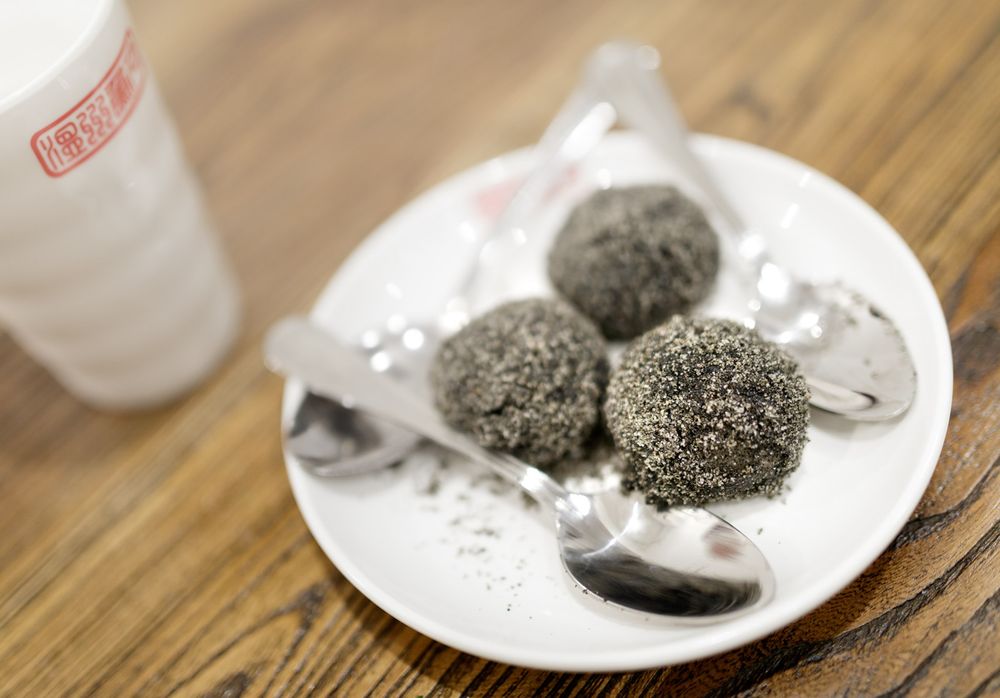 Specialties: Our restaurant is located in the remodeled historical landmark building in SJ Japantown. We are specializing our cuisine around few authentic Chinese dishes, such as fish-ball soup, silky knocked fish soup, noodles, dumplings,…

Does YELP make mistakes on “binary” things like this?

I am in the SOUTH BAY this week for a conference and was quite keen to try out the KNOCK FISH thing … I guess I will try to confirm by phone. 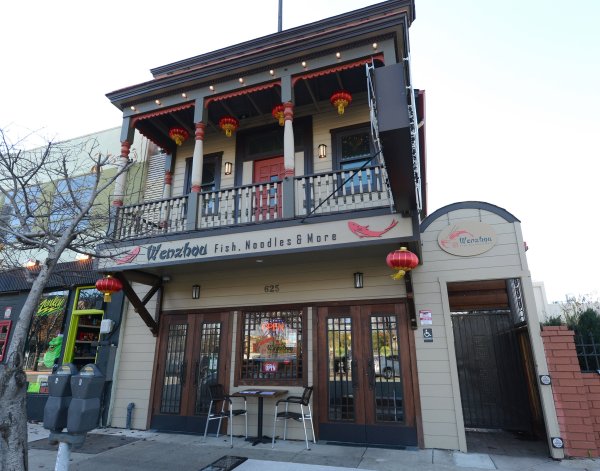 Around Town: Wenzhou noodle restaurant closes; what’s next for historic...

Wenzhou Fish, Noodles & More closed at the end of the year, and the historic building’s owners are looking for a new restaurant tenant.

Chickens were VERY expensive pre-Frank Perdue days. No joke that “a chicken in every pot” was one of the slogans in Herbert Hoover’s presidential campaign, and remained embedded in the public’s mind for decades afterwards.

When I was growing up in Chicago in the 1950’s, beef was cheaper by far than chicken. The annual arrival of “spring chickens” was a genuine event - markets would take out big ads exclaiming “Spring chickens are here!” They were the only reliable tender chickens you could buy, short of finding a kosher butcher to sell you a capon.

My mother grew up on a dairy farm in upstate New York that kept chickens as well. She also had an uncle who had a large chicken farm. In those days the primary, perhaps even the sole reason for them raising chickens was for egg production, with a few roosters around for stud service. The chickens that were too old to perform ended up in the stew pot. Growing up in the 40s and 50s, the only chicken dishes I knew were chicken and dumplings, and chicken and biscuits.

But how did we end up on chickens?