China LIve deserves its own thread, due to its ambitiousness, if nothing else, so here is one.

Eater has presented an extensive, profusely illustrated overview so you can check it out yourself, but here is their list of the promised street foods if you don’t want to wade through it:

The article doesn’t reveal very many food-related items that will be found in the market, but I’m guessing “Whiskey barrel-aged fish sauce” refers to a joint venture of Red Boat Fish Sauce and BLiS Gourmet, an ersatz gourmet creation someone once gifted me a bottle of. (BLiS also does bourbon barrel -aged soy sauce, XO sauce, maple syru[, vinegar, etc in small, expensive portions.)

I think China Live will need a big white zone fir tour buses to pull up into to succeed as the “Chinese Eataly.” I’m eager to vet the impressive list of small eats, though.

What would be really good is if their retail space offers genuine quality food stuff, that’s above the quality of all-purpose Asian grocery stores around the Bay Area. It’d be good to have easier access to good quality essentials like soy sauce, vinegar, etc that hopefully won’t break the bank.

I have a hard time figuring out how much of those descriptions are marketing speak and how much reflect quality. for example, I am not sure whether Taiwan high mountain oolong or Westlake dragon well automatically means quality tea, if quality is what’s inferred by these location descriptions. So we’ll have to see.

Where did Robin Lin cook in Taiwan? Can George Chen and him really pull off the true high end at Eight Tables on the level of Benu when it eventually opens?

Here’s a 10-year old article in English on Robin Lin’s cooking. It sounds pretty impressive, and he apparently specializes in Hakka cuisine. It also renders his name in Chinese characters, so you Chinese readers can Google away.

Thanks for the investigation. Of the few places he worked at, it seems like Chinese Cuisine 雍翠庭 looks the most high end. 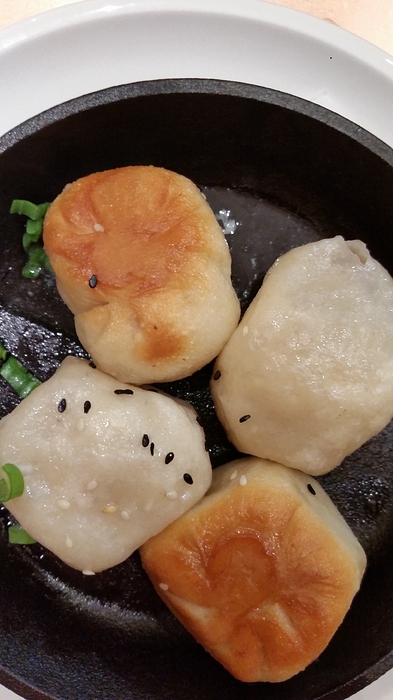 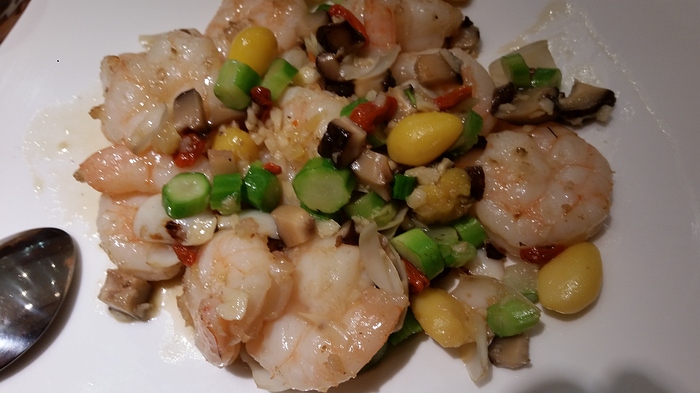 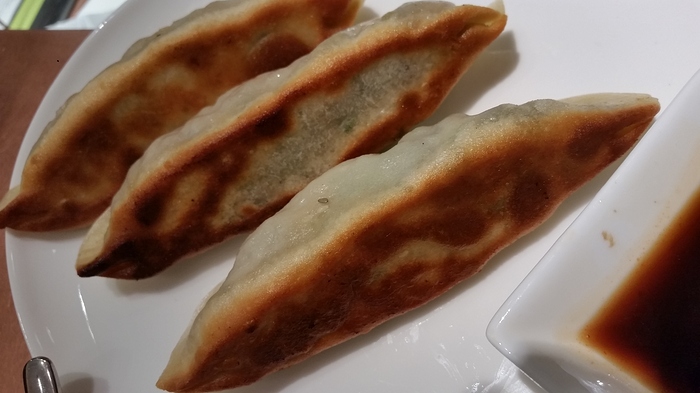 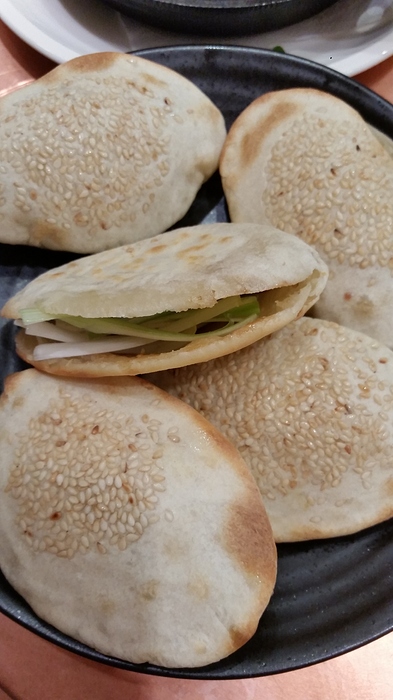 Since China Live is in my 'hood, I went by for the grand opening, and couldn’t resist checking out the food, particularly the Taipei Braised Beef Noodle Soup. All the food stations were in operation, but there was table service only (i.e. they weren’t serving at the counters and stools around each station). For dinner you’ll want to select from multiple stations anyway.

I ordered the shengjian bao, the Taipei Braised Beef Noodle Soup, and house “China Live” beer from Marin Brewing Company. I also had a surprise bonus at the end. I’ll be blogging about the experience, but here it is in a nutshell.

Sheng jian bao – about average for the Bay Area, but far from Shanghai standards. Nicely browned on one side and decent texture to the wrapper, but lacking in flavor and the requisite GREASE. Quite expensive at $9 for four pieces.

Taipei Beef Soup – I liked this, with a couple of reservations. There was too little broth for the noodles (NOT too many noodles for the broth). I also didn’t like the way the beef was uniformly sliced, like slices of chashu on top of ramen. This gave the dish a “machine made” aura. Fatter, irregular chunks would have been better,. A near bargain at $12, compared to what I’ve had to pay at ramen joints lately.

China Live Beer – like an amber ale, more tart than hoppy, probably designed to pair with Chinese food. It was refreshing for a non-IPA fan like me. $7 for a 10 oz. glass…

Near the end of the meal, George Chen came over and introduced himself. I told him I had eaten at his Shanghai 1930, as well as Longlife Noodle Co. multiple times. He said “I remember you! You were there almost every day” (LIAR). I told him what I found wrong with the noodle soup and he promised to look into it.

As about to leave, I was brought an order of three muffin-looking things, courtesy of George Chen. Thinking they were a dessert, I had them boxed to take home (I don’t generally eat sweets). When I got home I decided to taste one, and it turned out the be a mini baked char siu bao! They’re on the menu as “Roast Pork Char Siu Baked Bun (3)” at $8. Far from conventional baked CSB, but very tasty, even cold.

I won’t comment on the Market portion, because it seems to be still in progress, stocking-wise. You can find some interesting condiments there now, though.

I brought home a menu and will scan it for Flickr. 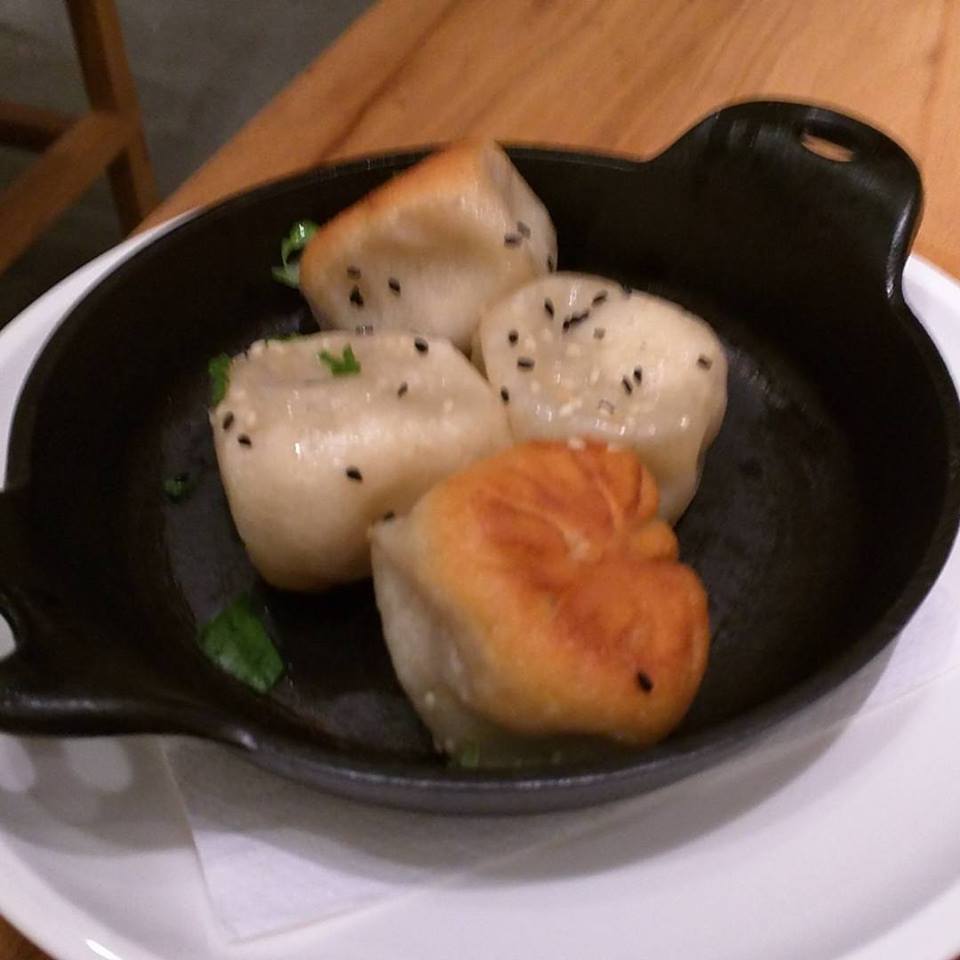 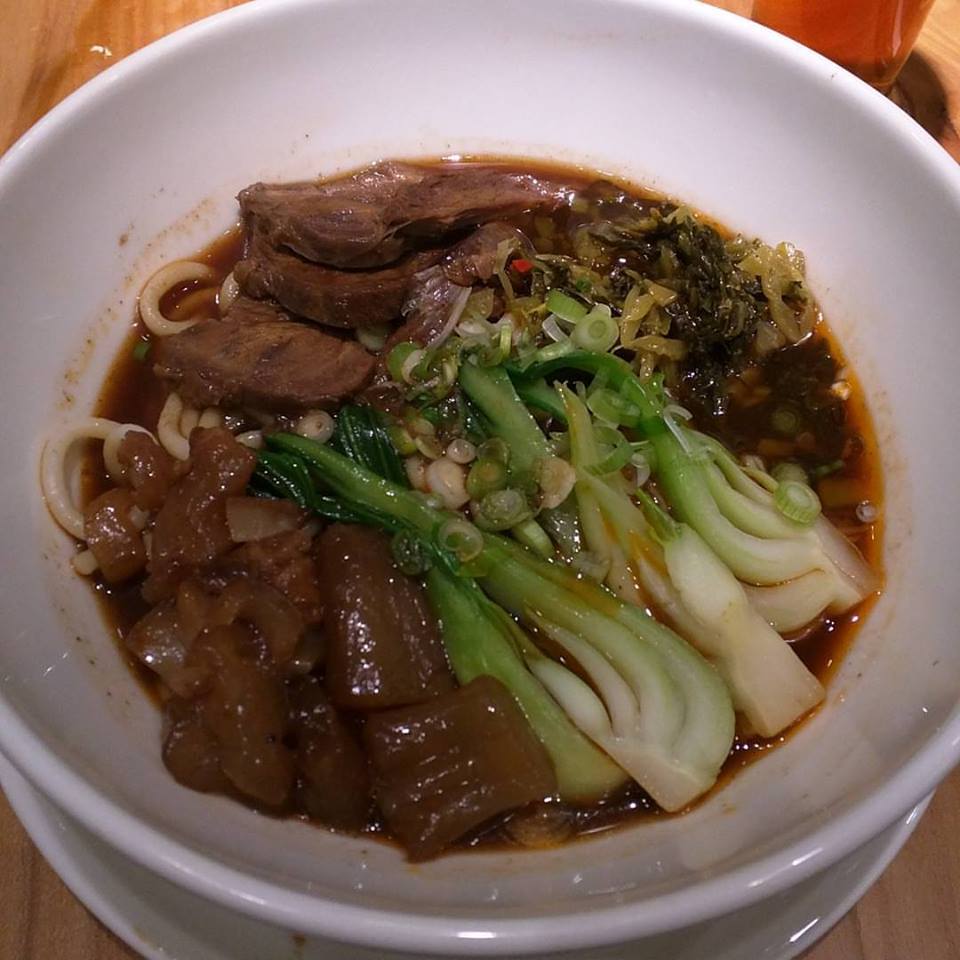 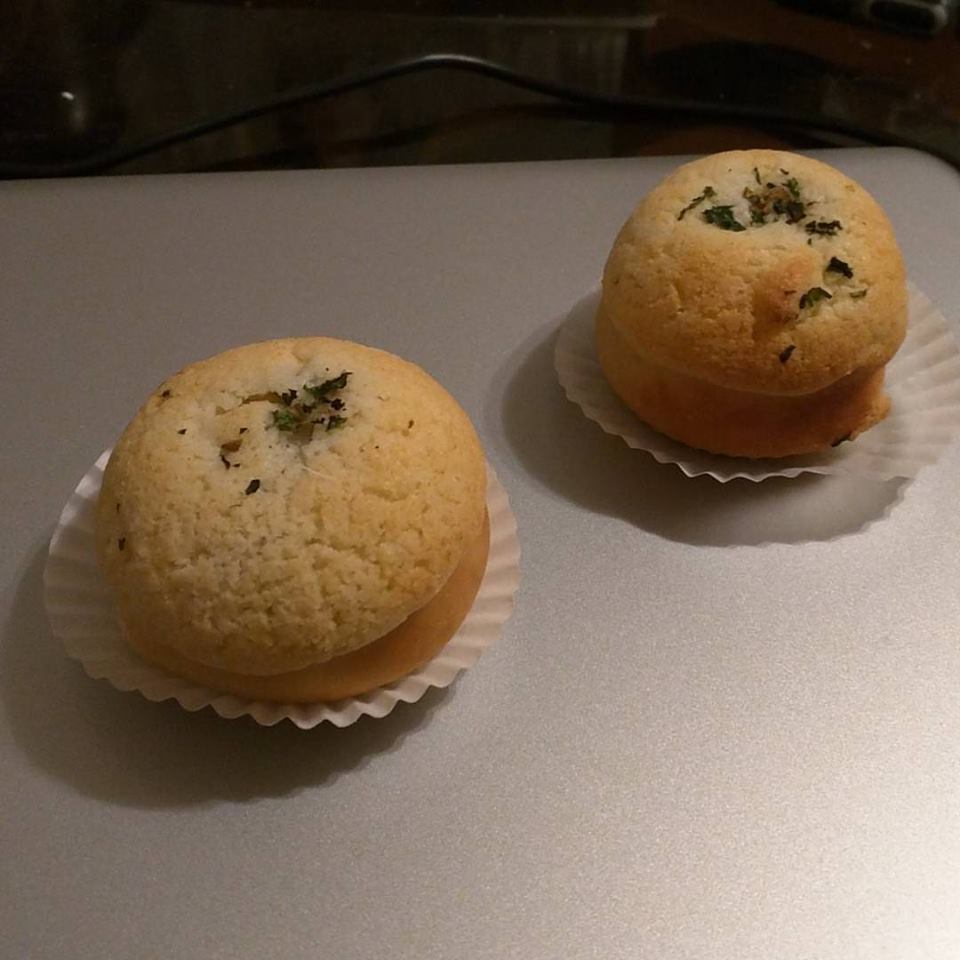 Where were you? The TV crew was from KPIX.

Was there soup in the SJB?

What are those green stuff on top of the char siu bao?

Yes, but on the bland side. And not very fatty.

Not sure. Something herbal tasting.

i was on the other side of the room. of the dishes i tried, i actually like the crystal shrimp ($22) the best, large shrimp perfectly stir fried to just barely cooked. I would have liked the sheng jian bao to be fluffier, if possible. I saw some later batches of sjb go out slightly burned on the bottom, hopefully a fluke. the vegetarian long potstickers (3 for $9) were very tasty and the peking duck in sesame pockets (5 for $16) was juicy.

I sat at the sjb/xlb counter around 7 and ordered SJB, fish in leaves, chicken of the sea wings, and the yuba/mushroom cold dish. Will focus on SJB as that’s what I really came for.

The SJB were disapointing but leave room for improvement: thin enough skin on top, UT way way too dough fluffy on the bottom and barely crispy/crunchy enough. Filing was a tiny morsel with a very small amount of meat jus / melted aspic.

From my perch at the counter, I witnessed very lackadaisical execution - typically in Shanghai, the cook would be enthusiastically spinning the pan around, making multiple full rotations. At China Live, each attempt would rotate the pan by a few degree at best. Additionally, instead of using oil throughout the cook to ensure crispness, they were using water - not sure if they’re shooting for some kind of healthy incarnation but I’m betting that’s what led to the very doughy/puffy bottoms instead of the typical and preferred crunchy almost burnt bottom.

There’s hope for these SJB but Shanghai Bistro in Newark still holds the crown for execution and value (albeit their skin thickness is just thick enough to be noticeably off, as if they jjst gave up 5ft of the finish line). 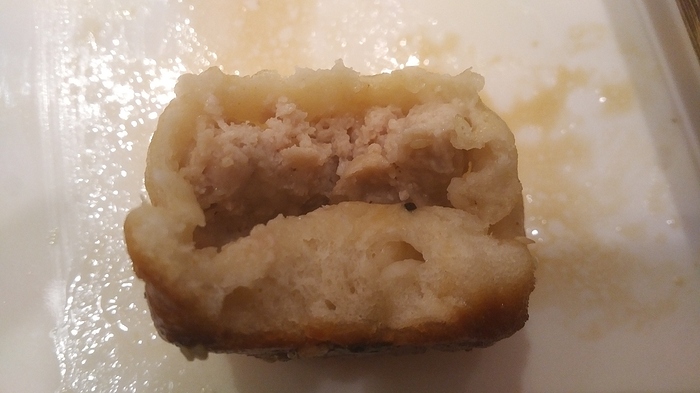 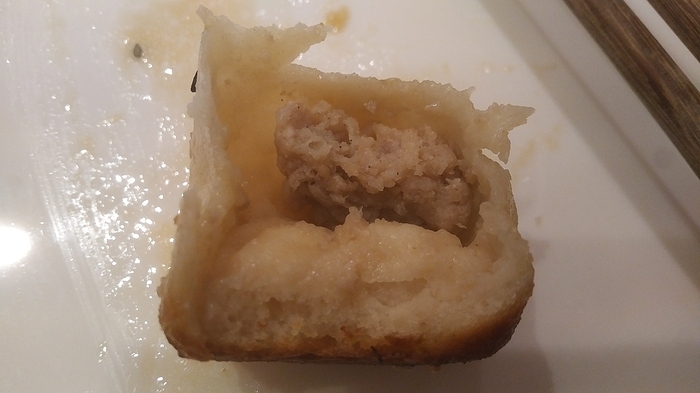 They weren’t seating people at the counters when I arrived (right after the 5:00 opening). Maybe that changed after all the tables filled up. It was quite the scrum by 6:30 when I left.

I think the main problem with sjb in the US is our health consciousness; there should be less collagen and more fat in the “soup” IMHO. Here’s what happens when you put some of Shanghai’s finest (Shu Cai Ji on Yunnan Lu) in a brown paper bag: 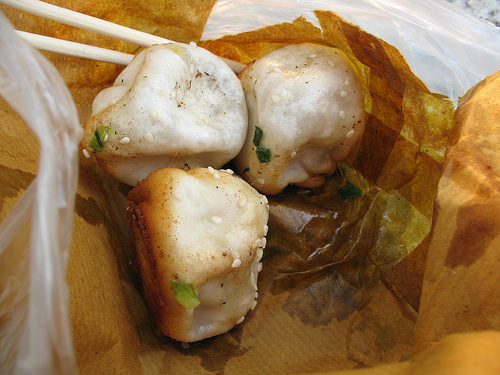 SJB with “slightly burnt” bottoms is a good sign, if you ask me

My getting seated at the counter was a bit of an ordeal. I got to China Live at about 6:40pm and asked if I could order take out, to which the answer was a no. Then a middle aged female who seemed to be more managerial intervened and suggested that I could be seated at the counter as there were 5-6 open seats but then walked away to handle a pair of VIPs.

From there, the two front of house staff were confused about what to do because it seems there was a policy in place to not seat at the counter. Another customer waiting for seats asked the same question which increased the confusion and we were both told to wait for the female manager to come back.

All in all, the GM handled it well once he was involved but it seemed that more training and planning time could have better prepared the FoH staff to handle the situation.

It looked a little too black for me

I cross-posted my blog article as a Yelp review and received a response from Doug Collister, Diector of Marketing and IT at China Live via Yelp Mail:

Thanks for taking time to right in such great detail your experience…we are still fine-tuning our recipes and we agree more broth is needed for soup and have made that adjustment. We are still also working on all of our seasoning, including the SJB.

Hope you join us again soon to check out the above mentioned changes.

Does that mean they read Yelp review, but not your blog nor Hungry Onion for that matter?

Someone on Yelp identified the mystery buns as “BBQ pork pineapple buns” in a photo and I guess that’s a fair description, given that the ambiguous menu designation is"Roast Pork Char Siu Baked Buns" with no reference to “bao.”

I’m clueless when it comes to pastries, Chinese or otherwise.