Understood. My husband doesn’t drink either. Where we are, there seems to be a growing number of non alcohol choices.

For me, Best Gazpacho ever is Alton Browns’s recipe.
Dash of tabasco and worchestershire. Little bit of lemon and lime juice. 1.5oz good vodka. Add some ice and top off with Motts Clamato. Garnish with a celery stick, olives…maybe bacon. Good old Caesar is all the gazpacho I need.

Latest batch; step one. All the veg, the salt and a pinch of sugar and maybe a splash of day 2 tomato shrub. I’ve noticed the recipes don’t usually include basil, but I have a lot, and I did. 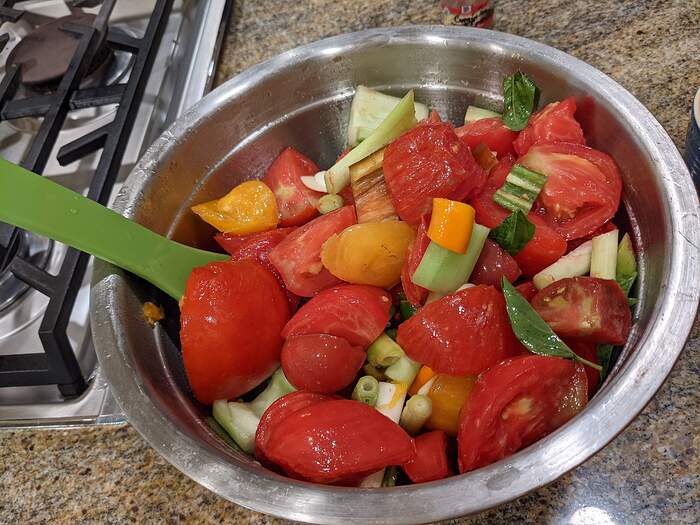 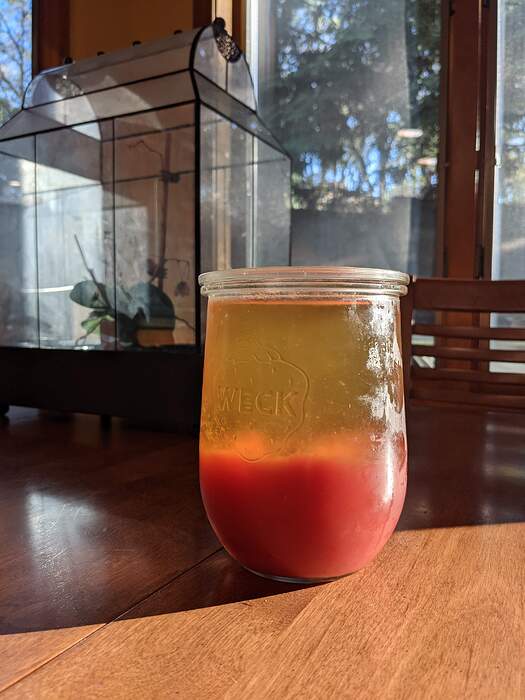 I’ll be pureeing and straining tommorow

Ta dah! I tried a medium and a fine seive, and think I prefer the fine, which from 3 pounds 11 ounces of whole tomatoes removed about 3/4 cup solids vs 1/4 cup. 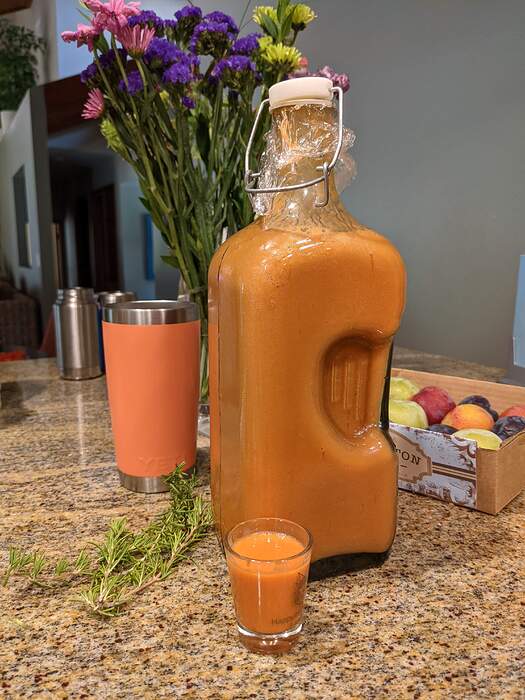 I have so many tomatoes I'm going to make gazpacho tomorrow! Cooking, Cookbooks, Ingredients

Love gazpacho. Hate peppers, or rather they hate me. I make mine with tomatoes, cucumber, celery, basil, tomato juice and oil, a little vinegar, and salt to taste. It’s quite nice with some chilies or pepper flakes too. I like it chunky so don’t blend the whole lot, and I prefer it without any bread. What about you?

You sure are eating/drinking healthy foods! There are a lot of vitamins and beneficial compounds in gazpacho. When I was titrating vitamin C from both oranges and peppers, it was surprising to discover more vitamin C in peppers, by volume, than oranges. That was in advanced high school biology. I thought I messed up and called the teacher over. He confirmed the results were correct.

So, now that you’ve made multiple versions, do you have a preferred “recipe”?

My preferred recipe is that first one from the NYT, although I switch up the peppers, and strain everything before I add the olive oil and emulsify. I especially like that there’s no bread!

Thanks! Bread is better someplace else than gazpacho, like a BLT!

Argh indeed! It’s mostly the proportions that I think are important . Here they are

Cut it up, put all but oil and vinegar in a bowl, and when you feel like it, blend on high for 2 minutes, strain, then blend again with vinegar, then streaming in oil until creamy and pink…maybe. More vinegar, s&p to taste.

Has anyone had experience freezing gazpacho? Or is it a waste of a good thing? Husband made a vat of it this afternoon, more than we can consume before it goes “fizzy”. Or should I share it with our neighbor, who doesn’t like raw tomatoes but has houseguests who might enjoy it.

I think somewhere in this thread or elsewhere on HO is a post about freezing, and needing to shake it up after thawing. I have not tried it. I was just about to try it but my harvest has slowed down considerably with our heat. It’s been much cooler for the last three days, so maybe there will be more.

Thank you! There’s about 100 lbs of tomatoes, in crates, in the kitchen, after processing 3 gallons of puree! Multiple bags of cucumbers are in the fridge and Sugar Rush Peach peppers can stand in for the Anaheim/Cubanelle. Lots of ingredients on hand and a Vitamix to help out.

Oh my, a lot of work, but I’m envious. Some of the best memories I have of my departed parental in-laws, are days that we prepped for canning, under the big pine tree in the back yard, and of the actual process. Such fun, and not drudgery when multiple people pitch in to get the job done. Still - I’d take the harvest, even solo…

That’s verbatim from Andres’ recipe. I can’t comment on whether he made an error because I don’t use that brand. However, the oloroso sherries I’ve had have been darker but dry, not syrupy sweet - more savory. 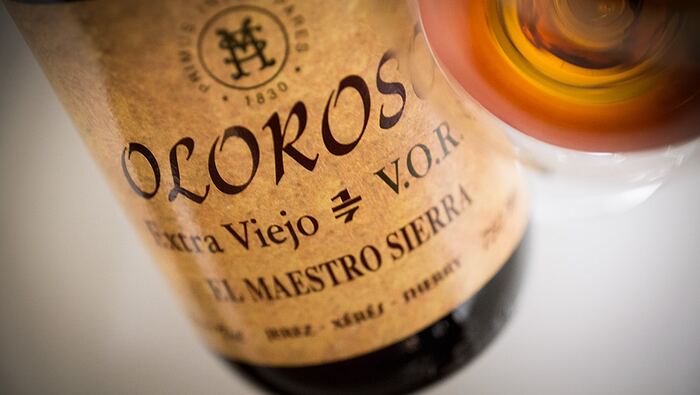 Oloroso is aged in the absence of flor, in an oxidative way and starts from a selection of heavier, more full-structured musts than a Fino or Manzanilla (sometimes a second pressing of grapes). After fermentation the young wines are evaluated...

I cannot imagine in a Gazpacho which is totally savoury.

I don’t think that’s necessarily correct, see my link directly above. Some olorosos, and indeed all I’ve tasted, are quite dry.

Also, could you please pause and reconsider before writing “IN ALL CAPS”? It’s interpreted as shouting and bad form, especially when you are “correcting” someone or arguing a point.