Thought I’d start a thread on Greek food, how we enjoy it in Greece or more to the point, how we cook it at home or enjoy it at Greek Tavernas or Festivals. My partner is 100% Greek and over the years I’ve learned a lot as well as had fun cooking with others for large gatherings. The partner actually does the most cooking these days. His food is delicious & the range of pastries not too shabby. Please keep in mind that while knowledgeable I am not an expert and want to keep the history and politics out of the topic. Just want it to be casual. OPA!

My family is also Greek; I’m second generation. Mom was an excellent cook, and we had Greek dishes maybe three or four times a week at home. I remember midweek dishes like youvetsi (fork-tender braised lamb with orzo in tomato sauce, yorvatlakia (meatballs with rice simmered in chicken broth with avgolemono), simple grilled fish on Fridays, leg of lamb and pilafi (oven-baked rice) on Sundays, souvlakia on the outdoor grill in summertime. Yiayia was a master baker. For one day at Christmas and Easter, she somehow was able to bake several kinds of cookies and breads, keeping all of the batches separate and measuring ingredients with her hands and coffee cups. She also made incredibly good pastistio and spanokopita.

It’s disappointing to me that, here in the Bay Area, there aren’t that many Greek restaurants. I occasionally cook up some of those dishes. I’ve yet to duplicate the creamy avgolemono, though.

“drininking” - you got that right LOL

Ernie, try adding an extra egg yolk or 2 to the avgolemeno - think it’s the moisture in the egg whites that reduce the creamy factor. I’m not crazy about eggs & wont eat certain avgolemeno soup or sauces if the consistency isn’t right (to my tastes anyway). Oh those Greek yiayias, how they worked so hard to feed their families and relatives. I didn’t meet the yiayias from either side of the family - they passed much too soon.

Lidl has “Greek theme” every couple of months or so and I always get the olive oil and kalamata olives.

That’s nice! I’ve gotten some great Kalamata olive oil from Trader Joe’s and can get a large jar of Kalamata olives from Costco.
One of the family yiayias was from the village of Vasalitsi about 30 minutes from the city of Kalamata. It was interesting to visit that area & the locals were still talking about the big earthquake that hit the area a few years before our visit. We shared a meal with very distant relatives, were hugged, kissed and the feast they put out for us was hard to believe. Beautiful area & wonderful memories.

Nooooo! Can’t do it, detest the flavor but did have some homemade rose retsina that was on the slightly enjoyable side of being drinkable. Love Ouzo for cooking and can handle the 7 star Metaxa. When my sis in law passed from cancer way too soon, the church people put out a wonderful lunch. Leaving the chapel & going into the reception area, there were small glasses of Metaxa for everyone, which is a tradition. I like religions like that!

My relatives of a certain persuasion would have been shocked out of their underwear! (No offense intended for anyone).

Lambchop and I mentioned Meteora in the honey thread… I was looking through some photos taken on that trip. It’s not a kind of place many people who have visited Greece can say they have been to simply because it’s a bit out of the way. Most people go to the capital and the islands, far away from Meteora. But if you are coming from Albania, like I did, then it’s a no-brainer.

Soon after crossing the border into Greece the driver stopped at a roadside cafe for toilet break. Locals set up stalls along the road in front of the cafe selling honeys, preserves and fruits etc from their gardens. For the same price I get standard honey here at home, there it’s some of the world’s best! 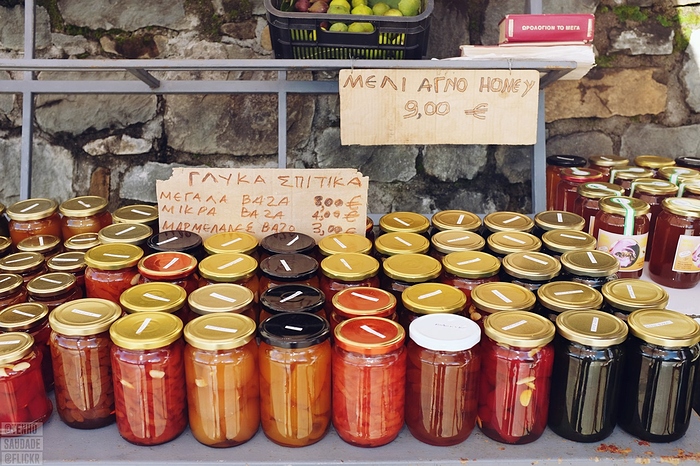 I did it twice. Took the bus to the end and walked all the way down, each time in a different direction. Most tourists come by tour coaches, get dropped off at different monasteries. I’m glad I did it my way, though. Walking leisurely taking my time making photos and enjoyin the spectacular views at all elevations. Wild thyme everywhere.

Meteora means something like “suspended in the air”, lofty, elevated etc. 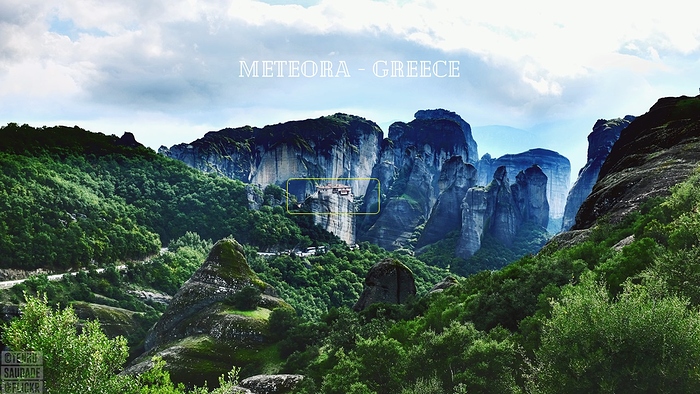 The same monastery in the previous photo. It’s actually built on a lower rock than other monasteries. Bus and cars for scale. 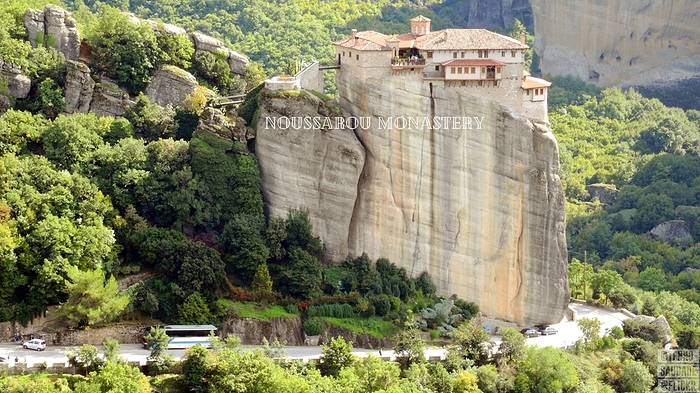 The ticket. I visited this monastery the day before. 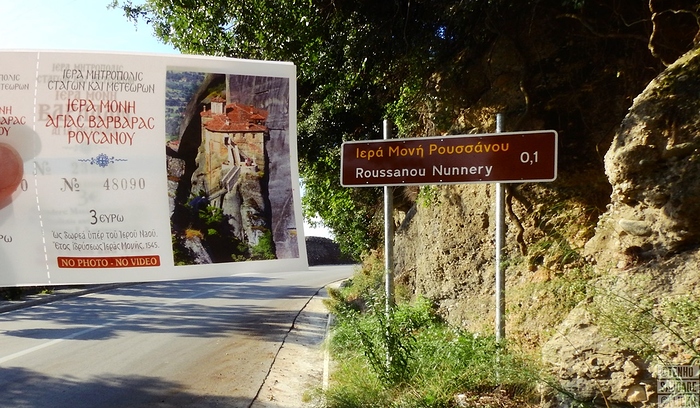 Thanks for posting those photos; you always take the best pictures of the interesting places you visit in your travels & the foods of the various countries. I have really enjoyed them.

Making a Scotch broth inspired hearty soup with a Greek spin today. Going to use Greek spices, onions, celery, carrots, garlic, potatoes and barley. Some type of homemade bread, rolls or scones (savory). Will be perfect for weather since its been snowing all day. Will post how it turns out. Oops, forgot to say I browned a bunch of lamb bones & cut up some weird type of roast. We get a lamb each fall from a hobby farmer we know. Whoever does the butchering & packaging is a rookie. It’s always a surprise opening the packages. Loin chops turn out to be strange shoulder chops, etc. we enjoy the lamb a lot, so not complaining too hard here.

Soup turned out great - wonderful lamb flavor & pleny of meat too. A little tedious cutting it off the bones but so worth it for a good result. Got into a time crunch so made a piece of sourdough garlic toast for each of us. Wish I’d had time for the homemade bread or rolls however.

Lidl has “Greek theme” every couple of months or so and I always get the olive oil and kalamata olives.

Me to. They had little tins of marinated octopus last time.

I’m much more familiar with Greek Cypriot, rather than Greek, cuisine. I presume there are similarities but I’m equally sure that there’s influence on the island’s food from the Turkish Cypriot community and, also, it’s location close to Lebanon. I’m thinking of Cypriot staples such as pourgouri and halloumi (soon to have EU geographical protection)

Spanikopita for dinner last night. What a great combination of flavors & it makes a light lunch or dinner. Goes well with soups too. This was leftover from a few days ago - so bonus.

Thanks! I enjoy taking photos and all my travels are planned around food/drink/animals/hiking/nature.

May I suggest something…? If possible, could you give us rough instructions for the food you make, together with its name is Greek? Most of us here are intuitive home cooks and maybe someone might want to have a go at making the dish with some instructions.

I’m not familiar with Cypriot cuisine. I presume there are influences from Greek and cuisines in the nearest countries. Not only geographically but also historically.

I keep putting off visiting Cyprus. A quick image search of Cypriot foods I notice some familiar dishes. All look good! Halloumi is common these days, even here in my food hell.

Yes I certainly can and will do that! Hoping to upload some pictures soon also. Need to talk to my two millennials about that. I’m not a great food photographer but hope to get better. But the recipes will soon show up, think I’ll start with the Creten cheese pastries.

I keep putting off visiting Cyprus

Interesting island, both historically and socially. My partner lived there for a while as a child (at the time of the Greek terrorists - who tried to attack her school bus)

We had cheater gyros last night. Actually we have them fairly often. Since we don’t like the pressed lamb meat found in most gyros, we’ll take 1 pound of ground lamb, season well with Greek or middle eastern spices (usually use Penzey’s Turkish blend which is perfect but we were out.) Anyway, s&p, greek oregano & garlic w/lamb seasoning. Form into oblong patties w/o over handling the meat. We make a quick tsatziki sauce using either plain yogurt or sour cream for the base. Made a Greek salad too. The patties are then grilled and we use a home style soft wheat tortilla for the wrapper, which is warmed up by the grill briefly. I put some salad in my gyro & have some on the side as well. Very quick and delicious. I’m going to try making my own flatbread soon.