LEMON LOVE AND OLIVE OIL - March 2022 Cookbook of the Month

@pistachiopeas , Serano on Pape , Cosmos’ Agora in Scarborough, Mak Deli, they all sell Greek Nescafé which froths better because it’s freeze-sprayed (or something like that). It will froth with a whisk. There’s also a little battery-operated frother some ppl use.

They have decaf, as well. I save the packets of instant (all brands, in case anyone is boycotting Nescafé) from Japanese, European and British hotels because they’re better than North American instant for frappé. ( I haven’t travelled internationally in 2 years , so I’ve used up all my collected instant coffee packets and tea bags) I am not sure if the Davidoff instant sold at Italian shops froths well.

I drink frappé from March to October. 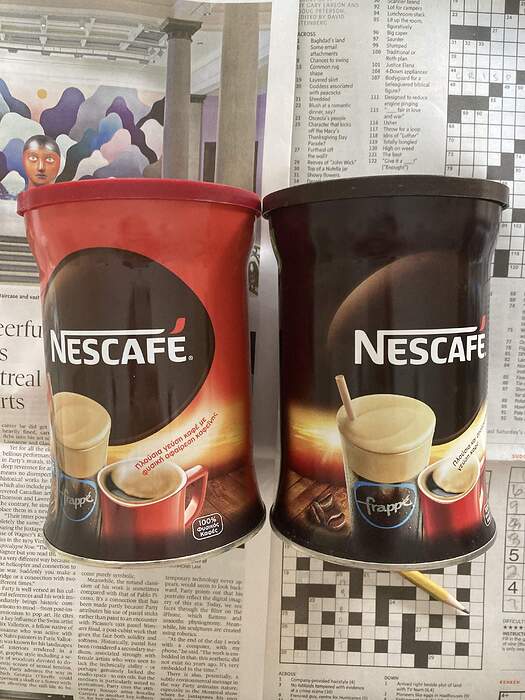 Good to know, thank you! I think I’ve seen it at Highland Farms in Scarborough too. I can see more of these in my life in summer months.

They cost around $6 these days and often the cafés use imported Greek bottled water, giving you the remainder of the bottle to take with you . It’s customary to serve the Frappé with a glass of water.

The best tzatziki I’ve ever made (or eaten) is from SK (I think originally Ina Garten). That little shot of vinegar brightens it up so much. Here’s a link (the whole recipe is great): https://smittenkitchen.com/2016/05/chicken-gyro-salad/

Totally agree about the vinegar. My favourite tsatziki is from former COTM The Olive and the Caper and also calls for a dash of red wine vinegar.

I use a little white balsamic and some fresh lemon, and often only a half clove of garlic, and I add fresh dill.

I haven’t tried SK’s Tzatziki yet. Over the pandemic, I have been cooking a lot, and my 2 go-to resources for Greek recipes have become Akis Petrezikis and MyGreekDish.

These are 2 pretty amazing comprehensive threads on the topic of Greek food here on HO:

Thought I’d start a thread on Greek food, how we enjoy it in Greece or more to the point, how we cook it at home or enjoy it at Greek Tavernas or Festivals. My partner is 100% Greek and over the years I’ve learned a lot as well as had fun cooking with others for large gatherings. The partner actually does the most cooking these days. His food is delicious & the range of pastries not too shabby. Please keep in mind that while knowledgeable I am not an expert and want to keep the history and polit…

We had a close race this quarter, with GREEK eking out a win over BBQ. Lucky for me, I’ve got a garden full of oregano and tomatoes, and I’m not afraid to use them! Looking forward to exploring this marvelous cuisine with all of you HOs. 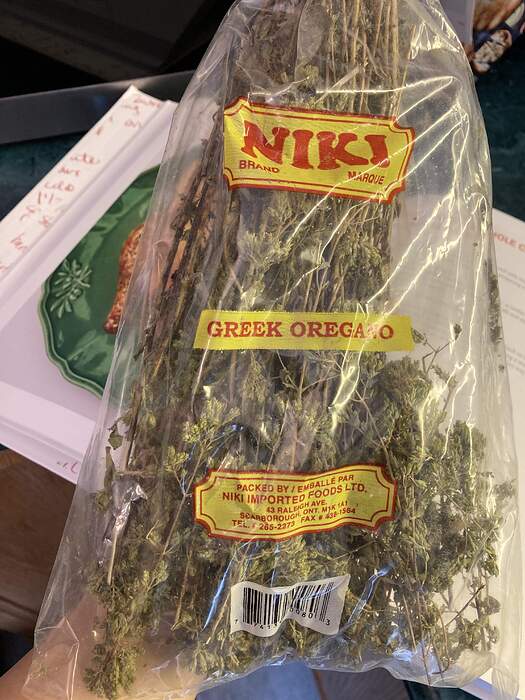 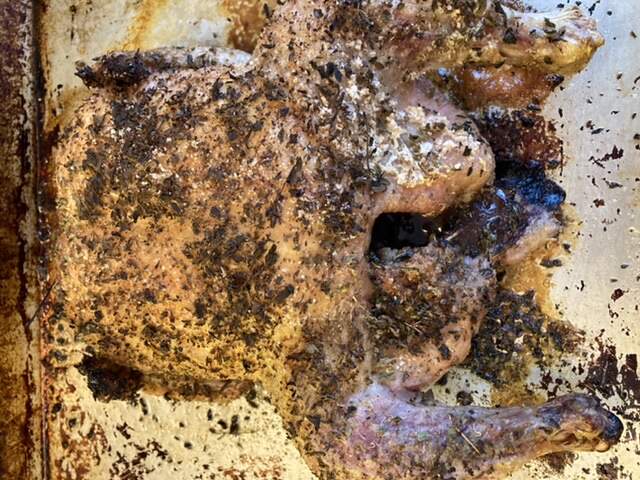 I’m leading with a picture of the Greek oregano I purchased, as the chicken photo isn’t great. What was great, was this recipe, which is simple and delicious. Preheat the oven to 450. Make sure your chicken is very well dried, place it on a baking sheet, and rub all over with kosher salt, pepper, and oregano. Roast for 1 hour. At this point, my chicken, which I roasted breast side up, was the right temperature. Let it sit for 10-15 minutes (I did 10), carve, serve with lemon wedges, and eat. I served it with some simple roasted baby potatoes, and the fennel salad from this book. Everyone loved this meal. 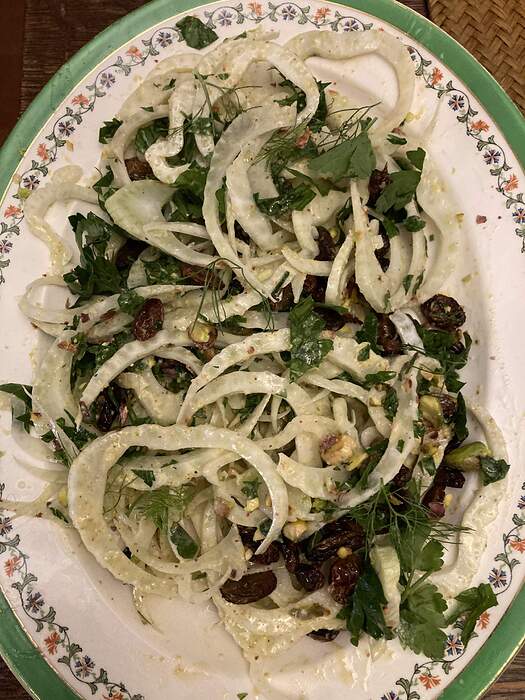 The process is described by others, so I’ll just say, wow, what a wonderful salad. I could eat this weekly. I also included some fennel fronds. I think mint would also work here, in place of the parsley. My raisins were golden but I let them go a little long and they look quite dark here. 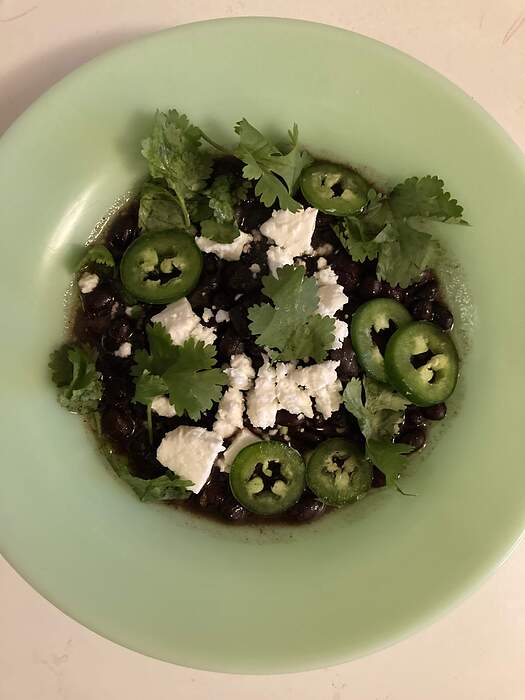 I started by soaking my beans for about 8 hours, though MS gives the option of both soaking or not soaking, but not doing so would have made this take much longer to cook. I cooked mine for about 3 hours, but if we hadn’t needed to eat dinner early with the kids, I would have kept going. You combine the beans, with finely chopped onion, bay leaves, and a large amount of ground cumin (1/4 cup). Cover with water by 3 inches, bring to a boil. Reduce heat and cook. MS says for 1.5-2.5 hours but as I said, mine were not “very soft” by then. Add water as needed to keep the beans covered by 1 inch. Remove from heat, add 2 large lunches of salt and some freshly ground pepper, along with 1/4 cup olive oil, and the juice of 2 limes. Top each serving with feta, cilantro, and thinly sliced jalapeño rounds. Loved this! I think it will taste even better as leftovers. I plan to make some breakfast or lunch tacos with it. 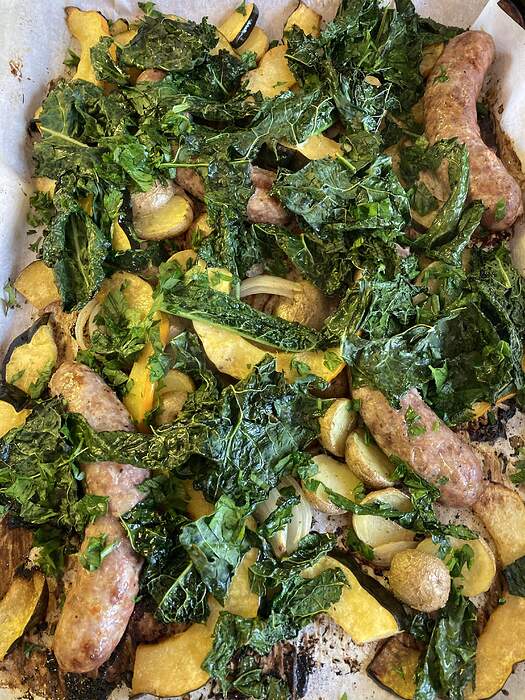 This is a pretty standard roasted sausage and vegetable recipe with a couple of differences from how I usually do it. The ingredients are Italian sausage, acorn squash, baby potatoes, red onion (I used yellow), and kale. The potatoes are halved, the squash is cut into “smiles,” the onions are quartered, and the sausages are pierced with a sharp knife. The vegetables are tossed with olive oil. The sausages are meant to be drizzled with oil but I didn’t see the need for that. Dress everything with the juice of one lemon, a generous amount of oregano, salt, and pepper. Place everything on a parchment lined sheet pan, and bake for “30-40 minutes” in a 400 oven. I would usually do this in stages, as I only cook my sausages for 20 minutes, but I decided to just try the ease of this method. At 40 minutes, you are meant to place 3 cups of torn kale on top of everything else. I tossed my kale with a bit of olive oil first. Also, I used lacinato, which was fine, but I think curly kale is better roasted.

The differences for me are the long roasting time, the lemon, and adding the kale. Normally, I would serve a salad with this (and MS suggests doing so) instead of roasting the greens, but with the kale present in the recipe, I didn’t bother. This was a hearty and delicious meal. I liked how the lemon came through in the potatoes and squash. I’ll definitely use her technique and make this recipe again.

Is it just me or is that not acorn squash in the book’s photo? I’ve never seen it that orange before.

I meant to add that you roast your kale for 10 minutes.

I’m always curious about these types of recipes. Like you, I usually cook sausages for only 20 minutes, and also I would not have though 10 minutes sufficient for kale, especially with stuff under it. Were both cooked to your liking? Or was it more that everything melded to a pleasing whole even if individual components weren’t optmized?

The sausage was great, and it was nice not to have to check the internal temperature. The kale could have used a couple more minutes, but it depends if you want it crispy or not. This was crispy edges with softer centers. I worried the potatoes and squash would just steam, but they were roasted the way I like them, crispy and soft. However, the recipe calls for 6 sausages, and I only used 4. The pan would have been very crowded with 6. It wouldn’t be a bad idea to spread this across two baking sheets.

I wouldn’t normally make a dish from a COTM twice in a month, but I really wanted to give this another try cooking covered for part of/most of the cooking time. The briam recipe reported later only increased my interest in giving this another go. So this time I covered the baking dish with foil (well-oiled on the food-facing side), and roasted for 40 minutes, then removed the foil and let it go for another 15. I was afraid the meat patties wouldn’t brown with so little uncovered time, but they did. Not as much as in the first iteration, but plenty, and they were juicier. The potatoes were softer and less dry, more as described in the headnote. There still wasn’t quite a “sauce” made in the baking dish, but it was a softer dish, and we preferred this version. 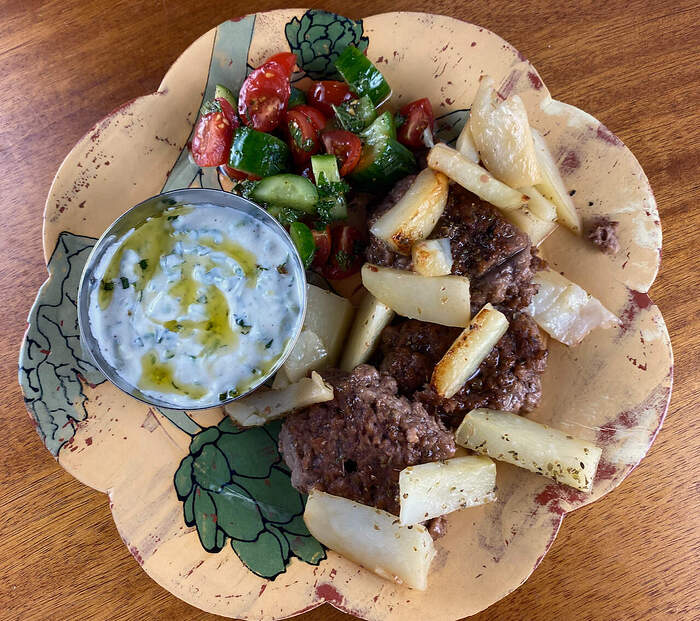 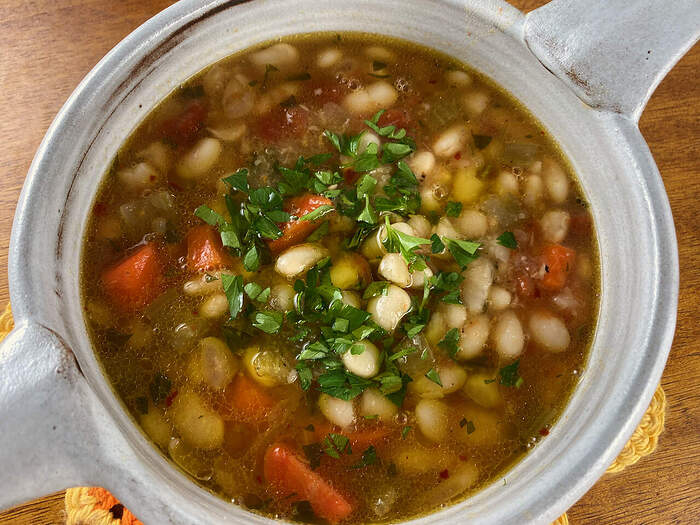 This is a very simple stew/soup, with the main ingredient being time/patience. White beans are soaked overnight (I added some salt to mine, not called for in the recipe). When ready to cook, the beans are drained and added to a pot with water to cover by 2", bay leaves, whole onions, a head of garlic, some canned tomatoes, and salt. I was making a 1/2 recipe of this, but still used the whole head of garlic. My one onion was cut in half. I used two fresh bay leaves from the yard. I did break up the tomatoes a bit before adding, as I didn’t want to have to break them up later and smush the beans in the process. This is all brought to a boil then reduced to a simmer. Celery is added, and it cooks for 30 min. Then carrots go in, and another 30 min goes on the clock. After this, you remove the onion and head of garlic, check seasonings, and the doneness of the beans. Olive oil is stirred in. The stew is garnished with parsley, red chile flakes, if desired (I did desire), and ground black pepper.

This is greater than the sum of its parts. A tasty and comforting soup. There was a part of me that wanted to add a squeeze of lemon to my bowl. I didn’t this time. Next time maybe I will. 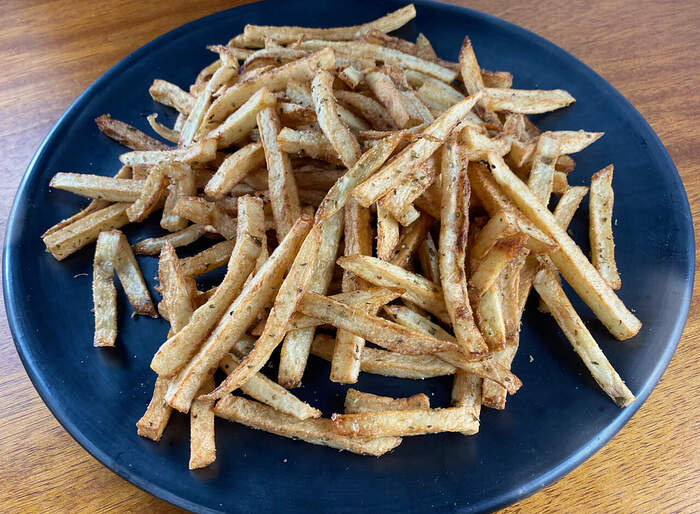 I deep-fried these, in a quart of olive oil. This was one of those recipes where I was skeptical, but the only way to find out if I was wrong about it was to try it out. I normally do fries at home with the cold start method, or sometimes with a steam-and-fry method or a double-fry method. This recipe just has you fry the potatoes once, with no pre-cook. The recipe doesn’t give a specific temperature either, just a very vague way of telling if the oil is hot. Recipes like this make me wonder if the author has actually done it this way. It might be telling that the baked variation is much more specific.

So the fries look pretty damn good in the picture. But they weren’t my best fries by any measure. Just off on texture and not as crisp as they should have been. This might be the rare case where the baked version is better. But I make fries on the regular, and these will not replace my other deep-frying methods.

I don’t own the cookbook but her recipe contained within it, Butterscotch Pudding With Maple Whipped Cream, is avail online. Has anyone tried it?