Keftedes! Another family favorite. We mix in chopped onion and parsley, and instead of grilling they’re fried in oil (Mom and Yiayia used generic oil, but I use olive oil).

I agree about the pressed meat in gyros. You just can’t find schwarma-style stacked meat around here. A Kurdish place used to do it that way (and still does with their chicken), but they switched to the Kronos cones. I asked at a good Persian place as I was ordering, and the owner helpfully said that he also uses the Kronos.

I’m sure the keftedes are delicious fried in olive oil!

Sadly, even in Greece 30 years ago most if not all the gyro meat was the pressed kind. Even on the smaller islands or off the beaten path places. Pretty sure I saw the real deal in Turkey though, but we didn’t try any. Our loss & it was due to a horror story we had heard about some terrible food poisoning. They had some fabulous looking street food and pastry shops in Kushadisi (sp?) We’ll have to go back.

We made avgolemeno soup last week, following a trusted recipe. It called for four eggs, separated with the whites beaten. We put 2 extra egg yolks in and the consistency was creamier and much more to my liking.

The trusted recipe came from a Cookbook entitled Greek Cooking at its’ American Best by Ellen Fergis and a coauthor. I spent a very enjoyable day at Ellen’s house rolling dolmades for a cancer fundraiser. She was a mentor to a good friend of mine. Anyway she lost her mother young and took over all the cooking duties for her family. When she married and had a family of her own, out of necessity like many of us do, she had to find shortcuts. One of her most successful was making avgolemeno soup using Campbell’s chicken & rice soup. as the base & then adding egg & lemon. She said it was delicious & I would definitely take her word on it. She made the delicious half moon Cretan pastries I keep talking about & whose recipe I use. Will post that little gem soon.

Teach me. I enjoy Greek cuisine and plan on hitting a local place in about an hour.

Souvlaki, fries & a salad would be a safe bet. Souvlaki usually comes with flatbread. Gyros are good if you don’t mind the pressed meat. Hope you enjoy your lunch!

I’ll get some recipes up soon in case you want to try it at home.

Yes, I would like to try preparing Greek foods at home.

I picked up some John Dory roe at the greenmarket, so I thought I’d try my hand at taramosalata. I brined the roe overnight, and then ground it together with soaked bread, lemon, onion and olive oil. Came out pretty good. Hope it doesn’t kill me. 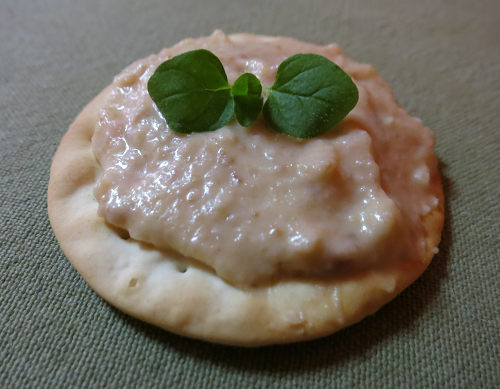 Alton Brown has a good recipe for homemade gyros.

How do you prepare gyro meet at home? Dumb question? 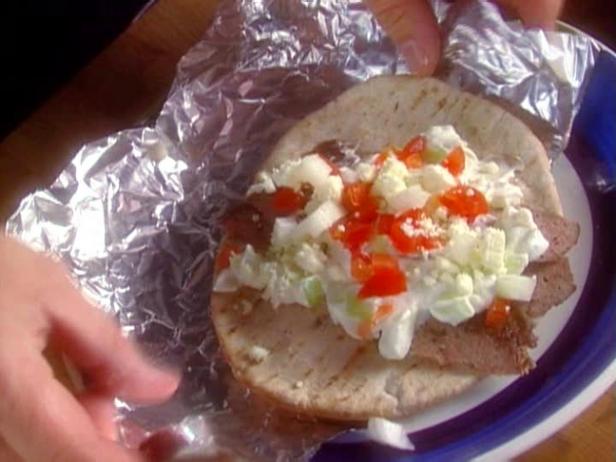 Get Gyro Meat with Tzatziki Sauce Recipe from Food Network

I put the meat through a grinder first before processing it further in to a paste in the food processor. I cooked it in the oven but on the grill would be very good. I sliced it after it had been refrigerated to firm it up for cleaner thin slices

Thank you thank you for posting this; I’ve never seen a recipe for this type of gyro meat. I am so going to try it. Would sub our preferred spicing however.

I do want to note if anyone makes the tsatziki sauce be sure to put the shredded cucumbers on a paper towel to let them drain & get the excess moisture out. The recipe looks spot on aside from that.

Your lunch sounds sooo fabulous & glad you enjoyed it. We have a favorite Greek place in Seattle & sometimes go there with larger groups. Food is always great & dining there is fun - Greek restos just have a happy vibe it seems.

Thanks. The method is completely different than I expected. Great use of the grill spit.

It was fun and a very flavorful meal. My personal fav is the grilled octopus and since I was the only person in the group ordering it, I really enjoyed every bite.

Gota squeeze out those cukes

I do want to note if anyone makes the tsatziki sauce be sure to put the shredded cucumbers on a paper towel to let them drain & get the excess moisture out.

Though I’m not an expert like others here, I do enjoy making tsatziki and agree that removing excess moisture from the cucumbers is key. I like to very lightly salt the shredded and seeded cucumbers then place them in a strainer set over a bowl in the fridge for a few hours. Then you don’t need additional salt in the tsatziki. You could also skip the salting part if you like.

Tsatziki is versatile stuff. We enjoy it as a dip for vegetables and with grilled or roasted meats. Flavorful addition to burgers as well.

That is an excellent idea & the pre salting will also help extract more water; will definitely put your method to work & thanks!

OK here is the recipe for the Cretan Cheese Half Moons. It is only one of the various cheese pastries made on Crete.

Combine all ingredients for filling in a large bowl, blending thoroughly
with a hand mixer on low speed or use a whisk, taking care to not get too much air in the mixture.

For pastry: thaw a package of commercial puff pastry.
On a lightly floured surface roll the puff pastry until each sheet is thinner, try to keep it rectangular. Don’t roll too hard or it won’t rise as much. Use a 4 inch diameter biscuit cutter and cut as many circles as you can, saving the scraps for later. Roll the scraps into a ball and roll out again, cutting as many circles as possible. Place I heaping tsp of cheese filling in the center of each pastry circle. Moisten edges of the circle with cold water, fold over and crimp the edges tightly with a fork. Place each half moon on an ungreased baking sheet, leaving at least an inch between pastries.

Bake at 400 degrees for about 15 minutes, until pastry puffs up and is a nice golden color. Serve hot.

Note: these freeze beautifully, just place layers between waxed paper. When baking the frozen pastries give them an extra 15 - 20 minutes or so.

This recipe makes about 25 cheese pastries.

The Greek American name for these is Kaltsounakia.

If anyone wants the puff pastry recipe that goes with these just let me know. I love making it & think it’s a rough puff or an easier puff than the classic.

Do you drain the ricotta at all before mixing?

No & the kind one would use in lasagne is just fine. Used cottage cheese in a pinch one time & that definitely needs draining which I didn’t do. They were still pretty delicious though.