Will anyone else be celebrating?

I probably won’t make haggis, but I am likely to make Cullen Skink, and maybe a Scottish dessert. 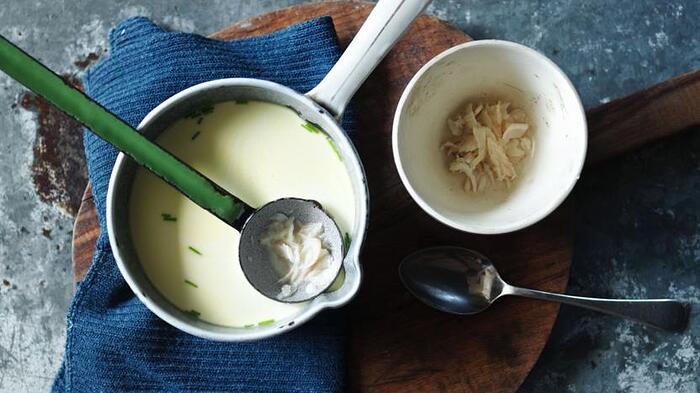 Burns Night menus don't need to be complicated. Check out our favourite simple Scottish recipes below. 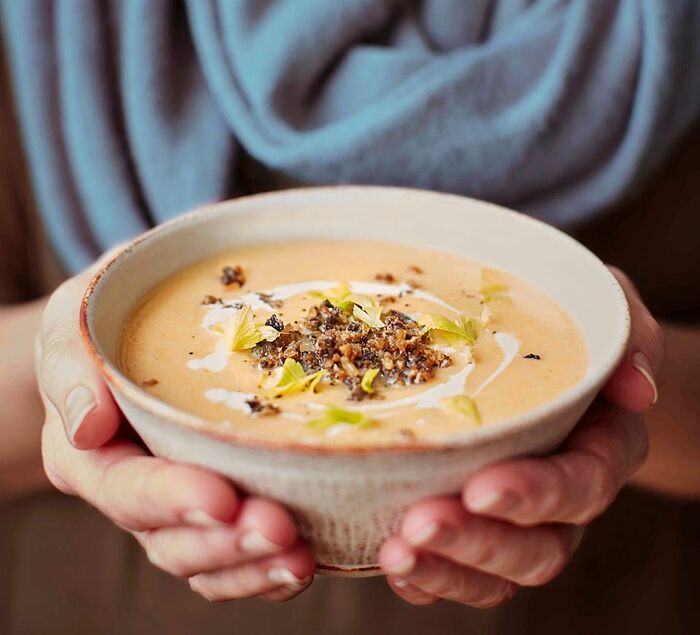 Take your tastebuds on a Highland fling with classic Burns Night dishes including haggis, neeps and tatties and cranachan, plus other Scottish-inspired dishes. 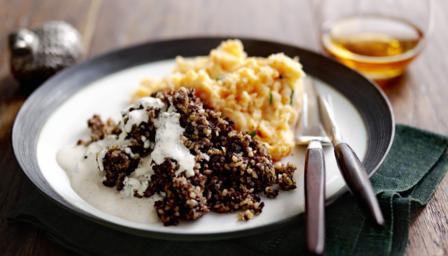 Won’t be celebrating but cranachan is a great dessert which we have made once or twice in the past. I love haggis - good quality ones, like McSween’s, are generally available in the supermarket here, so I’ve never considered making my own.

Have a nice evening. Do you have Scottish ancestry or is Burns Night just a good reason to try cooking some new dishes?

I don’t have any direct Scottish ancestry. My aunt was married to a Scot, and he would recite Burns, and I inherited a crystal bowl from his side of the family.

Burns Night is celebrated at a handful of pubs in Toronto. My local has some Burns- themed meals all week , and there are 2 Scottish pubs that usually have Burns poetry recited and dancing, along with a set menu. The pubs are offering the meal by takeout and delivery this week since all our dine- in operations are closed until at least Feb.

I’ve only attended one Burns Night so far.

I only spent 2 nights in Scotland, but I did manage to try haggis. I can buy canned haggis in the midsized city where I’m living, but I think I will try making one at some point, a version without the offal.

I haven’t made or tried Cranachan yet!

I tried my first Cullen Skink at a pub in the Peak District on my last visit to the UK!
My Cullen Skink 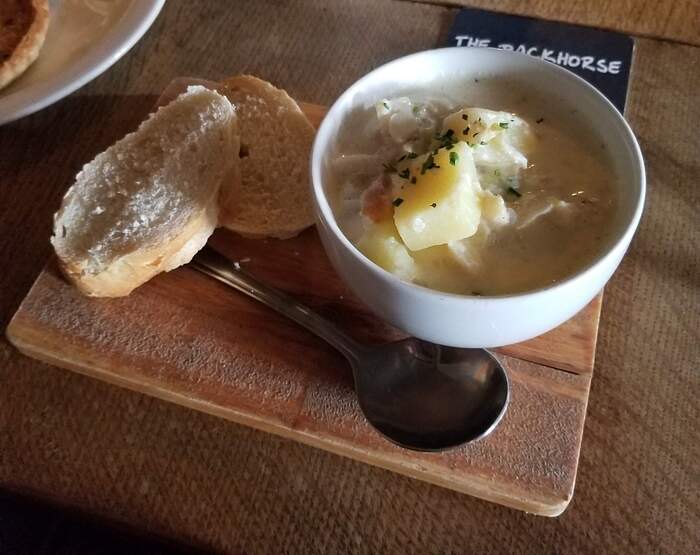 I’d forgotten that you been to almost my part of the world.

I see the card on your photo indicates the pub was the Packhorse. Was that the one near Bakewell by any chance?

Welcome to the Packhorse Inn. One of the best country pubs in the Peak District. Great food, great beer, with muddy boots, kids and dogs welcome.

I did make it to Chester, on a quick day trip. Visited the museum, cathedral and a tea room. Really want to revisit. My nickname is Dee, so I took a few photos of the River Dee.

Also hope to see Manchester up close some day. I flew into Manchester and took the train to Windermere in 2008. I’ve only seen Manchester from a train window.

Also hope to see Manchester up close some day

Shout me if you come back and we can tour the foody delights of the Rainy City.

Shout me if you come back and we can tour the foody delights of the Rainy City.

I will certainly do that. It’s been exactly a year since my last international trip!

It’s been exactly a year since my last international trip!

Me too. I should be in Tenerife at present. As I was this time last year. While we were there, we heard of the first case of Covid on neighbouring island. Nothing actually on Tenerife till after we got home in mid-February, when there was an outbreak at a hotel a mile or so from where we stayed.

The first community spread case in Japan was in the news 2 days before I left Japan.

The patient in Japan was a bus driver in Nara who contracted the virus from 1 of 2 tour groups from Wuhan, who visited Japan between Jan 8th and 12, 2020, iirc. The tour guide on the bus also came down with Covid. 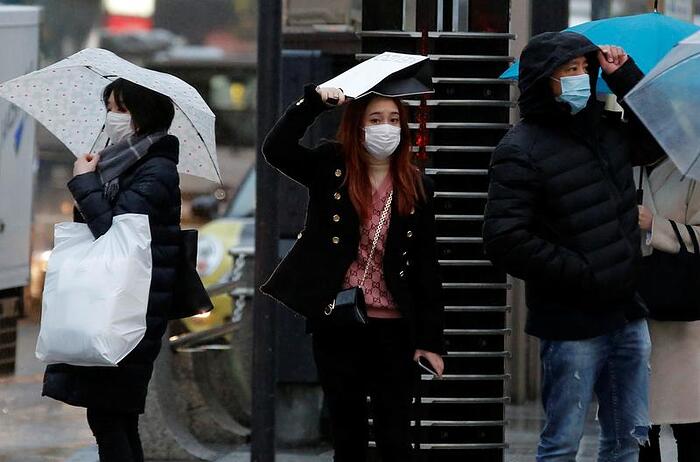 A Japanese coach driver has been infected with the new coronavirus after coming into contact with Chinese visitors, officials said on Tuesday, the first reported case of a possible transmission inside Japan.

The schools in Kyoto were shut down in early Feb. It would have been spreading in that part of Japan for a few weeks when I visited.

This recipe was in my newspaper this morning and I immediately thought of you. I know you’re not making haggis (and this uses a vegetarian version) but I thought you’d enjoy the read. I’m going to give it a try at some point. 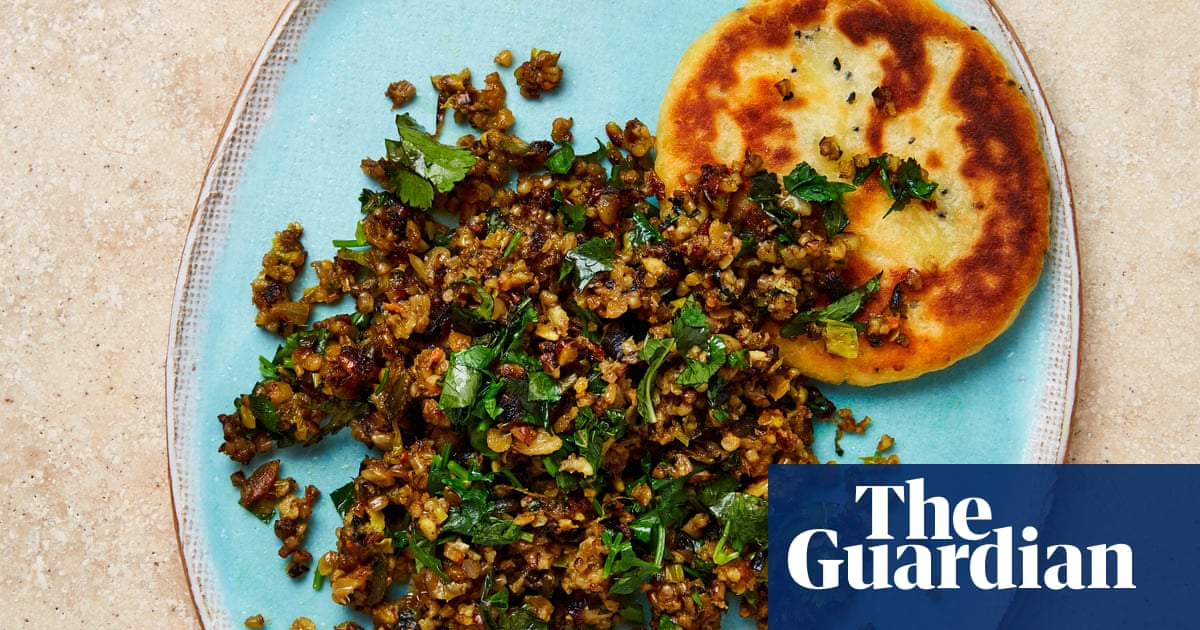 I was listening to this live programme earlier whilst cleaning the bathroom: “Burns Night Supper” 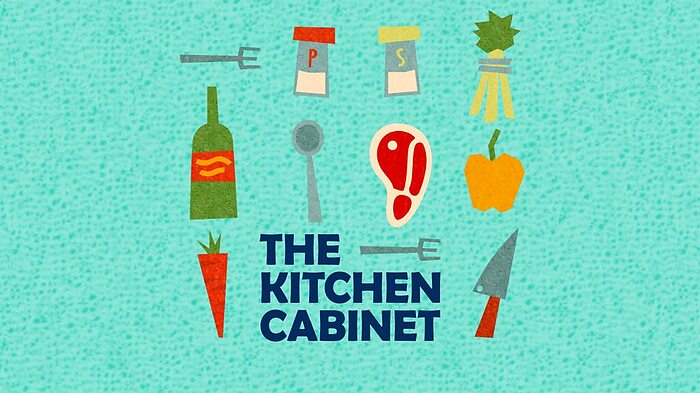 My cranachan, made with frozen raspberries, Quebec honey and Glenfiddich 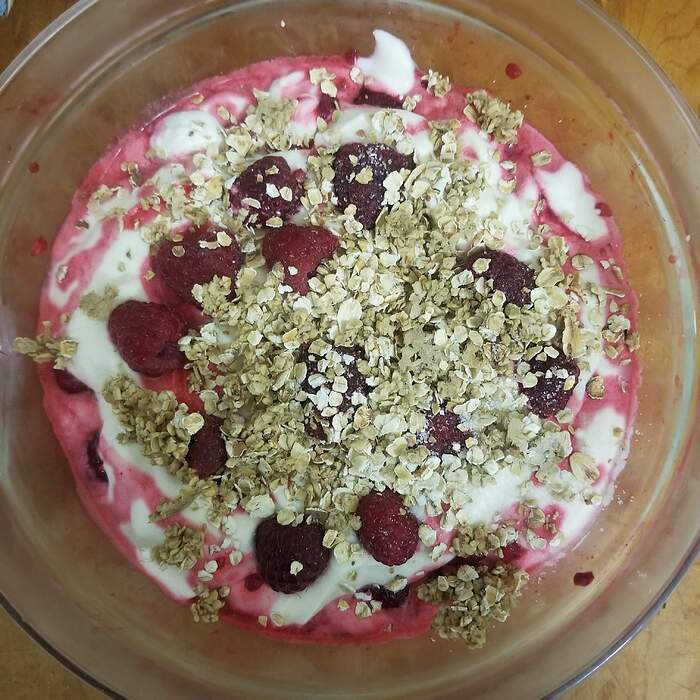 Is sticky toffee pudding the perfect marriage of stodge and sweetness, and what do you dollop on top? 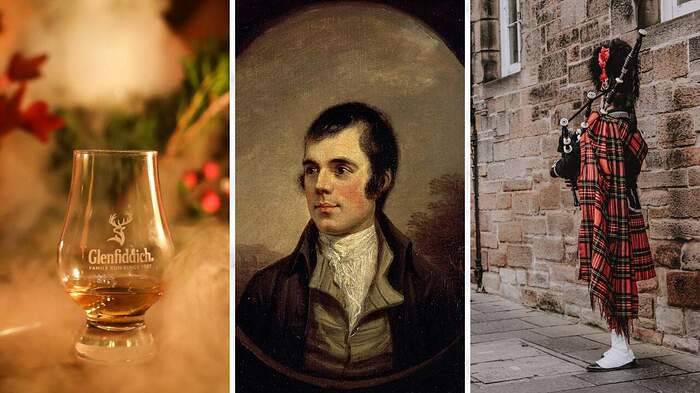 Burns Night is going virtual, and there are a lot of ways you can take part to toast and celebrate Scotland's National Bard, Robbie Burns.

Burns Night: stories of adventure and anguish from the Scottish diaspora

The story of the Scottish diaspora has been well told in print. Now a new audio book brings emigrant stories to life in their own words.

Generally accepted to have been invented (at least in its usual form) by the late Brian Slack, then owner of the recently closed Sharrow Bay Hotel (where I’ve eaten it)

Yes. There are a few origin stories on the internet. This is the main story. Another one involves some Canadians.

Here is the lesser known story involving Cdns, who maybe gave recipe to the manager of a hotel in Lancashire 20 years prior, who then gave the recipe to Coulson and Lee who were employees at the Sharrow Bay Hotel. 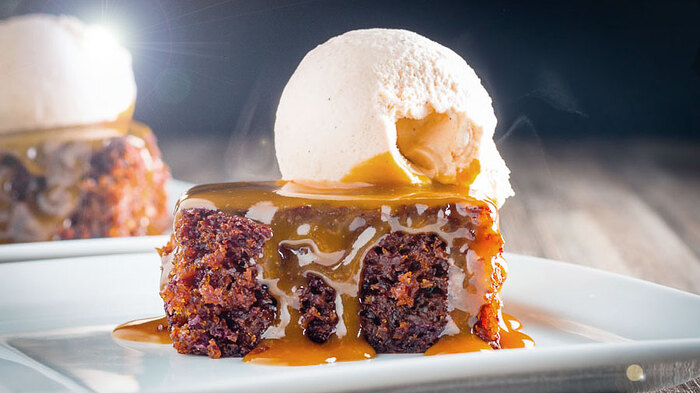 Sticky toffee pudding is one of the sweetest treats in the Commonwealth. Learn more about its history and delectable ingredients here. 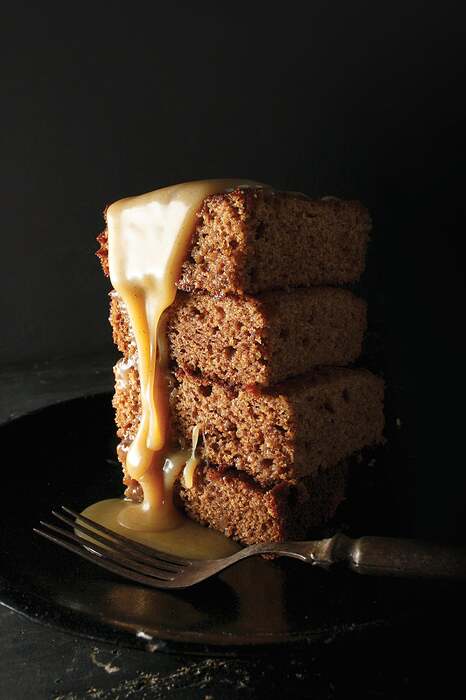 One spoonful of sticky toffee pudding at a café in northwestern England, and we were euphoric. Surely, this was the last word in extravagance. The pudding before us was warm and spicy, an impossibly moist gingerbread cake larded with chopped dates...

There was a reason my ancestors fled Scotland in the mid 17th century.

Keeping with a Scottish theme, I made mussels (from Newfoundland) with Scotch, cream and garlic. 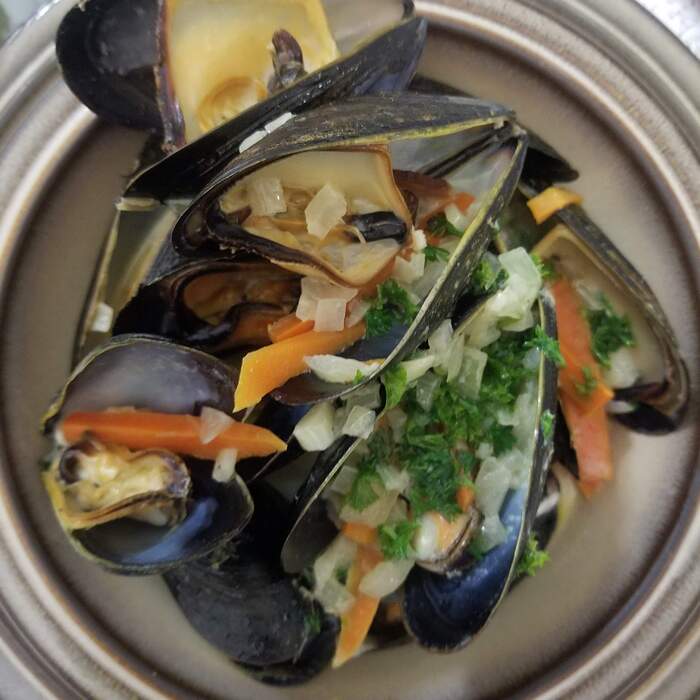 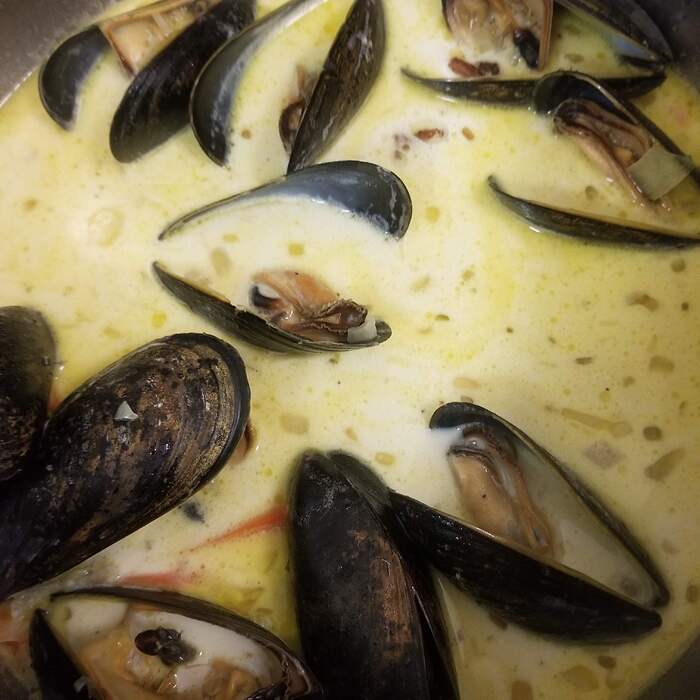