BIRYANI — the real deal, travesties, and other tales

Well, let’s start with the video that caused enough of a personal reaction for me to create a post: 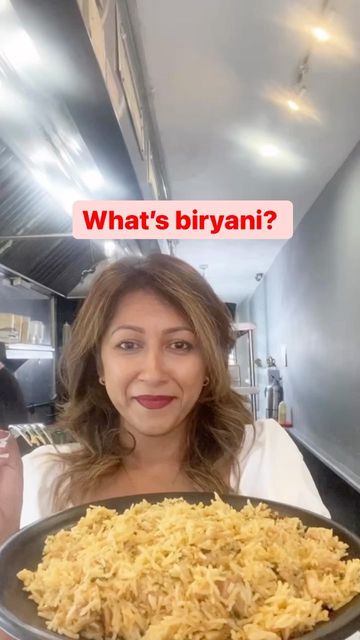 Pretty ballsy to start with “What’s Biryani?” and then post something that absolutely no one would identify as Biryani

I mean, that’s not even Pulao. That’s curry-rice, like I could mix up on a plate. Sigh.

But here’s Asma Khan in London mixing up the layers of a real biryani:

And here’s a Bombay Biryani being made in bulk in a big pot (handa) in India: Anyway. Do you like Biryani? What kind(s)? Where do you like to eat it? Do you cook it? And so on.

I’ll start. When I say just Biryani, I mean Bombay Biryani. That’s a specific style — generous onions and tomatoes in the base, always potatoes, and the secret ingredient — dried apricots that disintegrate during the long, slow cook and are only discernible by the kernel that remains. I’ll eat other biryani, but this is the one I crave.

I think this style may be called Sindhi Biryani in other places.

Not a huge fan of Awadhi/Lucknowi or the derivative Calcutta/Kolkata Biryani because they taste more like what I grew up eating as Pulao — less spiced, more subtle (no tomatoes, subtle onions).

The first time I ate Hyderabadi Biryani was in Hyderabad, and I didn’t love it because it seemed like a mixed-up version of the Biryani I knew. That was the kid me — the adult me enjoys this style, and the many other southern styles of Biryani (that may be more identifiable as Biryani to some in North America, especially the Bay Area).

I almost never order Biryani in New York or elsewhere North America because what’s usually served some travesty resembling the video linked — curry mixed with rice, and if they’re trying to be really “authentic”, throw on a dough lid and let it brown so there’s some table drama when it’s lifted off (see: Adda in NYC). Nothing has actually been cooked as it should. The divey cab driver places are an exception — it’s not the Biryani I want, but at least it’s Biryani of some real sort.

Yes, I like biryani. I only ever eat it restaurants where the better versions seem to be Hyderabadi. I’ve no idea whether this is a cooking style unique to the city or simply a marketing ploy from our mainly Bangladeshi owned “Indian” restaurants.

I know the theory is that the lamb is cooked in the same pot as the rice. I suspect I may never have eaten an authentically prepared dish and what I have eaten and enjoyed is simply cooked lamb mixed through the rice.

Are there any give-aways that a restaurant dish is or is not traditionally prepared?

FWIW, one of the owners of my favourite South Asian restaurant is Iranian. In the past she’s suggested I cook a Persian biryani but I kept forgetting to see how it might differ from an Indian one.

Chances of a good Biryani in the UK are a lot better given the overall quality of indian / south asian food.

The Iranian lady is right of course, Biryani originated in Persia (as did all Mughlai food) but was a completely different dish there.

I’d venture that you can make a great biryani at home if you have access to a south asian store selling boxed biryani masala (of late there even are a couple of basmati brands selling a biryani “kit” that comes with a wet masala paste and basmati rice).

There are two techniques for cooking the meat and rice:
(1) Kacchi (raw) Biryani — raw (marinated) meat and soaked but uncooked rice are layered, then the pot is covered with a lid then sealed with dough, and everything cooks together very slowly under “dum” — the steam that’s generated inside.
(2) Pakey huey gosht ki / often shortened to Pakee (cooked) — the meat is cooked separately (korma), the rice is par-boiled, then they’re layered and the rest is the same, but it takes less time because everything is almost cooked, it’s just being finished together.

The raw version is trickier to get right, so most of what you’ll see is the par-cooked style.

Are there any give-aways that a restaurant dish is or is not traditionally prepared?

You can tell if what you got served is curry-rice vs biryani if it’s wet — Biryani is never wet due to the finishing process, where the liquid from the meat curry is converted to steam or absorbed into the rice layer adjacent to the meat. That’s why you’ll sometimes see “saalan” or meat gravy served alongside some Hyderabadi or other typical Muslim versions, and raita with others, for some added moisture.

There are 3 layers really: the top rice which is just white (or tinted by saffron), the middle where the meat gravy melds with the rice, and the bottom, which is the meat (and potatoes). That’s why Asma Khan was mixing up the pot before serving — so each serving has all three components.

Ah. If wetness is the key then I might actually have eaten more traditional versions than I thought. Generally speaking, the ones I’ve eaten in the UK have been pretty much dry - just meat and rice - but with a sauce, or raita, served separately.

Thanks very much for all of this. I couldn’t get the first video to load but there’s enough here to digest from the second video and your comments. I guess I have never had a wet biryani either and have had several that were dried out, not just dry.

There was an earlier thread on HO, probably 4-5 years ago at least, which was very informative. I remember several contributions, maybe even one from me, of lists of various styles, including Sindhi, which I thought sounded very good. I picked up a package of Shan mix for that but have never gotten around to making it. I haven’t been to an Indian grocery store in several years, now, due to personal health issues and Covid.

Places here don’t usually identify their style but I’m pretty sure I’ve never had one with potatoes. I gather from the video the potatoes are left in pretty large chunks. I want to find an Indian restaurant with an open kitchen!, where I can watch all this going on

The style I’m most familiar with is from Kerala as I spent several months a few years back exploring all the places in our southwestern suburbs that offer that style - with raisins and cashews. I did not like it at first, slightly sweet and not spicy/hot, but got used to it.

I like biryani but do not order it often because the servings are typically so huge and I guess I would say a bit monotonous for a one-dish meal.