Who needs cutlery anyway? Why food is more delicious when you eat with your hands (Guardian) 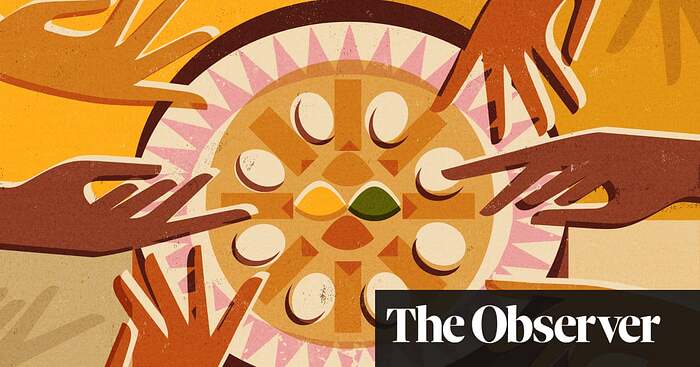 Who needs cutlery? Why food is more delicious when eating with hands

I was anxious when my fiance met my family. Would he master the art of eating with his hands? Luckily, he’s a fast learner… As kids, we were taught how to eat neatly with our fingers, but also how to eat Indian food with cutlery when not at home in certain settings (for eg: at a standing party, or at school) while maintaining the integrity of the way the food should be eaten (dry chapati rolled up into a cigar first, take a bite before dipping the spoon into wet items to follow into the mouth).

My nephews were taught to eat with their hands at some early stage – one took to it like a duck to water, the other knows how but wants everything on his plate separate anyway – with distinct spoons if he can swing it

This especially made me smile:
“In Bangla we call it makhani – mixing. It is a sign of love shown by parents towards their children. I find myself doing it for my son when I feed him, pressing the grains of rice and chicken with my fingertips, shaping it into small mounds that he can pop into his mouth. I remember my father doing the same for me, carefully sifting out any bones from fish and offering me mouthfuls of lovingly prepared rice. I have a cousin, a medical student in her 20s, who still asks her dad to makhai the rice for her when she goes home to visit.”

We have different names for it by language, but my dad did this too – little balls of rice on my plate, each “for” a family member if I was being fussy, and I did the same for my nephews when I’d feed them dinner when they were tiny.

My non-Indian friends took it as a challenge to learn to eat Indian food with their hands (like I did learning to use chopsticks), good for them! It helped them significantly with Ethiopian food when we discovered it.

But rice is always a hurdle, the final frontier – and yet, she’s right, I’m convinced rice actually does taste better eaten by hand

You missed your chance to watch me try to eat rice with my hands at Buka. It wasn’t pretty.

But yes, there’s technique which comes from practice, same as with everything else. I’m sure native chopstick users would flinch when they watch me wield them haha.

Your sharing this article, and your response to it, evoked all my memories and feelings too.

Mine is not the first/only intercultural marriage in my family and we have been married almost 30 years, but before we married, DH visited India with me, and among other things we all went to my father’s ancestral village in South India where we got the full hospitality treatment: the floor-seating banana-leaf vegetarian feast. Sit cross-legged, bend forward so nothing lands on you, and eat rice with drippy dal, rasam, yogurt plethora of sabzis, etc. very neatly with your right hand fingers only (DH is a leftie). He passed this ordeal with flying colours and the leaves and leftovers were folded and fed to the cows waiting in the shed in the back. Wash hands before and after eating in the small outside area behind the kitchen.

Yes, we were also taught to eat neatly and correctly with fingers and also with spoons etc. And when to deploy which cultural mode - part of the code switching strategies that all urban desis seem to absorb. I am also pretty OK with chopsticks.

Some Indian dishes lend themselves to Western cutlery less than others. I feel quite sad when I see desis in eateries here eating their idlis, dosais, vadais, parathas, naans, for example with knife and fork - seems pretentious, like they think it’s great to be so Western that you reject some basic aspects of your roots. I am sure there are other regional dishes that are just better approached with fingers than attacked with metal implements. I don’t know if Iranian people traditionally eat their food with fingers or cutlery, but a quip attributed to the last Shah of Iran is that eating with fork and knife is like making love through armor.

I was also raised with the Ayurvedic notion that touching your food has various benefits. Other than these and aside from the sensual enjoyment, when someone is feeding someone who cannot eat on their own (e.g. babies, very elderly, etc.) touching the food also ensures that temperatures are comfortable and no hard or poky bits get into the mouthful.

My kids like Indian food and when young I taught them to eat with fingers, so they can do it, including chapatis torn with one hand and not rolled up and bitten. Occasionally I sent them to preschool / elementary school with something like baby idlis with dip, and had to push back at the teachers who tried to discourage them from eating with fingers. Nowadays, they eat chapatis, parathas, idlis, dosais, etc with fingers but dal/rice and yogurt/rice with spoons.

I also remember a couple of my professional colleagues in the US whom I now think of as jerks, making fun of Indian food / finger eating with rude gestures in front of me, while I was to shocked to say anything. One of them was Asian American and one was Euro American.

I also remember in upscale Indian restaurants in India, at the end of the meal, finger bowls (with warm water and lemon slices) would be provided to guests to wash their fingers at the end of the meal right at the table, though most people would after that go to the washroom and again wash hands and rinse mouth. Nowadays finger bowls are kind of rare because most urban desis have Westernized to use utensils in restaurants, and even those who eat with fingers will just wait and go to the washroom.

I think you described that eating pizza with fork and knife would be seen as a faux pas in the US. I recall another HO thread where the poster’s husband would only eat pizza with knife and fork due to his Canadian/British culture. I have hosted guests from the Netherlands who ate their tacos with knife and fork while we rolled them up and ate them with our fingers.

Most non Indians claim a pass for not eating Indian food with their fingers but using cutlery instead, on the grounds of unfamiliarity. But I know I will never get the same pass for eating IDK, pasta or chili or something, with my fingers.

Clarifying: I feel sad seeing desis in South Asian eateries anywhere eating with f&k; but I feel extra judgmental when I see this happening in India (where I am currently, thence the ‘here’).

I was to shocked

Aargh! Hate that kind of typo. Should read “I was too shocked to say anything”.

As you well know, this is a very specialized skill, and not one I possess! We were fascinated as kids on a vacation south (Bangalore, Madras, and everywhere along the way) when we first encountered people eating soupy rasam/sambhar and rice by (cupped) hand, because we couldn’t conceive of being able to do it! I then forgot about it until a lifetime later, when I stayed with a Tamilian college friend and her mother in Delhi a few years ago, and we ate bisibelebhat for lunch one day (which I know isn’t as soupy, but still)

Sit cross-legged, bend forward so nothing lands on you

Hahaha - the last time I ate seated on the ground was as a little kid in my grandparents’ kitchen every weekend, before it was renovated with western-style counters and stovetops. Definitely trickier than eating at a table! We sat on flat stools but the thalis were on the floor. It never seemed tricky then, though, just normal (even though in our own house we only ever ate at a dining table).

a quip attributed to the last Shah of Iran is that eating with fork and knife is like making love through armor.

Love it! And true… I’ve eaten biryani with a fork, and switched to fingers because it just didn’t taste right. Something that has to be experienced, can’t be explained.

My experience is they are always available when requested, though if I ate something especially strong, the lemon (and salt, another childhood lesson) needs some help from soap at a basin.

That said, I am constantly surprised that Indian restaurants in the US don’t provide wet naps either before or after a meal (even though they are commonly offered at Japanese restaurants) when the correct way to eat that meal is with your hand. I mean - even at a minimum, you have to touch the ubiquitous naan to dip it into things!

Most non Indians claim a pass for not eating Indian food with their fingers but using cutlery instead, on the grounds of unfamiliarity. But I know I will never get the same pass for eating IDK, pasta or chili or something, with my fingers.

Oof. You got heavy with that, but so true. I have even gotten looks eating Indian food by hand at an Indian restaurant.

My mom has a similar nit about native English-speakers mispronouncing common/widely used words from other languages (and of course non-Euro names) vs. the expectation for non-native English speakers to speak and pronounce things “correctly”.

My mom has a similar nit about native English-speakers mispronouncing common/widely used words from other languages (and of course non-Euro names) vs. the expectation for non-native English speakers to speak and pronounce things “correctly”.

The converse of which is the side-eye and shade thrown when a native English speaker pronounces the word according to the original pronunciation (like Notre Dame pronounced No truh Dahm instead of Notrrr Dayme when referring to the Parisian cathedral rather than the midwest university) because it’s allegedly snobby and affected.

Yes I have had this conversation IRL

At home, the US, I eat most things with cutlery. But for some perverse reason, in France, where they eat everything with cutlery, I find myself eating with my fingers. Frites, of course. Bits and pieces of veg from my plate. Parts of salad. And, for shame, I dunk pieces of baguette in my wine. Dress me up but best leave me at home!

I have dipped many things, but baguette in wine is a new one!

Its me. I have been called snobby, elitist, and full of myself because I dared to pronounce something in a non-anglicized manner.