We should start a cilantro thread. What an awesome herb! It is so versatile, tasty, fragrant and easy to grow.

I like to doctor the salsa in the east Houston barrio restaurants with a bunch of cilantro and onions. Learn the secrets to making Chipotle Cilantro Lime Rice at home. It all starts with the right type of rice cooked in an unusual way.

Oddly, as much as I love cilantro, I once ordered cilantro soup at the French Laundry. It was a bad night there as it was one of the few where Thomas Keller was not in the kitchen (pre-Per Se). The soup was an off-putting color and I found cilantro did not make for a great tasting soup!

I love Harira soup and with lots of cilantro added.

In Portugal, you can find many different versions of Cilantro-Potato soup, both hot and cold. This is the ideal soup for a tasteful dinner, the coriander aroma enhances the taste and at the same time is light and creamy... Dare yourself!

Well it looks like someone started a cilantro thread under my name lol. Well let’s turn this into a cool topic!

Preferably lubricate with a dash of oil or cider vinegar so you can get the cilantro out easily.

While that is getting mixed into a puree, mix sour cream and half bottle of tabasco. This is green tabasco so it is mild. Combine cilantro puree and let it meld for 30 minutes.

3 ingredients, literally, and full of flavor. This is a classic recipe that I got many years ago in a bottle of tabasco. The key is to let it sit for at least 30 minutes so the cilantro taste really comes forward. You can use this in so many ways: chips, veggies, burgers, sandwiches, salads, etc. If you love cilantro and want something simple, try this out. Again, I didn’t make this up, tabasco showed me the recipe

Well it looks like someone started a cilantro thread under my name lol.

Oh, this post was separated from the previous thread, actually the first post happened to be initiated by you. LOL, since now it is under your control, feel free if you want to change the title of this thread to your liking.

Your recipe looks delicious, most of the time, cilantro is just used as a finishing herb.

Would like to know if it can be used as a major ingredient, example @martini 's cilantro potato soup sounds great.

It’s nice that you guys started a new thread. Hopefully us cilantro fans can learn some things

Actually, is coriander the same as cilantro?
I’m a bit lost, in French cilantro is coriandre.

Here in new jersey you can grow it easily. Just put it in the sun and it grows like a weed. You don’t have to even water it. The rain and sun will take care of everything.

Thanks, some sites explain that coriander is the seed of cilantro.

Yes that is correct. The seeds are generally called coriander while the plant is called cilantro here in the US. Same plant though. It is a leaf used in a lot of Mexican dishes…as well as other countries. The Thai food I eat has a lot of cilantro in many dishes.

Yes, cilantro is the Spanish word for coriander in whatever form and became the most common name for the fresh herb in the US after the several variations on “XXX-Mex” food became so popular here. (A little ironically, a lot of people who like and buy cilantro probably have no idea the “proper” English word for it is coriander. Also slightly ironic because while there is another, unrelated native herb with a similar flavor, coriander per se is an Old World plant that didn’t exist in the pre-Columbian Americas…) Before it became so incredibly popular as “cilantro”, it was often called “Chinese parsley” in mainstream US food-writing (when it was referred to at all, that is…)

Here in new jersey you can grow it easily. Just put it in the sun and it grows like a weed. You don’t have to even water it. The rain and sun will take care of everything.

I’m in NYC and that’s true here also. But only if you grow it in the ground, or in a pretty large raised bed. I’ve had zero luck over the years growing it in pots. It bolts before it ever gets to a decent size, even though it keeps reseeding itself and growing up again. It does grow but I rarely have much to use. Very frustrating since it’s something I use constantly.

Do you guys know culantro? It’s like cilantro on steroids, but easier to grow, at least in “tropical” climes. I use cilantro when I can’t get it, but they sometimes have it at the Asian market labeled ngò gai.

Culantro according to Spruce Eats

Culantro according to World Crops

Recipe for sofrito with culantro

Cilantro and white onions chopped together is my favorite condiment for street tacos.

Let’s not forget a Ban-mi sandwich.

Also chimichurri, a bright and vibrant sauce associated with red meat that I find equally nice on veggies, bread, and fish. Drizzle or dip. Choose your own adventure. 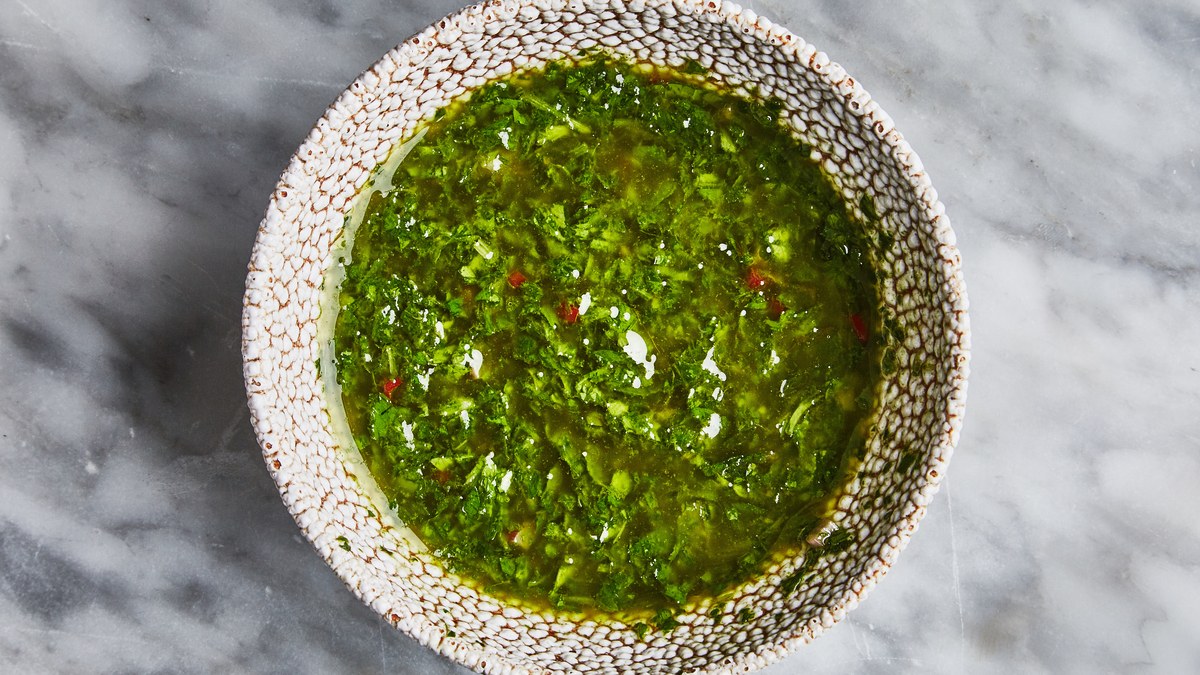 This recipe for a colorful chimichurri sauce doubles as a marinade and an accompaniment to all cuts of beef. And, yes, you want this.