Happy April! Let’s see how many enthusiastic cooks we have here at Hungry Onion.

Because of the last minute decision to start a Dish of the Month, I have chosen the dish for April 2017: CHICKEN AND RICE. (Next month we will be democratic and have nominations and voting.)

Please share your favorite recipes for dishes with CHICKEN AND RICE as the main ingredients. These may be family favorites, new dishes you’ve been meaning to try, or recipes from your favorite cookbooks.

When posting, please write the name of your recipe in ALL CAPS.

Nice! Thanks for starting this. We are off for some Paella tonight so I’ll see if it involves chicken. Then I’ll get to figuring out what I want to cook.

Made this on an impulse last night, with the left overs from half a rotisserie chicken. I had on hand the entire half-carcass, with the full wing, half the thigh and half the breast flesh still clinging to the bone.

(The fat from the chicken skin coats the rice as it cooks – giving a rich dish.)

This is so brilliant! I get bored with just stockpiling rotisserie chicken carcasses in my freezer for stock. I’m doing this next time. Thanks.

I, too, collect the carcasses of rotisserie chickens past, and (a) faced with yet another last night, and (b) wanting to make dinner for myself, thought I’d try this.

Thanks, Bookwich! Fab choice for the first challenge. The possibilities are endless with these 2 ingredients.

I’m going to challenge myself to make something that’s not Asian, because that would be quite easy. But of course I will make at least a couple of Asian chicken and rice meals simply because they are delicious

Me too! So many wonderful Asian chicken and rice recipes, I’m craving conjee right now.

I am going to search recipes in the style of Basque . Then make it my own . I am terrible recipe follower .

A good choice for DOTM, Bookwich - I’ll have to see what I come up with this month. I have several one-pan dishes I’ve made in the past that are pretty good - we’ll see what I’m in the mood for when it comes time for making a chicken & rice dish. Thanks for starting it off!

Even though I don’t eat rice, I actually have an entree, but since I don’t measure much, I can only describe it and give some measurements. March was a very wintry month here, so I got into hunkered down comfort mode and made something really uncharacteristic of my cooking, smothered chicken, repeatedly, we loved it so much. I didn’t use a recipe, because, how hard could it be?

I either bought thin sliced cutlets when in a rush, or sliced some blsl chicken breasts into slices and pounded to get them uniformly thin. Cooked them til not quite done, just a bit golden on each side in a large skillet in oil (avocado oil in this case) and set aside.

Browned slices of 3 large onions and a lb of sliced crimini mushrooms after adding some more oil to pan, and when about done, added about 2 lg cloves garlic, minced. As soon as garlic got fragrant, I added a cup of chicken broth and mixed til warmed through, scraping up all the brown bits from the pan, then turned lower, added a pint of heavy cream, stripped a bunch of sprigs of fresh thyme leaves into it, let it all warm, added salt and black pepper to taste, then added chicken, burying it in the sauce for a few minutes on simmer til it was cooked through. ETA: I forgot to mention that I used a couple of TBS of corn starch mixed into a bit of the cream to thicken it. Alternatively, more low carb, I’ve found mixing in tempered egg yolk does a good job of this, too.

We ate this over riced cauliflower cooked in chicken broth, which is how I’d make regular rice, too. FGBP over all at the table, of course, or white for that matter.

I think cauliflower rice is acceptable. Some people can’t eat rice. And I think it’s okay for vegetarians and vegans to use seitan or tofu, as long as we are true to the concept of a chicken and rice dish. As you did.

Halal style chicken with saffron rice. DH had Halal Guys for lunch last week and he brought me packets of their white sauce and hot sauce. So the sauce, and this new topic inspired dinner. 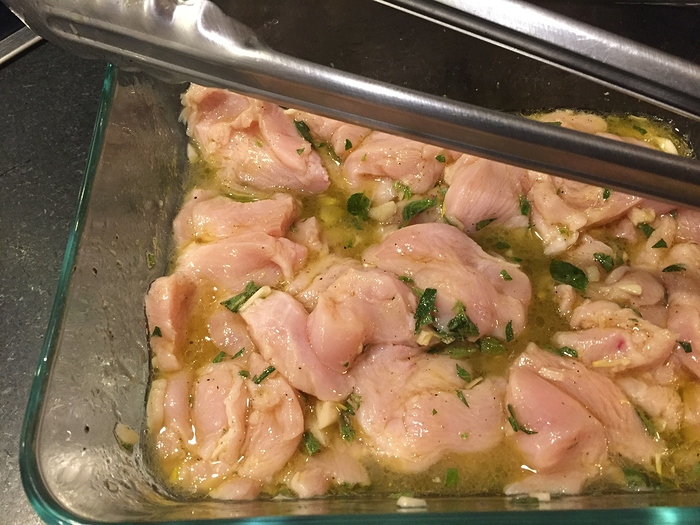 Saffron rice. Boiled jasmine rice while onion cooked in evoo and butter. Added turmeric, saffron, salt, cumin, and lemon juice. Added the rice to the spice mix and let it cook until the rice got a little crusty on the bottom. 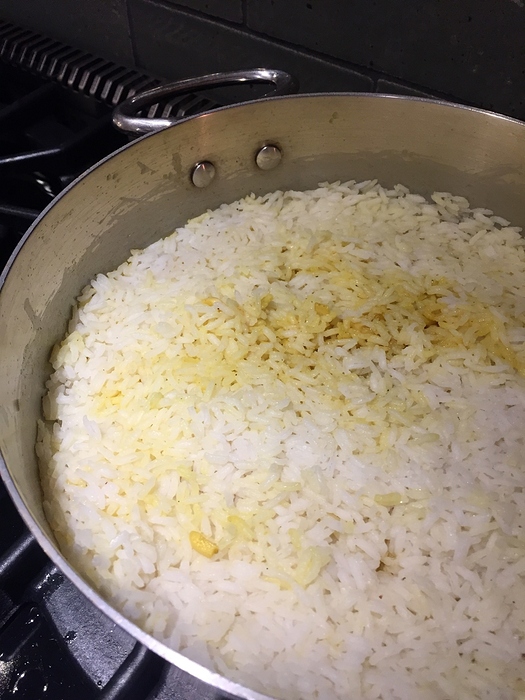 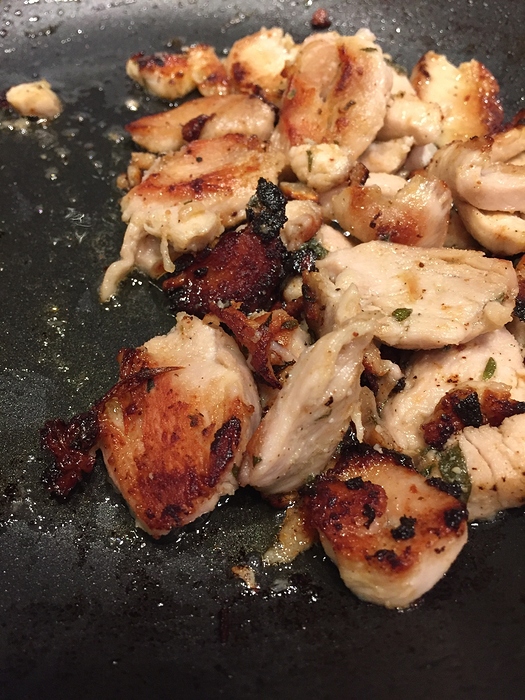 Served on top of romaine hearts. Dressing was the white sauce. I add the hot sauce to mine. The hot sauce said warning , very hot! Wow, it was super hot!! 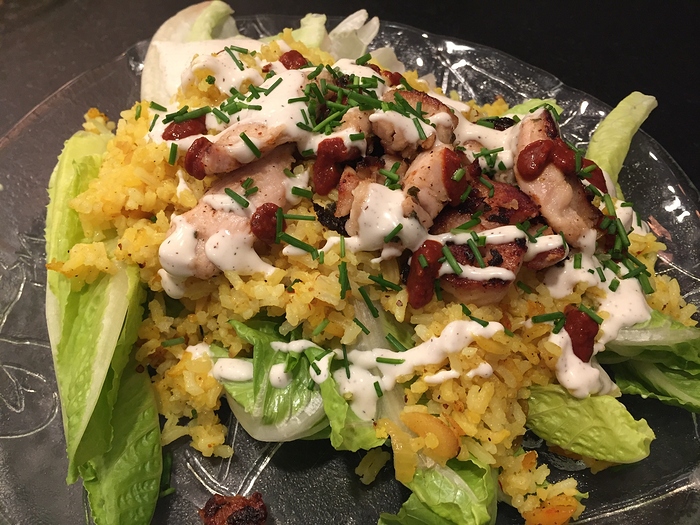 My first chicken and rice meal. Everything kimchi. Got to use up quite a bit of kimchi liquid.

Marinated chicken thighs in leftover kimchi liquid. I was disappointed not to find thighs with skin on but didn’t have time to go to another supermarket. 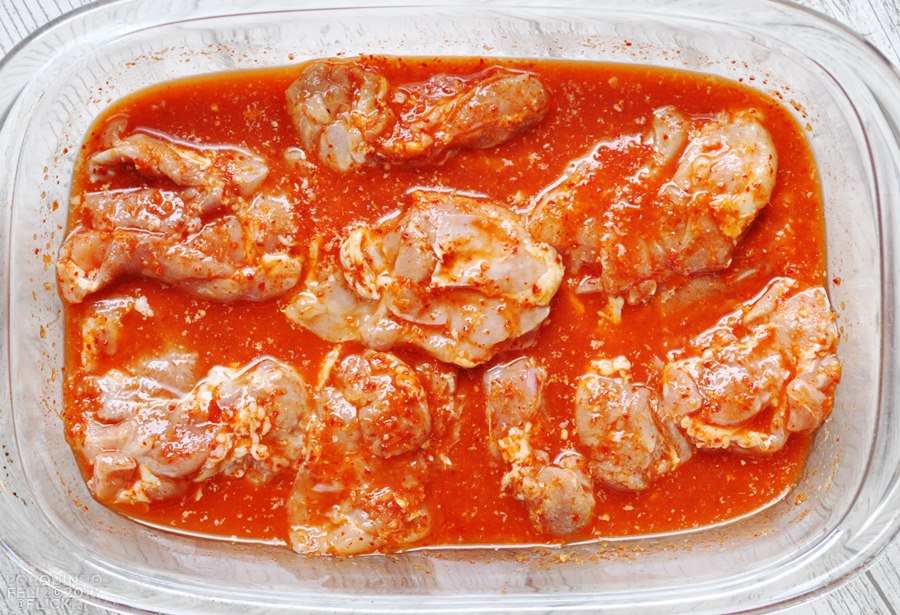 Seared then finished in the oven with several bastings. I boiled and reduced the marinate to a thick sauce for basting. Also added a pinch of sugar and fish sauce to encourage caramelisation. 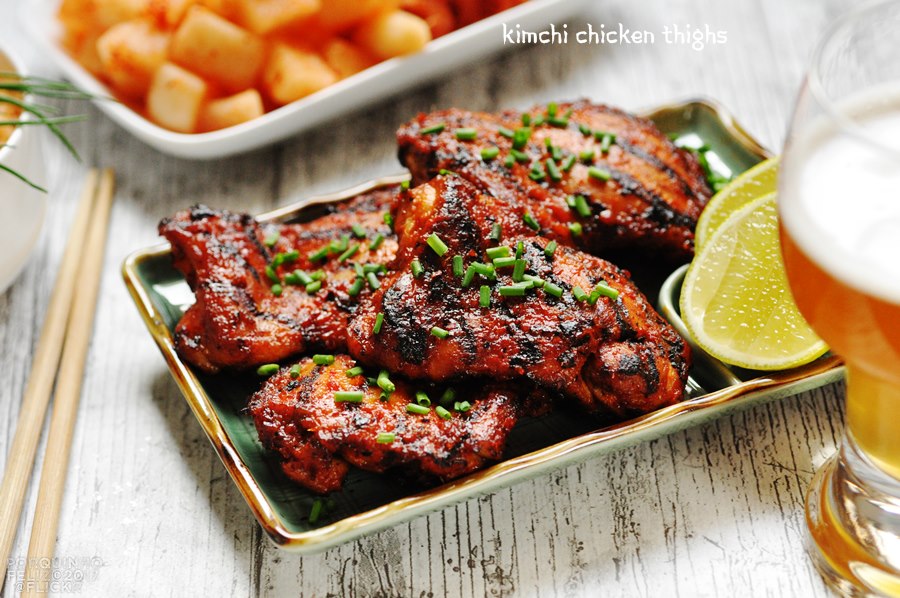 With homemade kimchi and kimchi fried-rice. 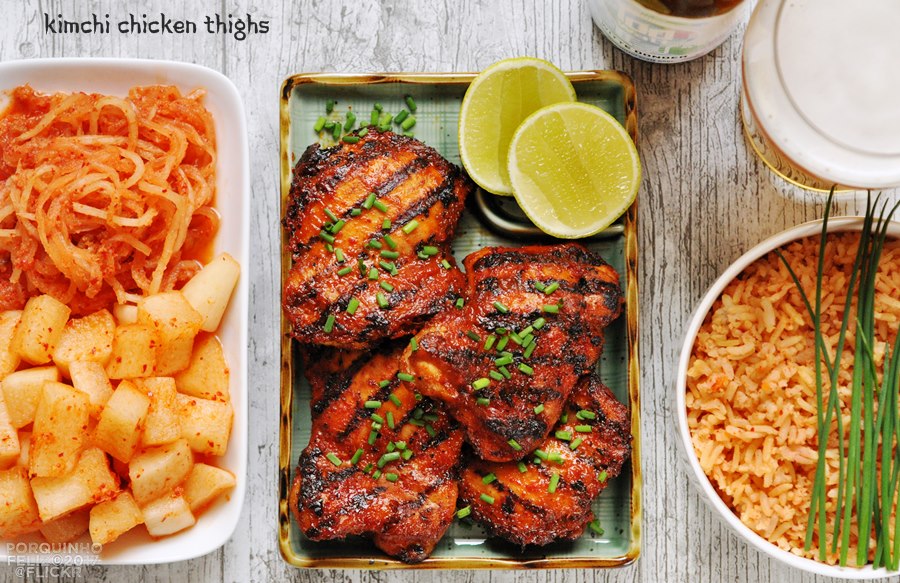 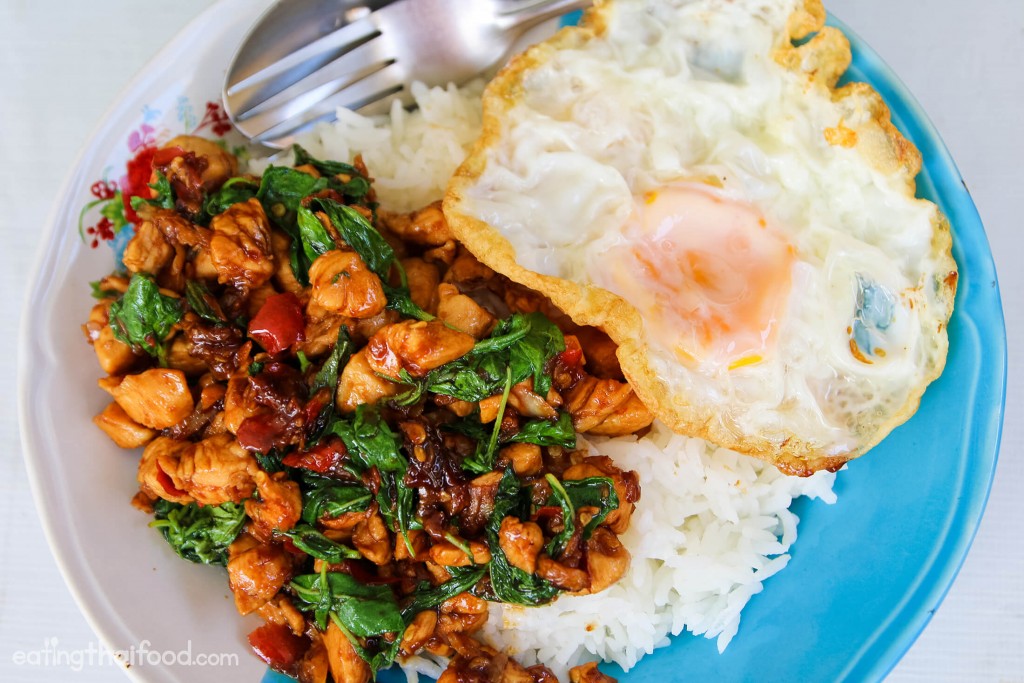 This Thai basil chicken recipe (pad kra pao gai ผัดกระเพราไก่) is one of the most popular Thai street food recipes, and you're going to love it! 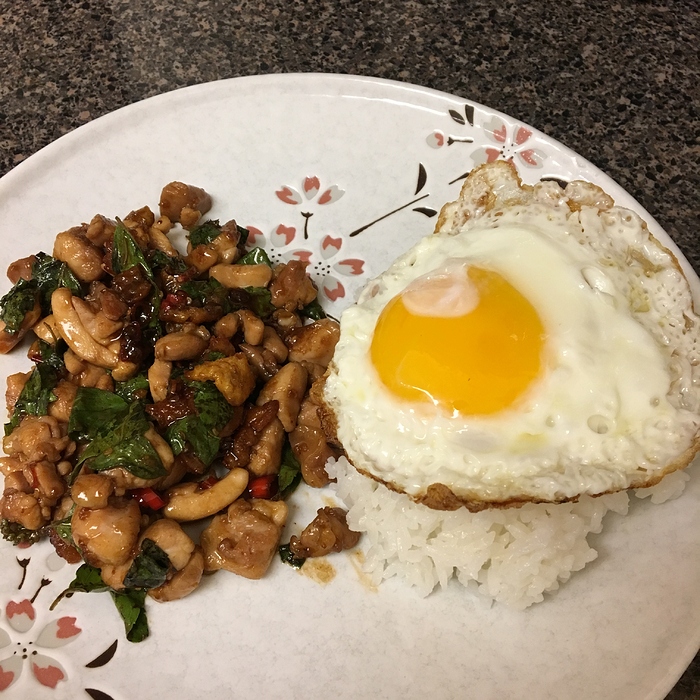 No, I did mean two-thirds of a cup. Soaked basmati rice needs only slightly more water by volume than the original volume of rice (half cup, in this instance). I like my rice on the firm side, though. If you want softer rice, increase the liquid to 1 cup.

2 to 3 cups will yield something far too mushy. If, however, you were to use that much liquid, I’d suggest cooking it for a longer time to get something more congee-like in texture. That sounds like an interesting variation.

thanks for the clarification.

Don’t eat a lot of Thai food but chicken with basil is one of my favourites. Always ordered this dish at my regular Thai restaurant in my previous life. I remember it was lighter in colour.

Will make something with real names when I get to the organic butcher this saturday.

Chicken mince was on sale last week. Bought it but had no idea what to make then today I decided to use some tamarind pulp as a sauce for the mince. 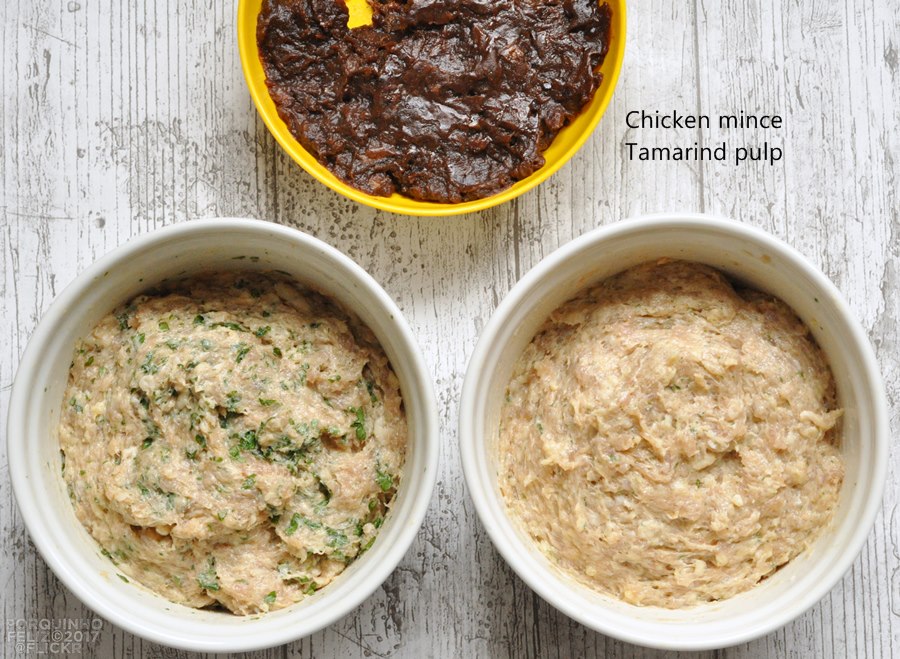 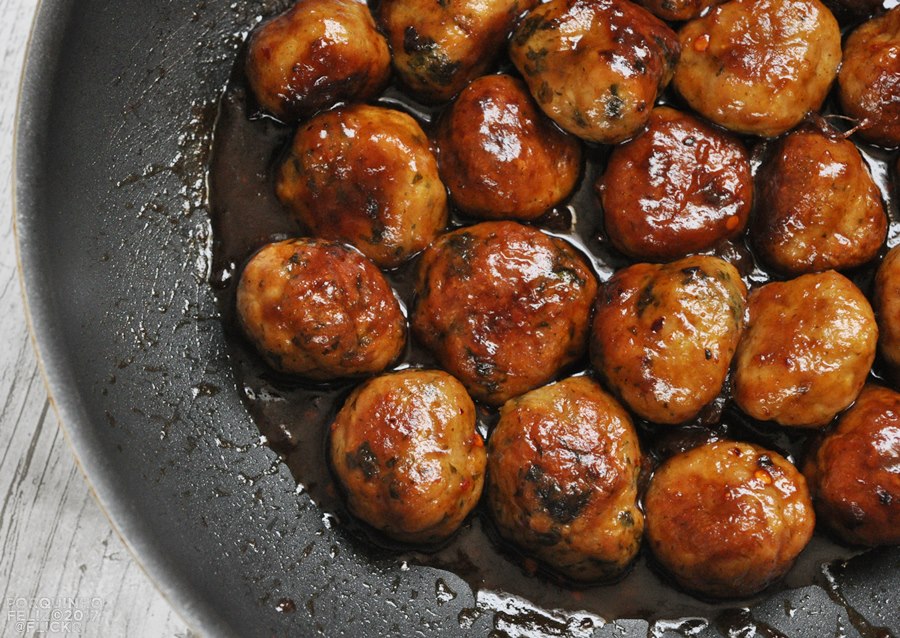 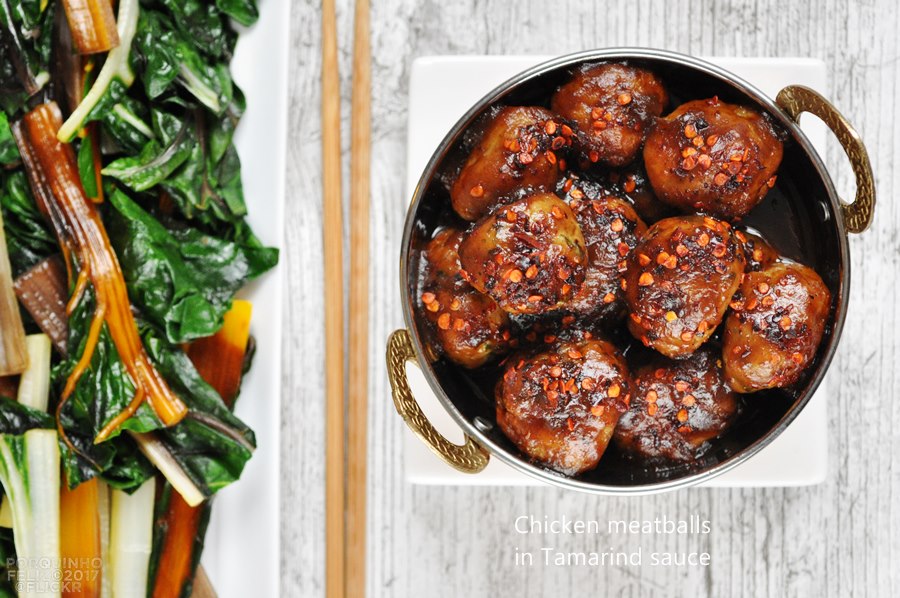 So pleased to see this here! I’ll be following, and hopefully adding later in the month.