The original recipe is from one of his childhood friend’s families; they were Goan. Of course, as with most things, it has been simplified by my mom over the years. And this was my approximation of her dish.

One of my favorite foods - coconut rice - is only made with two dishes in our family. This is one. Yum.

Also, roasted cauliflower. It was a good night - nice and caramelized, just the way I like it. 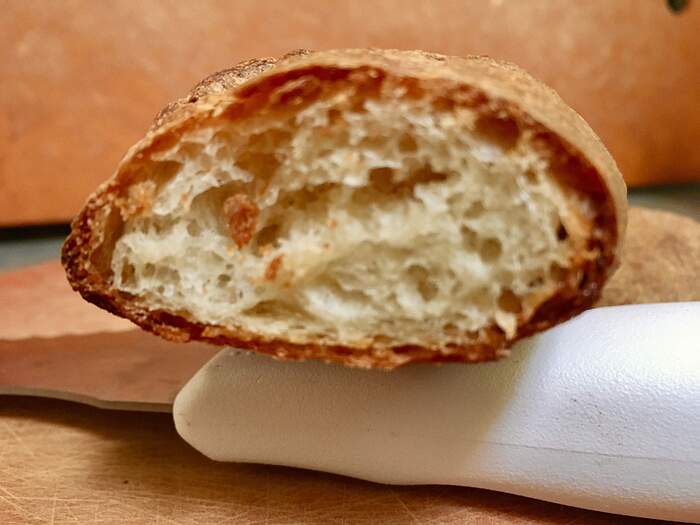 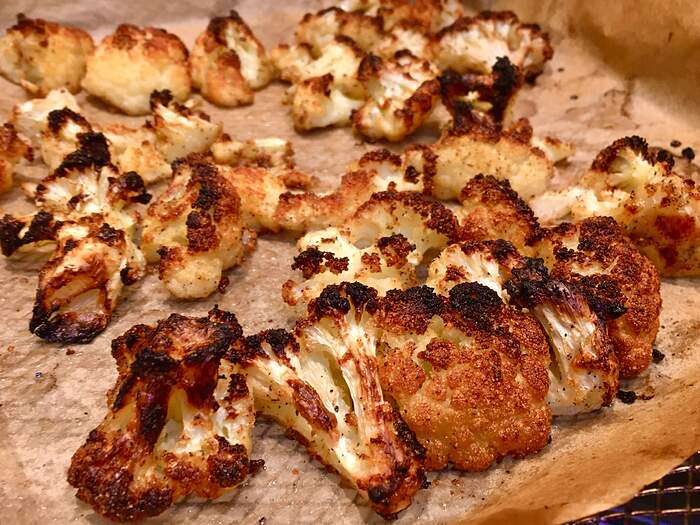 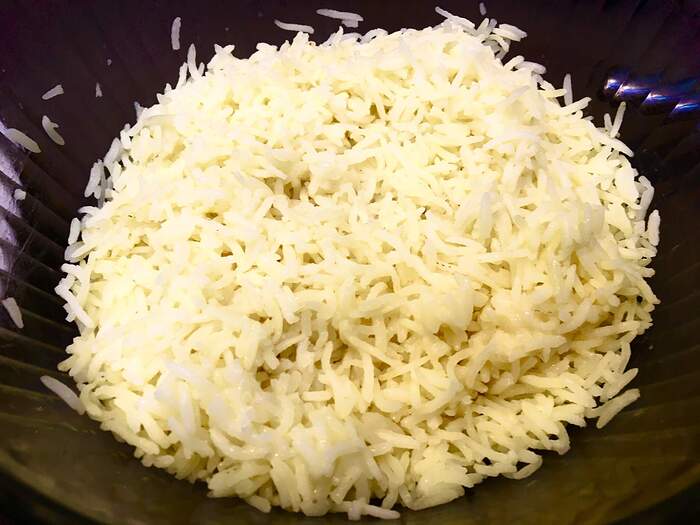 Just a regular store bought tortilla which I warmed directly on an open flame. But a hot buttered pan sounds even better!

I really need a stove upgrade!!!

You are motivating me to give it a try!!!

Trying to use up some stuff in the fridge, as I’m headed to central PA on Sunday with my sister for a couple of days. This worked.

Sauteed cremini mushrooms and onions until soft in butter and oil, adding minced garlic for the last 30 seconds before adding 1 cup of mushroom stock/broth from a mushroom bouillon cube. Let that simmer until reduced by 2/3rds or so, adding about a half tsp of dried thyme. Then added 1/3 cup heavy cream and sprinkled in some grated Parm-Reg and simmered until sauce was thickened.

Meanwhile, garganelli pasta was boiled and spooned out to drain, and I added some chopped asparagus to the boiling water for 4 minutes or so.

Pasta was returned to its pot, sauce poured over top and it was plated, with some of the asparagus on top with a sprinkle of Parm-Reg.

And it was good. Like REALLY good. These mushroom bouillon cubes are amazing for adding mushroomy umami flavor to meals. 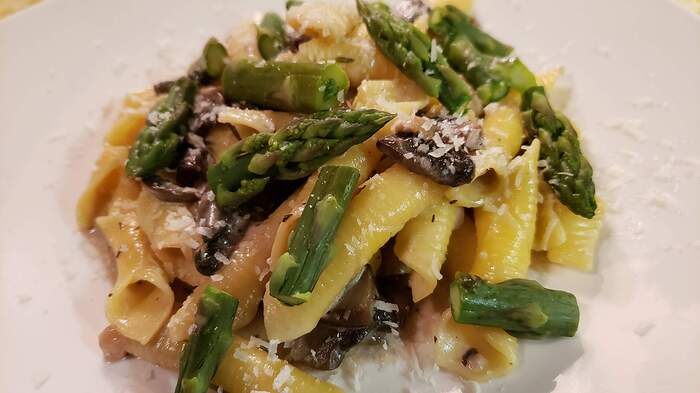 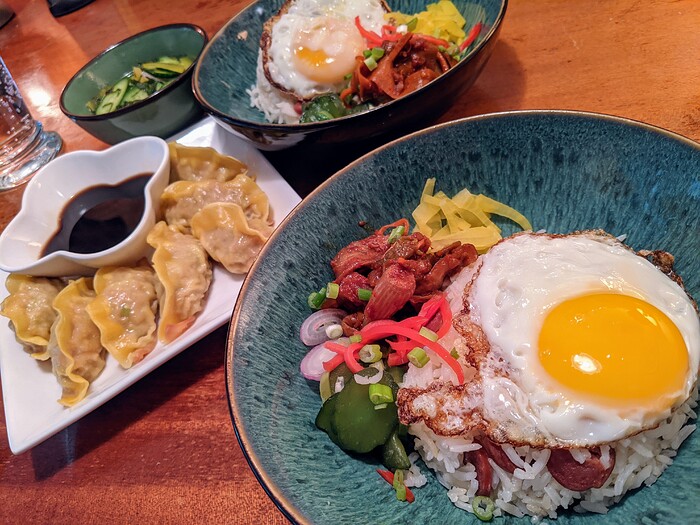 Total comfort food, as I’ve been dealing with some strange bacterial infection on my face. Face and eyes swole up like I’d been stung by a thousand bees. On antibiotics, starting to calm down finally a little this afternoon. No one is sure what caused it, doctors don’t think it’s an allergy reaction. I just want my face back. But I’m in no pain, and obviously, I still have my appetite.

I made arroz con pollo, inspired by recent posts here about that dish as well as paella

'Twas kismet. I was craving peas but I didn’t know what I wanted to do with them. Faux arroz con camarones, the arroz being cauliflower rice. I left it sort of brothy? and didn’t try for a soccarat. A green salad with v/o dressing. 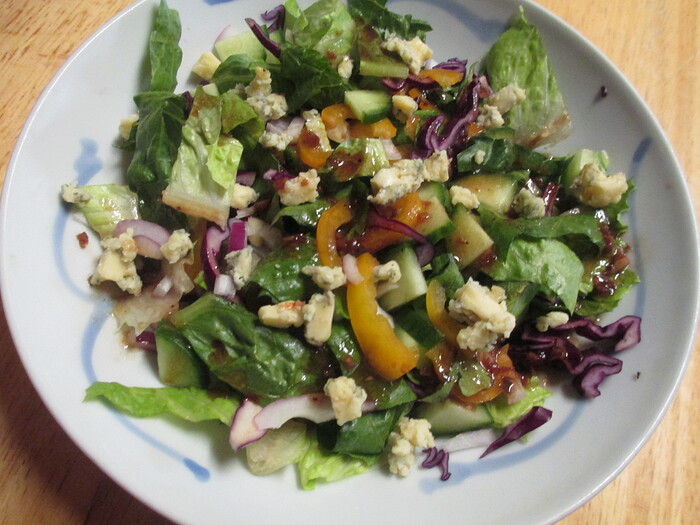 Wow, that doesn’t sound good. Great you still have your appetite as it all looks wonderful. Wishing you a speedy recovery.

Oh yum. Mushrooms and asparagus is one of my favorite combos. Enjoy your trip!

Haven’t gone with this in a while. Chicken cutlet over garlic mashed. Quick and easy comfort food. 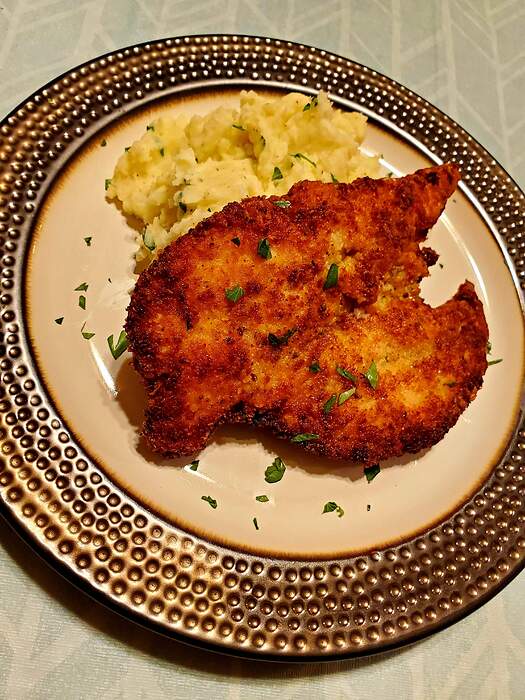 Started out making arayes, which have been on my to-make list for ages.

But the lebanese pita I was repurposing for this was too thin… I managed to open just one properly, so I used half the meat mixture for 4 quarters. 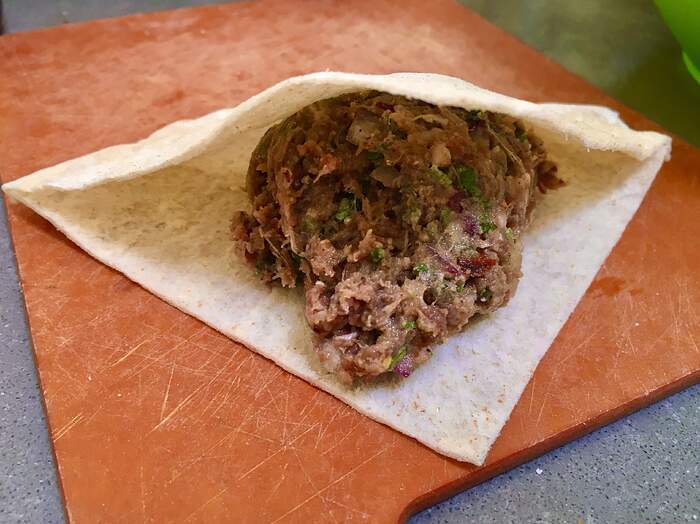 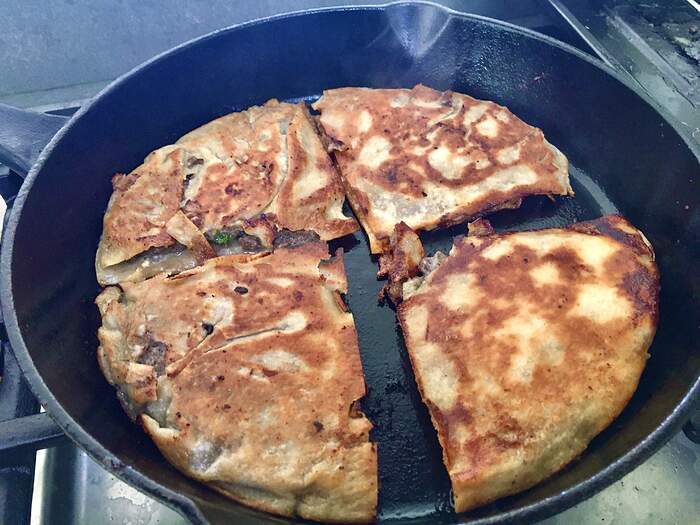 Decided to make the rest into sfeeha / fatayer - my favorite dish from the local lebanese restaurant here.

A quick yeast dough with one rise (I followed Ottolenghi’s dough recipe for these). The result was really quite wonderful.

The dough was different from the restaurant ones, though, which are quite flat and soft. These puffed up more and were crisper and firmer. I might try a different dough next time. 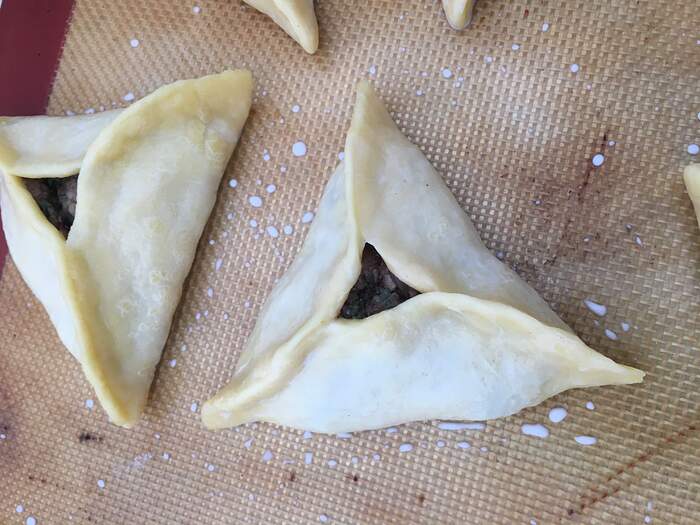 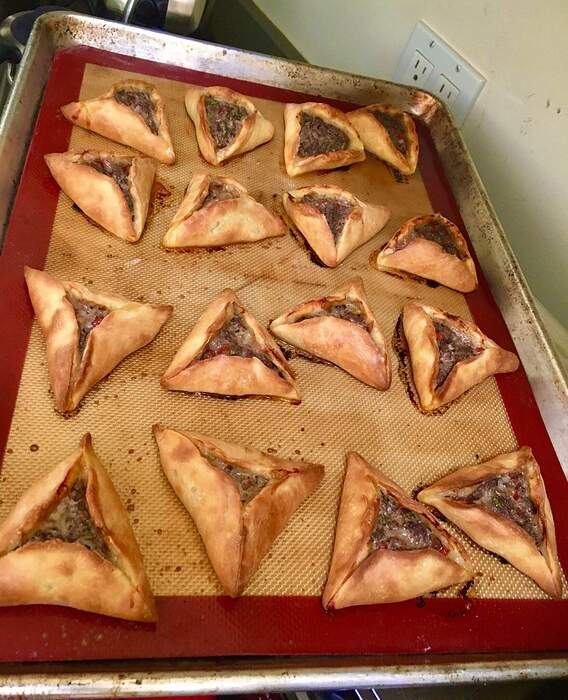 I made dinner for our friends who had a baby yesterday (we texted to invite them out, and they responded: “just had the baby an hour ago!” Fun surprise.) They’re vegetarian, so the meal was old-skool lentil tacos (filling done in the IP, naturally), smoky roasted cauliflower, crunchy and flour tortillas, all the fixin’s (sour cream, freshly shredded sharp cheddar and jack, tomatoes, lettuce, fresh salsa), homemade Mexican rice, and lactation brownies (basically added brewer’s yeast, an extra egg, almonds, oats, dark chocolate chunks, and almond butter to a good walnut brownie mix). And some tortilla chips and half a cinnamon-swirl loaf made by a neighbor.

We’re also having the lentils and rice ourselves as burritos tonight. 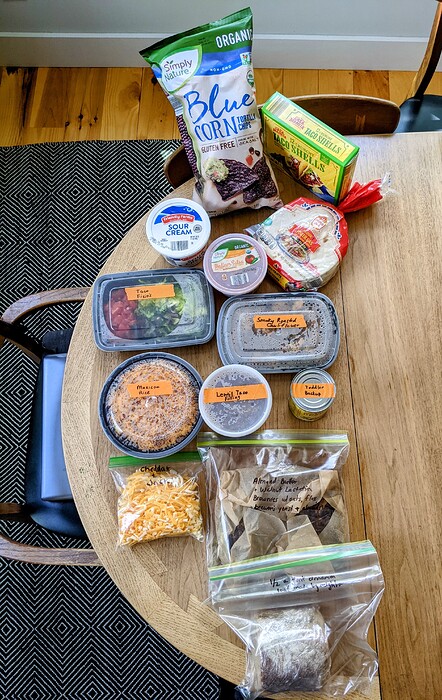 Just wow. All looks so delicious. 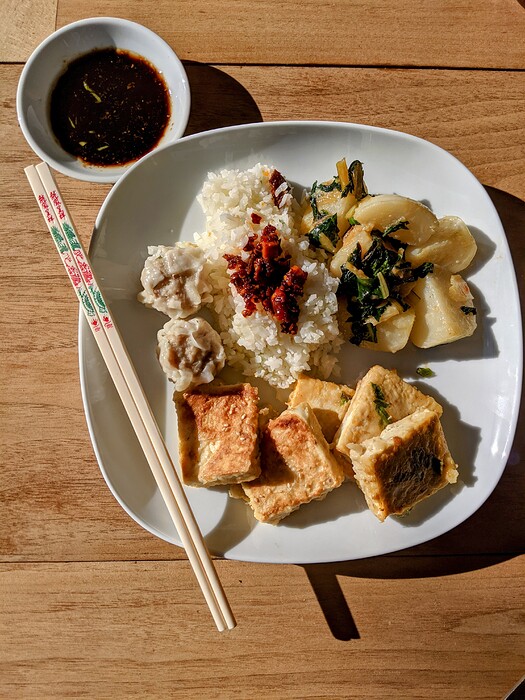 And these were tonight’s lentil, rice, and cheese burritos. Hit the spot. 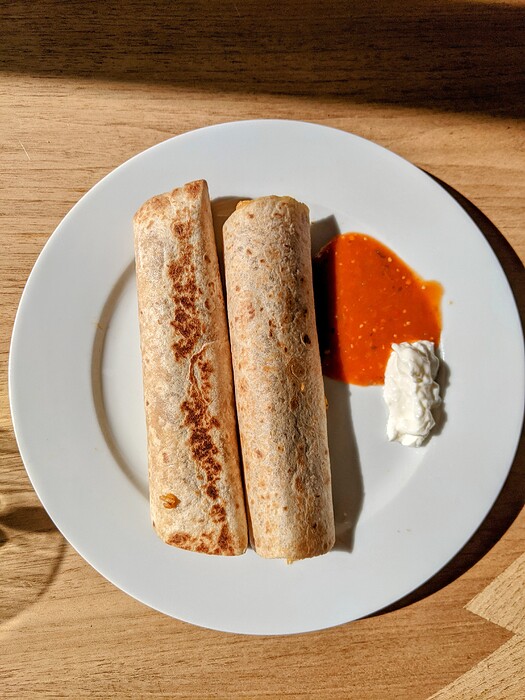 Bacon cheeeeeeezeburger drizzled with Worcestershire sauce before cooking to medium rare on a toasted brioche bun with caramelized onions on the bottom bun.

The lone side was Alexia garlic and pepper TOTS that I just found after a rearrangement of my upstairs freezer. And wine. So I’m dancing around the kitchen to 70s rock, sipping a Negroni, making Ina’s marinara sauce for chicken parm when I remember that chicken parm has mozzarella, of which I have none. Why is it called chicken parm if it has mozzarella? Oh well, I’ve already strayed, no red wine for the sauce so I used vermouth rosso. I’ll just wing it. Pounded and breaded chicken thighs with marinara sauce and parm. Sides asparagus and peas with sauce gribiche , salad of tomato, cukes, red onion, chiffonade of basil with balsamic, evoo dressing. 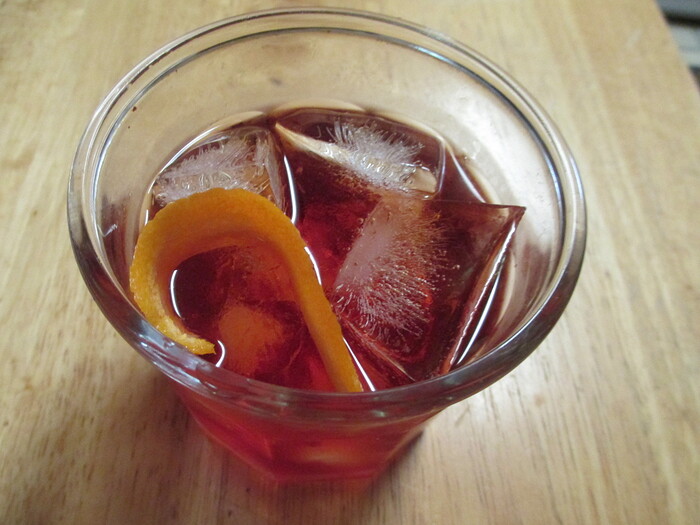 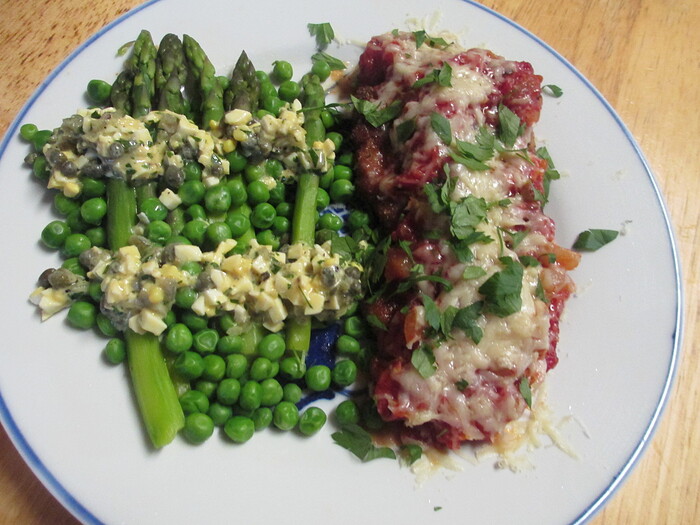 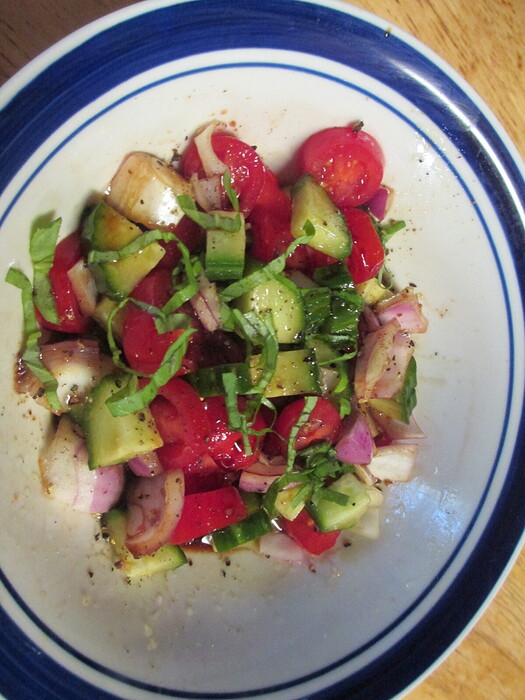