Here we are again - back to school time! Usually a parent’s favorite time of year, as depicted in the Staples commercial showing the mother and father sailing through an aisle on a shopping cart singing songs of hosanna (while the two grade school look very disgruntled at their parents’ joy).

Some kids are going back to their school full-time. (Hopefully safely.)
But some kids will continue learning at home. (Parents weep)
And some kids will be going to school at both home and back at school for a few days a week - a hybrid model.

No matter what, the grade school munchkins and (hopefully not!) sullen teenagers will still need sustenance, which means Mom’s and Dad’s work isn’t done when they are done with their workday - dinner still needs to go on the table.

Mo Weber stepped up for me yet again…

Chicken Kebobs from Mario’s Meats in Eastpointe, MI. The kebobs are marinated over night at the shop before going into the meat case for sale. Nothing needs be added. 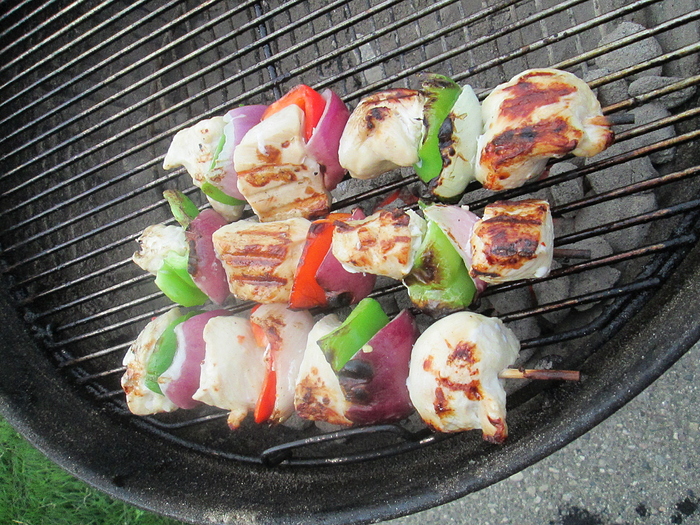 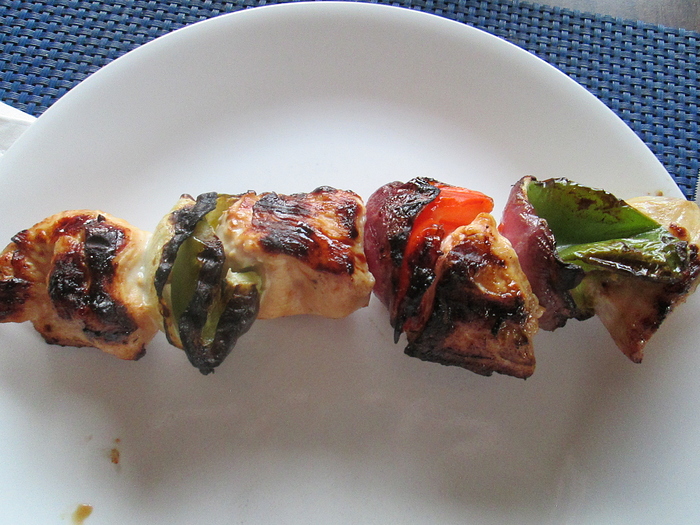 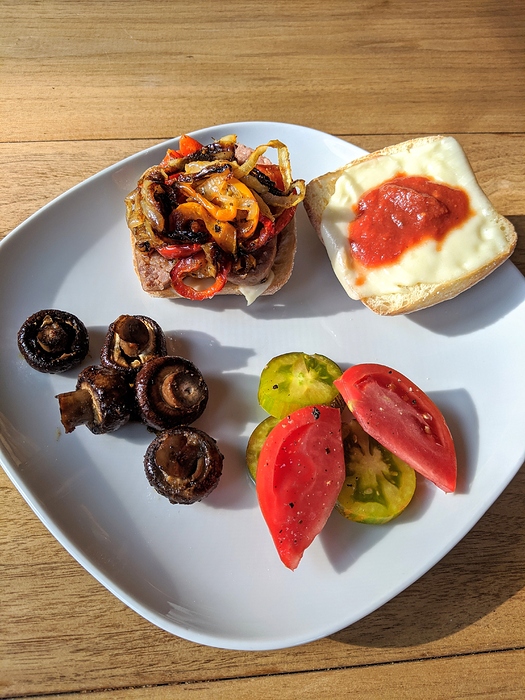 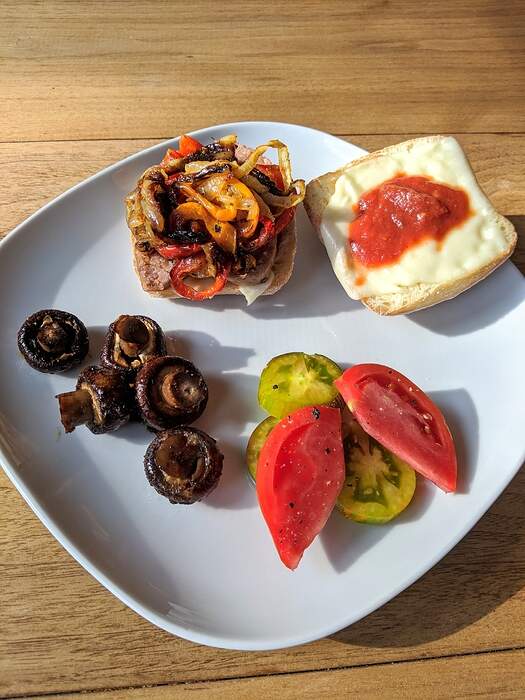 Simple. And o so eye appealing! 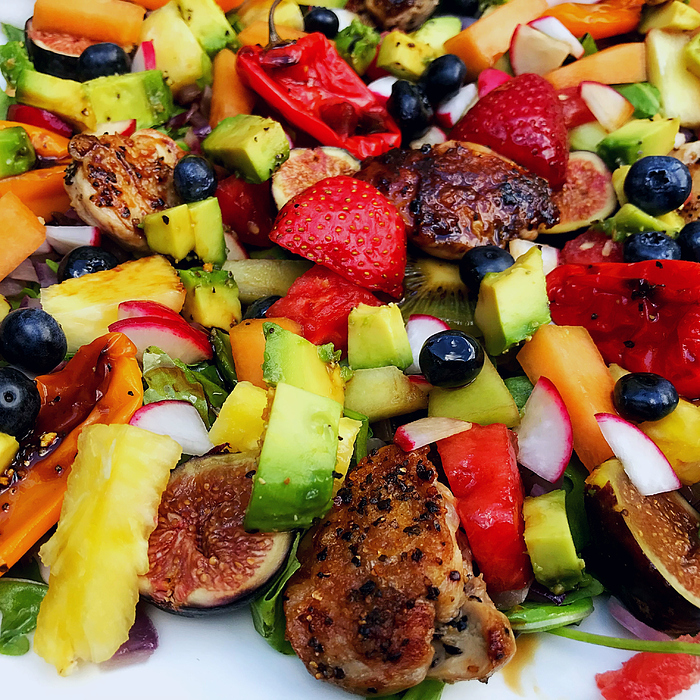 Roasted ratatouille tonight, with tangy Greek yogurt for protein and Portuguese home style bread for soaking up the juices.

A hot oven and good olive oil did the heavy lifting. See before and after. 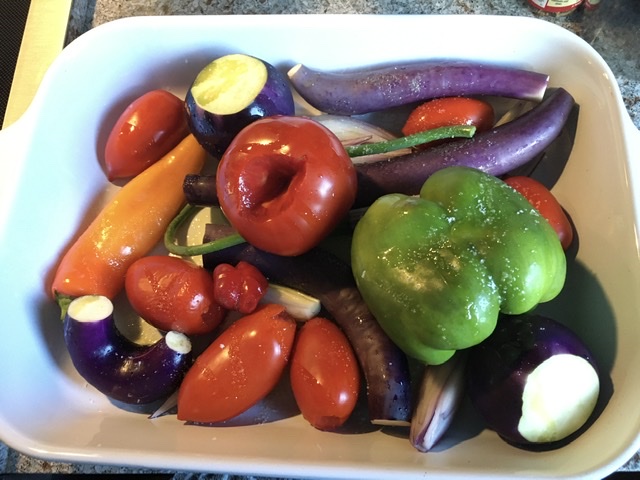 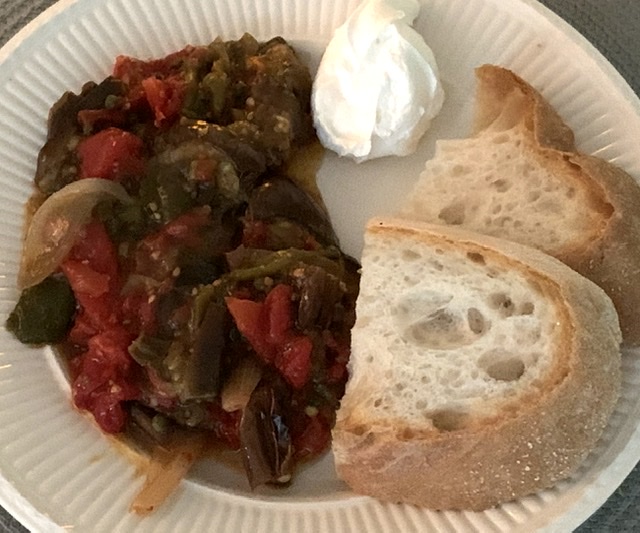 Chicken rendang with cinnamon and star anise, following a recipe from Cradle of Flavor by James Oseland, recipe can also be found at https://www.nytimes.com/2006/10/01/magazine/01food.html

I used a mortar and pestle rather than a food processor for the paste. Next time I will grind up the harder and more fibrous components such as the galangal and lemongrass first. It came out pretty good, even if the skin was not crispy. Served with plain white rice and a simple salad. 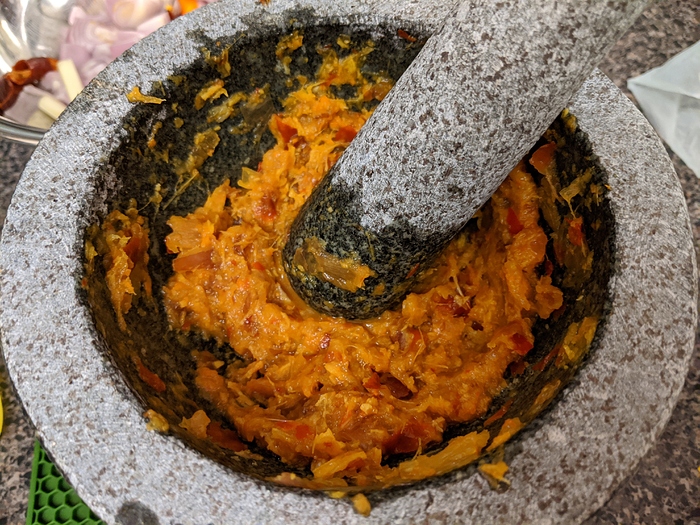 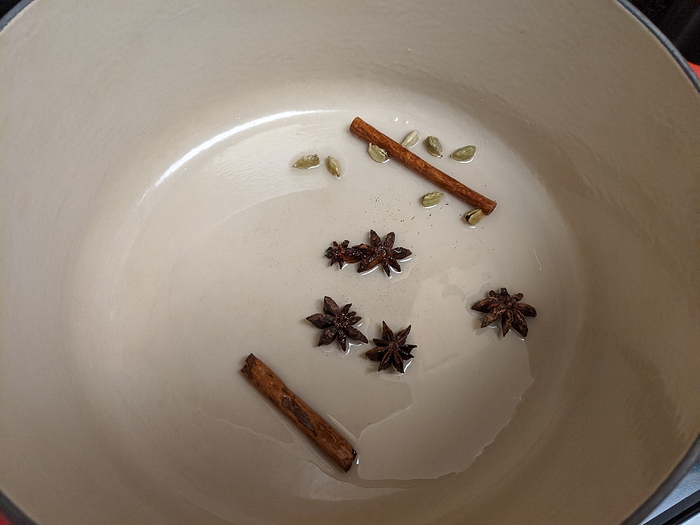 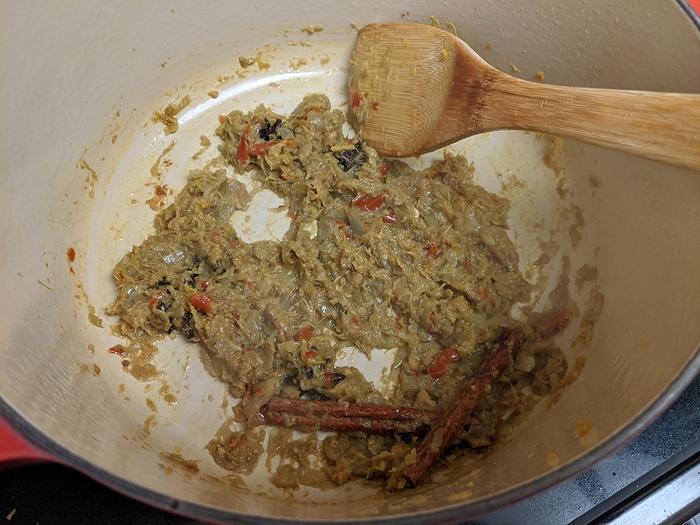 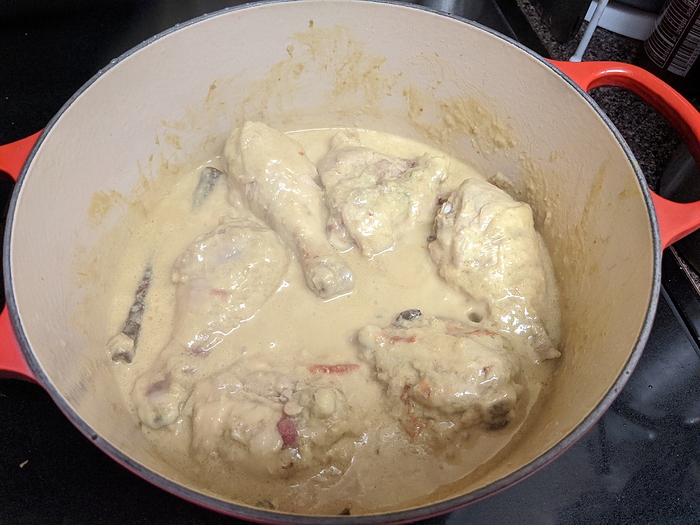 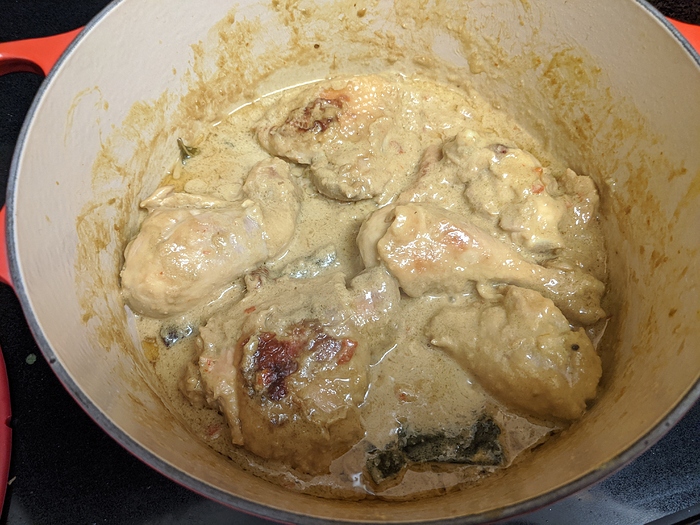 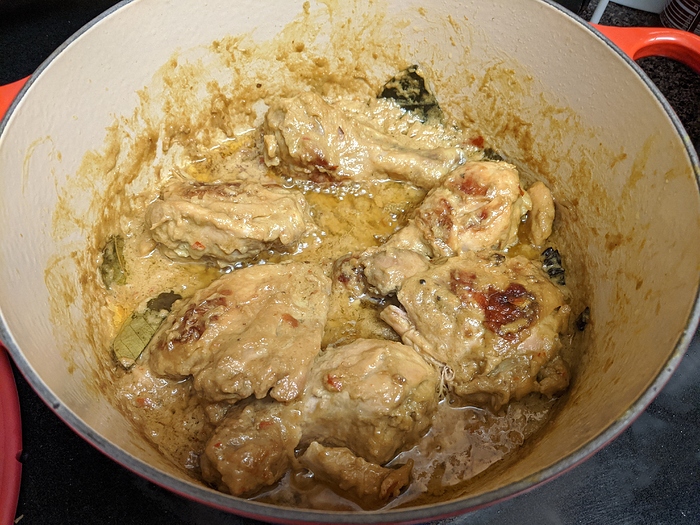 Calendar said it was time for tacos - shredded pork from the freezer and a tub of enchilada sauce I made a couple months ago. homemade guac and chips and and a not-very-enticing looking roasted salsa that tasted way better than it looked. 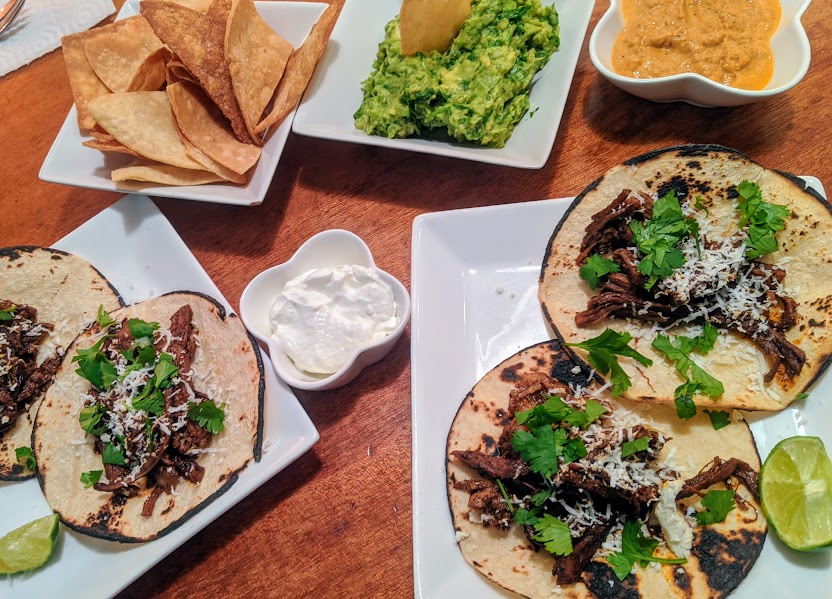 It came out pretty good, even if the skin was not crispy.

I remember this controversy

Thanks @LindaWhit for starting the thread!

Tonight was a lazy dinner (on my part and overall.

Tonight I suggested Viet summer rolls for them, which were a hit other than the diet quantity.

I was out in the garden giving some of the tomato plants a military haircut to take off dead and diseased leaves, which took a lot longer than I wanted - and I’m only half done.

After pork-a-palooza we are on to brisket-palooza. The trial piece had been cooked sous vide and was sitting in the fridge, so I suggested we eat that - it was smoked to finish while I was conducting tomato plant spa.

I sautéed a bag of frozen spinach with onions, garlic, chilli flakes, and tomatoes - did you think this was going to be a tomato-free meal? HA! Homemade bread from the freezer, grilled. And the smoked brisket.

@Saregama! You git those bad tomato leaves! I’m right behind you.

I’m wearing white at least once more. But not with gazpacho on the menu. This might be one of the last batches. My tomatoes are toasted. No one has mentioned adult children coming home to (hopefully not sullen) parents!

We are getting delivary at the door from unknown local restos, and I know ALL the local restos! It is 15 minutes from one end of town to the other, WITH traffic! She must think this is Queens.

Surprise! Chicken thighs! Yay! Husband knows all the places that serve thighs, and avoids them. They both looked away as i enjoyed the skin. But also mapo tofu, which she enjoyed, and I’ve never tried.

This will be fun. Mostly.

“NW Pacific Grilled salmon” or something like that…yet again. The flag is for mercy. “Take me out!” of the broiler they cried. Husband’s got no mercy and stayed in the broiler.

Dreaded (by now) tomatoes on the side. 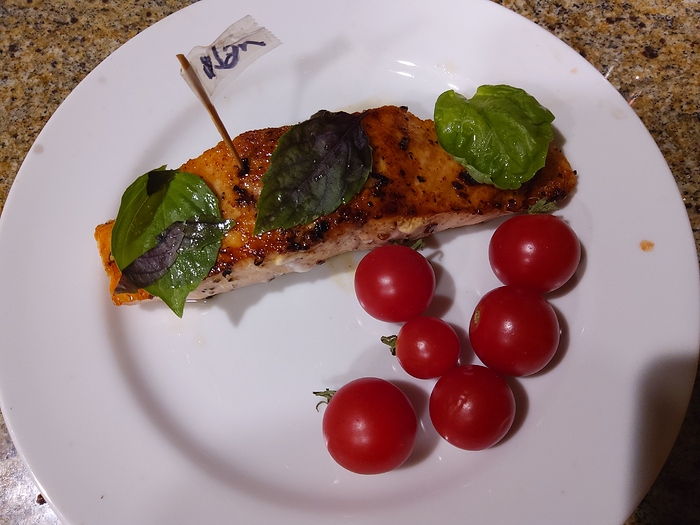 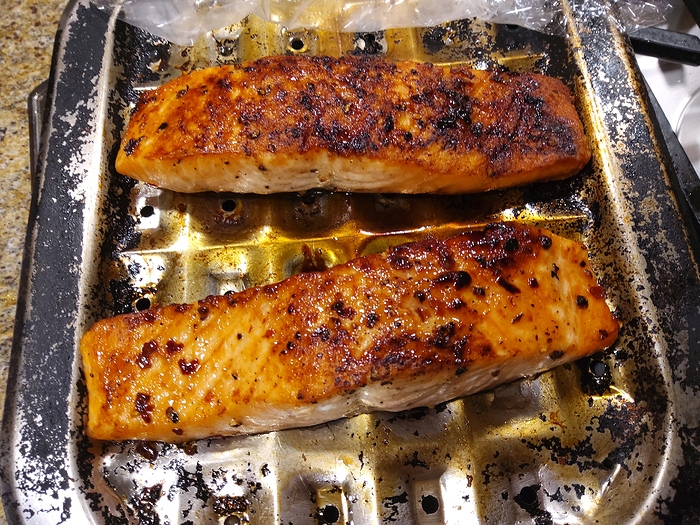 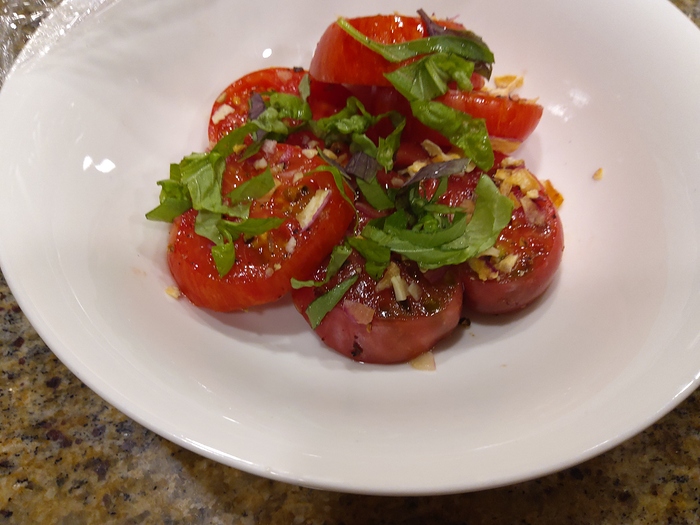 Yes @retrospek, wonderful comfort food. We put peas, a little celery for crunch, green onions, and pearl onions too. We were out of potato chips, so we topped it with French’s fried onions. It was really good, plus leftovers for lunch tomorrow. And yes, really no salad needed!

And this weeks gazpacho. This has to be one of the most beautiful chopped salads of all time. We’ll trust you on the deliciousness.

This has to be one of the most beautiful chopped salads of all time. We’ll trust you on the deliciousness.

Yes, it was delicious and almost too pretty to eat.

Made the Cauliflower, plum, yogurt salad from Six Seasons.

We enjoyed this a lot. I needed more sesame seeds, but my bottle was almost done so, next time. Hot dog on a sad little crushed bun dug out of the freezer. A little mustard and sauerkraut on top. 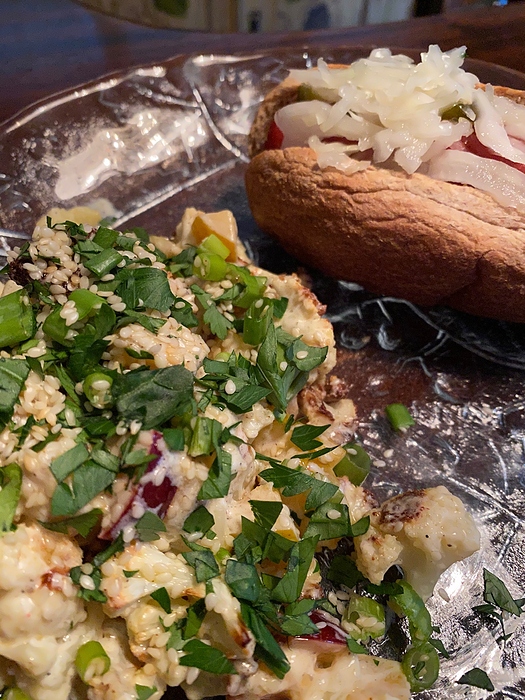 Long day today, too tired to cook, pizzas delivery.
Last night, cat went out as usual to take his night walk, he didn’t came back home to sleep like he usually did (he was never an overnight outdoor cat). Both of us did a few rounds of night searches, nothing. Woke up this morning, still no cat. More rounds of searches, and I started to ask around neighbours. At midday, he presented himself at the door, with wounds in all his paws, he lost nearly all his claws. Brought him to the vet later this evening, since he refused to eat or drink or even to sleep in the afternoon. Some shots and cleaning, he was suddenly alive, and started to eat. He is now forbidden to go out at least for 5 days. Happy ending! Damned cat, next time he won’t be this lucky! 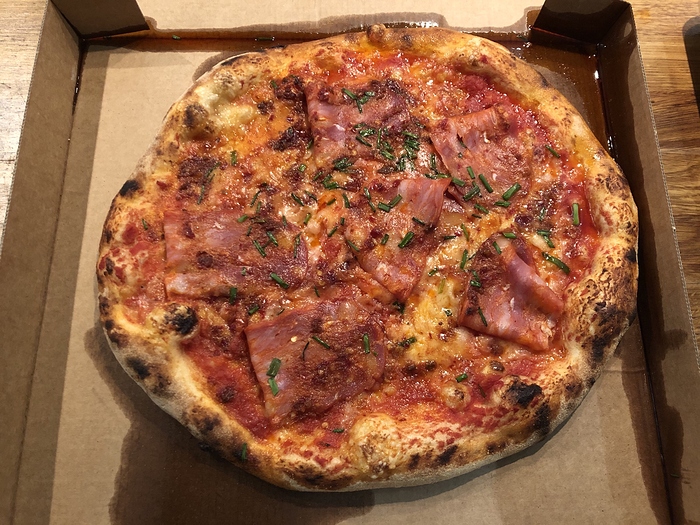 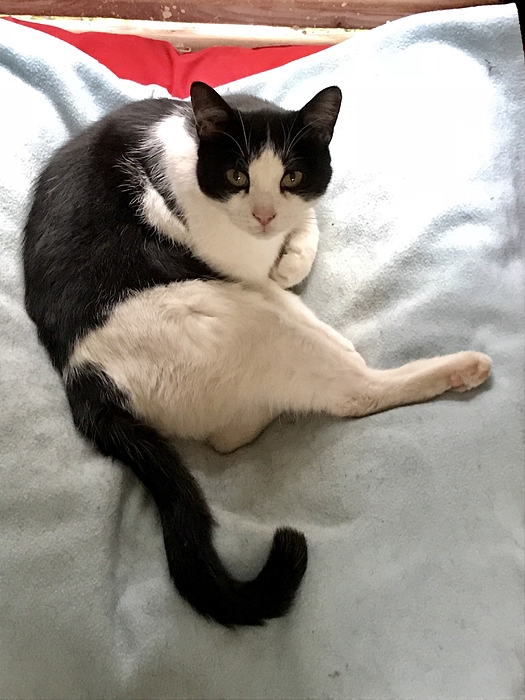