I love spring onion’s interest in animals (thinking of that caterpillar photo as well)! Really delightful, as is the whole fish. I haven’t done one in a long time but I do see Whole Foods has them on sale from time to time. This week halibut is on sale. 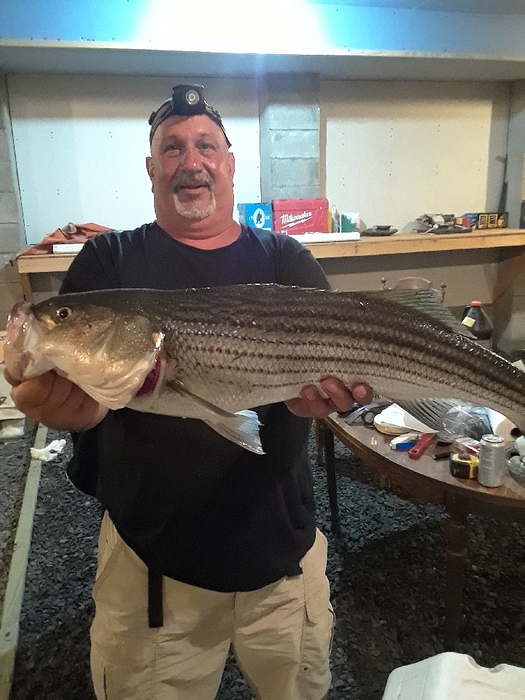 W.O.W. That’s almost enough for all of us on this thread

Oh, lord, the Impossible Pies! They were limited only by Biscuik’s and our imagination. Pizza IP. Tamale IP. Take your favorite savory flavors, add Biscuik and milk, cover with cheese and bake! That was an era!

Started a new batch of kimchi the other day! My stuffing skills leave a lot to be desired but whatever. Also the daikon didn’t look good so i used regular radishes- pic was before i added the brine 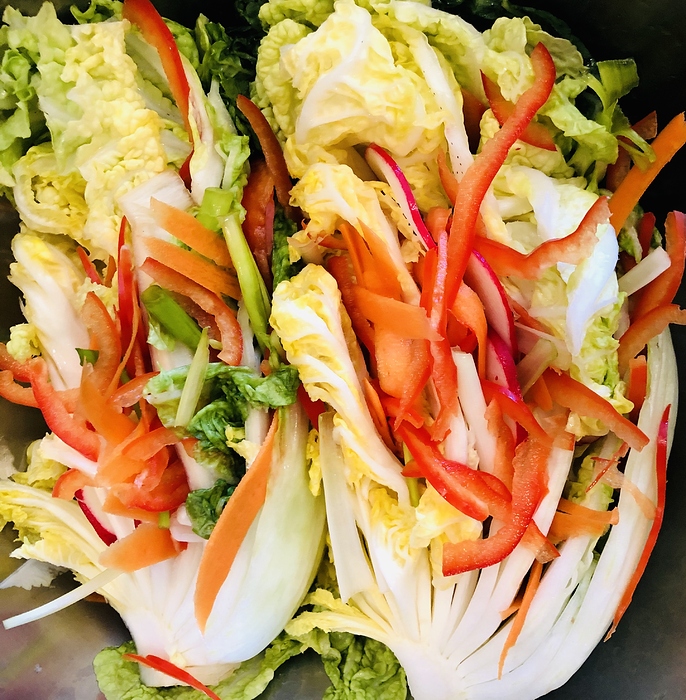 Salad of All the Things with some of the extra radishes, lots of pumpkin seeds, olives, and butter lettuce 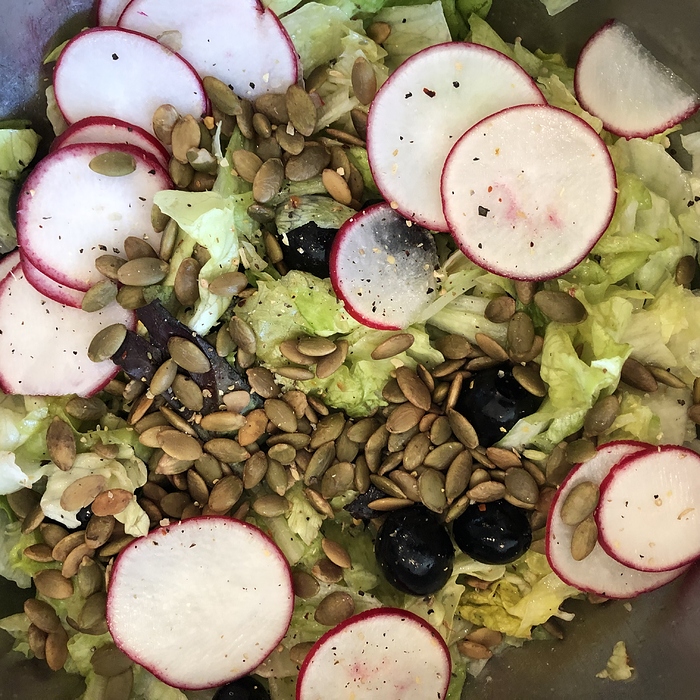 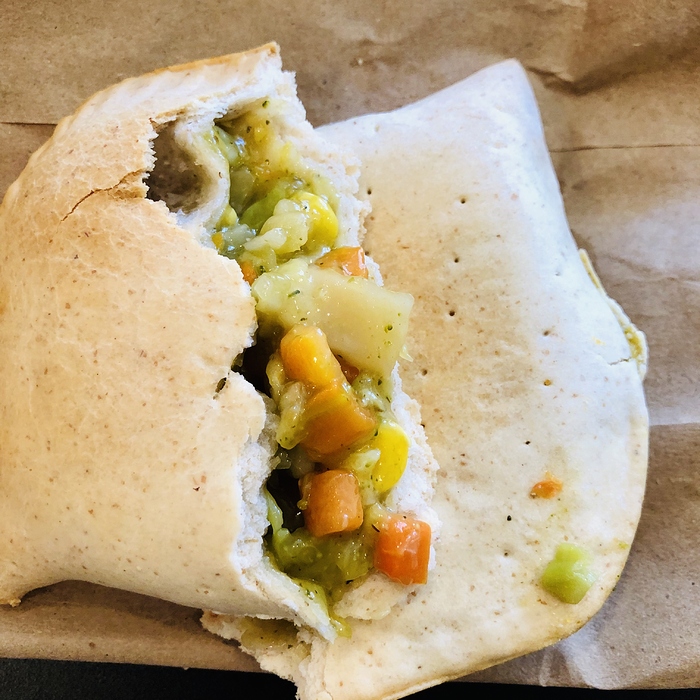 Dinner was salvaging last night’s shockingly dismal meal at a favorite place. I didn’t know it was possible to have too much lemongrass in something, or a dish salted to the point of being almost inedible.

I turned the sauce into a dressing with larb in mind, for a big salad of butter lettuce, fennel quick-pickled in the dressing, and pickled onions from an earlier pickled deviled egg experiment.

Topped with the rest of the leftovers - field peas, Brussels sprouts, and Chiang mai style sausage.

Actually quite a tasty meal, in stark contrast to the original!
. 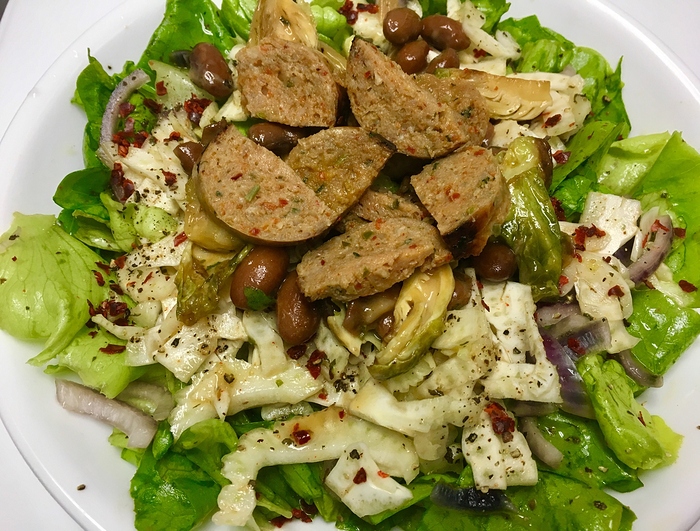 Salad , with grilled chicken and bread. Wine to drink. Cheers. 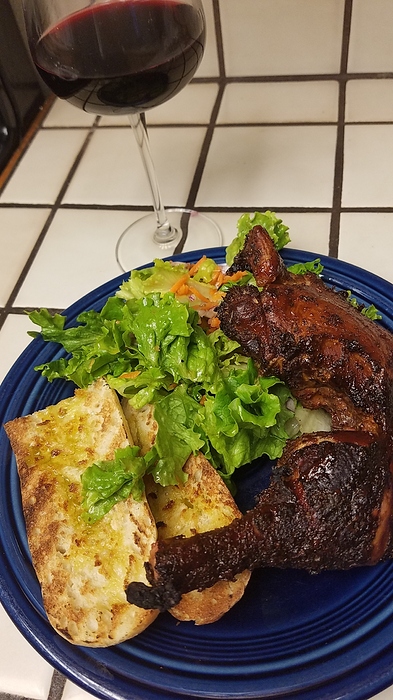 Needed to us up some frig items including half a sheet of puff left over from the weekend. Lined the pastry with provolone, a few straggling slices of turkey pepperoni, and a mixture of sautéed leeks and chard. A bottle of Cab Franc on the side. 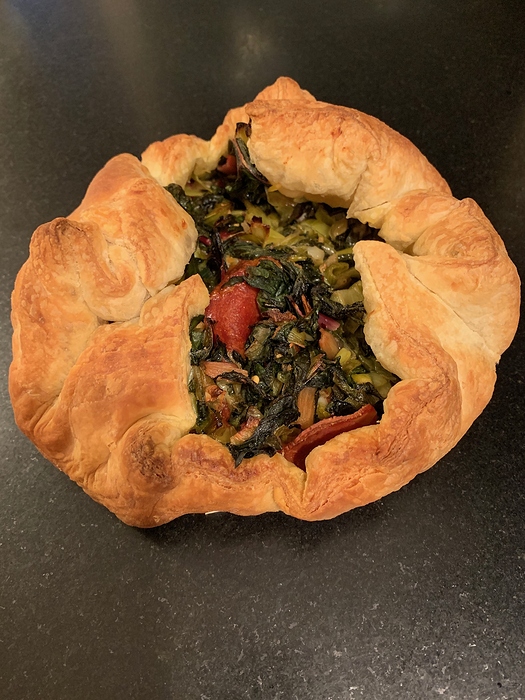 Is that a fish in your hand or are you just happy to see us?
You mention deep fried…anything special?

That said, I do think for myself anyway that my palate and appetite has changed too.

I think you’re probably right on the first count. I grew up in a time when few Britons travelled overseas for holidays - they’d be the relatively wealthy (which didnt include my family). It was really only in the 60s/ 70s that we started to be really exposed to “foreign” foods, as we travelled. That was also the time when there was significant asian immigration to the UK - both east asians (mainly through Hong Kong) and south asians (mainly Pakistanis). Both groups opened food outlets, as is the tendency of all immigrant groups.

I also agree with you that my personal tastes have changed. Born in 1950, my first years of eating were still in the time of postwar food rationing. That only added constraints on what, on reflection, was Mum’s limited cooking horizons. It’s probably fair to say that, at the time, “good food” in the UK was only “good” if it was French. That had changed by the 1970s and I started to enjoy other foreign foods, often quite highly spiced - that was a period when Britons really only went to an Indian restaurant, after the pubs had closed and you’d had much to much to drink.

However, my tastes have again changed in line with the developments in restaurants and in home cooking. I now have much more enjoyment about local seasonal produce and dishes with their roots in tradition. I’m sure that’s due to the “Modern British” chefs like Gary Rhodes who pioneered the new style of cooking.

Actually quite a tasty meal, in stark contrast to the original

I LOVE that you didn’t toss the food and turned the leftovers into something nice!

I was wondering if that would resonate with any others.

I love spring onion’s interest in animals (thinking of that caterpillar photo as well)!

This week halibut is on sale.

Licking my wounds after the Bruins’ loss last night in Stanley Cup Game 7…Funny how I always find solace here on HO.

Spring onion grew up going to our local farm which is 5 minute bike ride down the street. We threw him a 4.5 year birthday party this past weekend at another local farm (Chip-In in Bedford for those Onions in the Boston area). Needless to say, he loves farms and going to the farm stand. Whether he eats the vegetables from the farm stand that’s another story.

I purchased a bunch of halibut from WF yesterday when I saw the sale. We threw it on the grill and ate it atop giant macaroni shells, dotted liberally with freshly made basil pesto. Side of broccolini sautéed with garlic and lemons. And as usual, I forgot to take a photo. But it was really good.

Last night I made variations on Fuchsia Dunlop’s cumin beef, sweet and sour zucchini with carrots, and dry-fried green beans with ya cai. All served over cauli-brown rice. 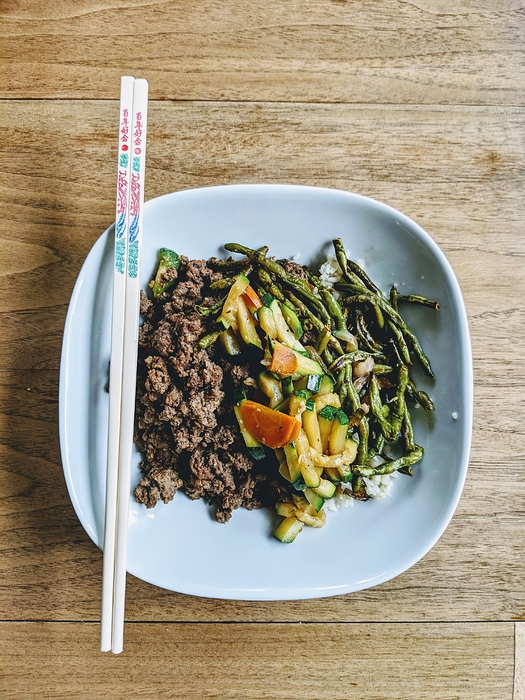