Dinner was steak tips, grilled simply with oil, salt, and pepper, and drizzled with Ballymaloe steak sauce. There was a baked tater with the PSTOB and sour cream, and steamed asparagus. And wine. 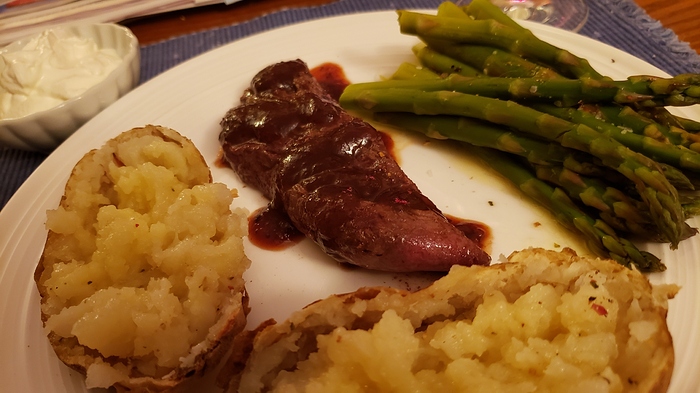 And the boyz had their first Open Window Day. 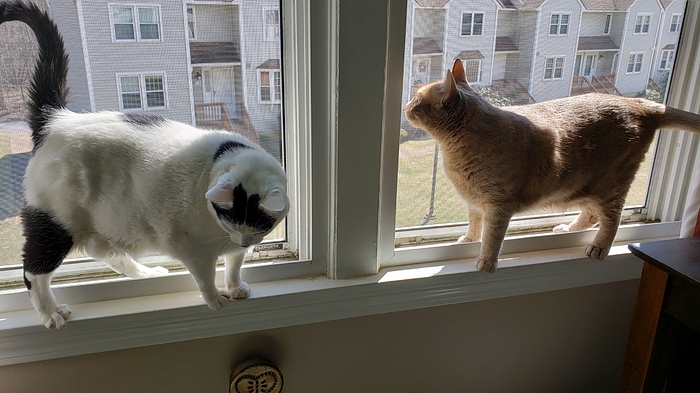 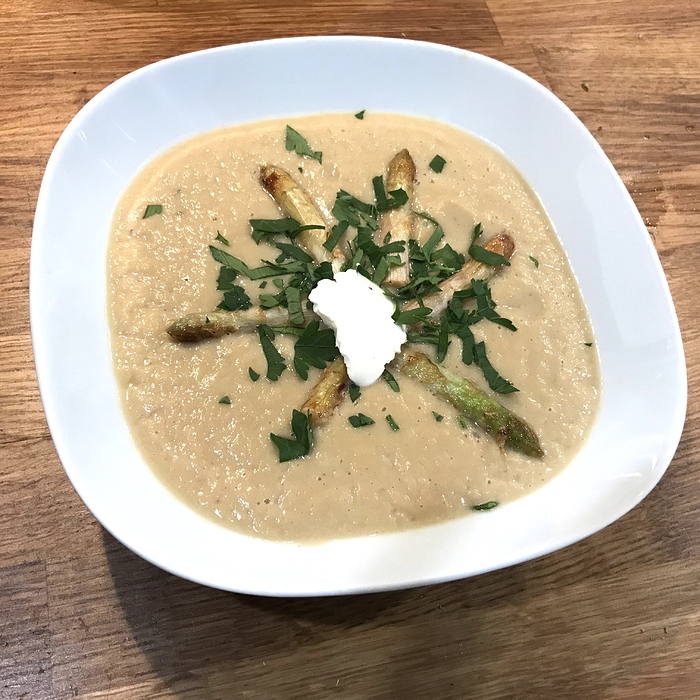 Duck breast, cooked on stove and finished in oven. The cooking was as desired, except the meat was still on the tough side. Blame the duck! 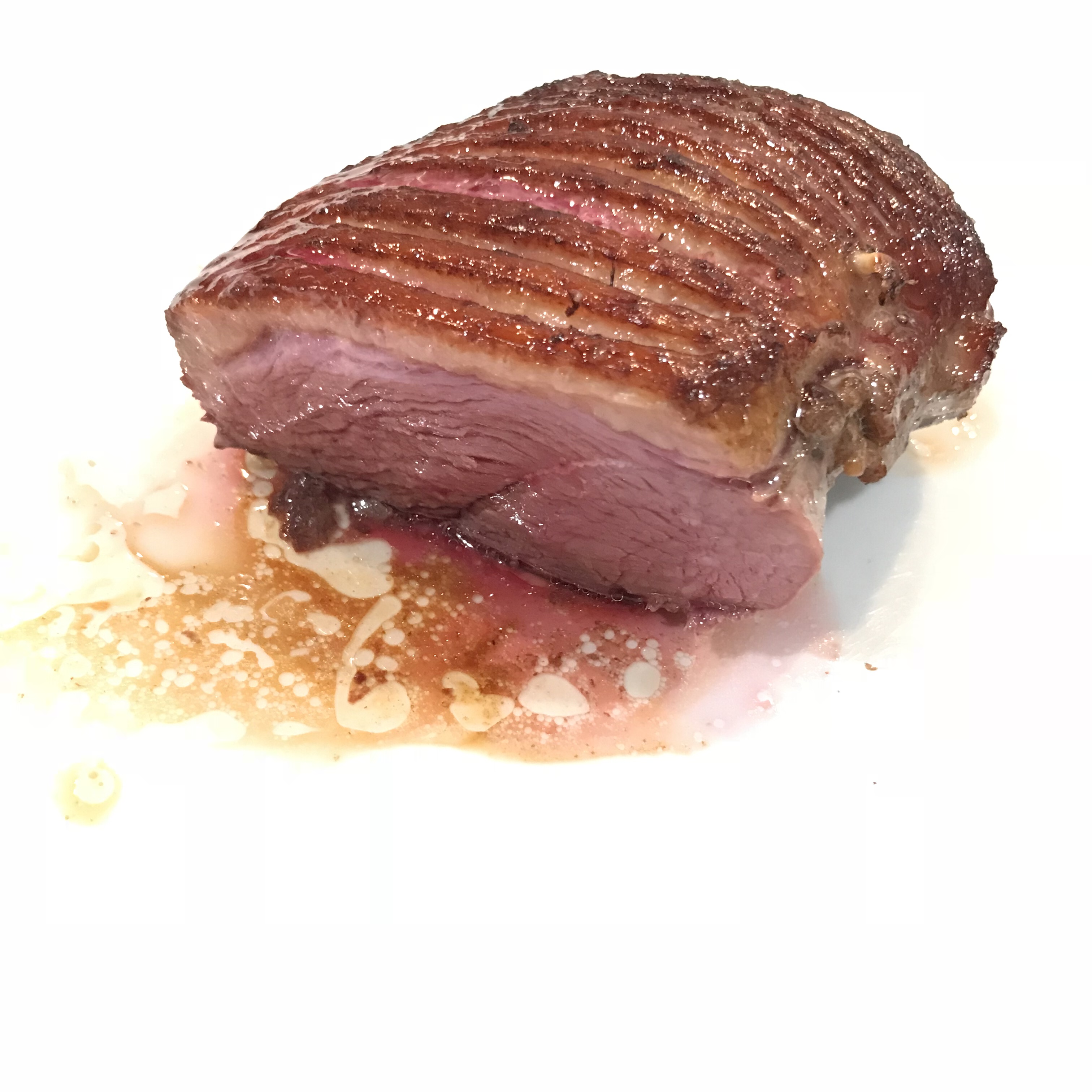 A dear friend came over for dinner last night. She had cheffed up a great Carbonara dinner for us last week, so we reciprocated with Chinese.

Spare Ribs and Conch with Chinese Herbs soup. I’d added 3# of Pork Bones, and simmered on the stove for over 6 hours. Very rich and flavorful, did not need any salt or seasonings whatsoever. (I’d fished out the ribs at the 2nd hour, otherwise there would not have been any meat left on the bones to gnaw on) 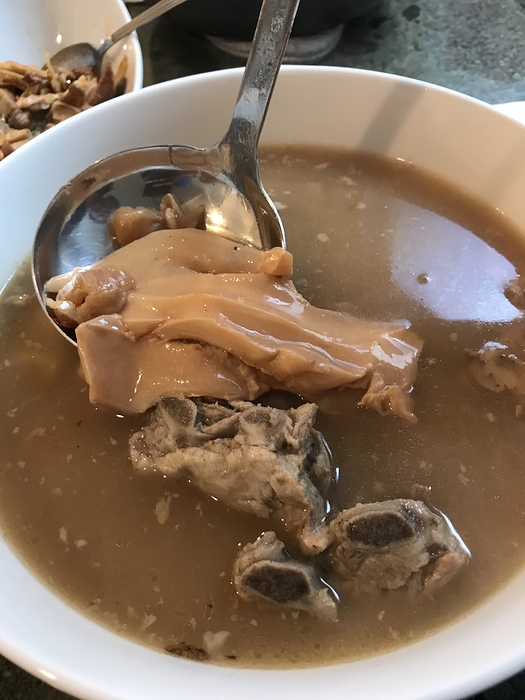 Our favorite cut of Pork, Toro (Neck meat). Stir fried with Shitake and Bamboo. Toro is great in every prep that we’ve tried so far. Bamboo is an especially nice textural foil for the meat. 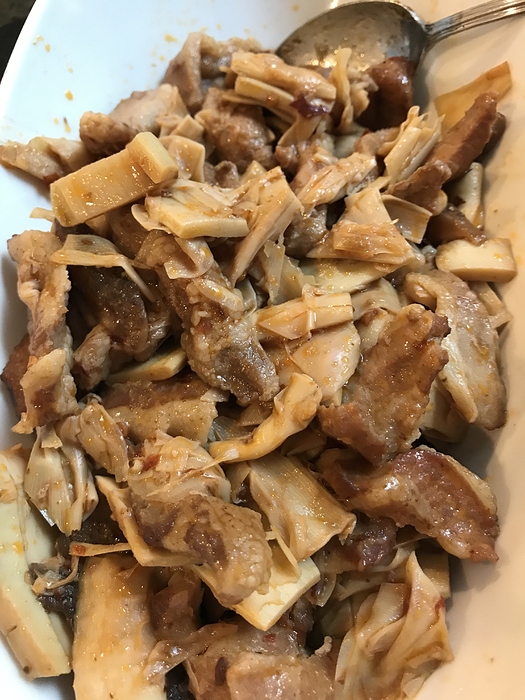 Frog stir fried, marinated with soy, Shaoxing wine, minced garlic and ginger. Yes, the entire frog. At least it was skinned, unlike the froggies we had in Taiwan. 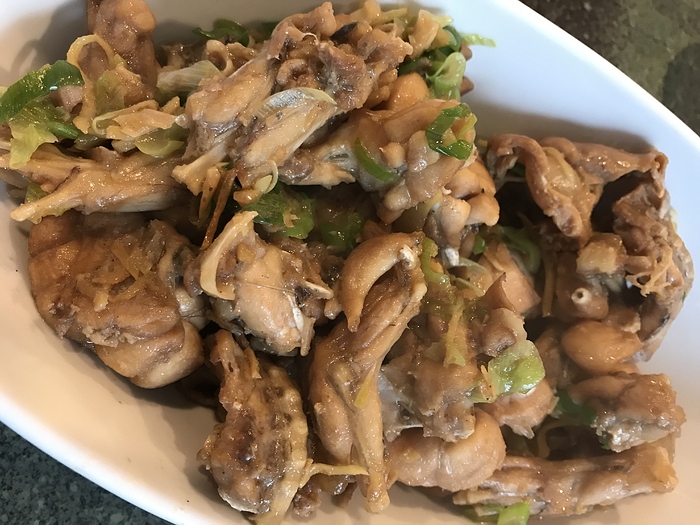 Braised Striped Bass with Tofu. Thanks to my fishing buddy! 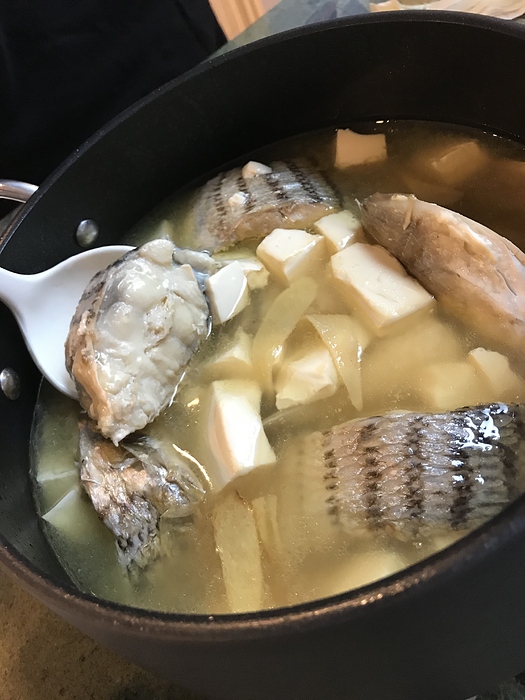 We had brought back some beautiful dried Shrimp from Hong Kong. Superb with the Baby Shanghai Bok Choy. 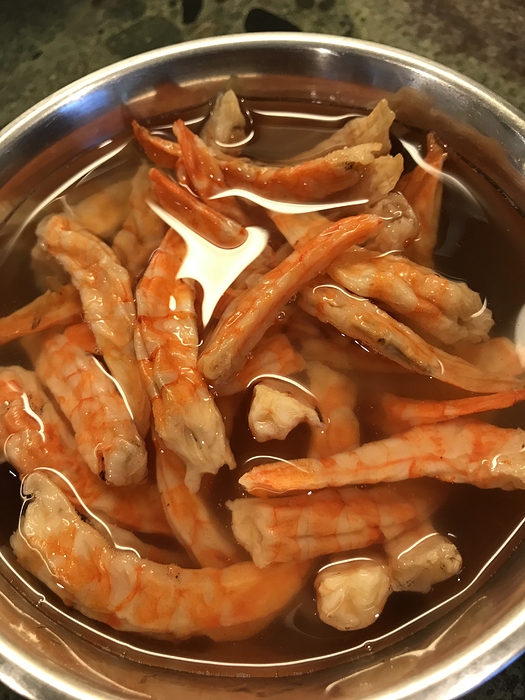 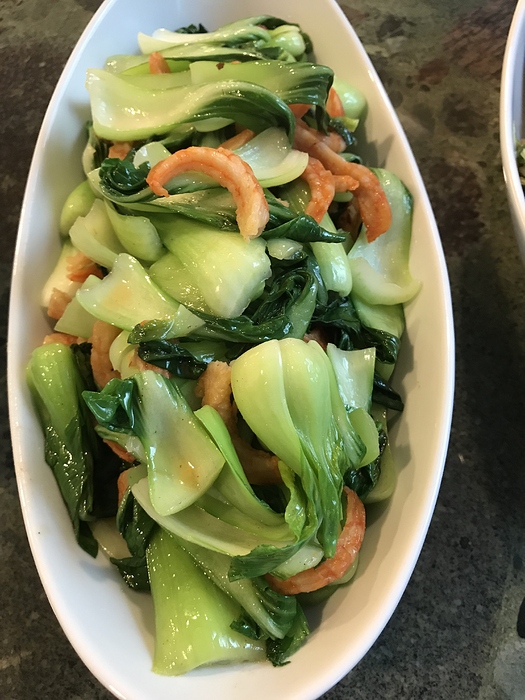 Yes, there was wine. Cheap boxed wine (our friend only drinks Bombay anyway). And, Mr. Cuervo and Bombay were invited to the party.

Soup looks Yum!
I would have that duck on a onion roll with no problem!!!

Costco had a great deal on boneless leg of lamb recently, so I have had a couple sitting in the fridge for a while. Tonight I cut half of one into paper thin slices for cumin lamb tonight and ground up the other half with mint, coriander, onions, garlic, fennel seed and black pepper for kofta kebabs tomorrow.

Cumin lamb was a hit for me but too spicy for DH. I marinated the meat in soy sauce, sambal oelek, dry sherry and a little cornstarch, then quickly stir fried it with baby leeks and loads of chopped garlic and ginger, cumin and red pepper flakes for heat. Finished the sauce with a bit more sherry and some chicken broth and served over charred broccoli. Delicious.

We had another superb dinner at Cafe Panache in Ramsey, NJ. Below is a link to the details and mouth watering pictures.

We had another superb dinner at Cafe Panache Saturday night. We started off with very flavorful and spicy curried mussels imported from Holland with Thai lemon grass. Below is a split portion. We also had amazing green and white asparagus, which is just coming in season. Below is a split portion. For entrees I had a beautifully charred pan seared prime black angus sirloin steak with cognac peppercorn sauce, that was medium rare in the center. Mrs. P had a crispy tempura battered soft shell crab …

Duck breast, cooked on stove and finished in oven. The cooking was as desired, except the meat was still on the tough side. Blame the duck!

One of the “hanging duck” restaurants in SF Chinatown has a daily takeaway special in the late afternoon. Most of what they have left over in the window, they chop up, plate it and sell for $2.30 a plate, or $6.50 for 3. We frequent this place often. Nice to get a little extra something for a couple of bucks, when we don’t really need a larger portion.

Today, they had a couple of treats that we had not seen before. Pork Tongue, and Duck Breast. They always had duck, but never only the breast. We bought a double portion of tongue, with one of breast. The duck is nowhere near as delicious looking as NAF’s, but hey, $2.30? 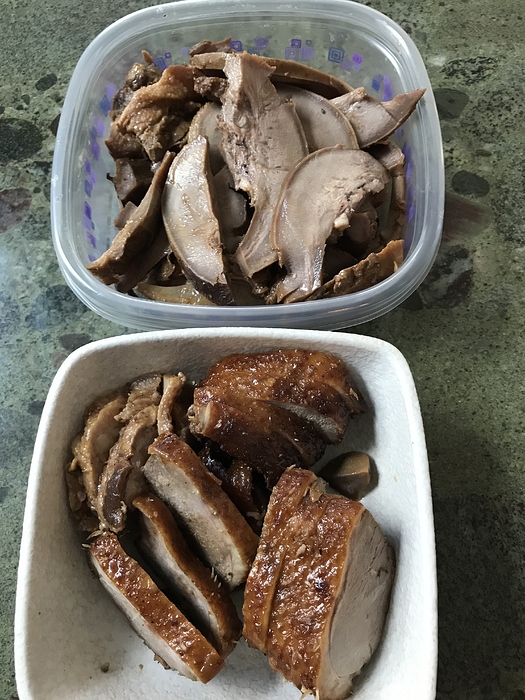 I remember those dried shrimps from Hong Kong. What a meal, those frogs, those soups! Just like at a restaurant.

How come those meat were sold so cheap in the hanging restaurants? You are talking about SF, right?! Here in Paris, the portion size is maybe twice, but costs around 14€ takeaway from a good one and half of them are bones. And you can’t choose which part you want, they automatically sell you half a duck. There are of course, some cheaper restaurants, but they are not very good and not at that price.

By the by, was the cheese from the Snowdonia Cheese Company? They do quite a range of flavoured stuff. I’m not generally keen on flavoured cheese but their base unflavoured product - Black Bomber - is a belter of a sharp cheddar.

Comfort food was required last night. It was braised chicken thighs in a creamy mushroom sauce, mashed potatoes and steamed broccoli with carrots. It all really hit the spot😋

How come those meat were sold so cheap in the hanging restaurants? You are talking about SF, right?!

This was Yee’s on Grant Ave in San Francisco. Yee’s is a full scale restaurant with a good ready to takeout section. In addition to whole ducks, geese, chicken and squab, they also offer myriad other options. Like goose/duck wings/web, fried chicken, cured tofu, sweet/sour pork, etc.

The takeout is a daylight business. In the evening, the focus is on the restaurant service. Therefore, every day after 4pm or so, they portion out whatever remains in the pans on the steam table into small easy to buy portions. These move quickly and the counter people are soon able to breakdown and clean their station.

Nice option when we’re too lazy to cook ourselves.

A feast, whoa! In what city do you live?

In what city do you live?

The City by the Bay.

Where little cable cars, climb halfway to the stars.

My husband is out of town until Friday. So just cooking for me and the toddler. I made miso teriyaki salmon and soba noodles with sesame orange and black vinaigrette, sugar snap peas, cucumber, and red cabbage. The babe ate a few bites of salmon, played with the cucumbers, tasted and rejected the noodles and sugar snap peas, and filled up on cottage cheese. 🤷 I try not to get too invested and just be happy that he is exploring new flavors and textures. 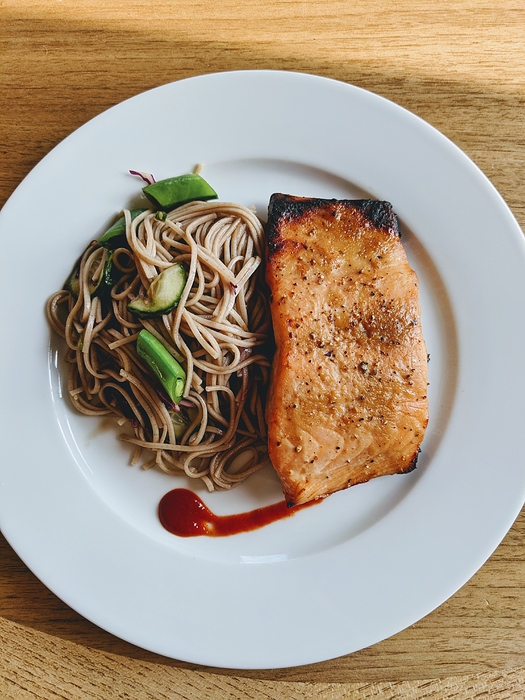 Your photos are so vivid that it feels like I could reach out and help myself to a taste!

The babe ate a few bites of salmon, played with the cucumbers, tasted and rejected the noodles and sugar snap peas, and filled up on cottage cheese. 🤷 I try not to get too invested and just be happy that he is exploring new flavors and textures.

Red sauce bubbling away on the stove! Using bits and bobs from the freezer and fridge - hot Italian sausage, onion, garlic at the start. Red bell pepper and crisped bits of eggplant later. Perhaps mushrooms too. This will become sandwiches, a baked something using ricotta which has been languishing in the fridge and over spaghetti tonight. Crusty baguette to go with. High winds expected with storms moving through tomorrow so this will make meals easy if the power goes out for hours.

Returned to the Wok tonight.
This is a Shrimp & Rice Stick & Snow Pea Pod Stir Fry with a heavy Asian influence. And honestly, I’ve never cooked Shrimp better than I did here tonight. 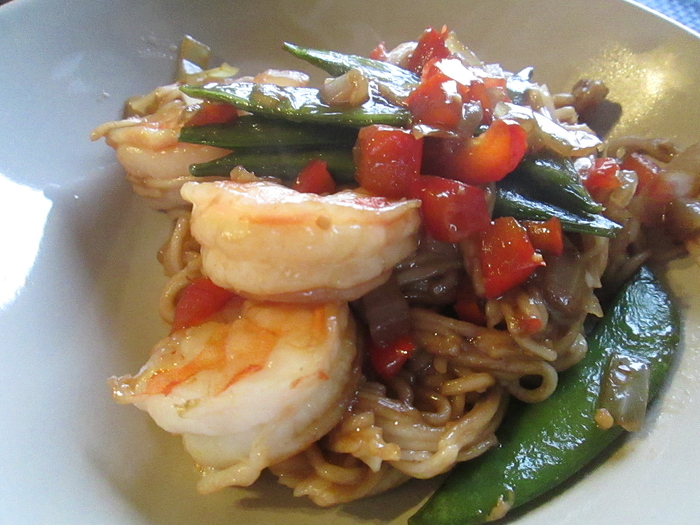 I could dive right in. The shrimp looks outstanding.