Does anyone have a favorite pumpkin scone recipe?

I think of pumpkin scones as Australian, so pretty plain: 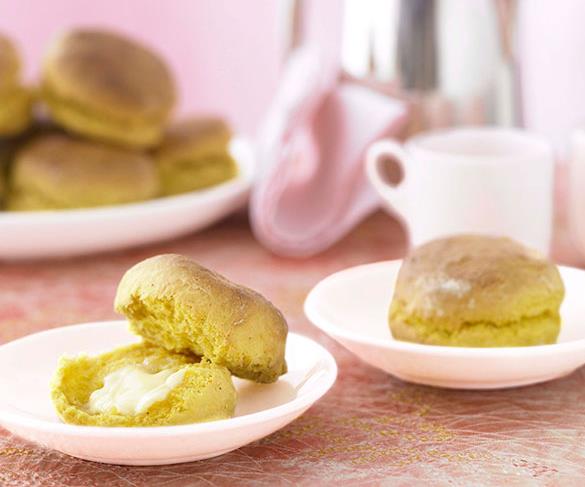 This recipe is a twist on a high tea favourite.

Just in case you might want a different take from the usual American version.

Rose Levy Beranbaum’s pound cake from The Cake Bible. I don’t have the book, so I used the post on Jenn Segal’s website, found here.

I divided the batter into 3 x 220 g. portions, and made mini versions, and otherwise followed the recipe exactly. They took about 43-45 minutes to bake.

I’m not a frequent pound cake maker or eater, so I don’t have much to compare it to, but it was exactly what I wanted to make – a giftable-sized pound cake for serving under fruit. The recipe was super simple to make. I plan to sample it further tonight with the first helping from my summer rumtopf. 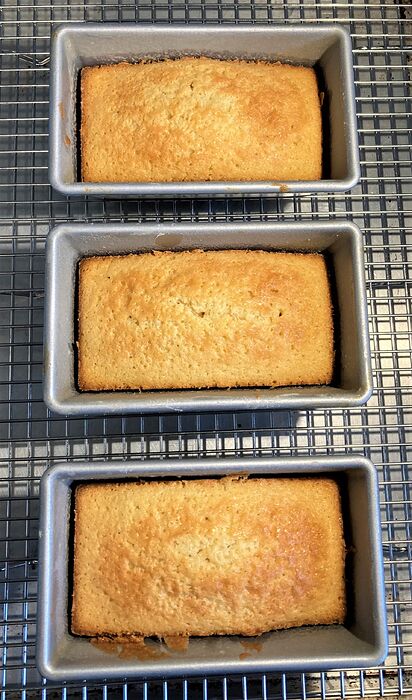 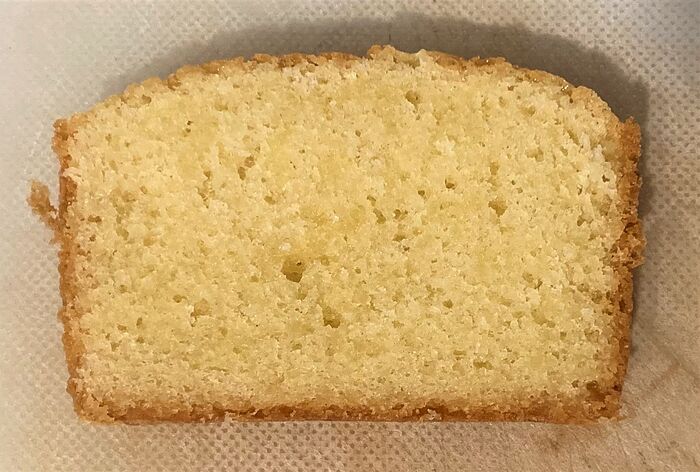 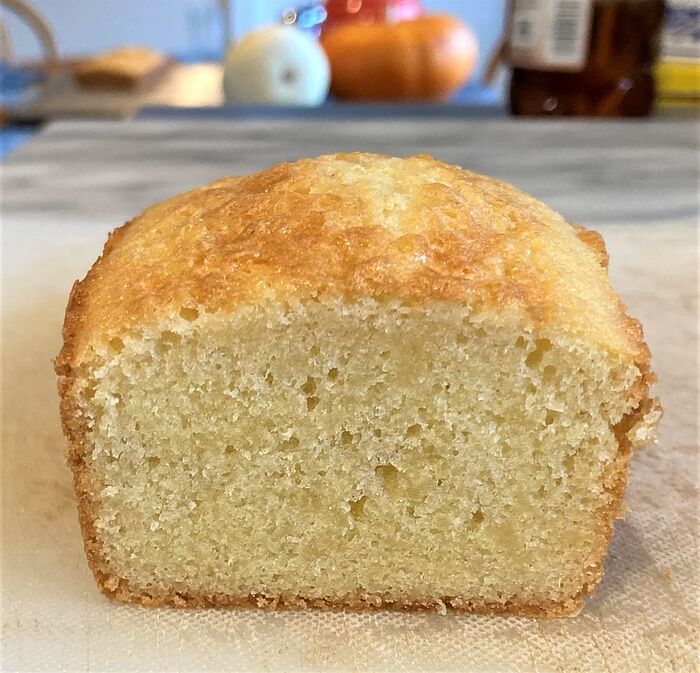 Unsure as to why my crumb shot didn’t load .

I didn’t bake it, but I must comment: in February I bought an entire Ukranian honey cake at a fundraiser at a local Slavic church. I ate half and froze half. Tonight I remembered it in the freezer an sliced off a frozen taste. HOLY COW. Turns out it’s incredibly good frozen, too.

I have a large quantity (2.5 cups) of fancy artisan ricotta that needs to be used. What should I bake with it?

Pre-Thanksgiving baking to take along tomorrow.

College roommate’s husband loves all things citrus, her kid favors chocolate, she’s game for anything I bake (which is very kind because I frequently subject her to experiments). So we have citrus and we have chocolate - who am I to deny either!

Baked a whole recipe in halves, the second portion of each for my aunt, Thanksgiving hostess extraordinaire.

Full (9’) recipe baked in two pans, a small bundt (6 or 7”?) and a small (5”?) cake pan. (Couldn’t find the other small pan or I would have skipped the bundt. Must find that pan when I get back, or figure out which friend has it.)

Very interesting experiment tonight: I had medium eggs, so I used 3 instead of the 2 large called for. Cakes were maybe 1.5” taller than usual.

Well, the lofty new height wouldn’t fit into the recycled chinese food containers I use to transport them, so I trimmed a thin layer — cook’s treat! (Also, my favorite bit because it’s the crunchy part - but only on day 1!) 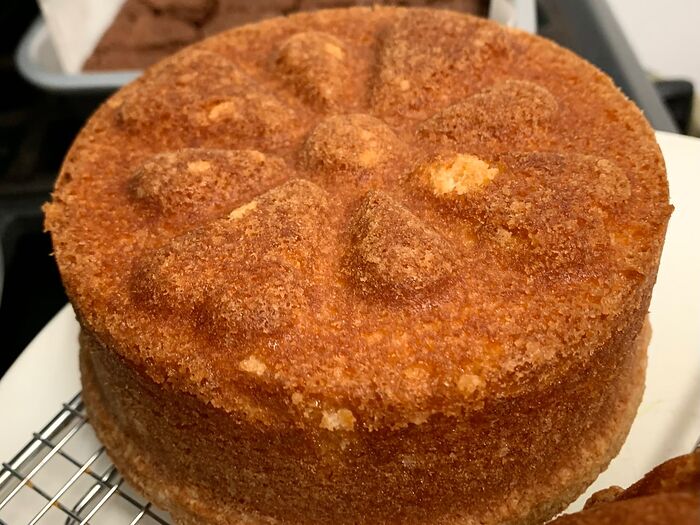 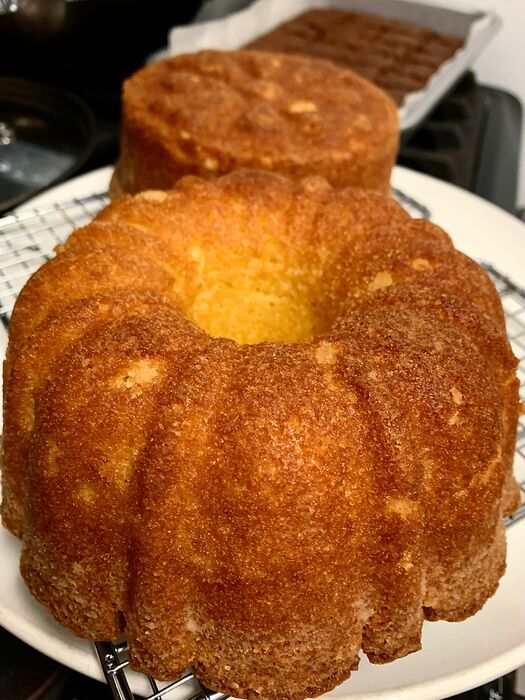 Been a loooong time since I made these. I used a new pan tonight and I’m not sure I’m happy with the pan - even though it should have worked volumetrically, the batter seemed more thinly spread than usual.

Outcome seems fine, but I have to think about it. Maybe 50% more batter next time for this pan.

Annoying when you’ve been baking the same recipe in the same pans over and over and suddenly change something. 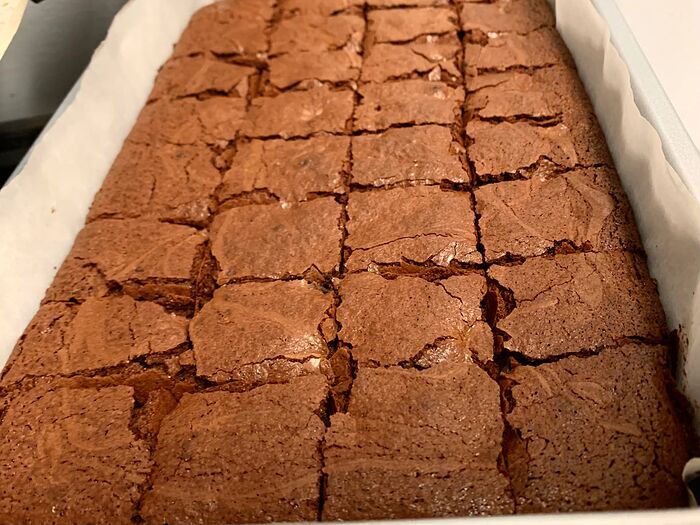 I always cut the sugar to 1 cup to be closer to the six ounces of butter and flour called for. 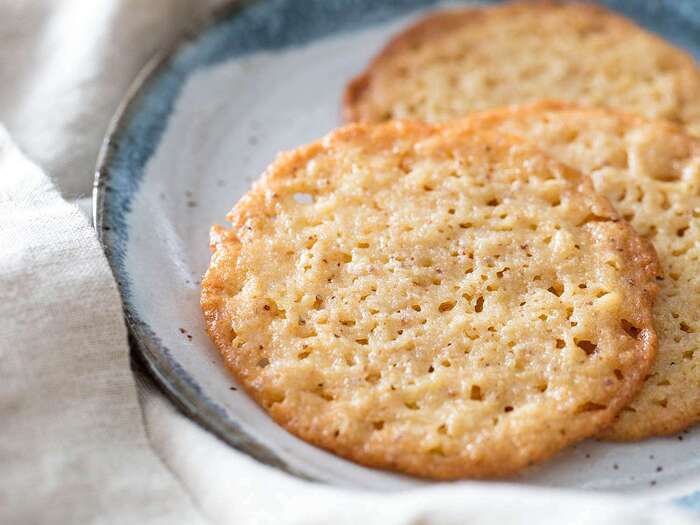 These thin and lacy cookies are oh-so-slightly crisp around the edges, with chewy middles that are nutty and rich—eating them is like mainlining brown butter. The secret to their incredible texture is ricotta, which helps the cookies bubble and...

Outside of that I love simple baked ricotta with olive oil, thyme, and black pepper, lasagna, or stuffed shells.

Pumpkin-oatmeal scones with currants and pecans.

I needed to use up a can of pumpkin after making the pumpkin ice cream. I settled for an amalgamation of the King Arthur and NYT recipes, which were fairly similar with the exception of the oats (I included them). Modifications included use of partial white whole wheat, and 50/50 white and brown sugars. I skipped the candied ginger, but added a little extra ground ginger. Add-ins included 1 c. each of currants (soaked) and chopped pecans. I added 2 T. cream to bring the dough together. Tops were sprinkled with raw sugar and few oats.

Yield was 13 scones using a generous #14 cookie scoop. I baked 4 straight away (after chilling) and put the rest in the freezer for another day.

I liked these quite a bit. Crunchy on the outside, tender on the inside. Chock-full of add ins, and not too sweet. The pumpkin flavor was there, but not overwhelmingly so. For a sweeter scone, a drizzle of glaze would be nice. I’ll make them again. 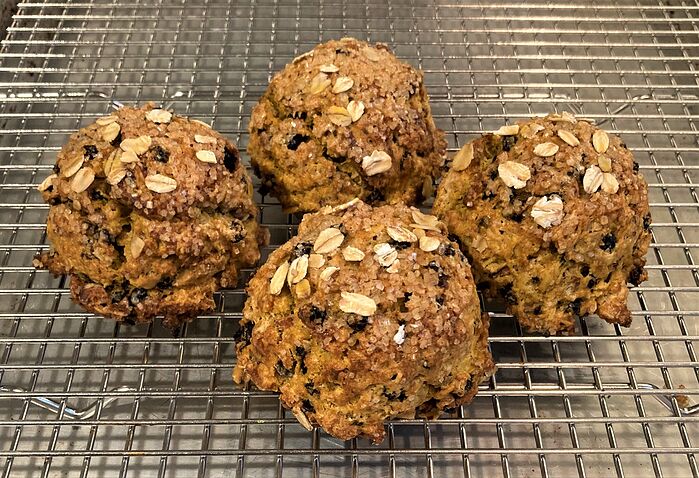 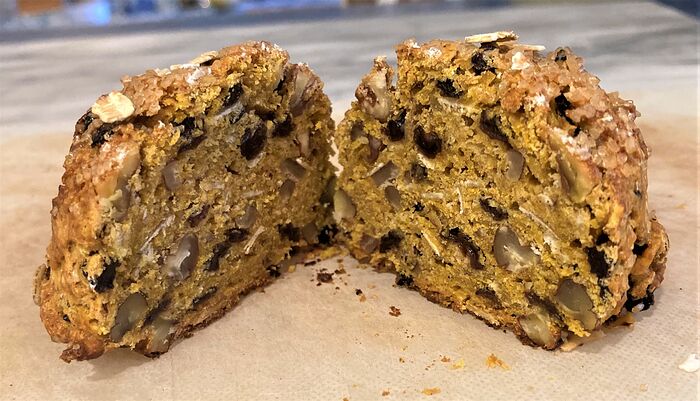 I wanted a quick bread to go with tonight’s dinner. As I was watching youtube this afternoon, this recipe popped up from Preppy Kitchen. 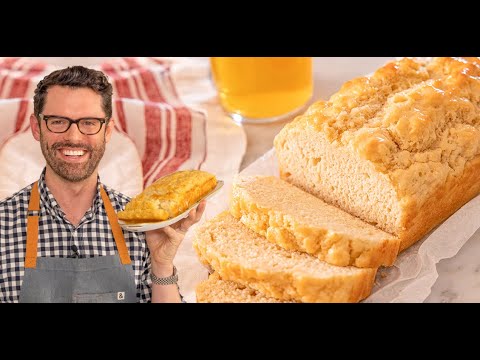 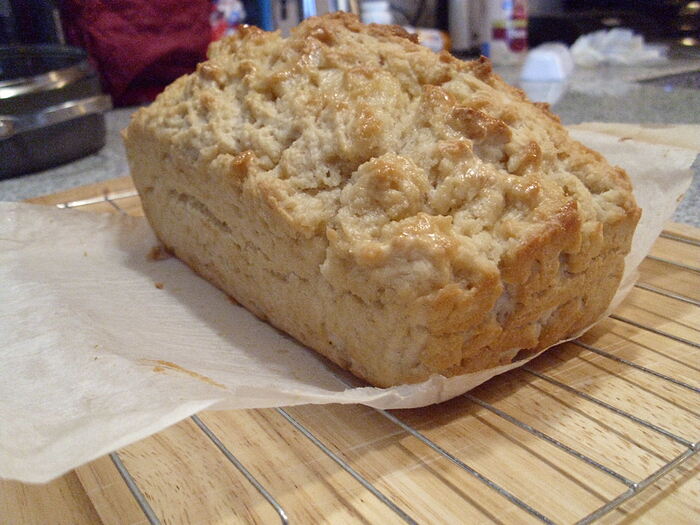 I made those years ago and they are delicious

The pies themselves are still baking, but I wanted to post about the Milk Street pie crust which is amazing. I decided to try it out since pie crust is so annoying to make here between the temps and the AP flour having such low absorption. This crust is made with a tangzhong-like paste of cornstarch and a little sour cream. It rolls beautifully and when blind baked, no shrinkage! No deformation! Flaky and delicious (I had some extra crusts since I’m doing mini pies and only had enough filling for 6 out of 8 shells). What I like is that the water amount is set and included in the paste which is added at the beginning, so not added to the dough. The only other liquid is sour cream, which doesn’t hydrate the dough the way water does.

Thanks, found the recipe here.

Looks very similar to one I saw on ATK recently. Worth a try, but not this week.

Anyone have a favorite pumpkin bundt or coffee cake? Butter-based, please. I have a couple pumpkin cakes I like, but I wouldn’t mind a couple different twists.

I always substitute kabocha for pumpkin because to me kabocha is more flavorful. You could do the reverse with Claire Saffitz’s kabocha turmeric tea cake.

I made it, as written, for a friend who is avoiding dairy. It was delicious. 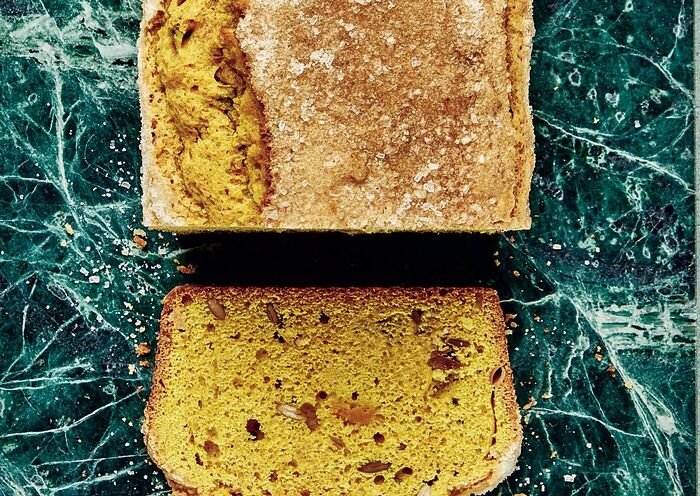 Kabocha squash stars in this easy tea cake recipe scented with turmeric. A riff on a traditional pumpkin bread recipe, this one uses roasted kabocha squash.

I just madethe Lacy Brown Butter and Ricotta cookies you recommended. They are AMAZING taste-wise, just tremendously good. Not much to look at but the flavor is outrageous.

So glad you made and liked them! People tend to go crazy for them when they try them.