Let’s use this thread to share concise weekly dinner menus for each week in December. It’s helpful if you can include your location and how many people you are feeding. Links to recipes are always appreciated, and sources help.

If you’ve never done weekly meal planning, this could be a great month to start. Even 3 days of not ending your work day standing in the kitchen saying “wonder what we could have for dinner” will be a gift to yourself. Will your month feature soups? Breads? All-appetizers, all-the-time? Hosting an open-house? Holiday treats baking efforts offset by carry-out meals?

We all know plans can change, so it’s fine (practically expected) when your week gets rearranged from your posted plan. You may choose to report actuals for the prior week to share ideas with others.

Reminder – Keep your comments menu / food related. And in the interest of faster viewing times, please use the Knife&Fork “like” under a comment to indicate you liked it or want to echo what was said by another, rather than posting a separate comment.

Reporting in from northwest England with meals for the festive period for the two of us:

25/12 Out for lunch at family member. Cold gammon & salad for dinner. Trifle

27/12 Use up cold plate. Celeriac remoulade

28/12 Out – restaurant. Need to shop today/tomorrow

All the non-perishable groceries are already bought and stashed away. All the meat is either in the freezer or on order with an organic farm. It’ll need a shop on 23/12 for fruit, veg, etc.

I’m not sure I’ve ever posted to this thread before but we always plan the week’s menus. We wouldnt know what to buy at the supermarket otherwise.

Cooking for 1 at the Jersey Shore

Nice to see you here Harters!

I’ve never mad a fish pie, but love them. Maybe …

Hi there, LM. This is a new recipe for me from my hero, Nigel Slater 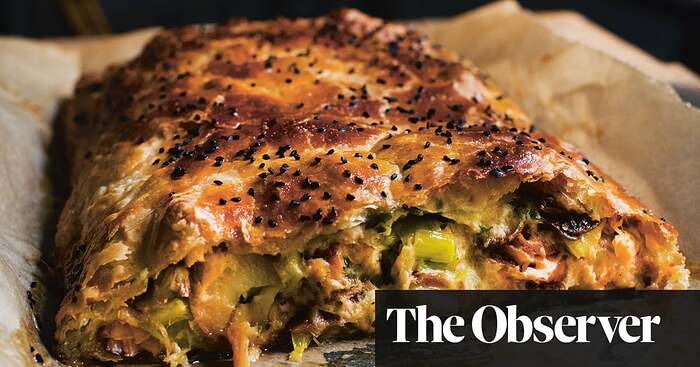 Thank you Harters, that looks beautiful. After seeing your post I went onto EYB and found ones from Nigella and Jamie Oliver that looked really good to me too. I’m not a big boiled egg fan, and am thinking it wouldn’t be catastrophic to just skip them, maybe add a little extra vegetable in place.

I wouldnt put egg in a fish pie. We usually do a cheats version - baking the (supermarket) puff pastry separately from the “stew”. The stew is either a tomato based Mediterranean -ish sauce or a cheese sauce if we want to come closer to home. Protein tends to be whatever is in the freezer but, most often, cod, smoked haddock and a few prawns.

I love fish pie - it’s one of my aunt’s specialties, but I also make it myself when it’s been too long since I ate hers.

Our is mixed seafood (usually cod, salmon, shrimp, scallops, or some combination thereof) in béchamel, topped with buttery mashed potatoes (and a layer of peas in between those which might have come about later vs the original recipe, but we love the addition).

(A recent cheat was TJ’s frozen mashed potatoes, which cut the work in half. )

Our is mixed seafood (usually cod, salmon, shrimp, scallops, or some combination thereof) in béchamel, topped with buttery mashed potatoes (and a layer of peas in between those which might have come about later vs the original recipe, but we love the addition).

This sounds so damn good.

Hope everyone in the US had a good holiday week, however it was spent, and everyone else had a good week!

Actuals for what was a travel week for me, and some ideas for next week – can’t believe we’ll be in December already, the horror!

Mon - Went out to lunch with a friend and ate the leftovers for dinner so I could bake for my Thanksgiving visits.

Tues - Travel day. College roommate picked me up and took me home so I could see her family after three years – which is a lifetime when one of them is a 5yo! We had the best time. Dinner of crab cakes and more was from a meal service. Dessert was my baking, and sent the 5yo into a visible sugar rush before bedtime, both hilarious and guilt-inducing.

Wed - At my aunt’s, thanksgiving prep day. Dinner was her fish pie which I always crave, made easier by frozen mashed potatoes from TJs.

Thurs - Turkey day. All the usuals for a late lunch / early dinner. No room for more food later, but we snacked and ate the orange olive oil cake and brownies I took.

Fri - Travel day again. Late lunch of bottled Indian curries (jhalfrezie and tikka masala) doctored by me, plus frozen naan and fresh rice. I am just not a bottled curry person – the tikka masala was fine after some tinkering, but the jhalfrezie gave me heartburn on the train home. I ate my thanksgiving leftovers for a late dinner when I got home.

Sat - Out for Sichuan food with friends who were in the city for the weekend.

Sun (tonight) - I’d like to cook something simple but am lacking inspiration and mojo at the moment. Might go with mustard salmon or Nigella’s fish bhorta, plus rice and tbd green veg. Maybe a simple dal too.

Ideas for the coming week:

Have a lovely week ahead!

That’s the thing - I love the idea of a mashed potato topping but it feels like a lot of work on top of making the rest of it. So once again you have given me a genius idea for how to make this happen more easily (you saved me from frying chicken pieces for some Chinese dish a few years back). So how are the frozen mashers? Any chance you have a picture of the box/bag they come in? Our mashers are very indulgent- lots of butter/cream/fat, but maybe a lesser version won’t stand out as such if it’s part of a pie, maybe I can dot the top with butter before cooking.

The mashed potatoes at TJ are seasonal I think - they were in the vegetable / sides section. They were actually quite good, aside from having to pick out a few black bits. I did add butter before topping the pie, because our usual potato topping is no diet food

I actually don’t mind mashing potatoes — I tend to stick them in the PC or IP whole, and use the twist-off method for the skin.

Or if I’m being particularly lazy, I peel and chop them, then stick them in the microwave to cook fast, and use a serving fork to mash them more expediently (and with less hand-hurting imo) than the potato masher. (Of course I also own a ricer, but that would entail taking it out of the drawer and washing it later.)

Btw — this is a great second-day dish if someone is already mashing potatoes for something else (like mashed potatoes for steak or thanksgiving). Just have to remember to double the potatoes so there are leftovers for this — or for shepherds / cottage pie.

One final note on TJs mashed items — I have also used the frozen mashed cauliflower with great success, but I like it smoother than they make it, which just means sticking an immersion blender in at the end. I’ve also combined that with a boiled / pressure cooked potato to make myself thing the topping is “healthy” ie has a hidden vegetable.

I’ve had the TJs frozen mashed potatoes a couple of times. They look like those styrofoam packing “noodles” when you take them out of the bag. You microwave them first at 50% and then fully, and the package instructions are fine, except that I reduce time a bit because our microwave tends to be fast. I add butter and lots of ground pepper when mostly finished and put back in for a few seconds. They also reheat well. I’ve done them only in 2 servings at a time; that’s two cups of the frozen.

We were skeptical at first sight but they are fine. I don’t know if they are seasonal; to us, they were new at TJs.

Yes, these came frozen in little tubes vs the cauliflower which is in mini muffin shapes.

Makes it easy to portion if you’re not using the whole bag.

Hi, everyone. We had a good Thanksgiving weekend - lots of pie and a few turkey-related mishaps. (Birdie thawed in the fridge for a few days and then I discovered the packaging was torn - there’s nothing quite like a panicked grocery store run at 11am on the day before Thanksgiving!)

Weds: pork chops/tenderloin depending on which one I find first in the freezer, leftover mashed sweet potatoes, something green

Fabulous- thank you so much for the visual aid. I like the idea that I can add extra stuff to flavor them up a bit if it seems necessary. I tend to like them less smooth than most people, and love the skins still being on. But that probably wouldn’t be great on a fish pie.

How is it that I never knew such a thing existed before and now I’m finding out about 2 options? You all are the best. I’m going to have a tough time talking myself out of making fish pie.

Was it Koreatown? I remember you first used a bag of kung pao chicken and just tossed the flavoring, then tried cauliflower. Brilliant. And you are also the godmother of my newish and much loved mandolin. I was never comfortable with my old one, so barely used it, but the one you suggested is easy to wash and use, I love it.

Only 2 of us here with 2 Australian Shepherds. We always plan their meals ahead, but not for us. I stopped cooking a number of years ago because of health issues. My retired DH took up the gauntlet. I never know what I’m going to get - it is a stream of constant surprises.