It would not be Christmas in a French-Canadian household without tourtière, our classic meat pie. Not surprisingly, there are as many recipes as there are cooks. Anyone else want to share theirs?

I have made Martin Picard’s recipe, with beef and pork, or with venison and pork. I use a lighter crust. 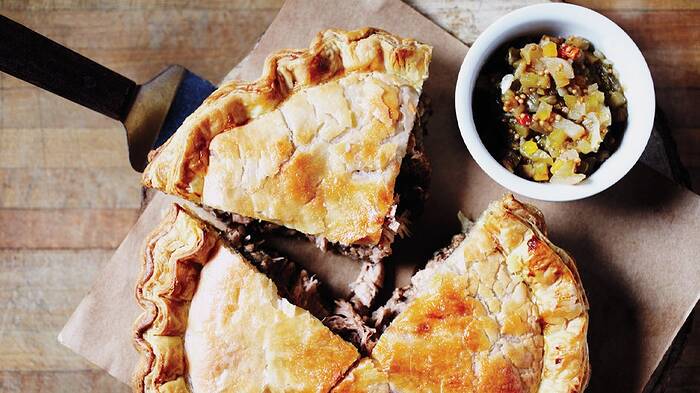 Blizzard food at its best. This buttery crusted pie, filled with rib-sticking pork, will fortify you for any winter's night. 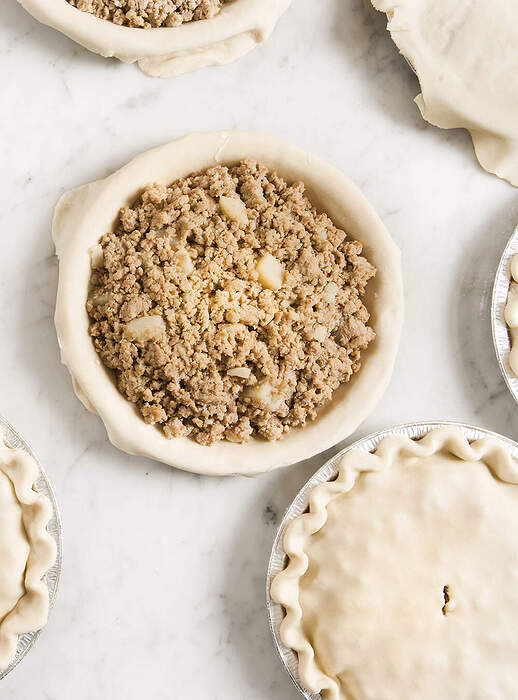 I want to make a Lac St Jean Tourtière this year. 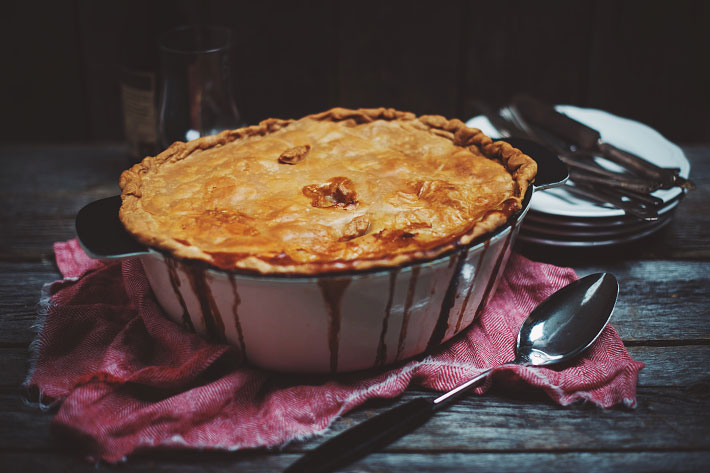 Did you know that tourtière and soup are among the first meals known to humanity? According to the Encyclopaedia of Cultural Heritage of French America, 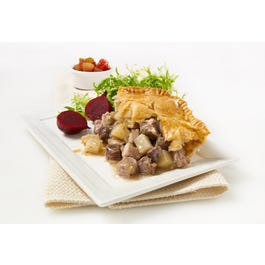 The SAQ offers a wide selection of alcoholic beverages (wines, beers and spirits) available in more than 400 stores in Quebec, as well as a large number of products available for online purchase. 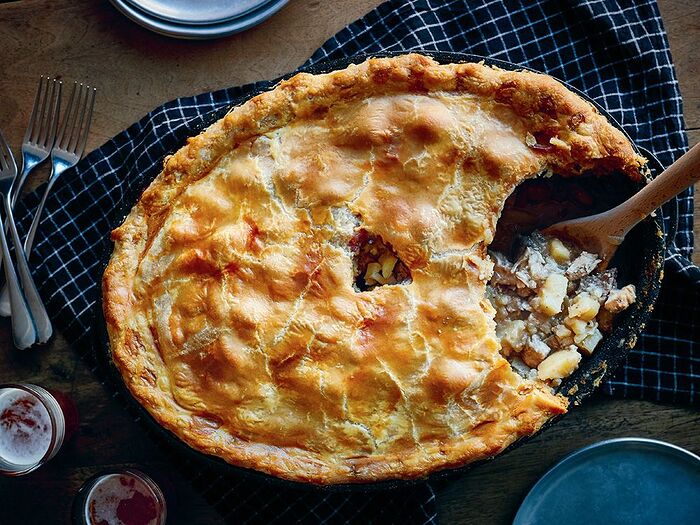 Cook this: Tourtière du Lac-Saint-Jean from Duchess at Home

'It's just soul-warming. It's so good,' says Giselle Courteau of this Québécois classic

I took the liberty of translating in english a number of classic Quebec dishes to give access to our anglophone friends to classic dishes from the Quebecois repertoire. I also sprinkled some modern variations from one of our most famous chef: Martin Picard. His iconic restaurant was all about revisiting those classics and adding foie gras when he could. Some of my links created pictures, some none. I don’t know why. Click on the text in the grey box to get access to the tumblr page when there a…

I ADORE tourtiere, usually load up on my annual trip to montreal (and bring back a couple frozen!)

I tried my hand at it one or twice and it turned out better than I expected, this is a good reminder that I’m long overdue (haven’t been to montreal since the pandemic).

How do you make yours @LeCoqNoir?

In most French-Canadian homes, it is just not Christmas without tourtière, the iconic meat pie of Québec, traditionally served at Réveillon after midnight mass. Perhaps not surprisingly, there are as many recipes for tourtière as there are cooks who make it. And, of course, there are regional variations. In most of Québec and in New England, it is baked in a 9- or 10- inch pie plate with a bottom and top crust while in the Lac Saint-Jean and Saguenay regions of Québec it is usually a deep-dish casserole with only a top crust. The meat also varies, although pork is nearly always part of the mix, and sometimes the only meat. Beef and veal are often added as sometimes is chicken. Game—rabbit or venison—is popular along the Saguenay. The meat can be ground or diced. The filling usually includes a starch, commonly diced or shredded potatoes, although oatmeal or bread crumbs are also used, the last sometimes soaked in milk. The seasoning can be as simple as salt and pepper or include cloves, cinnamon, savory, and other herbs. My mother claimed, evidence to the contrary notwithstanding, that her family was from Nova Scotia which, if it were so, might explain why her choice of seasonings was remarkably similar to those in haggis. (In fairness, her grandmother, Exilda Daigle, may have been Acadian.) This recipe is my own. It is near enough to my mother’s to evoke childhood memories but with a step back to the old country.

Note: this recipe will make a 9- or 10-inch pie, perhaps with a bit left over. Extra filling makes great sandwiches.

Salt and pepper to taste

Pâte brisée for a two-crust pie

Mix the meats together thoroughly and brown over medium-high heat in a heavy 12” cast-iron skillet, working in batches if need be. Remove the meat to a strainer over a bowl and set aside to drain off excess fat.

Wipe out the skillet and add a bit of oil. Sauté the onions over medium-low heat until softened but not browned. Add the garlic and continue cooking for a couple more minutes. Put the diced or shredded potatoes into the skillet and add water to just cover. Cover, turn the heat to low, and simmer until the potatoes are partially done, about 10 to 15 minutes.

Return the meat to the skillet and combine with the potatoes and onions. Add water to barely cover. Sprinkle on the spices, herbs, and pepper and stir in. Simmer gently, uncovered, until most of the water has been absorbed or has evaporated. Add salt to taste along with additional spices and herbs if needed. Remove the meat mixture to dish and refrigerate, ideally overnight, or freeze for later use.

When you are ready to assemble the pies, preheat the oven to 205°C (400°F). Roll out the pie dough into two rounds and line a pie plate with one of them. Fill with the meat and cover with the second crust. Crimp, trim, and decorate as you wish. Tourtière is not usually vented. Bake for about 45 minutes or until the crust is golden.

Here is link to it posted on my blog. 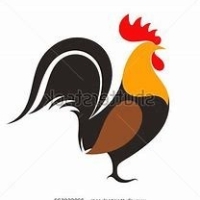 In most French-Canadian homes, it is just not Christmas without tourtière, the iconic meat pie of Québec, traditionally served at Réveillon after midnight mass. Perhaps not surprisingly, there are …

Many Quebec recipes also call for Quatre Èpices. I like the versions that include nutmeg and allspice the best .

Very similar to what I made based on versions I had eaten and enjoyed.

In addition to the savory (which I had to hunt down), a bit of thyme and sage, scant cloves, but no cinnamon. Maybe just a pinch of nutmeg and allspice too. I also simmered the ground meat with some of the onion and garlic (cant remember whether broth or water) and a bay leaf first.

The only difference I could discern was that my filling didn’t bind the way the ones I had eaten did – which I have discovered with some ingredient snooping was the result of an egg (though breadcrumbs or oats would achieve a similar outcome).

My mother made it with lots of cloves. I think that savory, which has a somewhat similar flavor, was more likely traditional since cloves were probably not easy to come by a couple centuries ago.

I often search for recipes using French terms. I find that those in English are often inauthentic. A classic case is boeuf bourguignon. Search in English and you get variations of Julia Child’s recipe. But in French you get the original joux de boeuf bourguignon which more rustic and down-to-earth.

I have made Martin Picard’s recipe, with beef and pork, or with venison and pork. I use a lighter crust.

Me too, although I always use the pork on pork combo as indicated in the recipe (but like you, a different crust). I really love the contrast of the shredded braised shoulder and ground meat. I add nutmeg/mace and allspice, too.

My parents lived in Montreal for a few years before I was born and my mom used to make a very simple tourtiere recipe (just ground beef, onions, potatoes, garlic and maybe a pinch of cinnamon/clove) that she learned from a friend there. Though I’d choose Picard’s more complex version as an adult, I LOVED the simple classic as a kid and would happily eat it any time.

I wish I could recall the origin of the recipe I use. I believe it was a French language publication (on-line), in any case:

Many Quebec recipe sites have their Quebec recipes available in English and in French. Ricardo- a Francophone French Canadian with a following of English and French speakers, has a little button on each recipe page, so you can choose to see the same recipe in French or English.

Luckily, I’m fluent, so I can follow recipes in French or English.

We keep frozen Tourtière in the freezer year-round. I buy some from independent bakeries, as well as some factory-made versions, available at the grocery store (St Hubert or Farm Boy). The basic grocery store variety are often all-beef.

Another Picard fan here. I make it with his butter crust. It turns out like a really flaky puff pastry and makes enough for much more than 1 tourtiere.

I have never heard of lamb being used in tourtière. Pork is traditional except in the Lac St. Jean and Saguenay regions where game is popular.

I forgot to mention, that my mother would make extra tourtière meat and stuff the Christmas turkey with it.

All beef, or part beef/veal and part pork, has become much more common than all pork Tourtière throughout Quebec and Ontario.

While I’ve only made Tourtières a dozen times, trying 3 or 4 different French Canadian recipes, I’ve purchased dozens of different Tourtières and have not seen all pork Tourtières for sale in Ontario.

It might have changed over the past 40 years. All pork might be a regional preference or family preference.

The commercial one I buy most, as a year round staple , includes veal, beef and pork. https://www.st-hubert.com/en/grocery-products/pot-pies-quiches/tourtiere-235g.html

The lamb may have been my modification. I’m pretty sure the original recipe wasn’t written in “pounds”, either.

Most traditional Tourtières would be made with whatever meat was available. People in the countryside would use more venison or moose (since hunting is very much part of the Quebec regional gastronomy traditionally), people in the city might use more pork since it’s cheaper than beef, venison or veal.

Lamb isn’t that much of a stretch. I bet my household would prefer that to the standard pork and beef version. 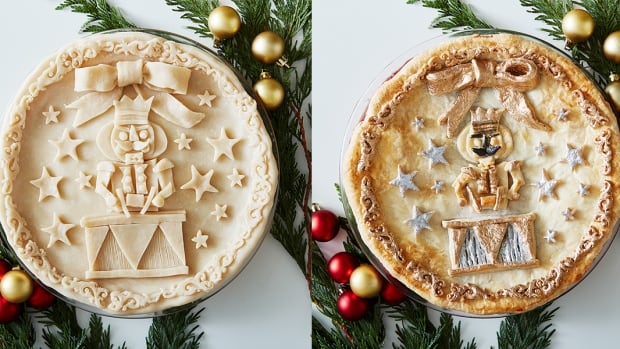 Tourtiére is a traditional addition to the holiday table. It's also perfect for busy weeks since it can be made ahead, baked, frozen and reheated. 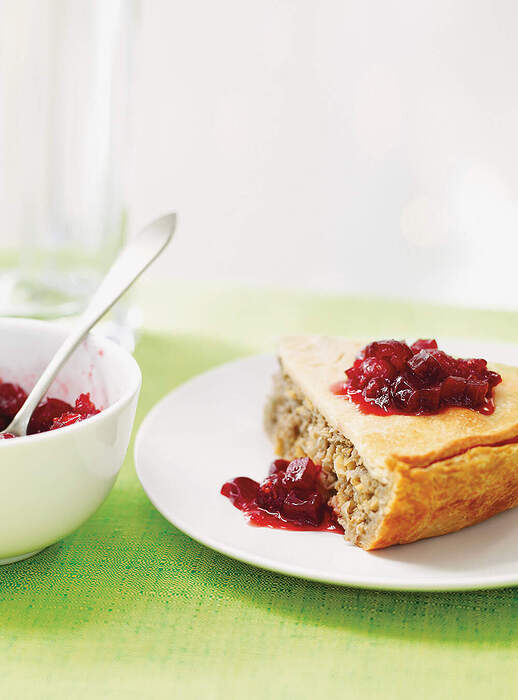 I came across the recipe you posted earlier, and it was lamb.