The Joy of Cooking - Squirrels etc.

I have one of the older Joy of Cooking volumes, It’s pretty different from the more recent one I have (a gift). I like the old one much better for the most part. I doubt if I have the original edition, but it has a lot of education that the newer ones don’t have.

Which edition do you have? I sort of wonder why I am still hang on to mine.(1997 copyright).

I love that one!

My first husband had his mother’s 1937 edition. I’d I knew then what I know now.

I have that one too. It’s poorly bound. Wish I still had Mom’s. 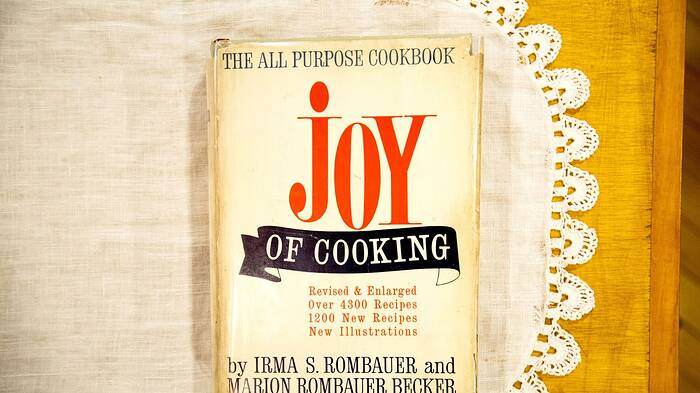 The Obsessive Sport of Shopping for a Vintage 'Joy of Cooking'

Can you find a copy with the legendary squirrel?

“There wasn’t a reissue until 1997. Edited by Maria Guarnaschelli, this edition, from an industry perspective, is totally respectable. But it wasn’t the same—gone was the intimate tone, gone was the flayed squirrel and the sections on canning. The attempt to bring it into the modern world where eaters preferred crisp-not-mushy vegetables, and curries that didn’t call for pineapple, coconut or raisins, came at the cost of the personality set down by Irma Rombauer and her family.”

" Proceeding with “familial caution” (yes, the ’97 edition is something of a “family scar”), personal favorites, and an understanding of what the Joy means to so many, Scott and Becker hope that the book will continue to be a kitchen workhorse, that deserted island go-to."

Just checked my copy, from 1995 - the squirrel section is there, along with advice for dealing with opossum, muskrat, porcupine, raccoon and several other interesting critters. Glad I got my copy just under the wire!

But it wasn’t the same—gone was the intimate tone, gone was the flayed squirrel and the sections on canning.

Canned squirrels? Now, you’ve got my appetite all revved up. Who needs Spam.

Had to get my beloved, stained, copy to check the publication date. 1975. Original dust jacket… I have it stuffed with miscellaneous notes, menus, mementos. It was quite handy when we lived in Europe in the mid-2000’s. Had to look up the squirrel! Have to admit I’d never seen that particular page (515). “Season the gravy with Walnut Catsup” and “serve with Polenta”.

Squirrel , gravy , walnut ketchup. Served over polenta . I’m never looking at all the squirrels in my yard the same again . Hmmmmmm.

Ha ha . No way . Couch , turbine , Doubtfire ,Melanie . And all the others . Are my pets . And yes they love peanuts.

I’ll pass on the squirrel…but I do have that older copy of JOC, from my late MiL. It’s in a spiral bound paperback, but holding up. Have seen the illustration of the flayed squirrel, et al. Have used it to reference/look for certain things. I also have the 1997 revision, and agree with others, the binding is pure crap! H refers to the revised JOC often, but I’ve never warmed up to it. I do however refer to it sometimes. Agree earlier one is better, by far.

Agree on the binding. My first one fell apart, but I use that edition all the time so I bought a second copy.

The problem is that I am one of those monsters who write notes in my cookbooks…and the old one is full of tweaks and yields. (Can be doubled- this is delicious- don’t bother)

My favorite page is the roast turkey page. It has the weight of the turkeys I’ve made for years of Thanksgiving dinners jotted in the margins.

NEVER have I eaten squirrel … This is repulsive in thought !

NEVER have I eaten squirrel … This is repulsive in thought !

While I haven’t eaten squirrel either, I’d most certainly try it if offered to me. It’s supposed to be rather nutty in flavor, based on what squirrels themselves eat, sometimes described as a hybrid between chicken and rabbit. That honestly doesn’t sound bad to me at all.

Alligator meat, turtle soup, snails (all three I’ve tried and all three are very good!), grasshoppers and other fried insects and spiders, tripe, haggis, frog’s legs, testicles, rattlesnake, tuna eyeballs, horsemeat, balut eggs, ANY form of offal - all are I’m sure repulsive to some (many of those are a no-go for me), but they are delicacies to others.

Anthony Bourdain tried virtually everything offered to him in his travels, including what he deemed the most wretched thing: fermented shark (hákarl). He called it “the single worst, most disgusting, and terrible-tasting thing.” He also managed to choke down a bite of warthog anus, as he wanted to show respect to the chief of the tribe who offered it to him.

So one person’s yuck is another’s yum. OR it’s how the hunter and their family survive (squirrel and opossum).

It took me so long to get over the idea of what I was eating, but I eventually bit the bullet and tried it, and it’s quite good! Like a shot of super concentrated duck soup, and while the yolk looks like a Frankenstein science experiment, it tastes just like a normal yolk.

The great thing about baluts is that you never have to answer the question, “which came first the chicken or the egg?”

Ok, that settles it.

I’m putting squirrel in my next meatloaf.

I was thinking that too! And this thread was after one about corn flour went off!

I located it now.

No interest in rodents, insects or reptiles, horses, donkies, sheep or lambs amongst other things and never happen Dear.

Each to his or her own !!! Have a nice evening.

I was thinking that too! And this thread was after one about corn flour went off!

You guys and gals think I am joking?

Traditional Brunswick Stew, Hasenpfeffer or fried just like Chicken Squirrel is delicious.
If it you were given it you, you wouldn’t know it wasn’t Rabbit or Farm Yard (real) Chicken. .
What makes a Squirrel “repulsive” and a Rabbit delicious?