Hey HOs! With the influx of new HOs joining us this month, I thought it would be a good idea to separate the nominations for Dish of the Quarter from Cuisine of the Quarter. So, here goes - most of you know the drill! Please nominate dishes for this quarter in ALL CAPS below - I will leave this thread open until Friday, March 25. If there is enough interest/activity to make this a monthly thread going forward, we can always change it later! Looking forward to your nominations, both new HOs and old!

BTW, since this is a fairly new topic for HO, the only dishes we have covered thus far are SOUP and HAND PIES. I’ll create a master topic list after this quarter.

Some oldies that I’m still interested in trying multiple versions of:

And I didn’t get a chance to make my Irish soda bread, but I guess that’ll have to wait … (or be done and not typed about)

FLAN (I am committed to figuring out how to recreate the one my local arepa place makes!)
DINNER ROLLS

I’d like KNÖDEL/ GNUDI, to go with an etymological approach to dish of the month this time, and allow for all the side dish dumplings, dessert dumplings, Tirolean dumplings as well as Ricotta GNUDI.

As I migrated from CH, I pulled a few of the not-yet-made dish nominations others offered from past months. I’m listing them here, not expecting that many will get seconded this month/quarter, but to “transfer” some inspiration/ideas.
STUFFED MUSHROOMS
SFIHA/FATAYER (open or closed savory hand pies originating from the Levant) - were the “hand pies” here on HO sweet or savory or both?
CHOCOLATE LAVA CAKES
DINNER ROLLS
JAPANESE SOUFFLE PANCAKES
RUSSIAN SALAD (also know as Olivier / Olivye salad)
TABOULI
REFRIED BEANS
SCHNITZEL/MILANESE
RICOTTA GNOCCHI/GNUDI
CHEESECAKE
SEAFOOD SOUPS- CIOPPINO, BOUILLABAISSE, MANHATTAN CHOWDERS- not milk-based

STEAK- grilled or pan-fried or baked… 'hound wanted to know your favorite steak recipe. Reverse- grilled? What cut do you like? Do you make sauces? Bernaise?

Thanks everyone for your suggestions thus far! Regarding the current quarter’s dish, HAND PIES, the discussion was meant to include both sweet and savory hand pies from any culture/cuisine. Generally speaking, these quarterly topics tend to be broader than monthly topics might be, to keep people from getting bored/burned out on a dish over a three month period.

That said, something like sweet yeasted breads might be a more likely candidate than the more narrow banana bread (similarly, seafood soups rather than manhattan-style chowder, etc.). However, if there is a lot of participation, we can certainly turn this into a monthly rather than quarterly event with a more narrow focus! As we go through the nomination process I will try to group some of these ideas into broader categories for the voting thread - I’m sure we’ll get a good idea of engagement level once we start the new quarter. Thanks in advance for your patience, HOs!

Another etymological suggestion because I like words and savoury pastries.

Kebab is a cooked meat dish, with its origins in Middle Eastern cuisines. Many variants are popular around the world. In most English-speaking countries, a kebab may be the classic shish kebab, shashlik or souvlaki – small cubes of meat cooked on a skewer – or, in the Middle east where it is known as shawarma or North America where it is better known as gyros where as in Turkey fast-food is known as doner kebab. By contrast, in Indian English, Bangladeshi English, Pakistani English and in the... 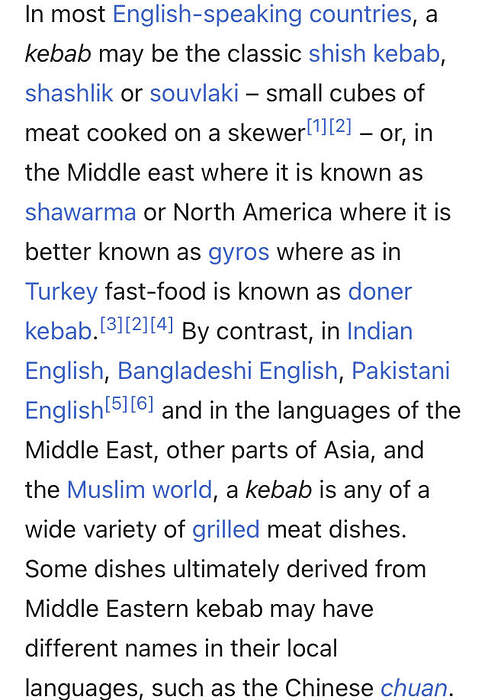 Guessing this was meant to be UNyeasted?

May I propose that we try a narrower-than-usual dish for one quarter, to see how participation goes given new members?

Often for DOTM on CH people would run out of time and not manage to make a dish in that month despite best intentions – maybe having a quarter would actually help, even on something that seems narrow (like banana bread for eg: I have 3 recipes I keep meaning to try against each other, but never do because… time, and who’s going to eat it over and over again in a month?)

But I’d also be happy to revise my nomination to something broader like LOAF CAKES or UNYEASTED LOAF / BREAD / CAKE – the latter would allow me to try savory things like Chetana Makan’s Spinach Paneer Loaf or Dorie Greenspan’s Cheesy Apero Bread in addition to Banana Bread.

That said, I’m torn because the broader category now, the less there is to play with later…

Since the last DOTQ, there is zero participation except a few holiday meals, i would say carte blanche for anyone who has great ideas or new direction. Beside the choice of monthly or quarterly, it can also be a bimonthly event.

Our most successful DOTM is chicken and rice as theme, it was neither too narrow nor too broad.

I think I was the original nominator of YEASTED sweet breads. Things like pulla, babka, povitica etc. Unyeasted bread, aka soda bread is the current DOTM on CH.

Loaf cakes might be a compromise and give wider latitude? Banana bread, zucchini bread etc. Baked in a loaf pan, but still cake. Win-win! Though perhaps quick breads were already a DOTM? Not sure.

I totally agree that having 3 months to cook a dish at least once (and if you love it and want to try different variations, more than that) could end up being a wonderful consequence of having moved over to HO.

Hey, y’all. I’ve managed to scrape a list of all past DOTMs from the Chowhound site (no links, because the threads are going away). This is mainly just so people can see what kind of dishes we’ve done. As time went on, the dishes started to become more specific.

As one of the former coordinators on CH, I’m good with keeping it quarterly for the time being. We can always change it later. On a lot of DOTM’s over there, people would only make one or two variations of a dish, because how many times do you want to eat/make the same dish in one month. This was especially true with sweet dishes. I went crazy when lasagne was DOTM and made eight versions in one month. Yes, eight. That was a whole lotta lasagne to eat, and I don’t need to do that again. Having more time to explore a dish in depth seems like a good thing to me.

A precision, is there going to be sweet theme in baking board, like baKing DOTQ or BDOTM?

Thanks to @MidwesternerTT for pulling the list of recent DOTM nominees. That reminds me to nominate
SFIHA/FATAYER
STUFFED MUSHROOMS
SWEET YEASTED BREADS (I used to make a mean panettone before I was gluten-free, and I’d like to figure out how to do it now).

I do think we should consider more narrow dishes than you may have had before. With a quarter to make them , and the folks coming over from CH, I think you’ll see a lot more cooking, and we can be pretty specific about it. Also, I don’t think a dish having been including in a previous category that was more broad should exclude it from consideration. On CH, we had “savory hand pies” and later had “empanadas,” which definitely would have been included in the former dish. There are many more examples of this. So this is why I am nominating sfiha/fatayer even though they would have been included in hand pies.

Are all fatayer small?

I’m asking because I think of fatayer as Lebanese spinach pie, and spanakopita/ banitsa/ spinach burek come in handpie size, as well as larger formats.