Bravo on the vegan anchovy paste!

This was another bake to use up ingredients before I move. In this case, some beetroot tahini and a partial bag of chocolate chips. I did discover that I had already packed my loaf tins, so I baked this in a 20cm square pan, ending up with very tender and chocolatey brownie sized cake.

Other than the beetroot tahini, my only other change was to use all brown sugar and about half the weight of chocolate chips-all I had. It was plenty of chocolate for me.

I am surprised how strongly this tastes of banana. Perhaps because there is not much flour in them. 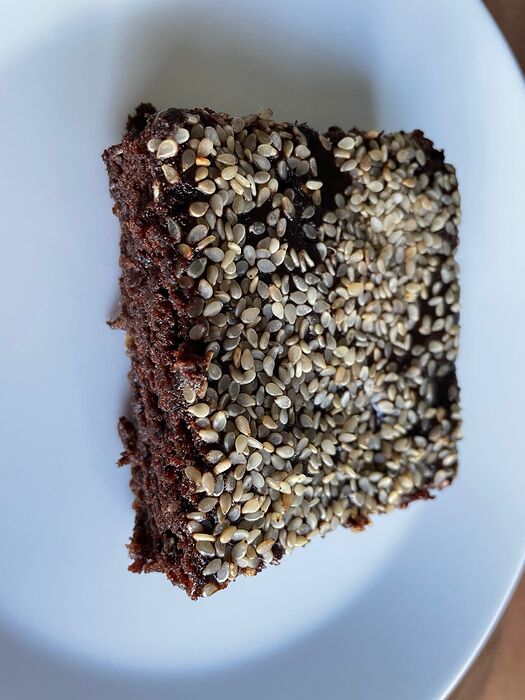 This dish, which bears a resemblance to a Malaysian fish stew, is seasoned with some of the typical Southeast Asian spices. Chopped onion is sautéed slowly in olive oil until beginning to carmelize, then orange zest (I used lemon), crushed garlic, chopped cilantro stalks, and grated ginger are stirred in. Next, mace, ground ginger, ground turmeric, hot smoked paprika, ground cumin, cinnamon, and diced sweet potato are incorporated. I also added fresh turmeric at this stage. Canned tomatoes, tomato paste, water, salt, honey, and a tablespoon of orange juice (I went with lemon) are added and combined. The stew is brought to a boil, covered, the heat lowered, and simmered for 40 - 45 minutes. And it smells incredible. Finally, large bite-sized pieces of firm white fish are added, and allowed to braise for 3 - 5 minutes. I used Petrale sole fillets which were about ½” / 1.5 cm thick.

The recipe says this is four servings, but for us, it was more like six. The stew, itself, was delicious right out of the pot, and it made really good fish tacos the following day. To reheat, I took the fish out, brought the soup to a boil, then let the fish steep until it came up to temp. It’s a great, fail-safe recipe. 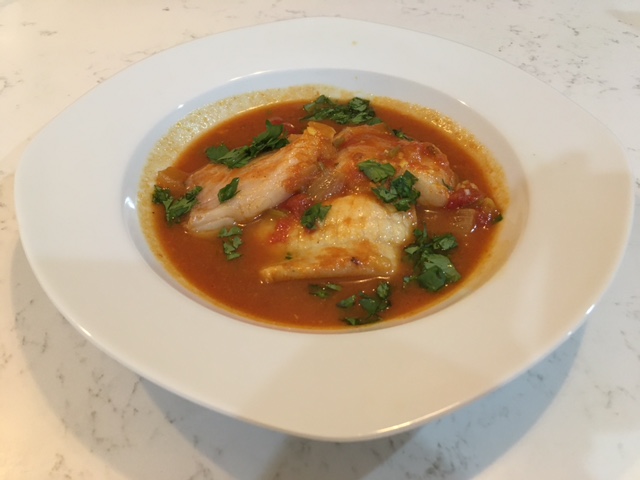 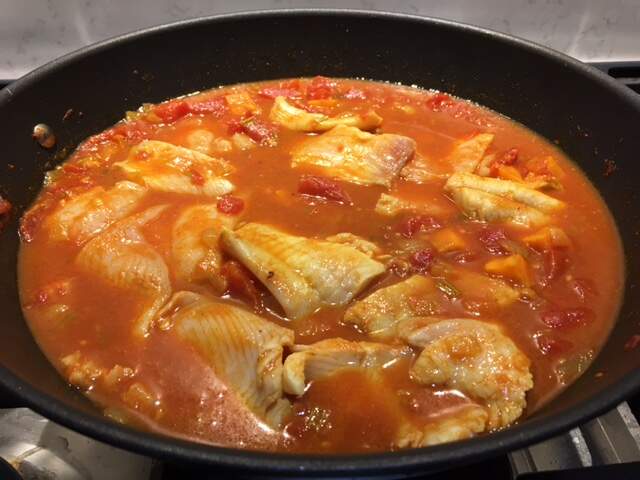 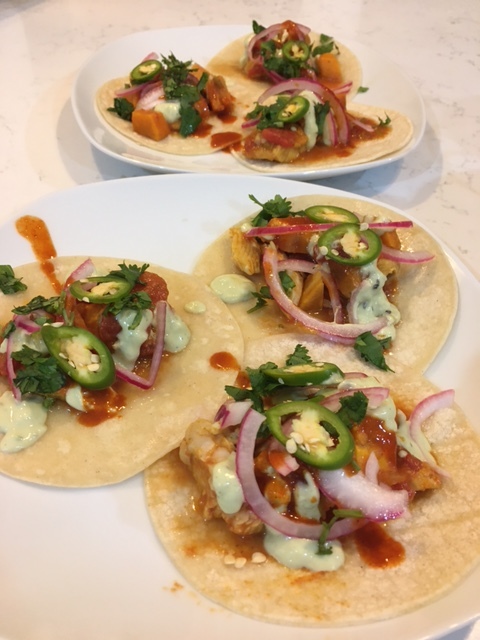 This was exactly the kind of comforting carby goodness I wanted after an exhausting first week back at school. I forgot to pick up leeks so had to make do with a half a red onion. I increased the garlic and used fresh oregano and tarragon from the garden instead of thyme and parsley. I did try browning the breast skin as she recommends, even though I knew I would not eat it. It did brown, but also split and completely stuck to the pot. I ate this in a bowl with a spoon as the chicken fell off the bone when I took it from the pot. Kind of a less brothy chicken noodle soup. Not exciting, but 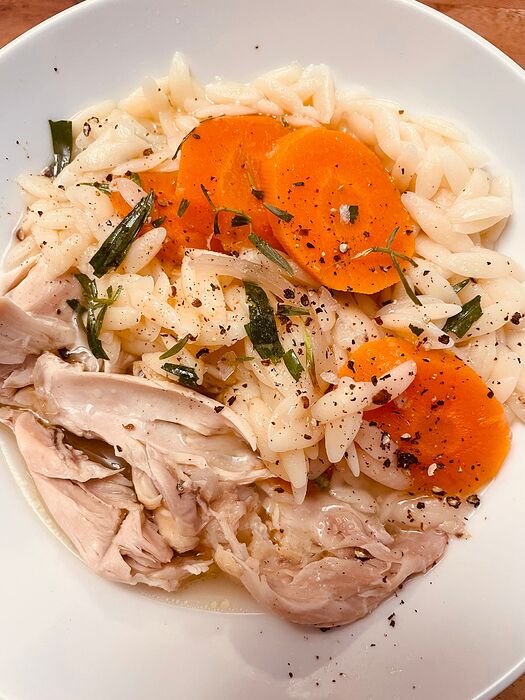 SPAGHETTI WITH CHARD, CHILES, AND ANCHOVIES

I had pasta and anchovies on the mind because a friend’s dad was waxing poetic about a simple anchovy-garlic pasta and it sounded lovely. I decided to go with this version because it included greens.

This is a very simple dish – anchovies are melted into olive oil, garlic and chile flakes added, then the chard stems, and finally the leaves. Then the pasta goes in, plus olive oil and lots of grated cheese.

I made a few substitutions: linguine for spaghetti and choy sum / yu choy for Swiss chard.

This was delicious and quick. Don’t skimp on the garlic, anchovies, or chile – they are all necessary to bring it home in such a simple prep.

I thought the anchovy flavor was too subtle, so I added some fish sauce at the end along with a splash of vinegar for balance. Next time I might also add some pangrattato to finish. 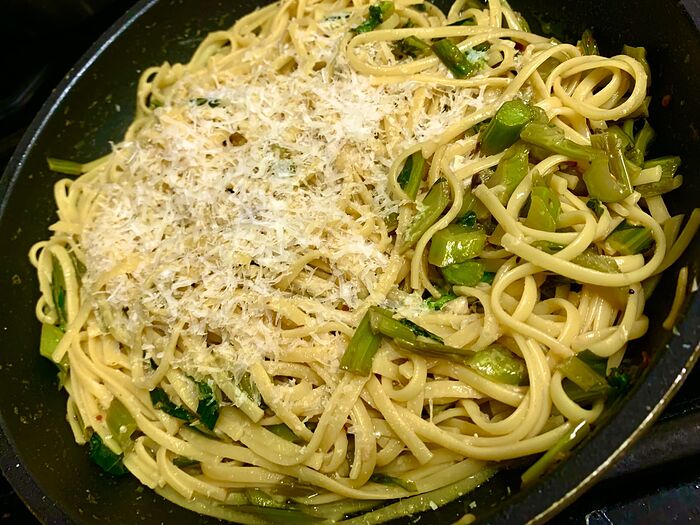 This is a dish of roasted (frozen) artichokes and mushrooms on a bed of arugula.

The artichokes are roasted on their own first, then the mushrooms are added, and after a while olive oil and garlic is added. I thought this sounded a bit fussy, so I tossed the vegetables and oil and put it all to roast, and tossed once midway.

This was good, though I’d streamline and further simplify next time. 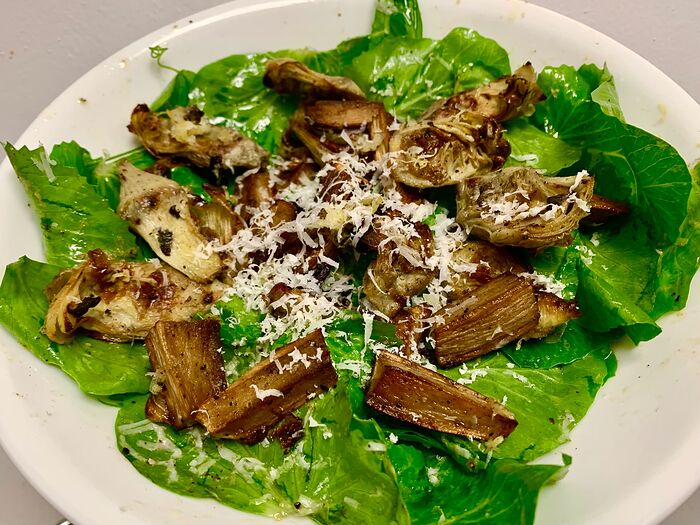 This is an adaptation of a class of intensely flavored, mashed, Bengali dishes called Bhortas / Bhartas - also seen in other parts of India and in the diaspora (Caribbean choka for eg). The Bengali ones are usually heavy on mustard flavor, as this one is.

There is a base of sautéed aromatics – onion, ginger, garlic, green chilli – to which mustard and lemon juice are added before wilting in spinach and breaking up baked fish fingers into the the mixture.

I have yet to use spinach, but broccoli slaw has worked remarkably well, as have other greens.

This is a quick and delicious dish and has been added to my circulation. I usually eat it with rice, and dal if I have thought ahead. I haven’t made the pickled onions yet, but maybe one of these times. 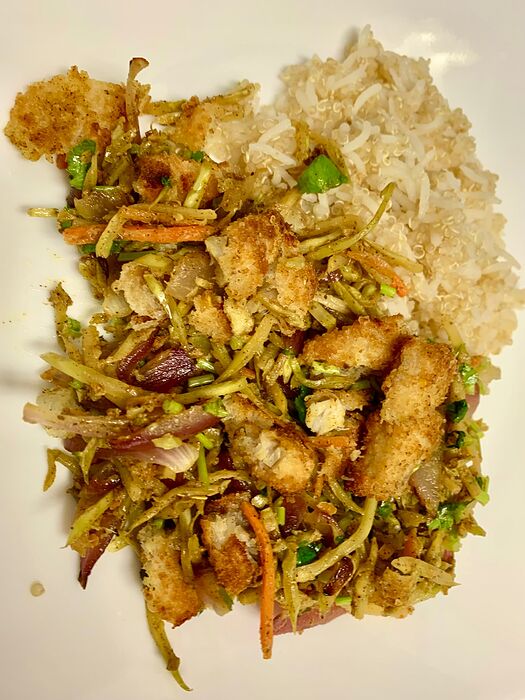 those tacos are gorgeous!

Whenever I’m stuck for a quick, easy dinner I toss whatever vegetable I have on hand (which in dire times is only a can of diced tomatoes, but is often more interesting) with garlic, chilies, and anchovies and serve it over pasta. And it’s always really good.

I had skipped over this recipe for some reason. How do you think it would be over pasta?

I have making a lot more out of this book than I expected, mostly because the rest of my cookbooks are packed and cooking is nice procrastination from packing all the awkwardly shaped things that are left to pack.

This also helped me use up some beetroot tahini, and will be my lunch for the week. It is fine, but I like plain hummus better. I added extra lemon, garlic and tahini. It is a bit runny but may firm up once refrigerated. 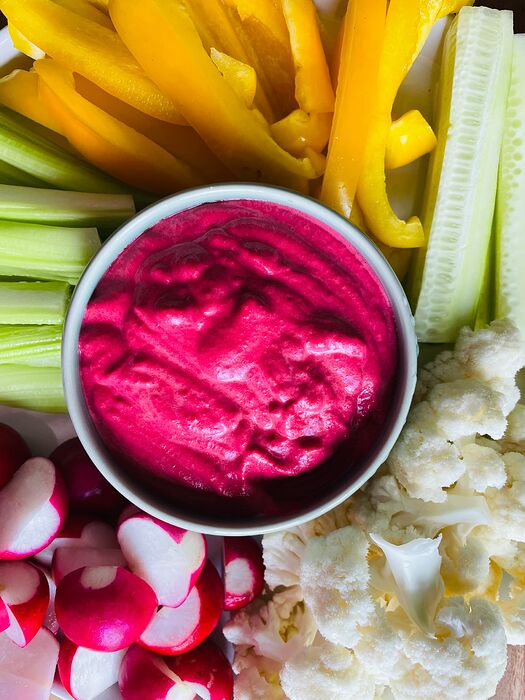 Thank you! Leftovers frequently turn into tacos at the Ramone house.

Brilliant. Here they turn into part of LLD’s eggs as breakfast.

I found the leftovers of this very uninteresting today. My palate is back to normal. A spoonful of chili miso sauce really helped.

Well, I ate it with the anchovy pasta, and that worked well as a combination. But I think just the dish as written on pasta might be a bit lacking in flavor.

Or make the artichokes as a snack or an app (I mean they’re trying to be fried artichokes anyway, who are we kidding) with lemon zest and salty cheese grated over.

LLD and I are recovering from covid, both negative now, it’s been a long 2 weeks of carry out and I wanted something homey. This screams homey. We thought it was wonderful for this purpose. It’s the kind of thing I’d make again if I knew it was going to be snowy. Some thoughts: I’d maybe add a bit more tarragon, but I love tarragon. My two leeks didn’t come close to 5 cups. Just cut the carrots however you want. We loved tons of fresh ground pepper with this in addition to the cayenne, which I used in place of paprika. Timing was perfect for my oven. Maybe one of you can answer this: why does she have you put it breast side up, given that this means part of the breast is not covered? Doesn’t this mean it will be more likely to get just a little dry, which is less likely to happen with the dark meat? I did it her way, but I did wonder about that. Everyone was really happy with this. 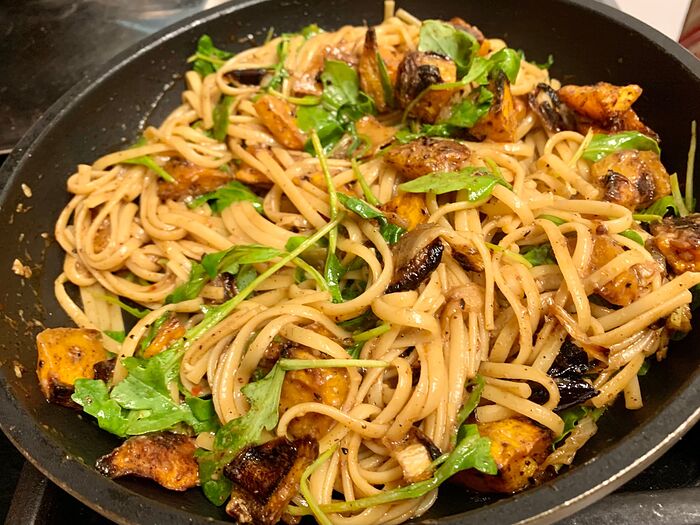 LLD and I are recovering from covid, both negative now, it’s been a long 2 weeks of carry out and I wanted something homey.

I am so sorry that you and LLD were both unwell. I hope that Lulu escaped? I also hope that your cases were mild and soon over.

Here, me, my 89 yo mother, and her helper, all got Covid though vaxxed and boosted - some inconsistent masking I suppose. We had mildish cases that were still 4 days of awful symptoms especially for mother. Got through and are recovering now, though will be dealing with some coughing and fatigue for awhile. Glad that’s over and no worse than it was.