Someone had mentioned the old Eurasian Eatery in Red Bank in one of the other topics. Not wanting to derail that thread, I’ll create this one. I actually have a column on my blog called “Restaurants We Miss”, which usually end up being obituaries to those dearly departed food joints no longer with us. They sometimes get more reads that current reviews of restaurants. I guess people love nostalgia like I do. I will be posting some links to them in the coming days, starting with Eurasian Eatery. What places do you miss?

I was never old enough to fully appreciate the Eurasian Eatery, which was located on Monmouth Street in Red Bank. I feel like I ate there a lot as a child with my parents. They closed when I was in my late teens. It was a small, cozy restaurant which was ahead of its time in terms of the food they offered. An odd mix containing items on the menu ranging from Hungarian goulash and Polish pierogies to Middle Eastern-style Hummus, French crudite, and Asian stir-fry. There were only one or two things young me would order off the menu before I started to become more adventurous. I remember this dish with chicken and grilled onions tossed in a thick brown gravy and served over a massive rice patty, which was unlike anything I had ever eaten at that time, or even now for that matter.

There was a health consciousness here. The food was flavorful and healthy in an unwavering natural sense without sacrificing taste. Well, not everything. Those pierogies were pan-fried to a crisp in butter and served with sour cream on the side. But plenty of options were vegan or vegetarian, and if they weren’t, they would find some substitute for you. In speaking of this vegan food, these were not dishes containing mock meats or some disgusting blending of God-knows-what just for the sake of being vegan, but actual, well-crafted cuisine. It was not medicinal. Even myself, an avowed carnivore could not help but be in awe with what this place could do with natural, organic, plant-based ingredients. For desserts, they had an extensive selection of fresh-baked cakes and brownies, and a large assortment of coffees and teas. You would get your own mini pot when you ordered one.

In a way, I want to say the Eurasian Eatery was hipster before hipsters even existed. They were ahead of their time. The customer base was generally young, but all ages could be seen eating there. The proprietor of the business, however, was not some young, up-and-coming rock-star in the culinary world, but a cute, little old Asian lady who was probably knocking on 80. She must have been something back in the day. By the time we were customers, she was relegated to standing by the window into the kitchen, assembling orders and supervising the chef in the back. It was adorable. She would greet everyone with a smile and a bow her head gently as they entered.

Lol…you and @corvette_johnny!! I had been there a couple of times I wasn’t a big fan of the place but it was unique!

Cool topic. It kind of reminds me of this one

Nj throwback thread, what places would you bring back? New Jersey

Nice list Jr. Do you remember my buddy chris from ashes? He was a bartender there. How about sals in red bank? Do you recall the week when they did the “turn back the clock” nights where dishes were like 1.50 or something ridiculous?

I knew I liked you.

Finally had a chance to read this…great post, @gcaggiano! I’ll throw out two, also from my childhood, both from NNJ (where I grew up):

-Victoria Station in Whippany, which was a small chain (iirc) and they had awesome beef ribs

-The Library in Cedar Knolls, which had a full menu + massive salad bar, and eventually, make-your-own sundaes. In my mid-teens it was the place our parents would drop a few of us at so we could celebrate a birthday on our own (even though it was a ‘grown-up’ restaurant. They had bookshelves lining the walls with a zillion old books.

As an adult, I miss:
-Tabla in NYC
-Blu and Next Door in Montclair
So many wonderful meals at all 3 of those restaurants, and although the chefs have other places, I’m still nostalgic for the originals.

With all the recent talk about the closings of Dish and Lincroft Inn, I figured I would ressurrect this thread. Currently working on a Casey Jones (Long Branch) edition of my blog’s “Restaurants We Miss” column. For now, anyone remember the Don Quixote Inn? 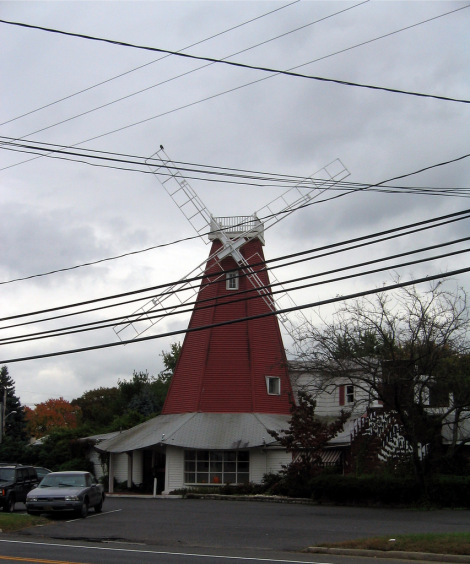 I may have eaten my first steak here. How incredibly rare is it for a restaurant to offer a steak on the children’s menu? The Don Quixote Inn did. Maybe this was their way of trying to introduce younger diners to “adult” meals, I don’t know. There were chicken fingers and maybe a mini pizza as well, but I always went for the steak. It was probably only four or five ounces, but to my young eyes, seemed massive. I do not recall much else about the Don Quixote by way of food, though I can remember exactly what the dining room looked like, and that some of the servers could border on ornery. Readers of this blog know how I have a love for restaurants stuck in time. The places that remain unchanged as the decades pass. For some, like Portuguese Manor, it works and thrives. For others, it’s nothing but a death knell—the reminder that all things must come to an end.

The last time we ate here would have been right before they closed, around 2001. I would have been 10. Don Quixote was already dated by then. The items on the menu which come to mind, the decor of the rooms, the way the servers were dressed, and how things were done. All out of style, if you cared about that sort of thing. There was no basket of rolls and butter, but there was a ball of cheddar cheese and plate of crackers. Hell, that was probably passe by the 1980’s.

From what I can tell, they opened up in 1964. Like Keyport’s similarly defunct landmark restaurant Ye Cottage Inn (which was taken during Hurricane Sandy), the Don Quixote seemed to be a popular spot for banquets and luncheons—these probably carried the business in their near 50 years of operation. During that span, not much changed. They did not move with the times, and finally, ran out of it altogether. The famous Windmill which served as the entrance was a welcome beacon to diners and passersby. You could not miss it. The structure was famous in its own right. People who did not even know what the restaurant was called still referenced, “Oh yeah, that place with the windmill”.

Location, the economy, and the demographics of your customers factor a lot into how even a restaurant with quality food can still close. Their crowd was generally an older one. Perhaps the Don Quixote never quite tapped into the coming generation enough to sustain themselves for another decade. I do not mean this facetiously or in mean spirits when I say this restaurant may have died with some of their customers.

Things finally came to an end in 2001. While it seems the building was used for events over the next few years, the restaurant itself was out of business. I still remember riding by after they closed, looking out for the windmill. In 2007, that local landmark too bit the dust, being demolished with a daycare center built in its place. It’s a shame restaurants like this are so few and far-between.

Taken from my blog here.

It will be making for…Dunkin’ Donuts and an Auto Zone. Thank God. We have none of those around…

It took like 10 years to get a friggin dunkin and autozone. Geez

Lol. Greg do you remember the pumpernickel bread at steak and ale? Wow…I miss that! If some place got bread and butter right, it was that chain.

I had a “bread thread” but it didn’t get much love on here. Maybe you can bring it back to life with some of your wonderful pics

Yes! Of course I remember the bread! For a place that closed when I was 16, I have vivid memories. The bread and soft butter was excellent. That was early into my steak eating days. The garlic butter sirloin was to die for. They even had cinnamon ice cream, which to date, I have never seen elsewhere.

I loved everything about the place. The meals, the atmosphere, the layout and design (there were like four separate dining areas and alcoves, some totally private, some up on a platform. I remember how dark it was inside, almost medieval. They also had one of the best salad bars I’ve ever seen. Cute bar and lounge, but after NJ killed smoking, that area died with it. I did a full write-up of this place a while ago. It was a love affair.

Anyway, where is the bread thread? I’m sure I can come up with a few contributions.

That was definitely a cool place! The salad bar was actually decent too. Check the bread thread out…

So I went to salt creek last night to get a few Carton beers specifically. They have BDG on tap which I love. Anyway, I ordered the pork chop and got some of the bread. I forgot how good the bread is there. Where are your favorite breads? I have to think about it more but a few local spots for me: Char’s pretzel rolls Pastaria has top notch bread Nikos in long branch Not great but when dunked in garlic shrimp juice Costa Verde bread is a real treat! Oh and the garlic/chili Naan at haldi ch…

Add to the list La’ Catena 22 in Bridgewater…wow. When I used to live in Edison this was one of the best fine dining Italian restaurants around, outside of La Fontana in New Brunswick. They had one hell of a run, at least 30 years…the last time I was there though the writing was on the wall. This and Cia Bella around the corner were two of my favorite places in that area. RIP La Catena 22.

Was wishing for What’s Your Beef again last Sunday but settled a very good steak at Raven and The Peach - see my post on their thread for details.

The Fanwood Chippery even though there is a new version trying to recapture the original. I spent many a meal at The Chippery on my way to visit my Uncle. The fish, steak fries, malt vinegar, slaw…good times.

Jolly Trolley Bar & Grill, Westfield was a fun time. Years of meeting up with family and friends. Ate more bar burgers there than I can count.

Really miss the old Chippery. Is there any connection between the Fanwood place and the new Chippery, which is in three locations? After the Fanwood Chippery closed, I made do with Cod Almighty, but then it closed too.